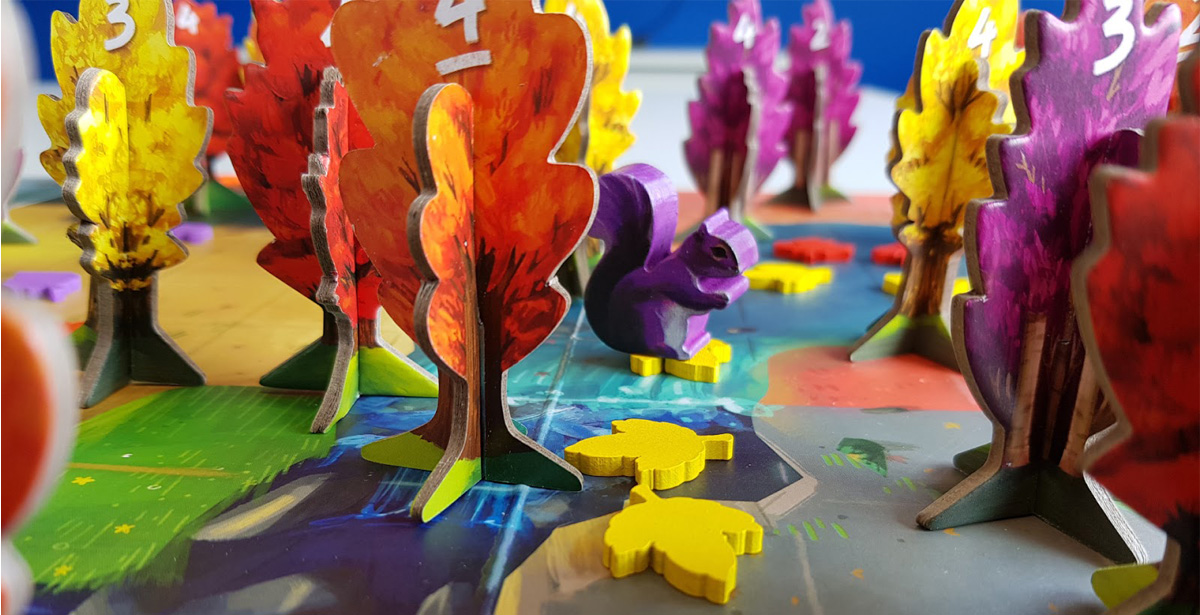 This week I was lucky enough to get my hands on a fairly new game, which came out in July, and is already making a few waves and getting a bit of notice. The game's name is Bosk, and it is probably one of the most visually beautiful games I've seen in a while, with some very colourful and nicely designed pieces, an excellently thought out storage solution, as well as a pleasant and wholesome idea which the game is based on.

The word "bosk" means a grove or wooded area, which is essentially what the game is all about. In Bosk the board game, players control the life cycle and scenic quality of a species of tree in a National Park over the course of a year. In the Spring time, players take turns in placing their trees at key locations along various hiking trails. In the Summer phase of the game, the players then score points based on their placement of trees along each trail, implying the dominance and visual impact to the tourists for that variety of tree during their hike along that path. Autumn is another strategic phase as players take turns spreading out leaves over the various terrain types in the park, according to the ever changing direction of the wind, trying to control the most area of the different terrains. And then, as Winter rolls around, players once more score points, according to their Autumn phase and their respective influence over each of the areas of the park.

I loved the concept behind the game, the thought of designing where your trees will grow, and positioning them in the most effective way to be noticed by travellers walking through the park (and keeping in mind that when Autumn comes you will also need to be able to scatter leaves in the various areas) gives a player a lot to think about and consider. The game can also be quite cut-throat, contrary to the impression given by the scenic beauty of the pieces and the story, as players will try to secure trails, or over run areas with their own leaves, often covering their opponents pieces or intentionally blocking paths. The game also has a wildcard piece in the form of a Squirrel token, which can be used to take control of a square regardless of whether it is currently controlled by another player or not, and no leaves can be placed on top of the Squirrel token thereafter, meaning a player can not only take permanent control of a contested location, but can also completely block an opponent's route in placing their leaves, with a well aimed Squirrel (generally I wouldn't recommend flinging squirrels to strategic points in a forest, so we'll just pretend they went to those spaces on their own). But all the while, the game's idea is still a peaceful one, and for me anyway, seemed to calm nerves and let players rather focus on their strategies than any feelings of evisceration of their opponents. Dead bodies on the trail will not win you any points in this game! 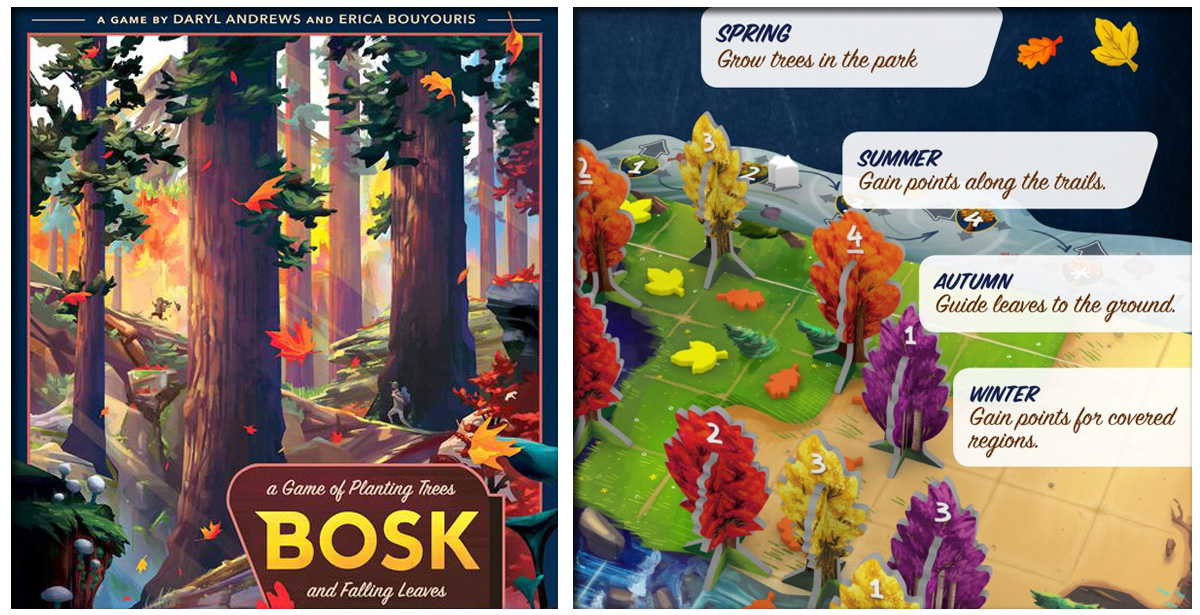 There were some good and bad points to the game, both how it played as well as its presentation. Let me summarise these aspects, just keeping in mind they are my impressions and not all players will think and feel the same.
Starting with the bad points about Bosk, I didn't find too many. The first problems I encountered were in the rulebook. While the rules are actually very simple, some of the wording I found to be a little ambiguous, or not explained at all. For example while they do mention that the trails are represented by the rows and columns on the board, they could have more plainly stated whether these were marked by the lines themselves or the cells between the lines. Once you play it clears that up, but in just reading the rules before a game it can sound confusing. Another issue which I found was, when placing leaves in Autumn, the book does not say that the tiles which represent how many leaves a player will places in that turn should be returned to the box afterward, in other words, each tile numbered 2-8 and the Squirrel token can each only be used once. As above, when playing the game, this becomes apparent, but I just feel the rules should have been a little clearer.

Another negative I found, was that the scoring phases Summer and Winter are not balanced, and I feel they should have been. In Winter, the potential scoring is more than double that of Summer, meaning that a player who aces their tree placement, but fails to score well with their leaf coverage can still come dead last. While a player who has a terrible Spring and Summer but scores high in Winter can quite easily win. Perhaps if players were to place the trees with the second half of the game more in mind than the first it could be a better strategy, but to me it would just feel like the game would flow a little better if both halves were more equally scored.

The game board can also become quite cluttered, while looking beautiful with the different colour trees and leaves, the trees can hinder placement later on in the game as players try to manoeuvre their fingers around the objects, and as players try to control a square the stack of leaves can topple easily which can then become confusing as to what was where. This is a trade off however, as the game stands out as such a picturesque representation of the park in which a player is growing their trees, and I think the visually appealing factor of the game is what can really draw people to it. I'd rather players tried to be more careful when placing their pieces so as not to knock things over, than to take away the breathtaking appearance of a board full of different coloured trees and their fallen leaves. One should also keep in mind, that while the pieces are very well made, sometimes in taking them from the sprue they could become damaged if care is not given to remove them gently. 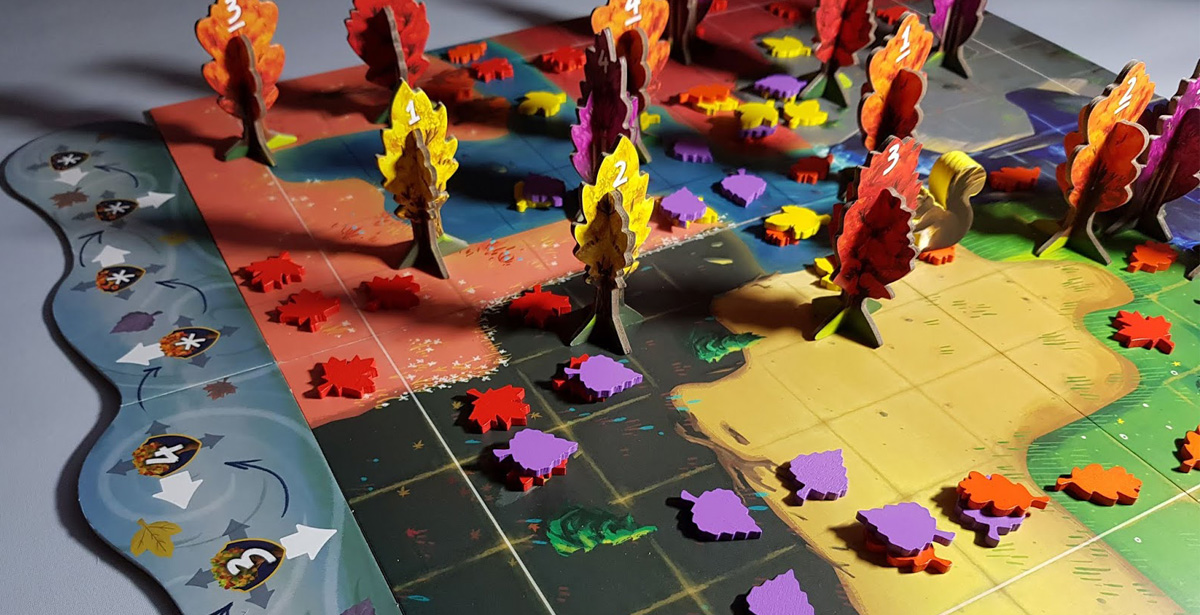 The positive aspects of the game for me were far more plentiful. The game's rules are simple, but its strategies can be quite intricate, which is always a bonus I feel. The rulebook has a summary page on the back, something I feel should be a standard in games that require players to remember turn sequences or refer to charts, but which lots of games leave out. The box comes with specially made dividers as well as zip-lock bags to keep all the different colour pieces in their own compartments and thus making setup quick and organised. I feel there are a lot of strategies to consider within the game, and these will need to be altered on the fly according to how your opponents play their turns, which keeps the game active and fluid. While each player's turn could become long (one might wish to house rule a time limit if this drags on) as the player considers their best move, each move will affect the other players' strategies so that they will probably need to be paying attention instead of just waiting for their own turn; as I said, the game does feel very active and fluid for me.

But I think the biggest positive with Bosk is how the game looks. From the colourful pieces, to the 3 dimensional layout, to the little bits of trivia within the rulebook, Bosk lets players enjoy the scenic wonder of exploring a beautiful National Park when they are unable to leave the table, and have a challenging contest for victory at the same time.