Shadow Tactics: Blades of the Shogun

A Gorgeous, Tough, Fun Take on the Commandos Formula 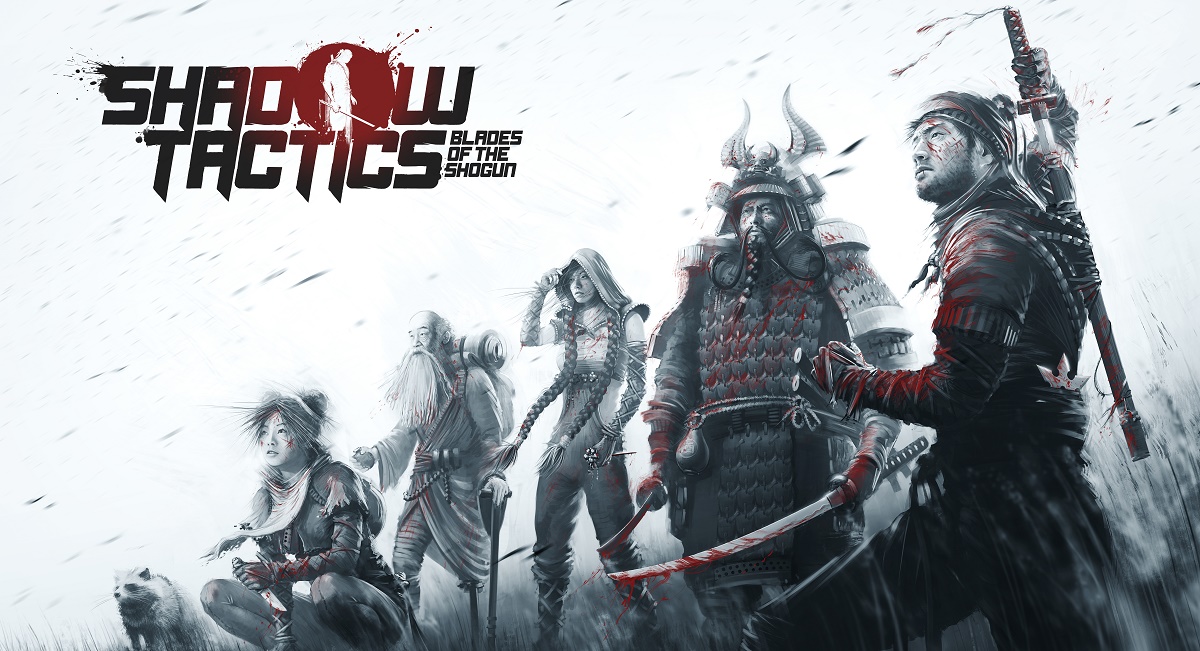 Shadow Tactics released on PC in December last year. It caught my eye as it was a colourful isometric, squad based tactical strategy game. Very much in the vein of Commandos or even the classic Syndicate Wars. Making it more attractive is the setting during Japan’s Edo period and the loose basis in the historical struggle of the Shogun to maintain the fragile peace and unity that he fought a number of wars to achieve.

The plot is fictional as you lead the samurai Mugen in his mission to uncover the identity and plots of the mysterious warlord Kage-Same, who seeks to overthrow the Shogun. Joining Mugen is the ninja Hayato, thief Yuki, spy Aiko and sniper Takuma. Each character has specific skills that will be needed at various points in the campaign for you to successfully complete the missions.

The gameplay is simple, get from point A to point B while accomplishing certain goals along the way without losing any of your team. Within that simple mechanic is where the complexity arises. You have multiple routes to choose from as well as multiple ways to tackle the obstacles in your path. Do you distract and sneak past the guards, soldiers and civilians or do you look for ways to take them out by either killing them or simply knocking them out? Do you cause a distraction with a whistle, a bottle of sake or by using the environment? The permutations can seem daunting and nearly endless, but they are easy to spot. If you are patient. 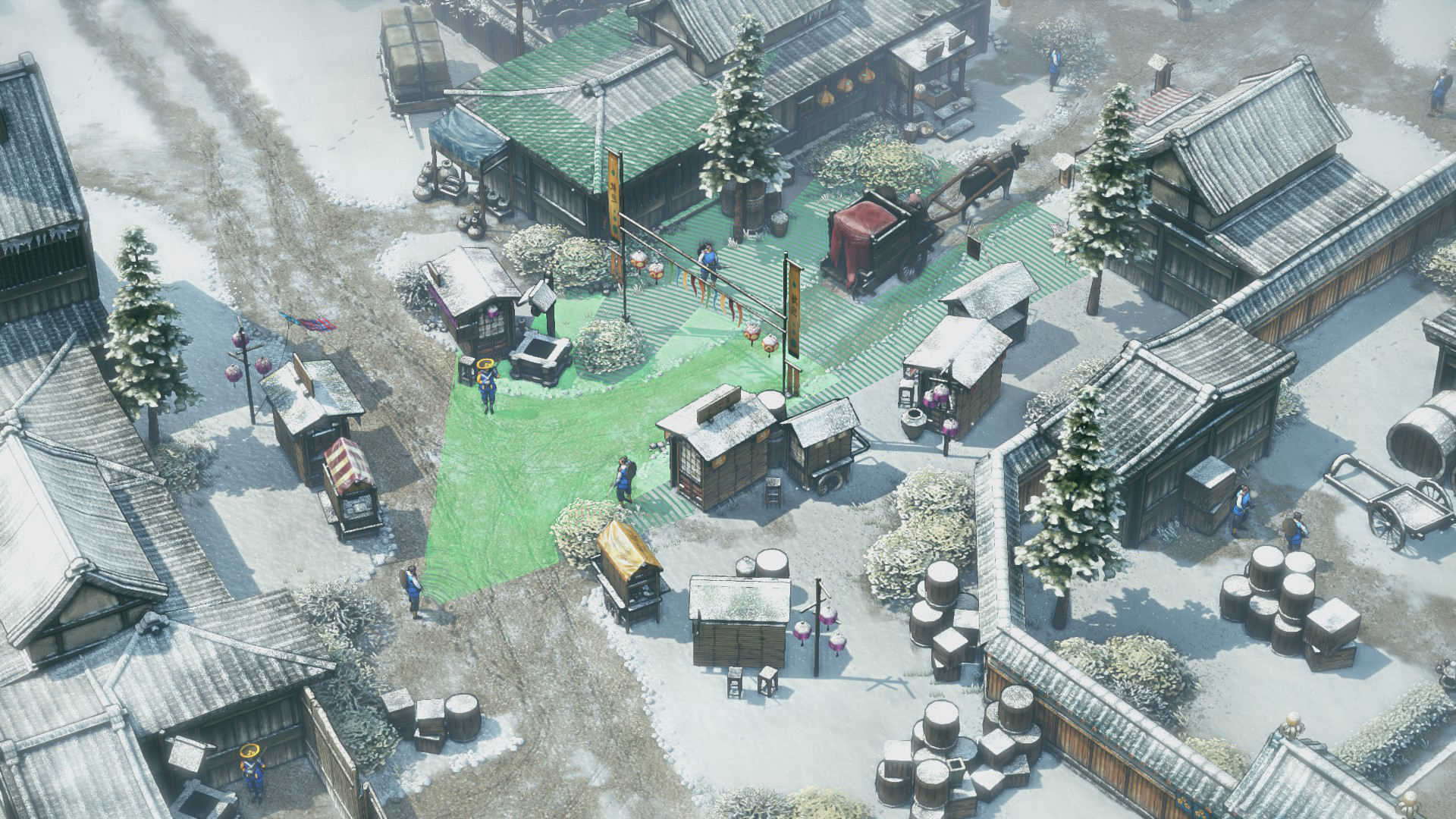 My first play through on PC of the first mission took me over an hour. Initially I was rushing through the level as I would in an action game. That was a mistake, foregoing stealth resulted in many deaths, thank goodness for the quick save and quick load mechanics. By not surveying each section of the level, identifying guards and civilians who can call guards as well as their lines of sight and patrol patterns I was simply asking to be discovered and killed.

Once I learnt this painful lesson, one you can watch on the Nexus YouTube channel, I tackled the level on the XBox One. This playthrough, obviously went faster as I knew the areas well enough to not make the same mistakes. I had learnt to be patient and use the various skills of the characters as well as Shadow Mode to co-ordinate my movements and attacks with efficiency to minimise detection. Shadow Mode is basically a limited stack actions mechanic. Using Shadow Mode you can assign one action to each character so as to co-ordinate a strike. It’s best used when you must distract or take out multiple guards with overlapping sight-lines. An attack on any one at a time will result in your detection by the other. 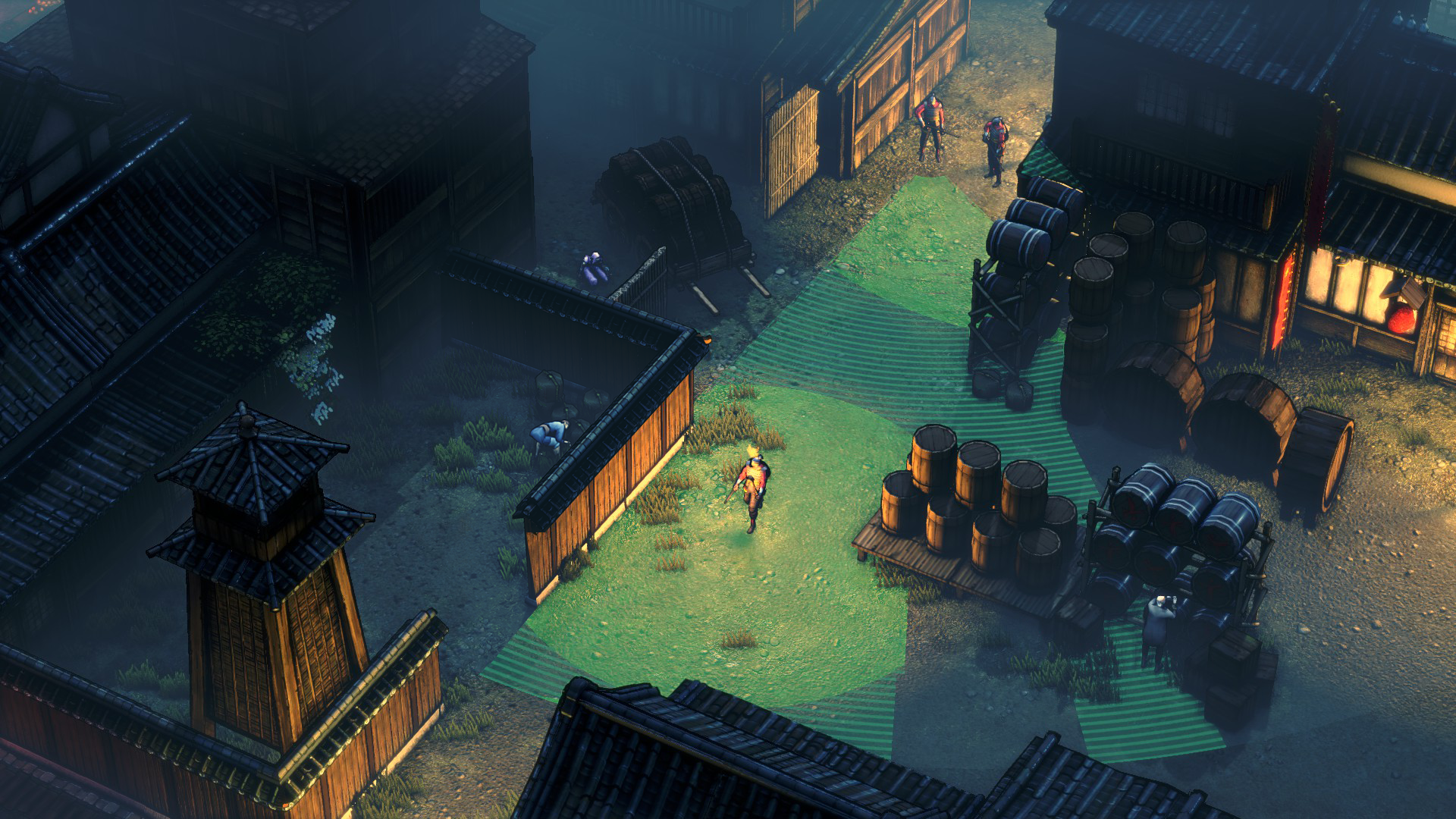 Shadow Mode is welcome and necessary, but could be more robust. It requires your characters to be right next to each enemy to carry out the actions undetected. You cannot for example use Shadow Mode to tell one character to move undetected through a sightline when the enemy pivots away and then into cover for instance. The execution of Shadow Mode is simultaneous, you cannot stack actions or time them. For instance at the end of the first mission you cannot use Shadow Mode to tell Mugen to drop the gun powder barrel at the gate and only once it is in place have Takuma shoot it. If you set up the two actions Takuma will shoot as Mugen drops the barrel invariably having Takuma shoot too early and miss. 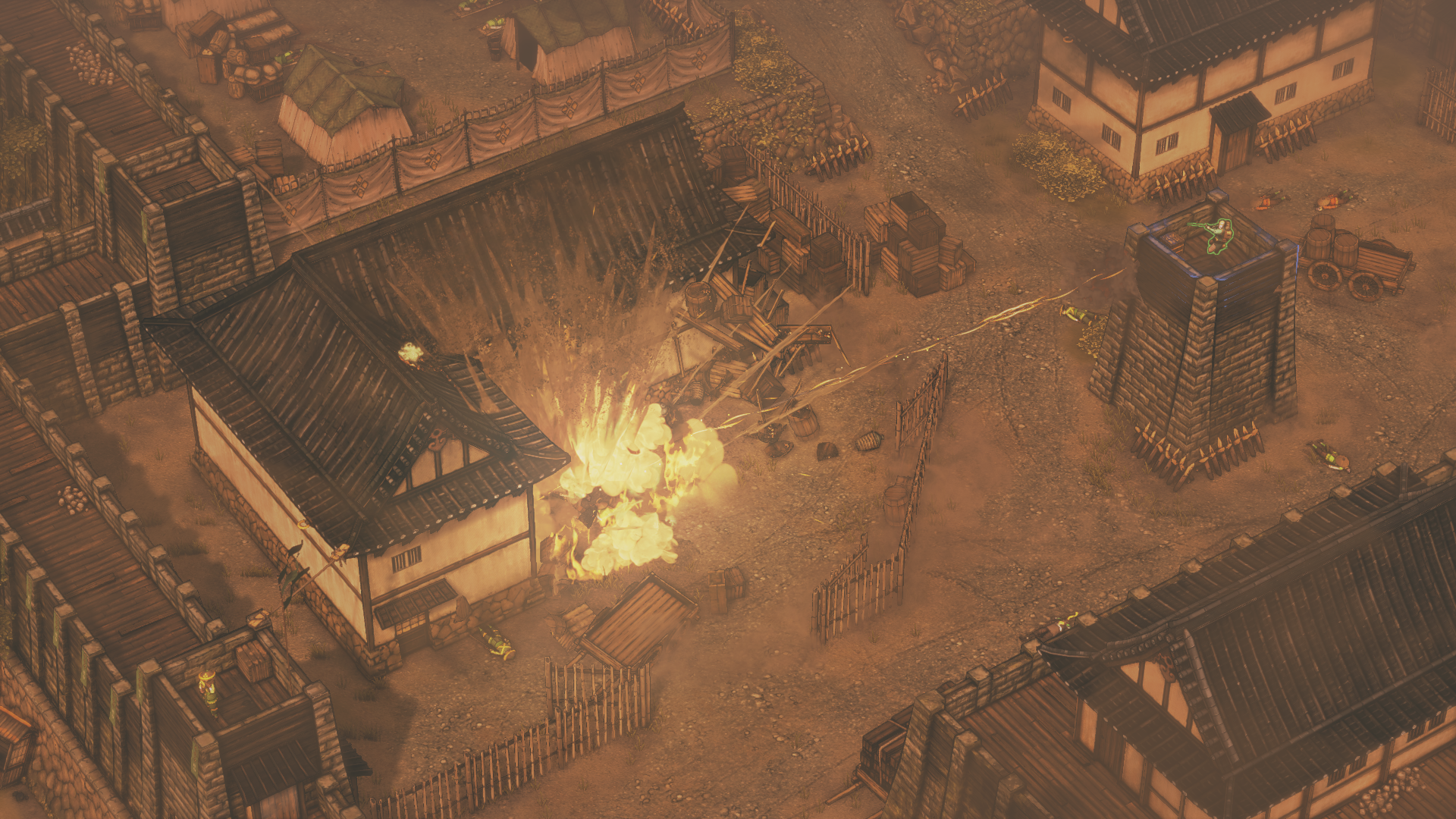 In terms of control schemes, I prefer the mouse and keyboard, you have more control over map scrolling, and precision. I also found that if I am in cover and want Hayato to use his shuriken I can give that command from behind cover and he will execute it by moving out of cover automatically and throwing. On XBox One I have to move him out of cover and then give the command, giving the enemy an extra second or two to detect and possibly raise the alarm. Your timing has to be spot on to kill him before he does can raise the alarm.

On PC I would recommend that you spend some time remapping the controls as the default key bindings have the map scrolling keys mapped to the Arrow keys and most commands to select abilities to the WASD section of the board. This means that you must either scroll along the map with the mouse of take you hand off the action keys and move them across to the arrow keys. Because your characters accept movement commands via left mouse you don’t want to take you hand off the mouse. I mapped map scrolling to WASD, keeping rotation to Q and E with character select kept to the top row number keys. Abilities are mapped to R, T, F and G. and the rest kept as is. Hand travel is minimised so I am more efficient and things are easier.

Having said that the implementation of the controller is near perfect. The buttons are intuitive as are the movement controls. This is more my own fault, but I tend to use the camera as I would in a shooter constantly adjusted the camera as I move, thus ending up moving the character and camera in opposite directions resulting in the character sitting off screen with me unable to see what I am doing and possibly exposing them.

Once I was used to the controller scheme, I stuck to the XBox version as who doesn’t love sitting on a comfortable chair and playing on a fifty inch TV? My experience was near seamless, the later levels played exactly as I expected them to. My camera control was atrocious, not the game or controller’s fault, just mine. Switching between characters was a simple press of the right trigger, with the right bumper cycling through each character’s available actions.

Graphically the game is impressive, even for a Unity Engine game. The colour palette is bright and varied and the character models detailed enough for you to easily identify civilians and enemies. Given that you never zoom right in the character models don’t need to be that detailed. The one area of slight criticism is that all the enemies are generic. While this makes it easier to pick them out, each Straw Hat is indistinguishable from the next, as is each foot soldier and each officer. 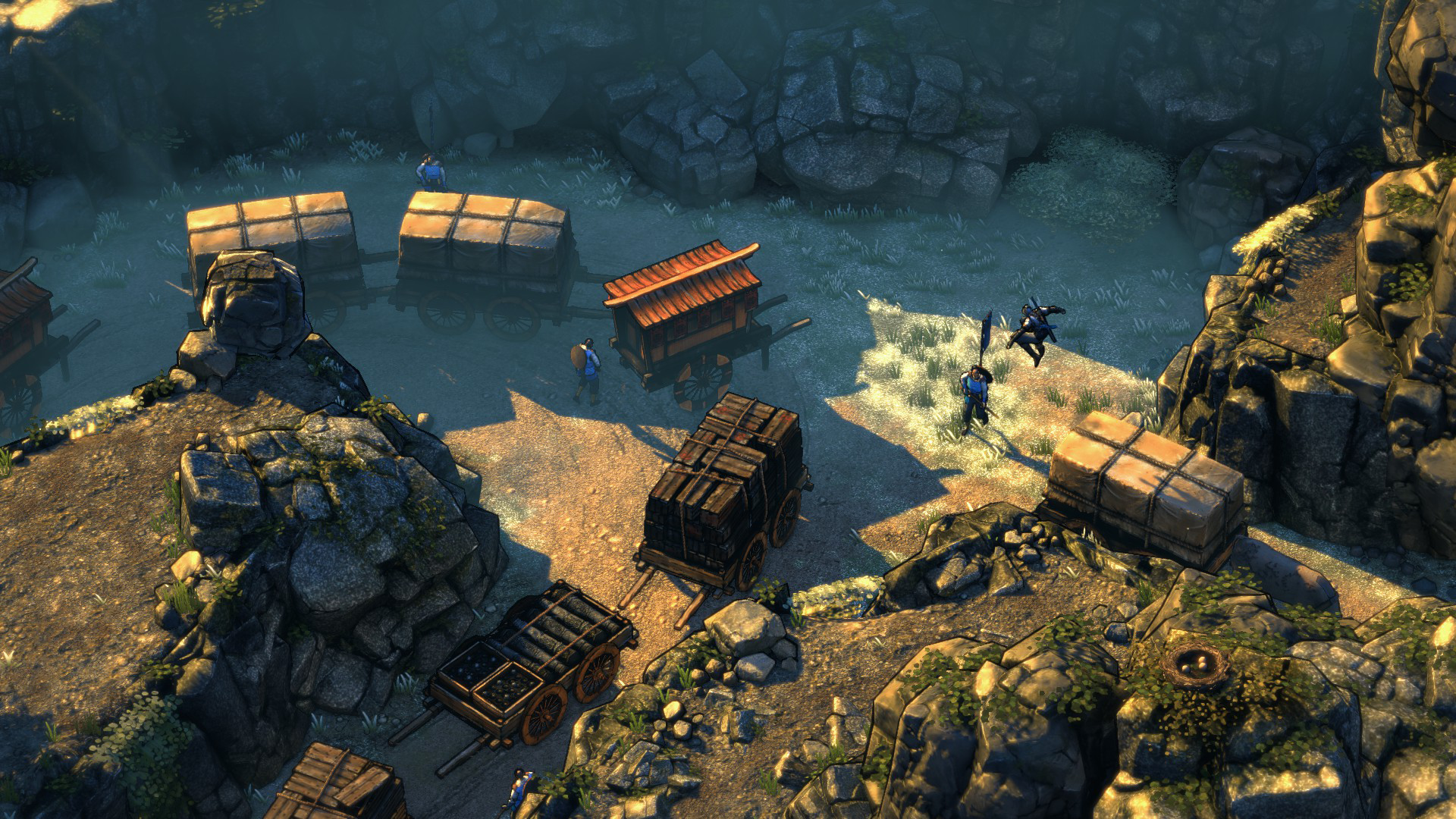 Environments are gorgeous, from snowy towns, with footprints giving enemies a clue as to your location, to heavily forested areas full of different green hues to dusty backwater towns. You will never lack for visual diversity. The maps themselves are relatively simple with your characters operating on two planes, ground level and one story up. This plays a crucial tactical role as you can sneak past most enemies by sticking to rooftops if you are crouched. On the ground you will be scanning each section of the map for obstructions, shadows and bushes that break line of sight and enable you to hide bodies.

Speaking of hiding bodies this is crucial as leaving them in the open triggers alarm and a search pattern by whoever finds the body. Pleasantly, and something more games need to implement, is the fact that if you kill and hide the body of a static enemy a patrolling enemy who interacted with that now deceased soul will notice that he is missing and will enter a search pattern.

On the sound design side, the kill noises are suitably visceral and gruesome as your swords and other weapons slide into a body. The voice acting is excellent in both English and Japanese. For a game developed in Germany it is an admirable attempt at adding an extra layer of authenticity for the game to allow you to listen to a Japanese voice cast.

Shadow Tactics is my new favourite game of 2017, a year late on the PC front. If you enjoy stealth and tactical games and even some Japanese history I suggest that you pick it up. The game can be tough as nails and the temptation to rage quit when nearly an hour of progress is lost because you saved in the wrong place is there, but the satisfaction when you get things just right will soon have you coming back for more.

Crucially the game will not break the bank and the hours of enjoyment you will have as you sneak and assassinate your way across the game world makes this worth every single penny you will pay.

Each playable character is distinct.

Default PC controls are not optimised 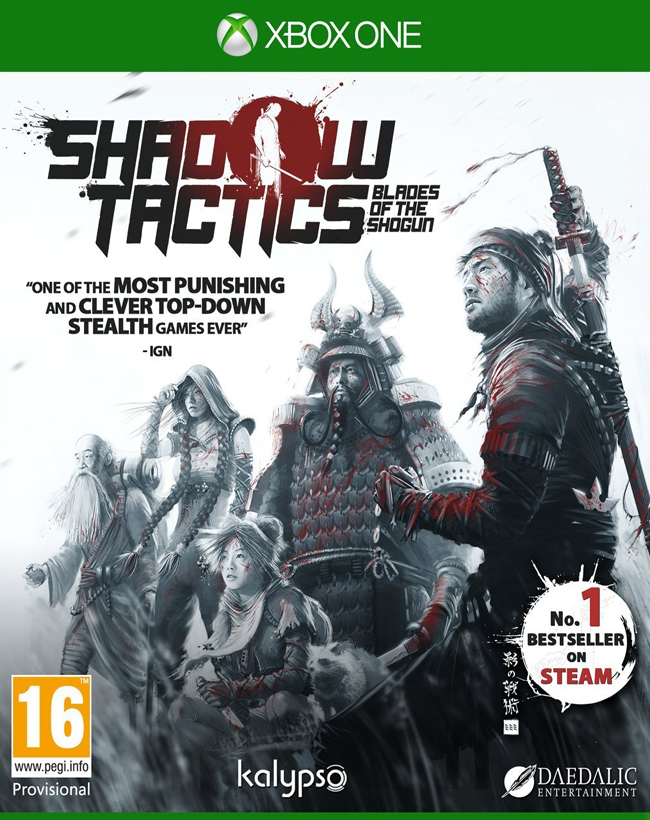