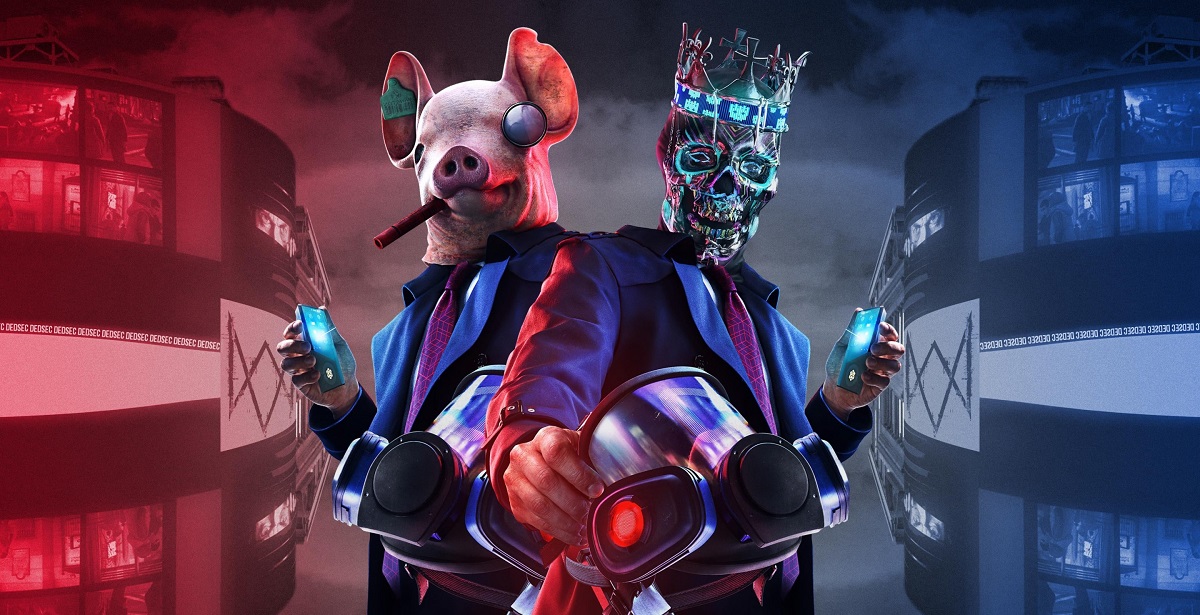 Watch Dogs: Legion from Ubisoft is the third instalment in the franchise and one that seeks to take it to even greater heights. Does it manage to do this though? That answer will depend entirely on if you enjoyed the original Watch Dogs and Watch Dogs 2 a few years back. 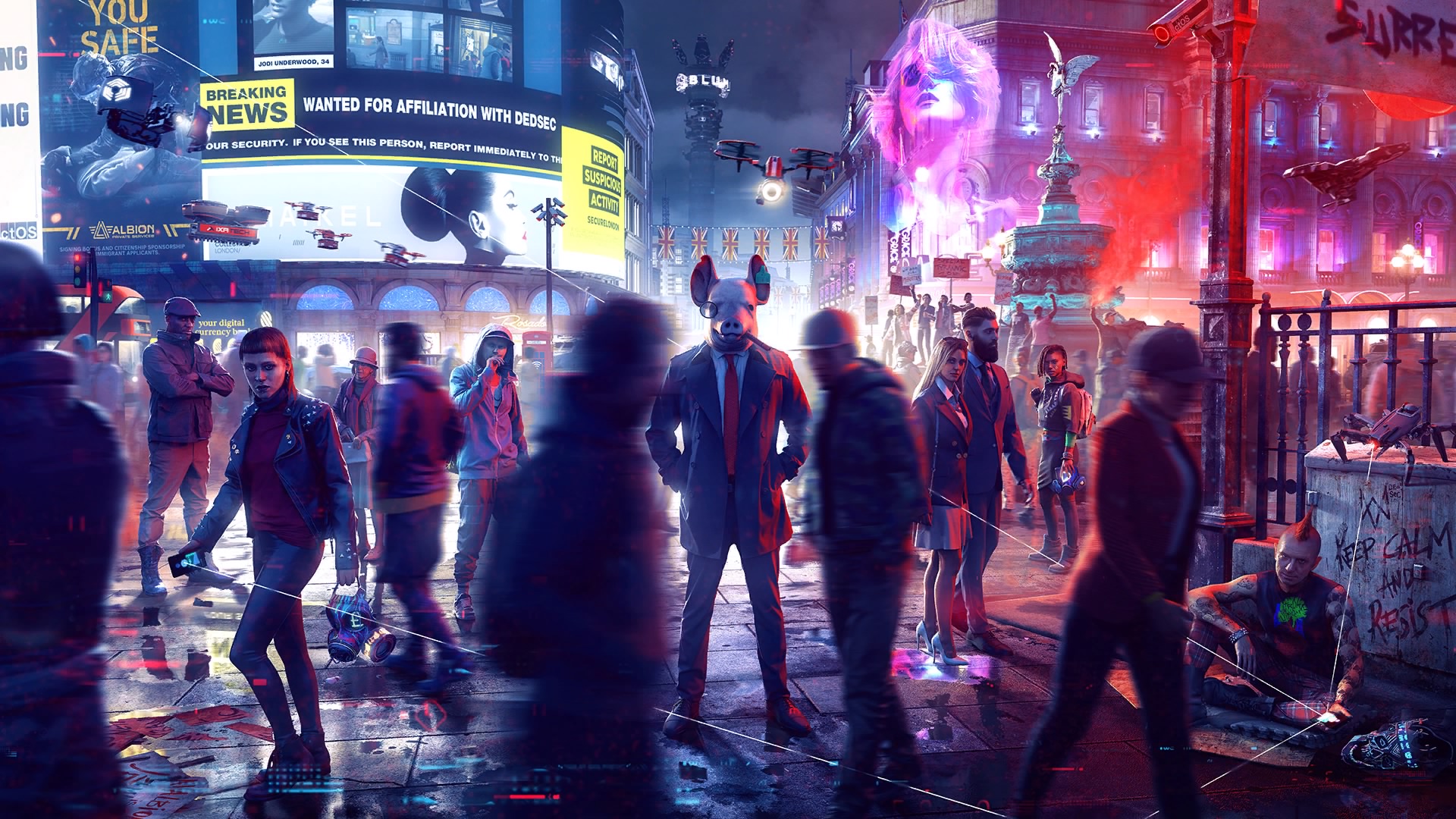 In Watch Dogs: Legion, players will take on the role of Dalton Wolfe at first. Dalton has infiltrated the British parliament building’s underground levels and discovers a room filled with explosives. Around these explosives are a lot of propaganda and “Deadsec” materials. Deadsec, for those unfamiliar with Watch Dogs, is the name of the hacker group that players work for and with in the franchise. Dalton eventually disarms the bombs but a mysterious figure known as Zero Day still manages to detonate the explosives below parliament and multiple more at other locations around London. Dalton is killed and London is thrown into disarray as the UK Government doubles down on hiring a private military corporation known as Albion to start enforcing law around the city. Deadsec is blamed for the explosion and is labelled a terrorist organization while London enters a state of disarray.

Sabine, the last remaining member of Deadsec recruits you, the player, into their group and this is where Watch Dogs: Legion really kicks off.

Deadsec’s headquarters also just happened to be raided on the night of the explosion and all but one member remains. Sabine, the last remaining member of Deadsec recruits you, the player, into their group and this is where Watch Dogs: Legion really kicks off. Players will pick from a pre-determined range of citizens that the game generates. Each of these citizens have their own perks to them. Some can hack faster, others have access to their own special personal vehicle etc. So depending on who you pick at first, you may or may not have a certain advantage in earlier missions. Opting for a stock photo model with access to a sports car certainly did come in handy. 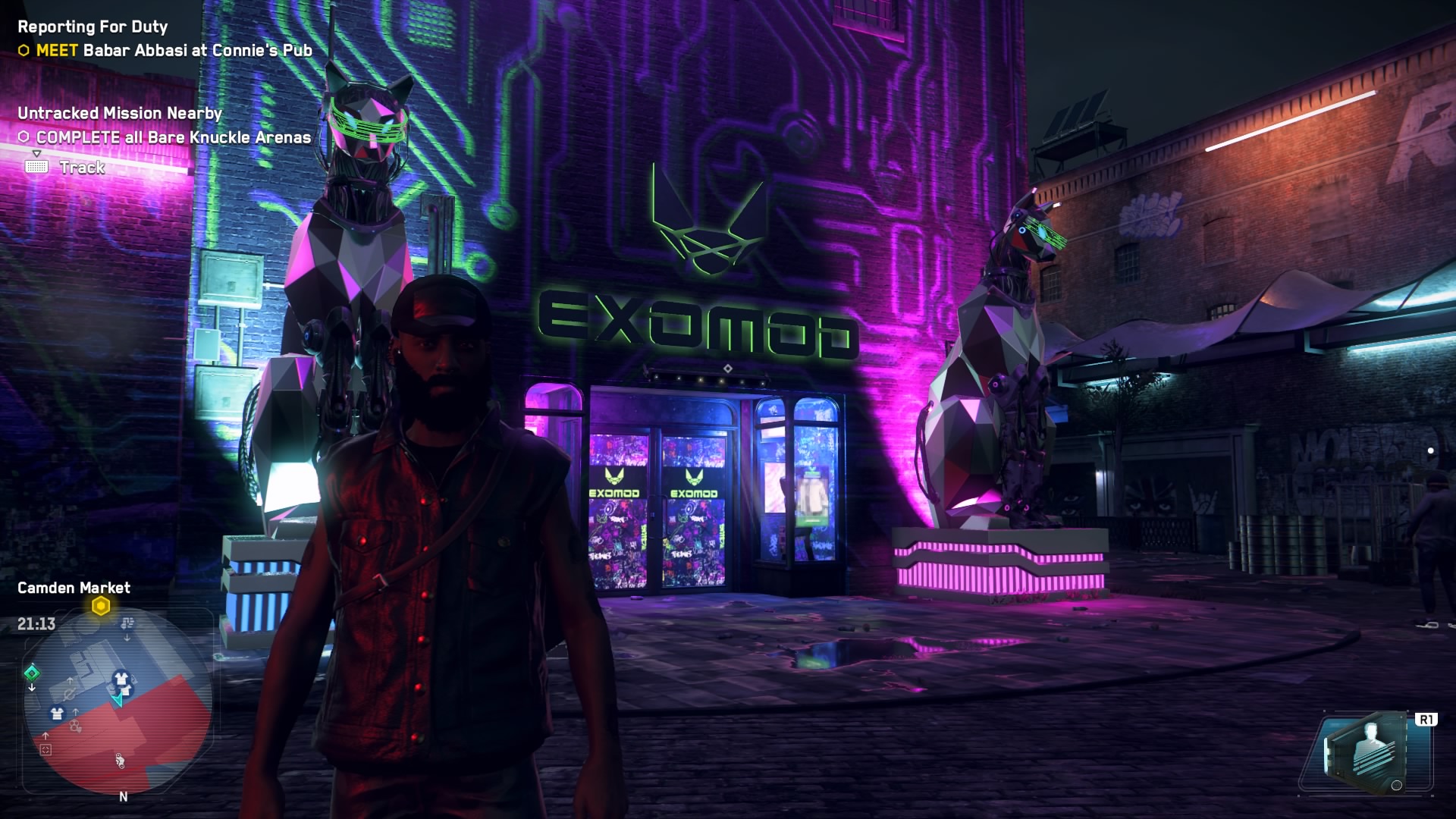 Once recruited into Deadsec, Sabine gets you up to speed with the event that transpired in London since Zero Day triggered the explosions. You reactivate Deadsec’s artificial intelligence Bagley and you’re tasked with rebuilding the hacker group to its former glory to take back London from the control of a fascist government military organization and gangs that have taken over. No pressure huh?

Recruiting new members in Deadsec is quite easy in-game. All you have to do is approach anyone in the street or in buildings, scan them and mark them for recruitment. If they can be recruited at that point in time, you’ll approach them, spark up a conversation and be tasked with doing something for them in exchange for them joining Deadsec. Some of the recruitment missions are downright amazing including busting out an immigrant from a police station or stealing a truck of fake passports that’s in the hands of a gang. The recruitment missions alone make up a large chunk of gameplay and players will easily spend hours in-game doing these while they build up Deadsec. 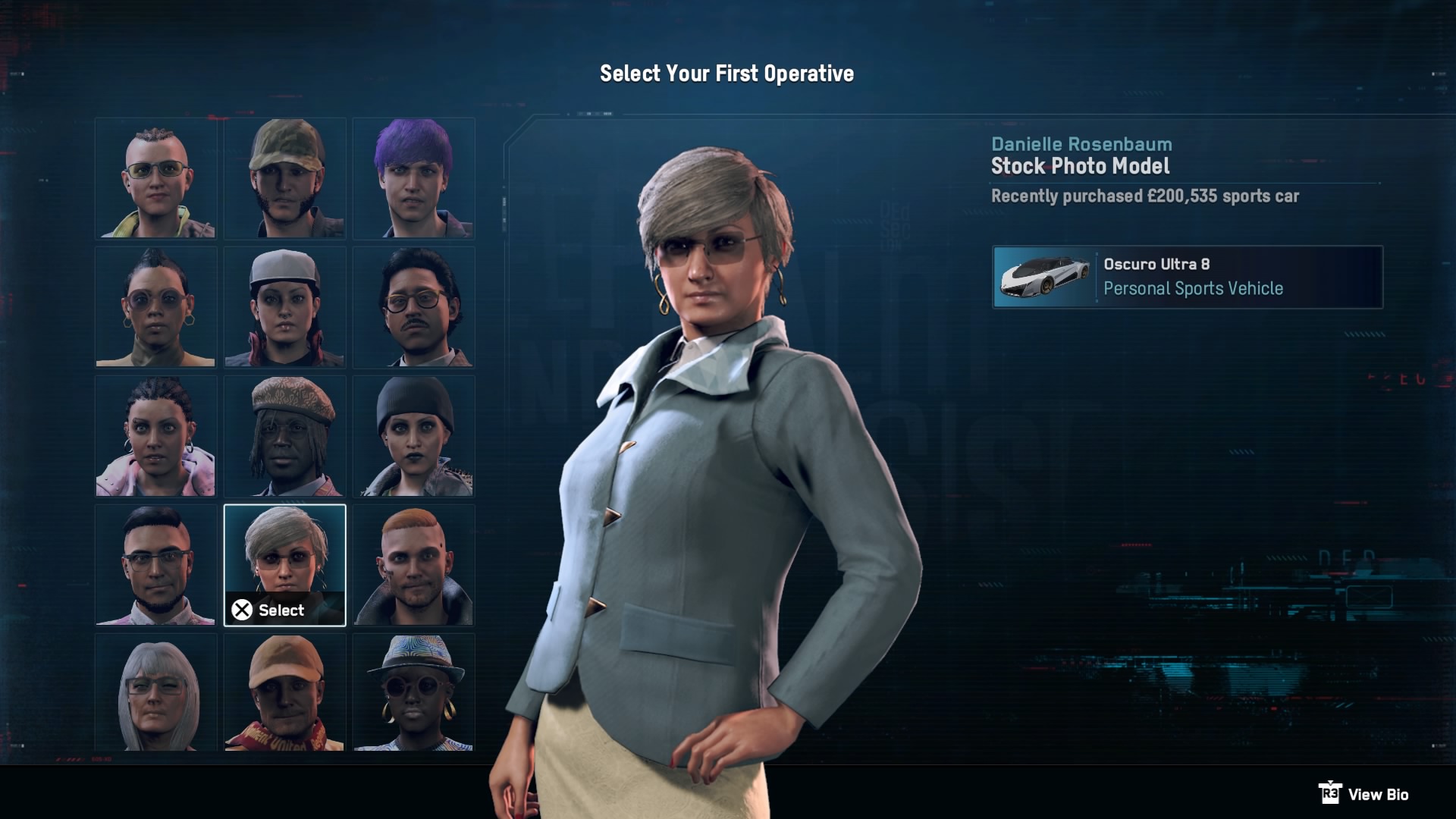 Players can swap between recruited Deadsec members at any time in-game except when within restricted areas. Swapping between recruits does trigger a loading screen on PS4 and takes around 10-15 seconds. Your other recruits will wander off and do their own thing while you play as one of them. Sometimes this can be detrimental though especially if your recruit has the “Death wish” personality perk attached to them. Be wary of these people. Especially if you have “Permadeath” enabled.

Your other recruits will wander off and do their own thing while you play as one of them.

Speaking of “Permadeath”, this needs further explanation. With permadeath enabled, players will lose operatives forever if they die. Lose all your Deadsec operatives and it’s game over. It effectively serves as an additional layer of difficulty for the game and while it’s not impossible to get through the game without dying, permadeath adds an additional layer of stress to the title which makes you question your actions even further before rushing in guns blazing. Thankfully, you can disable this from the options menu should you be so inclined. 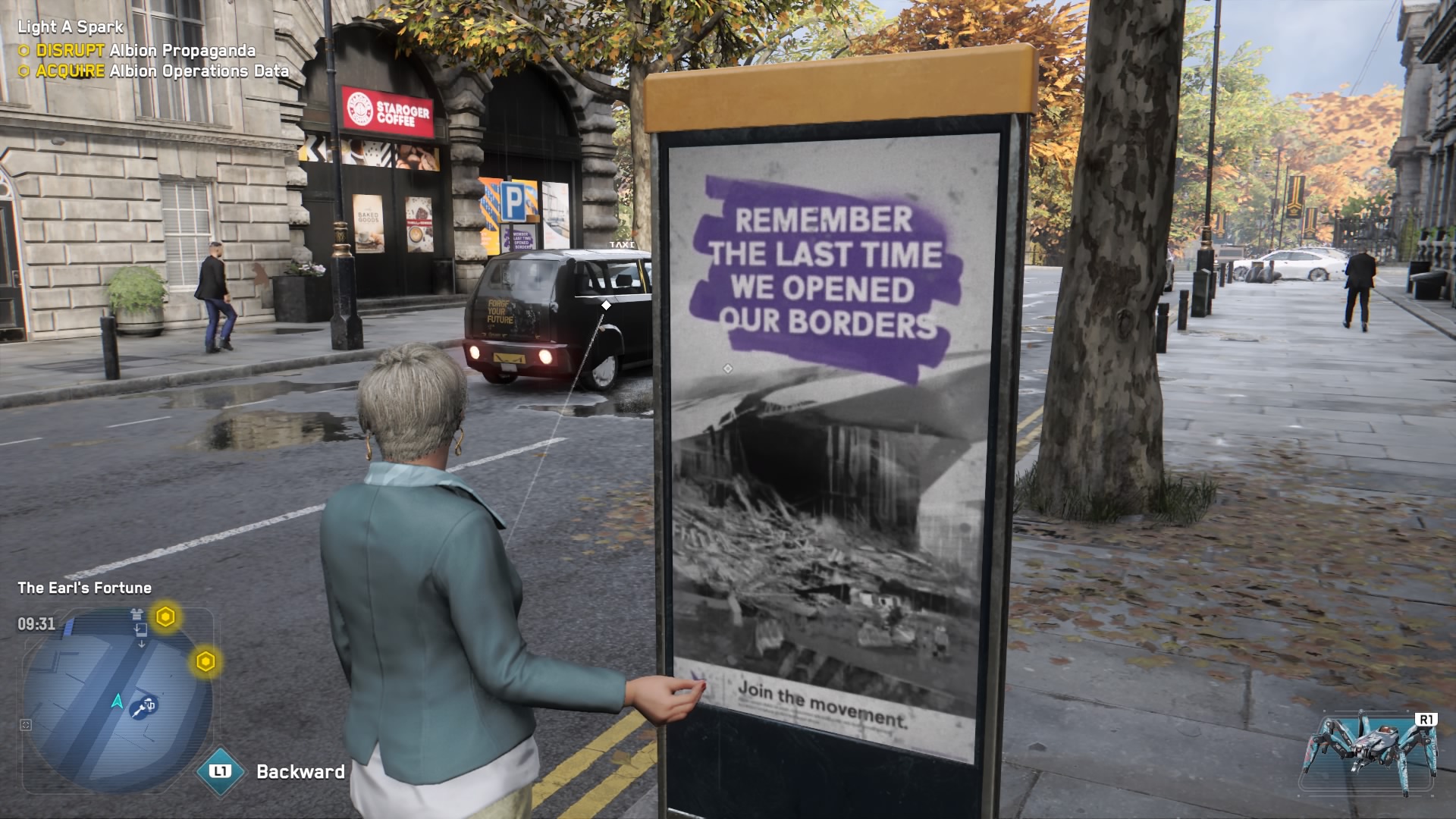 The main story of Watch Dogs: Legion is quite long and is broken up into chapters. Each chapter plays out with a series of main missions that you and your Deadsec recruits have to complete to learn more about what’s going on in London and who exactly Zero Day is. Each chapter pieces together a puzzle of sorts with regards to the story but it does so at a glacial pace that allows you to freely explore London and do other things such as the numerous side missions.

Of course, being a Ubisoft game, there are districts to free and multiple collectibles in game. Players will have to seed enough dissent in each borough of London to “free” them from the clutches of Albion. Doing so unlocks more perks and special recruits with unique skills such as being able to summon a construction drone or hack in a wider range. Therefore, players are actively encouraged to do the side missions and “free” London while sidelining the main mission in order to become stronger as Deadsec in general. 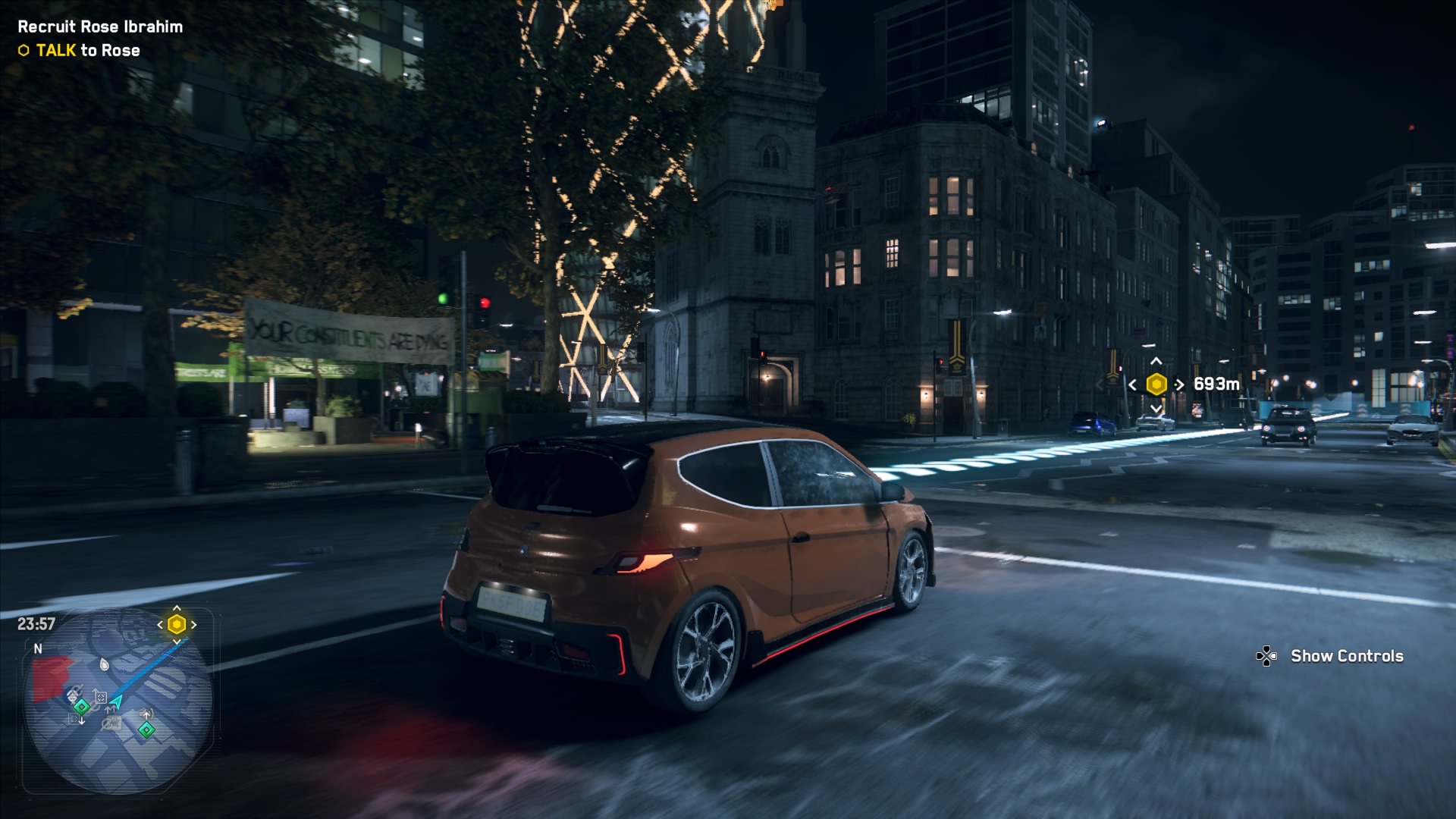 Players in Watch Dogs: Legion can also put up propaganda wall murals and these serve as a way to generate ETO or currency in-game. There are numerous locations scattered throughout the game where you can put up wall murals and you can choose from a range of artworks to put up. Some of these are really gorgeous and a lot deliver a clear message that Deadsec is not dead just yet.

New to Watch Dogs: Legion is the ability to trigger an “Autodrive” mode in 4-wheeled vehicles which can be used to take you from Destination A to Destination B while you sit and listen to the radio.

Gameplay itself in Watch Dogs: Legion plays out very similar to its predecessors. Players will control their Deadsec recruit in third person mode and can aim, shoot and take cover. They can also hack multiple devices by scanning with the L1 button and pressing the appropriate face button. Standard fare really if you’ve played any of the previous games in the franchise. Melee fighting is slightly lacklustre with a lot of button bashing taking place in game as you throw punches and kicks. New to Watch Dogs: Legion is the ability to trigger an “Autodrive” mode in 4-wheeled vehicles which can be used to take you from Destination A to Destination B while you sit and listen to the radio. 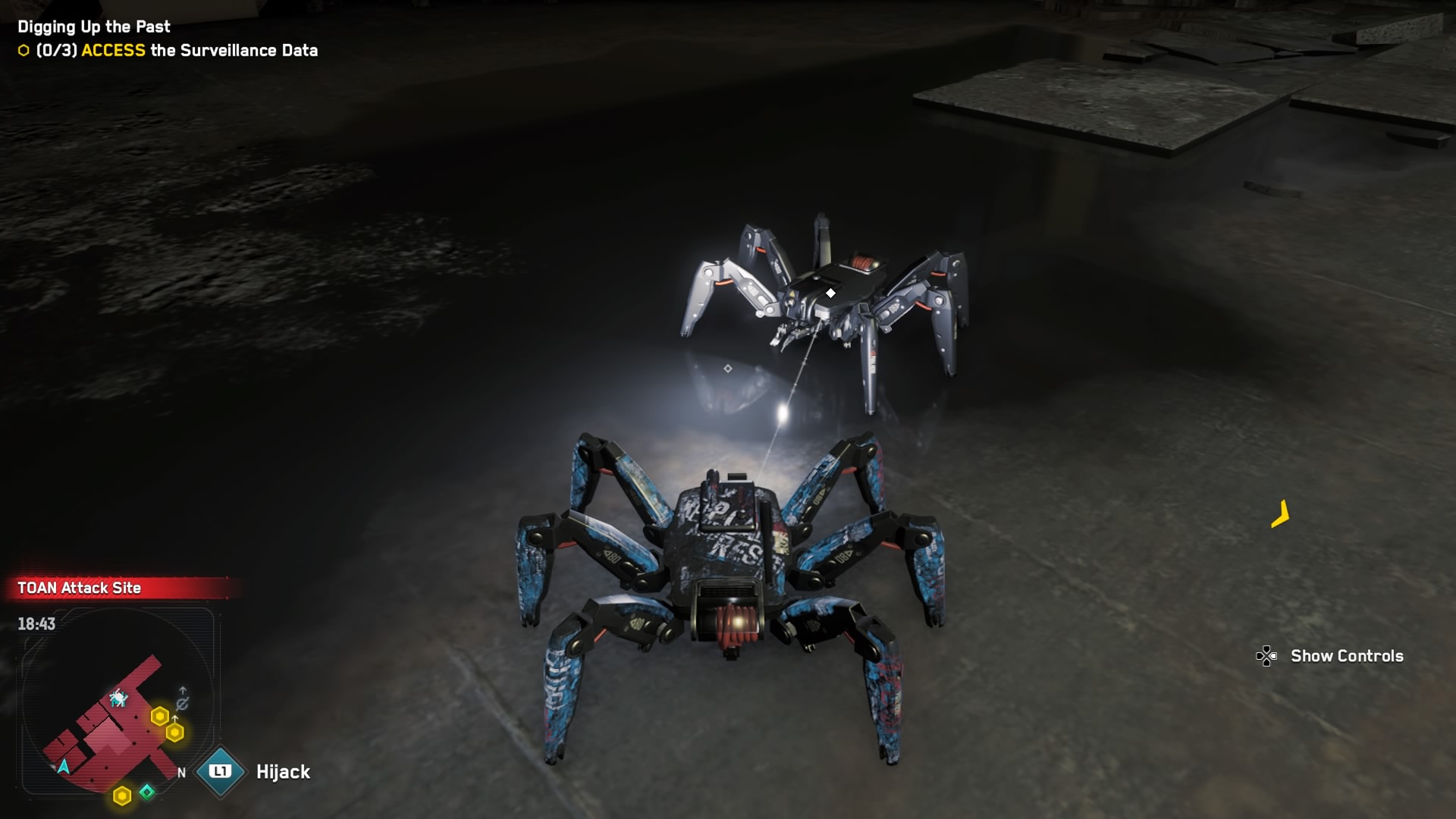 Players can control and use a spiderbot to infiltrate restricted areas and can use the bot to hack terminals as well. There are plenty of ways to approach missions and it is entirely possible to complete missions using your spiderbot to safely neutralize every adversary available before you casually stroll on in and hack terminals that require your physical input.

Progression in Watch Dogs: Legion is tied to “Tech Points” which allow you to spend points to unlock new perks for your recruits. Earning and spending these points is paramount to success later on in the game since they will unlock new weapons or abilities which can make you unstoppable in actual combat. 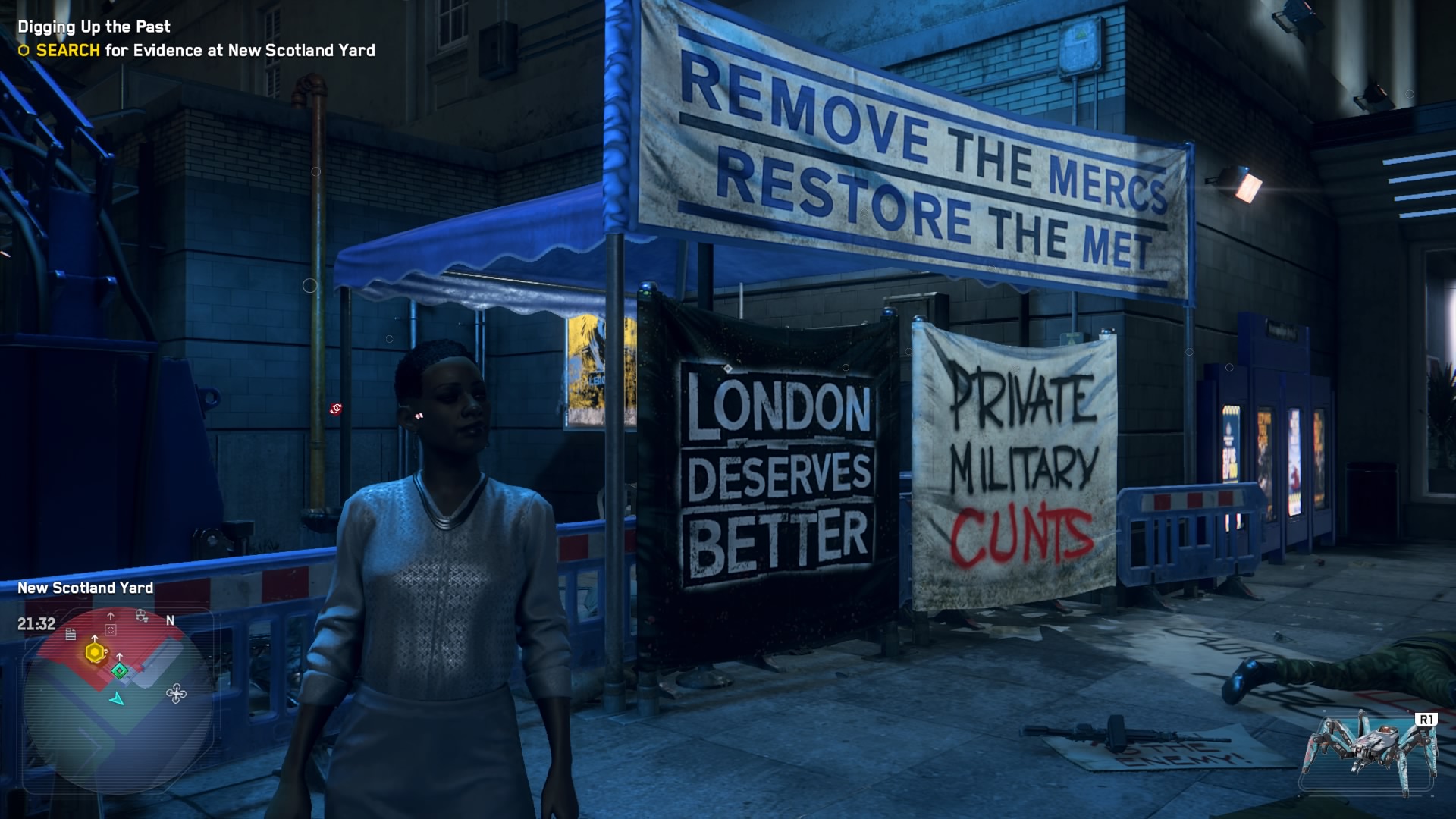 Listening to the radio is one of the most important things in the game for a variety of reasons. There are plenty of podcasts to be found in the game world and listened to via the radio which build up the game’s story incredibly well. The podcasts deal with multiple aspects of the game world such as the use of cryptocurrency, Albion’s rise to power and disturbing realities which could upset people in real life as well because of how eerily similar it is to situations that are happening right now. Watch Dogs: Legion has a deep, dark underbelly of content in these podcasts and in-game messages that will cause people to start questioning whether or not it may be too close to what could happen in reality itself. Ubisoft really went straight into the deep end of Post-Brexit London here. For an unknown reason though, if you play a podcast from the menu, you have to actually be in the menu to listen to it and can’t just let it play while you walk around in-game. This is a slight misstep since not many people may want to do this. 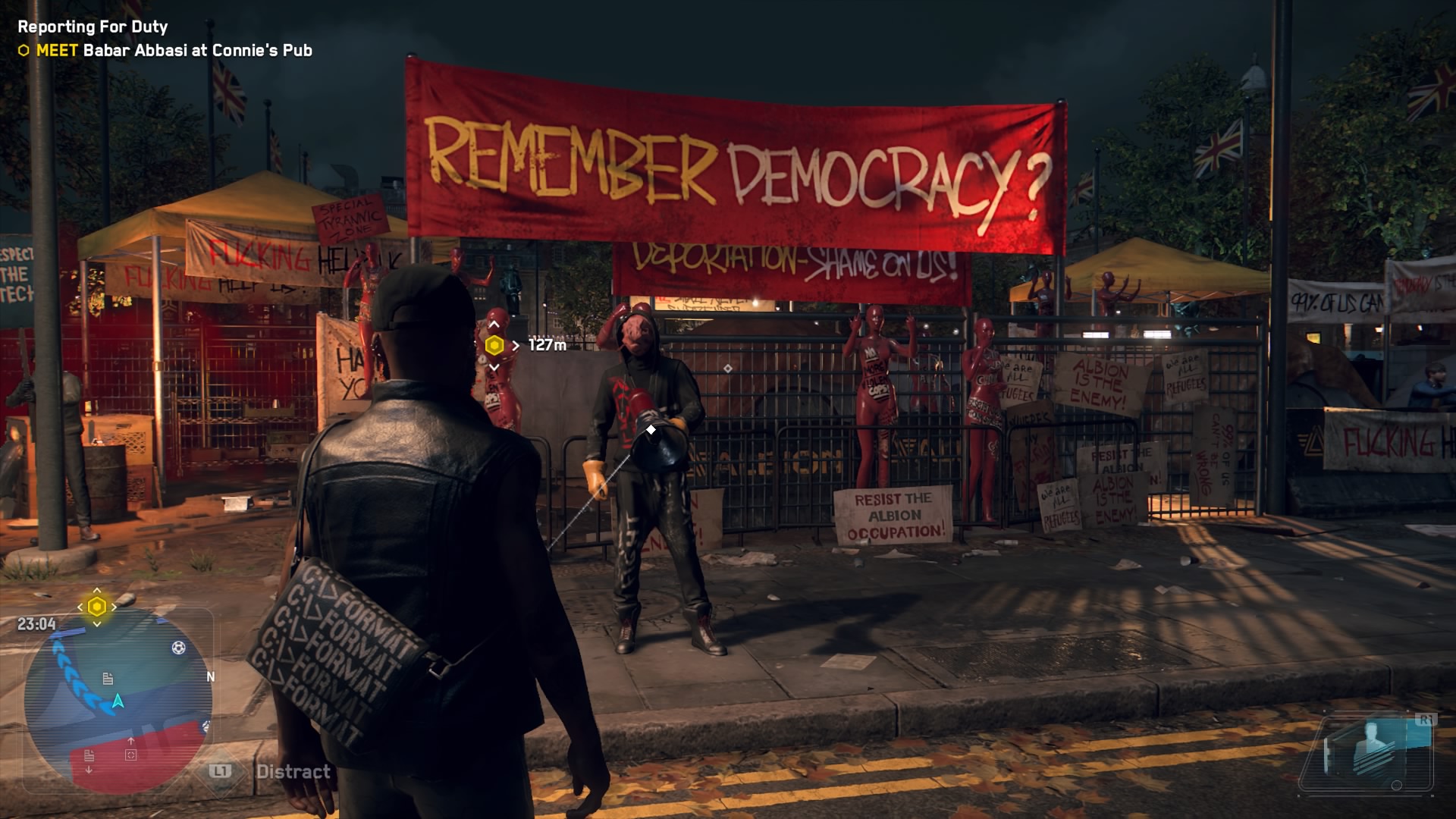 Graphically, Watch Dogs: Legion looks great at times while looking remarkably unpolished and bland at others. On PS4, some areas of the game look spectacular while others look weirdly flat and visually, just not pleasing. We’re hoping the PC and next generation versions of the game look better. London itself also looks amazing. If you’ve never been to London, the game is a great way to be a tourist and explore notable locations such as the Tower Bridge, Buckingham Palace and Piccadilly Circus.

Explosions and other effects though are great throughout and weapons sound authentic too. The soundtrack on offer in the game features quite a range of licensed music on the radio and the voice acting in-game is authentically British sounding.

Overall, Watch Dogs: Legion is more of the same Watch Dogs formula fans of the franchise have come to expect. There are additional gimmicks and features that round off the product and it’s a great game to spend time in. The mystery plot and the intrigue around finding out just who exactly Zero Day is and putting a stop to him is great and will easily keep you entertained for 50 hours or more as you explore London. If you are a fan of Watch Dogs or if you are into games that feature lots of open-world exploration and collectibles, Watch Dogs: Legion comes highly recommended from us.
8

Graphics are a mixed bag

KnightFall500
Loved the last one, but many other games on the top of my list.
This one will have to wait.

Tebulot
The last games where a bit of a fail for me. Number one was super emo, and two just leaned to heavily on the idea that all hackers are tatooed and pierced rebels with Lockdown haircuts. Got old quickly. Might have a look once there is a GOTY edition 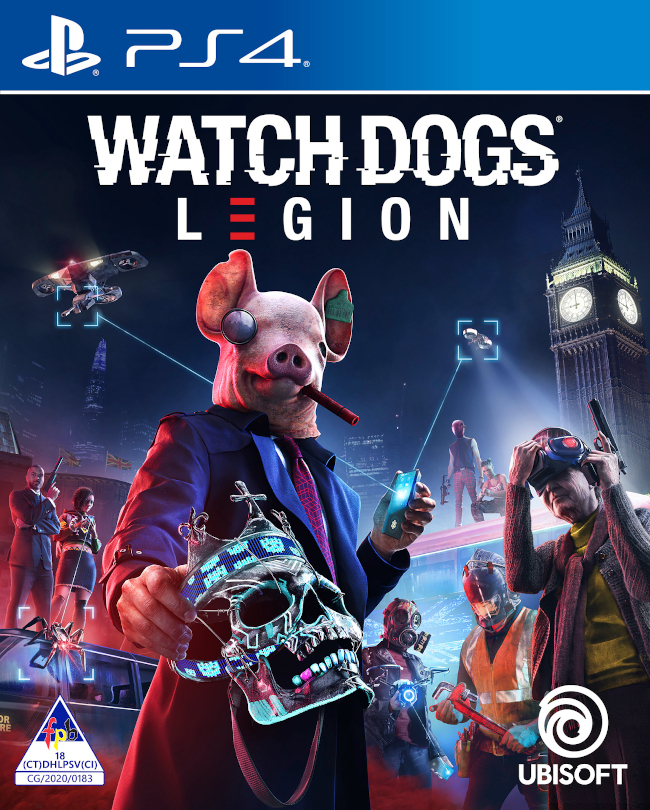