Rage Against The Nanites. 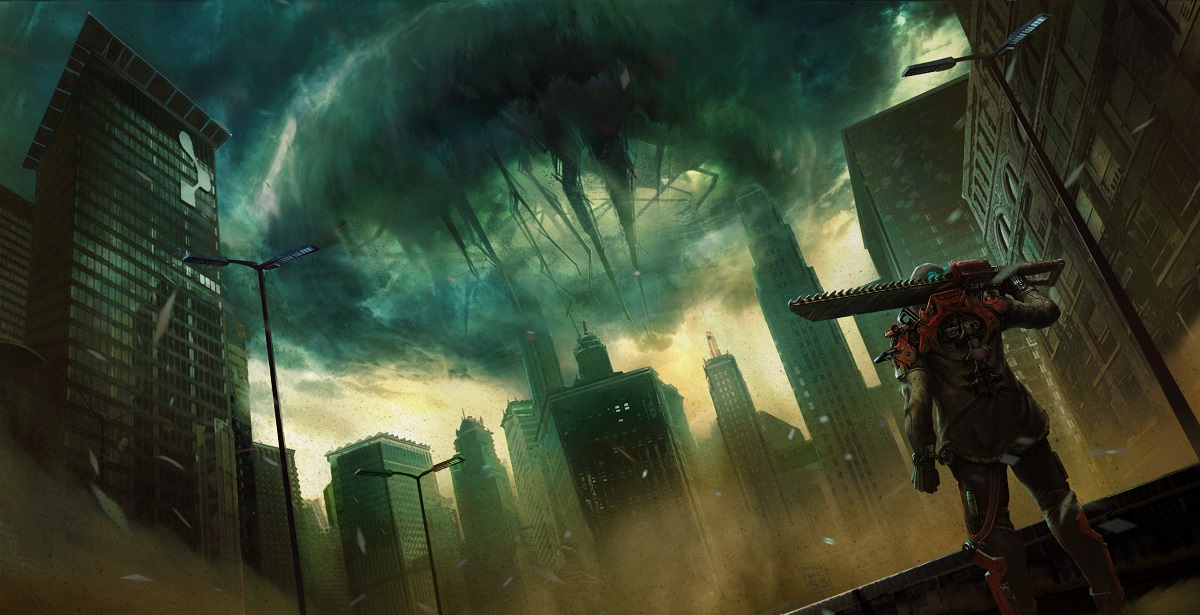 After the mixed reception to 2014’s Lords of the Fallen, Deck 13 parted with CI Games to develop 2017’s The Surge by their lonesome. A faster-paced ‘Souls-like that stood out thanks to its sci-fi setting, limb-targeting exo-rig combat, and intuitive, flexible progression system. What it lacked was polish and a key component that many fans were after – a multitude of mechanically interesting and challenging bosses to slay. The Surge 2 has expanded on that solid foundation, offering up a larger and more diverse environment, new and challenging enemy types, more gear, a refined progression and crafting systems, and more than double the number of bosses. However, the Fledge engine that powers The Surge 2 is starting to show its age, especially on the base consoles.

Although it’s not vital to have played the first game, The Surge 2 benefits from the player understanding a bit of the back story, and several key characters – some of whom were just voices on an audiolog - reappear in Jericho City. Events in The Surge 2 pick up right after the climax of the first game where, irrespective of your final choice, a semi-sentient nano-virus payload was detonated in the atmosphere, sending a shard crashing into the aircraft your new protagonist was travelling on. Two months later, you awake in a detention centre falling apart around you (which serves as the tutorial), before escaping onto the Jericho City streets - on the hunt for Athena, the daughter of CREO’s former CEO Jonah Guttenberg, who seems to have some connection to the player. You swiftly discover the city has been quarantined by the military to avoid the spread of the “Defrag” disease, and there’s a giant nano-virus anomaly looming above. 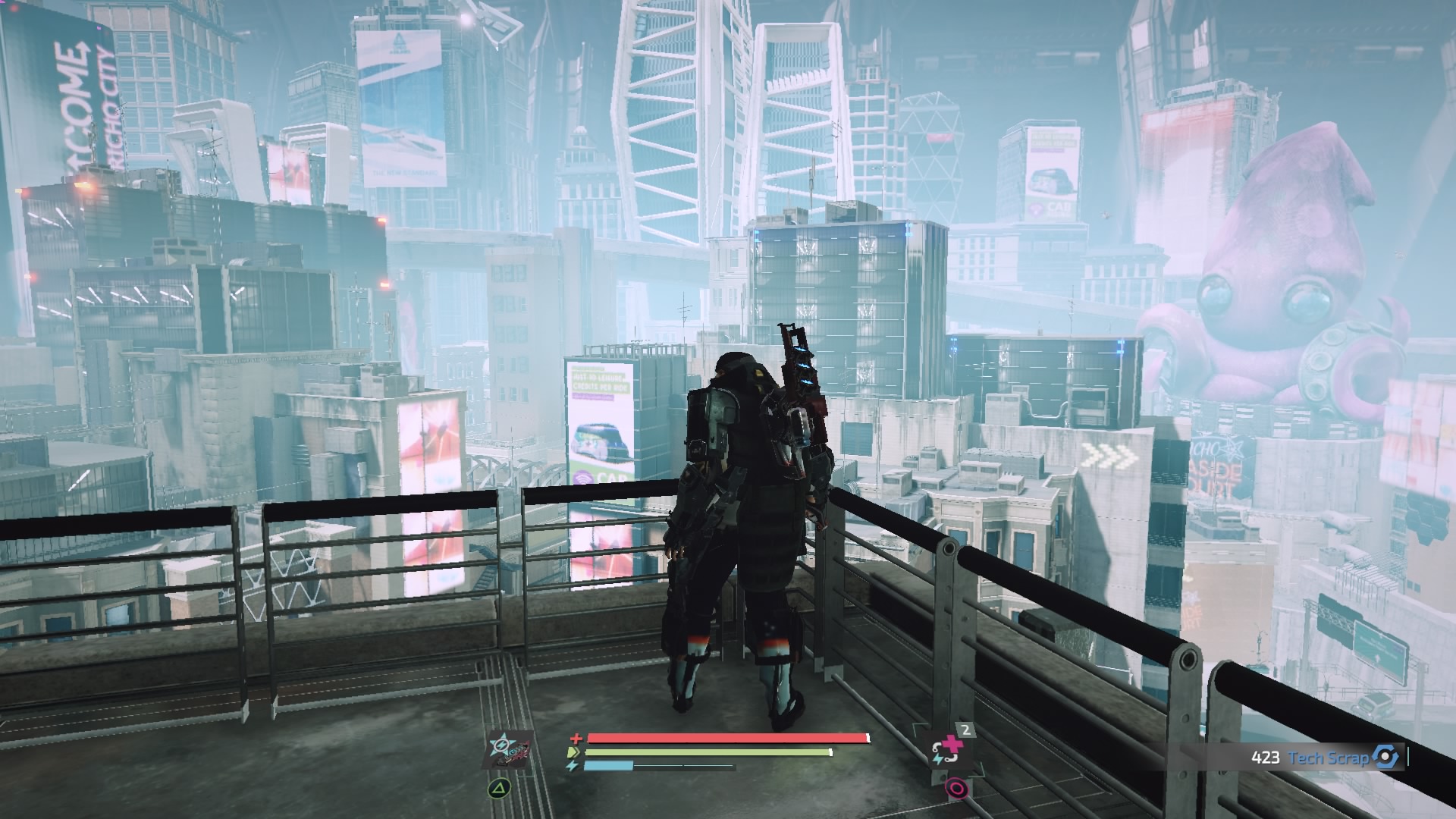 Despite its apparent size, Jericho City is more dense than sprawling. You’ll be fighting through it block-by-block, opening shortcuts as you go.

Unlike the first game, which put you in the shoes of paraplegic turned exo-rig warrior Warren, The Surge 2 lets you create your own protagonist, male or female, with plenty of customisation options. You even pick one of several character backgrounds, though they only seem to offer minor dialogue variations and a unique set of armour from vendors. The city manages to feel both familiar and vastly different from the sprawling CREO complex; the Jericho City downtown serves a sprawling core area, with three large zones branching off, typically connected by a hub area full of survivors that offer up expository dialogue or secondary quests that reward new gear schematics, crafting components, or simple tech scrap.

Common enemy mobs and boss characters are no longer primarily psychotic augmented workers, malfunctioning robots, or angry production lines, rather gang factions and shady paramilitary groups that have carved up the quarantined city.

Common enemy mobs and boss characters are no longer primarily psychotic augmented workers, malfunctioning robots, or angry production lines, rather gang factions and shady paramilitary groups that have carved up the quarantined city. Sure, you’re dealing with tired clichés – mafia styled drug lords, crazy cult leaders, gung-ho military types, and rampaging nano-virus beasts – but it adds some much needed personality to a game, especially in light of the fact your own protagonist no longer has a voice (you just select your response from a text menu – classic RPG style). Conveniently, several characters from the first game, including Warren, are also in Jericho City, offering up links to the first game and the option to contribute to their story arcs. Given the focus on combat and progression systems, the story can still feel like an afterthought at times, but it’s far more developed and engaging than the first game. 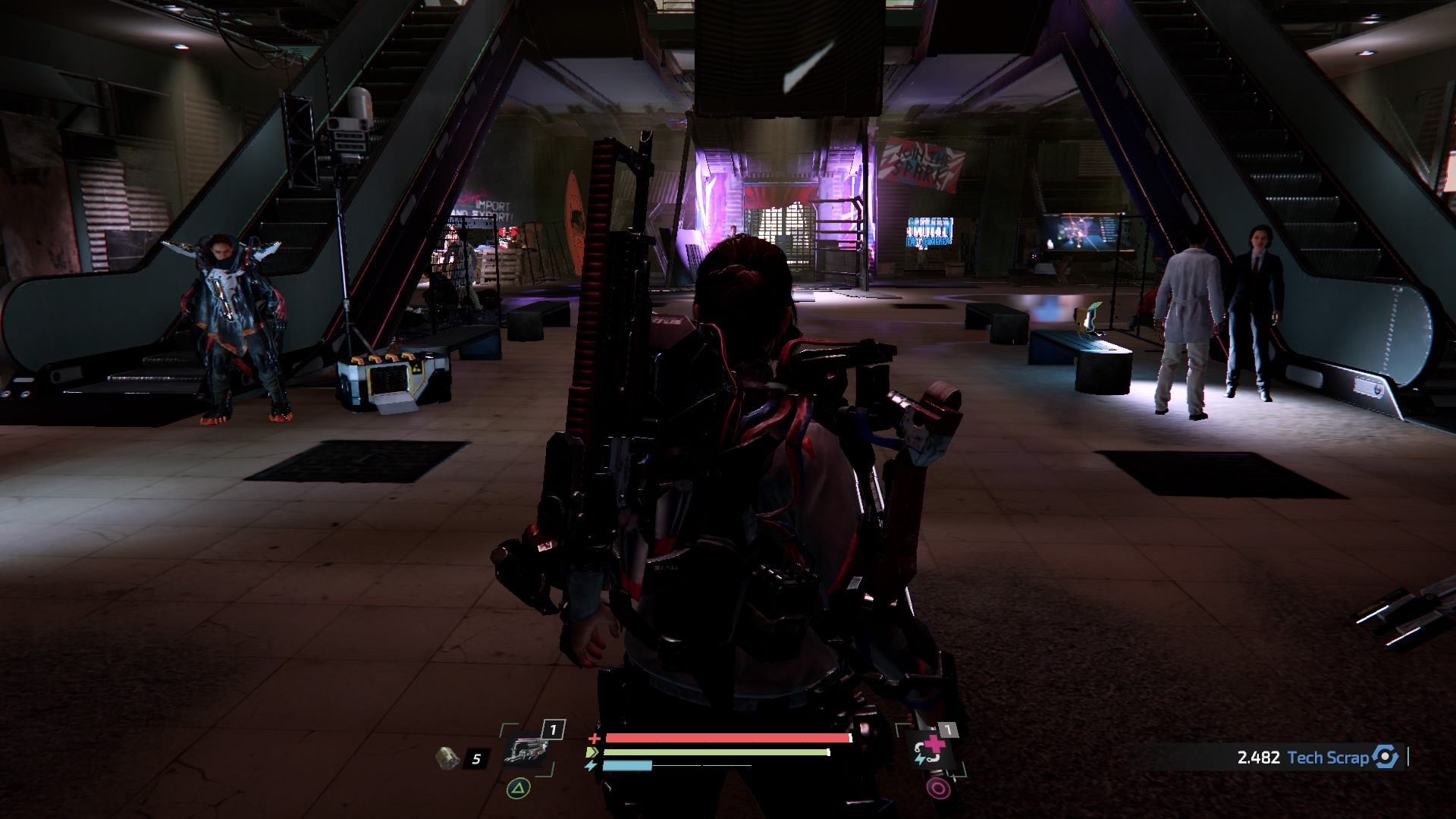 Hub areas give you some insight into what the survivors have been up to since the city went to hell. You can listen to random NPCs, pick up secondary quests, and even meet a few characters from the first game.

Mechanically, The Surge 2 is more of the same with several refinements, and some much-needed polish. Combat still requires careful movement and timing, while you monitor your health, stamina, and battery levels. Killing enemies earns you tech scrap, which you can invest in new core levels or craft gear at med-bays (which, of course, respawns enemies in the world). Falling in battle drops your scrap that’ll slowly decay until you get back (or die again, losing it forever). Coupled with basic enemies that have some powerful attack moves, you’ve got timeless ‘Souls-like mechanics that ensure every battle is a tense affair and opening shortcuts back to the local med-bay is vital to avoid frustration (each area usually has only one central med-bay).

Targeting limbs is still vital for inflicting extra damage or farming crafting resources, while the Bosses remain a highlight, as almost all of them require careful pattern recognition and patience to overcome. Thankfully, The Surge 2 always offers quick shortcuts back to each boss fight - if you’re observant.

Mechanically, The Surge 2 is more of the same with several refinements, and some much-needed polish.

Depending on the stats you’ve prioritised, and gear you’ve equipped, you can play as a slow, tanky, slugger; a lightly-armoured but nimble back-stabber; or anything in between. Movement and melee combos remain largely unchanged, with your attack speed dependent on your weapon (which follow the typical swift double-blade, medium speed sword/staffs, and slow hammer formula), but The Surge 2 really shines when you combine the combat move-set with a highly flexible progression system that requires balancing your core level with upgradeable implants and gear requirements. As you gain core levels, you can equip better armour pieces and implants that you’ll find, purchase, craft, and upgrade during your run. Typically, the heavier the armour, the higher to core power cost per piece, and the less you can rely on implants. On the other hand, lighter armour may leave you knocked off your feet when struck by bigger foes, but the passive and active perks offered by a myriad of implants can keep you in the fight longer, or dramatically boost your damage output. 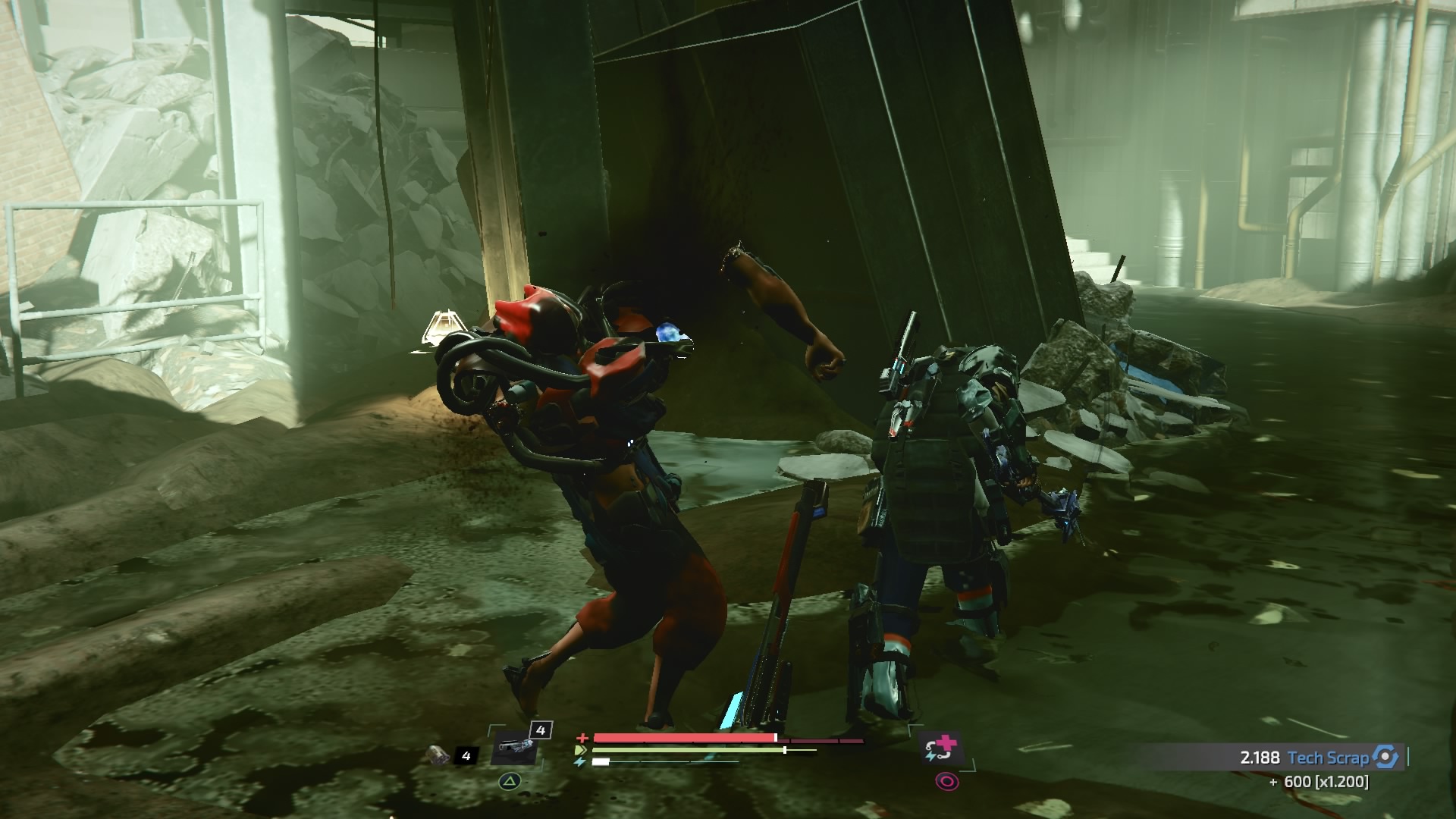 It never gets old! You can toggle a setting in the menu to speed through them, or watch every dismemberment in glorious slow-motion if you want.

Carried over (mostly) unchanged from the first game, crafting and upgrading your gear, weapons, and implants remains intuitive and simple. You build up battery with each strike or block to trigger dismemberments at low enemy health, allowing you to remove specific body parts for new crafting schematics, or the resources your need to upgrade those components. You want a new set of faction armour? Go around systematically removing legs, arms, torsos, and head for the crafting schematics. Already have the gear and want to upgrade it? Target the same body parts to get the required resources.

Different crafting materials are universal between armour sets, so you don’t have to grind one enemy type; higher-tier material can be broken down to swiftly upgrade a new set from low-levels; enemy armour with implants is visually indicated and can be targeted to produce resources to upgrade your own implants. There are even shops in hub areas that allow you to sell of old armour pieces for tech scrap – but not weapons, resulting in an inventory cluttered with gear you don’t use.

The best aspect of the progression system is that everything can be adjusted on the fly, allowing you to completely rebuild your character as the situation demands.

The drone returns from the first game, but in The Surge 2 it is far more effective in combat. You can modify its gun attachment (though the deadliest mods require ammunition rather than rely on a cooldown); use it to drop mines and turrets; or equip a shock mod that can stun enemies and open certain doors. The best aspect of the progression system is that everything can be adjusted on the fly, allowing you to completely rebuild your character as the situation demands. Swap heavy for light armour to increase mobility, stack several damage-enhancing or healing implants if you want to be reckless and trade blows, or equip implants that boost energy gain (for dismemberments) and up the tech scrap drop rate when you’re farming. This system deserves an entire article of its own and is something the Dark Souls games could learn from. 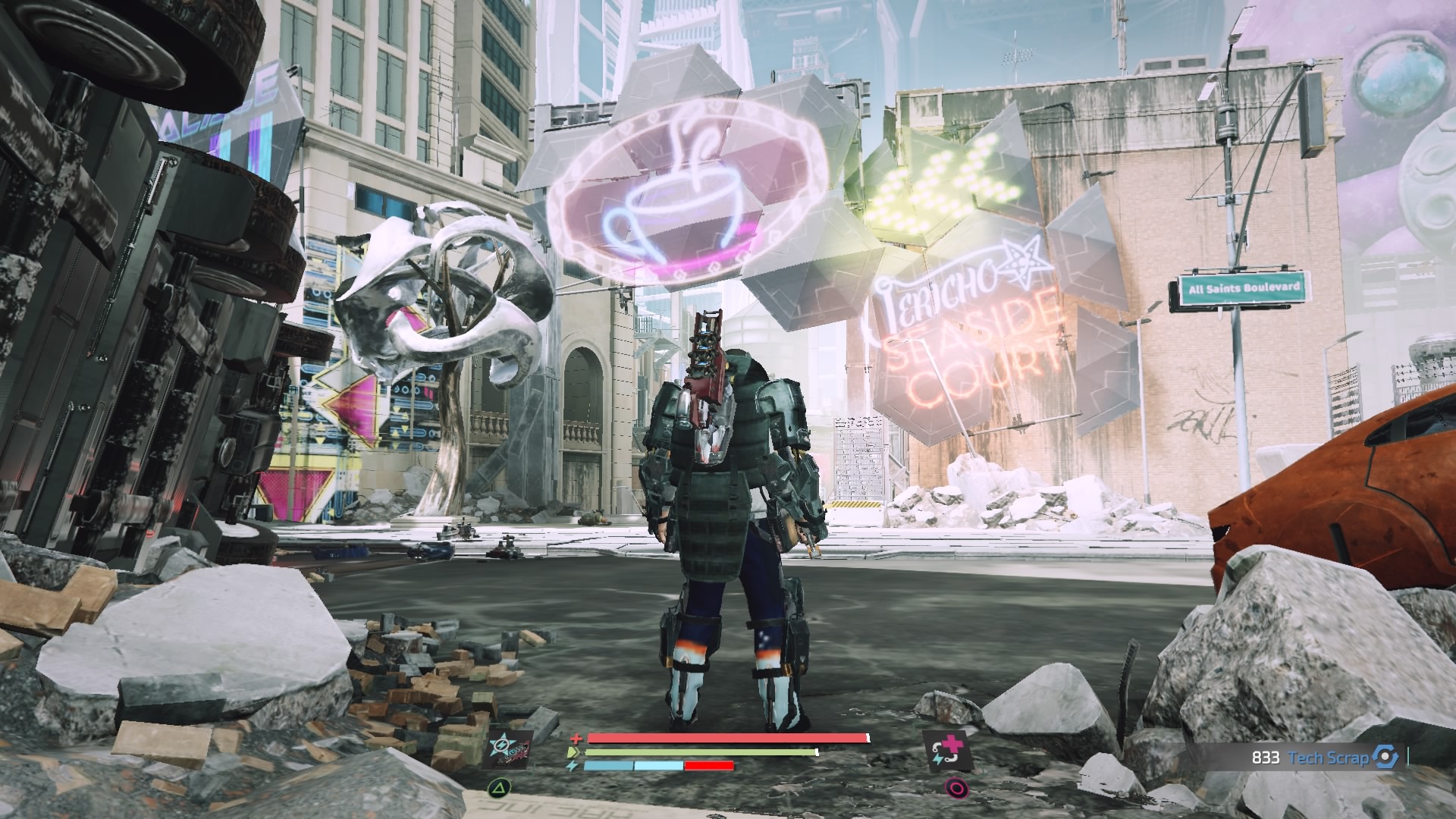 There are, perhaps, still too many brown-grey industrial locations, but Jericho City offers up some much needed colour in several spots.

I touched on the world structure briefly above, but The Surge 2 continues to excel at creating dense, interconnected environments, rather than simply big ones. Often, you’ll immediately see your objective when entering a new area - sometimes less than 100m away - however, by the time you get there, you’ll have traversed several streets, the sewers beneath them, and maybe a few rooftops, unlocking shortcuts along the way (naturally, more verticality = more ledges to fall off). Despite the apparent size of Jericho City, most of the action takes place across several intricate blocks, with new routes opening up as you unlock new exo-rig attachments. The Fledge engine continues to impress - and must be insanely optimised as the install size for The Surge 2 is only 10 GB - however, despite stable performance on every platform, the world can look rough in places on the base consoles, with texture pop-in, blocky shadows, and aliased edges abundant. Thankfully, the use of vibrant colours, excellent animations, the meaty sound of combat, subdued but atmospheric music, and solid voice-acting will keep you immersed.

With all that said, The Surge 2 doesn’t feel like a massive technological step forward from the original, but on the narrative and gameplay front, it exceeds or refines the experience. Jericho City is a joy to explore, the narrative is more complex, bosses more numerous, and the excellent combat and progression system still engaging. Once again, New Game Plus offers up slight changes to some sequences and enemy encounters to keep things fresh, as well as new tiers of gear and implant upgrades for the committed. If you enjoyed The Surge, The Surge 2 can be considered a must-buy - just be aware that it's lagging behind on the presentation front. 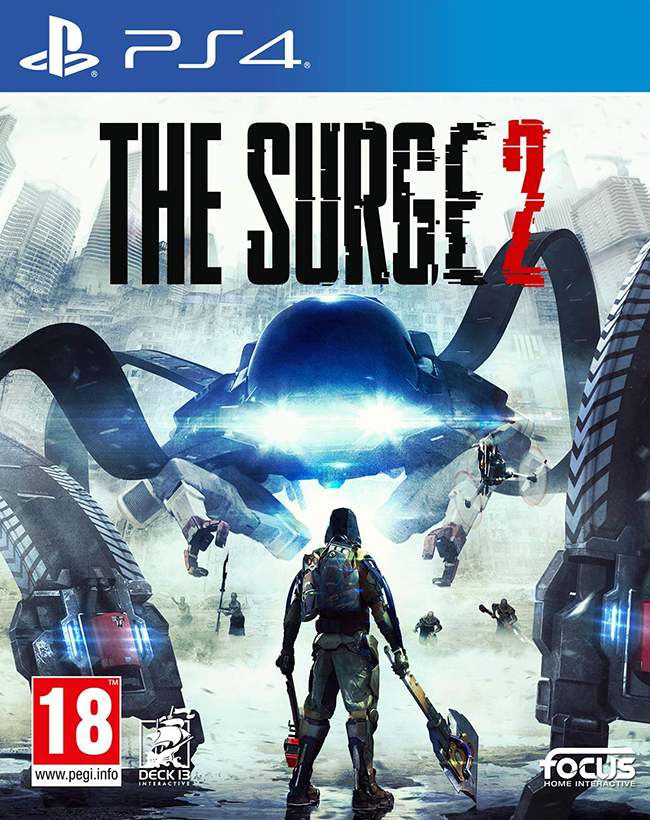