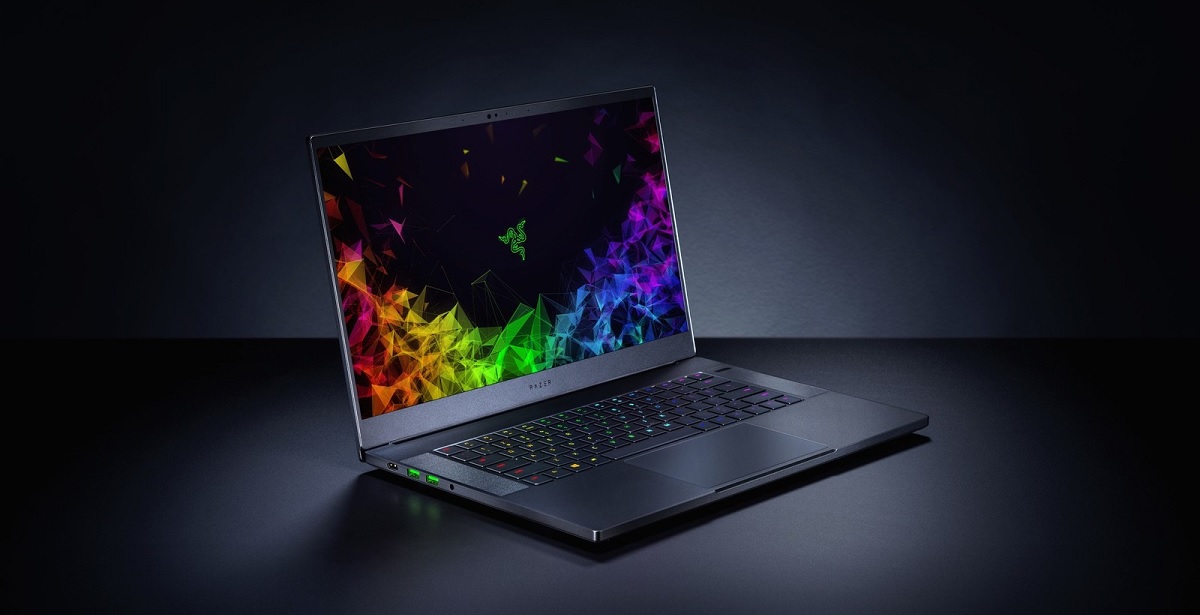 Razer has withheld their highest end products from South Africa's shores for many years. We were able to get keyboards, mice and headsets, but their laptops were always just out of reach unless you had friends or family willing to bring one back in their luggage. Well that ends now as Razer has finally deemed us worthy of giving them oodles of cash for the privilege of carrying their premium grade laptops around. 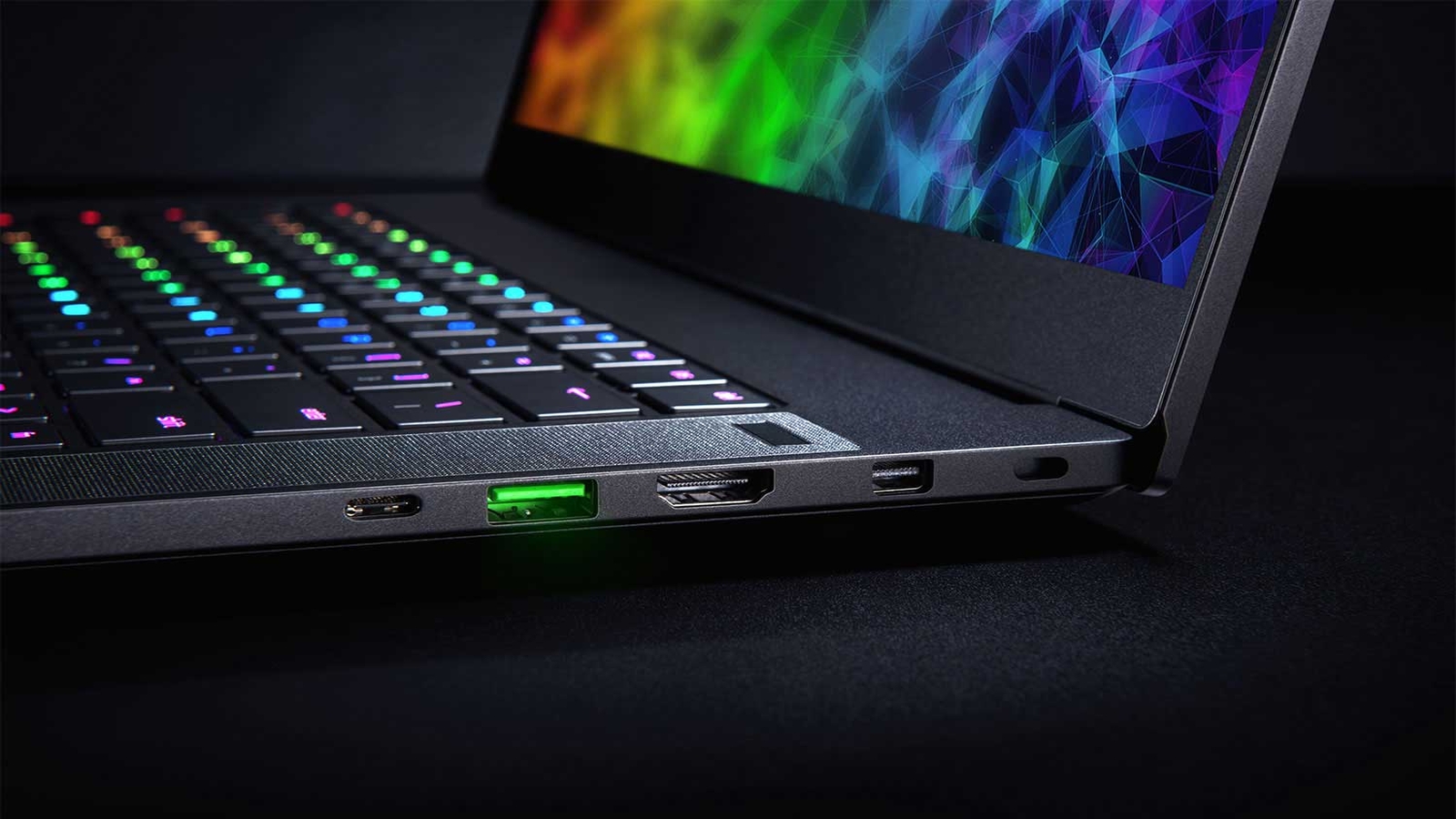 It’s long been joked that Razer is the PC version of Apple. Premium engineering and design with a price to match. And that really hasn’t changed. Razer was really the first laptop manufacturer to look at what Apple was doing with their Macbooks and ask the simple question of, “Why don’t we do the same?” They did exactly that and brought a sleek modern aesthetic to the Ultrabook market but for Windows.

The Stealth 15 is a black, sleek piece of aluminium that hints at its pedigree via the Razer 3 snake logo on the lid. It isn’t loud or in your face so it's a machine from an aesthetic point of view that can be used in a professional setting. Lifting the lid - one-handed lift naturally - reveals a beautiful, almost bezel-less screen and a chiclet style keyboard. The screen along the side and top is nearly edge to edge, giving you 15.6” of real estate and while the “chin” is somewhat large, I have yet to experience any laptop with an edge to edge screen that includes the bottom edge. Testing screen and deck flex, you will be pleased to know that there is not anything egregious enough to feel cheap. There is some flex, which is to be expected, but nothing that will irritate or have you asking why you paid the price you did.

I like this keyboard layout; it isn’t trying to cram a Number Pad in resulting in odd placement of different function keys. While not having a full keyboard is a compromise that anyone used to having such a layout will not enjoy at first, it makes sense and is not a huge problem with the proliferation of portable keypads out there.

What I am very pleased to report is that Razer has continued with the large trackpad (multi-touch of course) that is comfortable to use and has good palm rejection so that you don’t accidentally move the mouse pointer while typing. And related to that lack of deck flex, I was not able to click the pad by pressing on areas of the palm rest of keyboard.

Specs to Please the Gamer

The review unit that I was provided with isn’t the Advanced model that you can find advertised on the Razer website, but that doesn’t mean that it is an underpowered machine. The specs on this machine will, in fact, happily reach high framerates and graphical settings for years to come.

The display, coupled with that CPU and GPU, makes for a powerful gaming machine. The only criticism I have is that the included storage is a bit light these days. Call of Duty: Modern Warfare will dominate the included SSD, however the laptop is upgradeable with an unpopulated m.2 slot. I did not open the unit to see how easy it is to upgrade, but If you are a little bit tech savvy it shouldn’t be a big problem.

Disappointingly, and probably to save cost, the base model does not include full Razer Chroma functionality as the laptop does not sport per key back lighting. Instead the single zone backlighting means that you cannot customise the keyboard to light up the WASD keys and other hot keys in unique colours. I’ll repeat my stance on RGB, it is a mostly useless vanity project except when it comes to keyboards where it can be used to make keys easier to identify and reference in relation to program shortcuts.

My first battery of tests is always the synthetic benchmarks, Heaven to test for heat soaking and what the performance is after prolonged use. I also run 3D Mark Timespy Extreme, well because it is the benchmark and standard for testing PC performance. Finally, I also run Cinebench R20 to test the CPU performance under load. 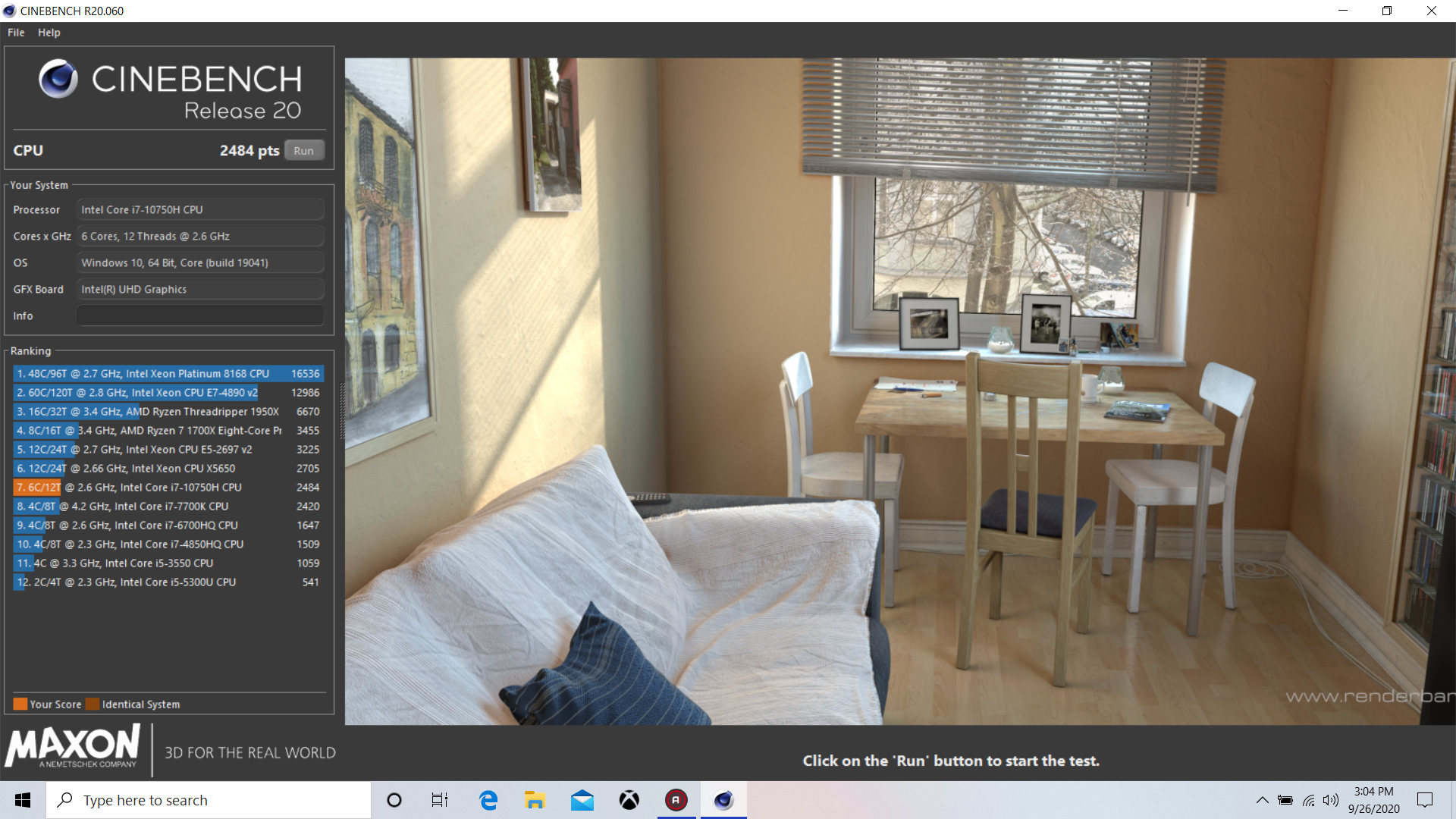 Running the Heaven benchmark for 30 to 35 minutes stabalised the FPS at around 80 FPS, something I would expect from an RTX2060 running a DirectX 12 benchmark. Even cranked up to Ultimate settings thelaptop had no problem keeping up. However, under this load HWInfo reported that the CPU was breaching the thermal limit of 100 degrees centigrade as the average hit around 101 degrees. Now normally you would notice dropped frames as the CPU starts to thermal throttle, but I did not see that happening. The GPU however stayed at a comfortable 79 degrees centigrade. 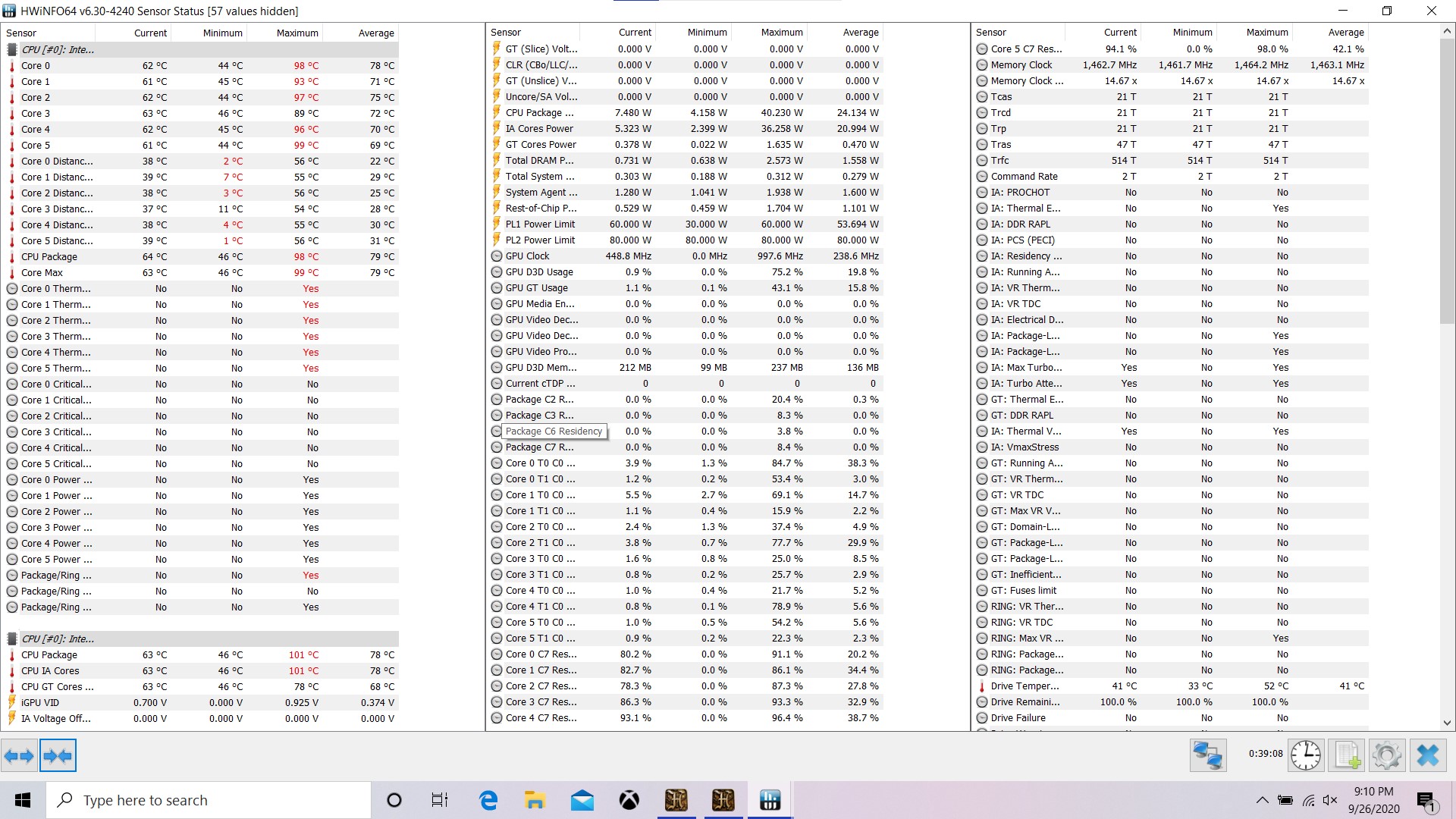 The actual consequence of this though was that the palm rest area under the keyboard became hot to the touch... uncomfortably hot. There wasn’t a danger of getting burnt, however trying to rest my palms on the laptop to simulate playing a shooter wasn’t comfortable. Having said that though once I shut down Heaven, the cooling system kicked in and dissipated the heat quickly in less than two minutes. This may also be a case of having to tweak the fan curves from stock which would increase fan noise but would make using the laptop without a separate keyboard possible.

Timespy was the complete opposite in terms of thermals with the CPU averaging 81 degrees and giving me a respectable score of 5 718 with an average FPS of between 34 and 36 FPS. Cinebench R20 showed the laptop hitting right where I would expect, the middle of the pack for a 6 core 12 thread CPU. 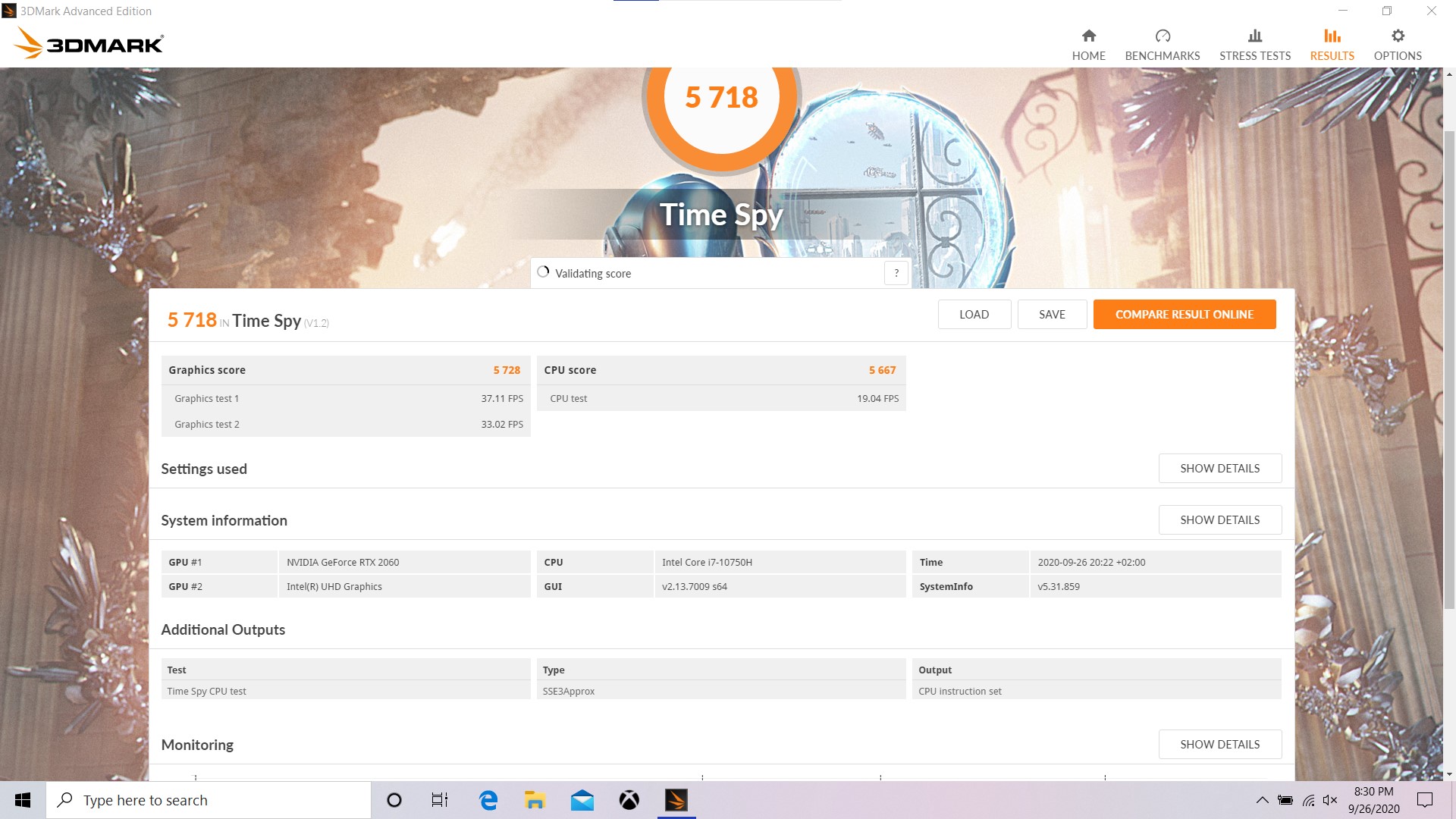 So far so good, but this is really a gaming laptop in disguise and luckily a few games now include a built-in benchmarking tool. First up was Rise of the Tomb Raider, an older title sure, but a good example of the power of laptop. The laptop performed brilliantly with an average of 87FPS. The Division 2 at high settings performed brilliantly averaging 77FPS. 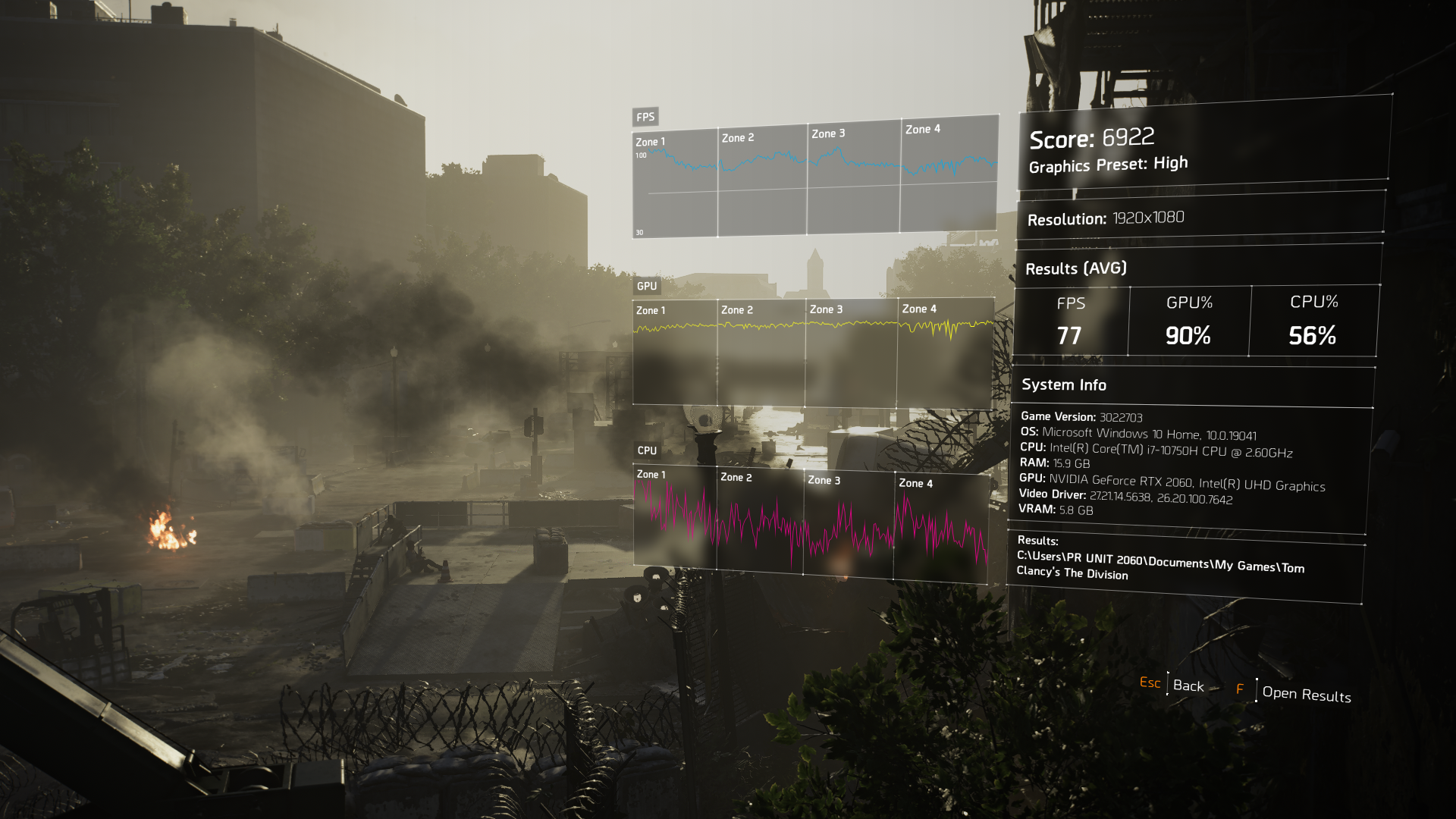 Benchmarks are fine, but what is it like to actually game on? I am happy to say that it lives up to the Razer motto of “For Gamers, By Gamers”.

Playing a good chunk of The Division 2 resulted in an average of 73FPS and while the framerate fluctuated from a max of around 89 it only dipped below 60 once. This is a fairly steady framerate meaning that even if it does drop you aren’t really going to notice.

To test the CPU load, I like to run a custom battle in Total War: Warhammer 2. Having hundreds of units rendered on screen will tax the CPU. While the average framerate is a relatively low 35FPS with consistent lows in the low 20s, this is a game that doesn’t require a high framerate. Playing with graphical settings would even out that FPS graph, but for me that doesn’t really matter as the experience in that 30-minute custom battle did not impact on my enjoyment of the game. 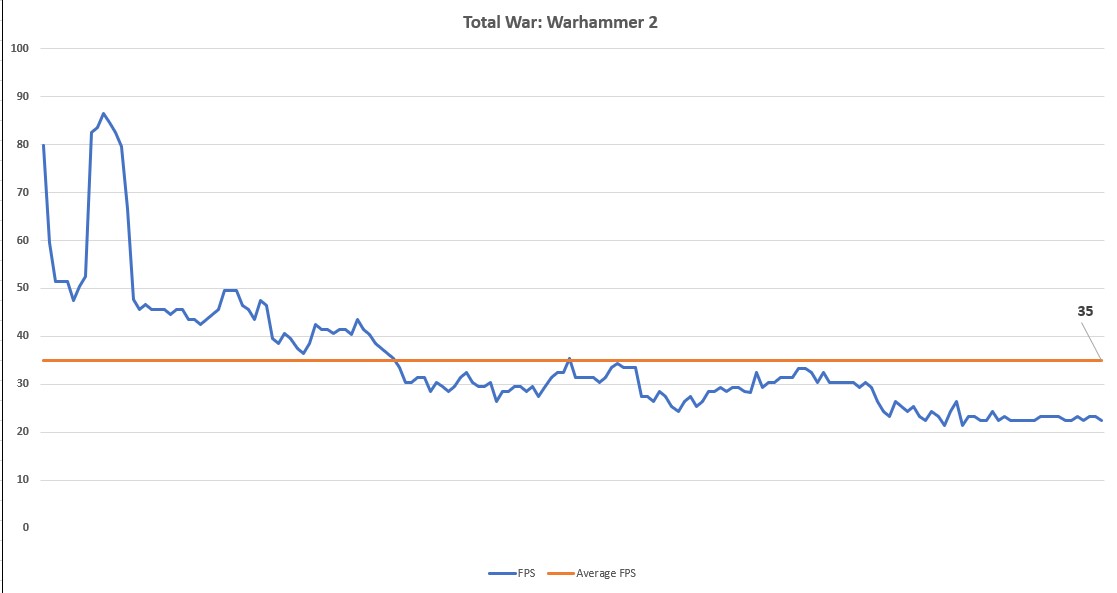 I also tested DOOM (2016) because that is a twitch shooter and the internal framerate counter showed average framerates of around 85 FPS and all on High to Ultra Settings.

Given the performance in demanding games, when playing on the go you are likely to play e-sports titles like Rocket League and CS:GO and those games hit insanely high framerates. And with that performance the other piece of the laptop gets to shine. With a 144Hz refresh rate the laptop will make it just that little bit easier for you to get on target quicker than your opponents and may just shave off that millisecond or two you need to get off that headshot or make that save that your opponent doesn’t have.

Razer Blade – Cuts Through Anything

The Razer Blade 15 is an expensive laptop, but the specs and clean design makes it an attractive package. But looks aren’t anything without performance and the performance in gaming is impressive. While the RTX 2060 is now the low end of the ray tracing family, it is still a powerful GPU that will allow you to game at High to Ultra settings for years to come.

If you have the budget and want a machine that will serve you for both work and play the Razer Blade 15 is a machine I can recommend you consider.
8.5

A good keyboard and large trackpad

Can run a bit hot