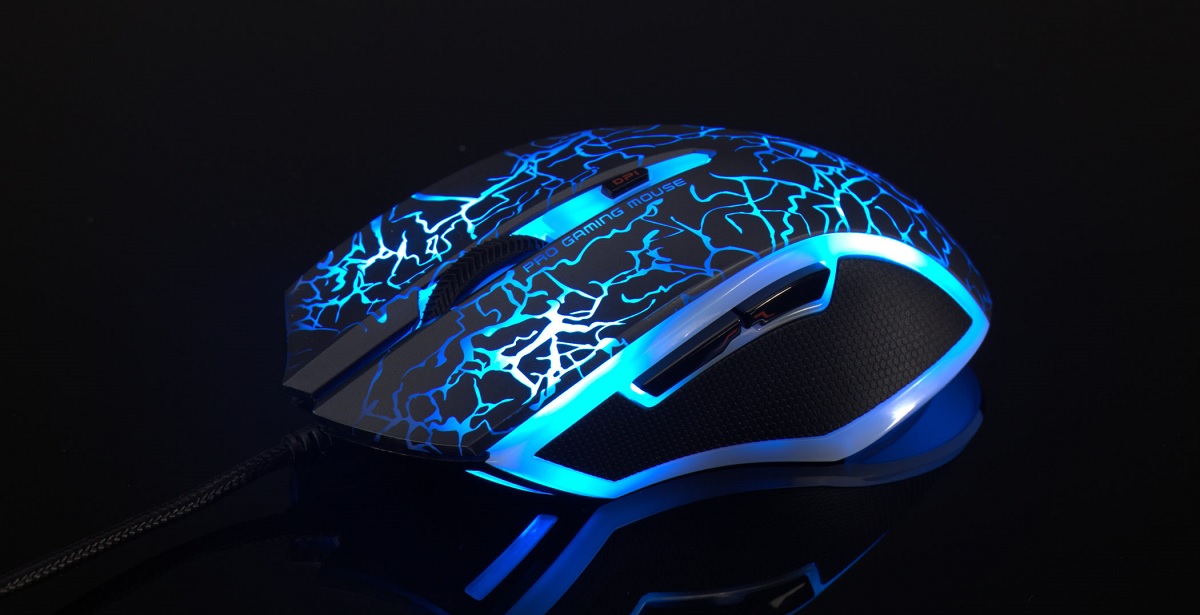 While most gamers will scoff at some of the budget products out there, believe it or not, there are plenty of users who will make use of these products. These products don’t break the bank but still deliver solid performance and that is exactly where both the Rapoo V16 and V20S fit in. These are budget friendly, consumer friendly peripherals which surprisingly hold up just as well as their pricier, premium brand name counterparts. 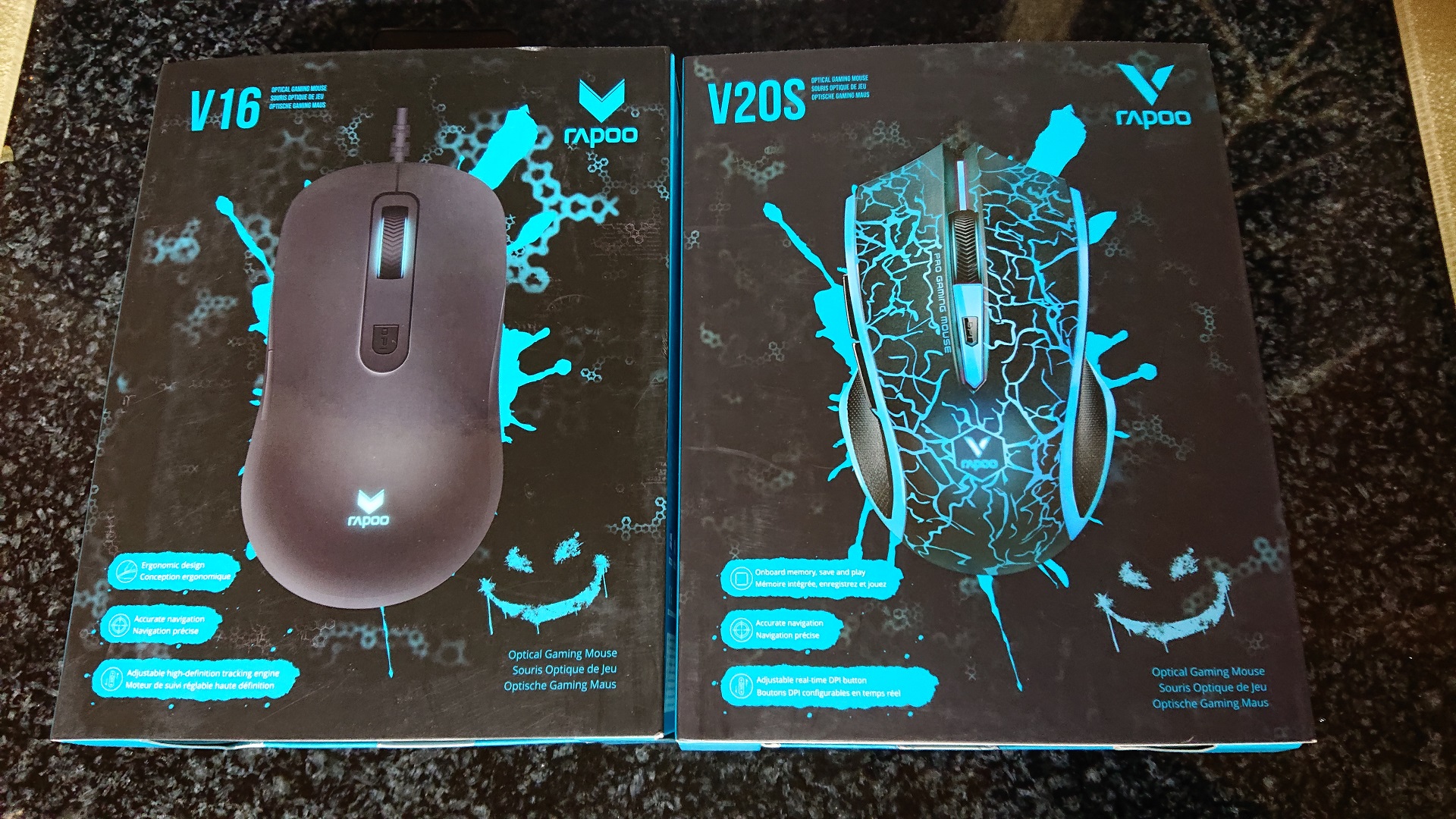 Before we get into which of the following two mice is the better buy, first up, the technical specs of each one. 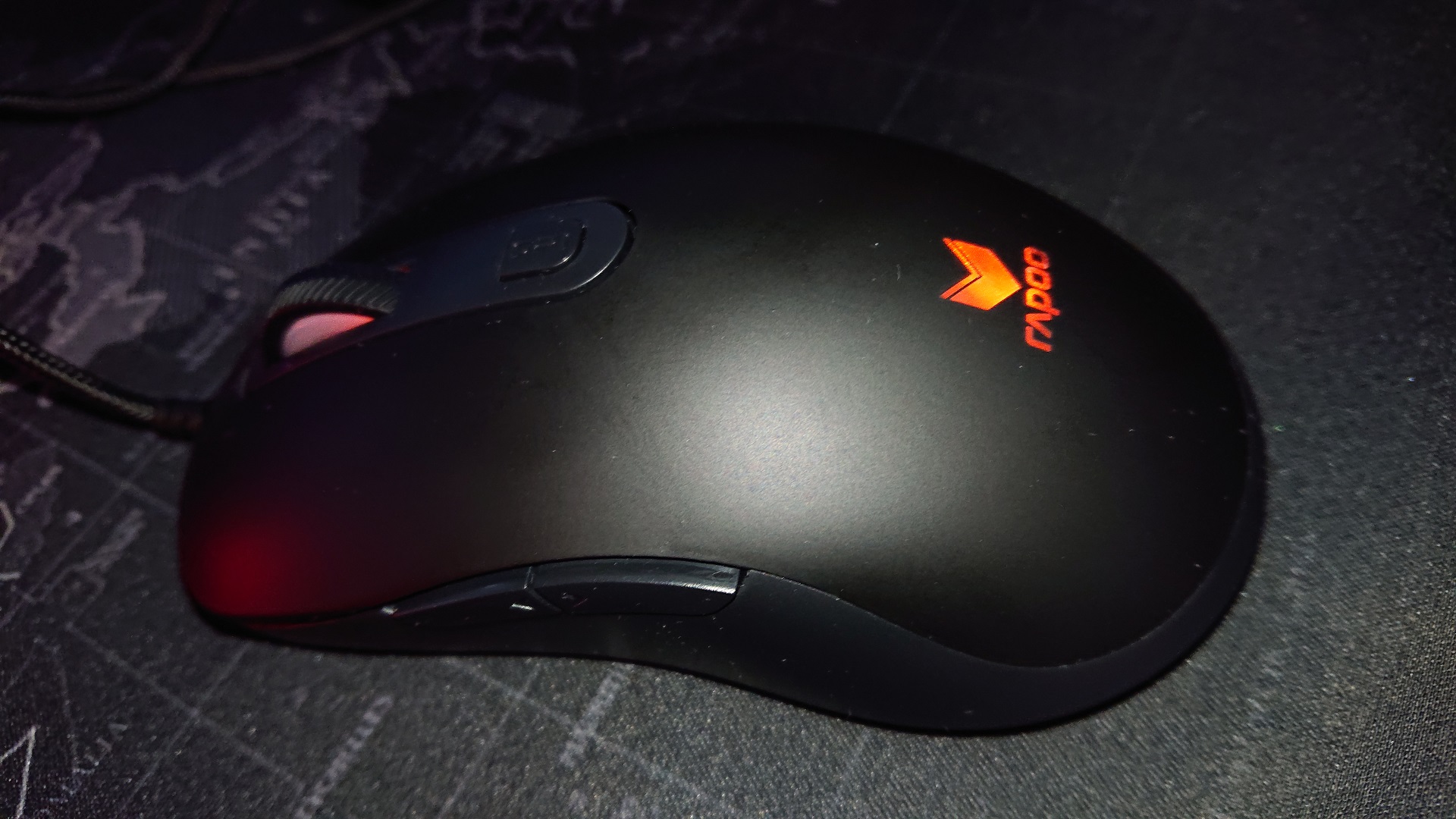 Looking at the Rapoo V16 first, this is a fairly straightforward, extremely basic looking USB cable mouse. There’s 2 side buttons on the left, a scroll wheel and a DPI button. The cable attached to the mouse is braided, lengthy and has a hook and loop strip which can be used to neatly tie up the extra cable length. The mouse lights up with an orange LED that breathes on and off in a cycle and this surprisingly, cannot be disabled even if you download and use the Rapoo V16 software.

The V16 is quite a standard gaming mouse. It doesn’t look out of the ordinary but the orange LED light does at least impart some level of flash to it. The orange LED lighting is however lacklustre. It’s nowhere close to being uniform and you can notice this when the orange is shining through the Rapoo logo on the back of the mouse. For a budget gaming mouse, we wouldn’t expect anything super amazing though. 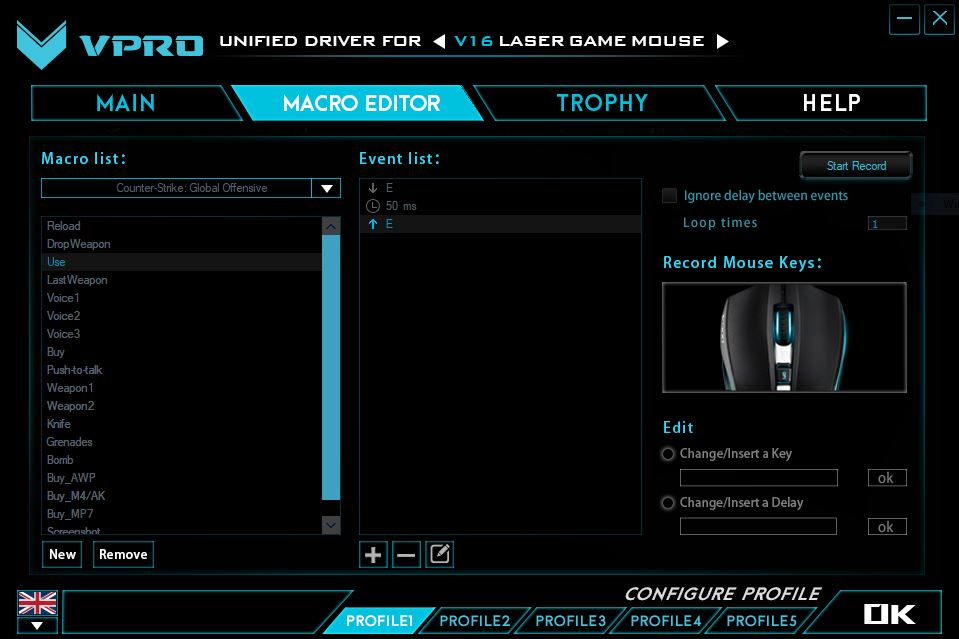 Using the mouse, the first thing gamers will notice is that the standard on-board DPI settings vastly differ. You’ll want to immediately download the Rapoo V16 software from their website and customize the DPI settings. Once you’ve done this, you can save up to 5 profiles onto the mouse itself. This means that you can then take your custom DPI settings with you in the future and use the mouse elsewhere, with the settings that you’ve saved onto it. Quite standard stuff for a gaming mouse these days to be honest.

...if you’re playing a competitive title such as CS:GO or Apex Legends, you’re not going to get the best experience here.

Gaming with the Rapoo V16 wasn’t exactly the smoothest affair. The 30 inch/s tracking speed isn’t exactly stellar so if you’re playing a competitive title such as CS:GO or Apex Legends, you’re not going to get the best experience here. With that said though, if you’re using the mouse for daily tasks or just general usage, it works fine. If you’re gaming with it, you’ll struggle every now and then with the mouse not keeping up with extremely fast actions. This is compounded with the fact that the lift-off detection is abysmal so if you’re going to be flicking it around on your mousepad, you’ll lose detection quite easily. The sensor used in the mouse clearly struggles with this. 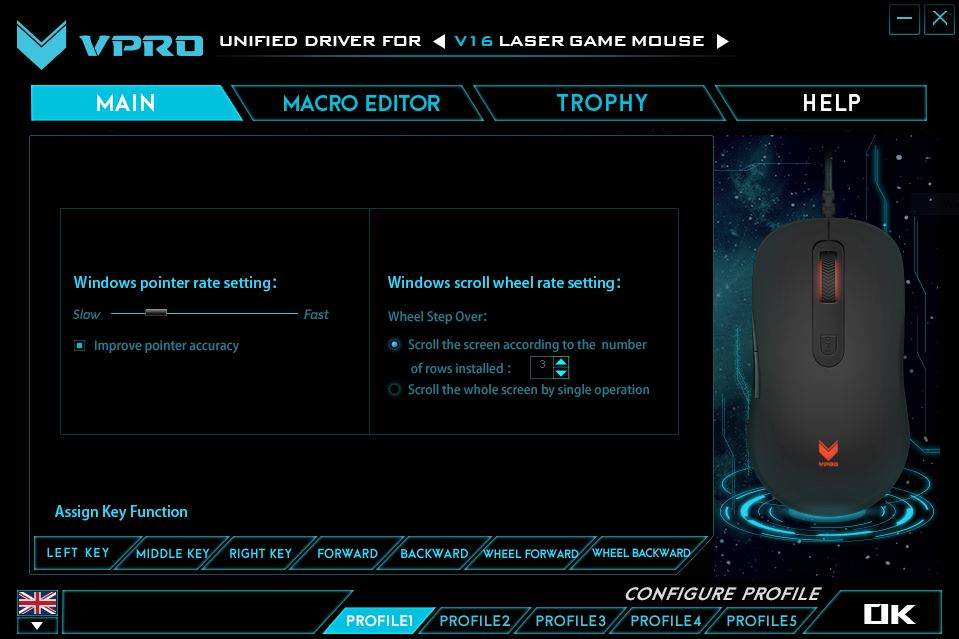 Rapoo’s V16 Software surprised us with its built-in Macros. There’s a list of presets that can be applied to the mouse for multiple popular games which includes CS:GO, Dota 2, League of Legends and Skyrim. Users can therefore assign preset macros to the left hand side buttons quite easily in the software. This is quite great for gamers out there that don’t want to fight with finicky software since they can simply just select an option from a preset and assign it.

The Rapoo V16 software does suffer from a slight problem in that the DPI adjustment doesn’t automatically apply after you move the slider. You’ll have to click “Ok” each time. This means that you’ll have to trial and error your way to saving your favourite DPI settings onto the mouse by adjusting a slider labelled as “Windows pointer rate setting”.

After using it for a gaming session, the back of the mouse will be covered in finger and palm prints and you’ll have to give it a wipe down.

The build quality of the V16 is nothing out of the ordinary. The mouse wheel is textured and does have some grip to it while the buttons do have a satisfying click. The rest of the mouse doesn’t exactly feel premium and unfortunately it is a fingerprint magnet. After using it for a gaming session, the back of the mouse will be covered in finger and palm prints and you’ll have to give it a wipe down. This is even more of a problem if your hands are prone to getting sweaty during gaming.

Overall, the Rapoo V16 is a straightforward, budget gaming mouse (20 Euros). It gets the job done but would honestly be put to better use as an affordable office mouse rather than a gaming mouse. 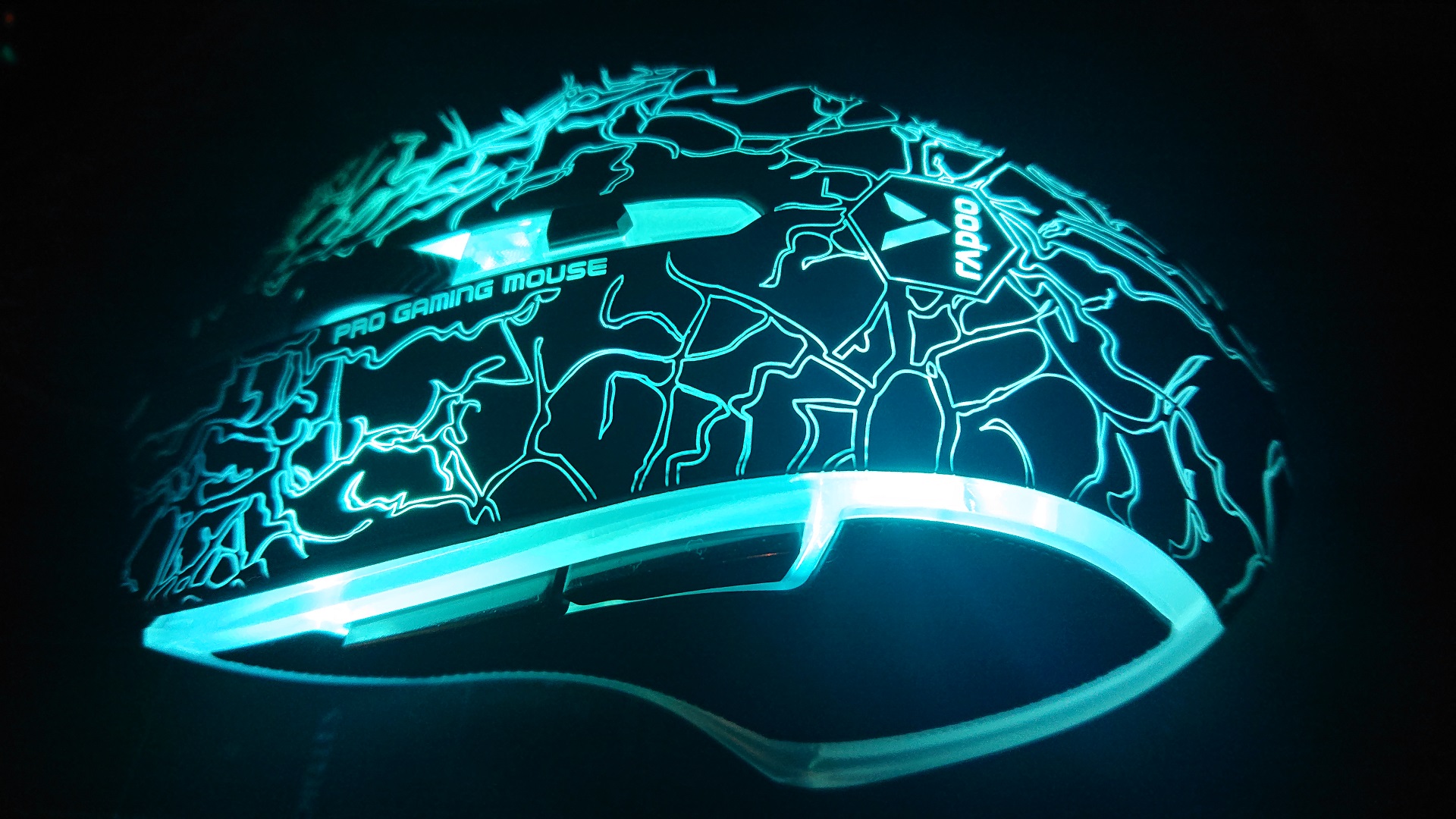 Now onto the pricier Rapoo V20S, coming in at around 30 Euros, this is the better pick. The feature set of this mouse is significantly better than the V16 and it even feels better in your hand straight out of the box.

After plugging in the V20S, the LED lighting will immediately kick in and it looks flashy. Unfortunately it suffers from the same uneven lighting that the V16 had. Users can clearly see there’s 4 LEDs contained within 4 specific spots and these light up the rest of the mouse through the clear plastic and patterned back.

The mouse is described as being ergonomically designed and ambidextrous...

The V20S also features a braided USB cable with a hook and loop strip attached to neatly tie up excess cable. This mouse also only has 2 extra buttons on the left hand side but does feature rubberized grips on either side. The mouse is described as being ergonomically designed and ambidextrous, however, that is a bold claim given the fact that there’s 2 buttons on the left side and only on the left side. For some strange reason, the sensor on the V20S is also off centre. 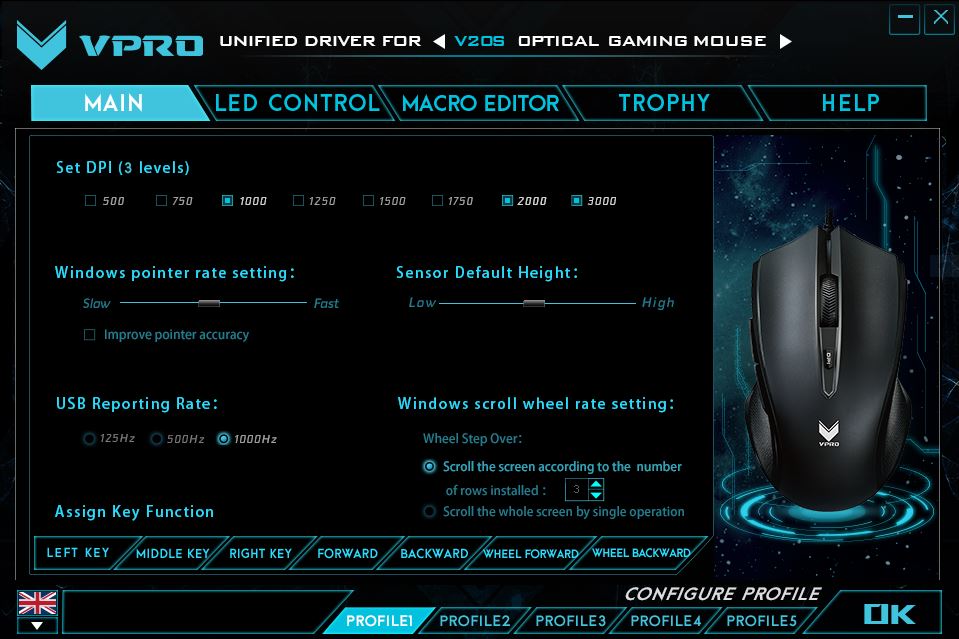 Using the Rapoo V20S software, users will have a similar experience as with what was mentioned above with the V16 software. The difference this time being the fact that there’s LED lighting options available and far more customizable DPI settings. You can also adjust the lift-off sensor height which is incredibly important if you’re planning on using this for actual gaming. The V20S also allows you to edit macros and save your profiles in the same way as the V16 software. 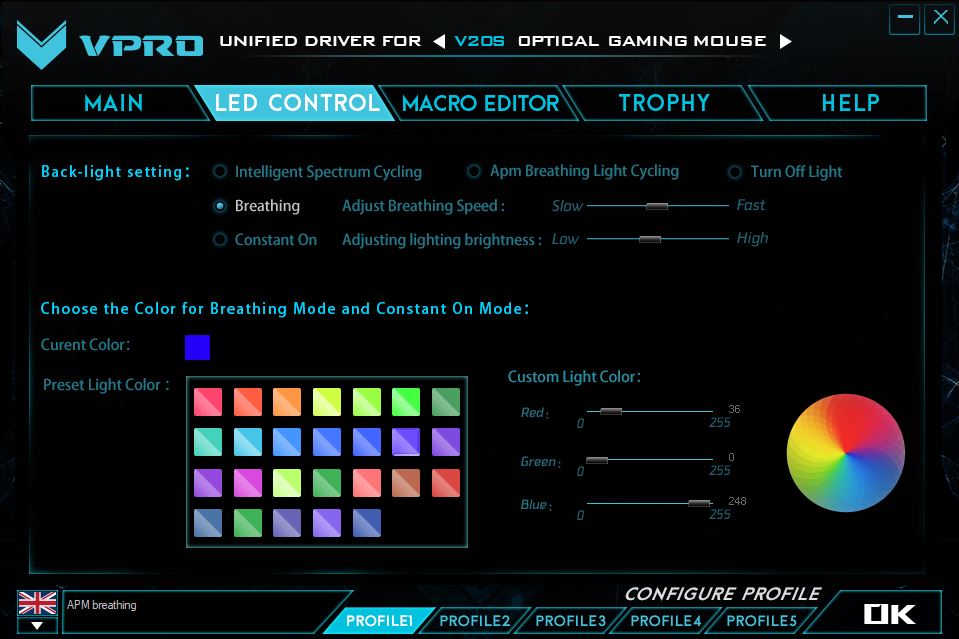 Using the V20S for gaming, it felt a whole heck of a lot better than the V16 did that’s for sure. The sensor is clearly better, movement smoother and the lift off detection was definitely not as abysmal as before. If you have the choice between purchasing the V16 or the V20S, definitely opt for the V20S because plain and simply put, it is the far better mouse between the two.

After using both mice, the verdict is that the V20S is way better...

The mouse wheel on the V20s is also textured and feels fine in use and the buttons all have a satisfying click to them albeit being somewhat loud. After using both mice, the verdict is that the V20S is way better but the higher price might put off those that are looking for something extremely cheap. The V20S’s price in particular puts it very close to a premium brand such as Corsair’s most budget offerings which makes it a hard sell when Corsair’s mice deliver much better performance across the board. 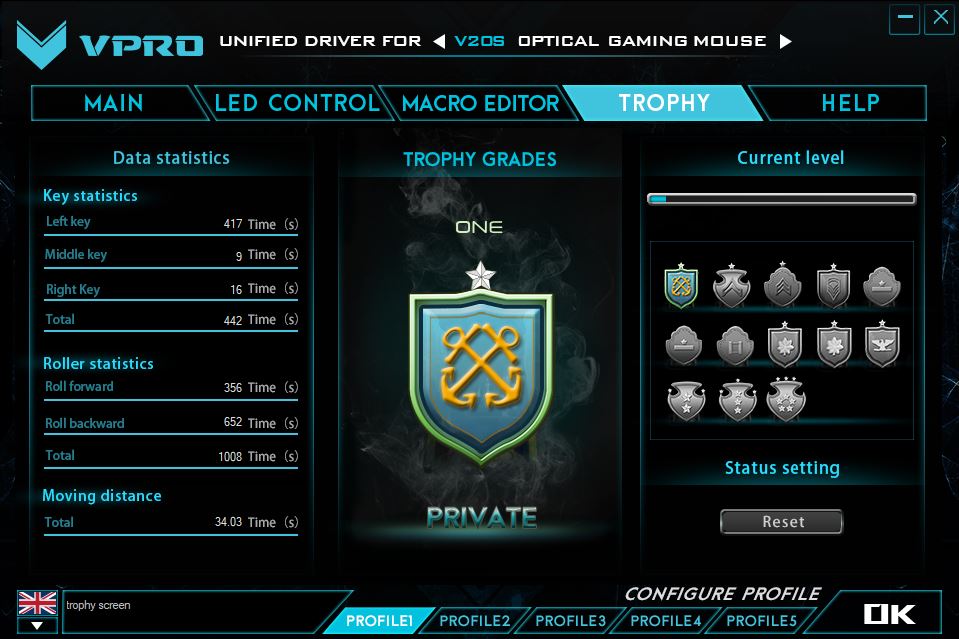 Scoring both of these mice based on their price point and what’s available at that price point, they are solid 6/10s respectively with the V20S being significantly better than the V16 (The V16 competes with some really budget mice though at its price point...). If you compare these mice to more premium offerings from other brands, you really do get what you pay for so do keep that in mind when making a purchase.
6