Ace In The Hole. 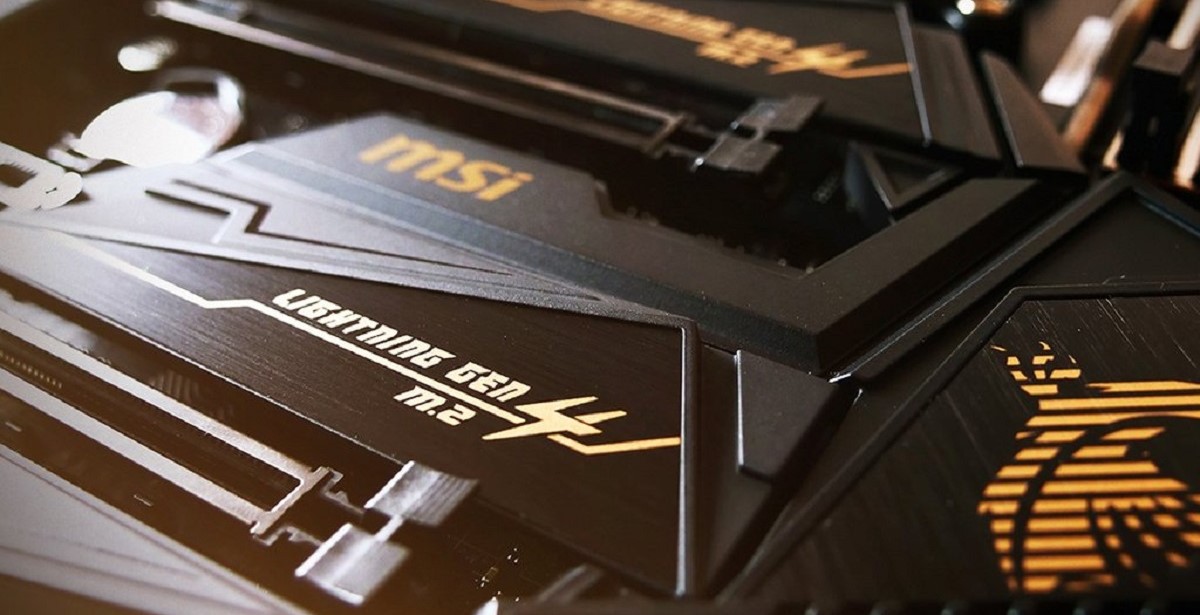 A motherboard, a critically overlooked piece of hardware - misunderstood, more so - is the Central Nervous System of the PC. Higher-end motherboards are often scoffed at, labelled as just for PC enthusiasts who spend more time in the BIOS than actually using it. However, the MSi MEG X570 ACE shows that a high-end motherboard should be in everybody's PC. 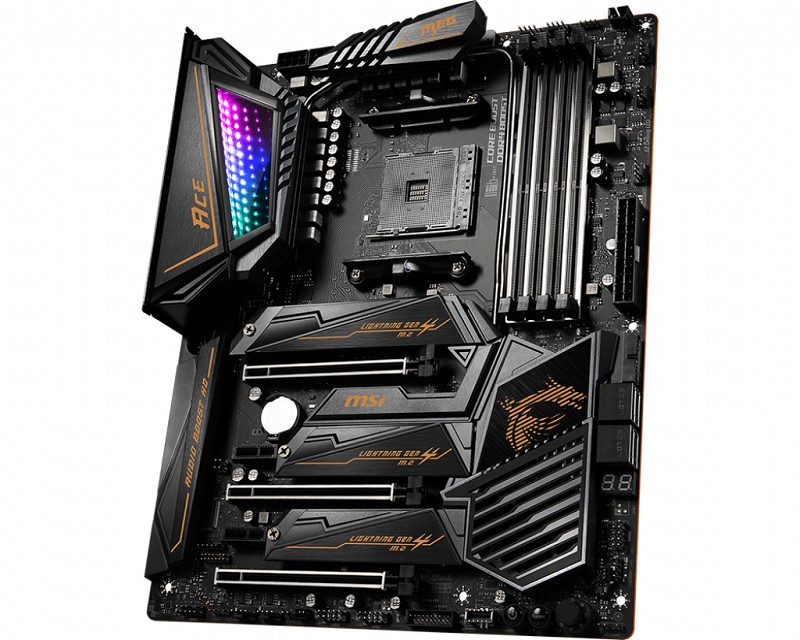 The MSi MEG X570 ACE is dedicated to supporting the new Ryzen 3000 chips, but unfortunately, we were not able to secure a chip for testing at the time of writing this review. However, we thought this would be a great opportunity to see what the new line MSi motherboards can offer current Ryzen 2000 users - like myself - and if it would be worth our time.

The MSi MEG X570 ACE offers a redesigned heatsink design over the previous X470 generations, as well as its own fan for cooling. Furthermore, it offers a built-in I/O shield, making installation easier, and safer as well. Adding to convenience, the X570 offers an internal Wi-Fi 6 solution, so that you don't need to worry about pesky network adapters, with an antenna to aid in the edgy aesthetic, rather than the traditional two rods - giving you up to 2400Mbps network speed.

The X570 offers Core Boost technology, which regulates power delivery to the CPU, ensuring that every drop of performance can be squeezed from your CPU.

The X570 ACE offers two 8-pin CPU connectors to meet the TDW needs of the Gen-3 Ryzen chips, but separate connectors also mean support for the older Ryzen 2000 chips, as well as low TDW Ryzen 3000 chips. Thanks to the server-grade PCB and the IR Digital PWM, as well as the enhanced power delivery throughout the board, the X570 ensures stable and durable power delivery to all components for optimal performance. Also, the X570 offers Core Boost technology, which regulates power delivery to the CPU, ensuring that every drop of performance can be squeezed from your CPU. 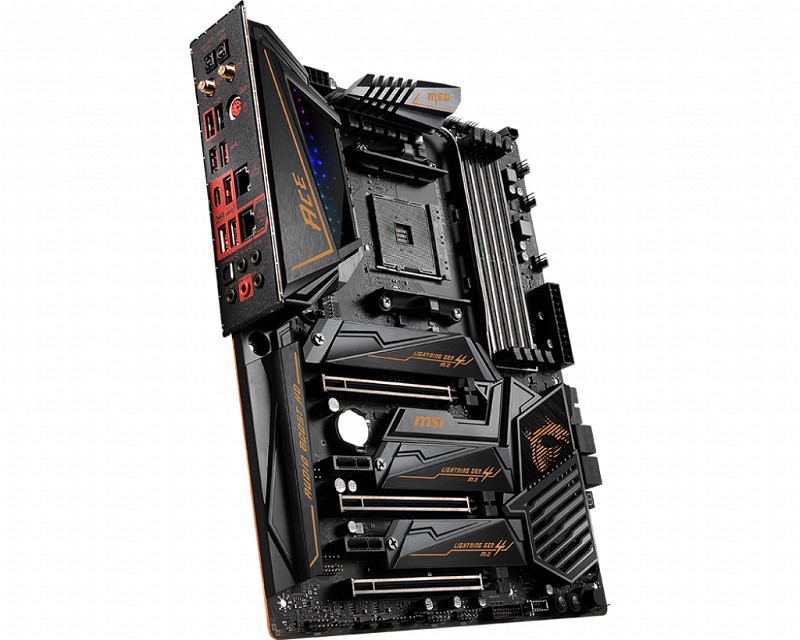 One of the most exciting innovations brought in with the new Ryzen 3000 chips is the support for PCIe Gen 4, offering faster transfer speeds and more stable connections. Thankfully, MSi has also included PCIe Gen 4 support on their X570 ACE, giving you up to 64 GB/s maximum transfer speed through M.2 drives.

As we touched on very briefly earlier, the MEG X570 ACE offers a through, and redesigned, cooling solution, using MSi's staple Frozr technology system, along with a new Frozr Heatsink design, to actively remove heat generated by the motherboard, through the built-in fan. The heat pipe has always been enlarged, extending from the MOS heatsink to the chipset heatsink, providing superior cooling, compared to the previous X470. The cooling extends to the three M.2 slots on the board, offering MSi's patented Shield Frozr thermal solution, boosting performance through preventing thermal throttling.

Thankfully, MSi has also included PCIe Gen 4 support on their X570 ACE, giving you up to 64 GB/s maximum transfer speed through M.2 drives.

The first thing we looked at was the performance gain from the PCIe Gen 4 support in the M.2 drives. We used the recently released Seagate FireCuda 510 2TB NVMe SSD in the upper slot, and the Seagate BarraCuda 510 512GB NVMe SSD in the second. Transferring between the drives was almost instantaneous, and transferring between one of these and a standard SATA SSD, maxed out at the 500mb read/write of the SSD's, but the stability in large files was the impressive part. 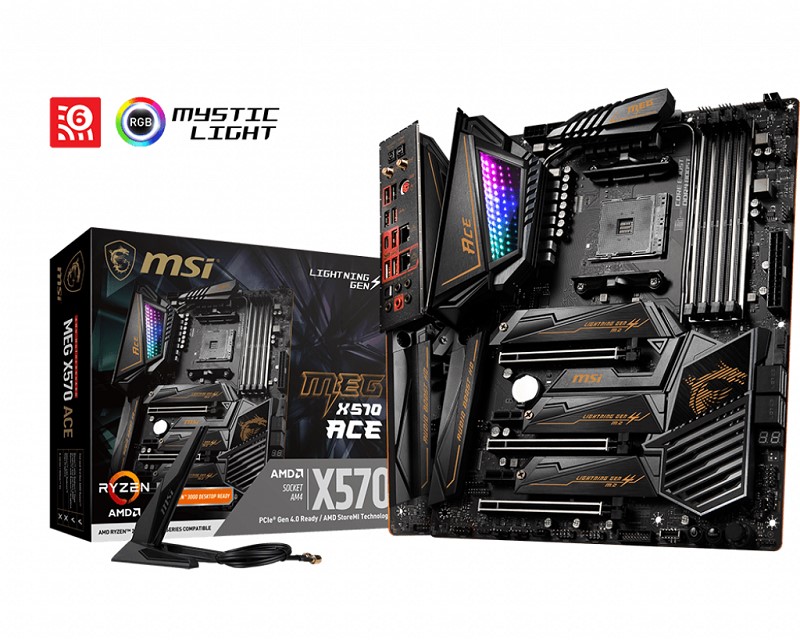 The support for 2nd Gen Ryzen chips was equally impressive, as the Ryzen 2700 we tested was a simple drop-and-go. There were no drivers needed to get things working, but we did update drivers - as you should - to ensure that the board and CPU communicated effectively. It is somewhat sad to see that the new X570 chipsets don't support Gen 1 Ryzen chips, and I hope that AMD add that support in at a later stage, but it does also make sense.

The support for 2nd Gen Ryzen chips was equally impressive, as the Ryzen 2700 we tested was a simple drop-and-go.

In terms of overclocking, the Ryzen series of CPU's never really offered that much overclocking headroom, but that's down to AMD making extra performance readily available for everyone. However, I was able to push the Ryzen 2700 to 4.3GHz stable, and while I could have attempted to push further, I didn't feel it was worth the performance gain for possible crashing. Pushing the DRAM was super easy, as all I needed to do was activate the X-AMP profile -of which there were two; one for 2933MHz, and the other for 3200MHz - which boosted RAM frequencies to a stable 3200MHz. For this test, we used the G. Skill Trident Z RGB 16GB kit, and thanks to the stability of the RAM, the X570, and the CPU support, I was able to push past this on manual overclocking to a cool 4000Mhz with some slight performance drops, and a stable 3600Mhz at peak performance. However, the X570 ACE does support up to 4600Mhz RAM frequency, and 128GB capacity.

When it comes to design, the X570 ACE conforms to a more elegant and upper echelon appeal, with a smooth black finish across the board, with gold/brown trim, accents, and decals around the board. Further adding to the design is the Inifinity mirror on the I/O heatsink to give the board that extra sense of depth. 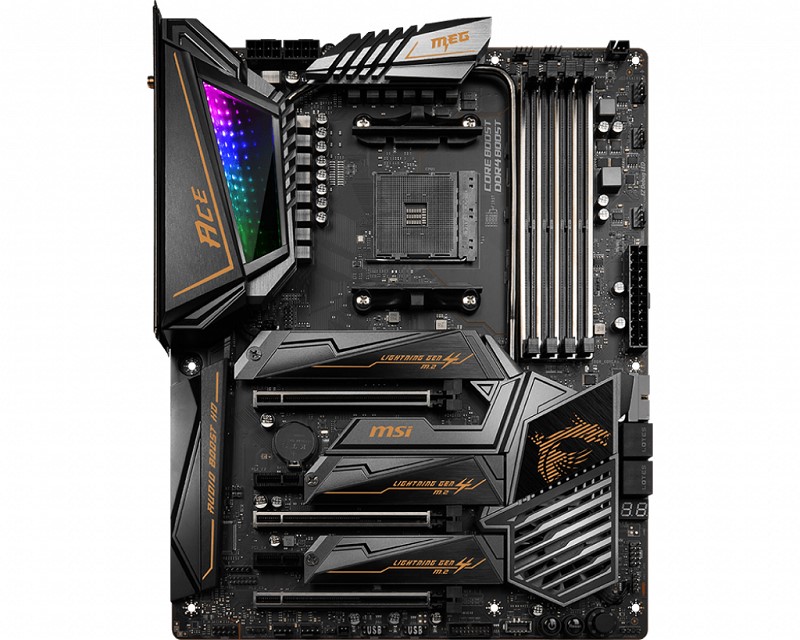 The layout remains the same from models before, and I welcome this with open arms, because there is nothing worse than having to redo cable management when upgrading a motherboard. However, the standard layout made it easy to re-install cables from the front I/O, SATA drives, and, of course, all the millions of fans we usually have in our cases.

The RGB support through MSi's Mystic Light software offers the chance for your to make the lighting your own, as well as synchronising your lighting across all supported devices. Thankfully, the RGB wasn't intrusive, as the only real source of light that you will see is the gorgeous infinity mirror, as well as other lighting you have in your system.

Further adding to the design is the Inifinity mirror on the I/O heatsink to give the board that extra sense of depth.

Overall, The MSi MEG X570 ACE is a perfect entry for those looking to enter the extreme motherboard ecosystem, but thanks to MSi's simplification of the BIOS, the layout, and the beautiful design, it's isn't intimidating to newcomers. The support for Ryzen 2nd Gen is excellent, with a simple drop-and-go system, and the convenience of built-in I/O shields and WiFi solutions makes setup a breeze. Lastly, the build quality offers the piece of mind that no matter what component you put on the X570 ACE, you are getting the most out of it.
9.5

Lack of support for Gen-1 Ryzen

Tebulot
This thing is a beaut <3