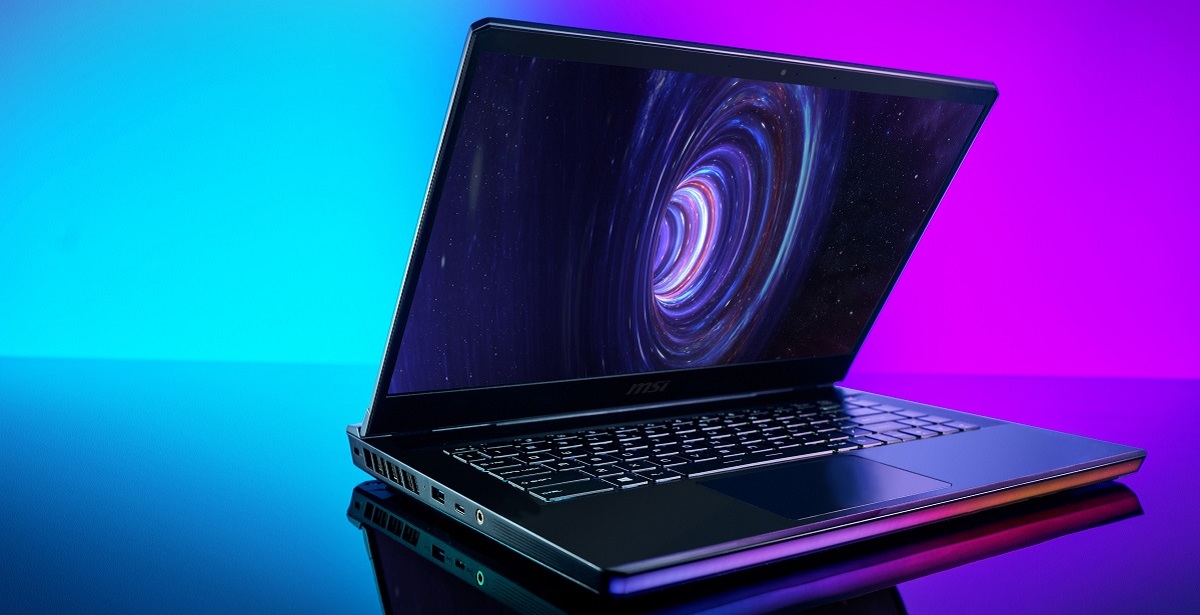 A year has passed since I reviewed the MSi GE65 Raider here at Nexus Hub. MSi’s innovation train never stops though and their refreshed 2020 edition MSi GE66 10SFS Raider is just as much as a powerhouse as the previous iteration was. Of course, being a newer model, it packs even more punch now with a superior processor and graphics card. 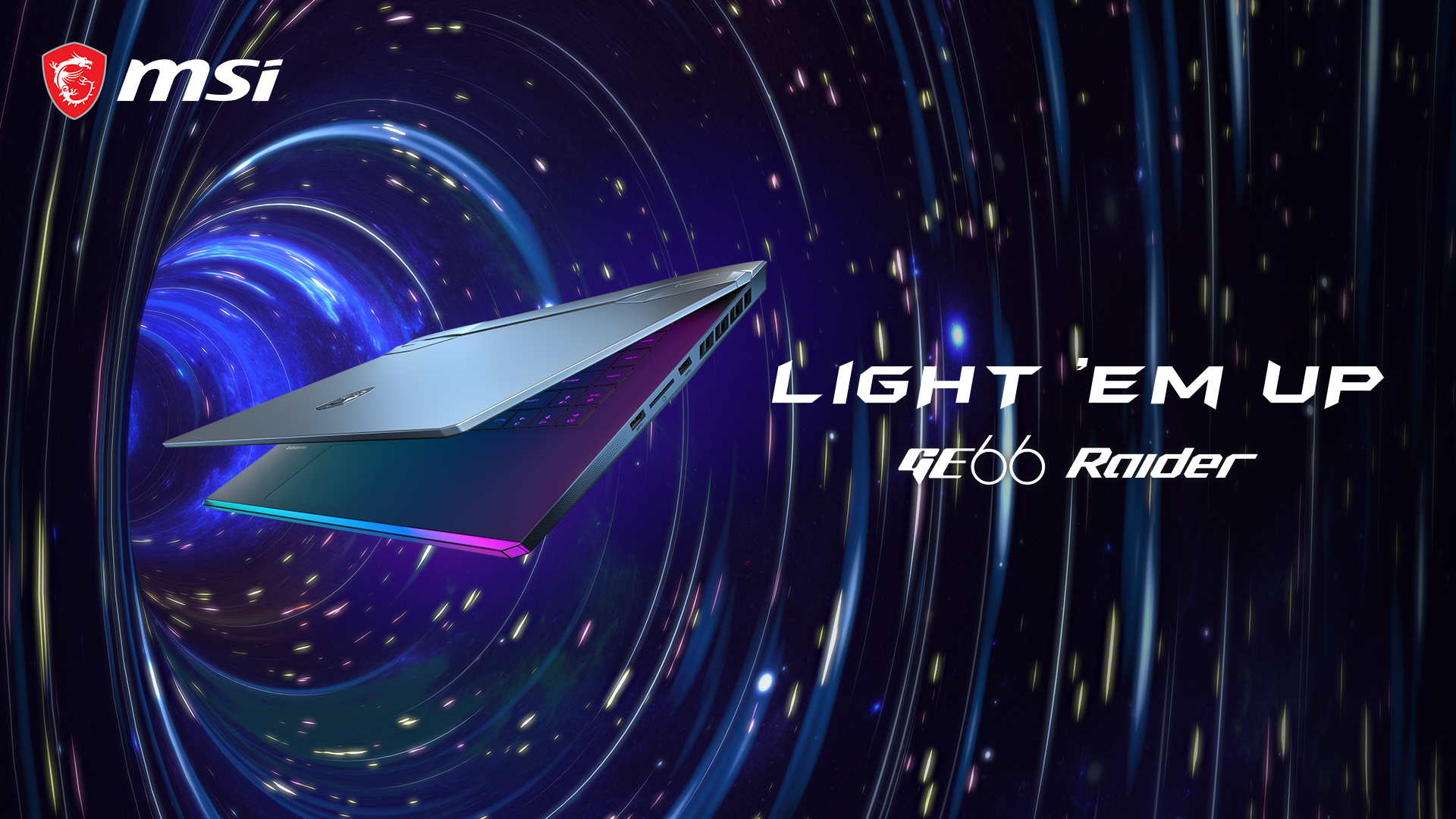 As with most high-end gaming laptops released this year, the GE66 10SFS is sporting Intel’s 10th generation i7 10875H. The processor is a significant step up over the older i7 9750H since it features 8 Cores and 16 Threads now instead of the older generation’s 6 cores 12 threads. The GE66 variant we were sent to review contains 16gb of DDR4-3200 RAM paired with an Nvidia RTX 2070 Super with 8GB GDDR6 and a 1024gb NVME drive. Quite beastly, huh? The full list of technical specs are as follows.

In direct comparison with last year’s model, the GE66 10SFS has a far more refined premium aluminum aesthetic. The GE66 10SFS features an RGB lightbar on the front and it’s all about the flashy looks this time around, especially when that lightbar is enabled. More on this later though. Looking at the laptop from the front while opened, the first thing many users will notice is that the 2020 Raider has dropped the numpad from its keyboard. This might annoy those of us who prefer having a numpad on our laptops, especially when doing work in Microsoft Excel. The keyboard featured on the laptop is from Steelseries and it does feel great to type on though. Users should note that the keyboard is not mechanical, so if you’re expecting crunchy keys you won’t find that here. 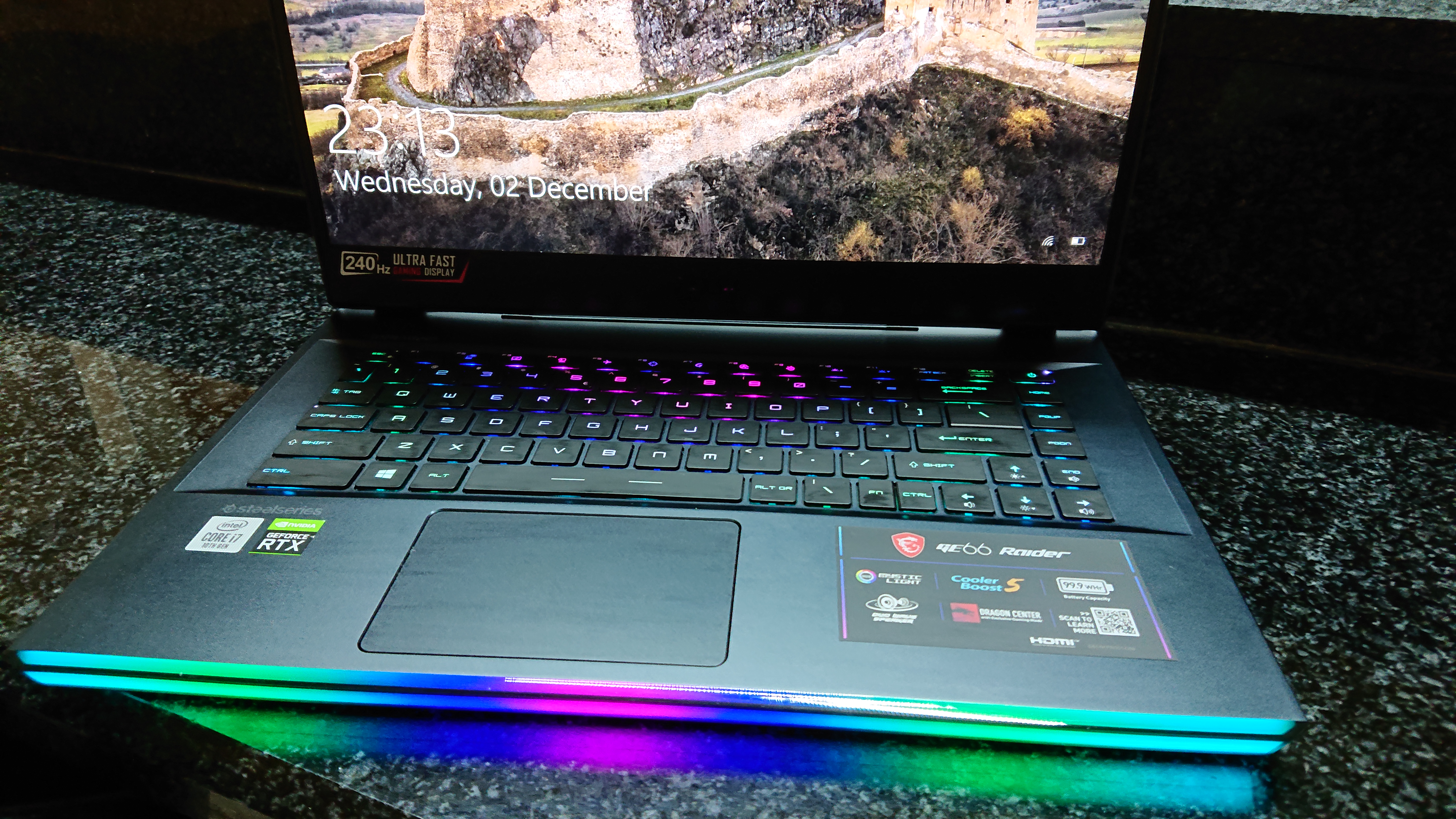 From the bottom, the laptop features a new hexagon-esque pattern of vents. The back section features air vents and fairly standard I/O ports as mentioned in the technical specs above. The vents are strategically placed to direct hot air away from you while using the laptop. The entire laptop itself is quite light and weighs in at 2.38kg. This is great if you’re going to be lugging it around quite often. The laptop’s power brick is quite large but the laptop is packing a hefty 99.9 Whr battery which should keep you going until you’re able to find a plug point. 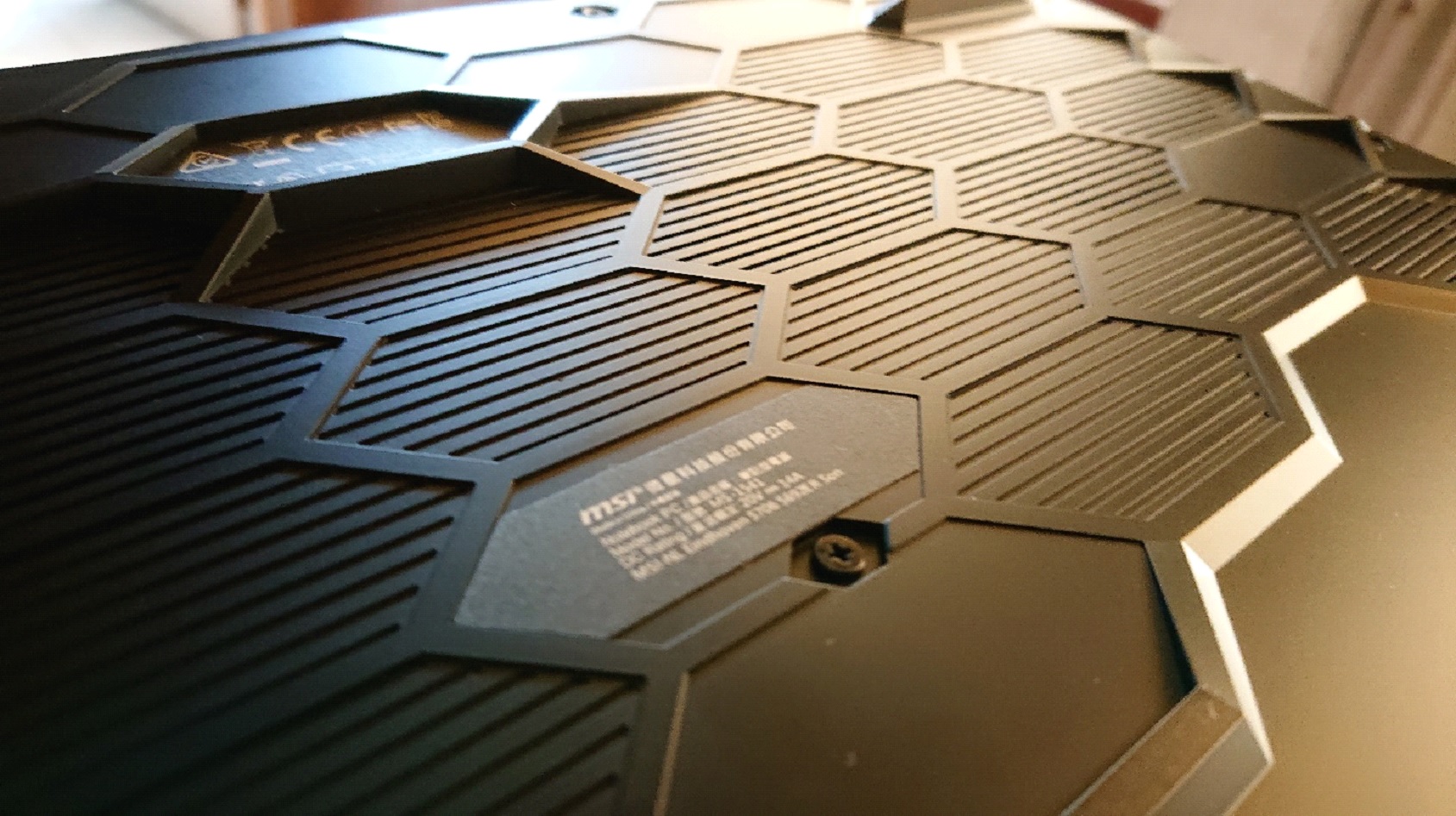 Onto the lightbar mentioned above. The MSi GE66 10SFS Raider features a “Panoramic Aura Lighting” system that’s Mystic lighting enabled. MSi stated that this grants granular control over lighting, creating virtually endless combinations in 16.8 million colors. They aren’t wrong about this. Users can create their own custom lighting combinations in the Steelseries Engine 3 or via MSi’s dragon centre. In our testing, we had to fully reinstall MSi Dragon Centre because it refused to work properly upon launching the application. Changing the lighting in Steelseries Engine 3 however was a breeze and yes, you can actually disable it completely if you want to cool it with the “Disco Disco” effects during business meetings. 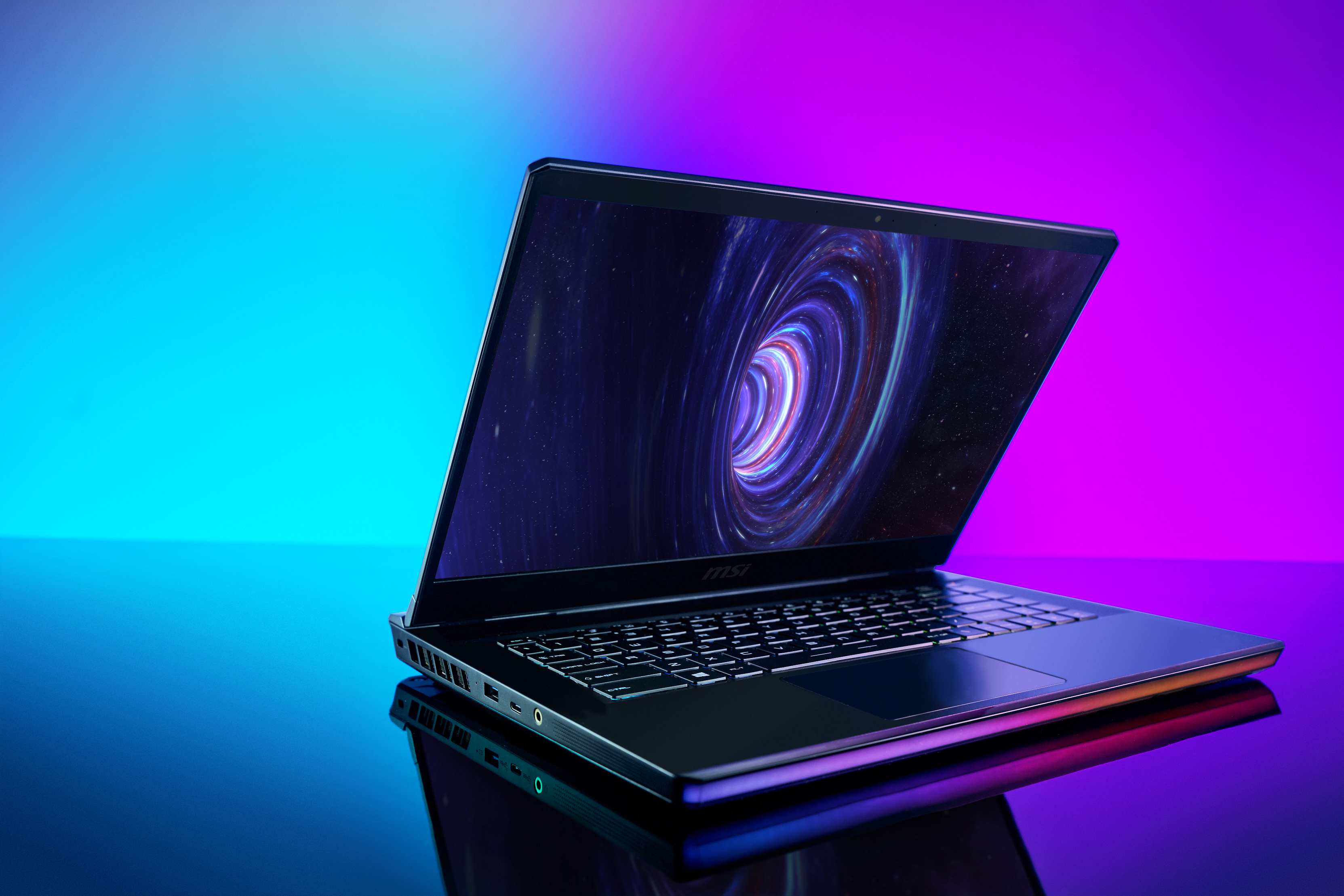 With all that said though, the lightbar is a stand-out aesthetic feature of the laptop and it will surely attract quite a lot of attention if you keep it set on its default “Aurora” setting. The RGB on the keyboard itself is quite bright and users may want to set it to a more subdued colour for night time typing or to conserve more battery power. The keyboard will take some getting used to though since there’s no numpad and there are some additional “Fn” functions such as a hotkey to launch the Steelseries Engine. 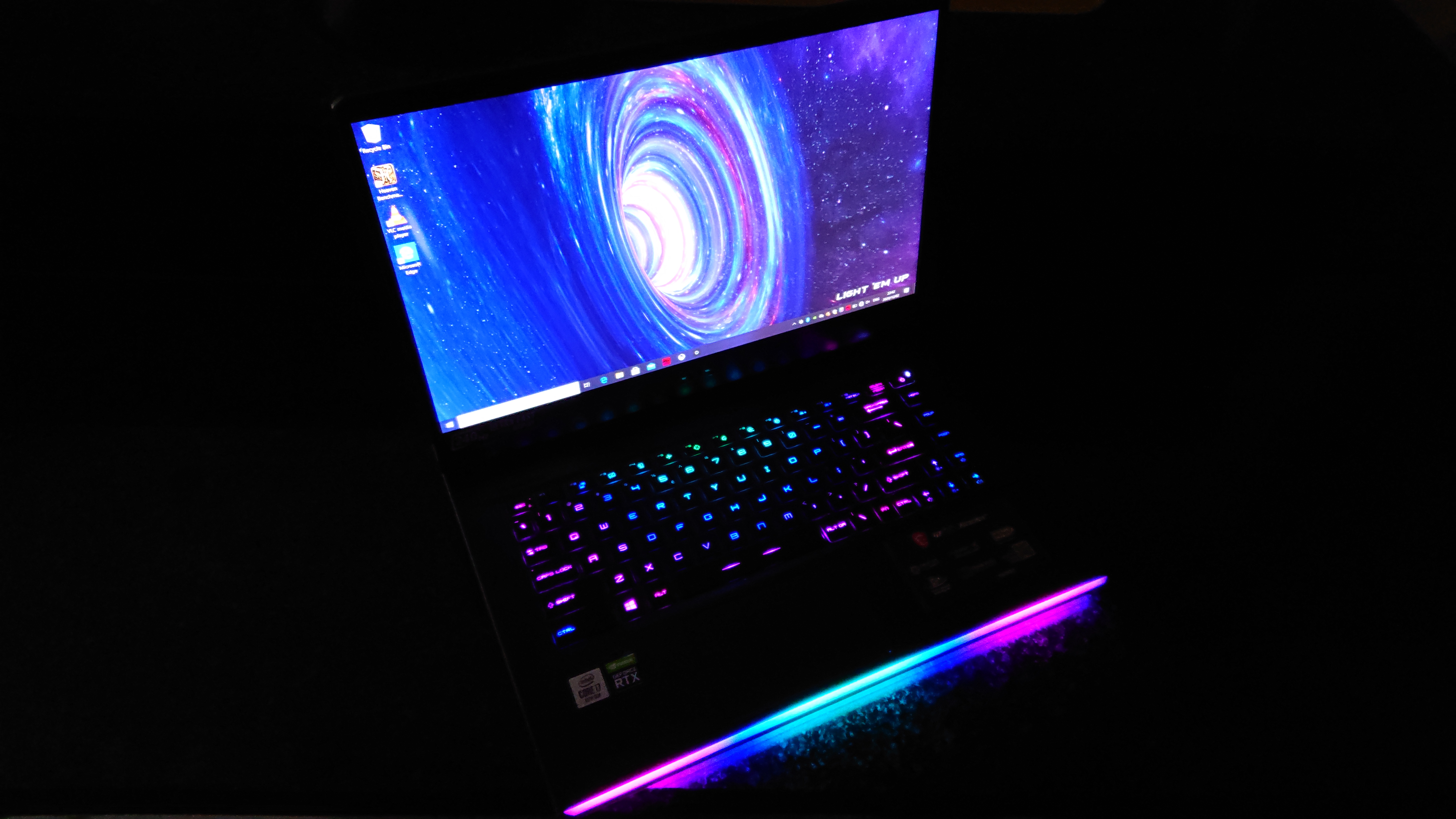 The touchpad of the laptop is perfectly positioned, well-sized and is incredibly responsive. Using it felt great and while there aren’t any dedicated left and right mouse buttons on the touchpad, this doesn’t affect its usage much since it registers clicks perfectly fine in the correct region when depressed.

As with the previous generation of the Raider, the aluminum used in the chassis is prone to fingerprint marks but these can easily be wiped away. The power button is located in the back right-hand side corner of the keyboard and as with other MSi laptops, has a minuscule power indicator LED located right next to it.

The MSi GE66 10SFS’s overall design is a lot more “Premium” looking than last year’s iteration. With the RGB lighting disabled, it looks like a high-end notebook but doesn’t announce to the world that it’s a “Gaming” laptop. This could fit right in in any office so long as you have the lightbar disabled. Having thick rubberized feet at the bottom is also a plus point so as to prevent scuff marks on the new hexagon shaped vents on the bottom part of the chassis. The feet also help ensure that there’s adequate airflow coming in from underneath the laptop. 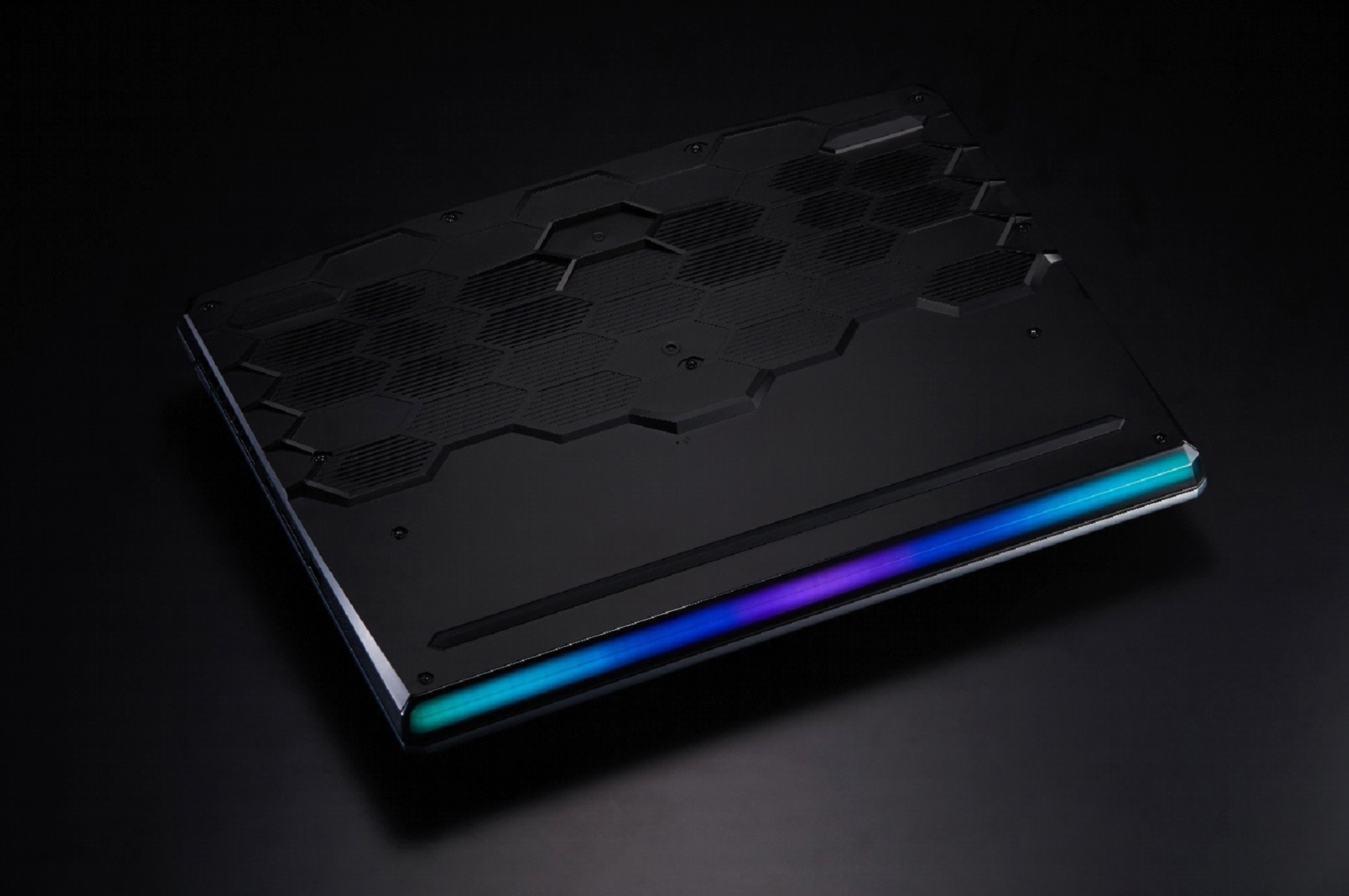 The screen featured on the laptop is a 15.6” Full HD (1920x1080), 240Hz, IPS-level gaming display with thin bezels. Pretty much the same as last year’s iteration. Gamers will still enjoy this and can even opt in for a 300Hz display instead should they so choose. The GE66 10SFS can easily be carried around daily and is competing with MSi’s own GS66 Stealth in terms of portability. 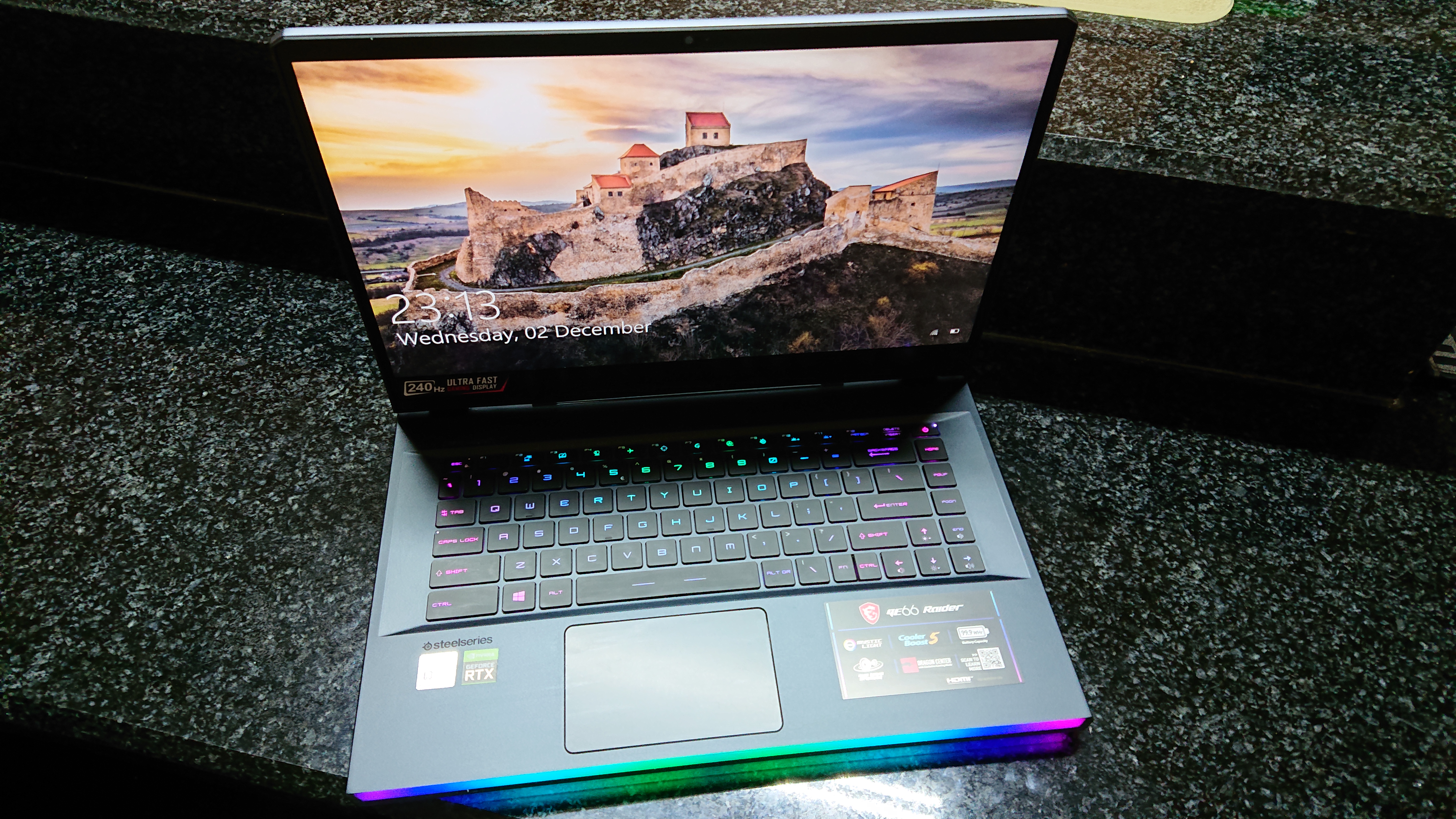 The GE66 10SFS’s tagline is “Light ‘em up” and light ‘em up it shall. The laptop is targeted at enthusiast gamers who want beastly performance and lightweight portability. The 10th generation i7 10875H, 16gb of DDR4-3200 RAM and Nvidia RTX 2070 Super means that there isn’t much out there right now that will struggle to run on the new Raider at 1080p.

Running a series of benchmarks tests was a breeze with the GE66 10SFS since it performed as expected across the board. In Cinebench R20, the Raider yielded an impressive score of 3500 with performance mode selected and on battery power. 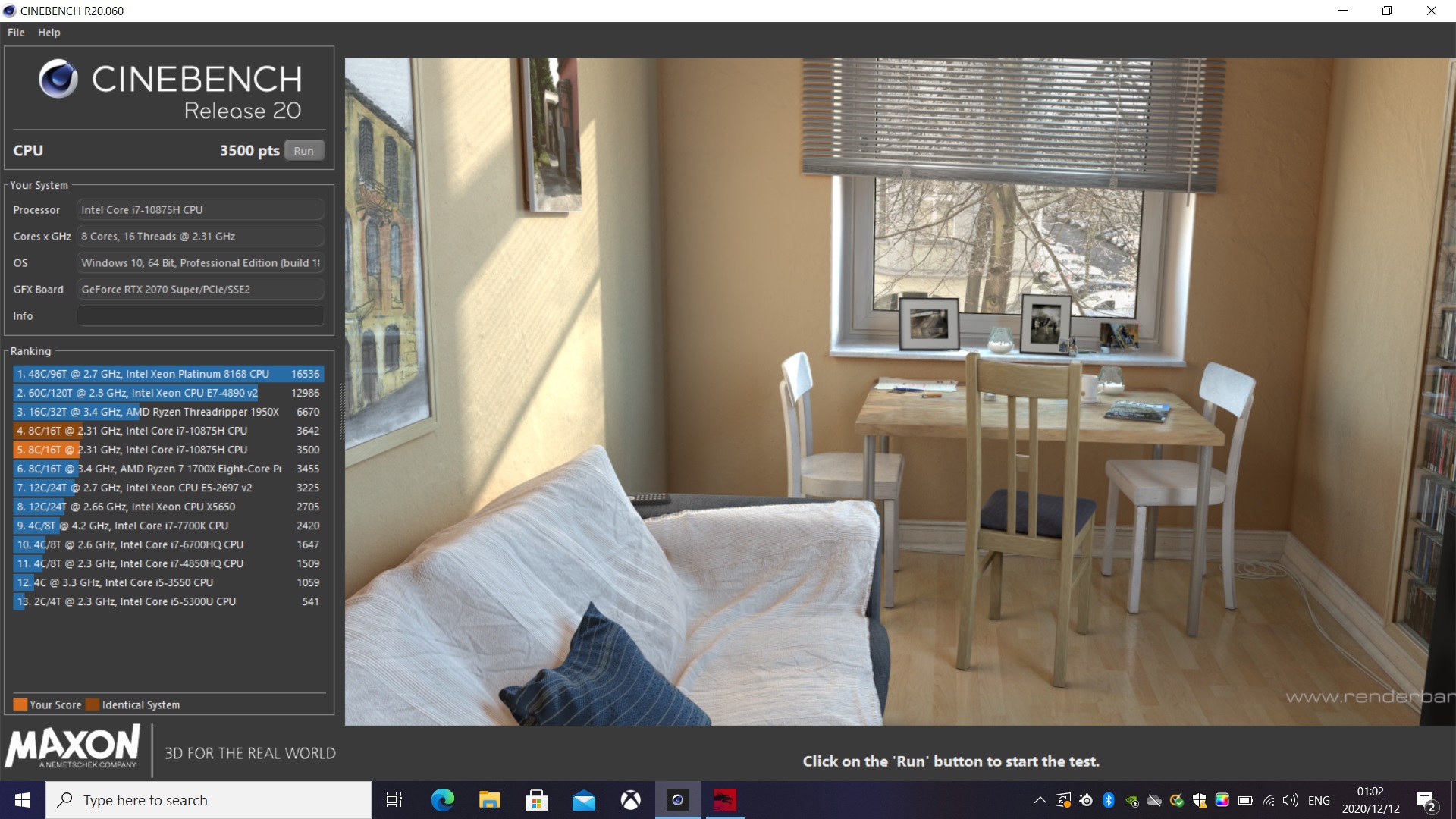 Running the same test again when plugged in took this total even higher and yielded a score of 3870. That is a ridiculously massive improvement over last year’s model which had a high score of 2413 when plugged in. 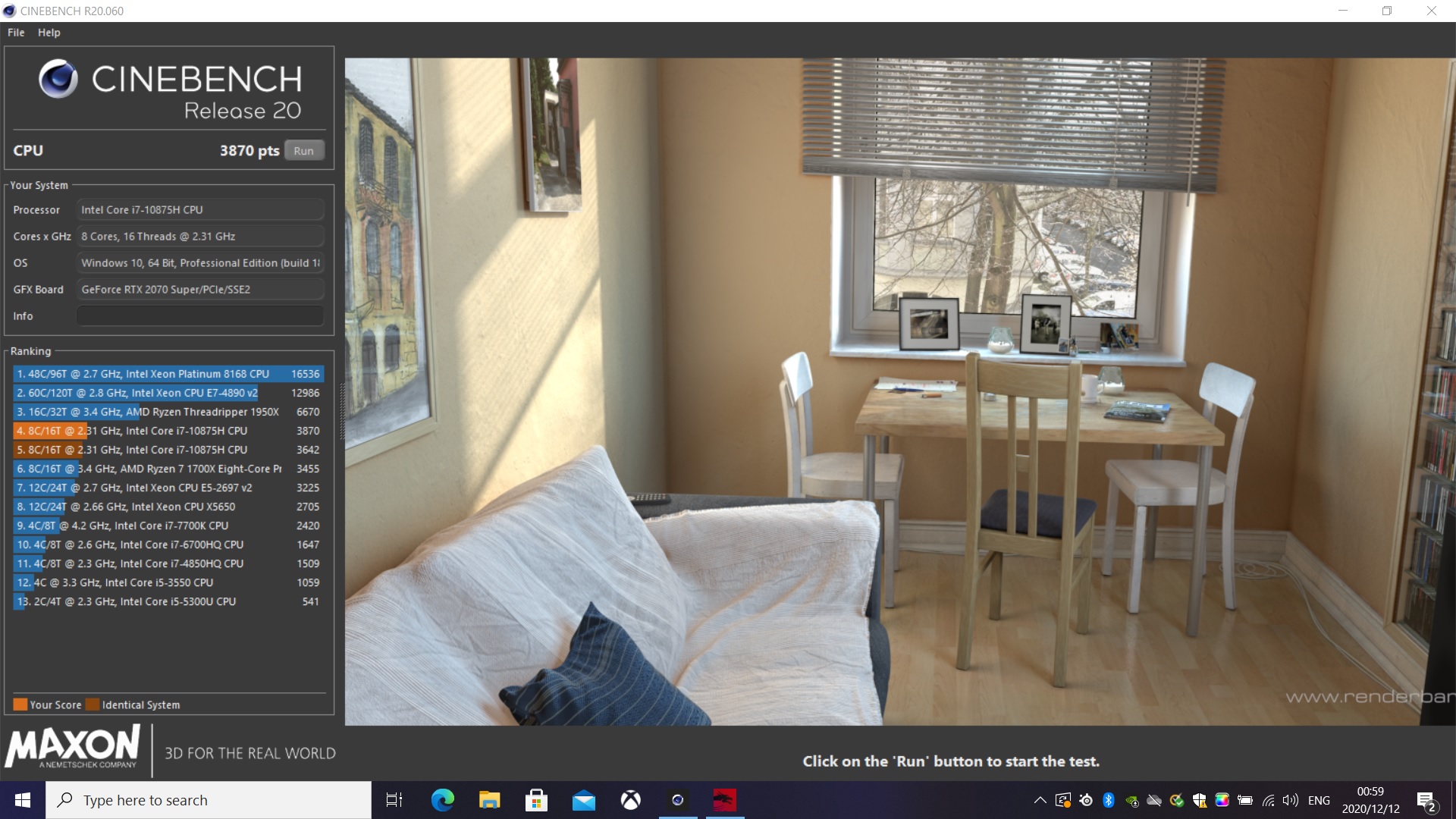 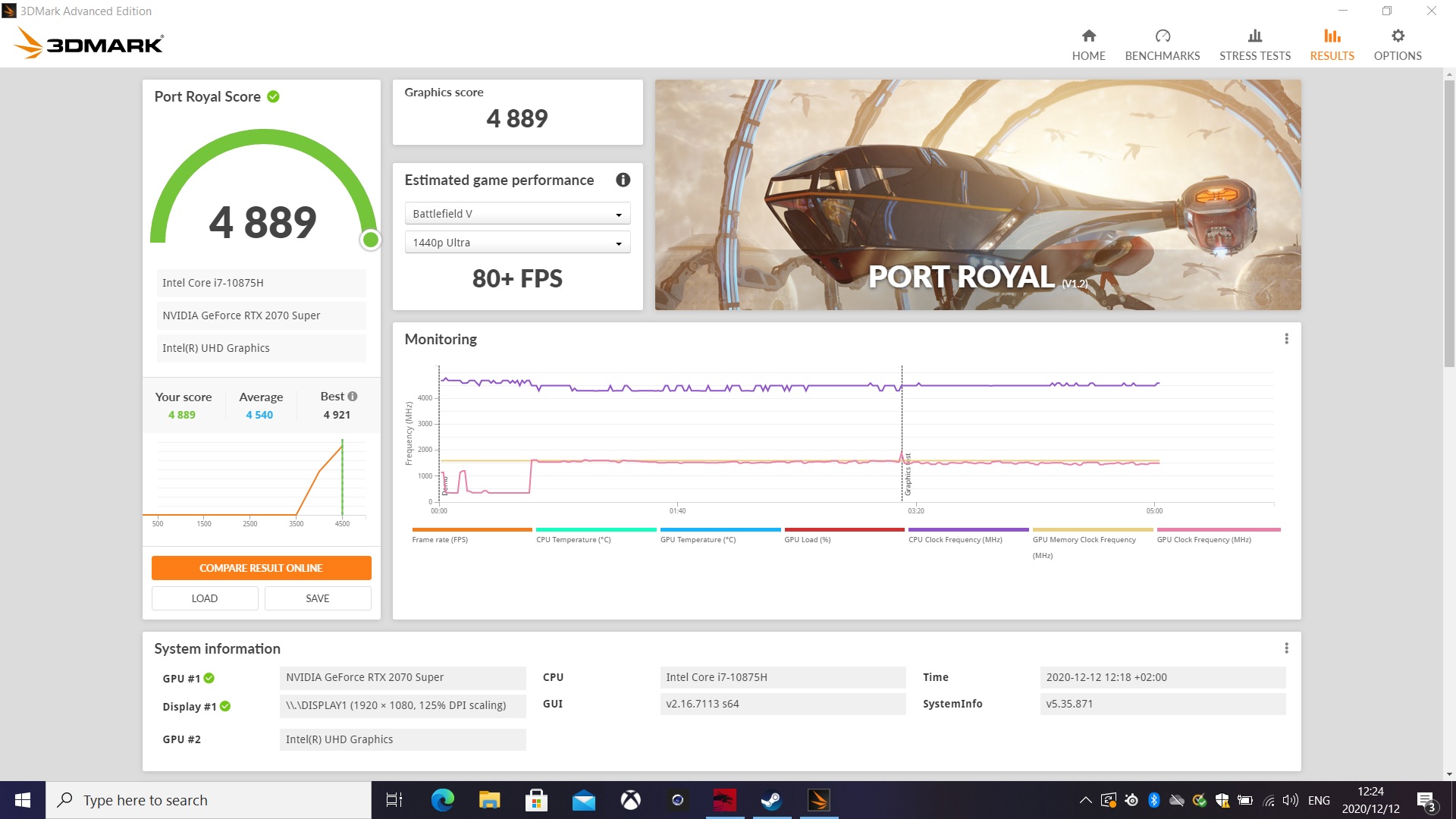 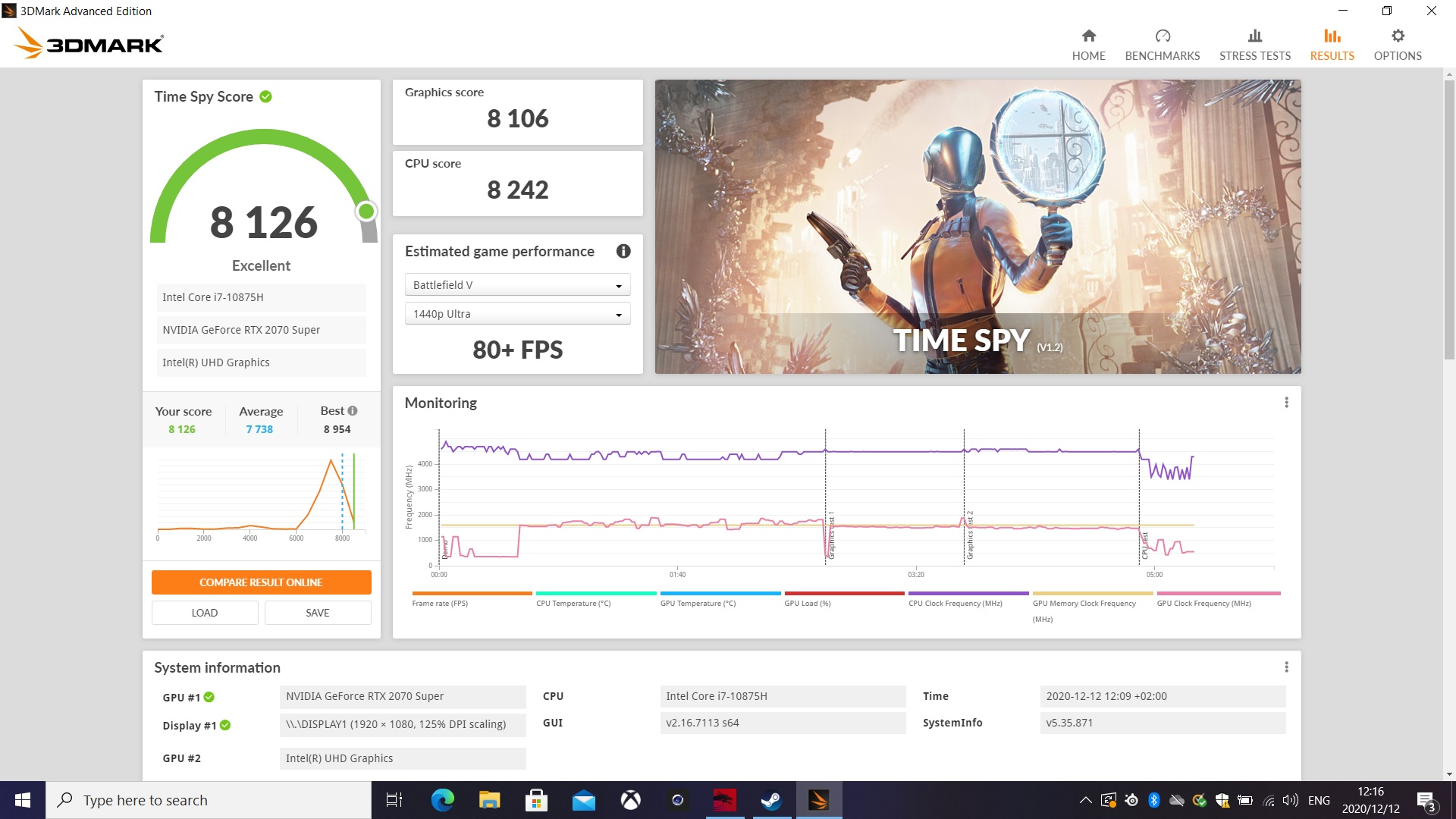 These were great scores and clearly the MSi GE66 10SFS is capable of chewing through anything. To test this even further, we opted to run Control, with all settings maxed out including Raytracing. The laptop successfully ran this without any problems and produced framerates well above 60 FPS. Running games on battery power is not recommended since you’ll deplete the battery incredibly fast but if you’re using the GE66 10SFS when plugged in, you’ll certainly get excellent performance. 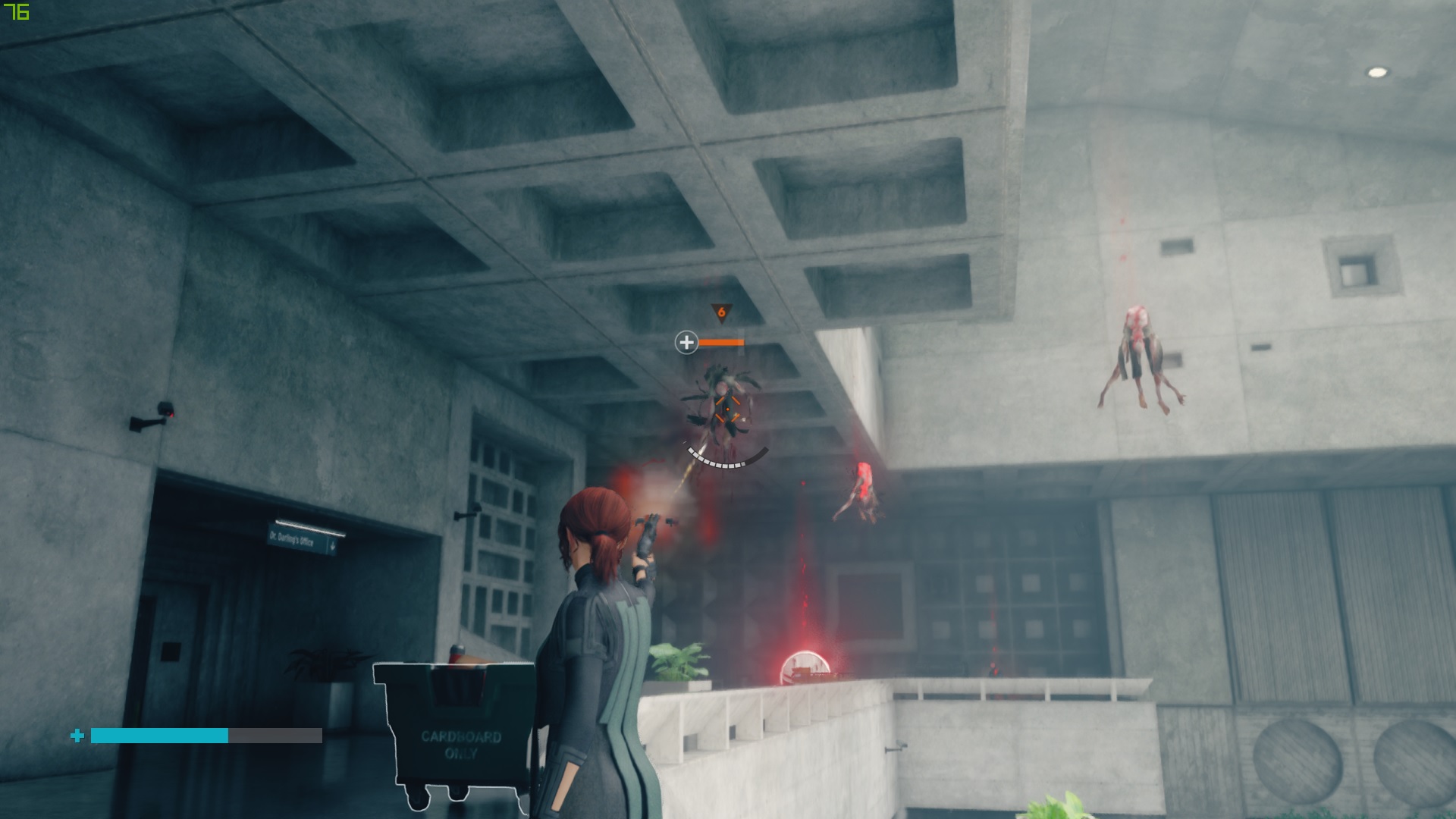 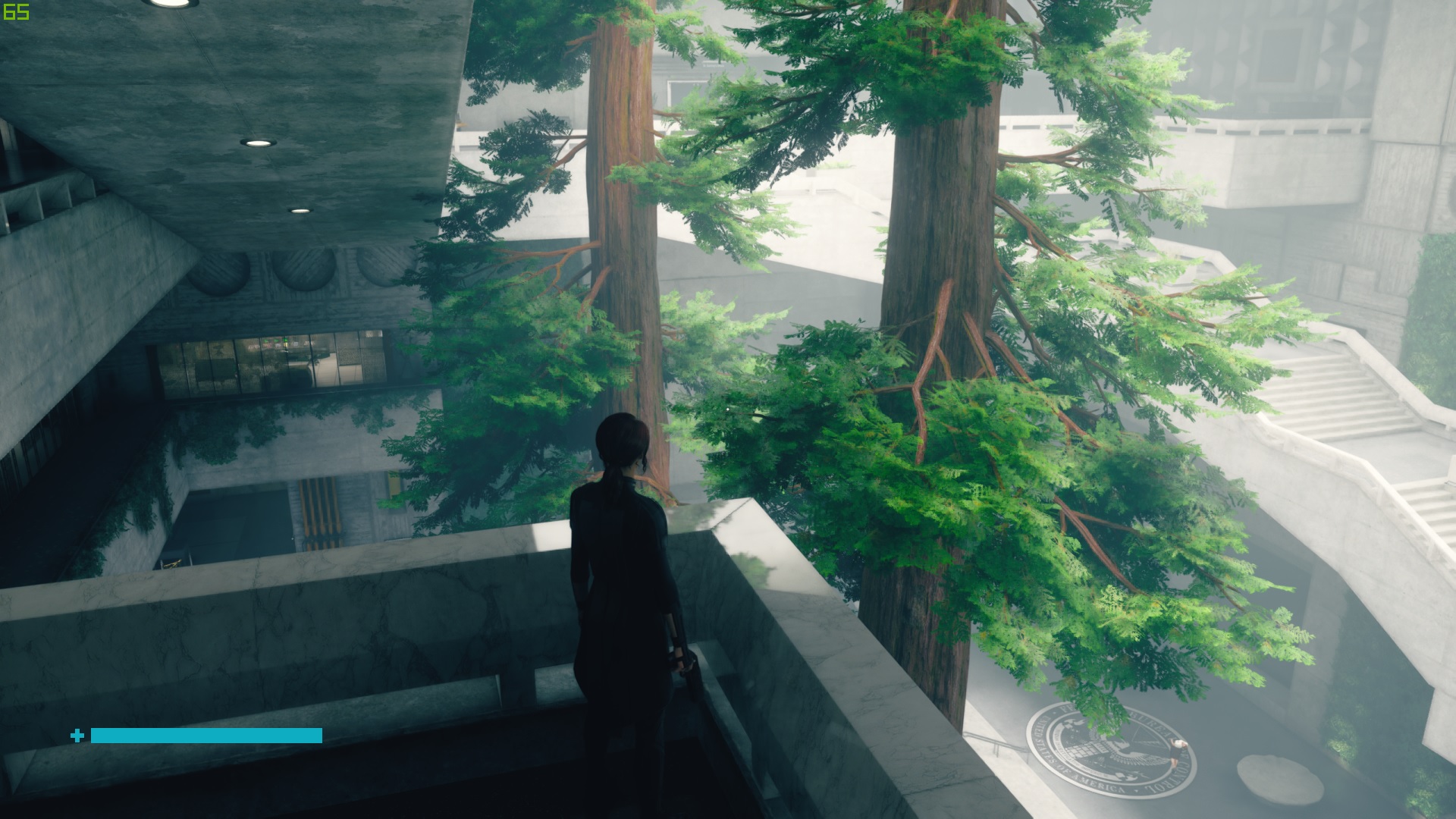 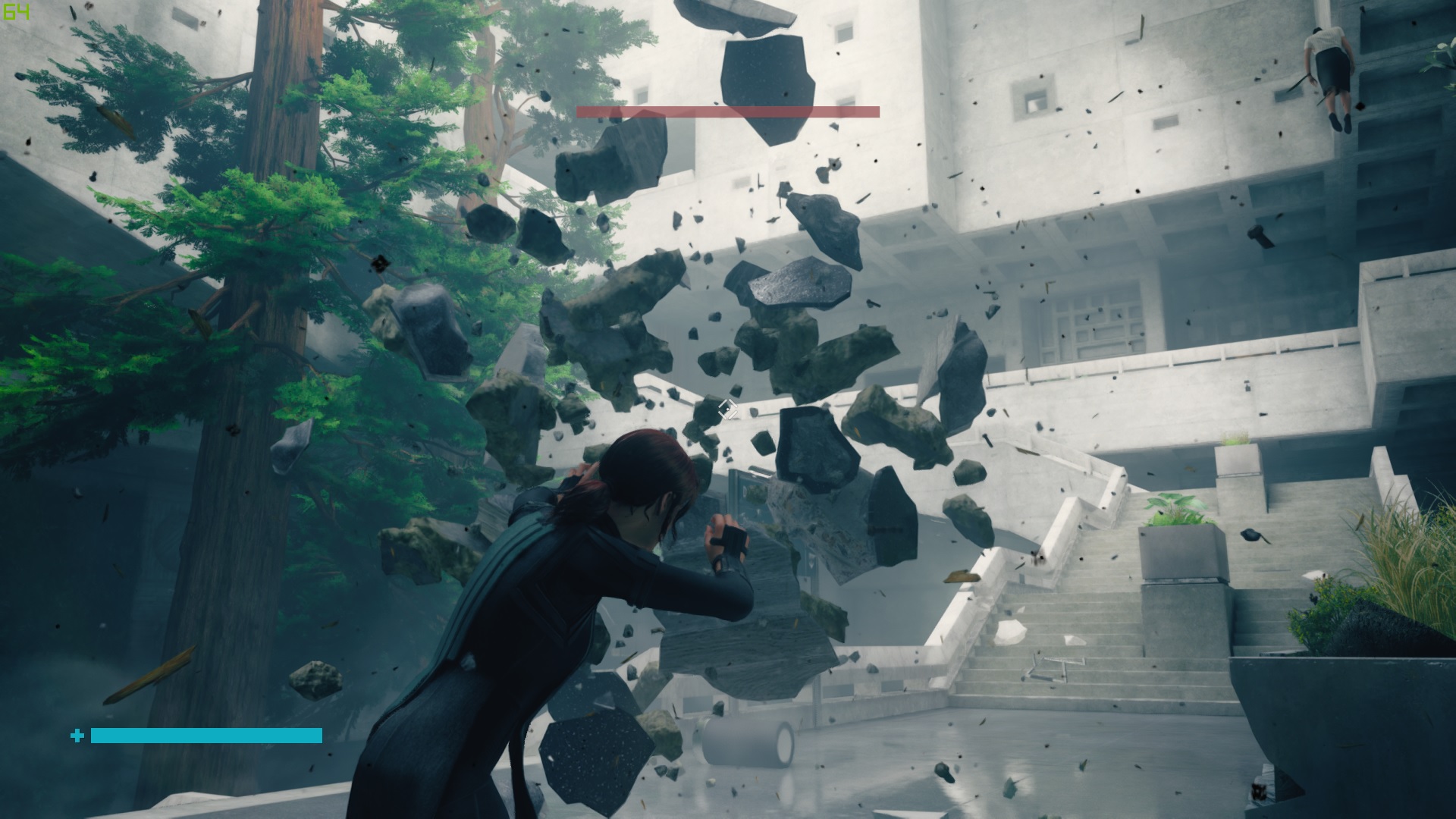 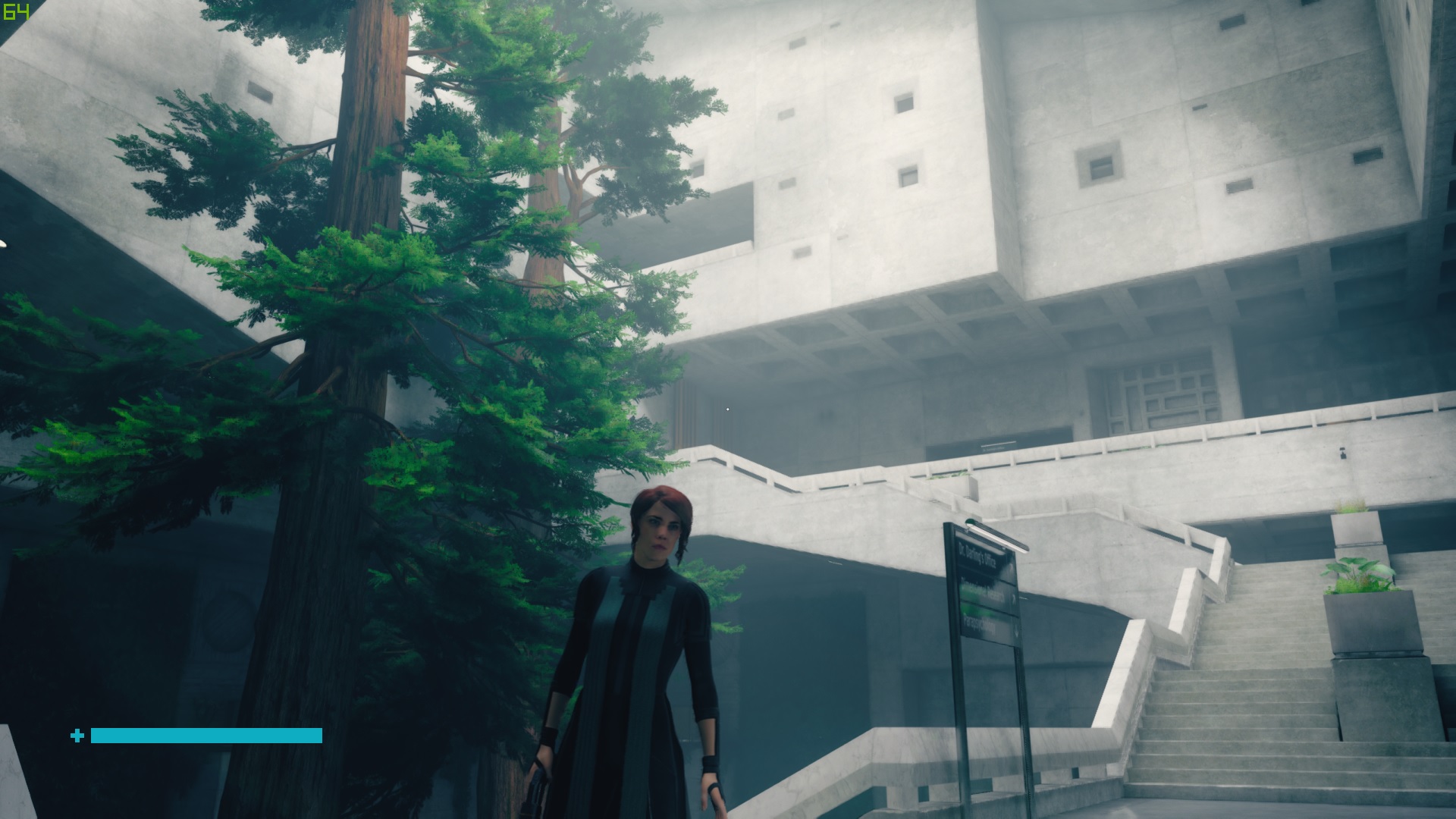 To round off the benchmark testing, we ran CrystalDisk Mark Shizuku Edition to test the NVME contained within the laptop. This yielded a rather favourable result with a great read and write speed as expected from a PCIE 3.0 NVME SSD as seen below. 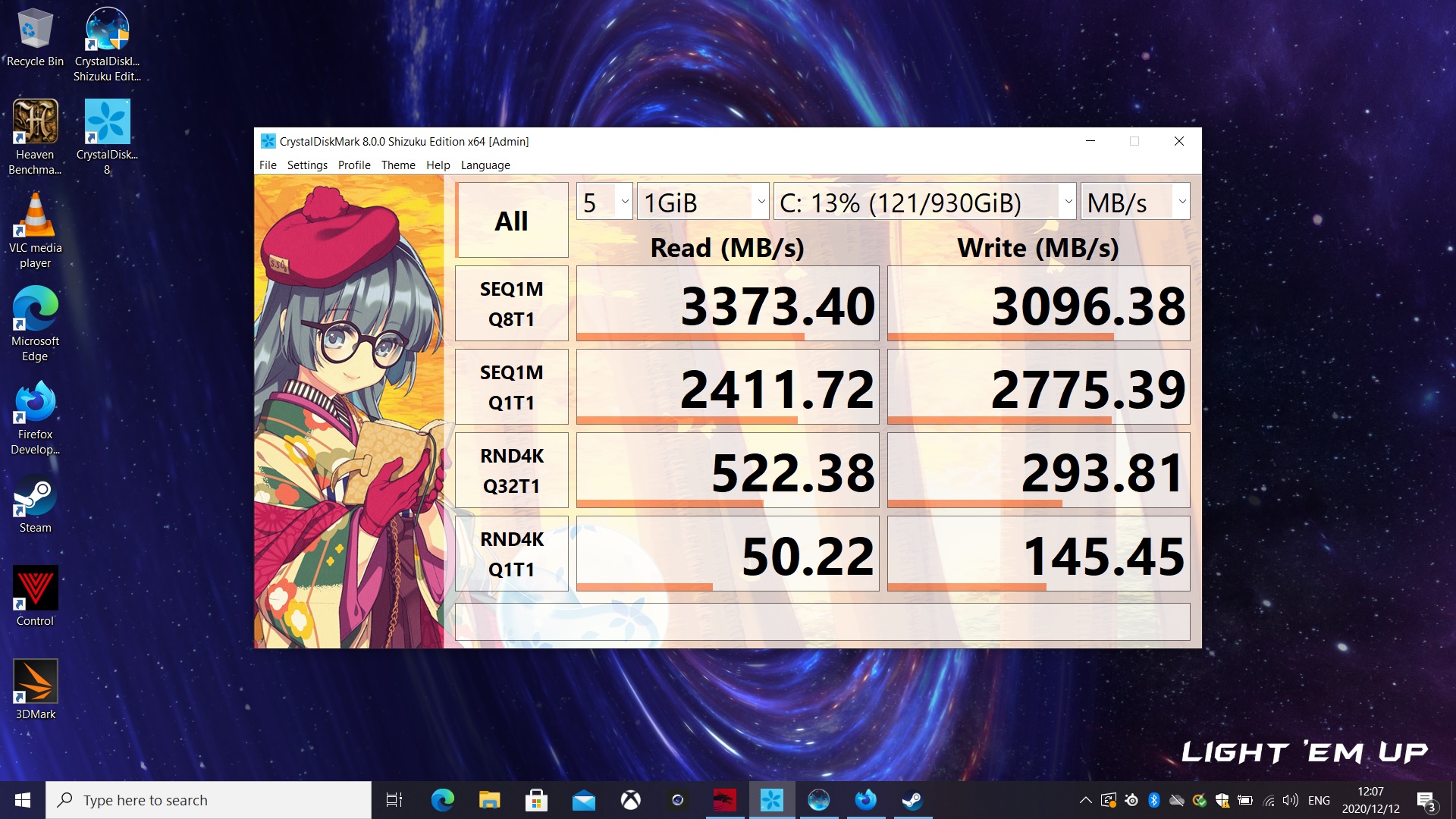 One glaring issue did pop up during our benchmarking and gaming though. The MSi GE66 10SFS runs hot. Uncomfortably hot to be completely honest. The aluminum chassis soaks up the heat towards the back and prolonged gaming sessions are definitely not recommended. The wrist-rest area on the laptop does remain relatively cool enough but as you edge closer towards the screen, the heat levels intensify dramatically. The laptop also ramps up its fans quite often when under load and this does make a fair bit of noise which may be noticeable even through a headset.

If you’re going to use the laptop to game often, we suggest disabling demanding features such as raytracing, MSAA and motion blur so you can enjoy games at a much higher framerate instead. This will also assist in keeping the laptop’s temperature under control and prevent it from becoming uncomfortably hot. Switching off demanding graphics features also means you can make full use of the 240Hz IPS-level display and enjoy a smoother gaming experience throughout.

The battery life on the GE66 10SFS is quite hefty coming in at 5 to 6 hours per full charge depending on what you’re doing and on your brightness settings. The gigantic 99.9 Whr battery charges rather quickly too but if you’re going to be using the laptop for gaming, you’ll have to keep it plugged in at all times. Playing games on battery is not recommended because it will affect your performance and it will drain the battery incredibly fast. 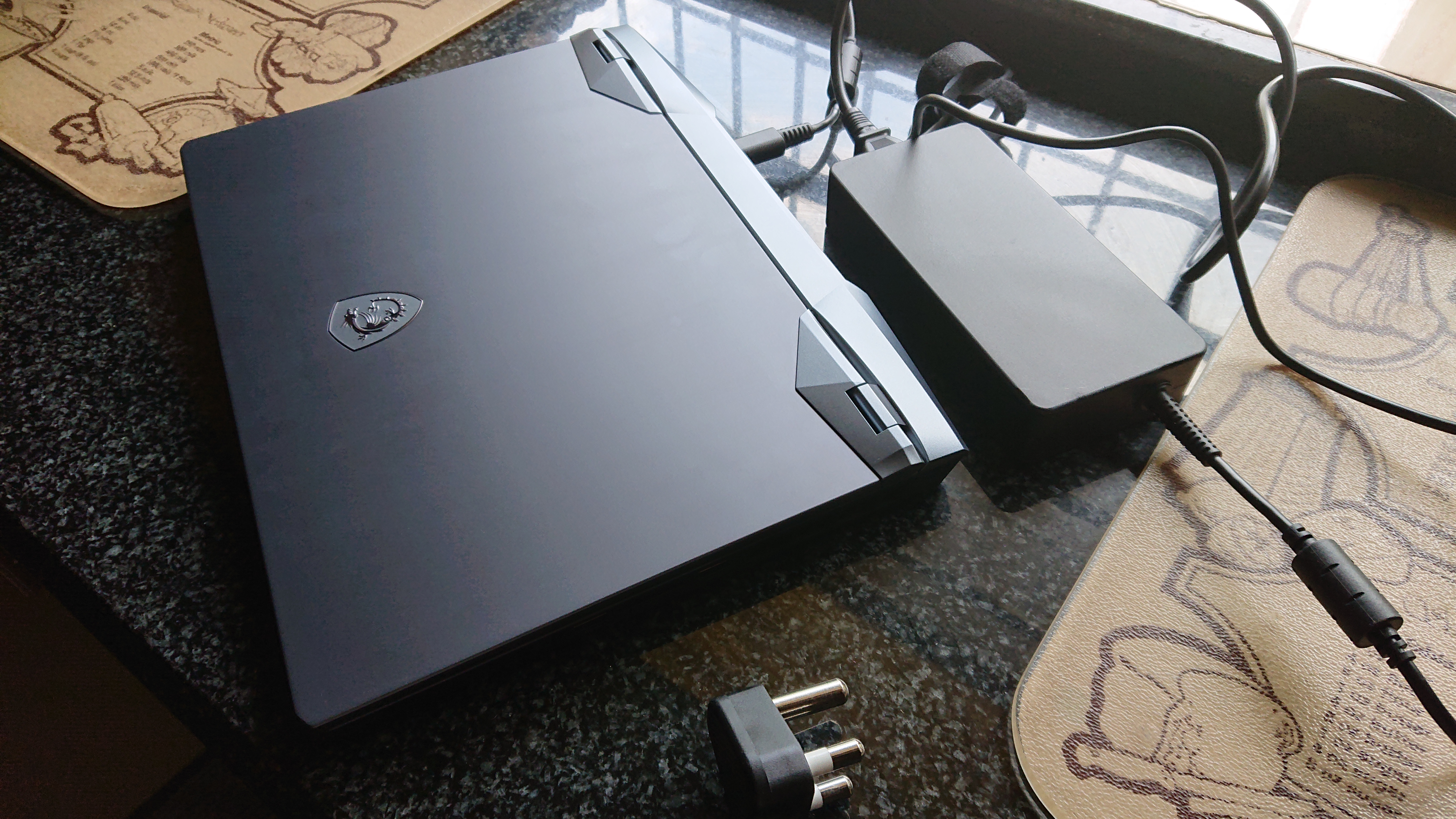 As mentioned above, the fans ramp up when the laptop is under load. This is done automatically thanks to MSi’s Dragon Center and the fans do get quite loud when the laptop is running demanding software. You’ll definitely want to make use of headphones to drown out the whirring sounds when gaming. And you may also want to limit your gaming sessions so as to prevent the laptop from becoming unreasonably hot over time.

MSi have innovated on the GE65 9SF Raider with their GE66 10SFS Raider in a number of ways but have also hurt themselves slightly in the process. The battery size has almost doubled and the GE66 delivers performance that is significantly better than last year’s model. However, the laptop is slightly heavier, runs hot, runs loud and lacks a numpad.

Overall, the MSi GE66 10SFS Raider is a high-performance, high-spec laptop that will easily play every game thrown at it. It will just get hot and loud in the process (much like other gaming laptops). Users should take this fact into account when making a purchasing decision. The GE66 10SFS Raider comes in at around ~R49000 and if you’re looking for a portable desktop replacement, this is certainly a great choice.
9