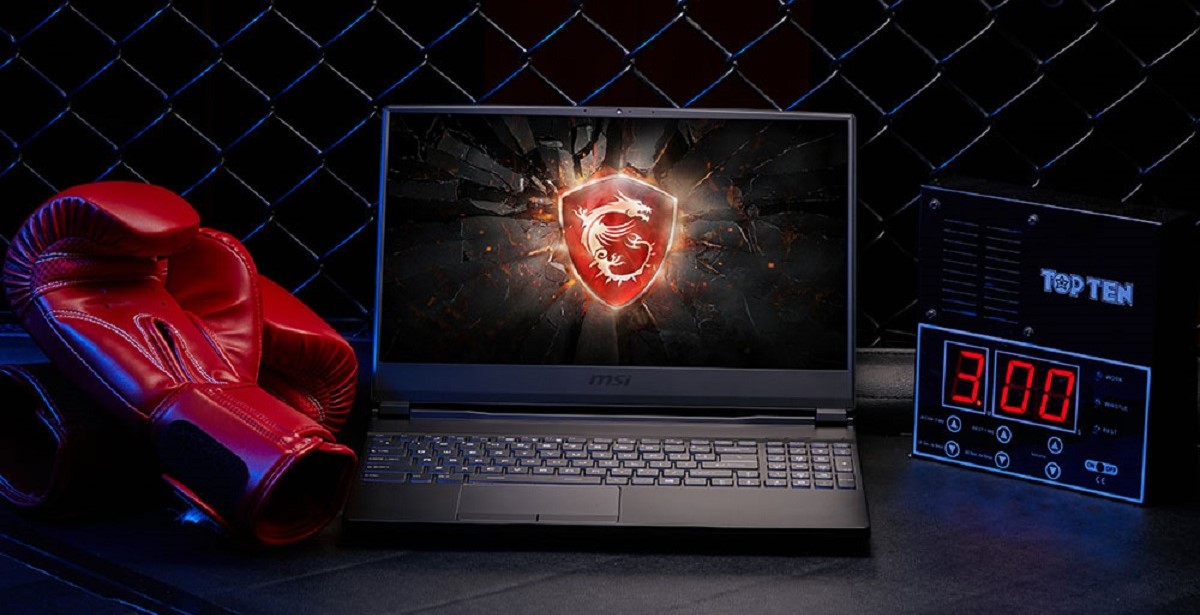 The MSi GE65 9SF Raider is a powerhouse. Don’t let the rather subdued looks fool you, this laptop is an absolute gaming beast. It handled everything we threw it at over the past two weeks and we’re extremely impressed by it. As with most high-end gaming laptops recently, the GE65 features Intel’s 9th generation i7 9750h. The raw processing power is a slight step up over the previous generation i7 8750h but one that’s completely welcome in a gaming device. The GE65’s 32gb of DDR4-2666 ram paired with an Nvidia RTX 2070 with 8GB GDDR6 round off the package. What gamers have here is an incredibly high spec laptop in a lightweight chassis that doesn’t skimp on performance at all.

The laptop’s official hardware specs are listed below: 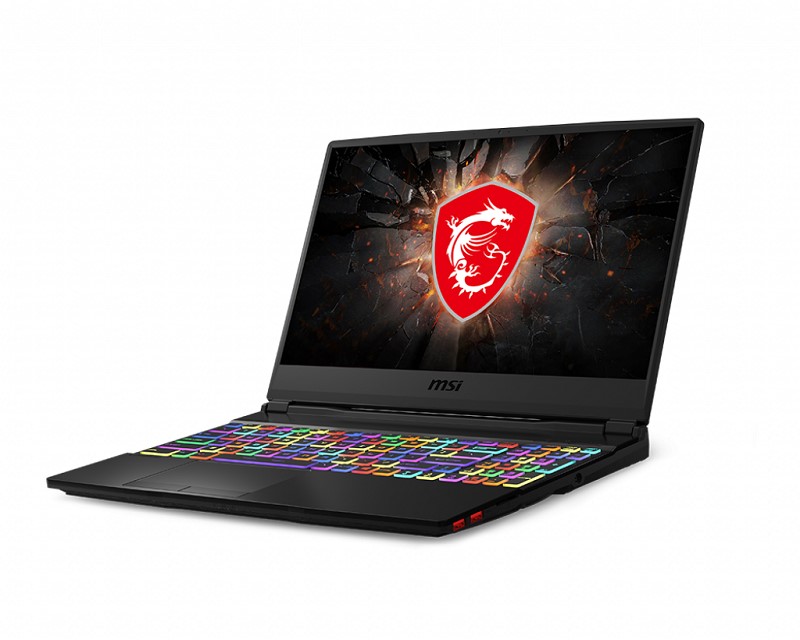 The MSi GE65 9SF’s design is, as previously mentioned, rather subdued for a high-end gaming laptop. While tastes may vary between users, we personally love the fact that the laptop doesn’t scream "gaming" at the top of its lungs. This is a laptop you could easily take to work or university and people won’t really start questioning you about it. This is, of course, assuming that you have the RGB per-key backlighting and USB port lighting disabled.

The bottom of the laptop looks great with air vents cut out in a mosaic pattern. There are also rubberized feet located at the bottom, which is a major plus point if you’re going to be using the laptop daily. The rubberized feet help to prevent scuff marks from appearing on the actual laptop casing when placing it on a surface, and these feet lift the laptop up ever so slightly so that there’s adequate airflow from underneath the machine.

The MSi GE65 9SF features a 15.6" Full HD (1920x1080), 240Hz, IPS-level gaming display with thin bezels which allows for more screen real estate in a smaller form factor. Gamers will absolutely love the fact that the screen is 240hz as this allows for a far smoother gaming experience.

Right in the middle of the laptop is the SteelSeries keyboard with per-key RGB backlighting. There’s a Numpad included too, making it inclusive for both gaming and work productivity. The RGB backlighting is quite bright but can be dimmed and switched off to conserve battery life, or to suit preference. In the two weeks of testing the laptop, typing was an absolute pleasure with the SteelSeries keyboard feeling just right. The power button is located away from the keyboard towards the back right-hand side corner and as with other MSi laptops, has a minuscule power indicator LED located right next to it. 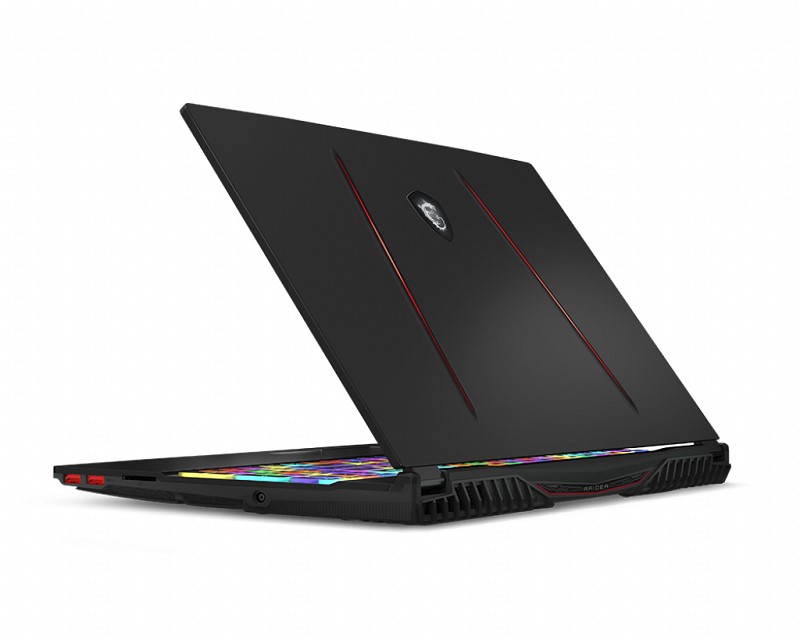 The touchpad is the right size for the laptop’s chassis, has two clickable buttons, and is located directly underneath the spacebar. This is the perfect spot for it and using the touchpad was never painful, awkward, or annoying. The aluminum used in the chassis is prone to fingerprint marks but these can easily be wiped away.

The laptop weighs in at just 2.27kg and it’s definitely light enough to slip into a bag and bring to work or university daily without causing back pain. The laptop is slightly chunky, though, coming in at 26.9mm high when compared to some thin and light competitors out there including MSi’s own GS Stealth range of laptops. The HDMI, Mini-DisplayPort, USB Type C port, and SD card reader are, however, greatly appreciated even if they add to the thickness somewhat.

The MSi GE65 9SF Raider definitely lives up to its name and is RAID ready. The laptop is aimed at the enthusiast gamer market and since there is a 9th Generation i7-9750h processor and RTX 2070 inside, there really isn’t much out there that will bring it to its knees. 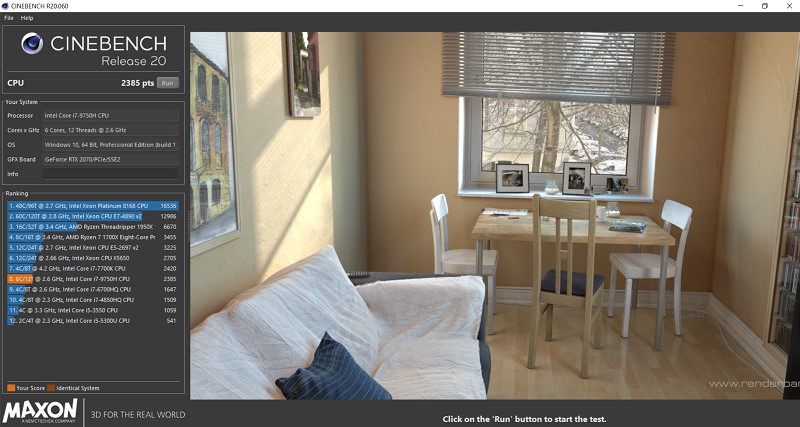 We ran a series of benchmark tests and the Raider performed quite well across the board. In Cinebench R20, the Raider yielded an impressive score of 2385 when plugged in and 1521 on battery power (with power settings set to balanced). We also ran the same Cinebench R20 test with the Coolerboost fan enabled and this yielded an even higher score of 2413 when plugged in.

We decided to change things up a bit on the gaming front and ran the Sid Meier’s Civilization VI base game graphics benchmark, as well as its expansion Gathering Storm’s Graphics and AI Turn Benchmarks. These benchmarks yielded rather favourable results too. These tests were run while the laptop was on battery power and not plugged in so as to give a real-world example of gaming on the go. 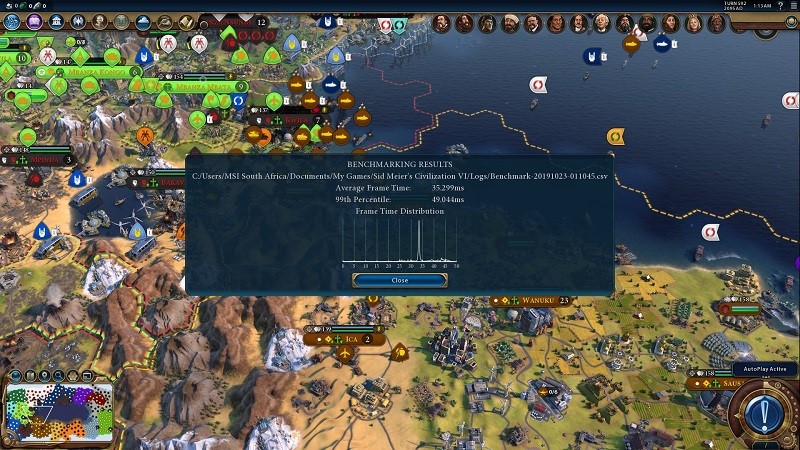 Furthermore, while the Raider can run the game perfectly fine with everything maxed out, we would recommend turning down the MSAA setting from 8x and opting for less reflective passes to yield much better performance.

Additionally, we ran the Unigine 2 Superposition Benchmark on Extreme, High, and Medium settings with Nvidia’s latest drivers (October 2019) and got 1631, 2893, and 3914 respectively. The cooling on the laptop kept the GPU temperature below 60 degrees during these tests. The Superposition 2 benchmark does yield some variable results based on numerous factors though, so we’ll leave their interpretation up to your discretion.

In the two weeks that we had the laptop, we played games such as PlayerUnknown’s Battlegrounds, Counter Strike: Global Offensive and Destiny 2. All of these ran at well above 100 FPS on the highest graphics settings available, and not a single hitch or problem regarding performance was encountered. CS: GO, in particular, ran between 180-200 FPS so competitive gamers will love that fact coupled with the 240hz refresh rate on the monitor. 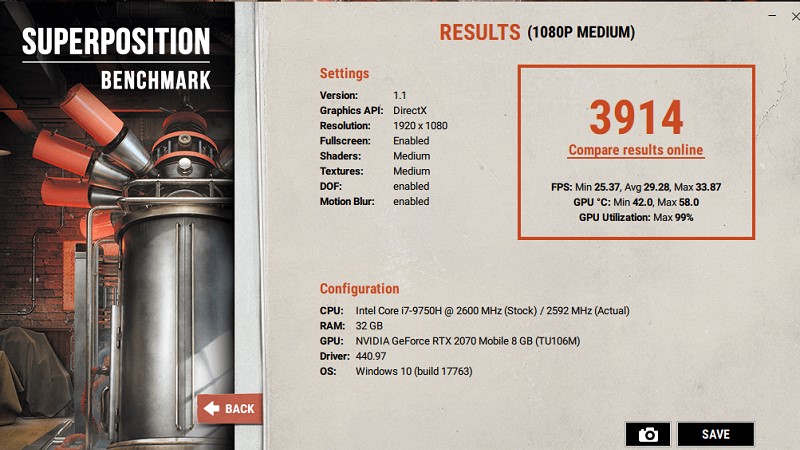 Lastly, we played Control with all graphics settings maxed out as well as all Ray Tracing options maxed out. The game was playable at around 27 FPS but as soon as there was a lot of movement on-screen, or some flashy effects kicked in, the frame rate dropped down to around to an abysmal 7 to 12 frames per second. This is to be expected though since Control is such a graphically demanding game. If you want to play Control on a GE 65 9SF Raider, don’t waste your battery life or time with Ray Tracing enabled. Just run it on high with Ray Tracing disabled and save yourself the pain of watching your framerate drop.

The Raider’s battery life clocked in at around 4 to 5 hours per full charge with gaming significantly affecting the charge levels. The battery will drain a lot faster if you’re playing a highly graphically demanding game. Ideally, you would want to only play games while the laptop is plugged into a power source if possible. The Coolerboost fans will automatically kick in to control the CPU and GPU temperature levels should they get too high but users can opt to use MSi’s Dragon Center to control their fan speeds if they want to. The fans do sound really loud though when they are spinning at 6000 RPM so be sure not to use the Coolerboost feature, if you’re in a meeting or in an environment that requires peace and quiet. 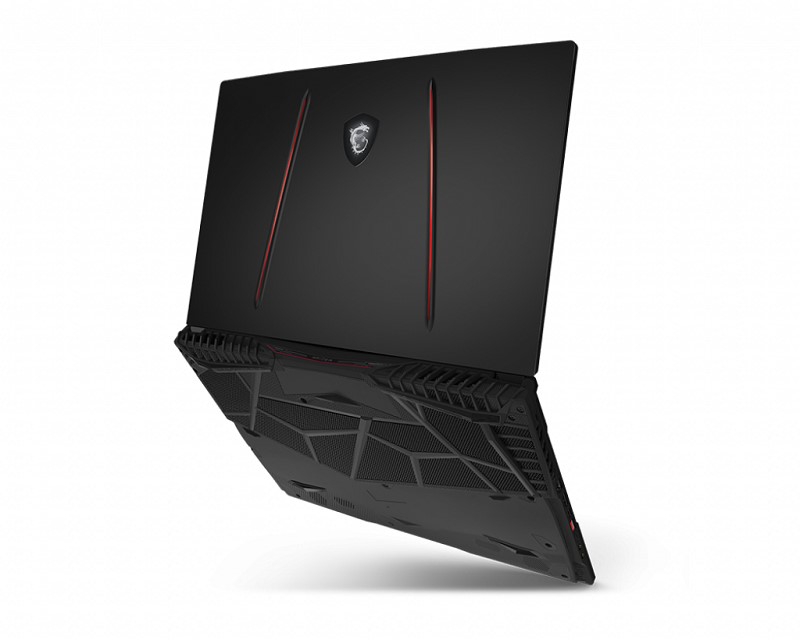 Overall, the MSi GE65 9SF Raider is an extremely powerful enthusiast laptop. It has a powerful processor, a massive amount of RAM, an RTX GPU, and a large 500gb NVME drive plus 1TB of HDD storage to boot. It can handle all modern-day games and runs them extremely well, with the exception of Control with Ray Tracing set to high.

The only major negative aspects applicable to the laptop is the battery life (as is the usual story with gaming laptops) and its extremely high recommended retail price (~R40,000). The Raider is, therefore, a pricey, powerful package that doesn’t pull any punches. If you’re in the market for a gaming laptop and money isn’t an issue, this is definitely a laptop to consider.
9.5

Exceptionally good performance across the board

Fans can be rather loud at 6000RPM

Subdued looks (If you wanted something flashier for example)