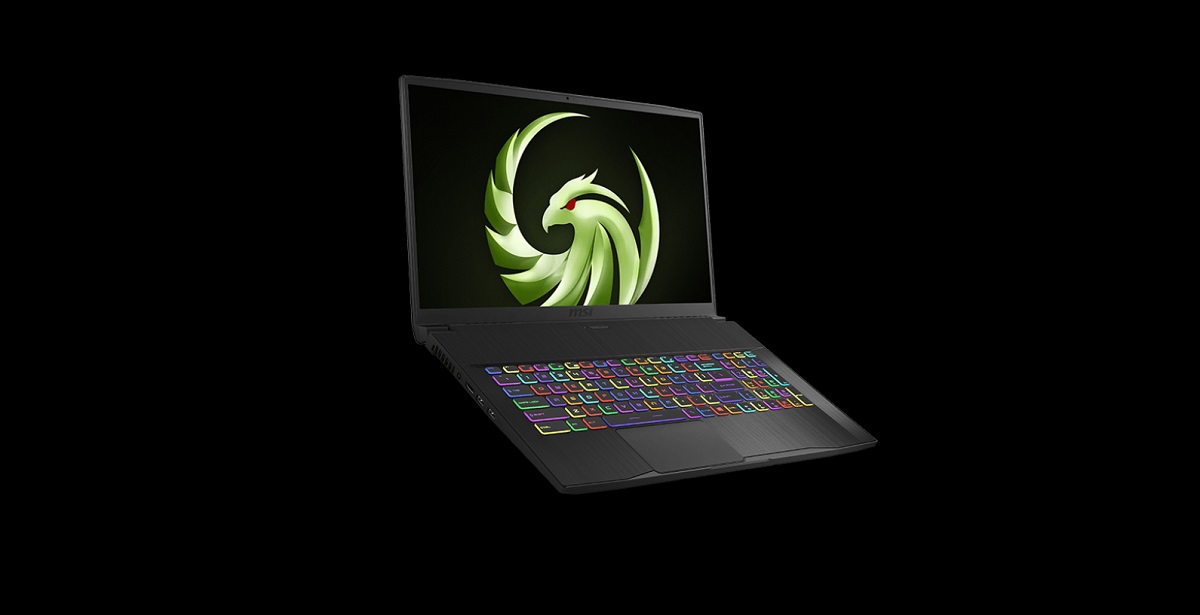 Gaming laptops are becoming ubiquitous - walk into any coffee shop, if you dare, and if the people working there aren’t banging away on one of Apple’s products, they will invariably have a thin and light gaming laptop. The reason is simple: gaming hardware is used by video and photo editors, but many more people are comfortable with showing the world that they are gamers and are able to buy gaming laptops for professional and personal enjoyment.

MSI’s Bravo 17 fits neatly into that category, a gaming laptop that is equally at home at a LAN party and in an office.

Gamer in a Businessman’s Suit 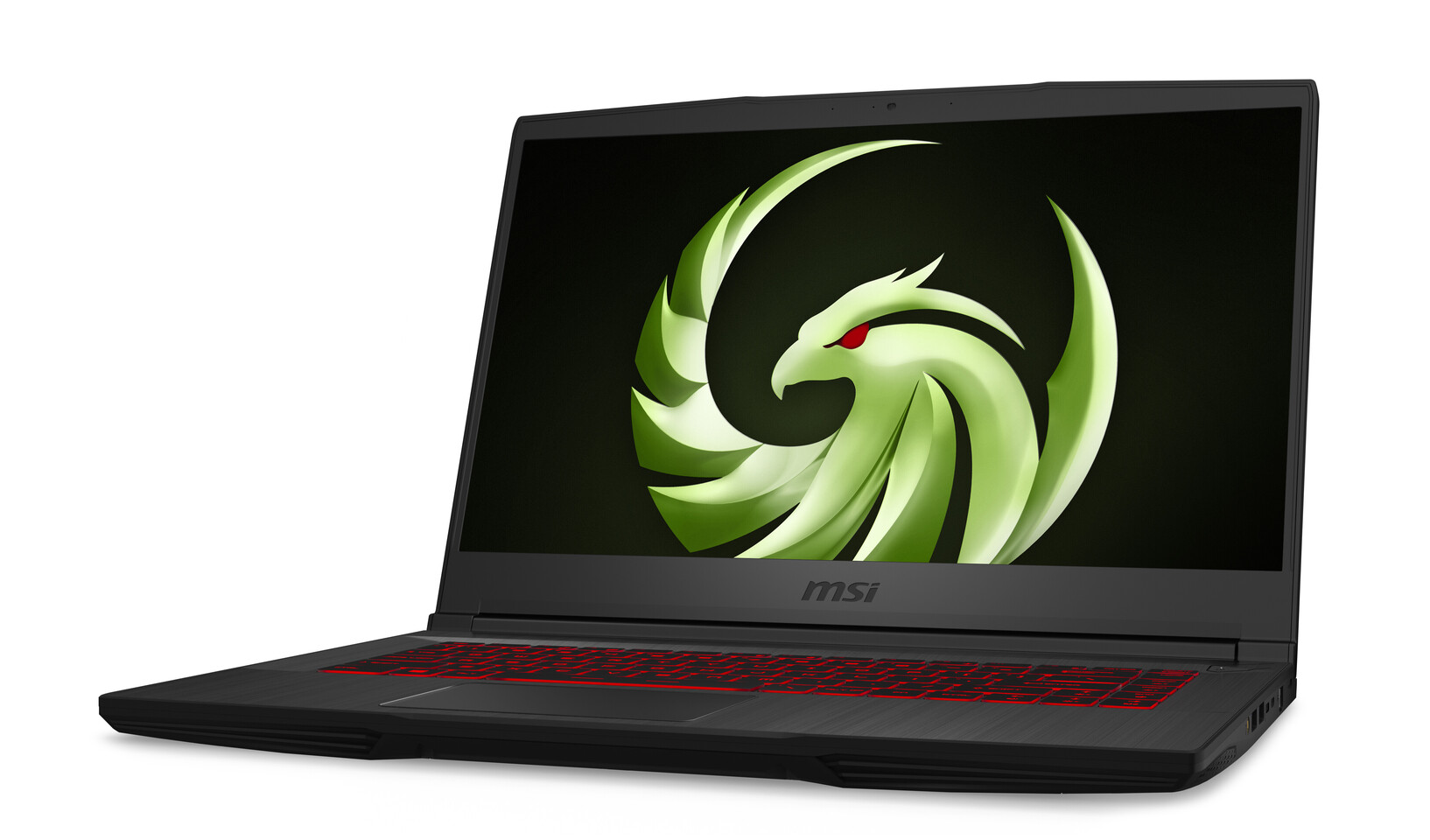 Aesthetically, the chassis of the Bravo 17 is muted. The brushed aluminium chassis is accented by MSI’s rather large but not disproportionate phoenix/eagle logo in a chrome finish. This is no different than the thousands of Dells that litter the boardrooms and cubicles of corporate SA with their chrome Dell logo on the lid.

The build quality is excellent with the chassis when closed exhibited no flex at all. Opening the lid, one handed, you are greeted with the first and only in-your-face testament to the gaming pedigree of the Bravo 17 – a Keyboard littered with dark red (MSI red?) accents. I do not care for this aesthetic; it’s a bit too loud and aggressive, but it does shout out “When I’m not gaming, I’m creating amazing Powerpoint presentations!”

In terms of deck flex, I was pleasantly surprised that what flex there was required you to press quite hard on the chassis.

The keyboard itself is a nice chiclet style full-key keyboard that is pleasant to type on and the keys have a not-too-short and a not-too-long travel, it is just right. Using this laptop for a week responding to mails and typing a few documents here and there was a pleasure. In terms of deck flex, I was pleasantly surprised that what flex there was required you to press quite hard on the chassis. Also well done to the engineers as pressing on the deck near the track pad did not activate the left and right click.

The keyboard layout is an almost standard US layout, but there are some oddities. For instance, we are all used to having the Windows key on the left on a laptop, but on the Bravo 17 it is on the right of the spacebar with function on the left. So, whenever I wanted to control screen brightness or control, I kept hitting the Windows key and when I wanted to use the Win Key shortcuts, I was pressing function. It was very frustrating. Also, the function keys are split between the F keys and the arrow keys, with screen brightness controlled by the arrow keys. Honestly, it took me far too long to realise where the keys were. Having said that, no one manufacturer assigns keys in the same order as another; I wish manufacturers would sit down and standardise this stuff so we would all know that no matter the machine, Fn+F1 would be the Sleep function.

On the gaming side the keyboard is disappointing in that the keys are backlit, but sadly to come in at that budget price we do not have full RGB lighting. The keys are all a uniform red, despite what the picture in the thumbnail and on the MSI website indicates, when lit up and as much as I hate RGB, on a keyboard individual RGB lighting is useful for highlighting specific keys by their function such as WASD all in red and the number keys in green and unmapped keys unlit. Even in productivity my keyboards look like a Christmas tree when I am using Excel or Word as I map certain shortcuts and functions to key combos and macros.

Sadly the Type C port isn’t a Thunderbolt 3 port which would’ve been a nice addition for offices and home to plug into monitors and other peripherals and also allow for charging, but that is understandable given the budget nature of the laptop. 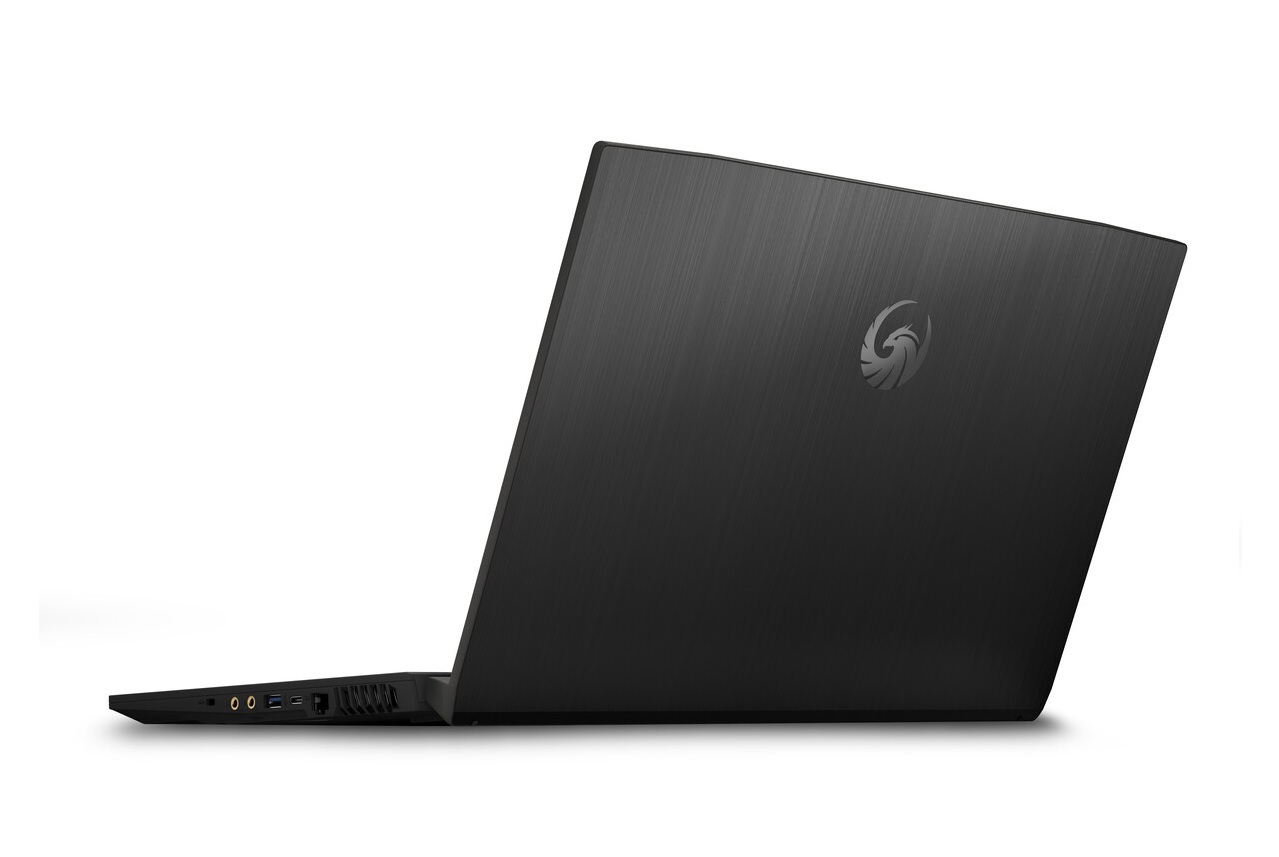 Everything on that list, especially the CPU based on AMD’s market leading 7nm production process, screams premium. Everything that is, except the RX5500M. Now don’t get me wrong, the RX5500M is a decent budget GPU but pairing it with such a powerful CPU is a mistake and especially at the current retail price of this machine. First off, the CPU is class leading, 8 cores and 16 threads with a base clock of 2.9GHz and a Boost Clock up to 4.2GHz. The specified TDP of 45W makes it a frugal sipper of power and the 7nm process means that heat output is consequently reduced. Also, the max temp of 105 degrees Celsius allows the machine to get nice and toasty before there is any problems with thermal throttling. Like I said, the CPU is class leading and AMD really is pummelling Intel from all sides these days. However, do not be fooled by the name. This is not a 4th gen Ryzen Zen 4 processor as the “4000” moniker would imply. This is in fact a 3000 (Zen 3) series chip with an updated Vega APU. Why the confusing name? Who knows, maybe AMD decided that they had to beat Intel on the “confuse the consumer” front too?

This CPU means that when it comes to pure productivity the laptop is an absolute beast; it will slice through large Excel spreadsheets like a hot knife through butter and any other CPU intensive tasks will fall by the wayside. My first synthetic Cinebench R15 test proves this with a score of 1 848 putting it miles ahead of some admittedly older Intel competition. 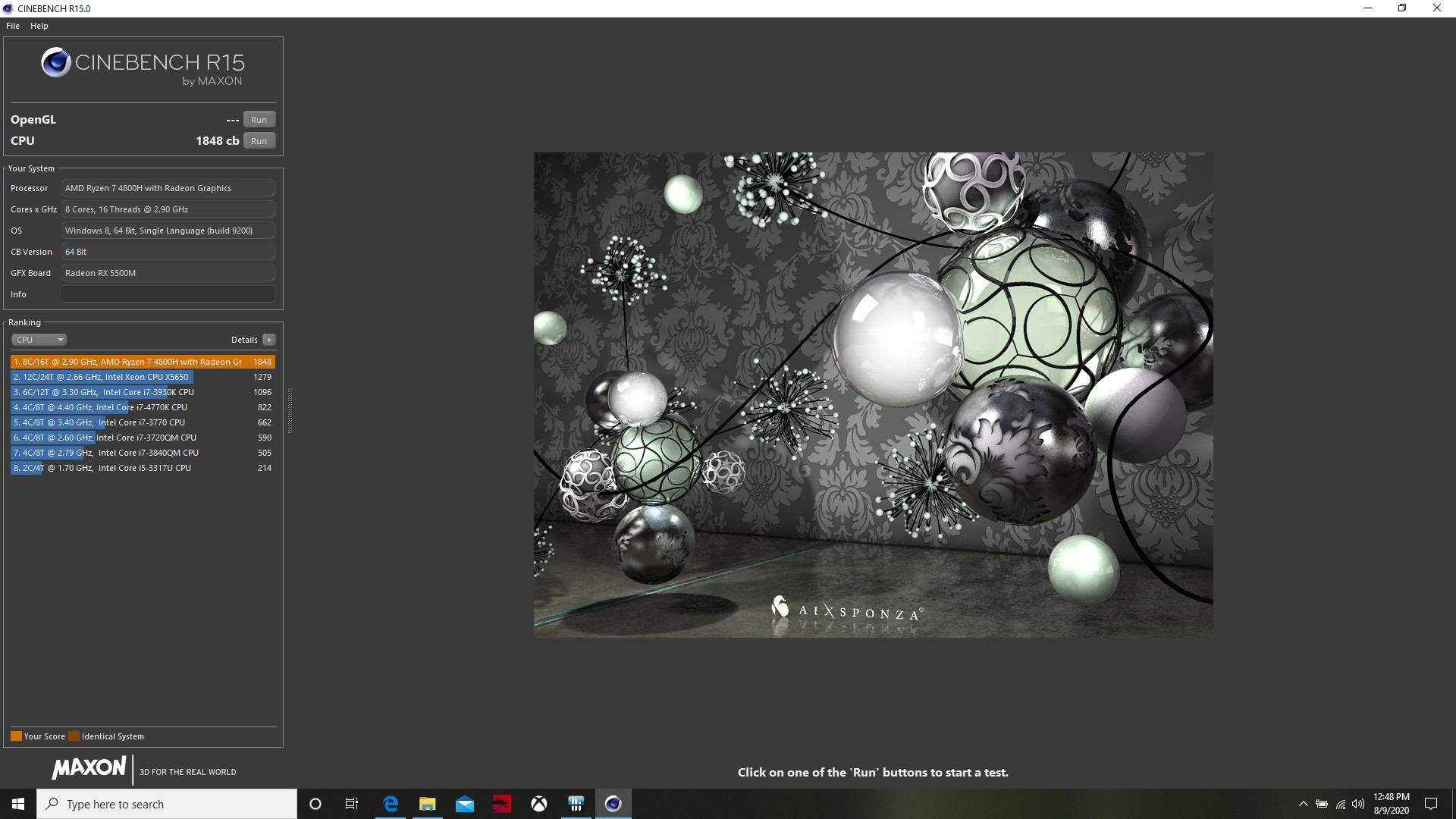 What does hold this system back though is the GPU. My first run of the Timespy synthetic test gave me a GPU score of 4 358 and an average FPS of about 25. For comparison I ran the same test on my own laptop (a Core i7-7700HQ and GTX1070) that is about two and a half years old. My GPU scored 5 738 with an average FPS of about 35. The comparative CPU scores were the opposite with the Ryzen putting the smackdown on the i7 with a score of 8 915 vs 3 961. This shows that the RX5500M is a definite bottleneck on this system and maybe going with a more budget friendly Ryzen chip would have been appropriate to keep to the all-AMD build aesthetic. 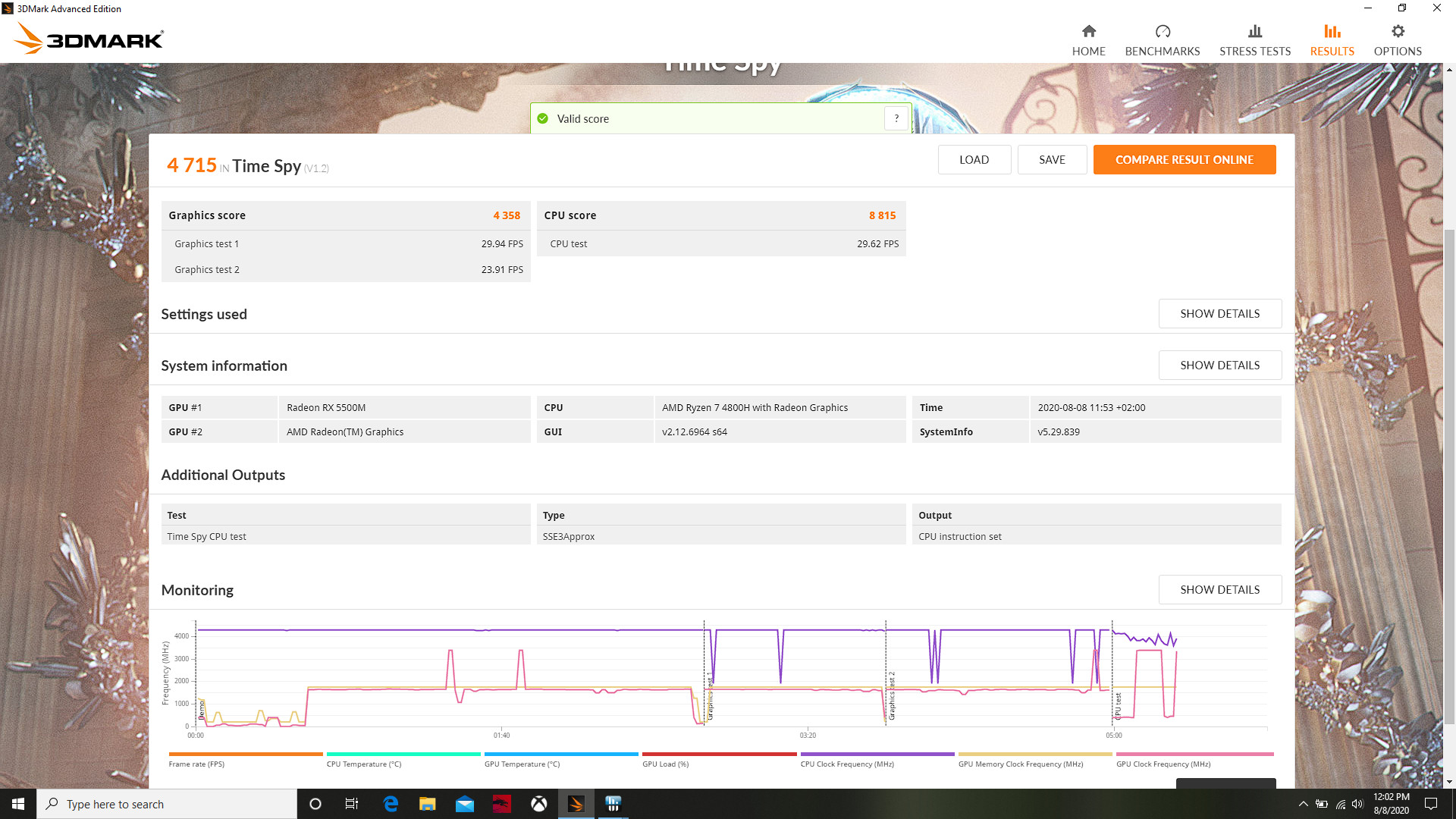 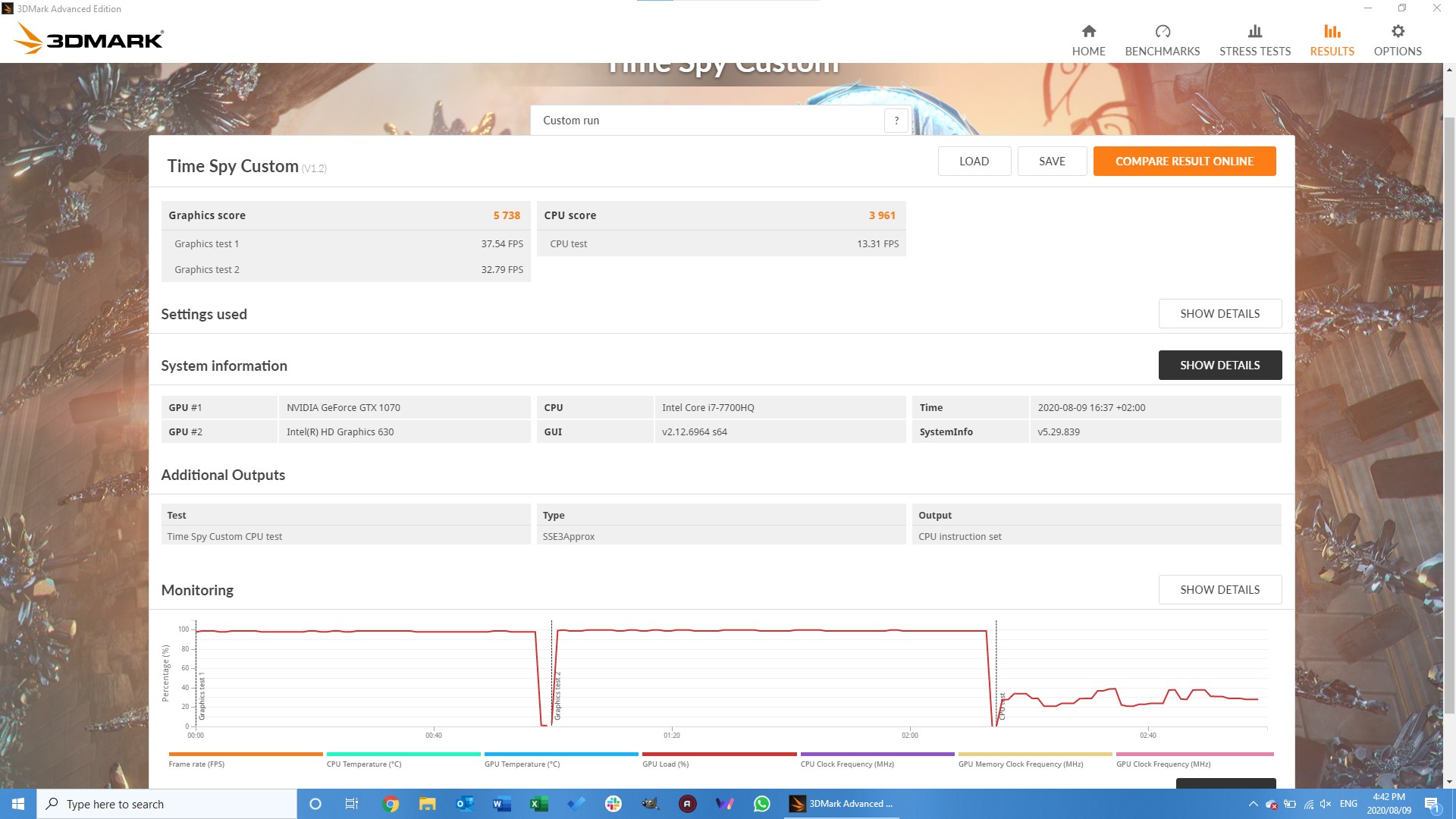 Having said all that, what is the actual in-game performance like? For this I ran a couple of games to stress the CPU and GPU. First off was a more CPU intensive task – Totalwar: Warhammer 2 - with a custom battle running of thousands of units. That CPU shines in this game, allowing the steady 45-50FPS framerate in a game that does not need it. Even when zoomed the frame rate was steady. 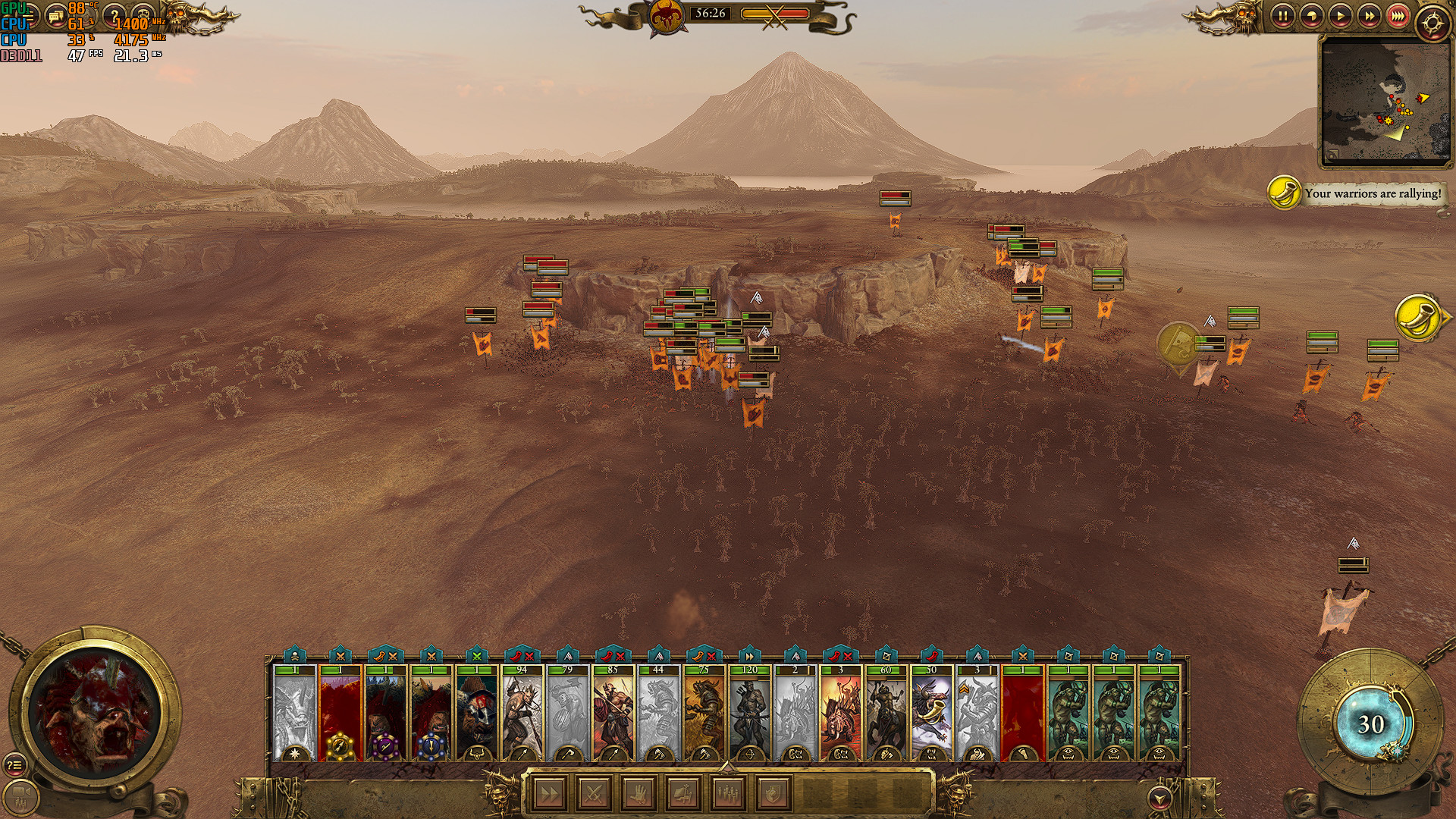 My next test was going to be Doom (2016), however, even though it is built with Vulkan in mind and should run better on a Radeon, the game would not launch. I tried all the tips and tricks and even tested it on two other nVidia and Intel machines, but the Bravo 17 just did not seem to want to allow me to murder demons. I switched to my next favourite, an older title, but still one to test framerate as it is a twitch shooter – Shadow Warrior 2. On this title the system managed an admirable 60-70FPS and a smooth framerate at that. Brilliant, and I think this is where the laptop is aimed – less demanding titles at 60FPS and AAA downgraded to maximise FPS. If you are a CS:GO or Fortnite/Apex Legends player, the Bravo 17 will run those games at high framerates no problem. Stress it with more demanding titles and you will have to favour performance graphical settings to maintain high frame rates. Just look at the Horizon Zero Dawn benchmark that suggested a “Favour Performance” setting while my older laptop got a “Favour Quality” setting suggestion. 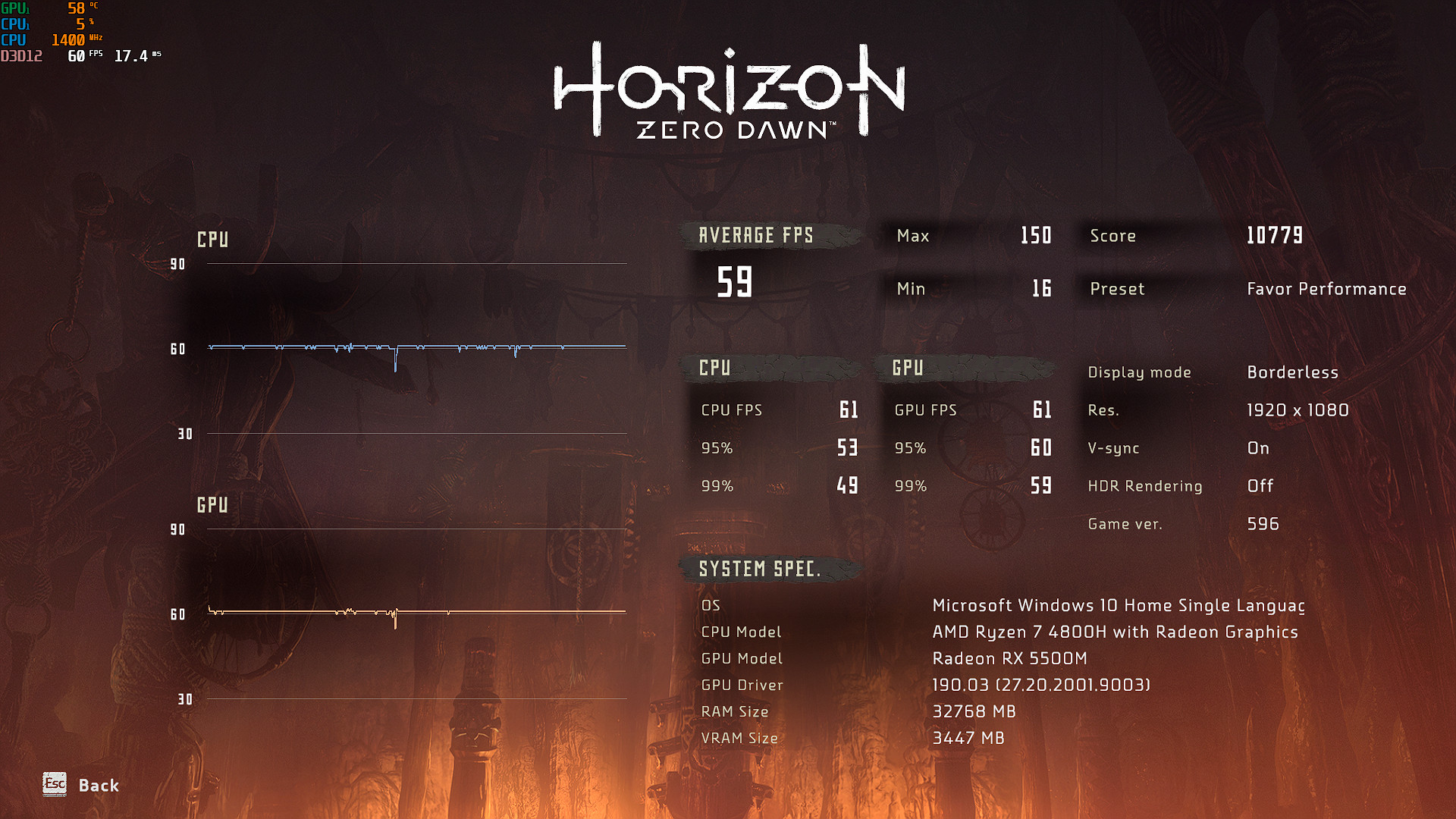 Coupled with that ability to max out framerates in games that require it, the laptop is equipped with a Freesync panel enables 120Hz panel. This ensures the smoothest gameplay experience possible and again, higher frames equals faster reaction times so preventing tearing, stuttering, and ghosting is a must to fully take advantage. In addition, as an IPS panel the colour reproduction is gorgeous, giving the Bravo 17 an edge for both games and photo and video editing.

If you are a CS:GO or Fortnite/Apex Legends player, the Bravo 17 will run those games at high framerates no problem.

A concern is the temperature control and thermals. Running Heaven, an older DX11 stress test, raised a slight concern that under load the Bravo 17 will get close to thermal throttling. I ran the benchmark for thirty minutes to ensure that it got up to temperature and the GPU plateaued at about 89 degrees Celsius with occasional spikes to 90. The CPU fared better with a plateau of around 76 degrees, well below the 105 maximum, with an occasional spike to around 78. As I said the concern is slight as the system did not quite hit thermal throttle limits, but your experience may vary depending on ambient temperatures and your use case.

The advertised battery life is between 7 and 10 hours use, and this laptop certainly lived up to that with me both gaming for an extended time on battery, reduced settings of course, and working on emails and other mundane tasks. The speakers included are good, nice bass and mids, but in general I think you will be gaming using headphones. The webcam is a decent HD webcam, important these days for Zoom meetings, but sadly does not support Windows Hello.

Your Budget Must Be This Big

The MSI Bravo 17 is a mixed bag of premium features and one difficult to reconcile component. The specs certainly fit the “budget” moniker, but the local pricing of just under R30 000 puts it squarely in the mid-range to premium category. Sadly, competitor laptops but with the better performing GTX2060s can be found for between R22 000 and R27 000, making them the obvious pick.

At this price it is difficult to recommend this laptop if you are after pure gaming performance. For productivity (image manipulation, video editing Excel) and some gaming then this is the laptop for you in a thin and light form factor with a powerful CPU.
7.5

Some of the thinnest screen bezels I have ever seen