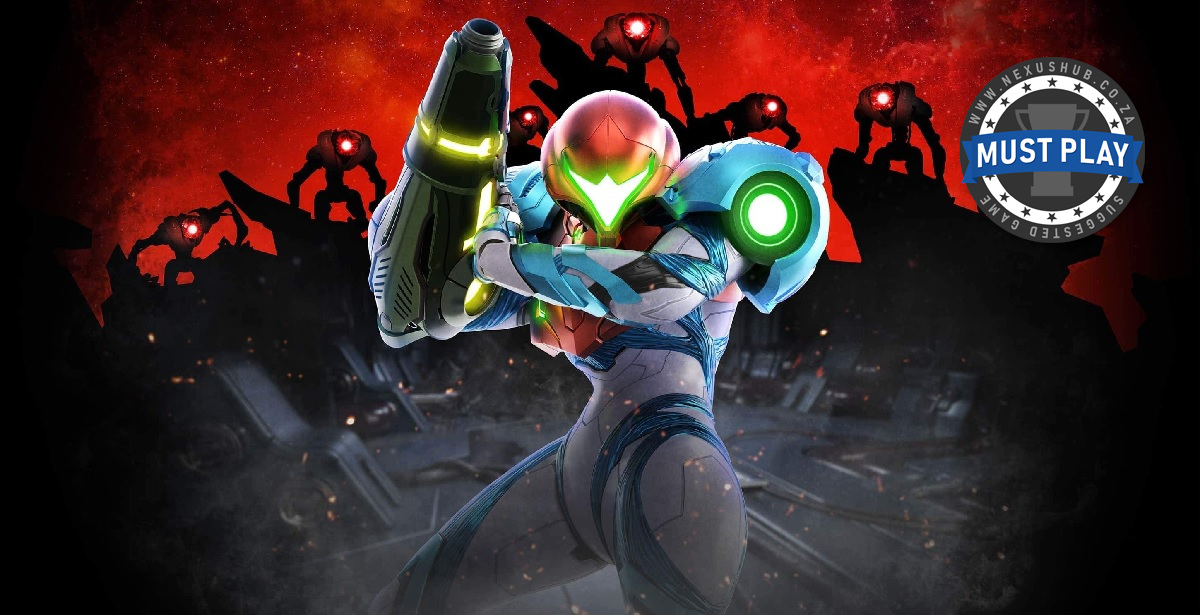 The Metroid franchise has been laying low for a couple of years now with Metroid: Samus Returns being the last game to be released on Nintendo 3DS all the way back in 2017. This wasn’t exactly a major entry either since it was primarily a modernised remake of Metroid II: Return of Samus. Now, finally, in 2021 we have a brand new mainline Metroid series title in the form of Metroid Dread. 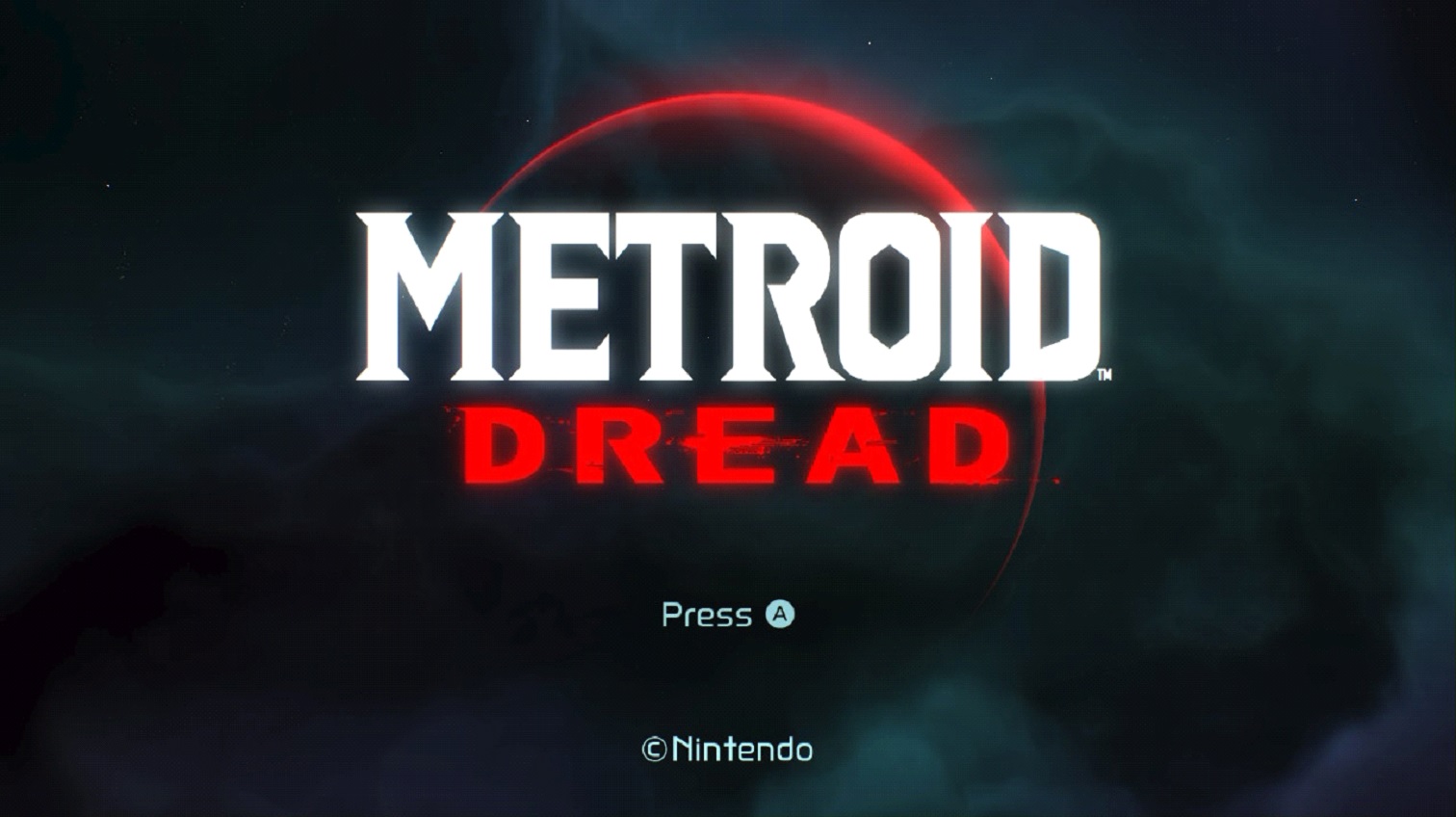 Set directly after the events of one of the best Gameboy Advance titles hands down (Don’t even @ me about this, it is!), Metroid Fusion, Metroid Dread seeks to bring the franchise to even greater heights. Does it ultimately succeed at this?

Players will once again take on the role of Samus Aran in Metroid Dread. They’ll be treated to a mini story recap right at the start of the game and this gets you up to speed with the events of the previous titles. This recap just scratches the surface of the story told so far over the past few decades but it does a good enough job of onboarding newcomers into the game. Samus receives a mysterious transmission which includes video of an X-parasite floating around on an unknown planet. The transmission was traced back to planet ZDR and the Galactic Federation dispatched a group of seven E.M.M.I robots to the planet to investigate. Unfortunately, all contact with the E.M.M.I robots were lost. Samus then decides that since she’s immune to the X-parasite’s deadly effects, she’ll adventure forth and investigate what’s happening on ZDR. 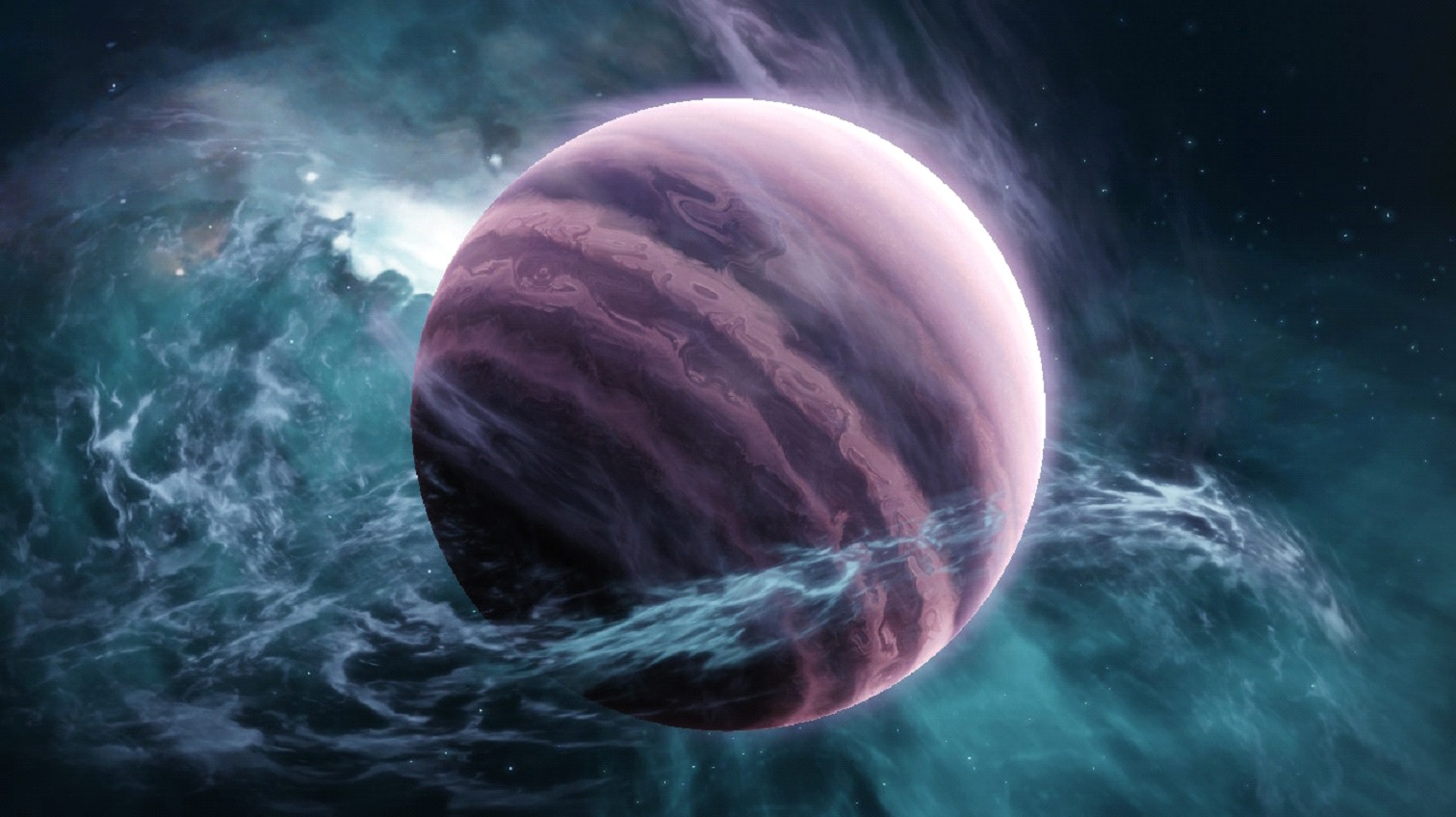 Unfortunately for Samus, things are never as easy as they seem and upon landing she gets attacked by an unknown Chozo warrior. Samus gets grabbed by the warrior, has her powers drained and is left for dead on the ground. Samus wakes up though and this is where you as the player then take over. Metroid Dread’s intro segment is not too long with players being taught the game’s basic mechanics rather fast. 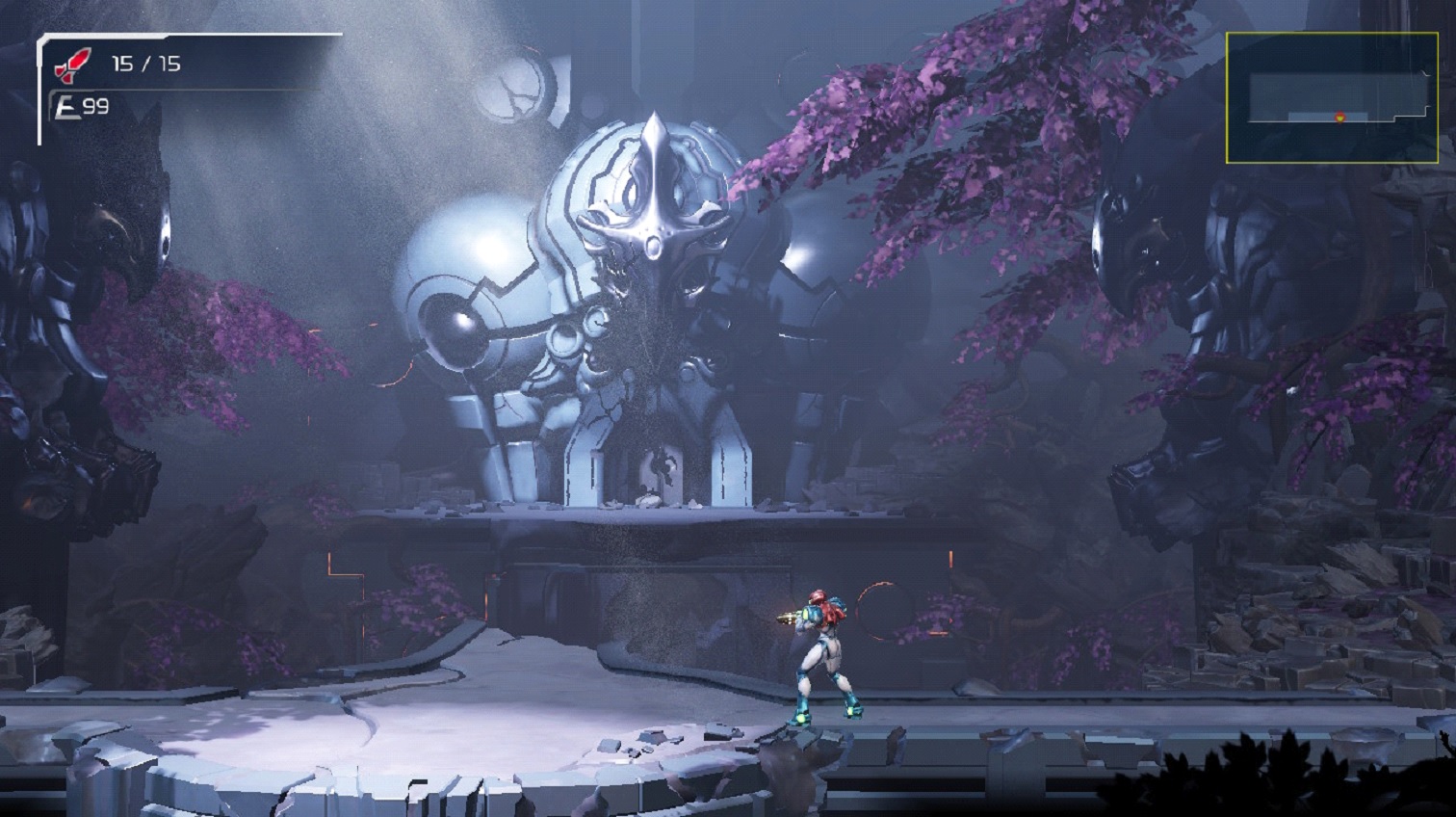 Gameplay in Metroid Dread involves moving Samus around, jumping, firing her beam cannon, firing missiles and a lot of puzzle-platforming adventuring. The same level of excellence that we’ve come to expect from the entire franchise is still as prevalent as ever here with Samus’s exploration throughout planet ZDR’s facilities being a joy. Each location in this game is bursting with both background and foreground detail and graphically, the overall aesthetic of Metroid Dread is a visual feast for the eyes. Nintendo have done a fantastic job with the 2.5D look here and the way the game incorporates different camera angles into boss fights and more is fantastic.

The same level of excellence that we’ve come to expect from the entire franchise is still as prevalent as ever here...

As you adventure through the facilities on ZDR, you’ll eventually start to obtain new abilities. Many of these are series staple abilities such as the iconic Morph Ball and Charge Beam. There’s also quite a few brand new abilities which Samus will be able to use and these are essential to progressing throughout the game. The ability to cloak yourself and go invisible is incredibly useful and definitely necessary to survive encounters with the E.M.M.I robots. 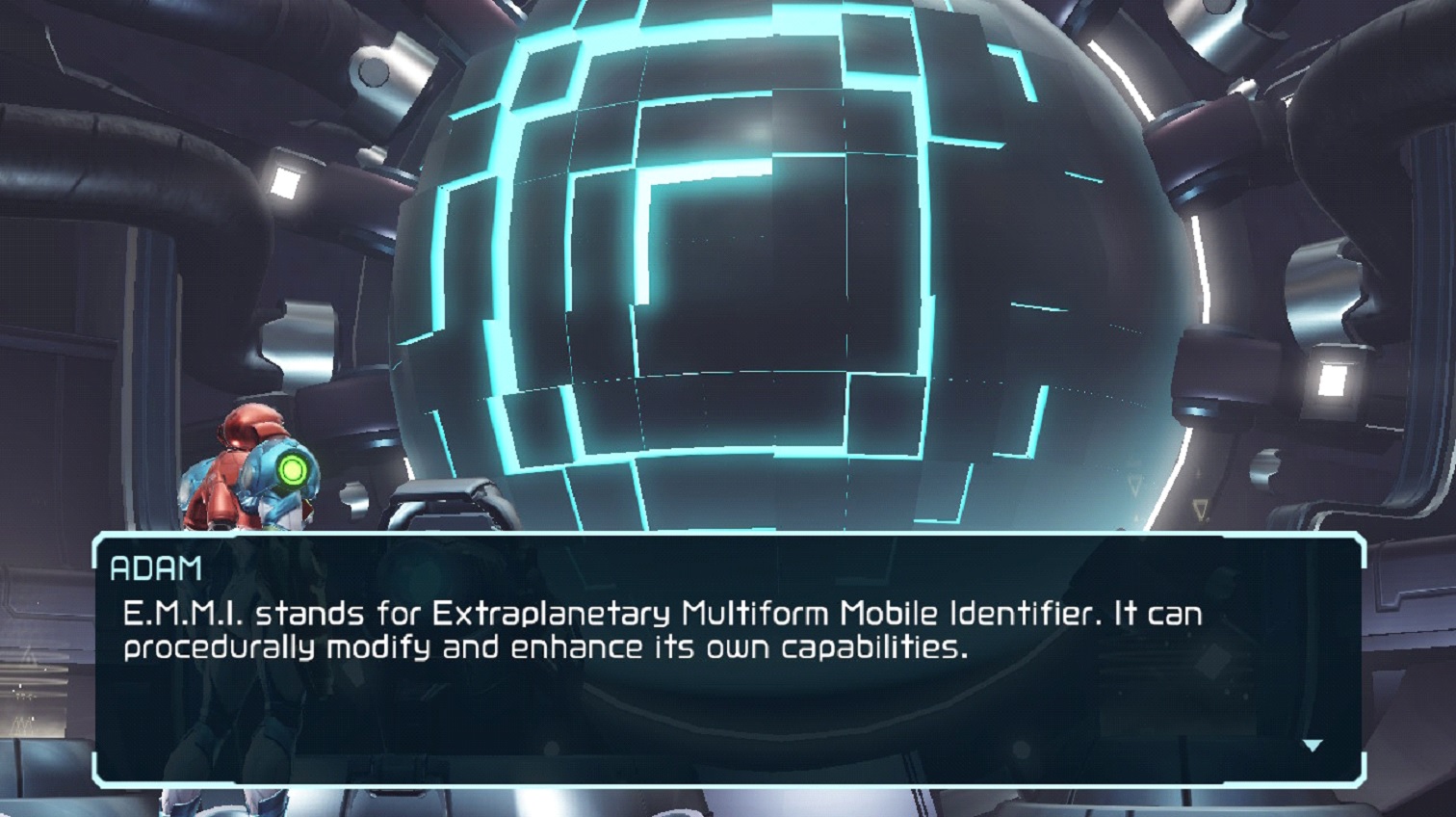 Speaking of which, the E.M.M.I robots are the star of the show here in Metroid Dread. Samus first encounters a damaged E.M.M.I robot and the game immediately makes it clear to you that these are not to be trifled with. The E.M.M.I robots are murderous death machines that will relentlessly hunt you down and try to kill you as soon as their sensors detect you. They quite literally put the feeling of dread into Metroid Dread and this is done remarkably well. Samus will encounter the E.M.M.I robots in specific areas of the map. Unfortunately for her, traversing these areas is necessary to explore further and discover new abilities.

...the E.M.M.I robots are the star of the show here in Metroid Dread.

This means that when you enter an E.M.M.I designated area, you are immediately put on edge. You’ll need to keep an eye out for the E.M.M.I and do your utmost best to avoid being detected and killed by one. This can become a bit frustrating throughout the game though, especially when you’re still exploring a new area and an E.M.M.I area comes up and you repeatedly die to one of these death robots. 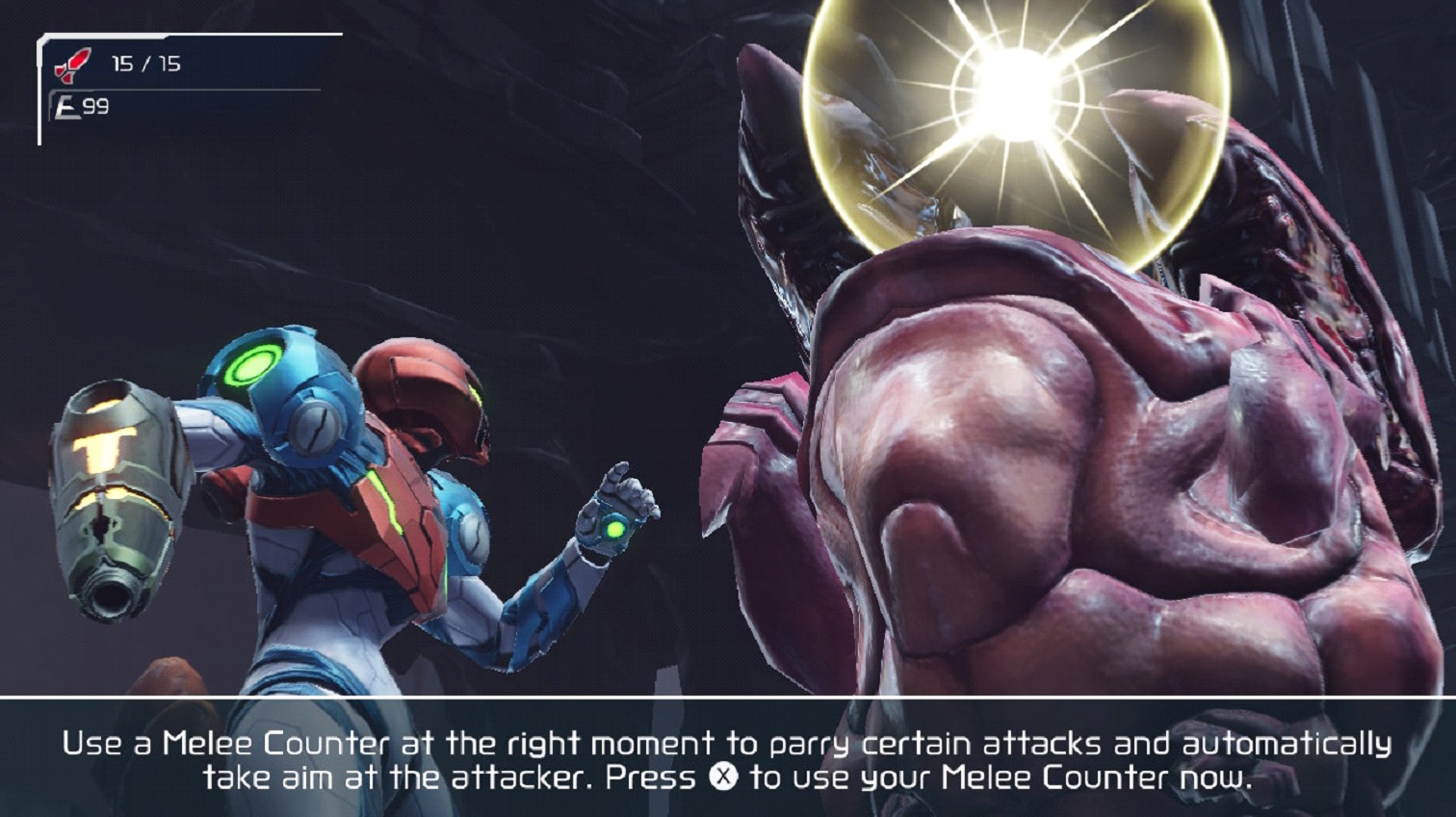 One of the key new gameplay mechanics in Metroid Dread involves using a melee counterattack if you press a button at the exact moment a telltale flash is displayed on screen. You can use this to counter normal enemies as well as survive an E.M.M.I attack if they get close enough. However, the chances of countering an E.M.M.I are extremely low and you’ll most likely end up dying. If you’ve played Resident Evil 2, think of the E.M.M.I as Mr. X, hunting you down to end your life but with the terror factor ramped up immensely. Purely because these robots just don’t let up. 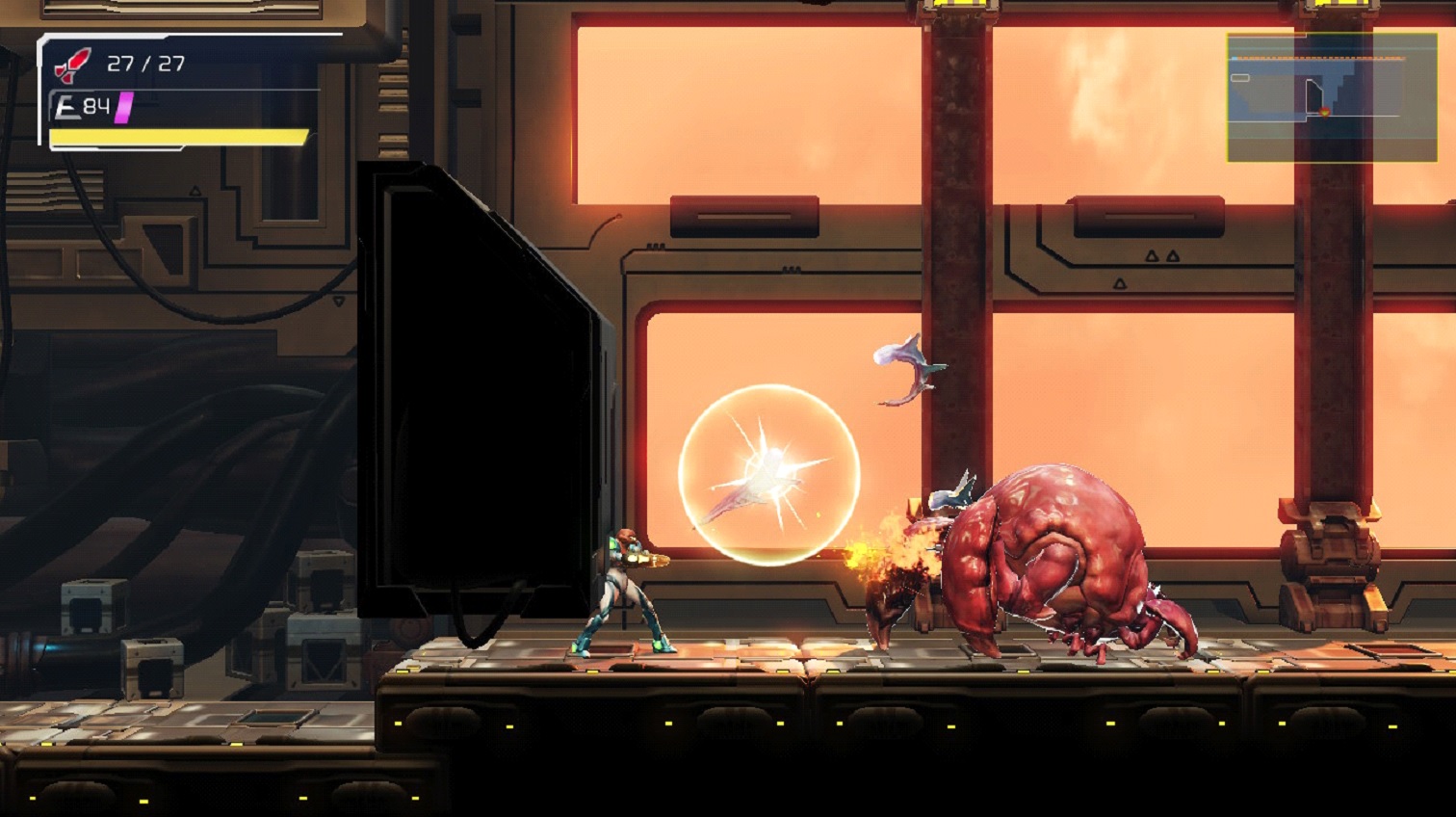 Without spoiling too much, Samus can defeat E.M.M.I robots and has to in order to gain new abilities and progress further on ZDR. However, getting the pre-requisite ability to do this isn’t always easy and requires a lot of exploring in each area. 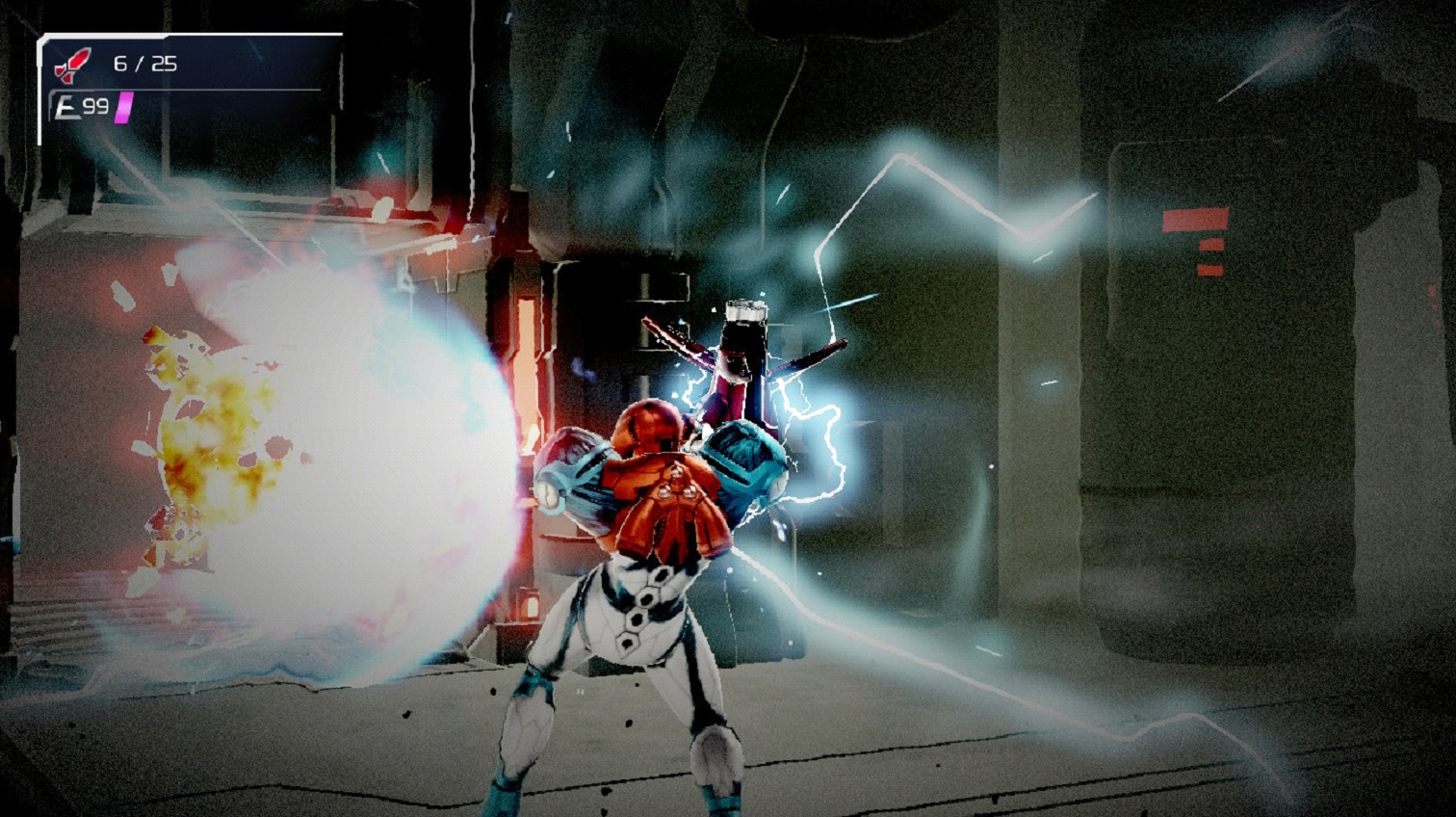 Exploration in Metroid Dread is largely left up to you as the player. Samus gets the bare minimum direction given to her and it’s rather easy to get lost in the game’s world. Thankfully, there are rooms where you can download an area map and once you have access to this, exploring becomes a lot easier. An additional hint system to direct you towards your next main objective could have been worthwhile here for younger gamers but it’s not a major issue that there isn’t one. 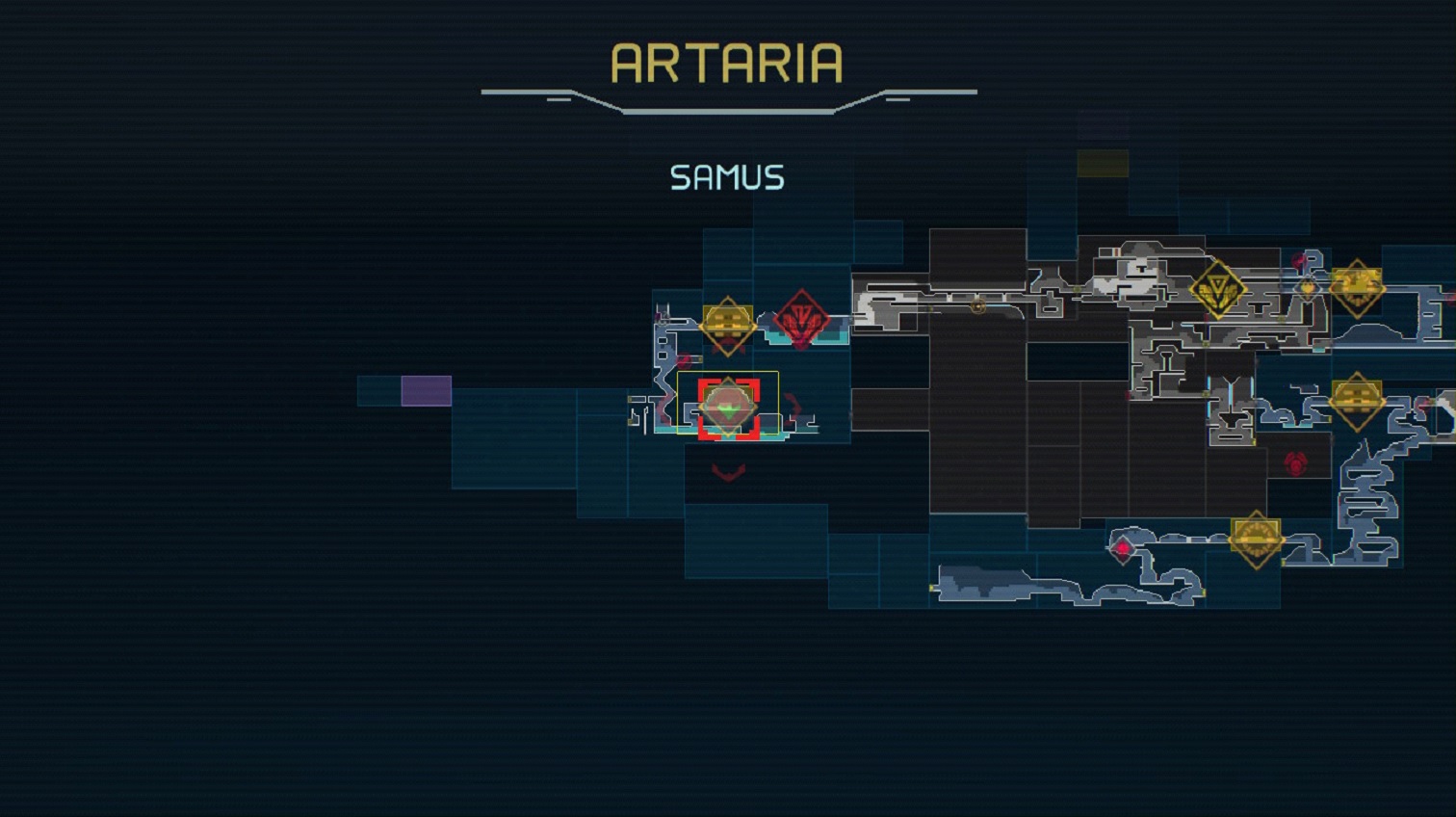 The level design in Metroid Dread is extremely well thought out. Each and every single major area is interconnected and there are multiple ways in and out of each area. Some of the pathways are blocked off to you until you obtain the right ability to progress such as the Morph Ball or Charge Beam so there’s an extensive amount of backtracking that goes on in the game. With that said, backtracking through an area doesn’t ever feel like a chore because you end up discovering completely new pathways as well as hidden energy and missile tank upgrades thanks to your newfound abilities.

...backtracking through an area doesn’t ever feel like a chore because you end up discovering completely new pathways... 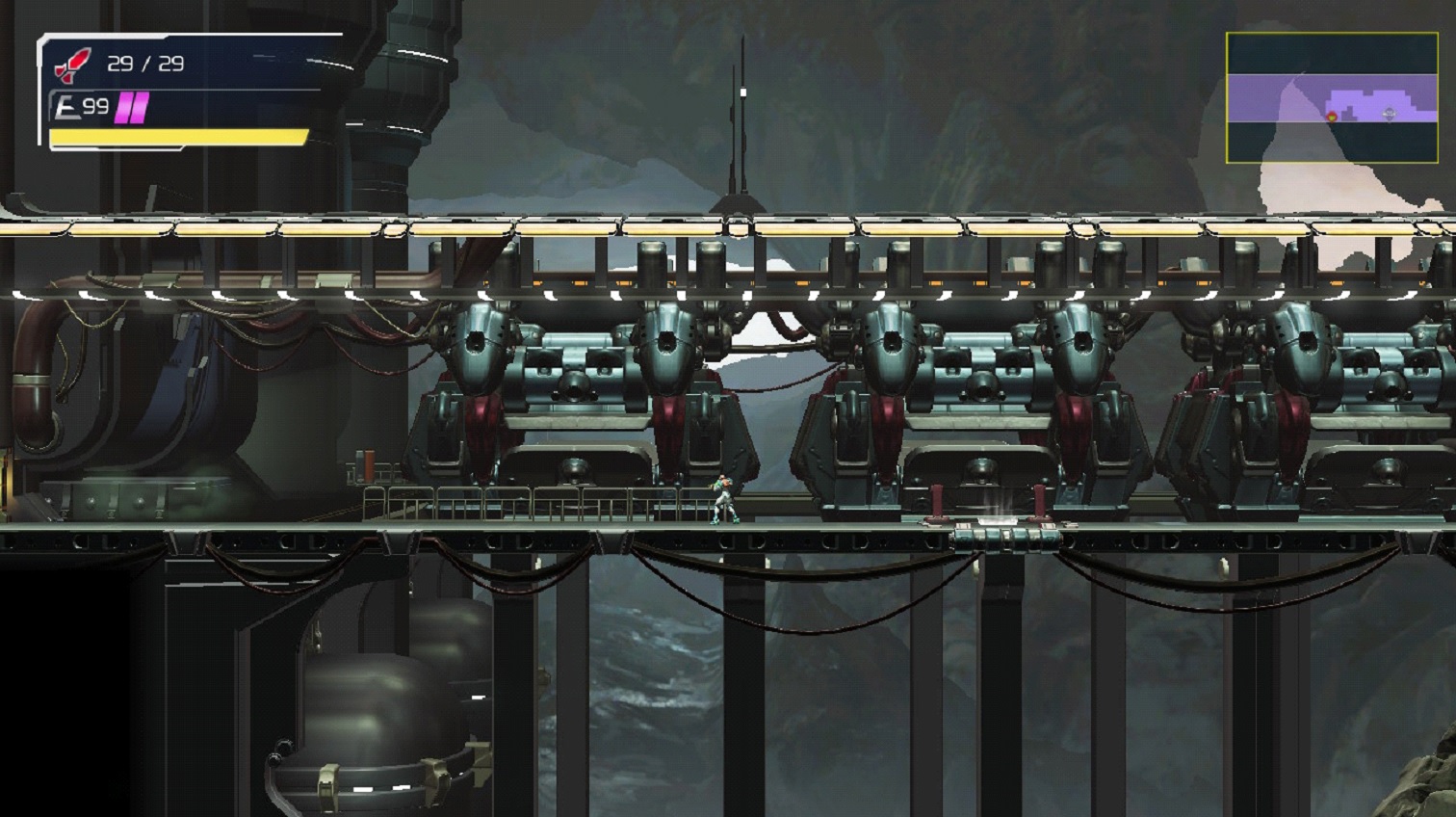 Metroid Dread’s boss battles require player skill and some clever dodging to survive. Once you learn an enemy’s pattern of attack, and after dying multiple times, you’ll most likely end up succeeding in battling them. The feeling of beating a boss or an E.M.M.I is incredibly satisfying and knowing that you’ll be able to explore more and discover new things once you do so keeps you going. 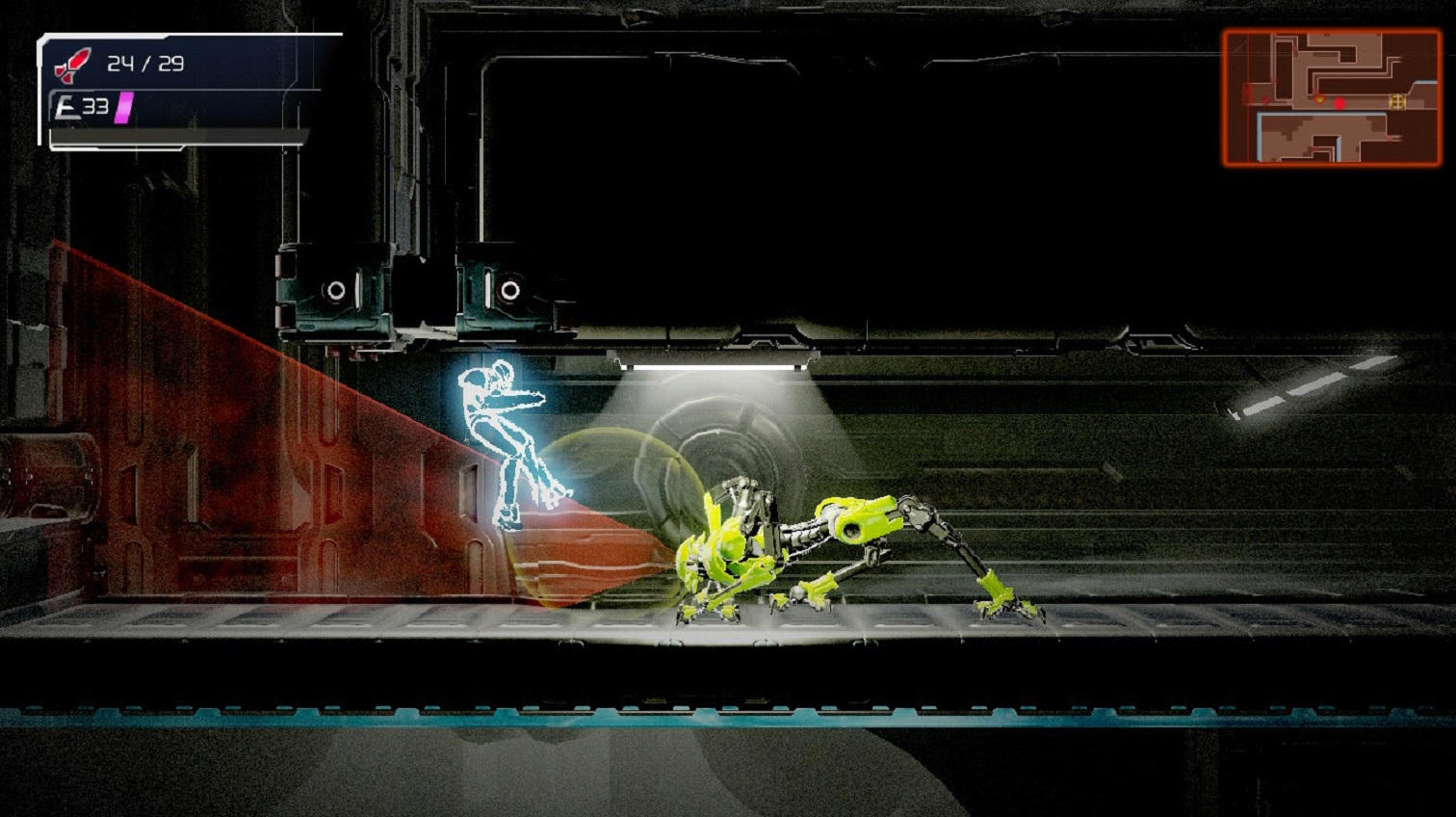 The soundtrack of Metroid Dread is excellent with the sounds of the E.M.M.I robot being quite creepy. The clanking of their metal feet and eerie robot beeps adds to the atmosphere and builds tension in the E.M.M.I areas. When you’re detected and the dramatic music kicks in, you know you need to high-tail it out of there otherwise you’re as good as dead. The voice acting in Metroid Dread involves Samus receiving intel from the Adam artificial intelligence in communications rooms. This is well done and so are the rest of the sound effects in the game. Hearing a fresh 2021 version of the Metroid fanfare when obtaining an upgrade sounds so rewarding too. 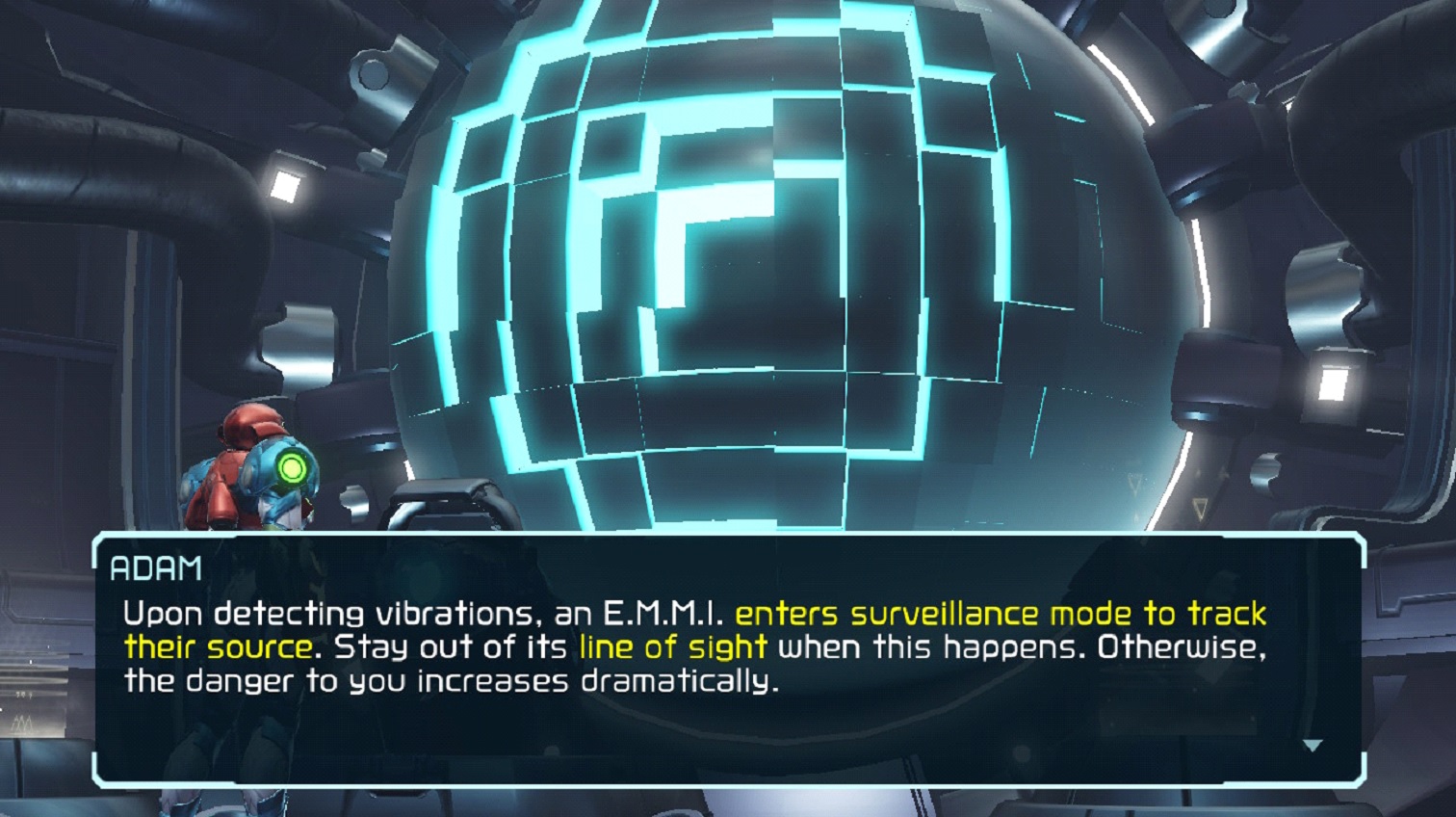 Metroid Dread runs flawlessly on Nintendo Switch in both docked and handheld mode. If you’re lucky enough to own an OLED Nintendo Switch, the game will certainly look ridiculously good on the higher quality screen thanks to the art style and aesthetic of the game.

Overall, Metroid Dread is easily one of 2021’s best games. We’ve been starved of Metroid for so long that getting a brand new mainline entry into the franchise is so incredibly welcome. Players who have played any of the previous Metroid titles will immediately get that “Metroid” feeling from this title and it’s pure bliss. The fantastic world and level design makes Metroid Dread a highly recommended title on Nintendo Switch and one that newcomers should consider too. Metroid Dread doesn’t overstay its welcome either, coming in at roughly around 8 to 10 hours (Probably more if you get lost along the way someway) but it’s a blast from start to finish. If you’re a fan of puzzle-platformer 2D games, one of the pioneers of the genre itself is now back and we’re extremely here for it.

Immense feeling of satisfaction when beating an E.M.M.I or a boss

Lack of guidance towards your next major objective

Dying repeatedly to E.M.M.I robots can get frustrating over time 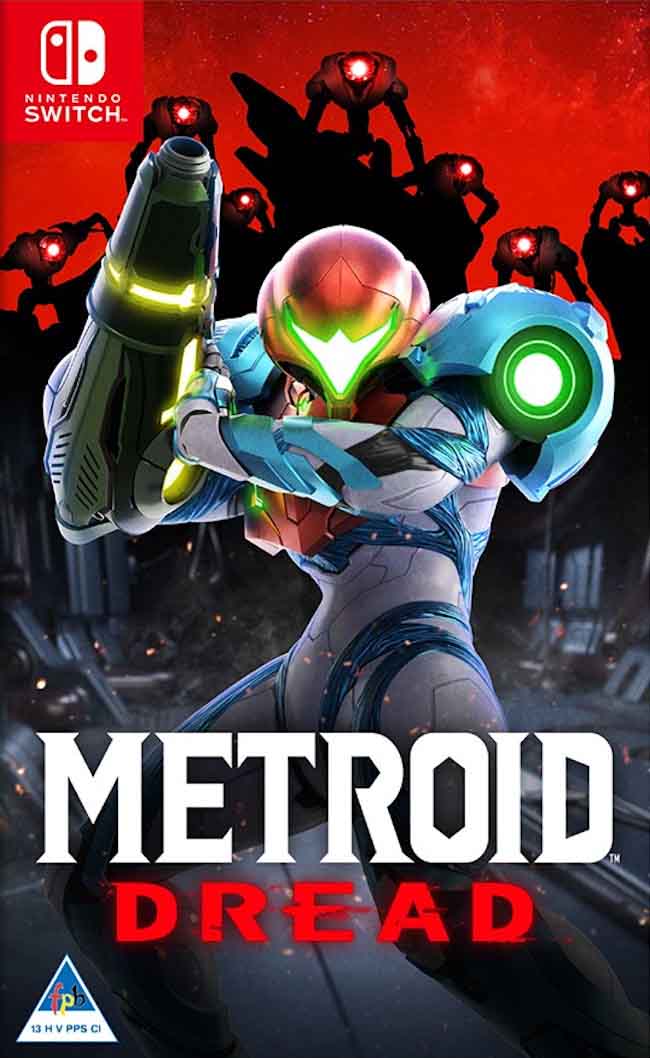