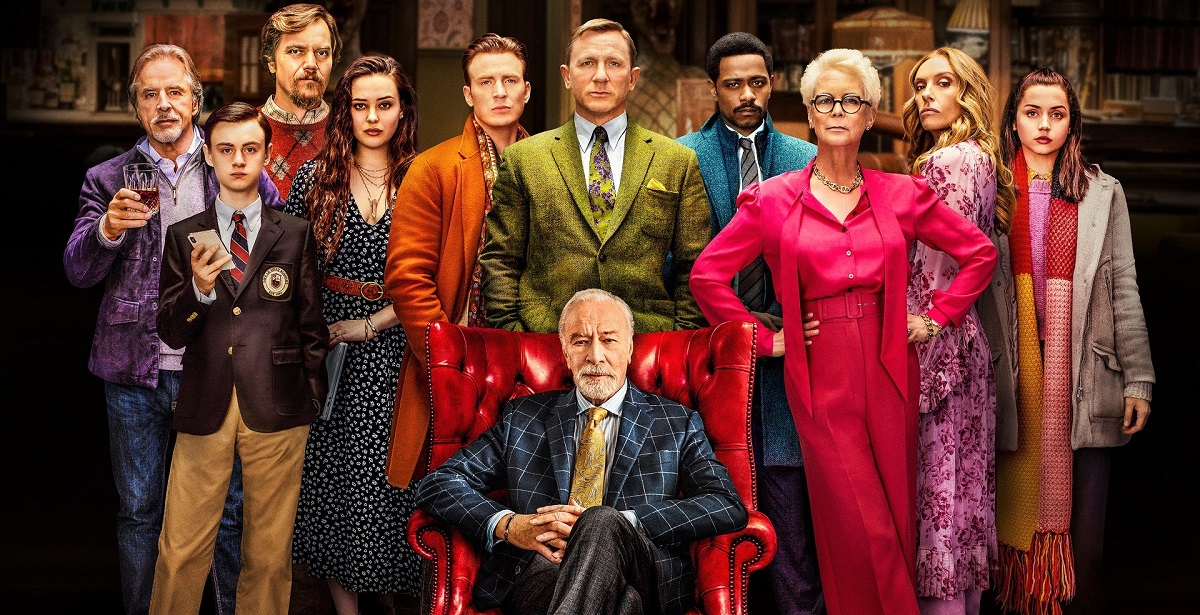 Rian Johnson has veered from nerd hero with Looper to nerd villain with Star Wars: The Last Jedi, but what both films had in common was Johnson’s own sense of what makes a genre interesting and him stamping his own mark on the genre. With Looper he redefined the time travel and consequences film by making Joseph Gordon Levitt and Bruce Willis wear a weird prosthetic nose while living the same life and trying to change their own future and past. The latter film, well, let’s say that his interpretation of the mythos resonated with critics and some fans, while angering many, many others. 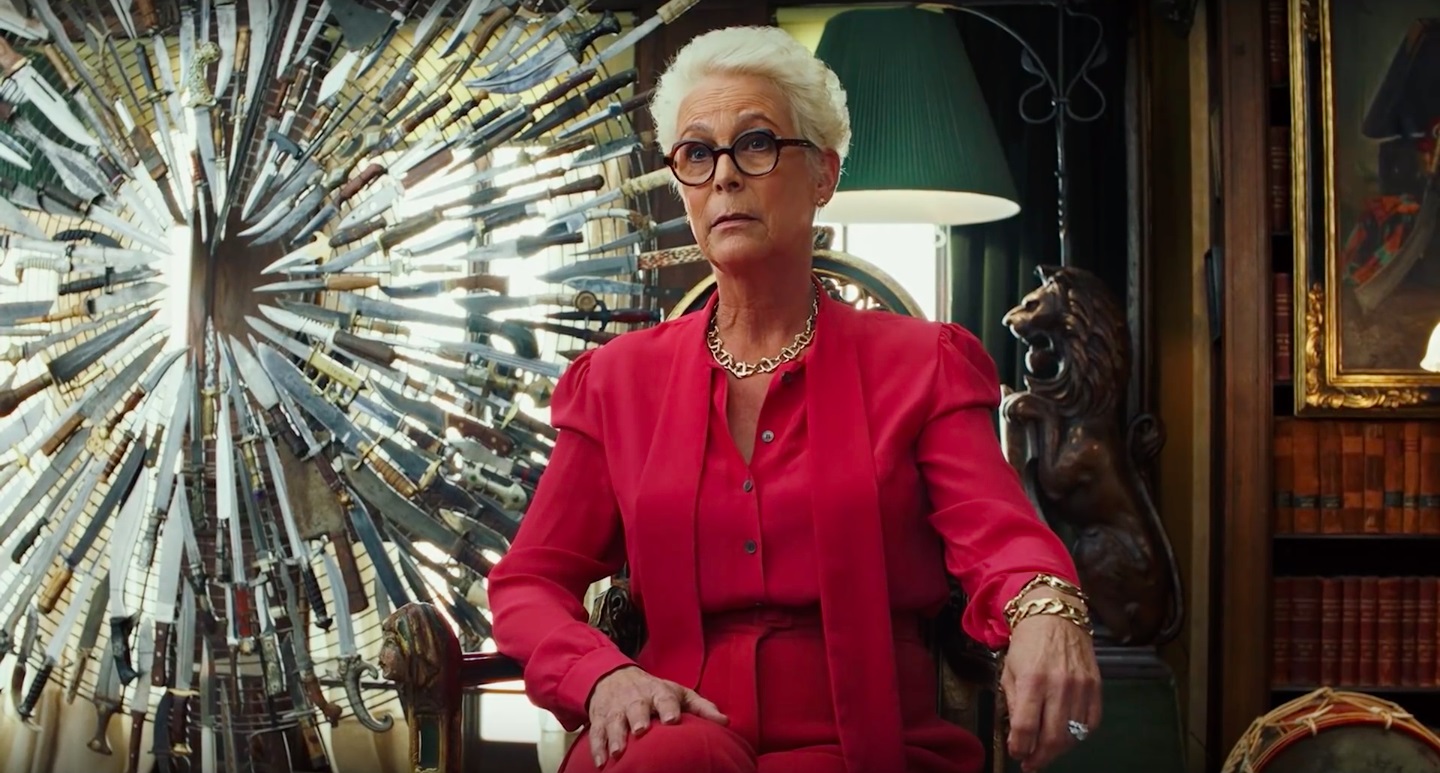 With Knives Out, Johnson turns his eye toward the venerable country estate murder mystery, popularised by Agatha Christie. With a star-studded cast gathered at the mansion of famous mystery author Harlan Thromby for his eighty fifth birthday, the scene is set for a murder that only the famous detective Benoit Blanc can solve.

The plot is simple – Harlan Thromby, the patriarch of the Thromby clan, dies on the night of his birthday party. What is initially assumed to be a suicide, is suspected to be a murder mainly because Benoit Blanc is hired by a mysterious benefactor to investigate. Just like his inspiration, Hercule Poirot, he knows something is amiss but just cannot pinpoint what and through interviews, and the exercising of his little grey cells, to borrow a phrase, he unravels the mystery. And just like Poirot he hauls a sidekick along, the sympathetic Marta, Harlan’s nurse and friend. 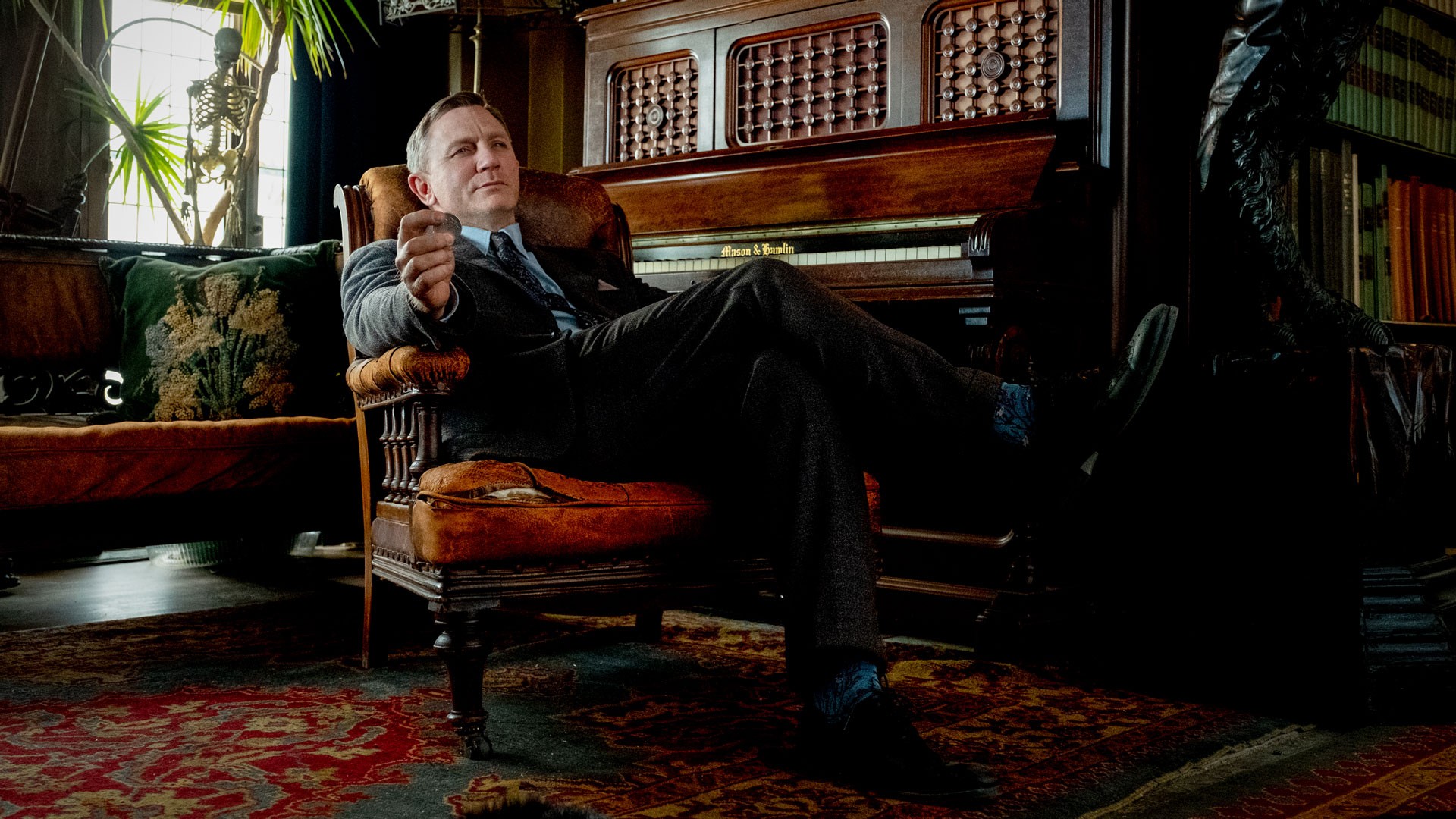 To reveal more risks moving this review into spoiler territory, but the plot is honestly secondary to the characters and the excellent performances by the cast. Joining Daniel Craig as Blanc is Jamie Lee Curtis as Linda Thromby and Michael Shannon as Walt Thromby, Harlan’s two surviving children. They in turn are supported by Toni Collette as Joni Thromby, a version of Gwyneth Paltrow’s Goop entrepreneur and Harlan’s daughter in law and a great cameo performance by Don Johnson as Linda’s husband, Richard. Of the remaining family members, the only one of real consequence is Chris Evans’ Ransom Thromby, the grandson. The standout performer and true star of the film is Ana de Armas as Marta. The film focuses almost exclusively on her and her inability to lie; she throws up whenever she lies, making her the perfect foil for Blanc.

The standout performer and true star of the film is Ana de Armas as Marta.

De Armas steals the show as she navigates this rich entitled family’s politics as well as the twists and turns of the central mystery. Marta is brilliant as the soft spoken and withdrawn nurse assisting Blanc while fighting off the suspicions of one and all. As the lone outsider who is closer to Harlan than anyone else, she would be the natural suspect, but her inability to hold onto her lunch and lie makes her the least obvious suspect. She obviously cared about Harlan and tolerated the family’s nonsense no matter how well intentioned they think their arguments are or how welcome they made her feel. 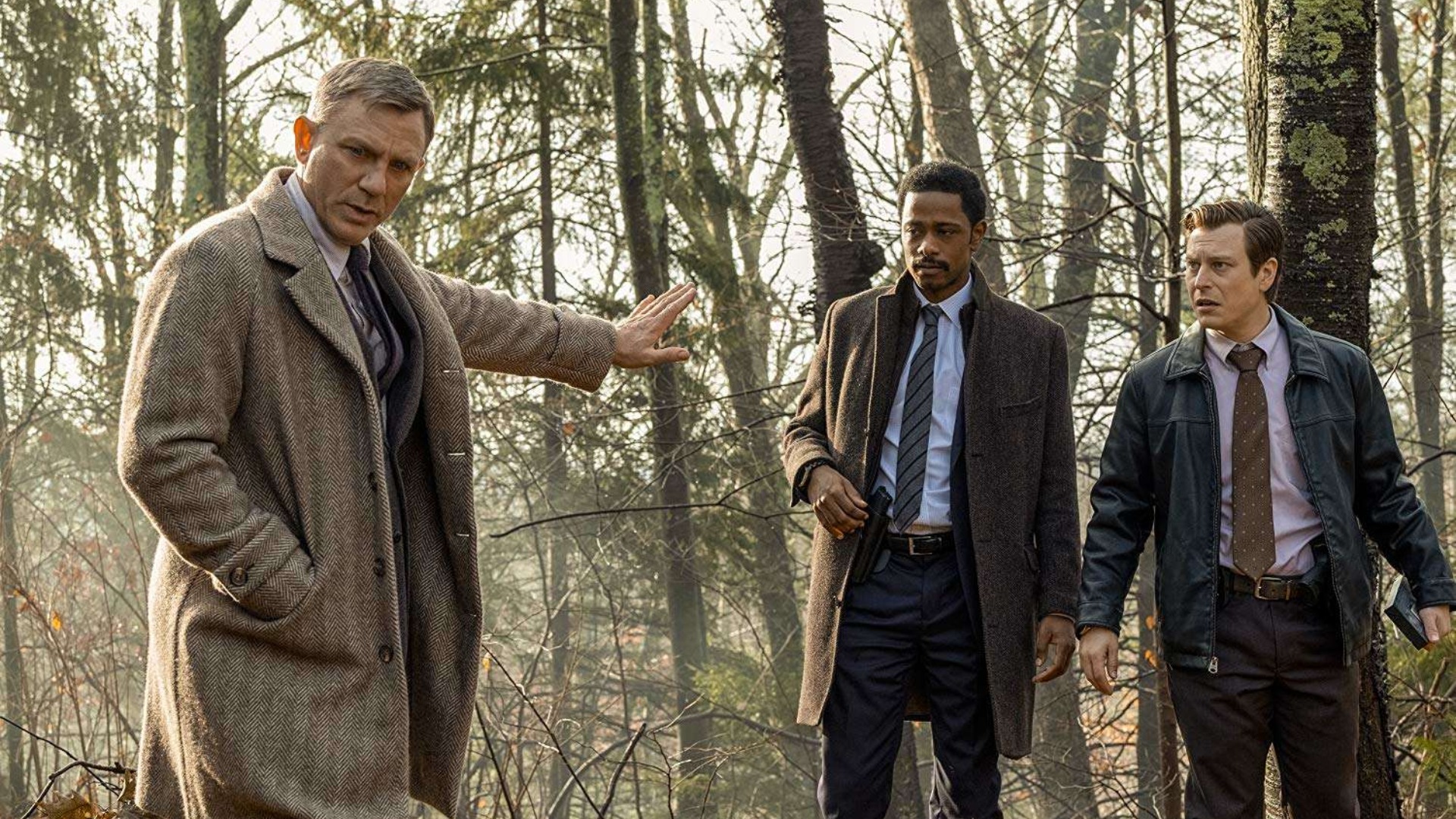 Capably supporting De Armas is Craig as the oddly accented Blanc. He’s supposed to have some sort of southern accent, but it is so obviously fake that you wonder if that was intentional to add to the comedy. As Blanc he plays the detective fairly straight, but sadly he isn’t given enough of the script to really exercise his brain and solve the mystery via deduction. He is merely the detective propelling the plot along in most cases by expositing since the film works in flashbacks to reveal crucial events leading the audience to discover motivations and possibilities long before he is given the significant clues to do so. Despite that, Craig is having a ball playing the detective, chewing on his cigar as he moves from room to room and interview to interview, hoping to unravel the threads of this mystery.

Craig is having a ball playing the detective...

Supporting these two are the rest of the cast who superbly act the parts of rich, spoilt idiots more concerned with money and appearances than their relationships. Even those that initially come across as caring quickly turn as the ugly truth of their lives comes to light. Of these I particularly enjoyed Jamie Lee Curtis and Don Johnson, two actors not given enough credit for their talent given the roles they have chosen in the past. As the Linda and Richard, a married couple more concerned with appearances than anything else, they play these roles as if born to it. Somewhat harmless, but ultimately poisonous and unpleasant, they are restrained enough to be believable as a couple trapped in a long dead marriage by their own inertia and sadly money. 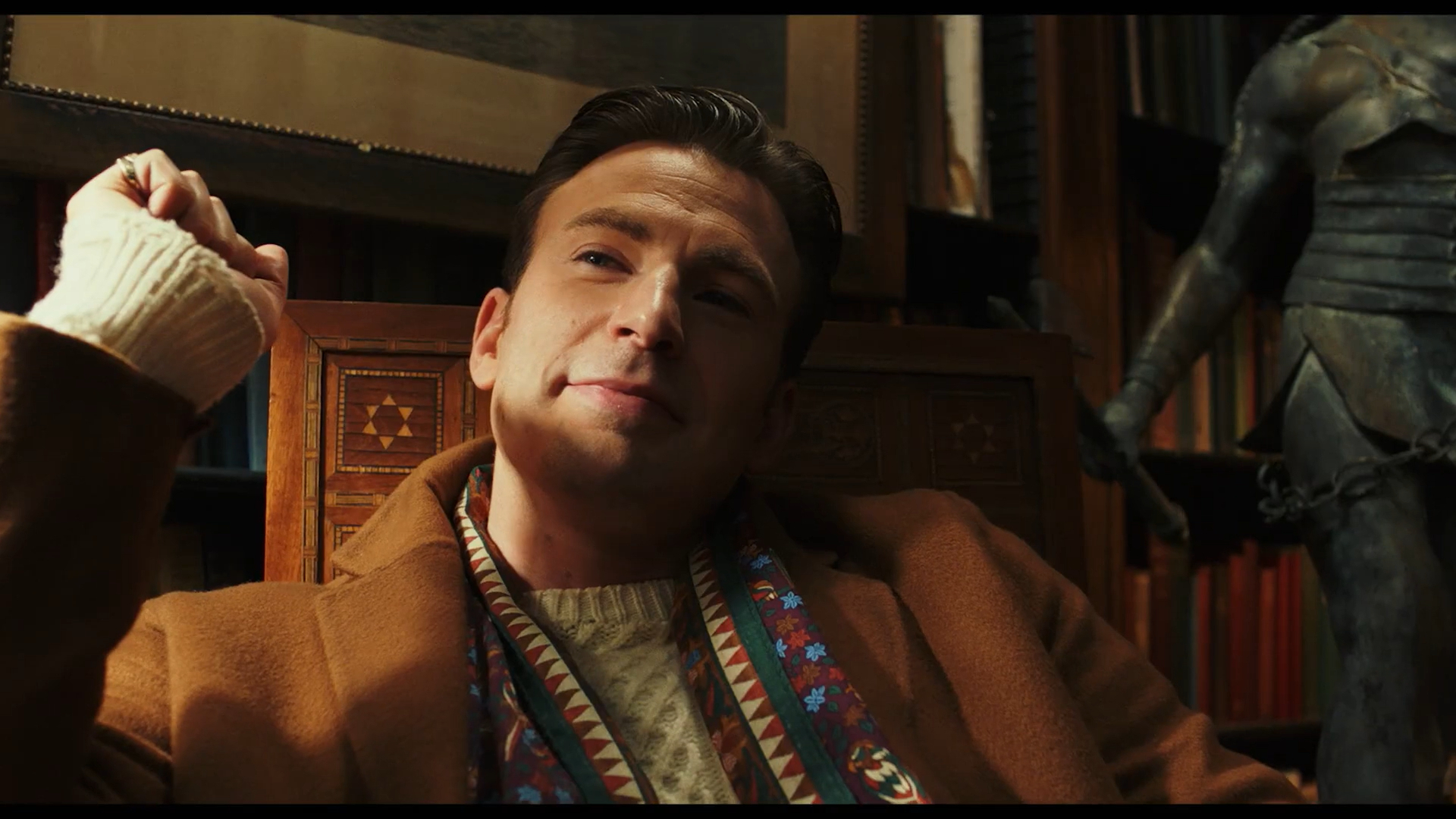 Michael Shannon and Toni Collette, also sporting an odd accent, are good in their roles, but are not in Knives Out enough to make the roles standout. Shannon exudes some menace in the second act, but I felt that it was too little to late to make his character standout. Collette’s Joni is not quite what she seems as the new age influencer, but she is non-descript in this role.

The actor who does make the most of his short screen time is Chris Evans. Playing against type, the Steve Rogers type, he is the quintessential trust fund baby, rude to those he considers beneath him, lazy and entitled. Obviously relishing the role, Evans shows his range as the smarmy Ransom. Smart but lazy, Ransom is slimy and arrogant and someone you imagine most born into wealth kids to be.

The setups of the previous acts aren’t fully realised as if Johnson had no way of actually paying off those twists.

The film runs for what has become the standard two hours and the first two acts run along at a fair clip with the twists and turns keeping you guessing and on the edge of your seat. The third act though drags on as the mystery is slowly revealed. And this is where the film reverts to a traditional resolution of a murder mystery. The setups of the previous acts aren’t fully realised as if Johnson had no way of actually paying off those twists. Despite that, it is still an enjoyable resolution, albeit a predictable one, one that if you paid attention during Act Two you would’ve realised was coming. But the journey to that Act is so enjoyable that I can forgive the ending, in the greater scheme of things it doesn’t really matter.

Knives Out is a wonderful murder mystery that shows off Johnson’s abilities as a writer/director as well as his weaknesses with a large cast. And that cast is what makes this movie more than the mystery and plot. From Christopher Plummer as Harlan to Jamie Lee Curtis to Don Johnson to Chris Evans to Daniel Craig and finally to the standout Ana De Armas, the film is packed with great acting - acting that elevates the film. If you enjoy murder mysteries, you will enjoy this film and with the revival of Poirot in Murder on the Orient Express, I hope that this signals a revival of the genre.
8

A film that asks you to think just a little

Mystery is not that important