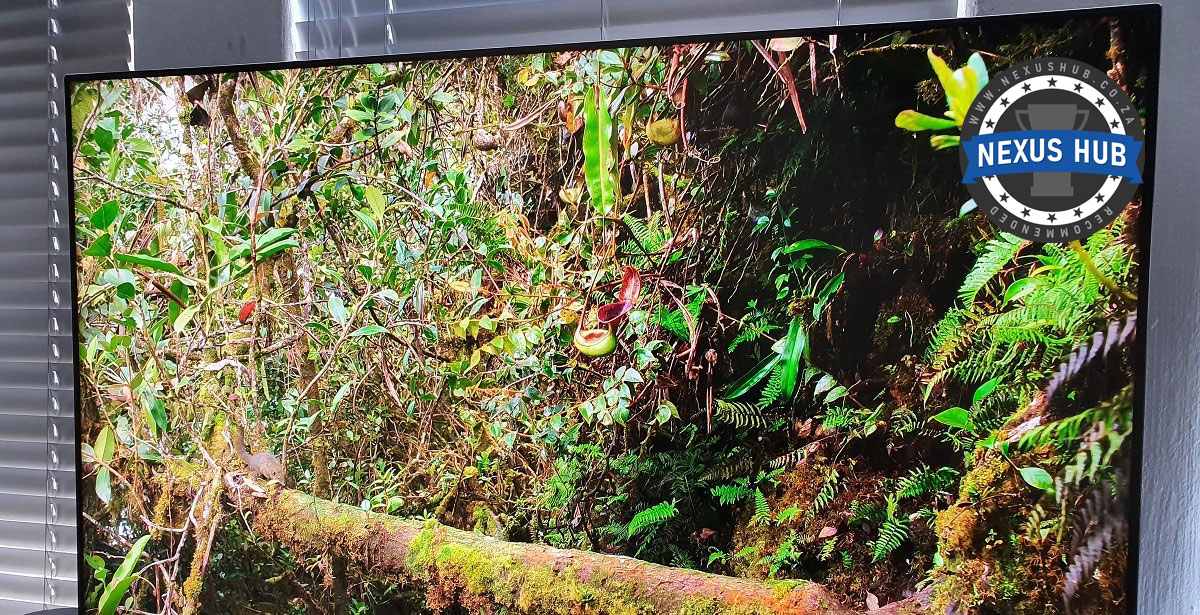 TVs are a pretty integral part of our everyday lives, whether we care to admit it or not. A TV has not only become a staple in our households, but have started to become a centrepiece of living rooms - as they should, considering we use them for both passive and active content consumption. Hisense has always been a major player in the TV space, and the new Q8600 has proven why. 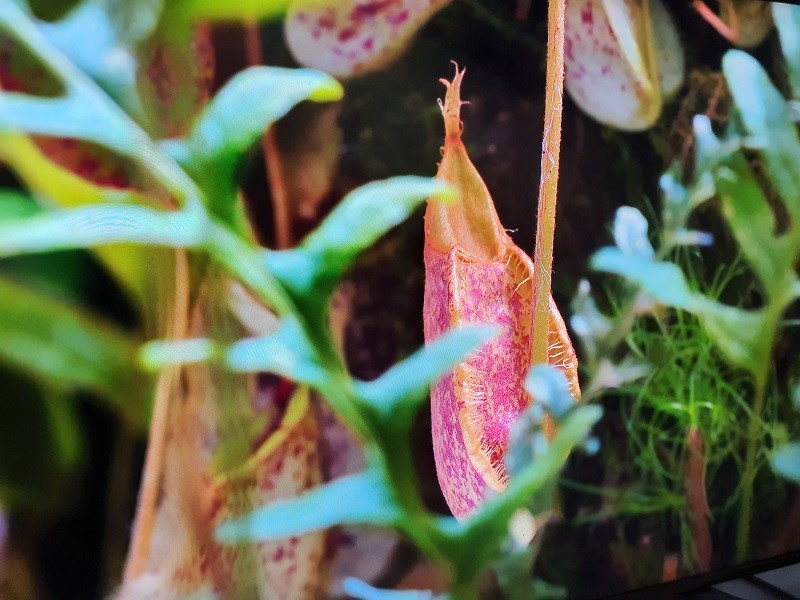 The Hisense Q8600 features an ultra-slim bezel design, offering a frameless viewing experience. The incredibly thin panel is mounted atop an aluminium-finish stand featuring a modern design aesthetic that will fit with most living room decor. On the face of it, it is a minimalist design, with a simple Hisense logo on the slightly larger bottom bezel.

At the rear of the unit, we see a slightly chunkier portion of the otherwise ridiculously thin Quantum Dot display, which houses the processing internals, connections, as well as the integrated soundbar. The Hisense Q8600 offers four HDMI ports that are all 4K@60Hz compatible with HDCP version 2.2, integrated WiFi as well as LAN connections, HDR10 display, Dolby Atmos, amongst other high-end features.

Excitingly, this is the first time we got to see Hisense’s patented Quantum Dot image colouring in action, which offers a colour spectrum of over 1 billion colours, as opposed to the standard 16.7 million colours in sRGB panels. Hisense's Smart OS, VIDAA, is used in the Q8600, but there are other models in the Hisense range that feature standard Android OS. Lastly, the Q8600 also features true HDR10 capability, along with Dolby Atmos HDR sound, taking advantage of the integrated soundbar, to bring audio to life.

Taking it out of the box, the TV itself and the stand it rests on are separate, and we recommend you bring a friend along to help you out - even just carrying the box from the car into your house could be a challenge. However, assembly is as easy to screwing the two easy-to-fit stands into the bottom, and setting it where you want it in your space. Thankfully, the stands cannot be attached incorrectly, as the shape of them slots them into the TV, making things a little easier. 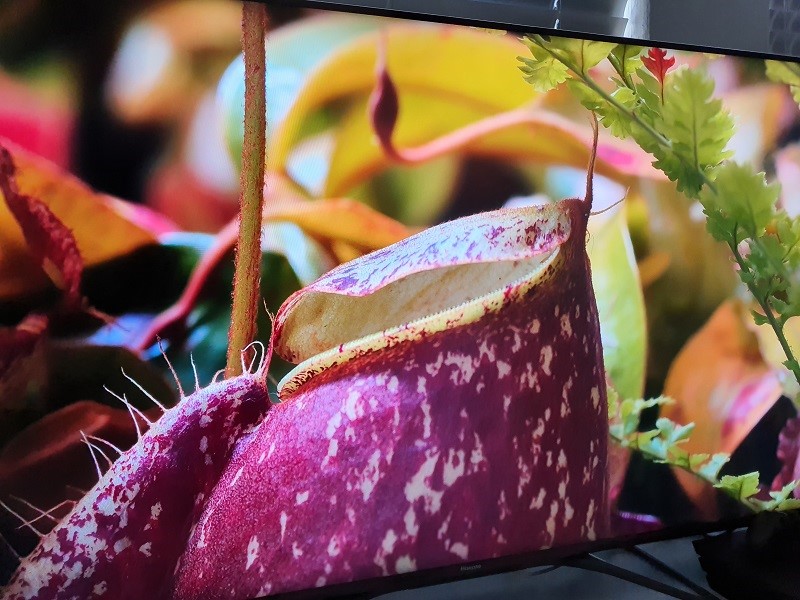 Once on for the first time, the TV will take you through a quick and easy-to-navigate setup menu. This includes connecting to the internet, adjusting basic settings, and getting you acquainted with the smart VIDAA OS. Setup takes less than five minutes, which is when you can then explore your new TV to your heart's content, and plug in your home entertainment systems.

The 55” 4K ULED screen is beautiful to look at, even in the menus. Obviously, no one buys a TV to stare at the wonderful menu system, so we booted up Netflix using the pre-installed application directly from the TV, using the featured Netflix button on the remote. Using Stranger Things as our initial content, blacks and dark areas are displayed phenomenally, thanks also to the QuantumDot colour technology. There were no areas of grey around the edge of the panel, and there was no faded or murky dark areas across the entire screen. Furthermore, areas of bright light were contrasted, and displayed, incredibly well against completely black backdrops, and there was no white light bleeding into dark areas, which is the role of Local Dimming, meaning each area of the TV is controlled independently.

To truly put the Quantum Dot colour technology through its paces, though, we played David Attenborough’s Our Planet, particularly episodes that featured vivid jungle vistas, with dense and dramatically colourful wildlife. Tropical birds, as anyone knows, are typically bright with blues, greens, yellows, and reds, along with some featuring polar opposite colours, such as toucans. The Hisense Q8600 handled all of the rapidly changing colour palettes remarkably well, offering breathtaking and mesmerising visuals.

No matter what 4K content we threw at the Hisense - aside from YouTube - was made even more magnificent by the inclusion of Dolby Atmos Sound and HDR10. In passive content consumption, we hard birds chirping on the other side of our room, and in some cases, behind us as well, offering a truly immersive sound experience. In active content, such as gaming, we heard bullets flying past our heads, gunshots behind us, and - if you are a horror fan - we had a heart attack when something came flying at us, screeching in our ears. The availability of HDR10 is more common in today’s smart TV’s, but the addition of Dolby Atmos for supported content is just astoundingly immersive. 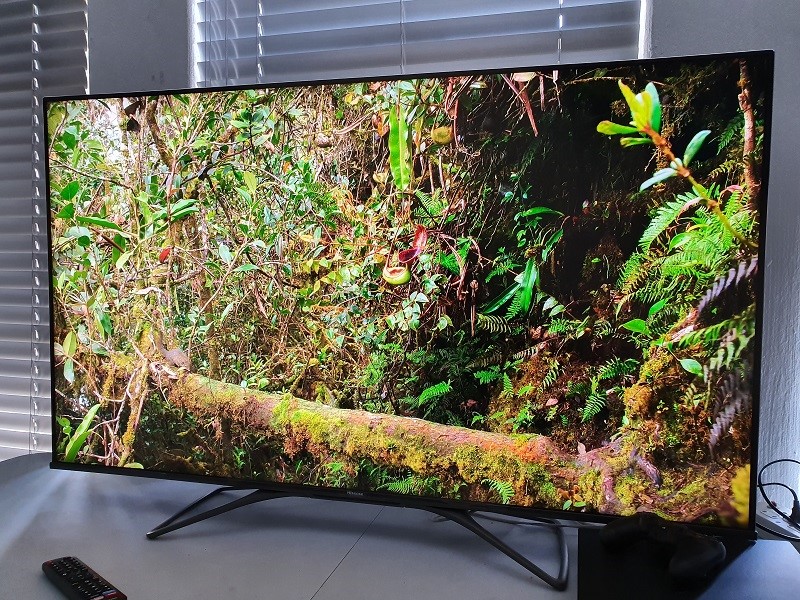 Displaying the same content using a media box or a console, even a PC, was exactly the same as it would be if using the integrated applications through the VIDAA operating system, which shows that Hisense has kept media entertainment systems in mind, as opposed to favouring their integrated systems.

In terms of gaming, we used a PS4 Pro as well as a high-end gaming notebook - the ASUS Strix Scar II GL504W. The TV features a 120Hz panel, allowing us to take advantage of the high-refresh rates in competitive games. While it was odd at first, playing titles such as CS: GO and Overwatch at such a high refresh rate, on a 55” TV was pretty impressive. We also tested DOOM at 4K Ultra settings, as well as The Division 2, and Assassin’s Creed: Odyssey, and while the frame rate was much lower - roughly 45 - 60fps - there was still no evidence of lag, no ghosting on the screen, and the visual quality was impeccable.

On console, we stress-tested the viability of a TV such as this for fighting games, as well as couch co-op titles. When we performed our initial testing, everything appeared to run smoothly - there was no lag in the fighting games we tested (in this case Street Fighter V and Tekken 7), and couch co-op was absolutely perfect. However, after a system software update, there was a tremendous amount of delay between controller input and screen output, which we replicated using similar titles. Unfortunately, it appeared that the software update had introduced lag where there was none, but we are hoping that Hisense is aware of this and are currently fixing it. Thankfully, however, this was not a hardware issue.

The VIDAA OS by Hisense is fairly easy to navigate, much easier than other proprietary operating systems in smart TVs. VIDAA has a number of applications for you to download as well, including Amazon Prime as well as YoutTube - both of which have dedicated buttons on the remote - as well as Showmax and DSTV Now. VIDAA will also throw up recommendations based on the type of content you consume, which is linked through Netflix, and you can customise the layout of your apps, to make your favourites easier to get to. 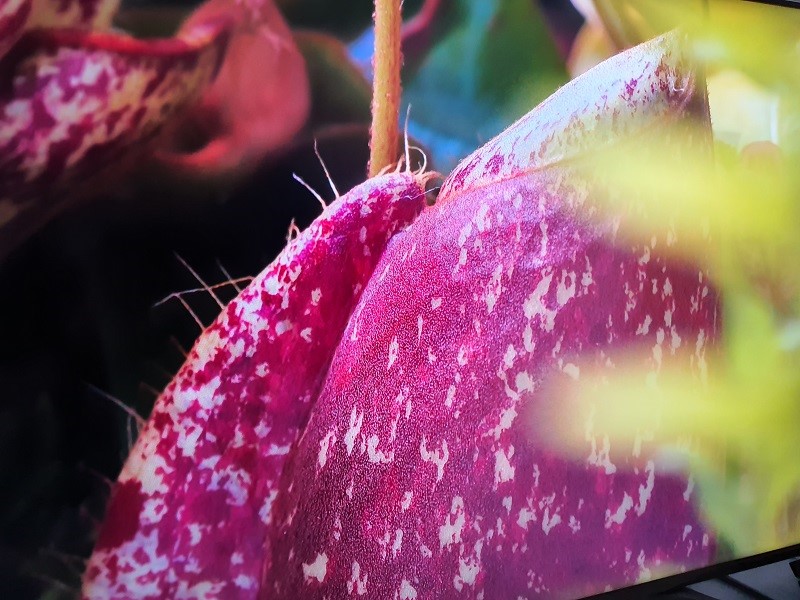 Overall, the Hisense Q8600 4K ULED TV is an incredible smart TV, offering a marvellous and sensational experience across both gaming and passive content consumption. We were slightly disappointed in the lag issues cropping up with the software update, but the superlative display of dark blacks, and rich textures, along with preventing lighting from shining through and colour bleeding, makes this a stellar smart TV.