Beauty and a beast. Gigabyte’s GeForce RTX™ 3060 VISION OC 12G is a flat-out gorgeous graphics card. I mean this wholeheartedly but if you don’t believe me, just take a look at the images below. Gotta love that futuristic, clean look. 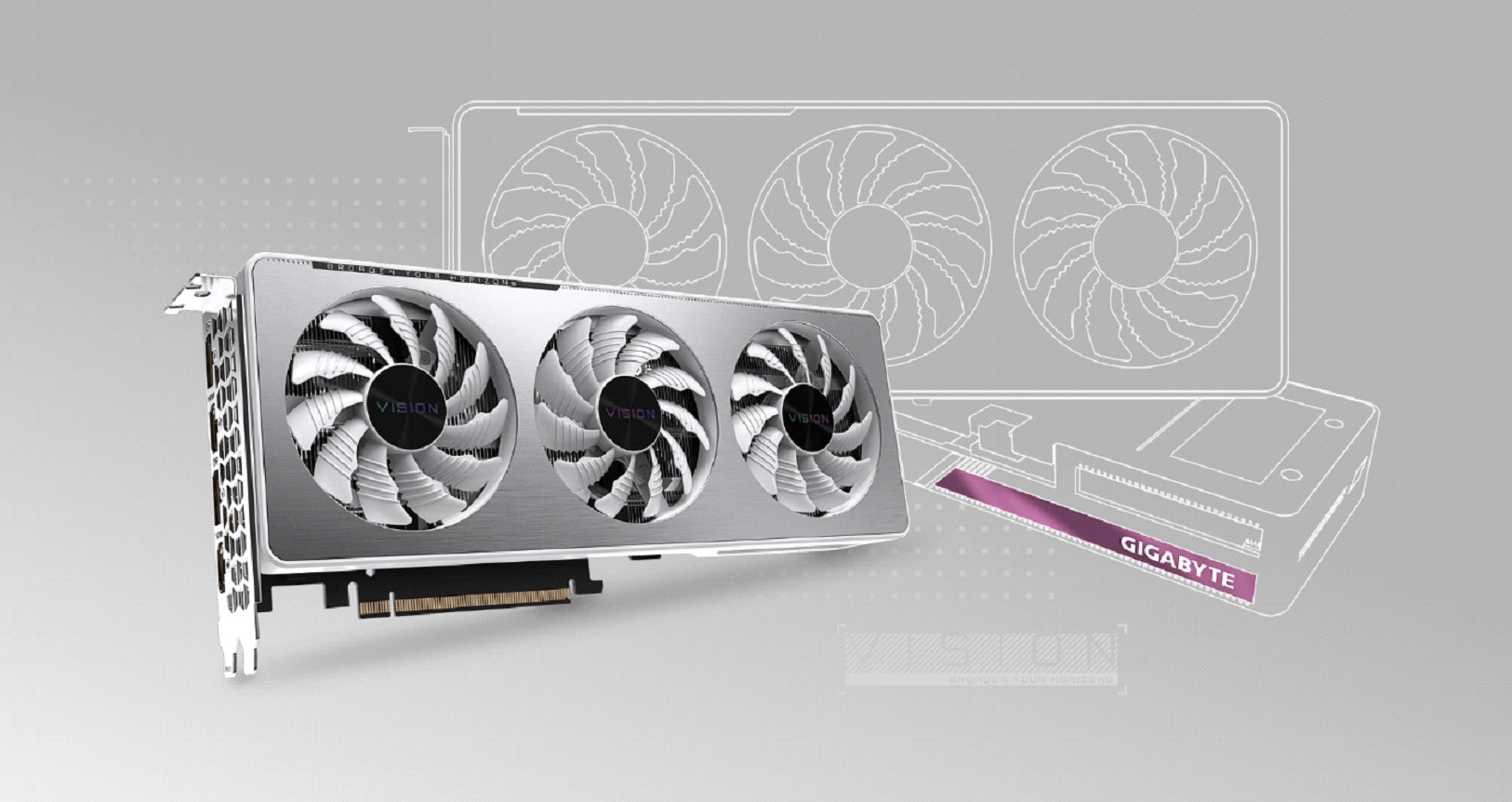 So while the RTX 3060 Vision OC from Gigabyte has the looks nailed down, we need to obviously delve deep down into the performance aspects of the card before we can make any recommendations or conclusions. First up are the official tech specs. You can check these out below:

The key features of the card are that is makes use of NVIDIA Ampere Streaming Multiprocessors, 2nd Generation RT Cores, 3rd Generation Tensor Cores, is integrated with 12GB GDDR6 192-bit memory, has a WINDFORCE 3X Cooling System with alternate spinning fans and has a core clock of 1837 MHz (Reference Card: 1777 MHz).

The RTX 3060 Vision OC has a protective back metal plate and has support for Gigabyte’s RGB Fusion 2.0 software which controls the gorgeous LED on the card itself that displays the word “GIGABYTE” in glorious RGB colours.

The RTX 3060 Vision OC is rather surprisingly aimed at the budget consumer who wants to spend slightly more than they would purchasing a Gigabyte GeForce RTX™ 3060 GAMING OC 12G. The primary difference between the two cards being the overall look and aesthetic. Would you pay extra for a card that looks as gorgeous as this one? Chances are a lot of gamers most definitely would, however it all comes down to personal preferences and budgets. In any case, either card will certainly deliver great performance.

To test the performance of the RTX 3060 Vision OC, we fired up a whole bunch of tests. Starting off with 3D Mark’s Timespy, the card performed as follows: 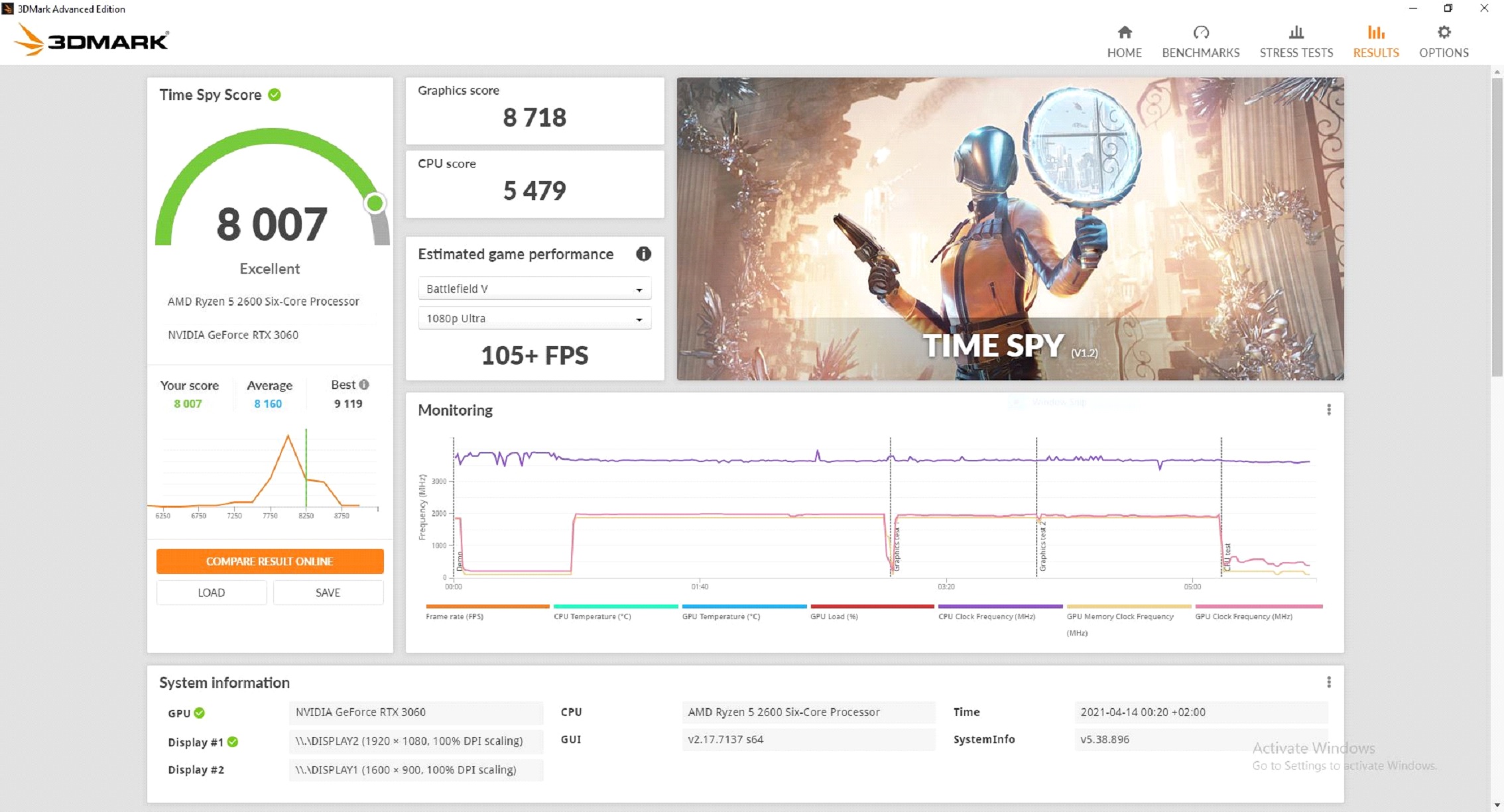 Yielding a score of 8007, you can clearly see that at 1080p resolutions, the RTX 3060 Vision OC will tear through any modern game. To test this further, the Port Royal test was also run to see how it performs when the Ray-Tracing features are needed. The following results were obtained: 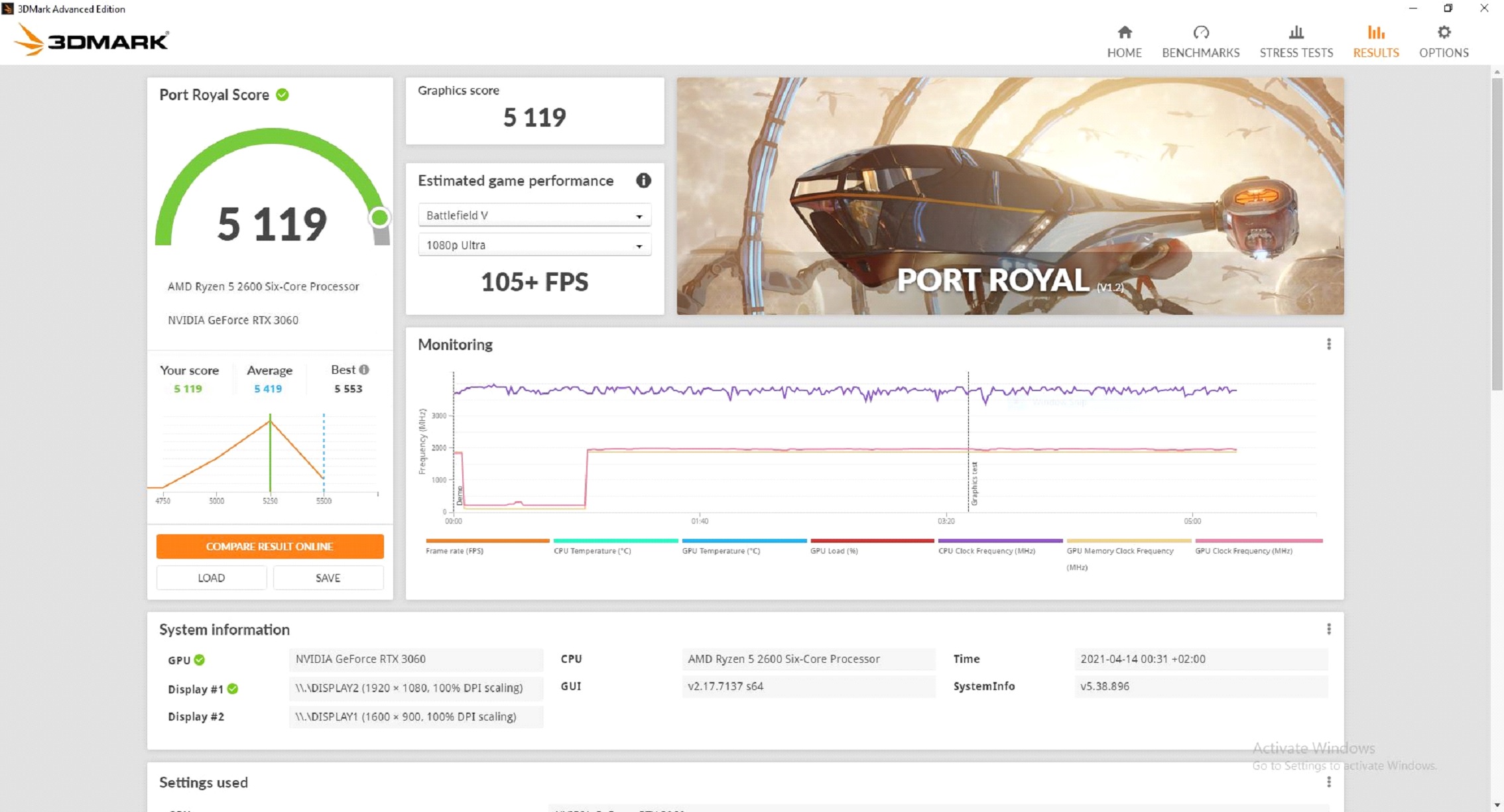 Again, this isn’t too shabby a score at 1080p which this card is aimed at. Lastly in 3D Mark, we tried the DLSS test with a higher output resolution of 2560 x 1440 which yielded the following score: 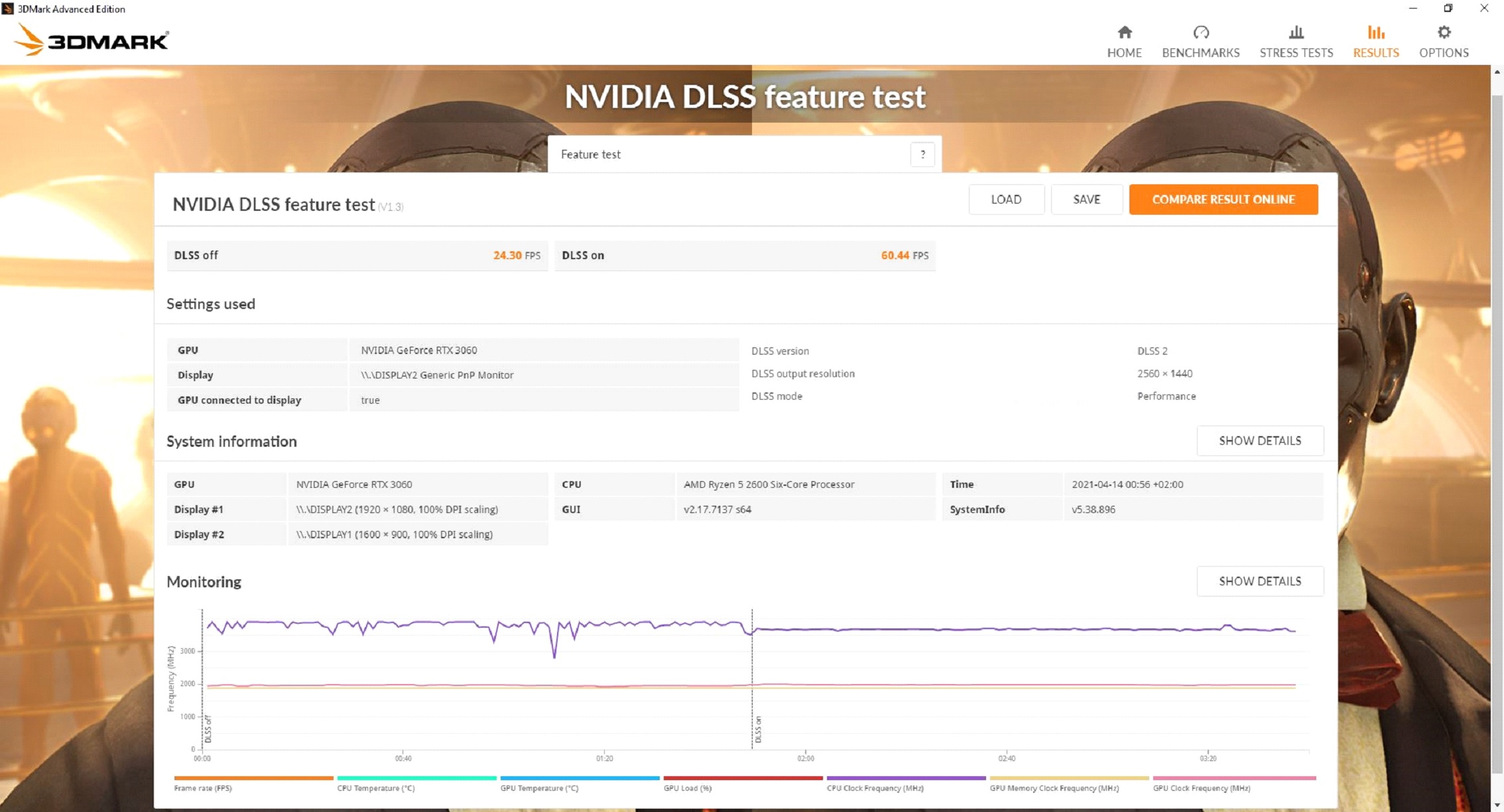 So what do all these scores above mean? For the average gamer who only has a 1080p 60hz monitor, it means that the RTX 3060 Vision OC from Gigabyte will run every modern game thrown at it without any real problems. Playing Control with every single setting maxed out and motion blur disabled resulted in more than 60FPS consistently. Enabling Vsync in the game’s settings capped the framerate at a stable 60FPS and it never dipped below this even during intense combat. What gamers should take note of however is the card’s Memory Type, Memory Bus and Memory Bandwidth. These being GDDR6, 192 bit and 360 GB/s respectively. Comparatively, the RTX 3070 Vision OC card has less GDDR6 memory since the RTX 3060 has 12GB but the Memory Bus and Memory Bandwidth are significantly higher on the RTX 3070 coming in at 256 bit and 4‎48 GB/s. So, what Gigabyte has tried to do here is to “Future-proof” the RTX 3060 somewhat by giving it more GDDR6 memory.

This works to a certain extent but if you can opt into purchasing an RTX 3070 Vision OC card, that would ultimately be a much better choice for “Future-proofing”. With that said though, Gigabyte also have an RTX 3060TI Vision OC which performs very similarly to their RTX 3070 Vision OC card. If you’re lucky enough to find any of these cards available and in-stock somewhere, best act fast because they’ll definitely sell out in no time flat.

To round off our testing, I ran the Watch Dogs: Legion benchmark and obtained the following result: 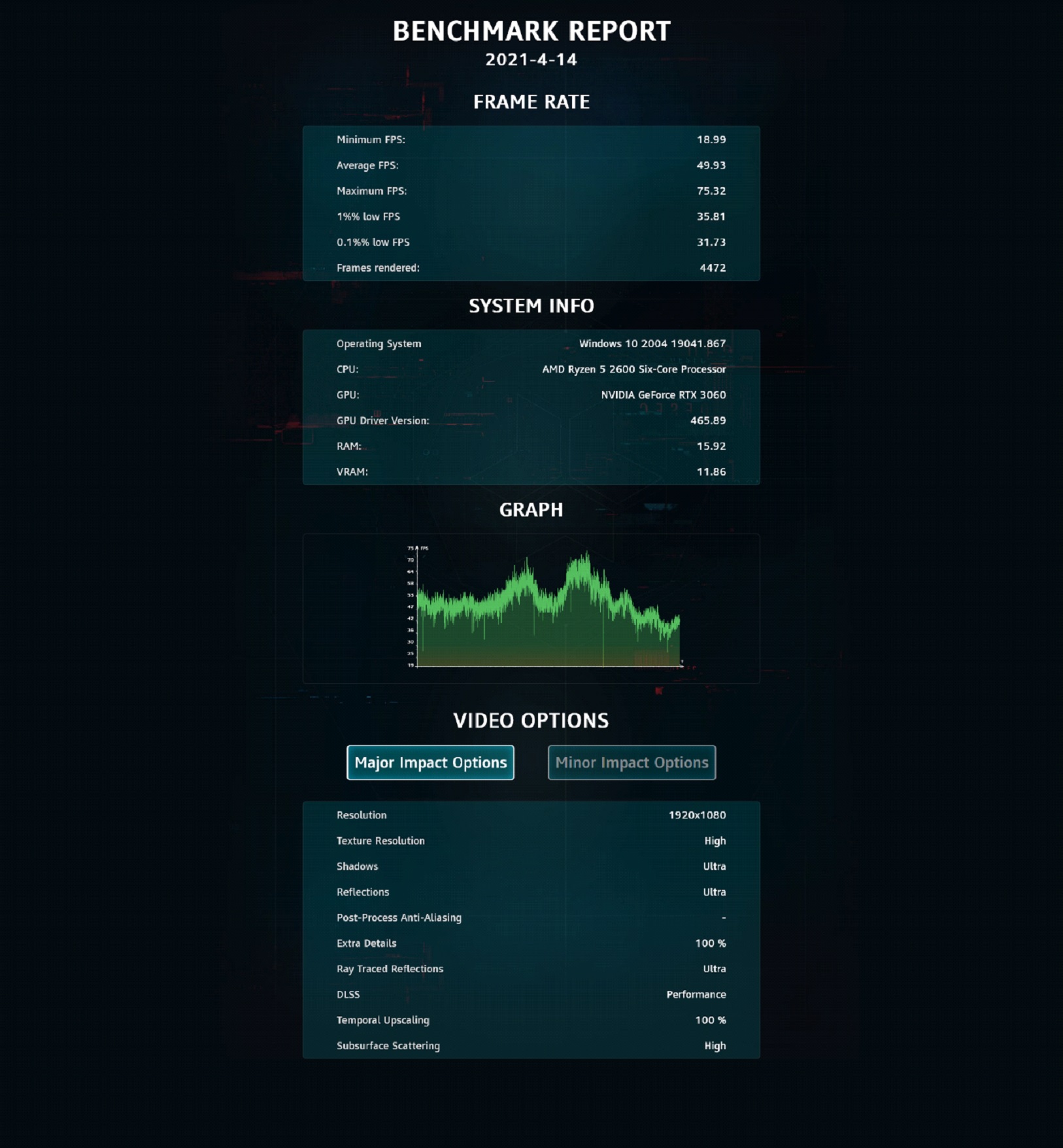 The Watch Dogs: Legion test yielded some really great information because every single setting was maxed out, with the exception of motion blur which was switched off, and the RTX 3060 vision OC still obtained a great score. In a real-life situation, players would most likely turn down a couple of settings such as shadows or “Extra Details” and would thus obtain much higher FPS counts when playing the game. This is a case where the extra GDDR6 memory comes in handy.

The RTX 3060 Vision OC from Gigabyte features 2 DisplayPort 1.4a ports and 2 HDMI 2.1 ports which is great if you have a multi-monitor setup or want to connect, say, a big screen TV to your desktop. The card has a surprisingly low power supply recommendation at only 550 watts so gamers who are still running 600 watt power supplies don’t need to upgrade yet another part of their system if they want to get this card. 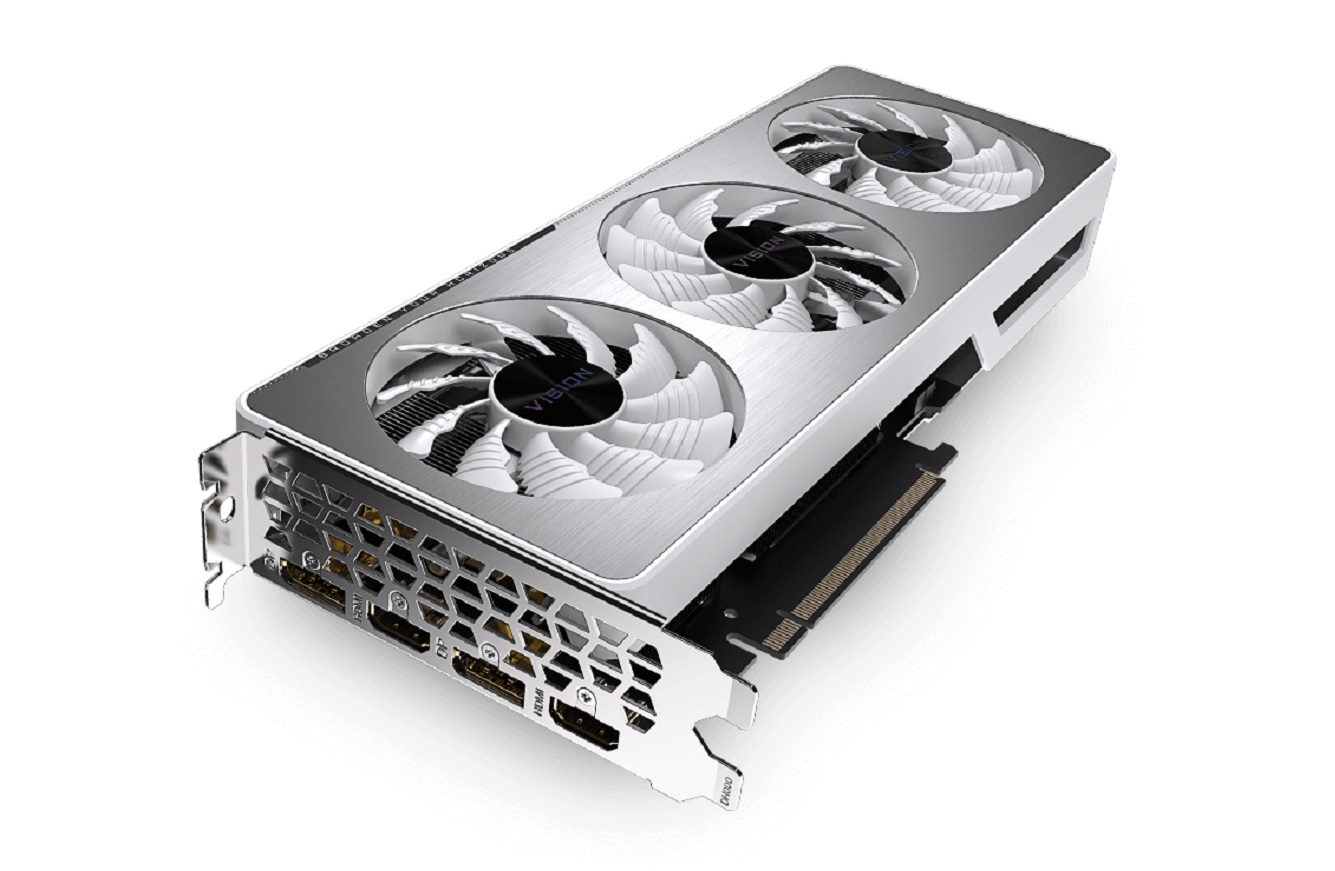 It should however be noted that, as with all the new RTX 30 series cards, if you aren’t running a newer generation CPU (2nd Generation Ryzen or 8th Generation Intel or above), your performance gains in games might be severely bottlenecked. Installing the RTX 3060 Vision OC into our test desktop was a breeze and the card even features a convenient LED near the power cable slot which indicates if there’s an issue with power when fully installed into a motherboard.

The RTX 3060 Vision OC didn’t heat up too much either during testing or gaming, sitting at a relatively low temperature of around 65 degrees Celsius. The fans do kick it up a notch when the card is under load but they aren’t offensively loud and are automatically disabled when the card is not being stressed too much. Kudos to Gigabyte here for creating an effective, and rather visually appealing, cooling system on this card. 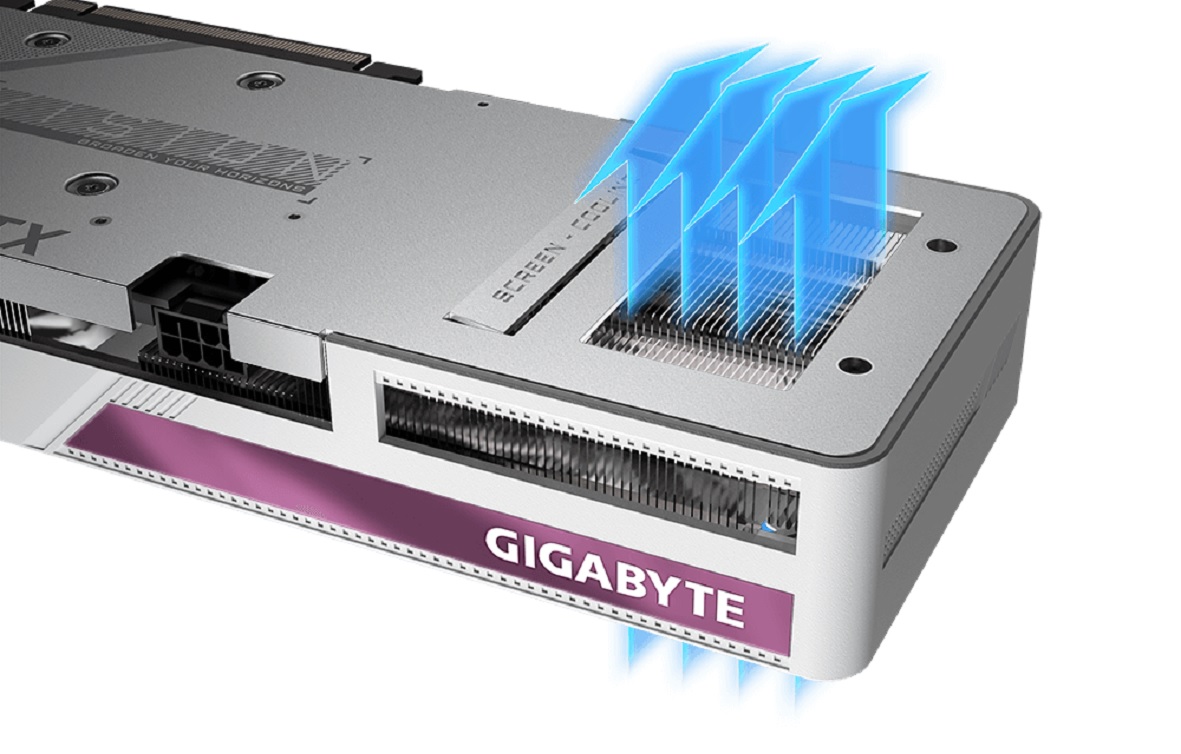 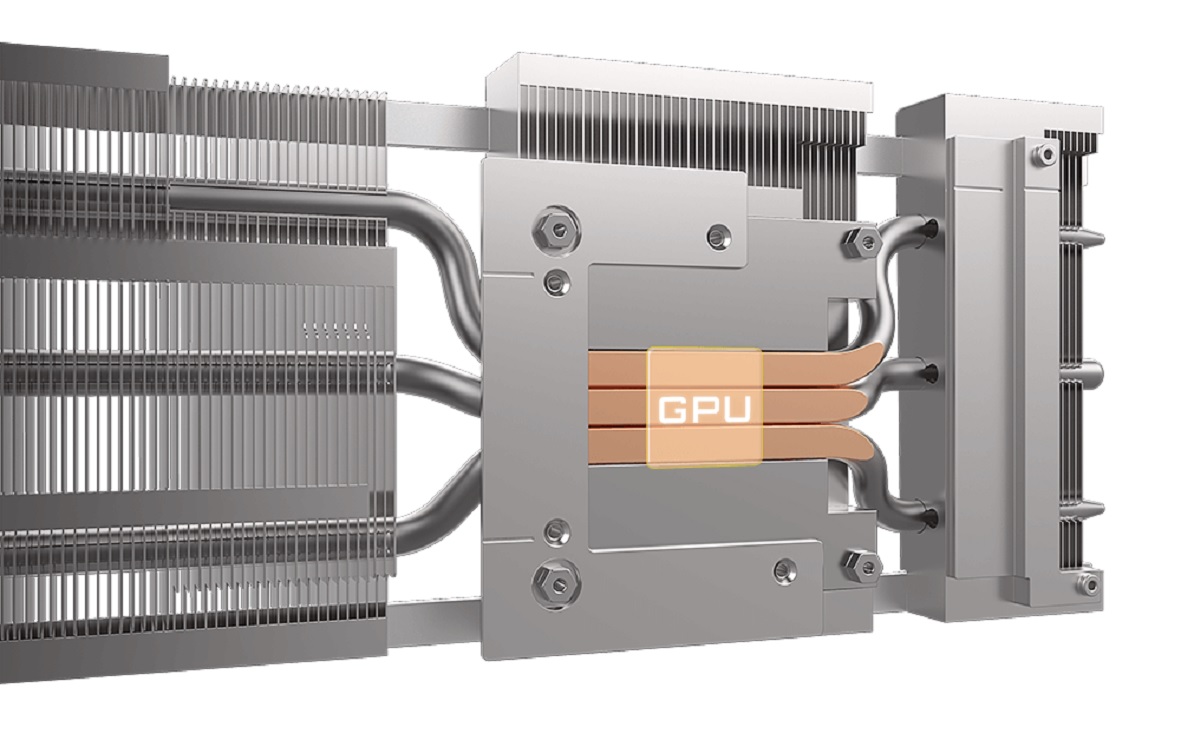 Overall, the RTX 3060 Vision OC from Gigabyte is a graphics card that is well worth the investment if you are somehow able to beat scalpers and other gamers who are foaming at the mouth to get their hands on an RTX 30 series card. With pricing currently fluctuating so much, this “Entry-level” (And I use that description extremely lightly) card is definitely not a slouch and shouldn’t be overlooked if it’s available.

There’s a lot of power backing it and it will run your games and other graphics intensive programs with no muss or fuss for sure. We highly recommend it, especially if you’re upgrading from say, a GTX 1060 or something similar. The only downside we have to mention is that the pricing is volatile and you may want to opt for an RTX 3060TI or RTX 3070 instead due to the memory bus and memory bandwidth being better on the latter cards.

Price is extremely volatile and subject to change frequently