Something wicked this way comes. 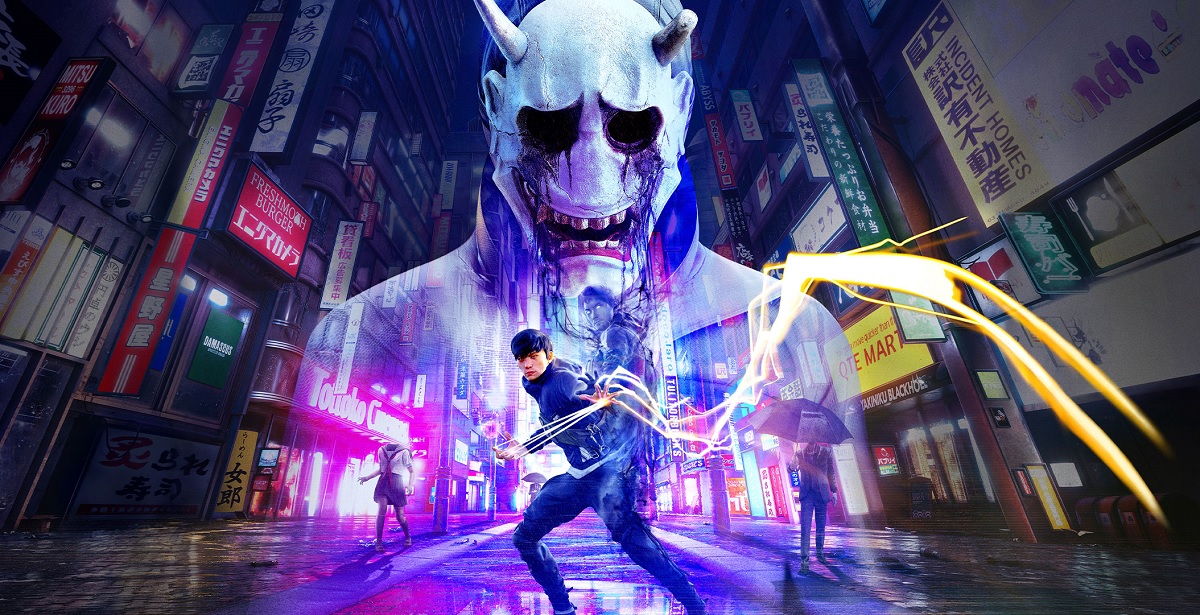 Back in 2014, Shinji Mikami released The Evil Within under his newly formed studio Tango Gameworks - an excellent survival horror experience that managed to lean into his signature style while also experimenting with new ideas. Tango Gameworks would continue experimenting with The Evil Within 2, and now, they've released their most experimental game yet in Ghostwire: Tokyo; a game brimming with original ideas slightly held back by its uninspired open-world structure. 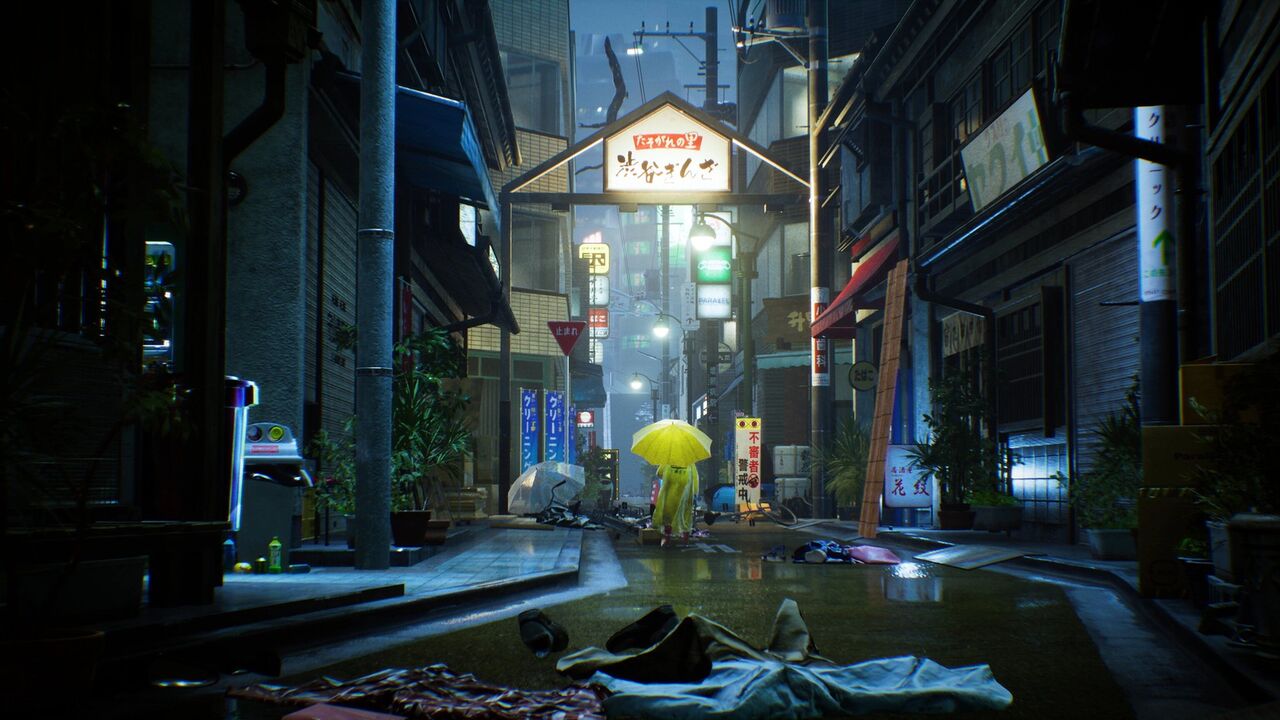 Ghostwire: Tokyo takes place in Shibuya in the aftermath of a strange occurrence where the area's inhabitants have all disappeared and been replaced with malevolent spirits called yokai who now roam the world. It's up to protagonist Akito and his spectral comrade KK to put an end to the bizarre scourge affecting the land, and uncover the mystery behind the mysterious Hannya-masked villains.

I won't be discussing Ghostwire: Tokyo's story in any detail as there are some pretty great twists and turns that the narrative takes, but what makes it stand out and keep players hooked is Akito himself. Coming off as a bit one-dimensional at first, he slowly blooms into a charismatic main character that you can get behind. His interactions with KK are also well-written and do wonders in fleshing out both these unassuming allies as compelling figures in a haunted world. 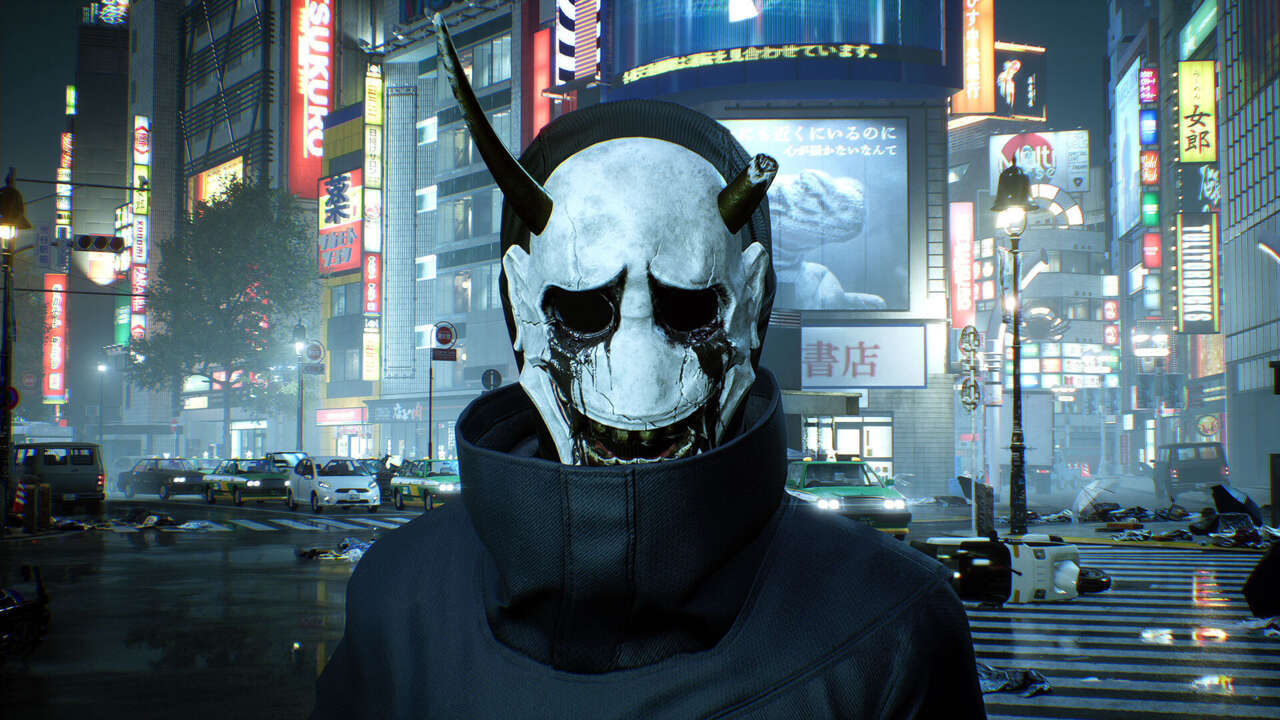 At the heart of Ghostwire: Tokyo is its unique gameplay. From a first-person perspective, players harness a wide range of magical abilities to annihilate and dispel roaming yokai who inhabit every dark corner of Shibuya. Akito comes equipped with a bow too, meaning combat is flexible enough to experiment with its various styles, from full-on melee assaults to stealthy approaches.

The goal in each battle is to expose the core of a yokai before executing a stunning Ethereal Weave that pulls their core out of their chest.

In terms of offensive capabilities, the magical variety of spells is awesome, engaging and very stylish. The goal in each battle is to expose the core of a yokai before executing a stunning Ethereal Weave that pulls their core out of their chest, dispelling them instantly. You have to creatively break down a yokai's body and expose their core using these spells, ranging from large AoE fireballs, shock waves and my personal favourite, the ever reliable "finger gun" technique. 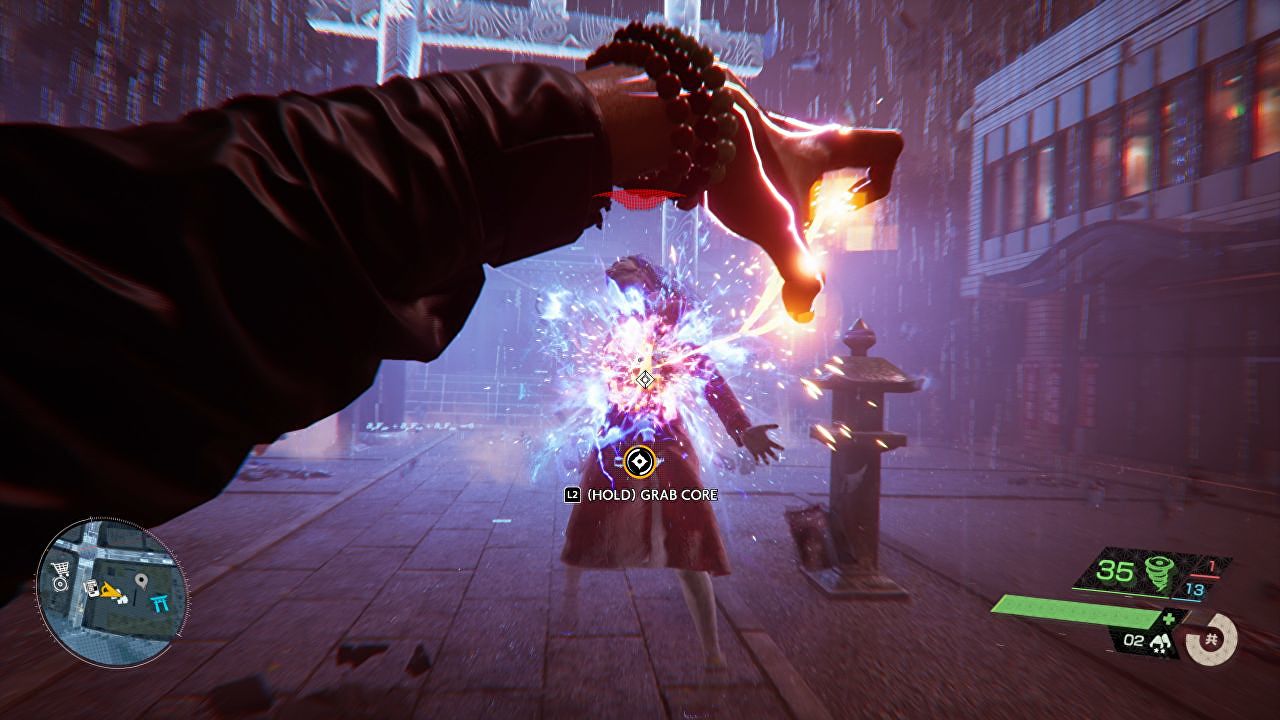 Each spell is a blast to use and feels amazing thanks to solid DualSense implementation, but you'll quickly realise that Ghostwire: Tokyo doesn't have much variety outside of these abilities. You don't exactly earn "new" abilities as the game progresses outside of buffing skills through an upgrade tree, meaning tedium can set in quickly. It's a game that's best enjoyed in short bursts, but this is unfortunately not what you'd want to hear for an open-world game that begs to be explored.

Tango Gameworks excels at creating palpable and terrifying atmospheres, and while Ghostwire: Tokyo isn't nearly as horror-focused as The Evil Within, it presents a chilling haunted world with effectively creepy moments sprinkled throughout. That said, this is where the similarities stop. The developers clearly shifted their attention to making Ghostwire: Tokyo more action-packed and it works. There are elements of horror and most of its premise rests on the horror of Japanese folklore, but it flows more like a traditional first-person shooter packed with action sequences and fast-paced gameplay. Don't go into Ghostwire: Tokyo expecting a traditional horror experience, because it really isn't trying to be one. 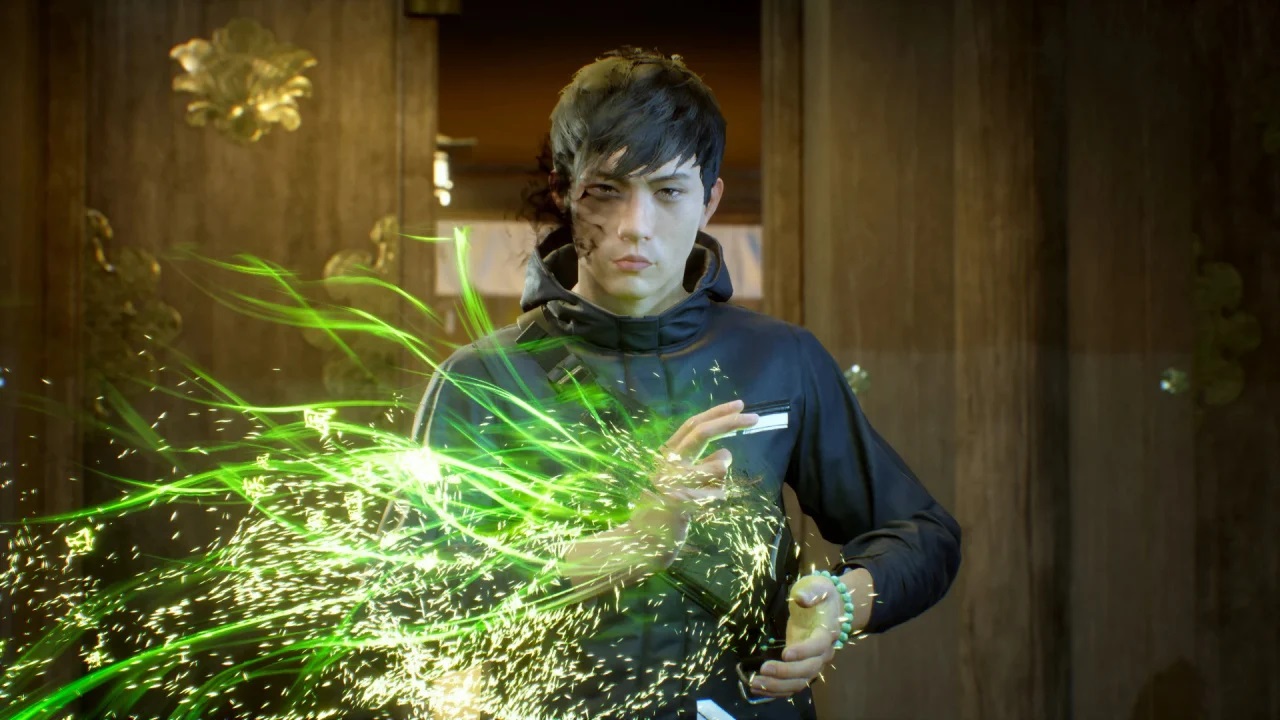 Exploring Shibuya is broken down into a routine open-world exploration structure. Torii Gates need to be cleansed in order to unlock more sections of the map as most of it is constantly masked by a fog. If you've ever played a Ubisoft game, you'll know exactly how this song and dance works. However, Tango adds a unique approach to this by hiding the Torii Gates in some crafty locations, including traversing rooftops by using a Tengu spirit to propel yourself into the air. It's fun gliding around Shibuya's rooftops and finding collectibles, but even that fun has a limit.

As someone who enjoys urban legends, it was exciting encountering the batch of Japanese folkloric creatures that Tango cooked up for Ghostwire: Tokyo.

To keep the momentum evenly balanced, exploration is broken up by yokai encounters, and they're quite varied. These can range from simple school children and businessmen to figures based on popular mythological Japanese figures like Hachishakusama and more (that I won't spoil). As someone who enjoys urban legends, it was exciting encountering the batch of Japanese folkloric creatures that Tango cooked up for Ghostwire: Tokyo. It's the key that separates it from the batch of familiarly structured open-world games, keeping players hooked by the thrill of what comes next. 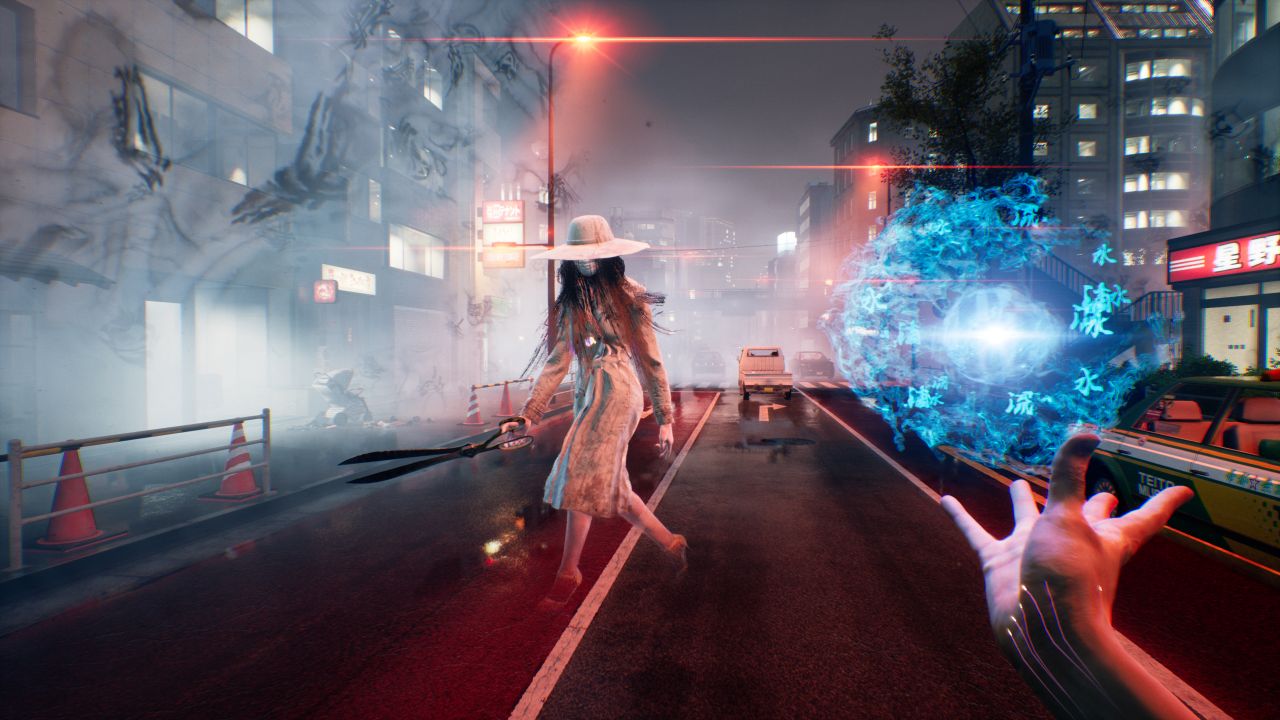 In between fighting yokai and unlocking Torii Gates, you'll be on the hunt for various items and collectibles scattered throughout Shibuya. Crystalized Ether regenerates your ammo for spells, while Katashiro paper dolls trap wandering souls in them so you can exchange them for Meika (the game's currency) and XP to level up your skills. You can also pet dogs, but they play a more important role as they can often guide you to hidden treasures and items.

The upgrade tree is especially robust in Ghostwire: Tokyo, catering to a surprising amount of playstyles. You can pour points into stealth, essentially turning Akito into a ninja that is harder to detect and moves faster while crouching. Stealth and its various off-shoots also improve your bow-drawing speed and efficiency. Meanwhile, more offensive-based skill trees enhance your spells and their effectiveness, enlarging the range of AoE attacks and the damage output of other spells. I went for a hybrid style that allowed me to switch between stealth and all-out attacks, but I can see others leaning to one side for a better overall build. 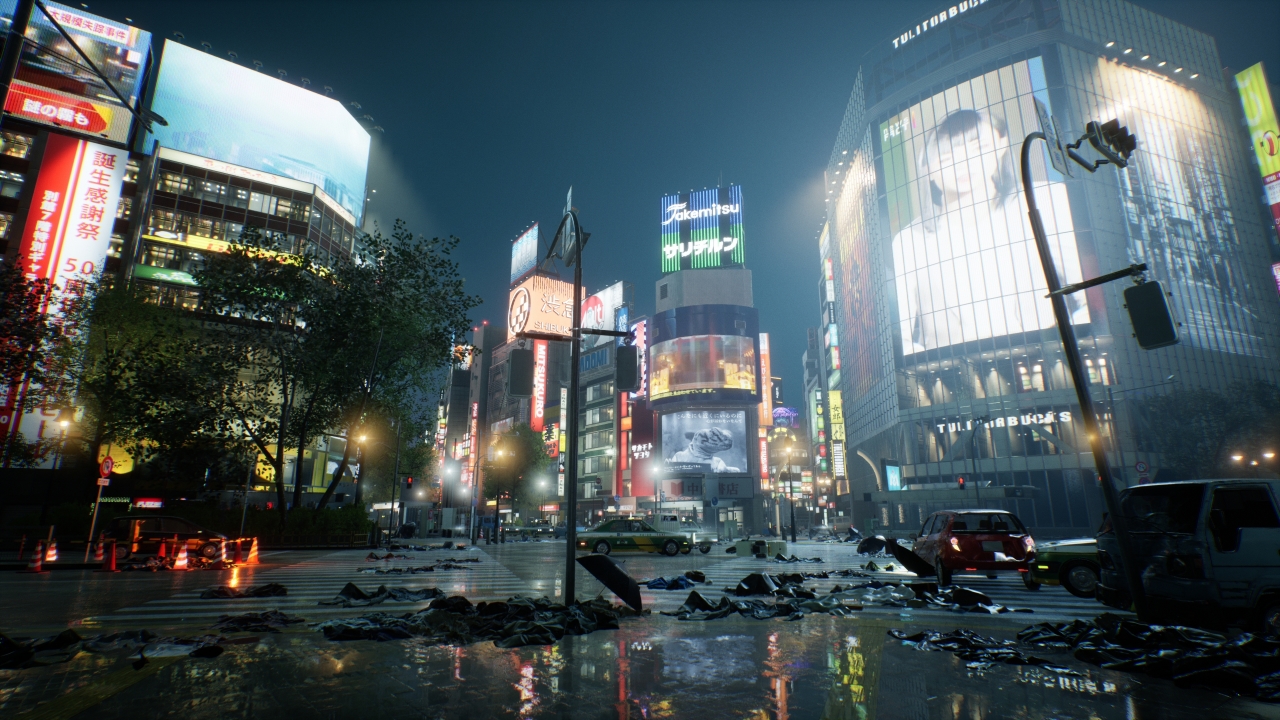 For as fun as Ghostwire: Tokyo is in short doses, there's a lack of compelling side objectives and activities to keep you thoroughly hooked. More often than not, side tasks boil down to simple fetch quests or item hunts that tend to feel like you're just ticking off a checklist. Worst of all, it just feels tedious once you've cleansed so many souls or scoured so many locations. It becomes unnecessarily bloated after a while, especially if you just want to keep the story moving forward but desperately need to build up XP which requires going off the beaten path. For the few moments where side content does feel meaningful, it's too short-lived to leave an impact.

It's grim, dark and almost dream-like at times, turning Shibuya into a feverish nightmare.

Visually, Ghostwire: Tokyo excels thanks to stunning art direction and a unique vibe that's never been seen or felt before in a game. It's grim, dark and almost dream-like at times, turning Shibuya into a feverish nightmare. Despite areas that begin to feel the same after a while, that sense of uncertainty and dread kept me engaged and going. The awesome soundtrack, which bounces between ominous and eerie to techno-thumping, deserves a special mention too. 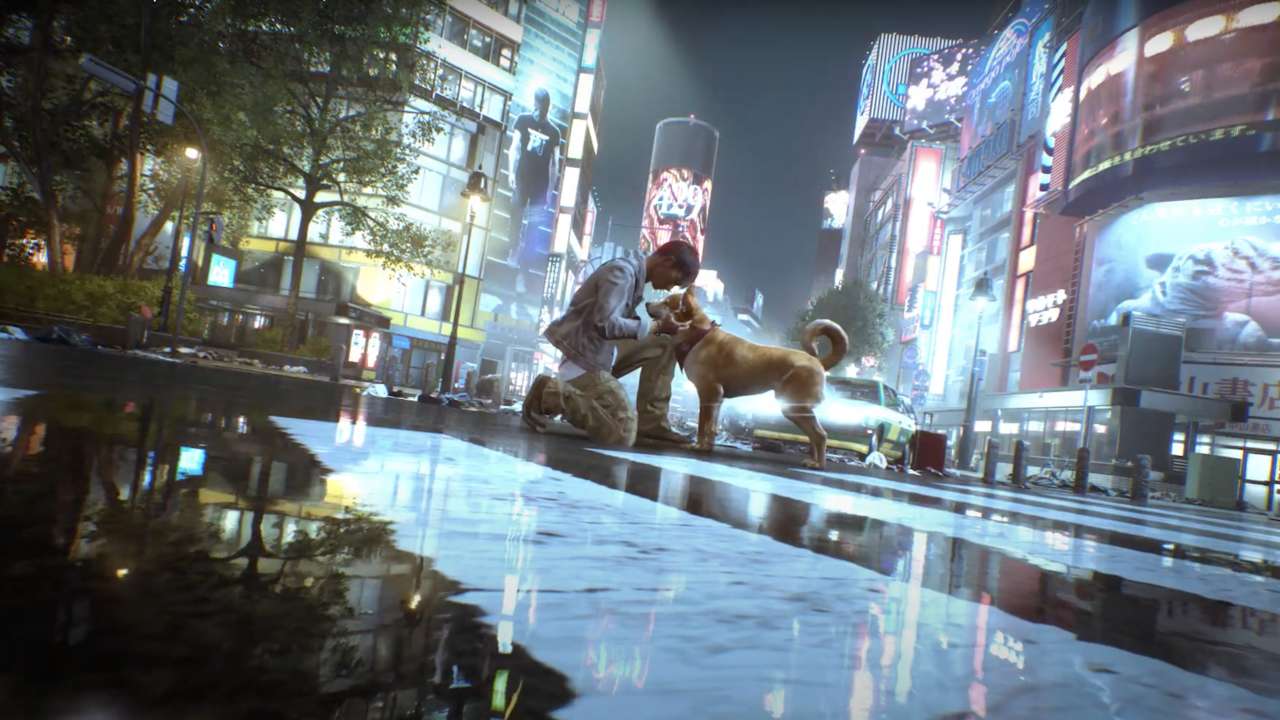 On a technical level, Tango Gameworks fine-tunes Ghostwire: Tokyo and it runs fairly smoothly on PS5. I rarely encountered any notable framerate drops, despite the explosion of wonderful particle effects constantly barraging the screen during combat. Couple this with excellent DualSense features that make each spell cast feel snappy and responsive on the adaptive triggers, and you got yourself an immersive and technically sound horror adventure.

Ghostwire: Tokyo was one of my most anticipated games of 2022, and for the most part, it lived up to my expectations. Tango Gameworks deliver a highly original concept with an eerie setting, well-written main characters in KK and Akito and spell-based gameplay that bursts with vibrant colours and energy. Sadly, the open-world padding, tedious sandbox and repetitive side objectives hold it back from being masterful. Even with that in mind, I can still call Ghostwire: Tokyo a special experience that comes around once in a blue moon.

Side quests are dull

Coffeboy
such a great game! enjoying it.. 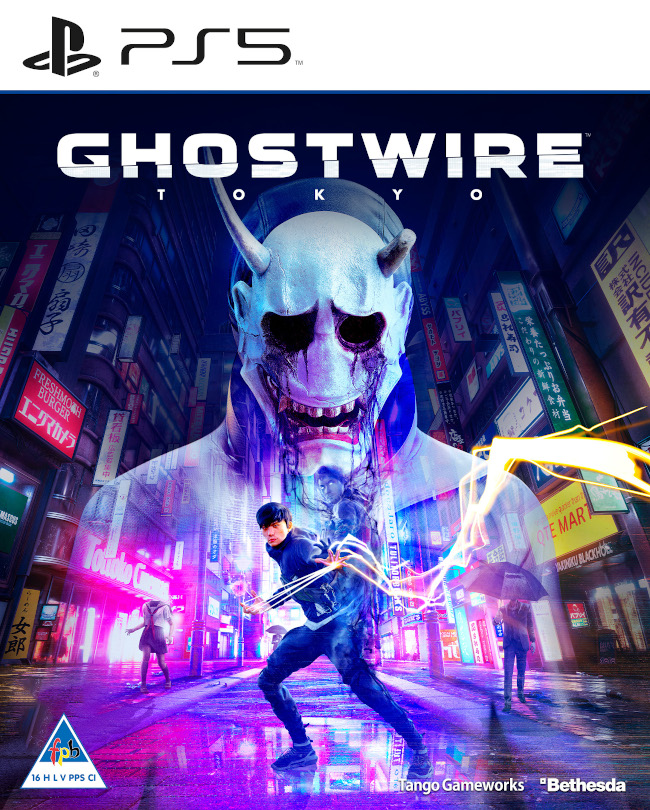