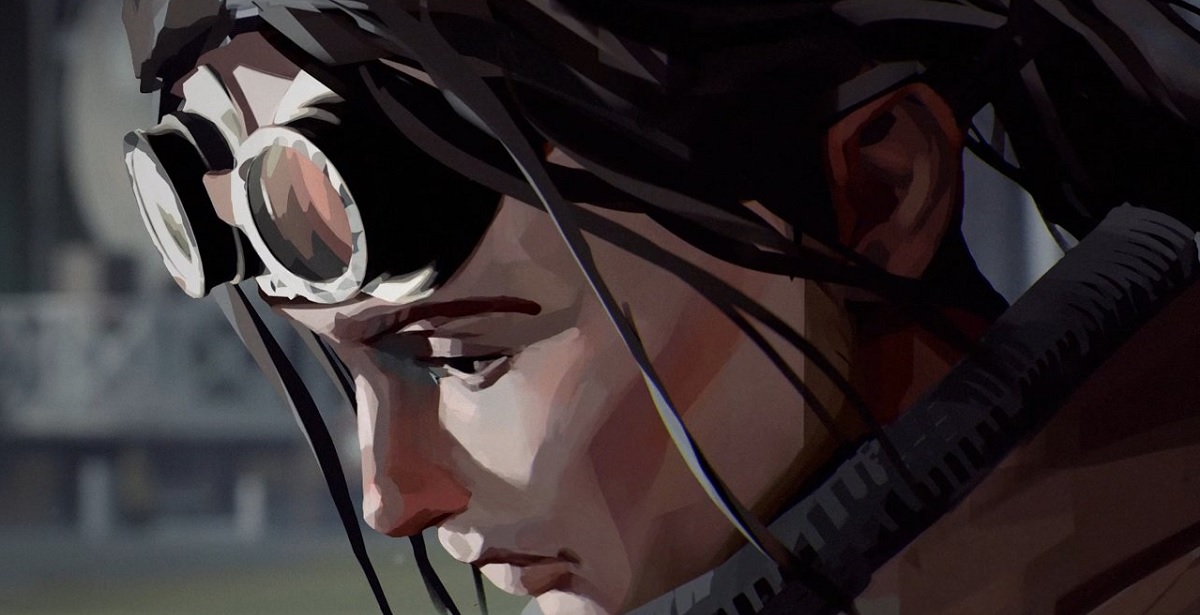 Picture yourself in the middle of the arctic with nothing but your winter gear and your last few rations of food. The cold nights and frigid days chill to the bone. Weeks pass as you struggle on with your family and colleagues in tow. All hope for survival in the weather’s icy grip begins to dwindle. Darkness closes in. Then, you find a beacon of light, a welcome reprieve in the form of a shielded valley where you can set up camp. Spirits are high and life seems livable again. This is the premise behind Frostpunk.

We’ve previously reviewed the base game and you can read more about that here. 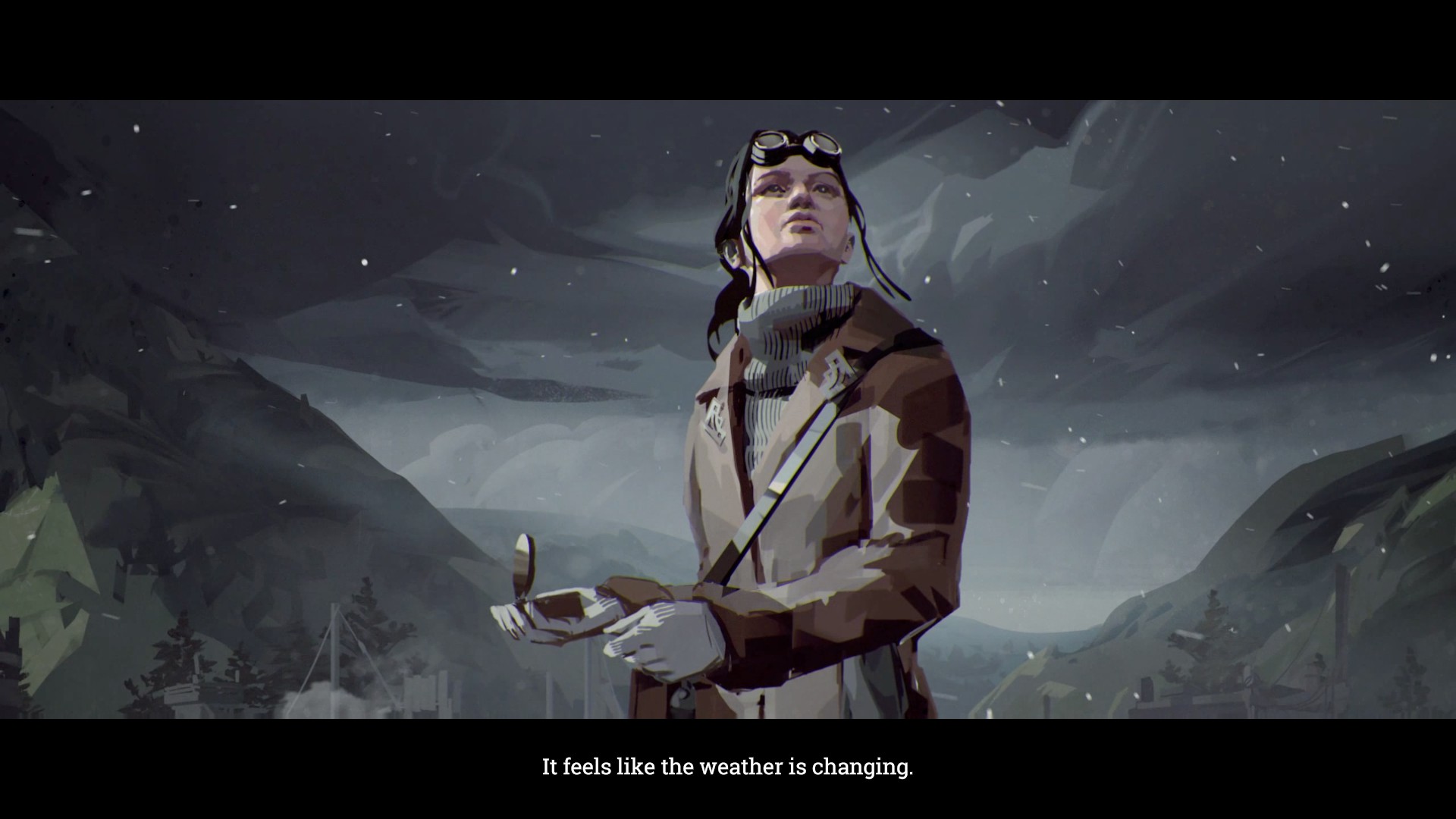 Frostpunk has been a labour of love from 11 Bit Studios, with a tonne of post launch content having been released over the past 2 years. Frostpunk is a real-time strategy game based on the harsh realities of survival. It’s gripping to say the least, and while featuring city building elements throughout, it tells a deeper overarching story that will keep you captivated for hours on end. The Last Autumn DLC is very much the same as the base game with some slight modifications which help it excel in a different way.

In The Last Autumn you will assume the role of the commander or captain of an expedition to Site 113. You’ll set up a Victorian era steampunk “city” of sorts at site 113 and will have set objectives put in place for you to fulfill. These objectives revolve around the construction of the generator - The mechanical marvel of the base game that is the heart of your camp. 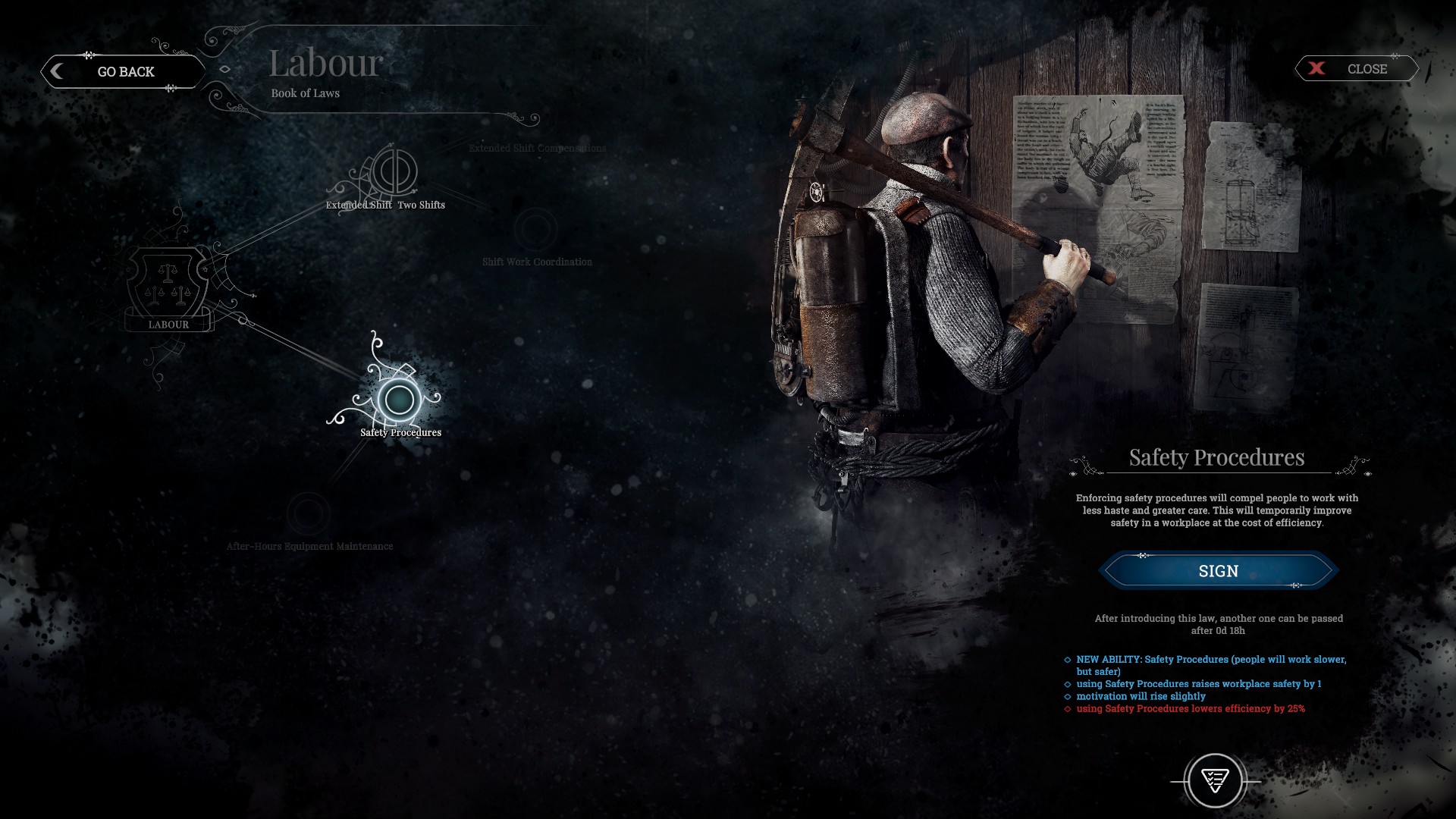 As a prequel DLC, The Last Autumn exposes you to more of the deep lore behind Frostpunk’s base game. Players will still have to build a lot of familiar buildings such as sawmills and resource outposts but with the additional task of constructing the generator from scratch. Resource management is the key to surviving in the harsh conditions but there’s less emphasis on the cold temperatures at first and more on managing the tensions in the camp.

With resources being scarce, players will have to construct docks to receive shipments from England.

The looming temperature problems are not as intense as in the base game but later in The Last Autumn DLC they will be. The DLC’s focus on the earlier establishment of the generator is where most of the enjoyment is to be had. With resources being scarce, players will have to construct docks to receive shipments from England. Gathering resources is primarily dependent on receiving shipments of raw material or from collecting the raw material from your environment. The environment though has a limited supply so soon enough you’ll be at the mercy of waiting for ships to arrive with precious cargo. 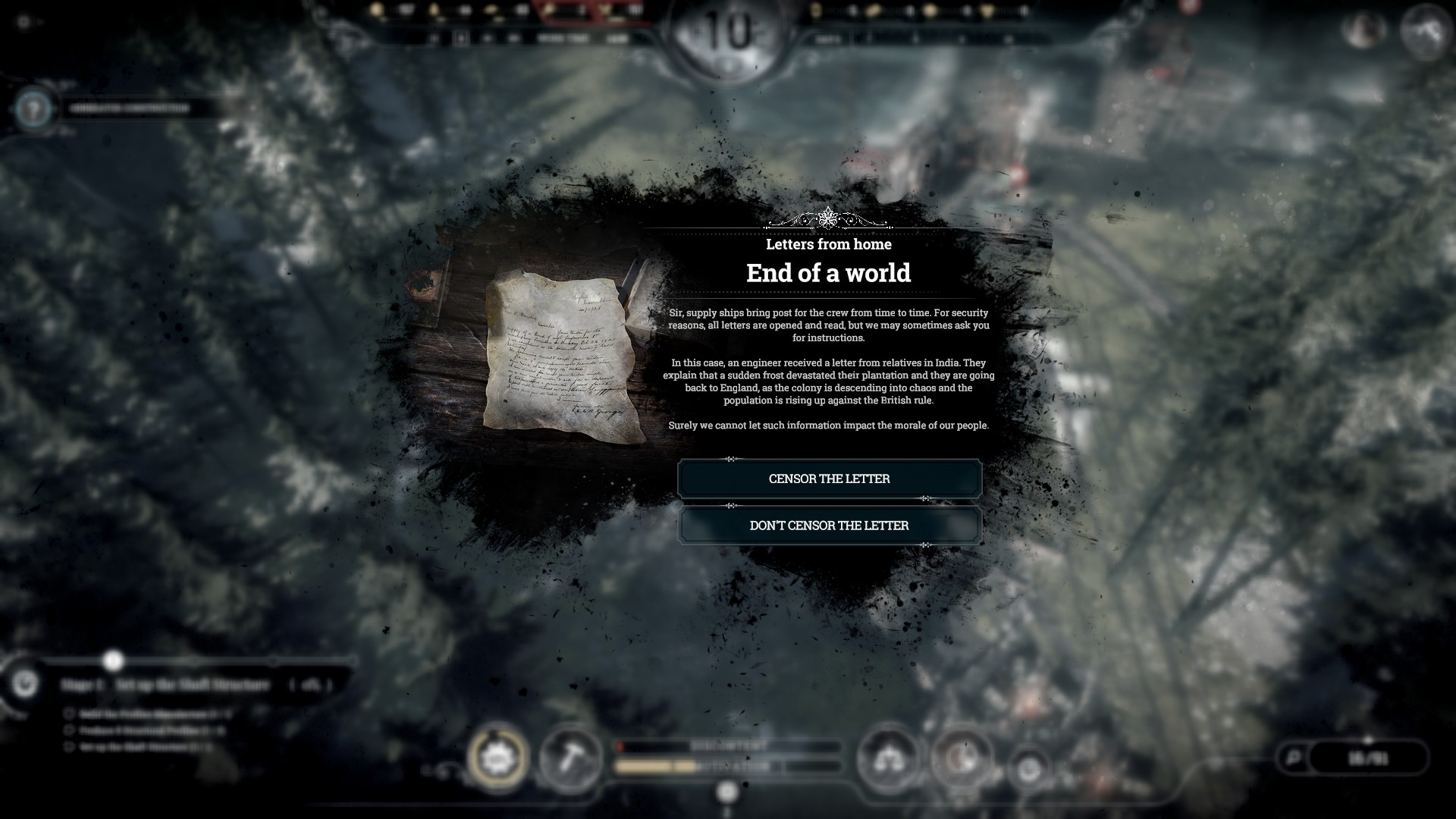 Players will have to maintain the socio-political aspects of their encampment too with The Last Autumn DLC featuring tension between the workers and the engineers involved with building the generator. In the first 2 hours or so of the DLC, there’ll be plenty of mishaps at the work site and players will have to pass laws to ensure that the workers are happy while also satisfying the engineers. Safety is also a priority with problems such as explosions, toxic gas clouds and worker strikes cropping up over time.

Specific resources may run out and acquiring more in the harsh environment requires time.

As with the base game, the city-building aspects are easy to grasp, but The Last Autumn is unforgiving in terms of its survival learning curve. If you as the leader just set out to build willy-nilly and don’t plan ahead for the generator’s completion, you will suffer. Specific resources may run out and acquiring more in the harsh environment requires time. The game does guide you towards maintaining self-sufficiency but if players don’t heed warnings or fail to commit to researching better technologies, progress will come to a standstill. Fall behind schedule enough on the generator’s completion and you’ll be sent packing and it’s game over for you. 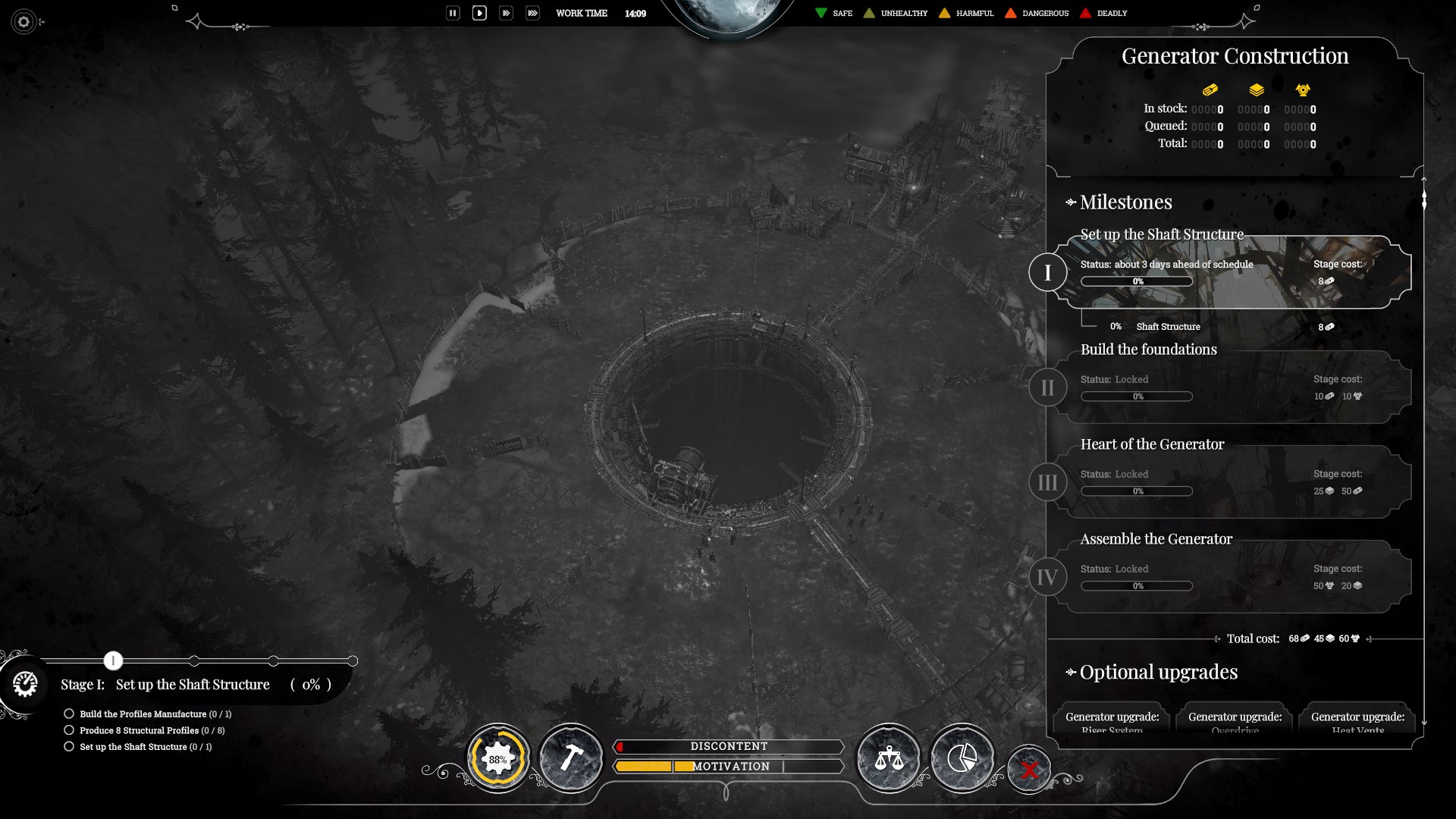 Most of the base game’s familiar UI is still available in The Last Autumn as you will need to monitor your city’s heat levels, the current temperature of the environment, your current resource stockpile and your citizen’s overall mental state. Furthermore a thermal spectrum view can be toggled on or off to show you exactly where the frost bites the hardest in your city. Players will need to make use of this view to ensure that their citizens can remain warm as they improve their heating technologies later on in the DLC.

Much like in the base game, it’s through these scouts that a lot of The Last Autumn’s story is told.

Players will be able to scout the world at large by using Foragers. Foragers serve as The Last Autumn’s scouts and can venture out into the frozen wasteland in search of survivors, stragglers and remnants of human civilization. Much like in the base game, it’s through these scouts that a lot of The Last Autumn’s story is told. They will find sources of food as well as survivors and various other things as they explore. The Last Autumn still makes use of a graphic novel style of storytelling with reports and story text often placed against a backdrop of pure stylized visual eye candy. This paints the bleak tale of survival and players will feel a sense of impending doom as they learn more about the current state of the world. 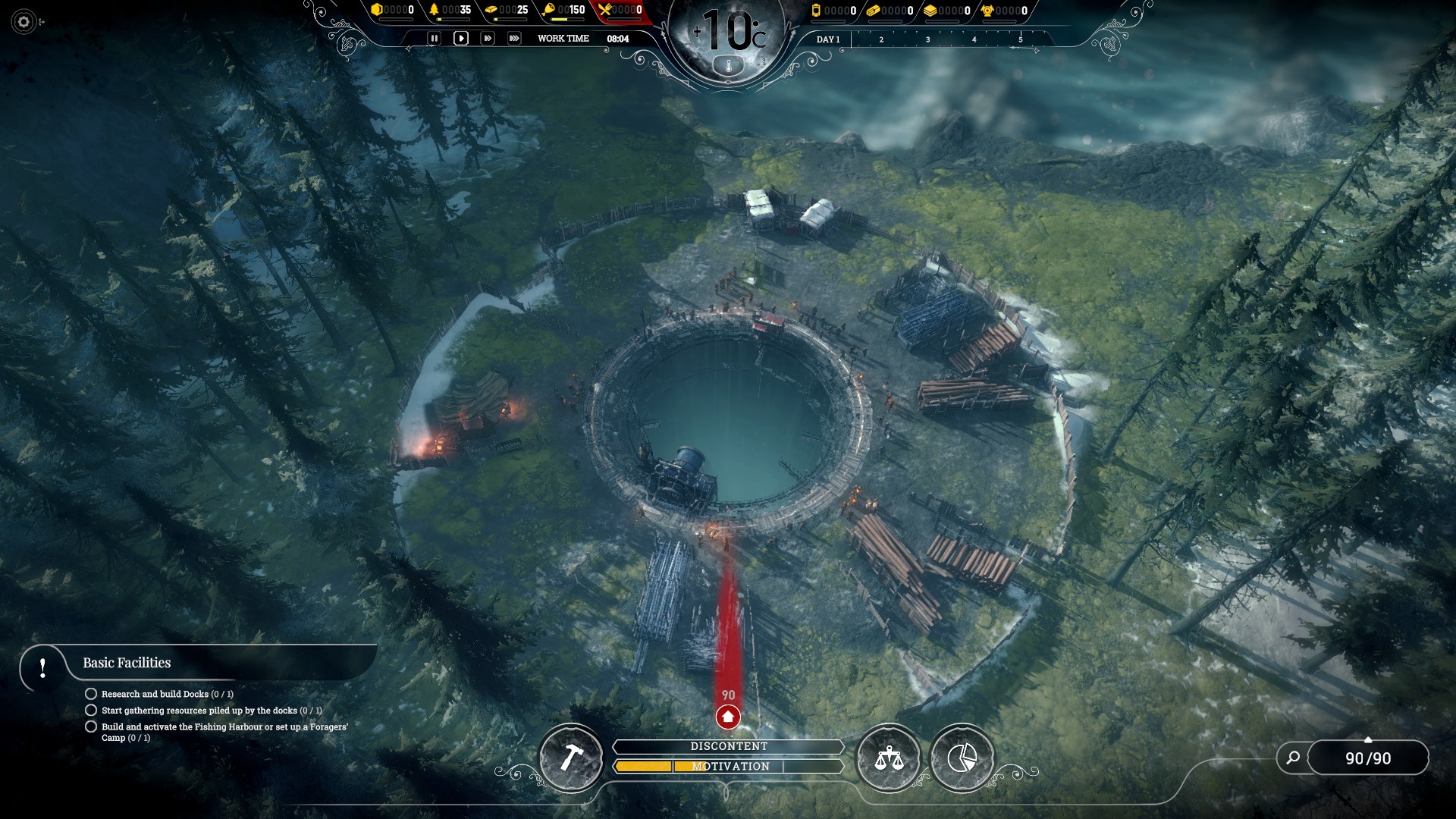 The story at the camp also involves a level of complexity built up around your laws. Laws focused on adaptation to the working conditions involve making tough decisions such as signing shorter working hours into effect to keep workers happy while risking generator completion progress. The decisions you make have an effect on overall motivation and discontent in your city and players will have to strike a balance or it’s game over for them.

11 Bit Studios still have a knack for storytelling and The Last Autumn’s story draws you further in with each decision you make as each day passes. The game becomes increasingly complex over time and veterans of Frostpunk will find hours and hours of enjoyment here. Graphically, the game is still as gorgeous as ever with the greenery of The Last Autumn contrasting the icy visuals of the base game.

The Last Autumn is a great addition to Frostpunk and is easily one of 2020’s best DLC already. It expands upon the base game with a different take on city-building, micro-management and storytelling while focusing on some really tough moral and ethical dilemmas. As the autumn leaves fall, the intensity is ramped up and surviving becomes truly challenging. If you haven’t played Frostpunk before, jumping straight into The Last Autumn might be quite a challenge but it’s one that’s not impossible to overcome. This DLC is clearly meant for veterans but the rewarding sense of survival against all odds will keep you coming back for more until you complete it.

If you already own Frostpunk or are considering buying it, The Last Autumn is a DLC you definitely should consider picking up with the game.
9

Expands on the Frostpunk lore

A different take on the original gameplay formula

Zombia
@Lurch
Good luck! Also what Magius said above is true. Be prepared for a cold, heartless winter...

Magius
@Lurch be prepared for some of the most difficult and ultimately depressing decisions you ever have to make. Played the base game on launch and having to decide between food, heat, and shelter for your settlers is bloody difficult. Then watching some die because of the decisions you made...

Lurch
Just downloaded the base game on Xbox Game Pass so looking froward to giving it, and maybe the expansion a bash.