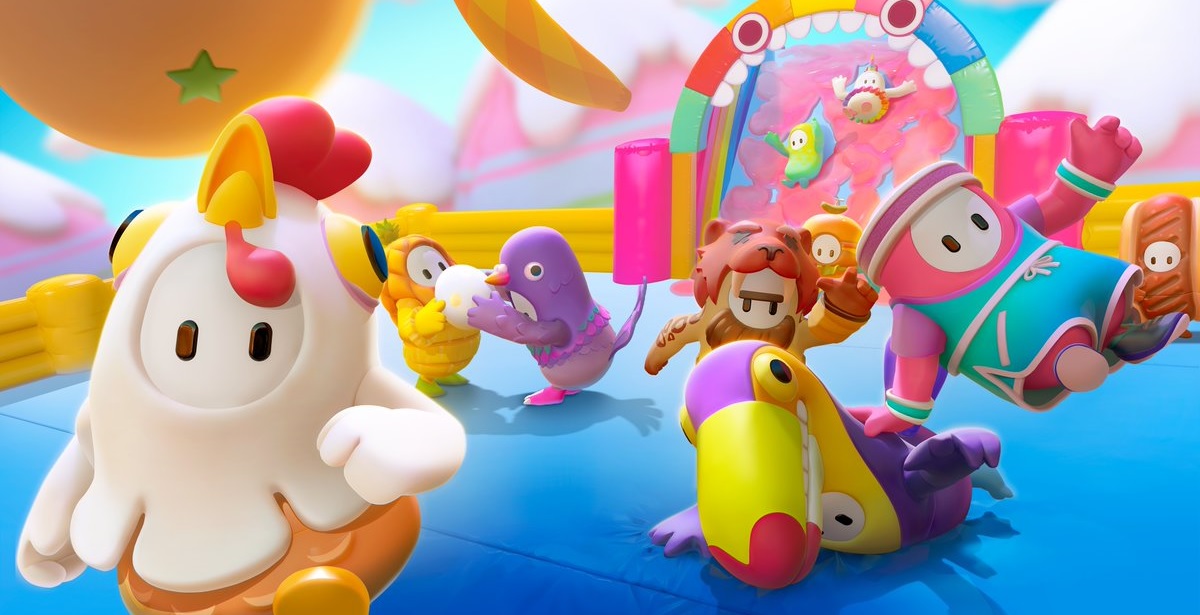 Between 1986 and 1990, Japan ran a knockout-style competitive game show called Takeshi's Castle. This oddball series involved dozens of confused contestants partaking in grueling challenges that were as wildly creative as they were utterly chaotic and nonsensical at times. I bring this up because Takeshi's Castle would go on to inspire a wave of similar popular television shows around the world that we know today - but never a successful video game. This is where Fall Guys: Ultimate Knockout comes in, taking the tired battle royale formula and mashing it with Takeshi's Castle's distinct flavour to create one of the most rewarding and entertaining games of 2020. 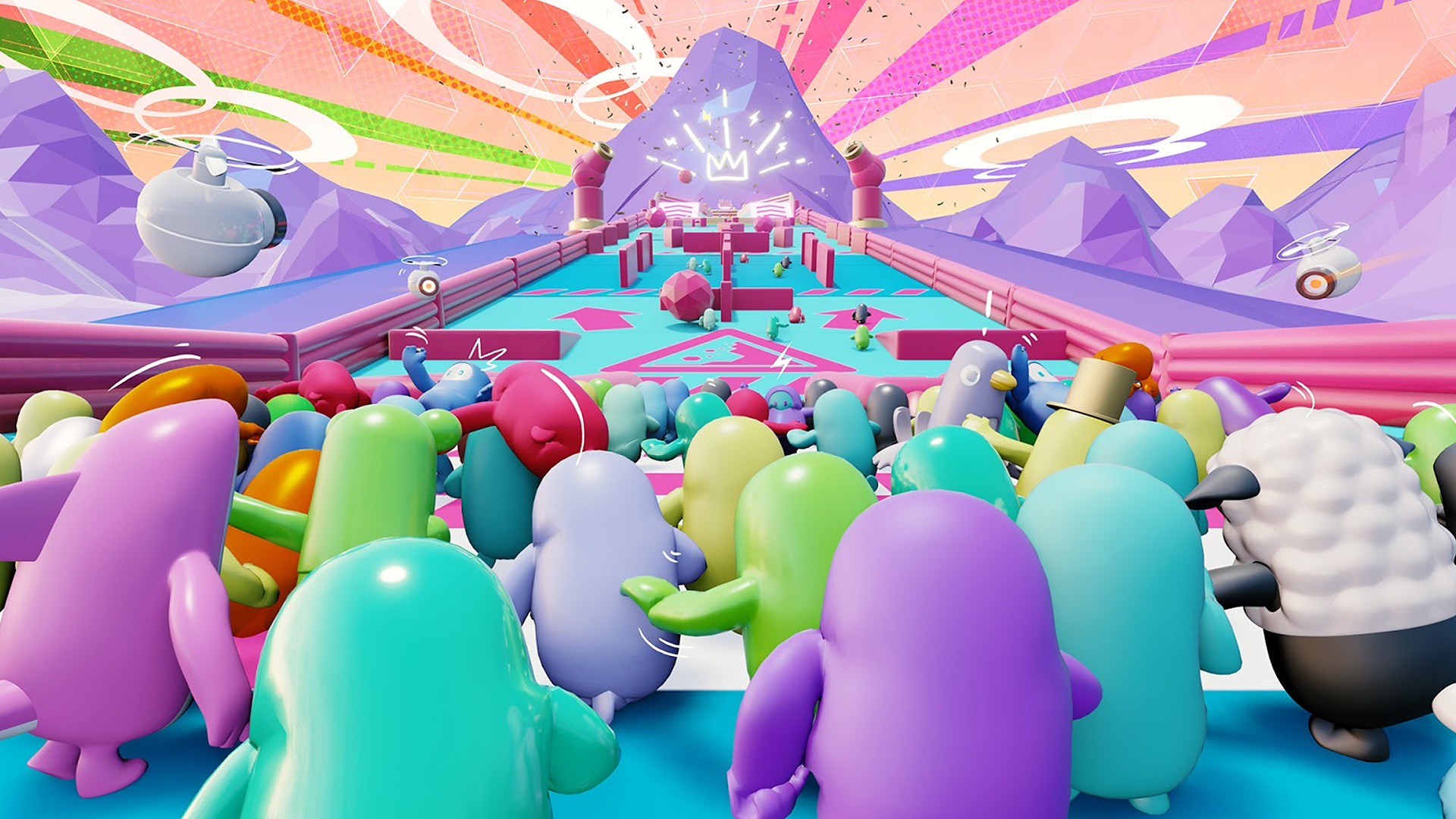 Fall Guys: Ultimate Knockout, from developer Mediatonic, is classified as a "battle royale", but certainly doesn't share any DNA with the likes of PUBG and Fortnite. Instead, it carves its own path by turning the gameplay loop from PvP to PvE. Dozens of players - assuming the identities of colourful jelly beans - are loaded on a variety of obstacle courses with qualifying and elimination goals. With over 20 courses (at least as far as I could count), each with their own objectives, hazards, and limitations, players must duke it out to become the last man standing.

Fall Guys is a knee-jerk response to the market while also being an unique battle royale sugarcoated with the high-energy novelty of a crazy Japanese game show...

If it all sounds far too simple, that's because it is. Fall Guys prides itself on this simple, yet highly addictive, gameplay loop, bolstered by a colourful visual palette that keeps the screen vibrant and constantly exploding with colours like a trip in Fear and Loathing in Las Vegas. Developer Mediatonic looked at the current state of the battle royale genre, featuring dozens of competitors per year, and decided to trim the fat and inject a new style into the mix. Fall Guys is a knee-jerk response to the market while also being an unique battle royale sugarcoated with the high-energy novelty of a crazy Japanese game show - and for the most part, it really works. 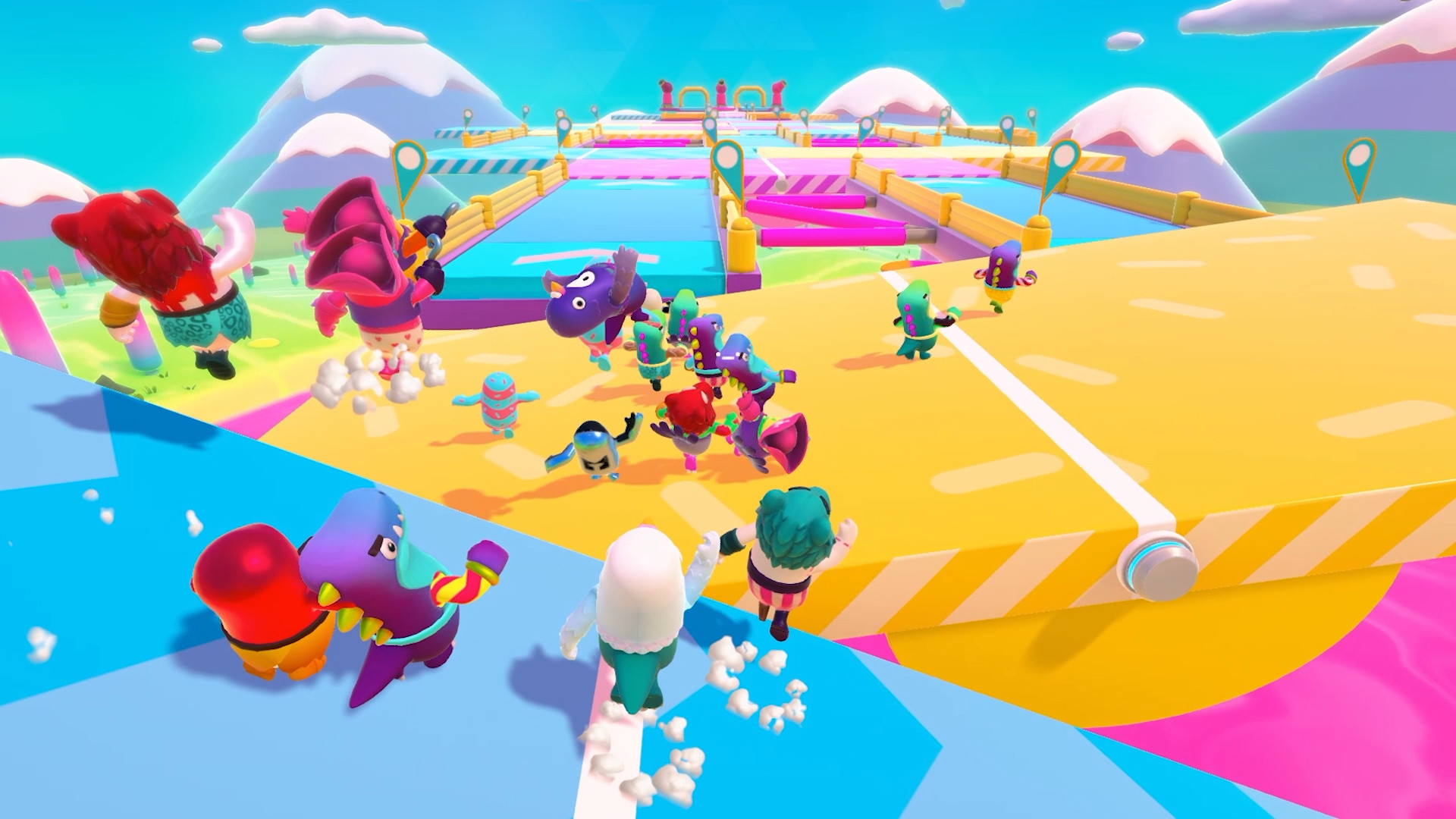 Controls are admittedly quite clunky, but seemingly intentional. You only really have a few buttons to memorize: movement, jump, grab, and dive. The grab is especially handy in two situations: during a game in which you have to grab a tail from another player, or just want to be an insufferable jerk and stand at the finish line, grabbing others and preventing them from qualifying (this happens frequently, but actually adds to the odd charm of the game). However, with you essentially playing as a customizable jelly bean (or whatever it is), the wonky controls add a bit of appeal to the experience. You'll still inexplicably trip around for no reason and when you fall, have the balance of a drunk frat boy, but it was never a hindrance to the fun of it all.

Make no mistake, Fall Guys isn't going to be winning any awards or getting Game of the Year, but it's exactly the game the world needed right now...

Fall Guys is, in its purest form, absurdly entertaining. It's some of the most fun I've had in a video game all year, which is really saying something considering just how many heavy-hitters there are in 2020. Make no mistake, Fall Guys isn't going to be winning any awards or getting Game of the Year, but it's exactly the game the world needed right now to just let loose and have mindless fun with. Mediatonic have proven that a simple proof of concept with the right, clever marketing can be the recipe for an unprecedented success - and it seems like Fall Guys has all the potential in the world for numerous skins, crossovers, collaborations, and more (at the moment, it looks like they might be cooking something with CD Projekt Red). 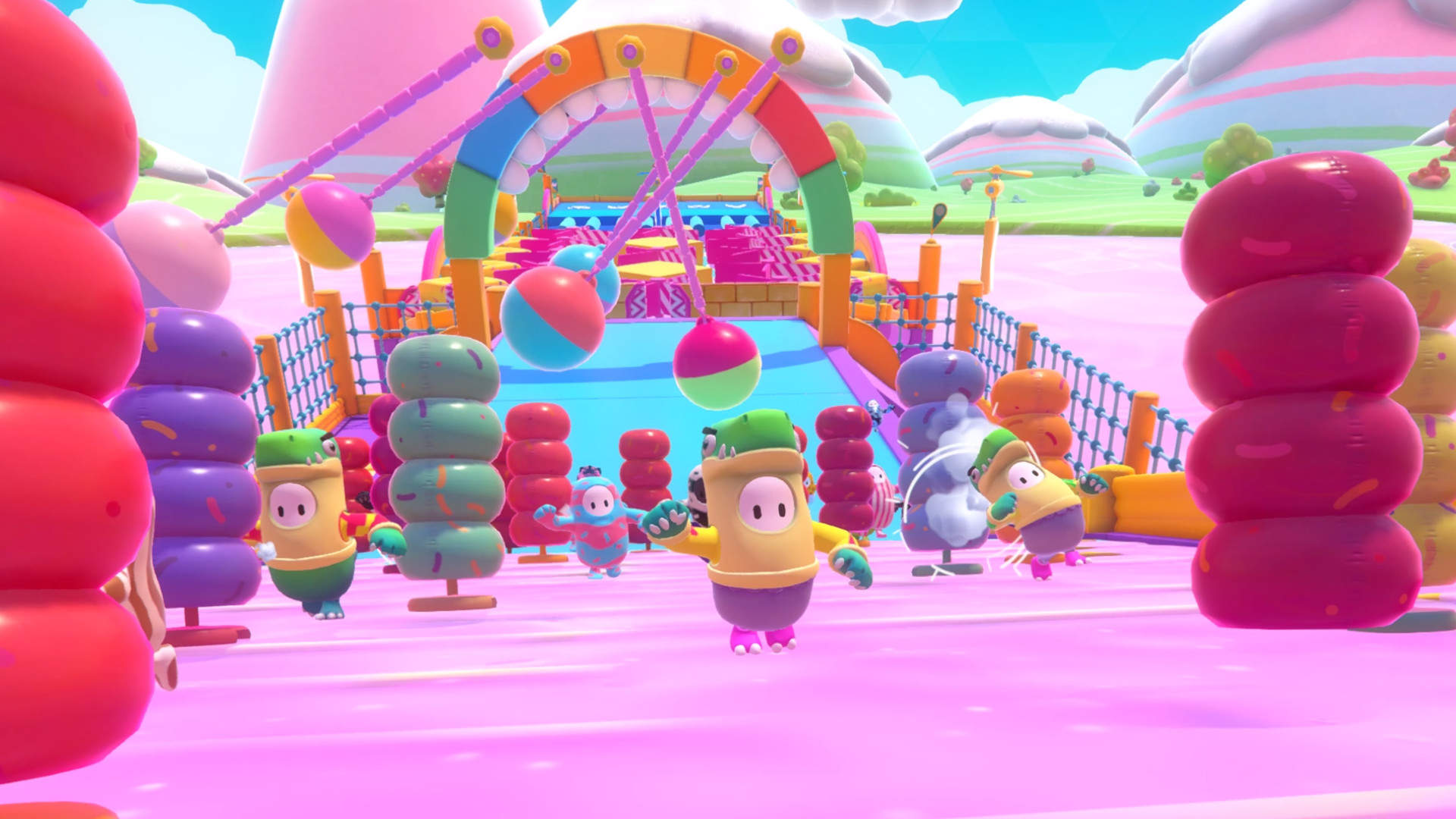 I've been quite vocal about my indifference towards the battle royale genre in the past. I never got into PUBG, and Fortnite's charm wore thin for me after the first few weeks (with only the odd special event reeling me back in). However, I never got that sense of disinterest playing Fall Guys. Quite the opposite, in fact, because I found myself hooked on the game frequently for hours on end. Addictive is the right word here, and Mediatonic's cute Takeshi's Castle-inspired game earns and owns that word.

Most courses (or Mario Party-style mini-games, if you will) are a barrel of fun...

As far as negatives go, though, the game is only as strong as the courses it throws you in - and this is where it can sometimes be tedious or a mixed bag. Most courses (or Mario Party-style mini-games, if you will) are a barrel of fun, such as Slime Climb which has contestants frantically ascending a series of obstacles while slime rises to consume the level, or Dizzy Heights which involves players running across spinning platforms that can send you flying in different directions. However, it's when the game's levels intentionally slow down do some of the uninspired designs start to show. A tile-matching mini-game - where players must stand on a matched tile to avoid falling - is slow and a bit on the boring side, while the tail-grabbing mini-game is held back by the slow, drab way in which the jelly beans "run". 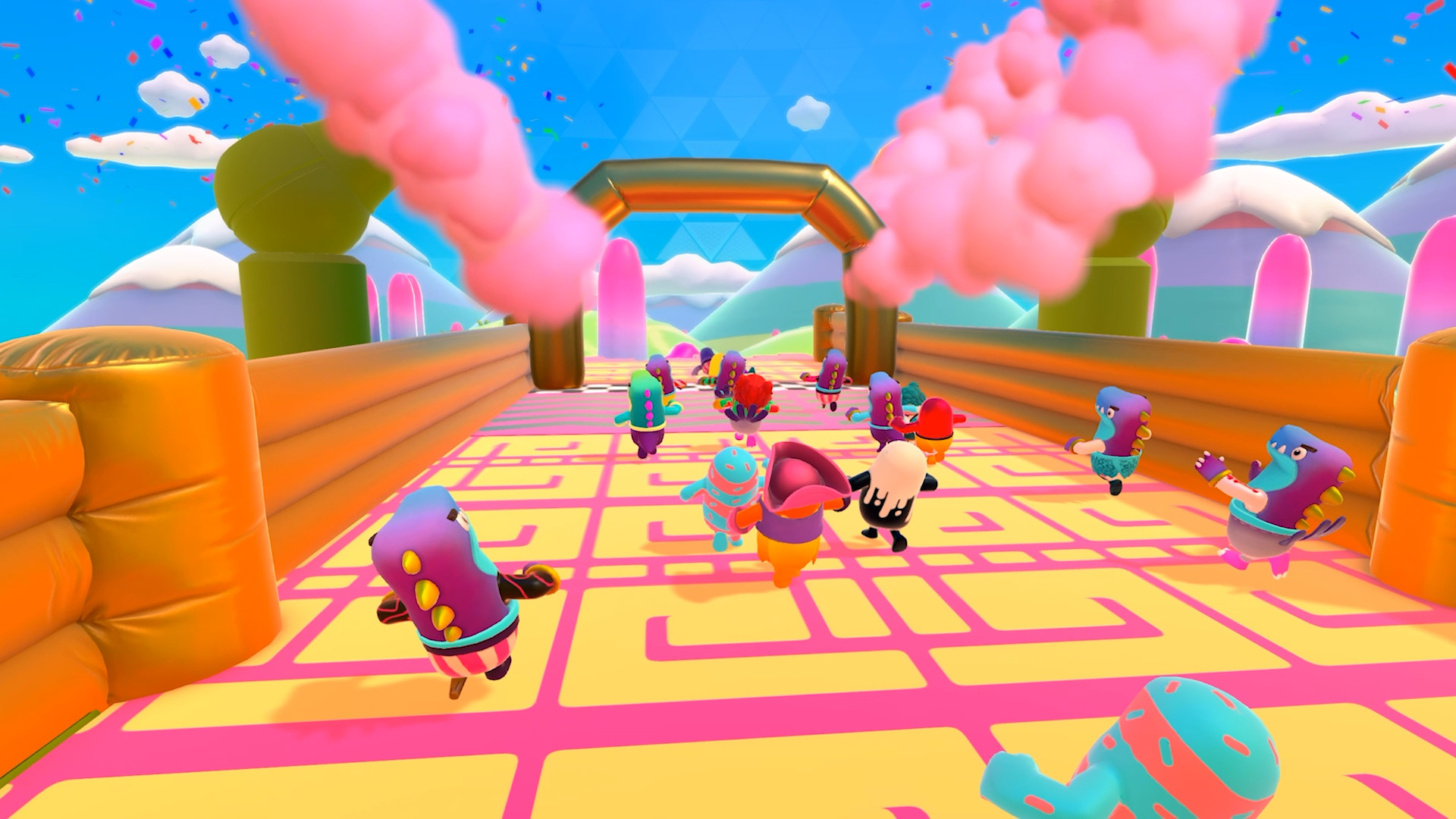 As you might've guessed, not all courses work, but in the two-dozen or so that are currently present in the game, a large majority of them are still incredibly fun and spectacular to participate in. If Mediatonic plans to introduce more courses with greater variety in the future, that would be welcomed, but as it stands, everyone will at least have some mini-games that make them sigh or yawn. As another small gripe, I did encounter a bug in the final stage in pursuit of the Crown (and friends have also experienced a similar issue) where grabbing and holding onto the Crown doesn't immediately give them a win, when it should. This was too infrequent to be a major issue, but it is something that could be patched out.

Fall Guys: Ultimate Knockout is potentially the feel-good game of 2020 (stiff competition there, Animal Crossing: New Horizons). It takes all the zaniness of Japanese game shows and infuses a charming battle royale style with a solid, eye-popping colour palette. It arrived at a perfect time in the world too, and thanks to it being free for PlayStation Plus members as well, attracted a lot more players to the experience who might've been feeling like Fortnite's running out of steam (we can only dream). While not perfect, and still could use with some patch work, Fall Guys is an incredibly fun and delightful game to get lost in during dark times.

Rough around the edges (needs some patching)

Some courses are boring or frustrating