The fast and the forgettable. 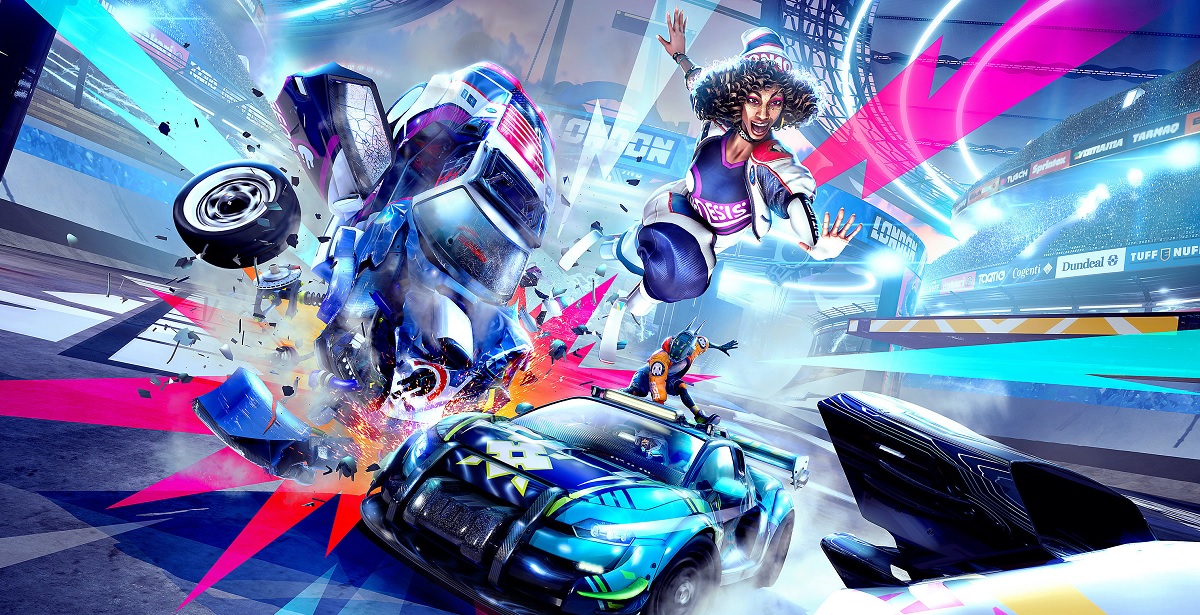 Destruction AllStars acts as a reminder that vehicular-based combat titles are in incredibly short supply in the gaming world. While developer Lucid Games' latest colourful title fills that void for a few hours of pure mayhem and carnage, it leaves a lot to be desired for the classic days of Twisted Metal, Destruction Derby and bolder entries in the sub-genre. Destruction AllStars is fun while it lasts, with colourful characters and engaging combat, but it's impact is diluted by a severe lack of content and bizarre paid DLC add-ons. 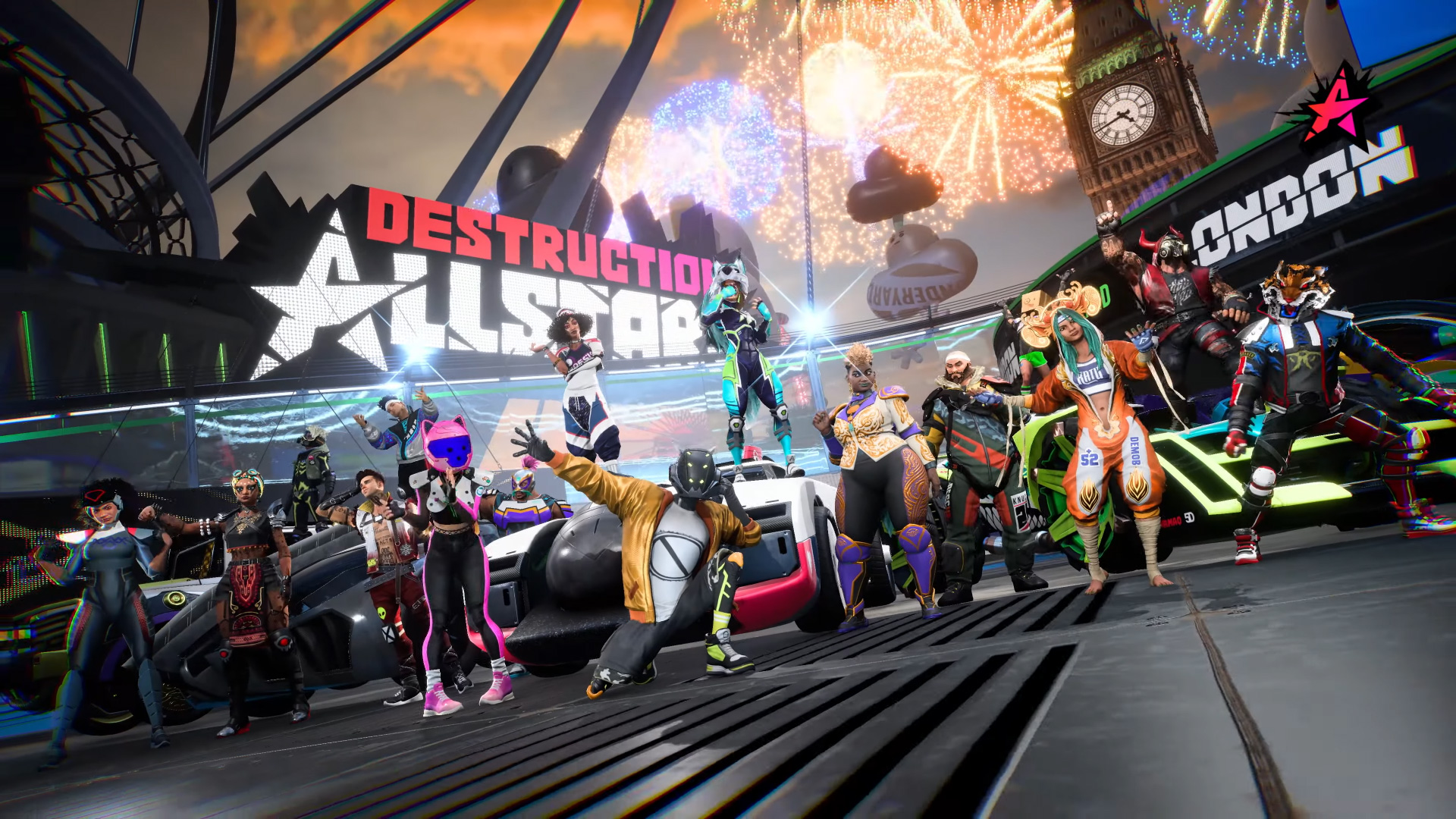 Destruction AllStars follows a pretty simple premise: several players are thrown into a brightly lit arena and must find vehicles scattered around the environment in order to ram other opponents for points or objectives. There's some variety in the way each mode is presented, but for the most part, your priority will be to ram into others at high speeds in elaborate games of chicken. On paper, the concept is cool and could potentially make for a great breakaway from its battle royale contemporaries flooding the market, but Destruction AllStars undermines some of its more novel ideas way too often.

The arenas themselves, though in short supply, are grandiose and eye-catching...

The best thing about Destruction AllStars is its presentation. Like Overwatch, it's a supremely colourful and vibrant feast for the eyes brimming with creatively designed levels and characters. The latter in particular boasts some endearing oddballs clearly taking a few pages out of Overwatch's design book, complete with various personality quirks exemplified by their striking and memorable designs. The arenas themselves, though in short supply, are grandiose and eye-catching - as one might expect from a title oozing with neon lights and slippery slopes. In that regard, it's not too different to Rocket League's own wonderfully designed stages, but Destruction AllStars does add some great verticality to its mayhem. 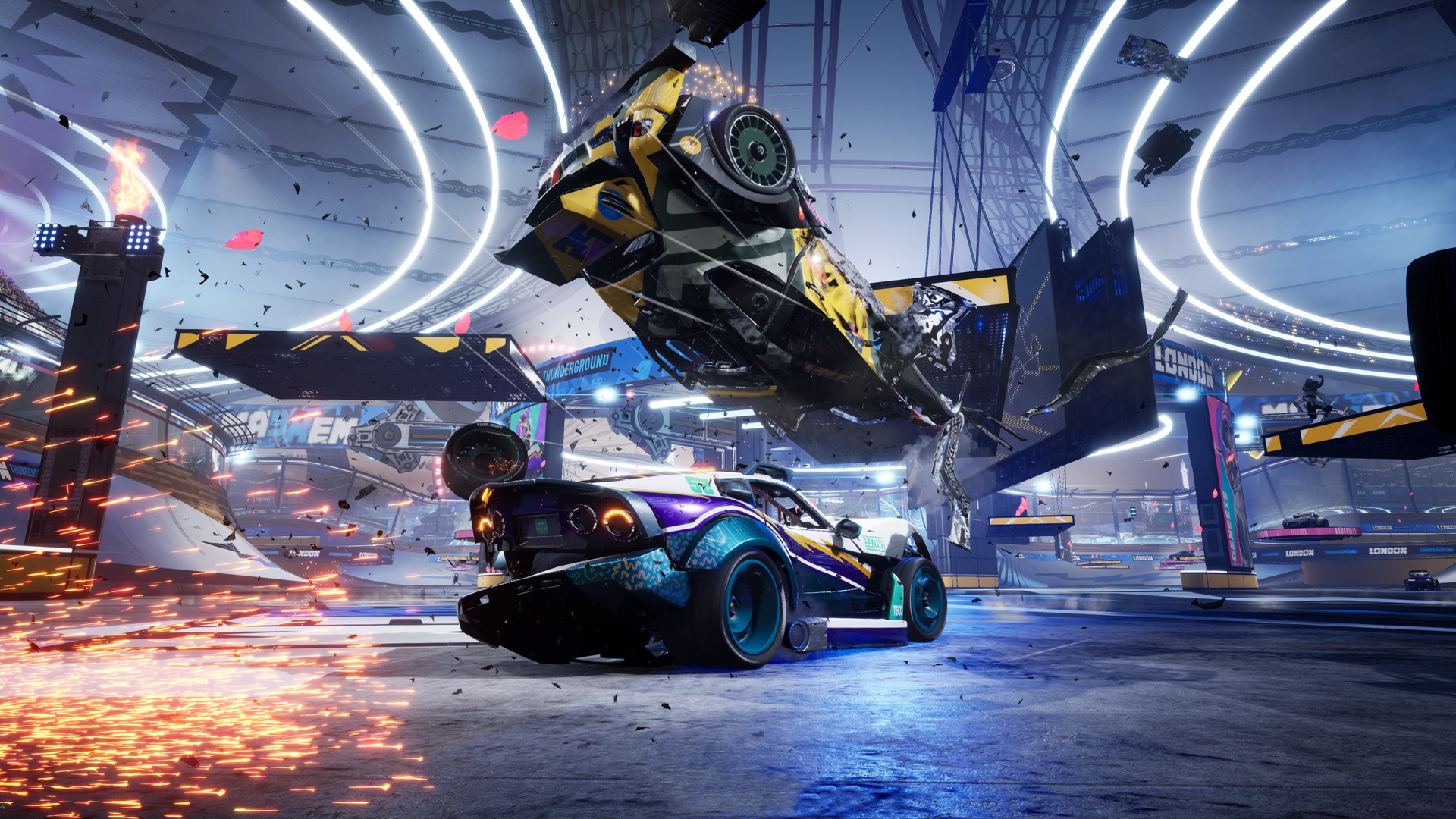 There's currently four multiplayer modes at the time of writing: Mayhem, which pits 16 players against each other in a free-for-all skirmish; Carnado, where two teams of eight must acquire gears by ramming opponents and transporting the items into a tornado for points; Gridfall, which is pretty similar to the Hex-A-Gone minigame from Fall Guys in which players have to navigate a gradually collapsing floor; and finally, Stockpile, which tasks players with getting out of their vehicle frequently to stash points at various bank locations.

Unfortunately, the modes aren't nearly as interesting as they sound. Mayhem is obviously the most popular mode as its simply a free-for-all vehicular royal rumble, and this is where Destruction AllStars actually shines the brightest. It brings all the game's best mechanics to the forefront of the experience: find cars, wreck opponents, rinse and repeat. In all modes, you have to think carefully about how you engage in combat, as your car has a "health" meter that, when depleted, forces you to run and find another. Thankfully there's always another vehicle in reach, so you don't spend too much time on foot apart from Stockpile. 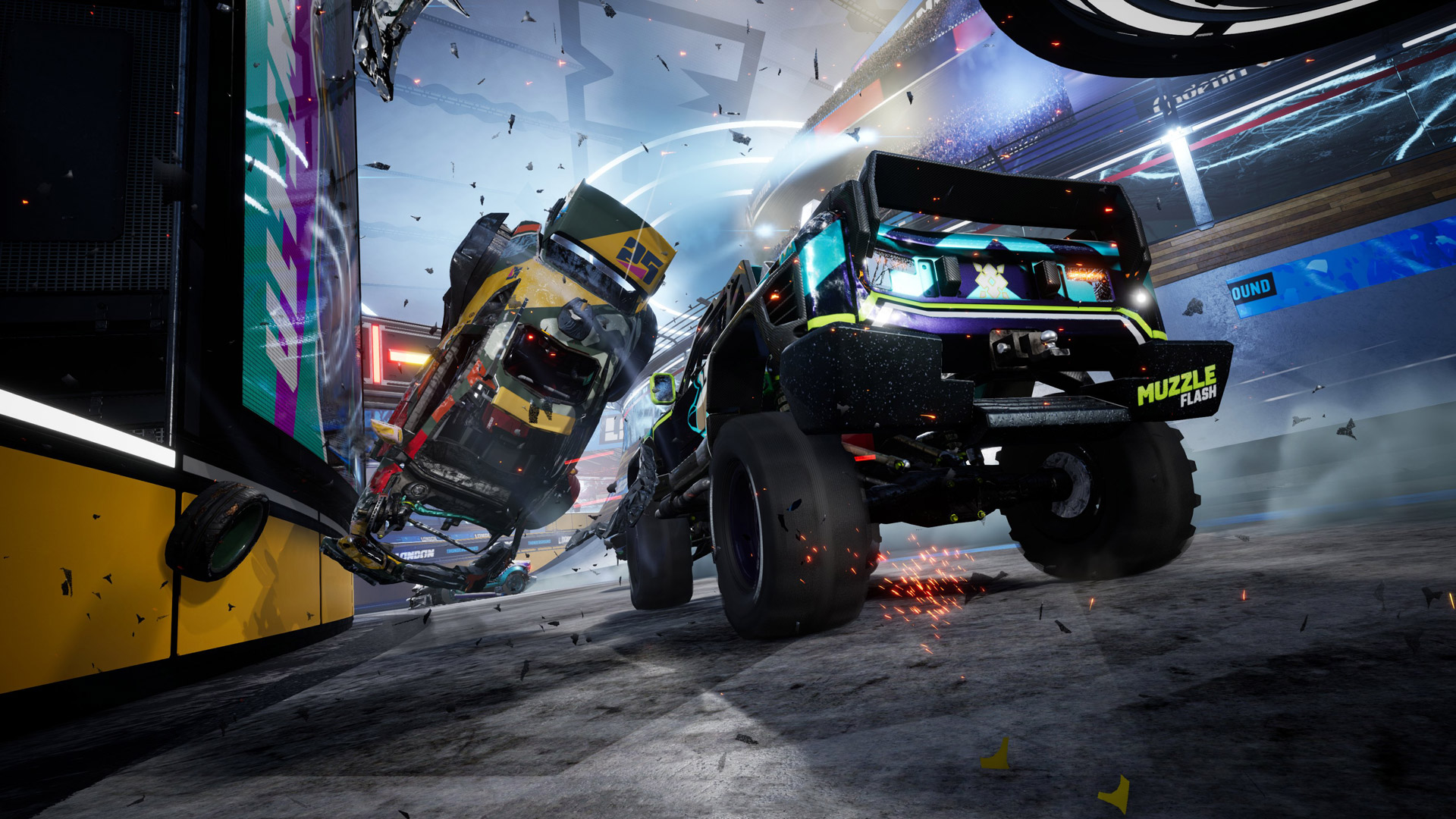 You're given a handful of cars and types to choose from, but their strengths and weaknesses aren't really given that much attention. Burly SUVs can tank damage, but it comes at the risk of being quite slow, while sports cars can dash around the arena at high speeds, but are as strong as toilet paper. You have to be selective of the car you choose, but even amidst the chaos of opponents attempting to ram you constantly, there's little time to contemplate your choices. Whichever vehicle is the closest is what you typically have as an option. Some characters may actually run faster or jump higher, but you really just want to be in a car as soon as possible and for as long as possible.

This brings me to one of the most disappointing aspects of Destruction AllStars: its microtransactions.

Mayhem is easily my favourite mode, but Carnado does have an interesting and wholly original take on hording, though you're always at the mercy of your teammates who, with the roll of a dice, may or may not act according to your expectations. Playing by yourself in Mayhem is where you'll squeeze the most fun out of Destruction AllStars, but unfortunately, it's short-lived fun. At present, the game is terribly dry on content. Apart from the aforementioned multiplayer modes, you have single-player content where you can practice against AI bots, or Challenge Series, mini-games centered around specific characters. 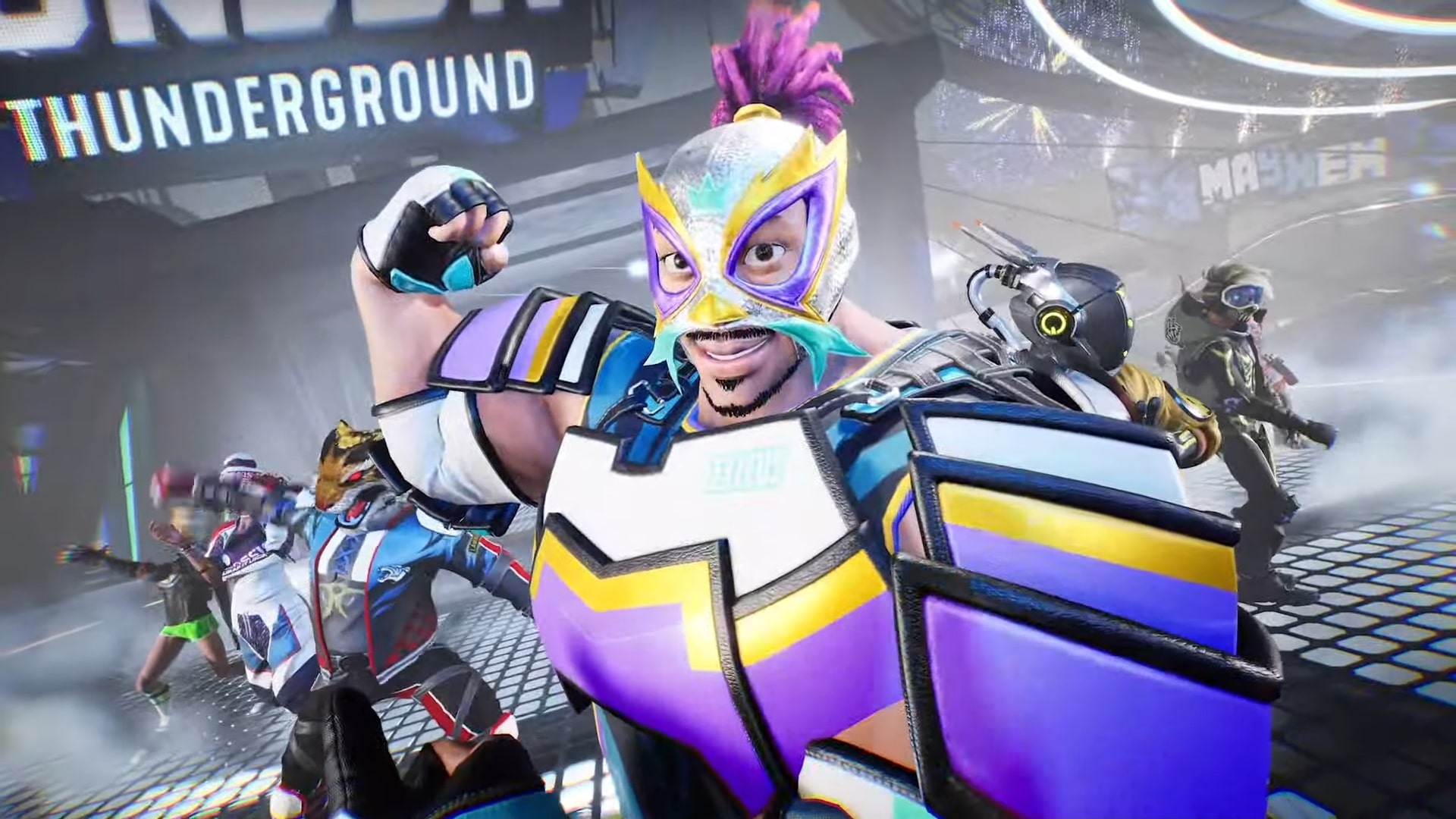 This brings me to one of the most disappointing aspects of Destruction AllStars: its microtransactions. There's one Challenge Series pack currently available in the base game, with the rest planned to roll out as paid DLC. Even though this is a "free" game for the time being under PlayStation Plus, the game will eventually be sold again at a premium price. If you're still required to purchase Challenge Series packs even after paying full price for the game, it's a tragic misstep that undercuts the game's good intentions. It also has a fairly limited lifespan with its lack of multiplayer modes, maps, characters, and vehicles, so charging for DLC rollouts may not work in favour of prolonging its lifespan.

Since the focus will primarily be on the multiplayer/online aspect of the title, its single-player content feels like an afterthought that, unfortunately, reminds me of 2015's Star Wars: Battlefront and its notorious PR nightmare. It's a shame because Destruction AllStars does have the potential to leave a lasting legacy in the gaming industry and stand next to Fall Guys, Fortnite and the likes. Quite simply, it's too undercooked with an egregious focus on microtransactions hampering its impact. 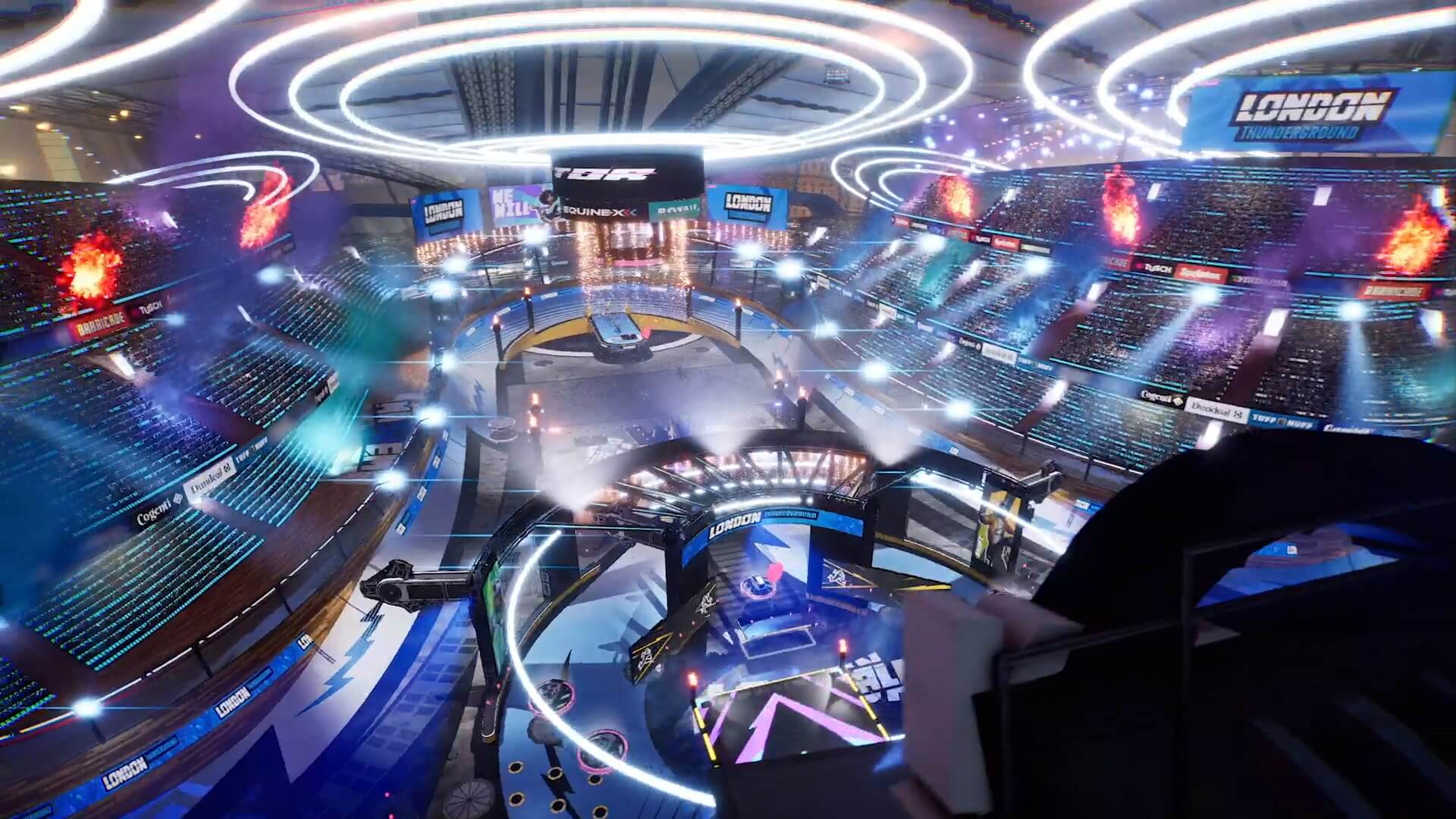 Destruction AllStars boasts vibrant characters, an eye-catching presentation, and fairly entertaining gameplay, but the game's lack of content and underutilized ideas are sadly detrimental to its appeal. It may serve as good fun for a weekend with friends, but - despite having most of the right ingredients - doesn't have nearly the staying power it needs to succeed like its mainstream competitors on the market. You're left with a fine but ultimately shallow and short-lived gaming experience that's beautiful to look at and fun to play for a few hours, but ultimately forgettable and hollow under the hood.

Single-player is an afterthought