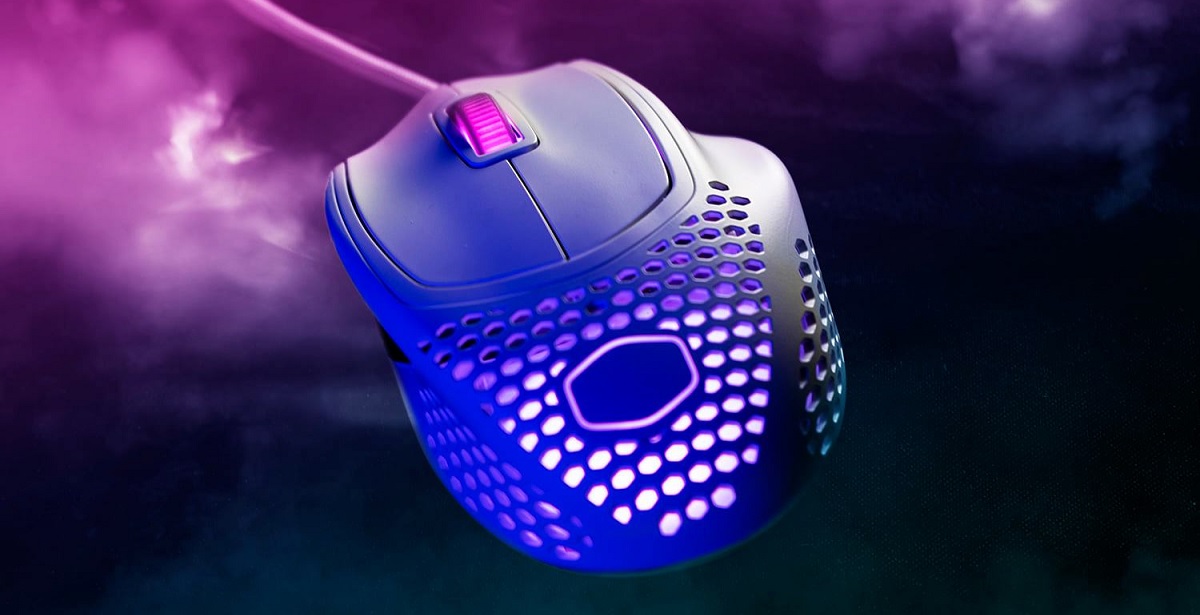 Cooler Master’s MM720 will seem quite familiar to quite a lot of gamers. That’s not surprising because it’s quite literally a legendary mouse reborn. The original version of the mouse was released almost a decade ago and was known as the Cooler Master Storm “Spawn”. It became an extremely popular mouse among claw grip users and we’re pretty sure that there’s quite a few still in use out there right now even. Now, Cooler Master have brought it back in the form of a more modernised version, packing some great features into a compact and extremely lightweight casing. 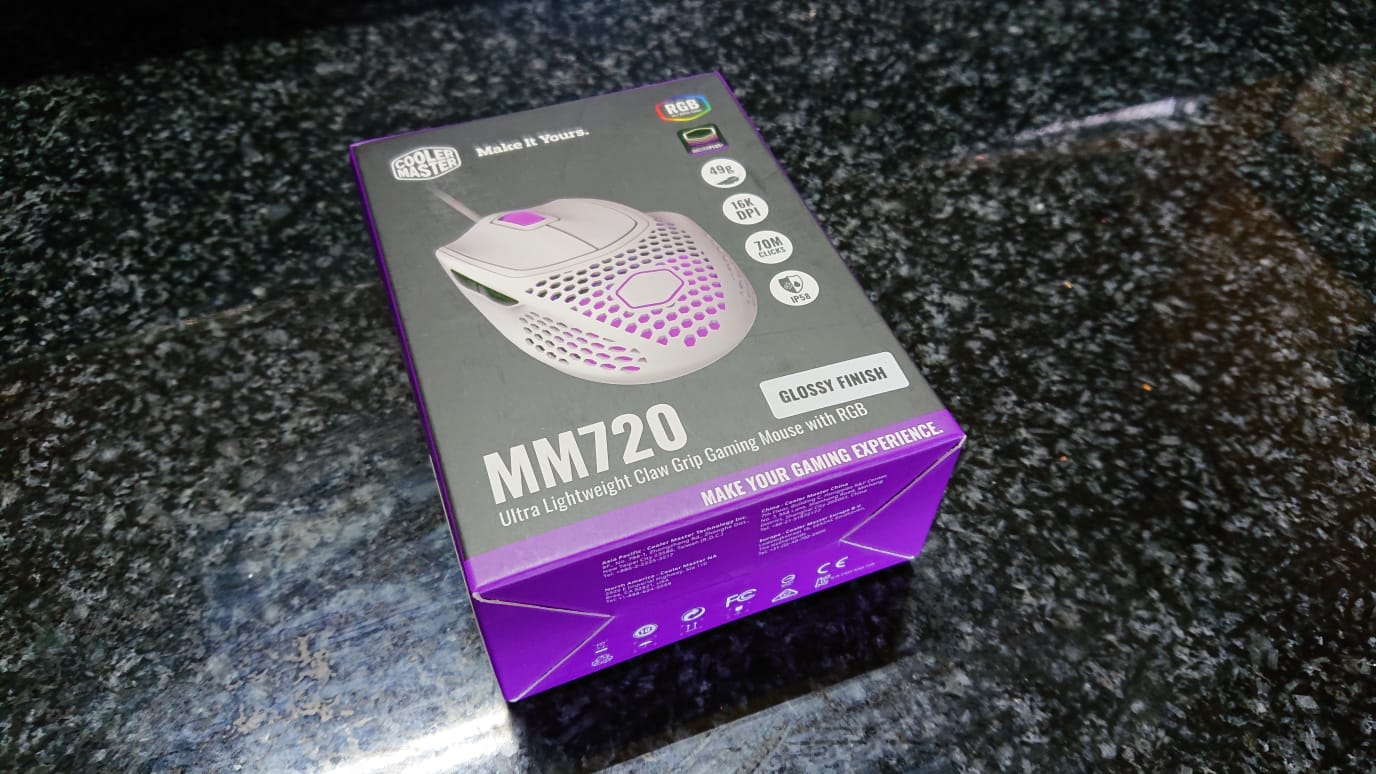 First up, let’s get into the technical specs of the MM720. You can check them out below:

Now that the technical specs are out of the way, let’s delve right into why the MM720 still outshines its competition as a claw grip mouse. First up, the light weight. Now while this is entirely up to personal preference, there are plenty of gamers out there who prefer their mice to be as light as possible. Coming in at an incredibly miniscule 49 grams, the MM720 offers gamers effortless glide with the mouse. If you’re a fan of heavier gaming mice, avert your eyes from this product and look at Cooler Master’s or another manufacturer’s more traditional range of mice. This ain’t for you if you want a chunky brick of a mouse. 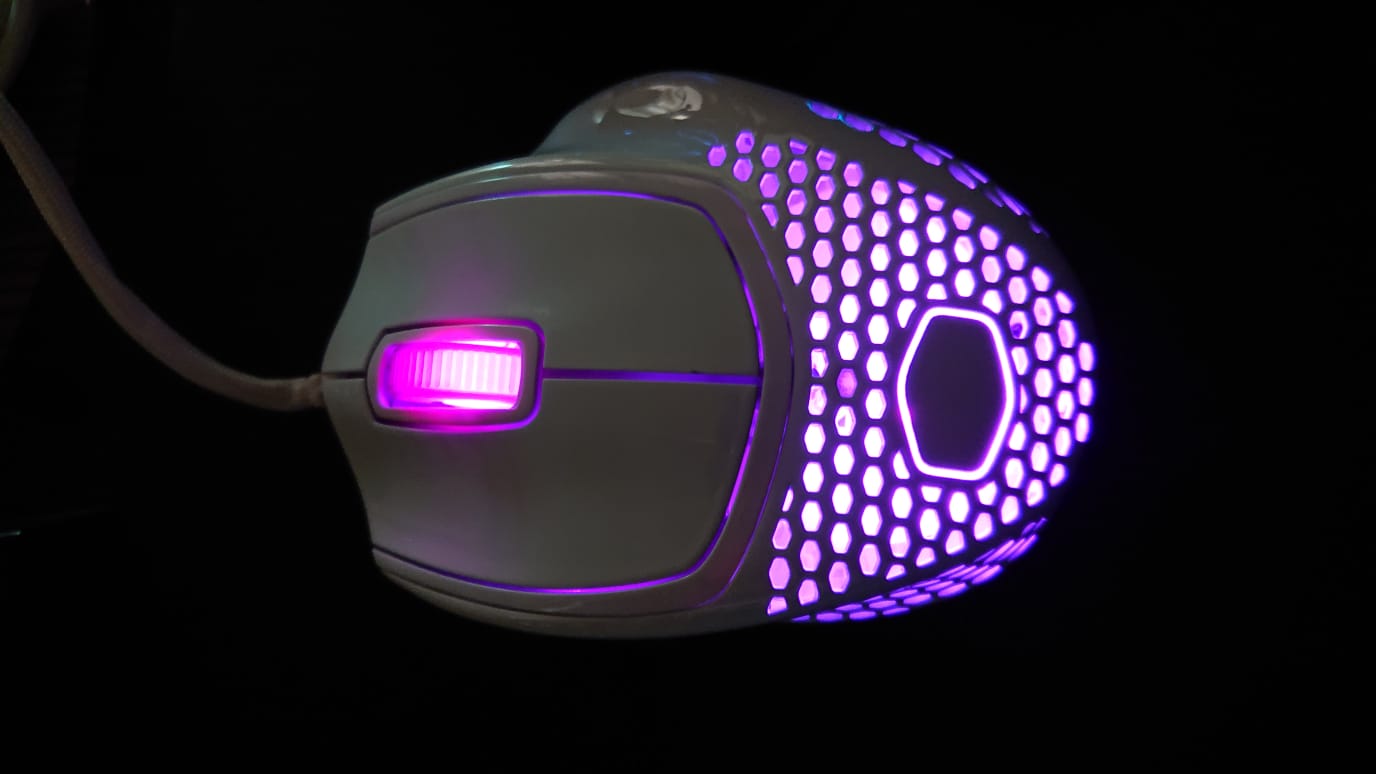 The low weight combined with the PTFE mouse feet, located at the bottom of the mouse, ensure that the MM720 can be moved with ease across your gaming surface. In the two weeks of using the device, we experienced zero problems with drag. Using the mouse took some getting used to due to the lighter weight but once we acclimatized to it, it felt great. Almost too good in fact.

The mouse has been optimised for a claw grip with a convenient finger rest on the right hand side for added comfort and control.

The MM720’s shape might come across as slightly weird since it is rather unconventional. This is because the MM720 is aimed at claw grip users. What this means is that your palm doesn’t really rest entirely on the mouse surface but your fingertips will. The mouse has been optimised for a claw grip with a convenient finger rest on the right hand side for added comfort and control. There’s two-side buttons which are easily accessible on the left and they are in the perfect position for daily usage if you set up macros for them. Holding the mouse with a claw grip feels natural and gamers will be able to flick it around on their mousepads with ease. 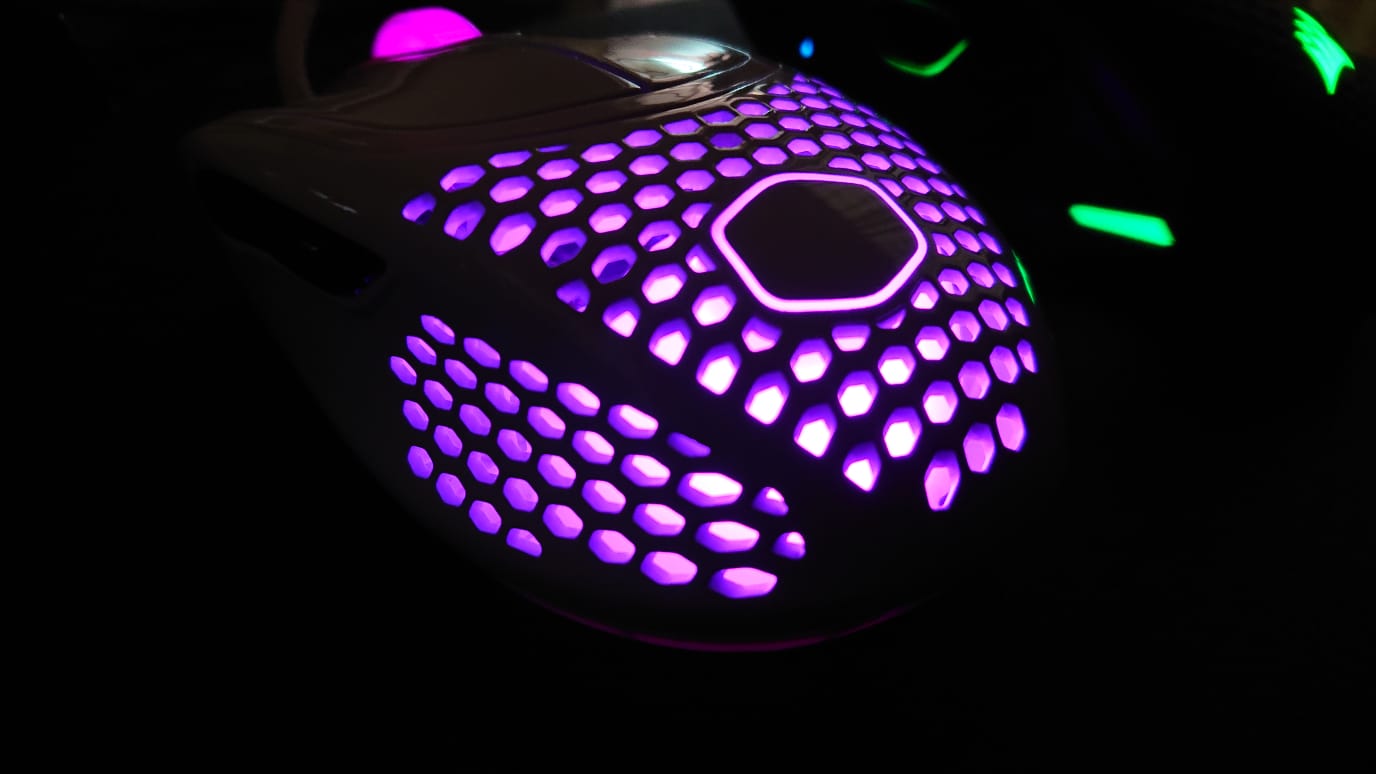 Cooler Master have opted to use LK Optical Mouse Switches in the MM720. These switches are known for reducing debounce time to almost nothing and are claimed to actuate nearly three times faster than traditional mechanical switches. This is thanks to a laser being used to detect clicks. It sounds high-tech and legitimately is high-tech because this effectively means that when you click the MM720, your click will register ridiculously fast. This is great news for competitive gamers who play titles such as CS:GO or Overwatch and want an extremely responsive mouse. It also means that there’s less mechanical moving parts within the mouse which can wear out over time. A real winning formula here. 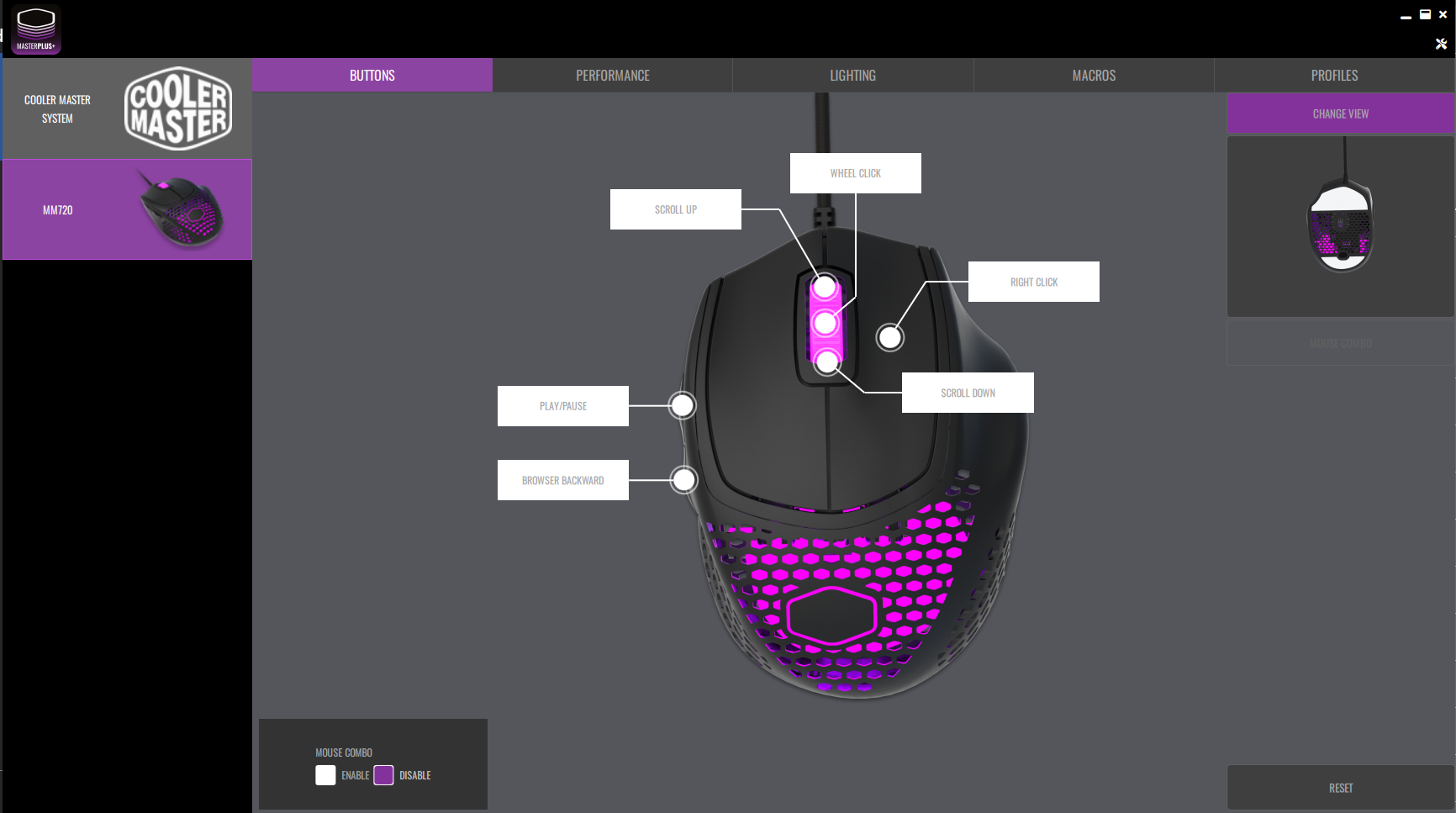 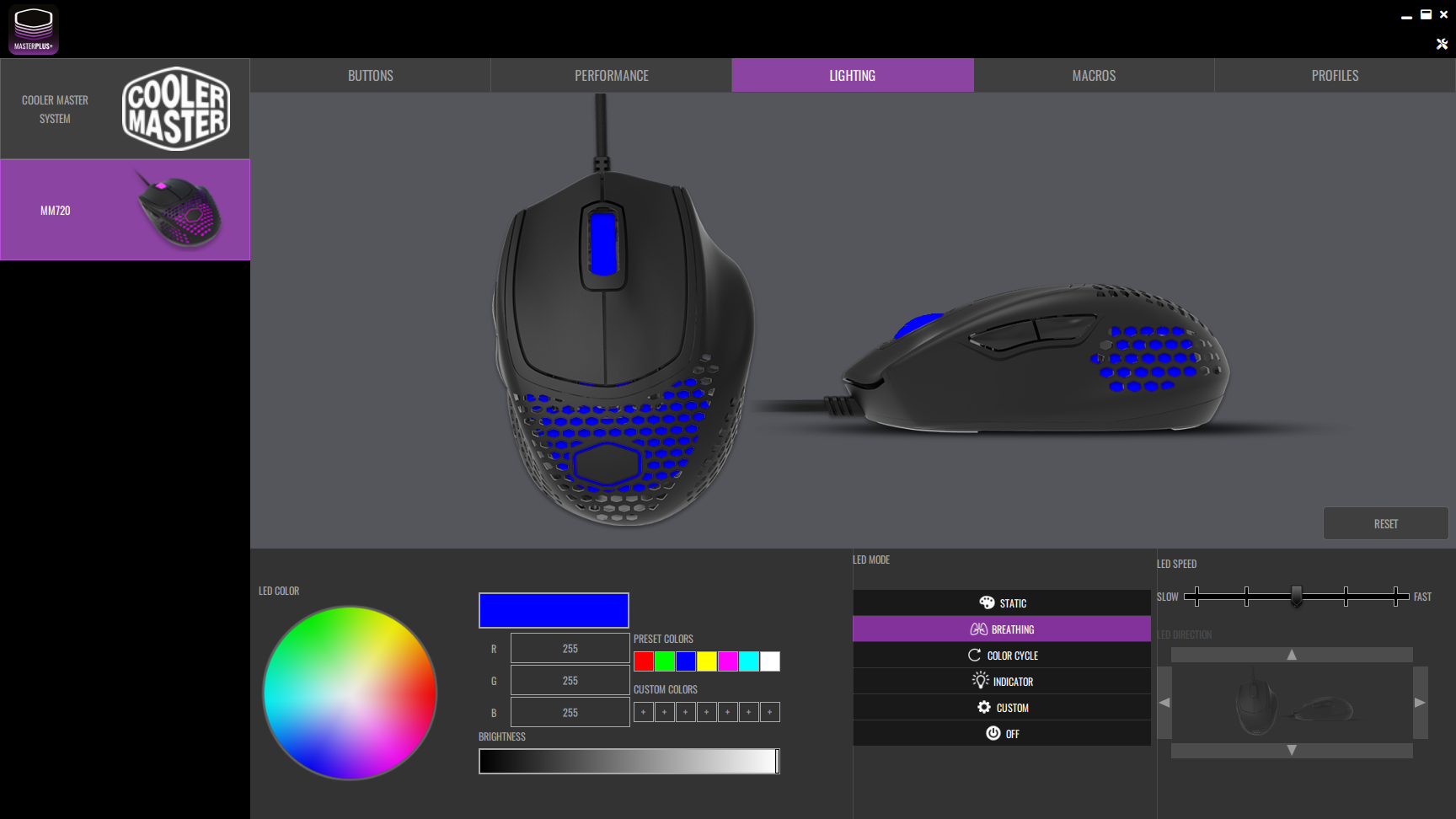 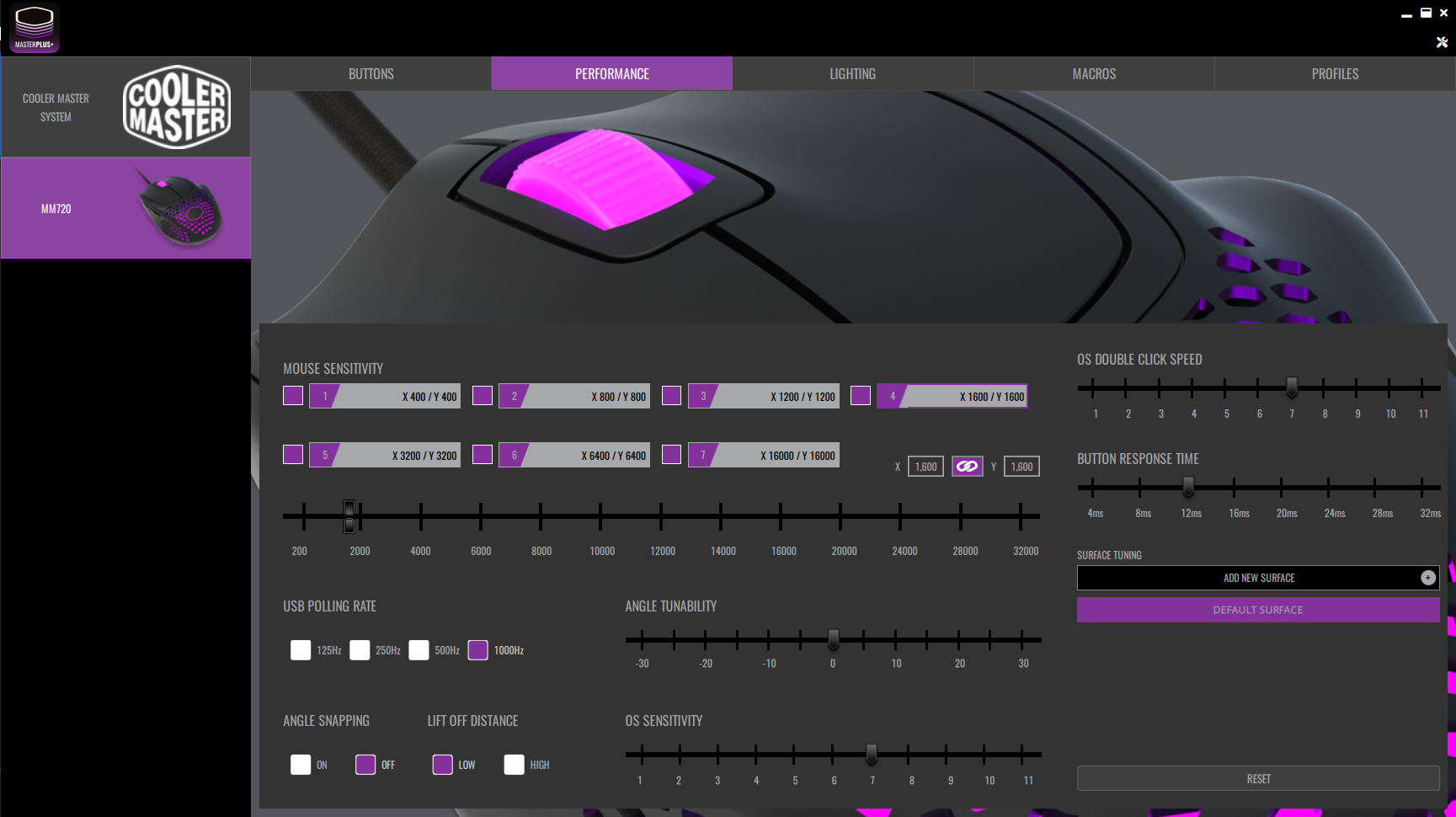 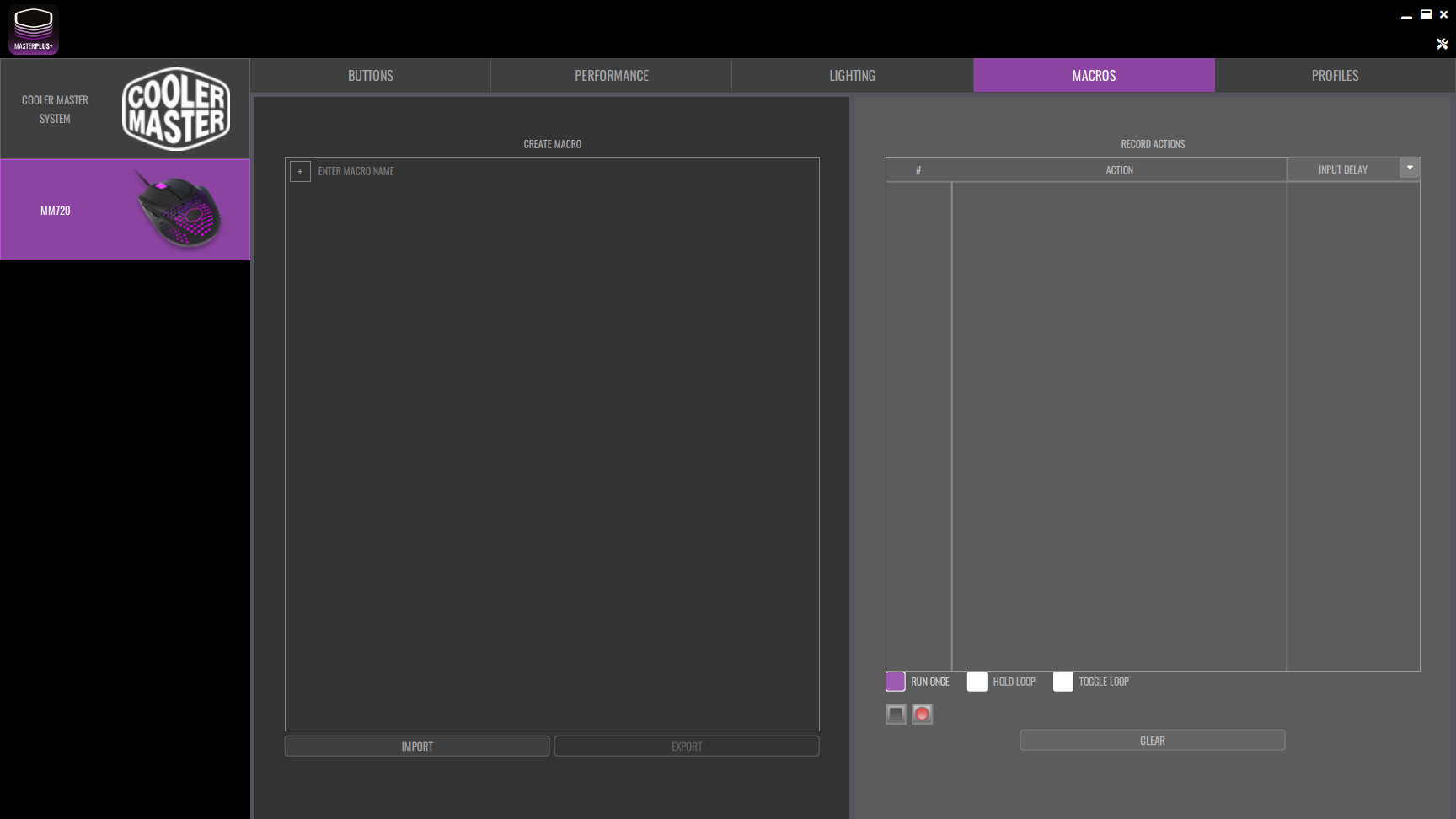 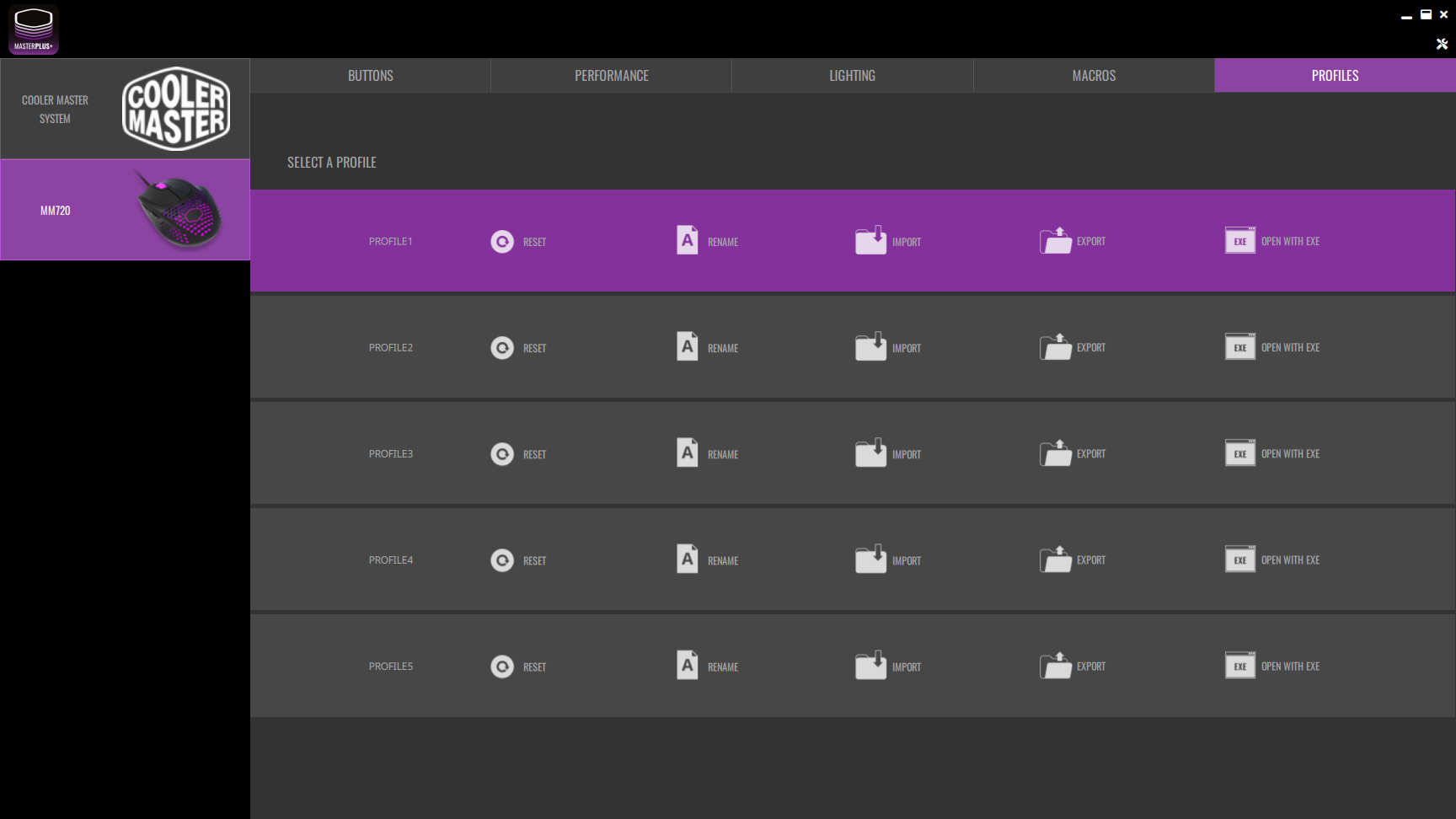 Using the mouse during actual gameplay while playing Destiny 2 felt great. The MM720 was responsive throughout and the Pixart PMW3389 performed as expected. This is quite a common high-end sensor used in mice these days and it’s good to see it in the MM720 - Especially when you consider the MM720’s price point of around $49.99.

Using the mouse for daily tasks was extremely enjoyable too and it never felt like a let down. The light weight, which may seem gimmicky at first, really did make quite a difference and possibly may even reduce wrist strain over time. We suggest giving it a try first if you can, since the weight really comes down to personal preference, however may grow on you as it did with us. 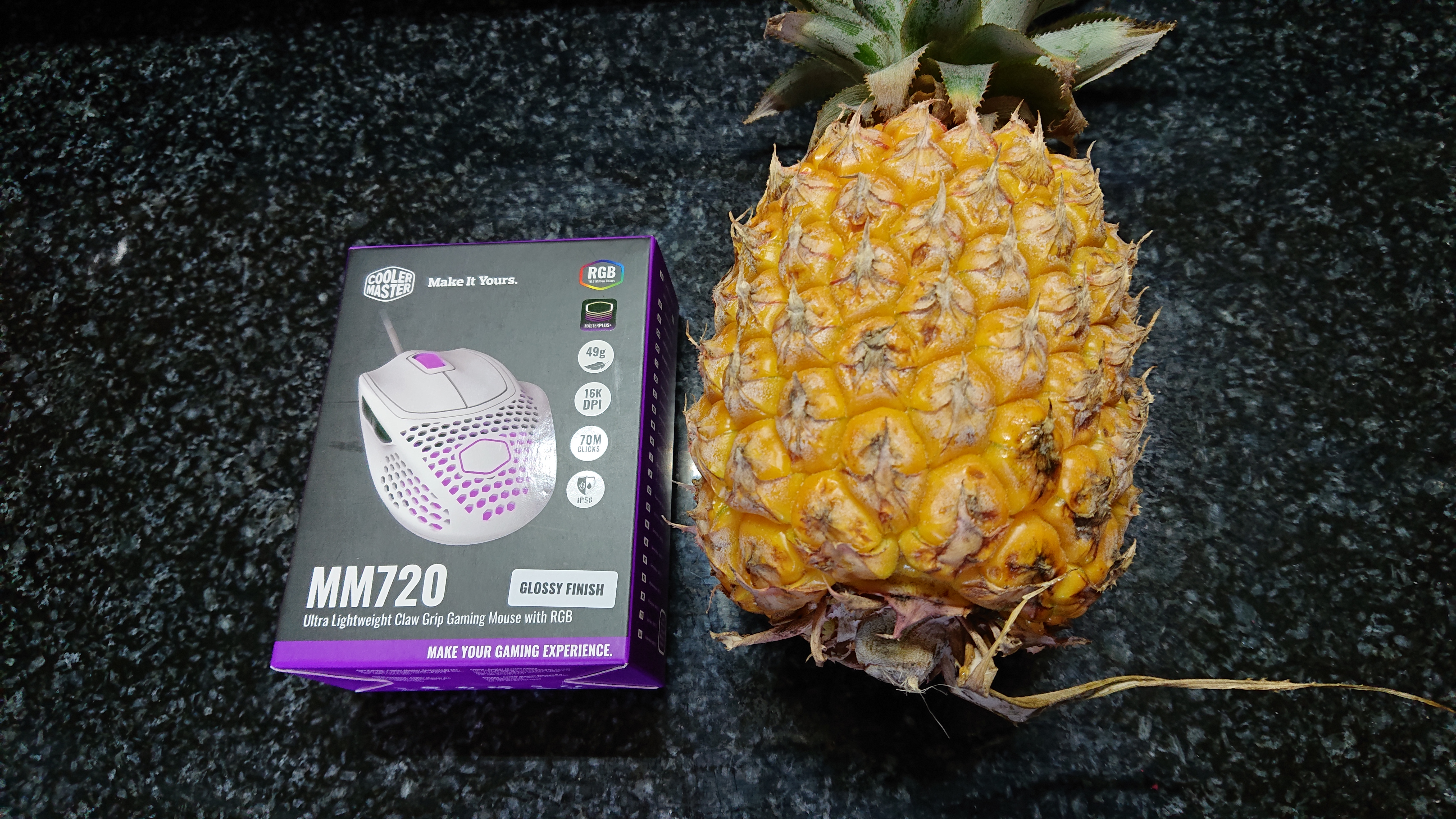 The MasterPlus+ Software to configure the mouse’s more intricate settings needs to be downloaded from Cooler Master’s website. Once set up, it is fairly straightforward to use. Users can change the 2 RGB lighting zones located in the mouse and can set up macros and change the DPI settings. Users are also advised to run the surface calibration so that they get the best performance from the mouse sensor based on the surface they are using the mouse on.

The honeycomb design on the mouse surface definitely contributes to its strength...

The overall build of the MM720 felt quite strong. Despite being only 49 grams, the outer shell felt solid enough with almost no flex even with a strong pushing force applied by hand. The honeycomb design on the mouse surface definitely contributes to its strength and we’re fairly confident the MM720 could survive being bounced around in a laptop bag or backpack daily quite easily. 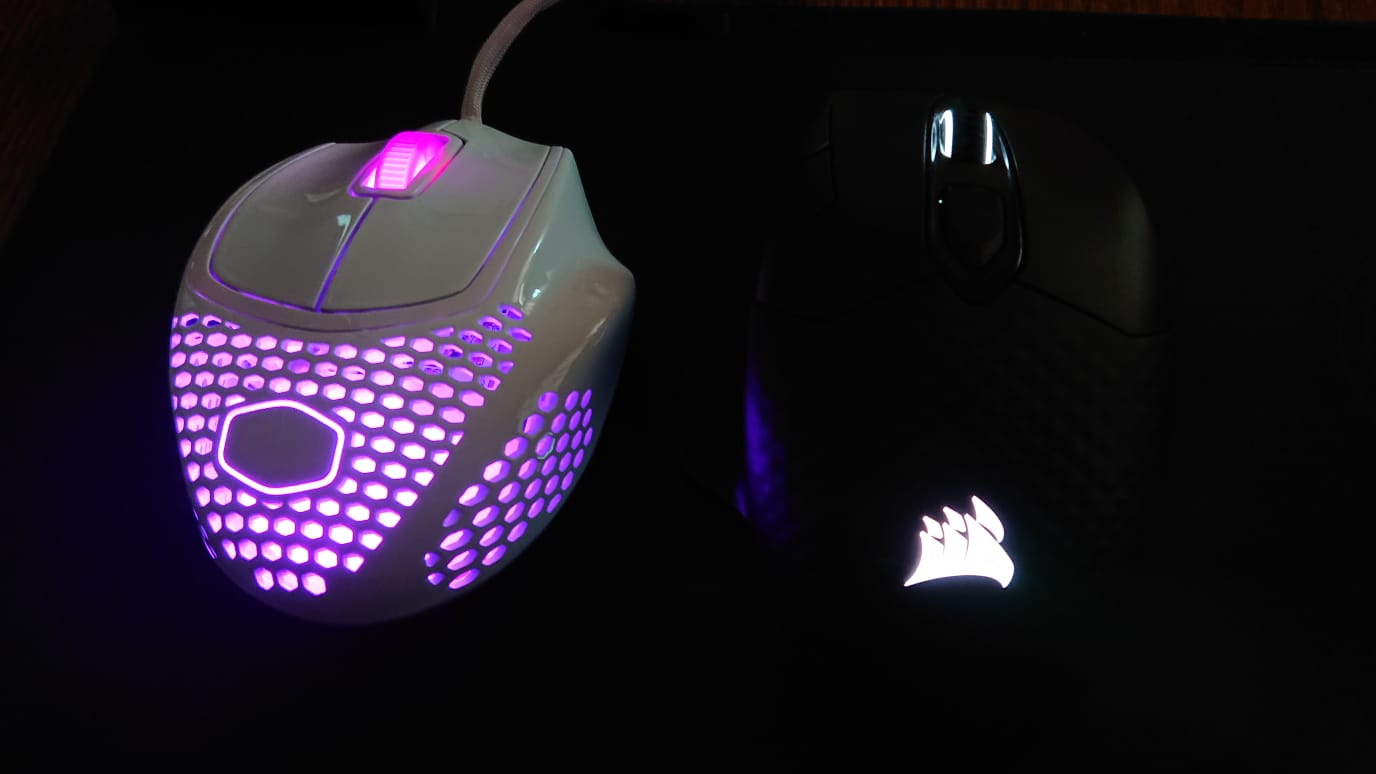 The MM720’s cable features an ultra-light fibre material and this helps keep the mouse’s overall weight down. The cable itself is rather lengthy at 1.8 metres long but can be easily managed since it’s super flexible. The entire mouse is also IP58 rated and certified so it can be cleaned off with water quite easily if it gets dirty. The mouse we reviewed was glossy white so we’re expecting it to become quite grimy quite quickly. It should be noted though that the mouse does feature an anti-dust and anti-water coating to protect it from spills and sweaty palms alike.

If you’re looking for a mouse that won’t break the bank, look no further.

Overall, the MM720 from Cooler Master is a solid rebuild of a staple claw grip mouse that is still loved by casual and competitive gamers. The high-end Pixart sensor contained with the MM720 performs great and the optical switches ensure that every click registers immediately. The DPI settings and the rest of the mouse’s features are all well rounded and it’s quite comfortable to use daily both for gaming or general usage. Cooler Master’s MasterPlus+ software makes setting up macros and changing settings a breeze and the MM720 can be safely recommended as a solid, claw grip mouse that users can trust and rely on. If you’re looking for a mouse that won’t break the bank, look no further. Just be sure to give it a try first if you can since the lower weight may not be to your liking.
9

Extremely comfortable to use

Light weight might not be to your personal preference