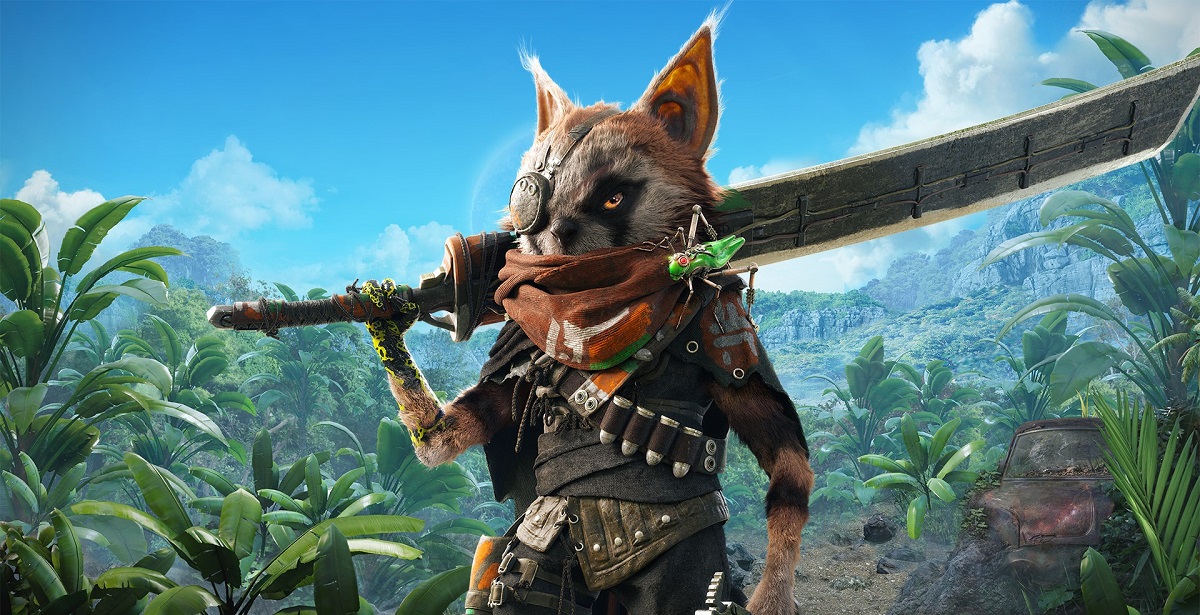 The critical moment for me in Biomutant came after I had conquered my second tribe (of three) and defeated the second Worldeater (of four). I opened the map and sighed at the sight of several concurrent main quests and the 30+ secondary quest markers I had accumulated (despite having decided to ignore secondary quests for several hours at that point). No matter how much I wanted to be invested in the fate of its world, the characters in it, or engage with the complex RPG and crafting mechanics, I was exhausted. According to the stats, my playtime was only 20 hours, yet Biomutant’s bland and repetitive quest design made it feel twice as long.

It’s a shame as Biomutant has a great premise and gameplay mechanics. Events take place in a lush and vibrant post-apocalyptic future, and Biomutant structured as a fable in the making. A single narrator – who you’ll eventually grow to hate due to the unavoidable repetition in such a long game – recounts the backstory, current events, and even character dialogue (everyone speaks a form of gibberish that he interprets).

The themes feel topical but well-intentioned, covering environmental destruction, the end of humanity, and the history of several species that adapted and rose to power. The environment, despite often appearing calm and serene, is still scarred by pockets of pollution and the tree of life is dying. Some tribes wanting to cleanse the world by accelerating the process, while others want to unite and save it. It ties into the narrative, as taking the light or dark path triggers different responses from secondary characters and changes the tone of the narrator. 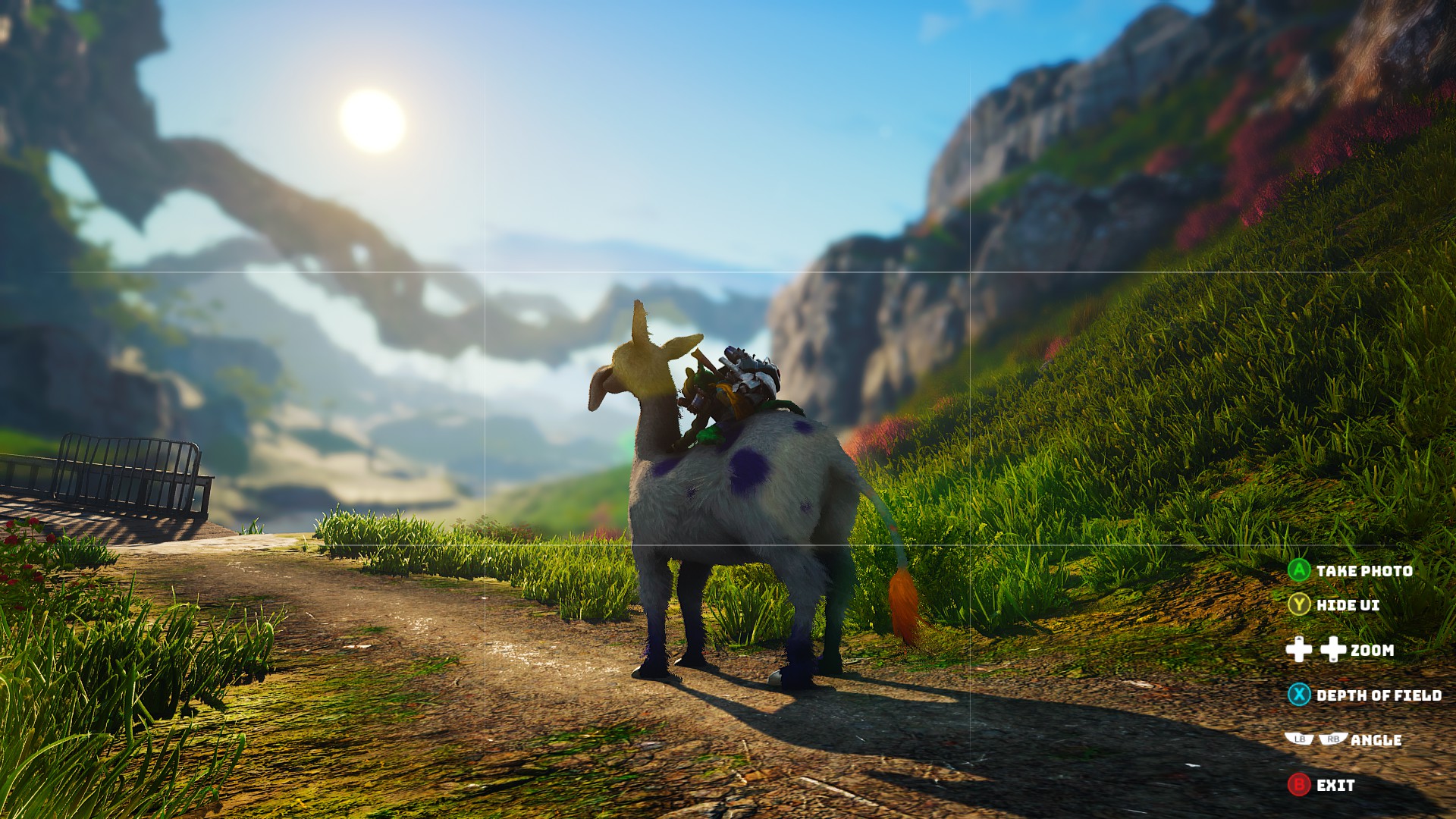 It’s a shame Biomutant does its best to distract you from immersing yourself in such a beautiful world. Here you can see the photo mode, which has an intense depth-of-field filter, in action.

After customising your protagonist – who ultimately remains small, furry, and mostly bipedal mammal – you emerge into a massive open-world world after a dull tutorial introduces you to the basics of traversal, combat, and gear management. I quickly came to enjoy the storytelling in the opening hours, as it effectively covers three time periods: the distant past that you learn about when exploring ruins; playable sequences from the protagonist’s youth when they first learned the tenets of “Wung-Fu” and lost their family; and most of the game played in the present, with the protagonist having returned to save or cleanse the world.

I quickly came to enjoy the storytelling in the opening hours, as it effectively covers three time periods...

Dialogue interactions offer basic choices, though those decisions can affect mission outcomes and your aura – represented by two competing light and dark spirits – that shifts as you play. In addition to choosing a light or dark tribe, there are options to express selfish or selfless motivations, and multiple NPCs to rescue or exploit along the way. The unexpectedly detailed conversation system even references aura conflicts between your past and present decisions, which is impressive, but also prone to making mistakes at times. 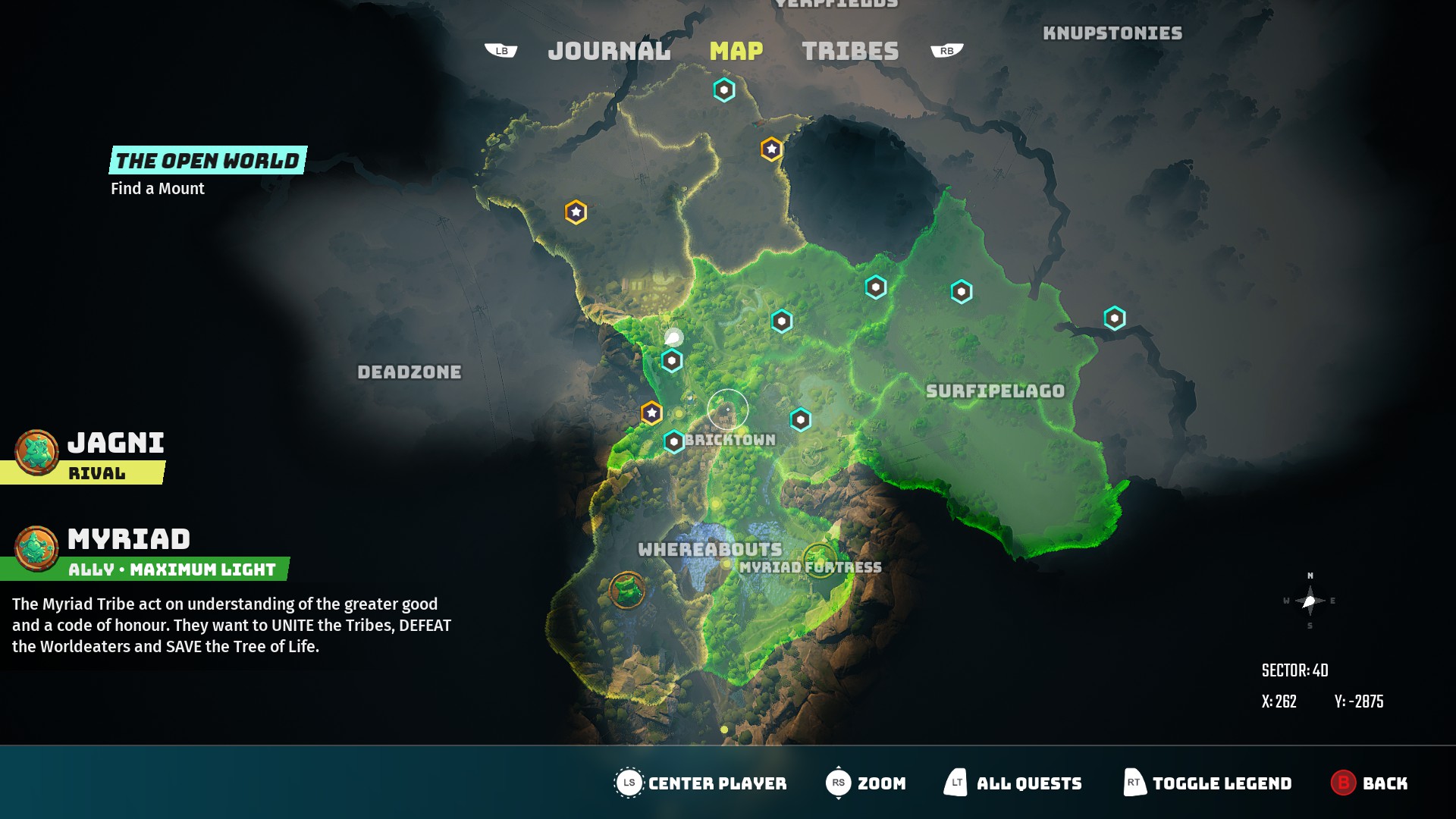 In the opening 5 hours, everything seemed manageable. Unfortunately, the map soon becomes an intimidating clutter of quest markers.

When it comes to the narrative structure, outside of the scripted opening and closing sequences, Biomutant gives you a set of core objectives from the get-go and lets you get on with it in any order you chose. The world is yours to explore and each main questline is a discrete arc, despite several NPCs sharing the same goal. This ensures the narrative never feels disjointed if you bounce between quests. Sadly, the same can’t be said for the multitude of side quests – easily over a hundred – which use repeating lines of dialogue and stock responses to dole out tasks that boil down to fetch quests or solving rudimentary puzzles.

...traversing the world – especially on a mount – still looks good and feels immersive.

The basic gameplay in Biomutant is a mix of exploration, traversal, light puzzling, and combat. The non-combat activities – the traversal and platforming – feel fast, fluid, and a little floaty as your character never feels truly grounded in the world. Thankfully, are very few sections that require precision movement, and traversing the world – especially on a mount – still looks good and feels immersive. There are roadblocks you need to overcome, such as hazardous locations that require a protective suit, a door that requires the right tool to open, or several devices are activated through simple rotation and switch puzzles (only a move limit adds challenge). To streamline things, whenever you encounter an obstacle to your progress, Biomutant immediately points you in the right direction to find the gear you need. 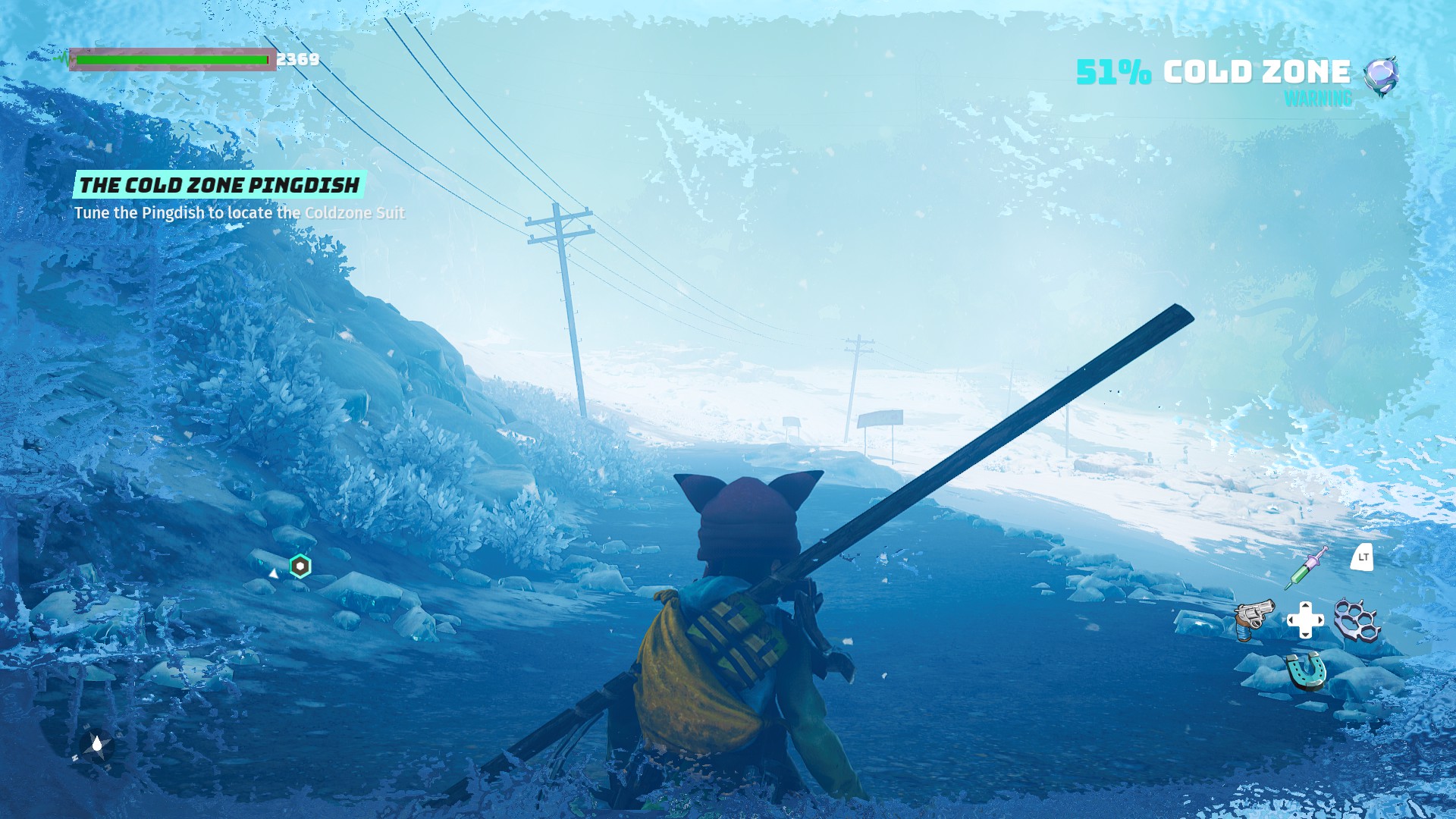 From fire and ice, to biohazardous and radiation pockets, several polluted zones require the right gear to traverse, even if you’ve boosted your character resistances.

When it comes to combat, the acrobatic Wung-Fu moves always look great. Despite the choice to boost several attributes other than agility, you’re nimbler than most foes. Dashing in and out of groups of enemies, isolating tougher or deadlier foes, and finding the right space to strike and trigger a combo attack are essential. Wung-Fu seamlessly blends melee or ranged attacks with dodges, dashes, backflips, ground slams, slides, and everything in between. That said, I’d have liked a dedicated lock-on function as you often find yourself flying past enemies.

Unfortunately, Biomutant takes several hours before you begin to feel powerful and, even then, the combat rarely feels as impactful as it looks. With the options for single- or two-handed melee, several firearm types, and the ability to dual-wield in either class, there are plenty of combos to master. However, no matter how powerful my character became, a combination of enemy-scaling and a general lack of feedback made it feel like I was always chipping away at spongey health bars. 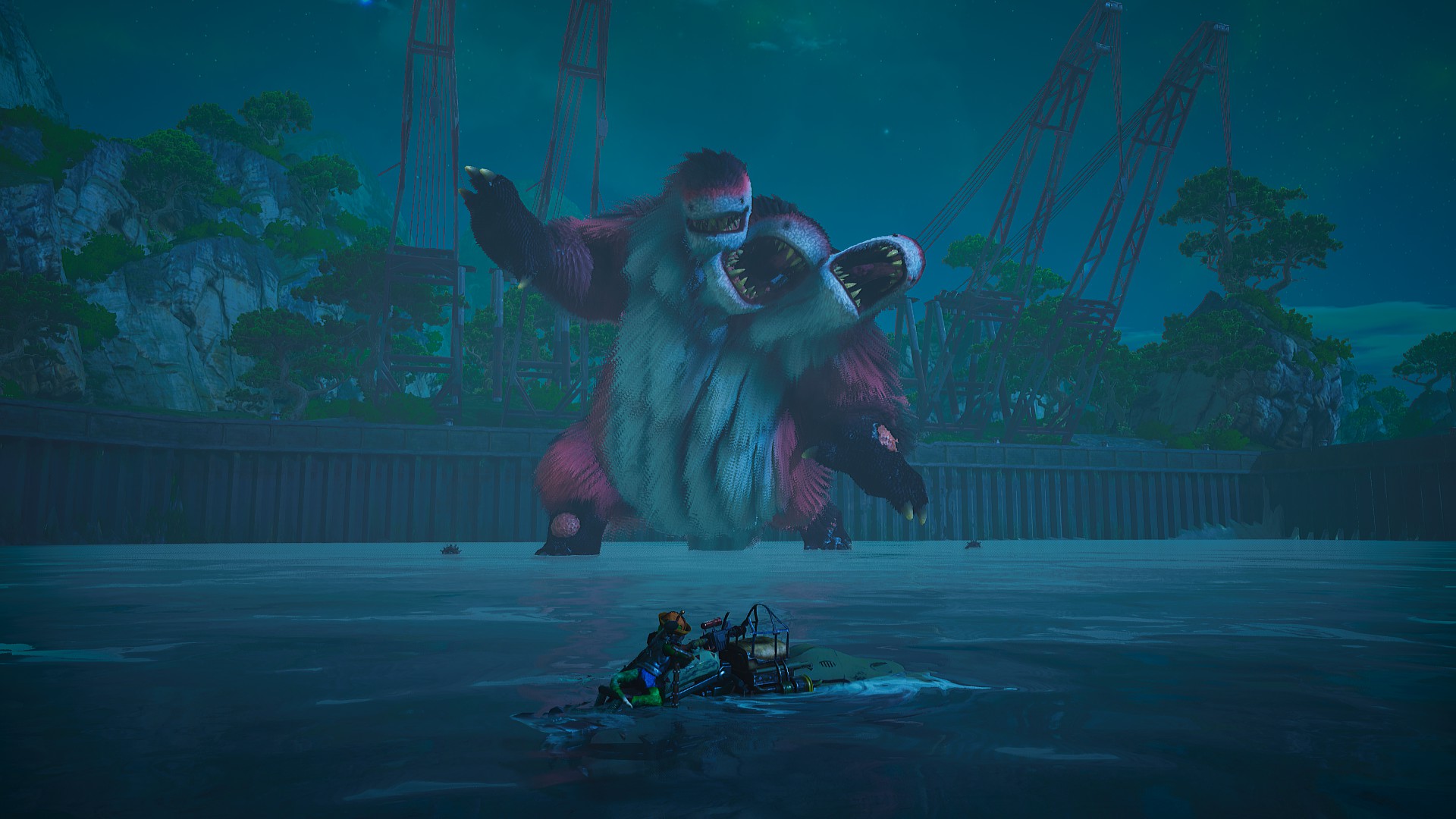 For the bulk of the game, tough encounters rely on enemy numbers. The major boss fights, however, incorporate a puzzle- or vehicle-based combat phase to spice things up.

Perhaps part of the reason for the lacklustre combat is that Biomutant is more of an RPG than the trailers would have you believe. Although some skill is always required in combat, the character and gear levelling systems quickly become more important in determining your damage output. Experience is gained at a steady pace, while the game showers you with gear, mods, and crafting materials. At every level, you can up an attribute and spend points spend on perks, elemental resistances, bio-mutations, and psi-powers (think magic). You can discover gear that requires a higher level than your character, so there is always something new and exciting to equip.

...Biomutant is more of an RPG than the trailers would have you believe.

That said, you may be better off breaking down each item, using the components and salvaged material to craft even snazzier weapons that better suit your playstyle. Each weapon has a basic frame that you can add a myriad of attachments to, while each piece of armour supports several stat-boosting mods. With these components – which come in several quality tiers – you’ll find yourself spending a lot of time in the crafting menu and optimising your loadout frequently. Thankfully, you can save your outfits to one of five slots, ensuring you always have a hazard-resistant suit or element-specific weapon you can access on the fly. 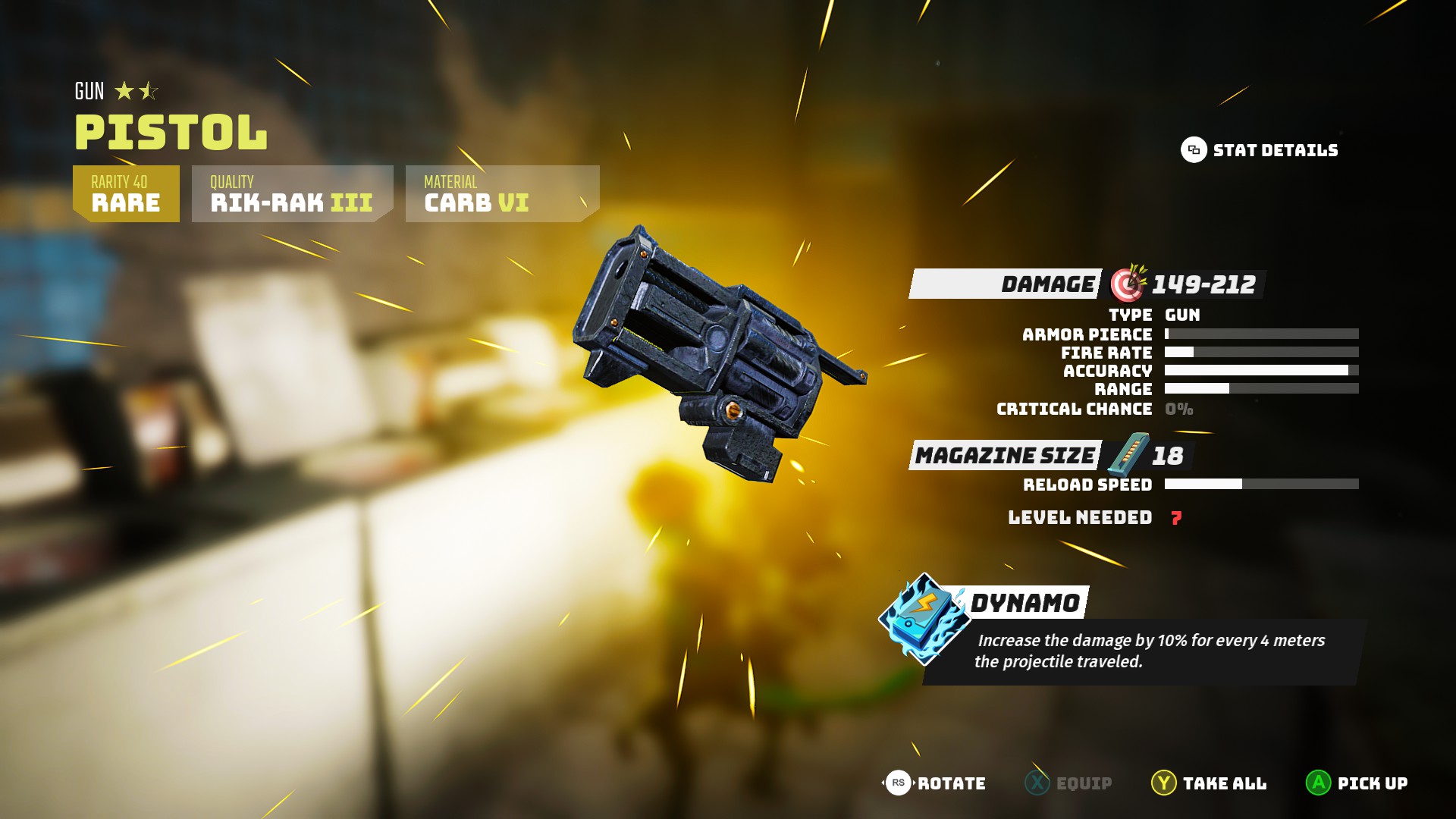 The flexible crafting system, which allows you to craft or modify your own gear, is a highlight. It requires a lot of materials, but you can also level up your gear's tier and material quality to keep it viable for longer.

Unfortunately, all these elements are underpinned by a mission structure that is both generic and bloated to an absurd degree. Primary missions may involve several visually unique areas and the major boss fights mix in some puzzling. However, easily 90% of your time is spent pursuing banal tasks for NPCs that, upon completion, will probably unlock even more secondary tasks (often on the other end of the damn map, regardless of what the dialogue implies). Finding a set number of objects, rescuing prisoners, killing named bandits, and liberating outposts – all these tired tropes are accounted for. It feels like playing The Elder Scroll V: Skyrim or Fallout 4, only to discover the entire game consists of auto-generated “radiant” quests.

This relentless assault of repetitive and tedious quests diminishes every other aspect of the game. The world is beautiful, diverse, and atmospheric – mixing calm ambient sounds with a serene soundtrack – but soon you’ll be reduced to fast-travelling everywhere, bouncing between dozens of markers. The overarching narrative and key characters are intriguing, but the game spends so much time doling out meaningless distractions, I sometimes forgot what I was doing. The combat, levelling, and crafting mechanics are all engaging, but they grew stale 15-hours into a 30+ hour game (assuming you focus on mainlining the primary quests).

A lot has been said about the scope of Biomutant and the ambition of the 20-person developer, however, there’s also an argument for recognising and working within your limitations. Biomutant suffers from a severe lack of focus and quantity-over-quality approach, which dilutes the impact of every other element in the game. In such a crowded market, with dozens of high-profile (and expensive) games vying for attention, Biomutant risks disappearing into the crowd, with all its unique and well-developed systems forgotten, by choosing a basic framework that was dated by the middle of the last generation. 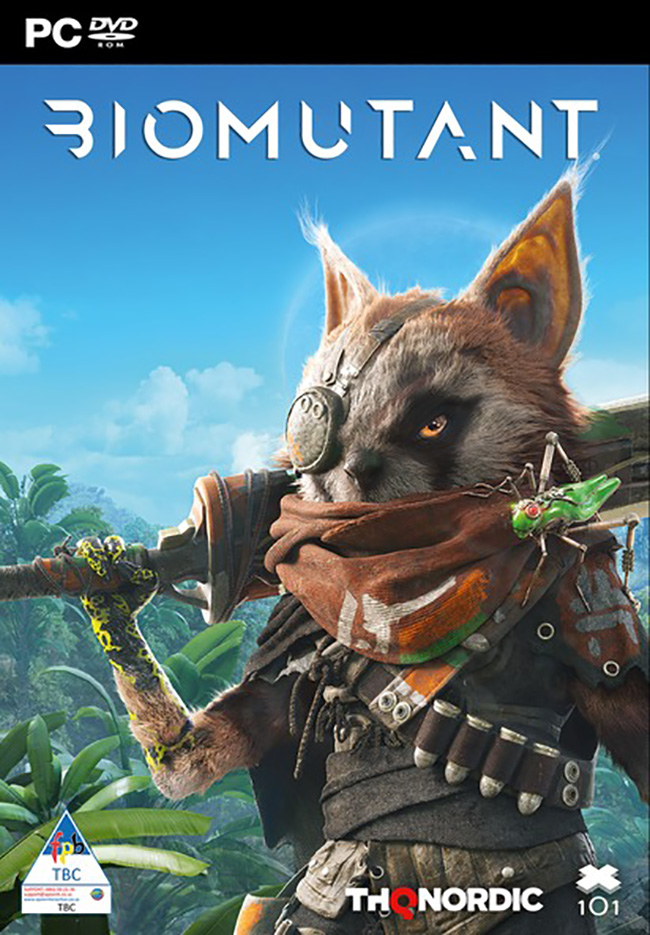