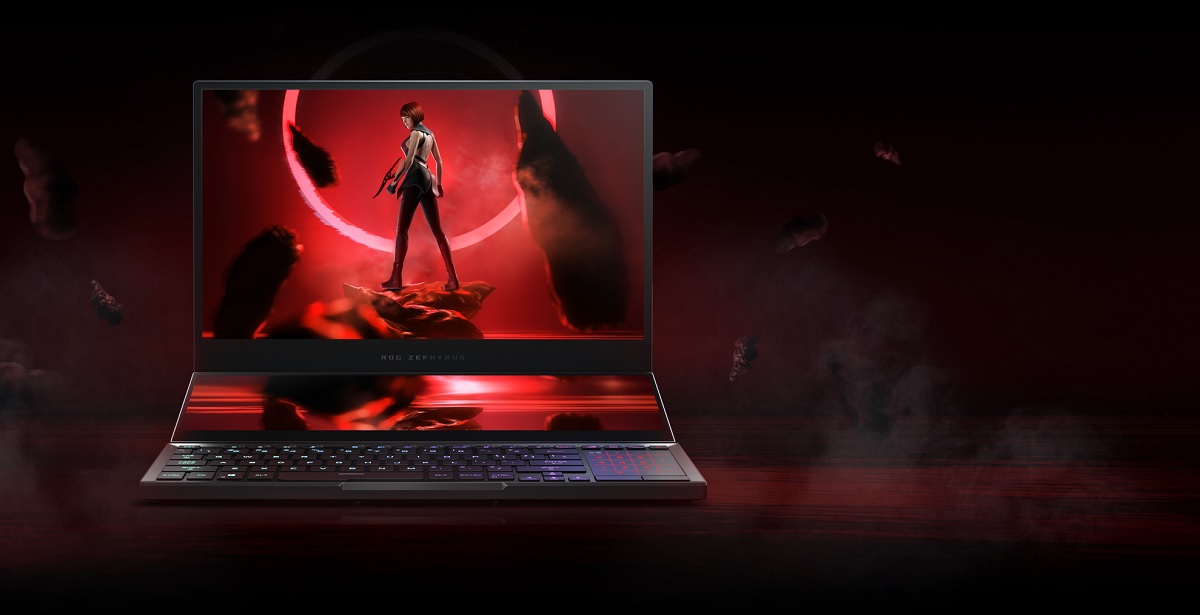 Asus has jumped to the head of the pack when it comes to innovating in the notebook space. While Razer may have been the first to concept a dual screen laptop a few years back with the unwieldy Project Christine, Asus made it practical with the release of the Zephyrus Duo in 2020.

2021 brings us a refresh of the laptop, updated with the latest components and some of the first implementations of Nvidia’s mobile RTX3000 series GPUs. 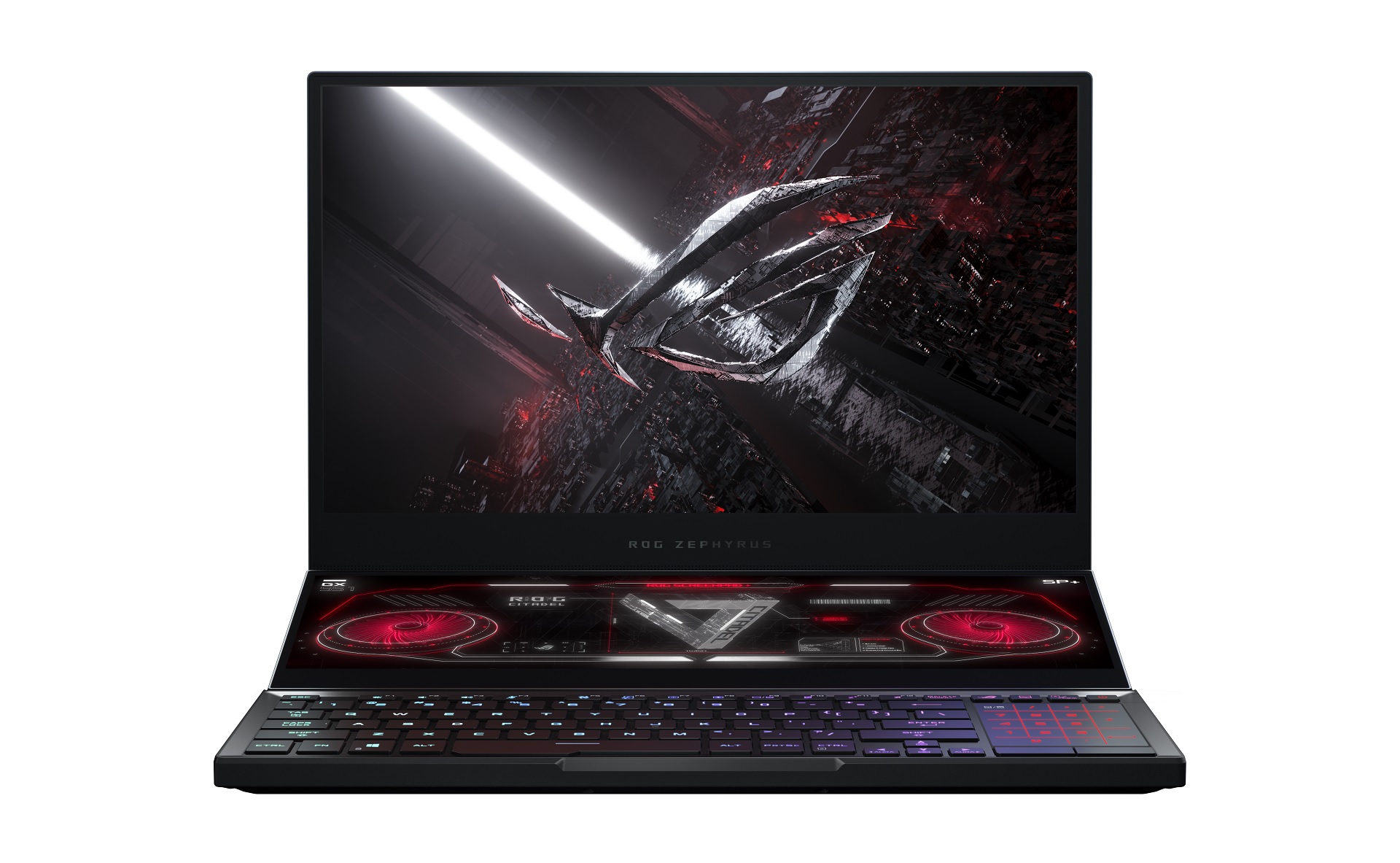 The Zephyrus Duo has not been redesigned and physically you would be hard-pressed to tell just from the shell. What has changed has been the chassis colour options giving you a bit more choice to make the laptop a little bit more “you”.

Opening the laptop reveals the second screen tilted at a 13-degree angle and honestly it's sturdy as all hell. The screen hinge is linked to the lid hinge, so mechanism so lifts at the same time without any intervention from the user. The hinge is so sturdy that Asus claims it can support the weight of a 15kg kettle bell. I did not test that claim to that extent but pushing down on the screen and it does not budge at all. Tilting the screen makes it easier to view, but this also serves a secondary and especially important purpose of improving airflow and thus cooling for the components.

The hinge is so sturdy that Asus claims it can support the weight of a 15kg kettle bell.

The primary display, a FHD 1080p display on this model, boasts 3ms response time and an eyewatering 300Hz refresh rate. Oh yeah, and it is also an Adaptive Sync display. The secondary display is the where the magic is. This smaller display is about half the height of the main display but is touch capable and is insanely useful for so many applications, something I did not think possible. Both displays can be upgraded to 4K panels, but in a laptop that is overkill.

Build quality on this laptop is exceptional, the aforementioned impossible to budge hinge on the second screen, followed by almost no keyboard deck flex and very little main display/laptop lid flex. The touch pad is decent, but due to the placement of the second screen it is in an odd position, where a number pad would normally be meaning that there is no NumPad, and it is a little on the small side. 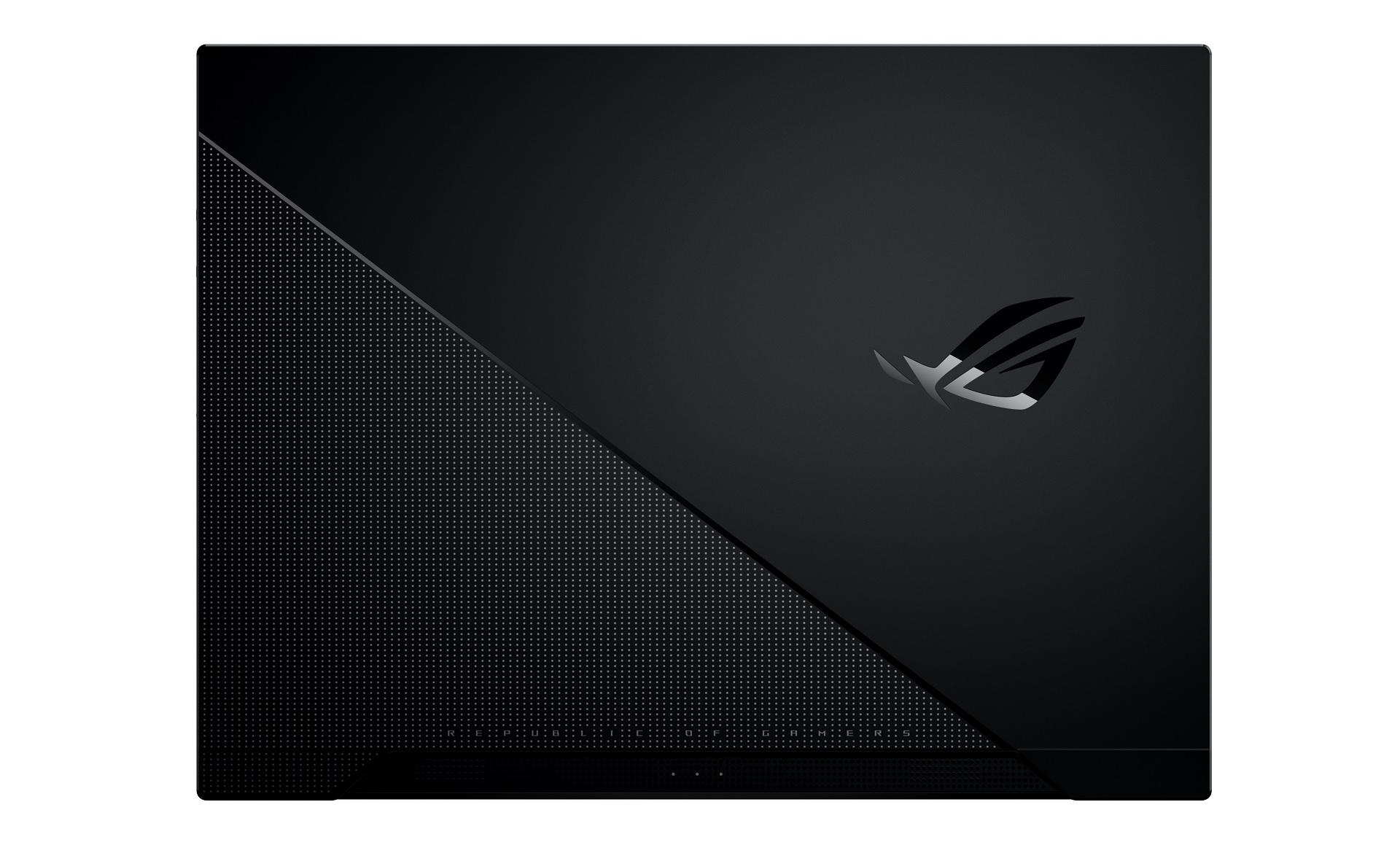 The keyboard is a chiclet style board and decent enough for daily typing and use. Key travel and actuation are one of the better laptop keyboards but for longer gaming sessions at your desk you will be using a proper keyboard. Because of the position of the second screen there is no palm rest on the laptop so without the extra magnetic wrist rest that Asus sells for the laptop it is not a comfortable long-term typing experience.

The Zephyrus Duo is a powerhouse laptop. The review unit sported a Ryzen 9 5900HX, 32GB of RAM, 1 TB of NVME storage and the real gem – a Nvidia RTX 3080. Now Asus labels the GPU as a “Max-P” GPU which is not an Nvidia approved moniker but is meant to signify that this GPU has been designed and implemented for maximum performance.

Right here is where we need to take a step back from the model numbers and look at the actual technical specifications of the GPU. The laptop GPU has more in common when you compare Cuda Cores and RT cores and all the other tech specs to the RTX 3070 desktop version than its desktop namesake. This doesn’t mean that it is not powerful or worthwhile but comparing the laptop performance to a desktop GPU would give you a misleading impression of the laptop.

The one place that this GPU does outshine the desktop version is in onboard RAM, although it does use GDDR6 instead of GDDR6X modules.

The laptop comes with a fairly comprehensive I/O being:

For a laptop meant to appeal to streamers and creatives as well as anyone working from home these days, the lack of a built-in webcam is disappointing. You can buy a separate webcam but having to carry a small peripheral around that can easily be lost or damaged in the bag is just not something in the design documents of laptops in 2021. 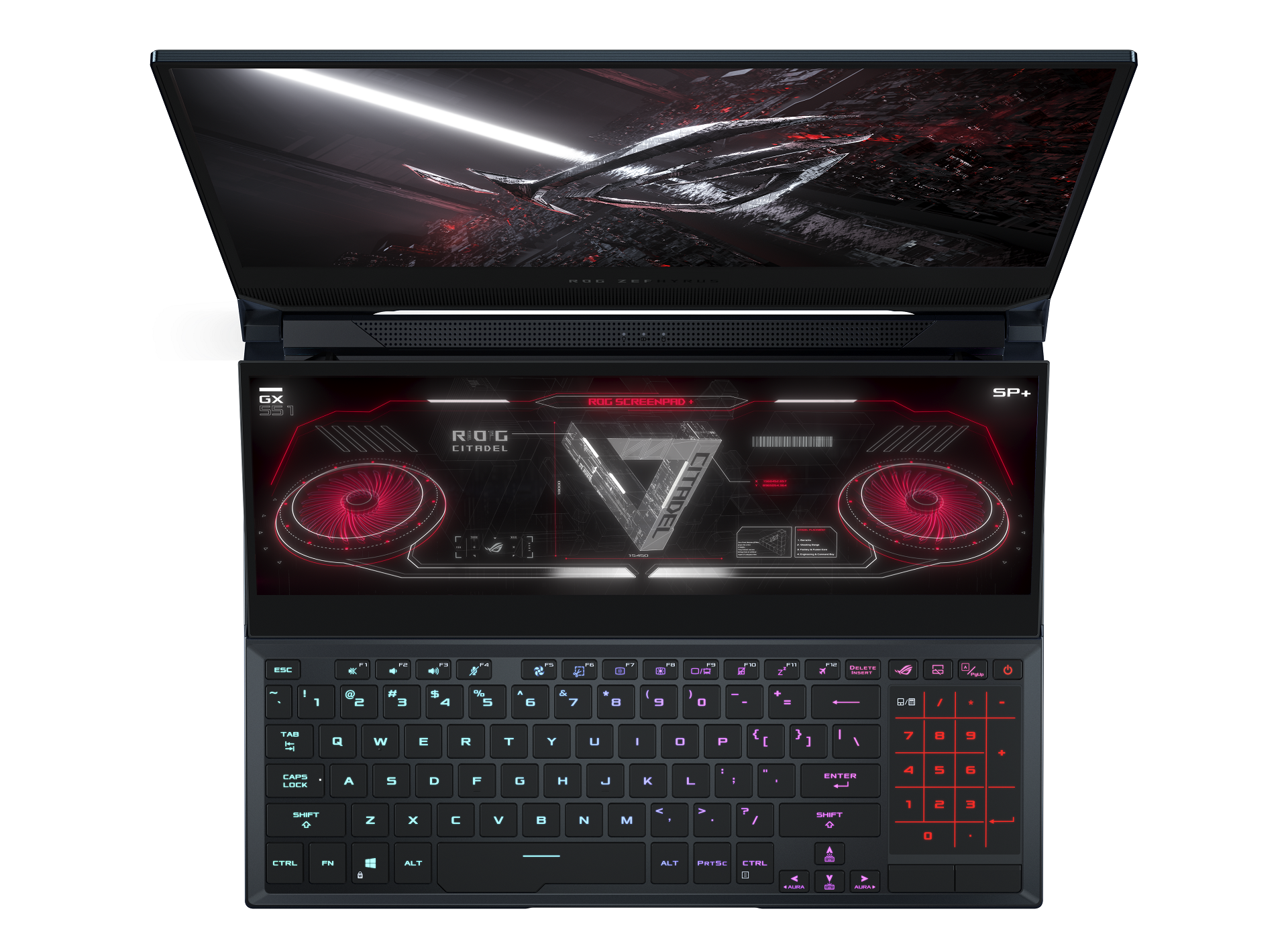 Anyone who games or works today without a second screen is a masochist. Multiple monitor setups have been proven to improve workflow for everyone from creatives to accountants (hello) and for gamers having a second screen open for Discord, Twitch, OBS or any other gaming application is a must. Up till the Zephyrus Duo a second screen laptop meant having a portable LCD in your bag. The Duo’s second screen is smaller than that sort of portable display but is just as useful. And that’s before we get into the ScreenPad+ software. Just having a second display made simple tasks so much easier.

Transferring games from my external hard drive to the internal drive for testing was easy because I could have two instances of Explorer open. Typing reviews and other work documents allowed me to have reference material open on the second screen with Word open on the main display. During the day, I could have Spotify open on that screen while other programs or games on the main display. If you can do it on a dual or triple monitor setup, you can do it on the Zephyrus. Text is clear and crisp so no need to worry about eyestrain.

Typing reviews and other work documents allowed me to have reference material open on the second screen with Word open on the main display.

ScreenPad+ is Asus’ customised application for the display, and it has some interesting and useful applications. Deadlight 2 for instance moves the inventory, mission notes and other menu items to the second screen for quick reference. Think the implementation of the Nintendo 3DS, or WiiU if you ever had one and played Zombie U or Batman: Arkham City on that console, but on steroids.

For workflow in creative apps like Adobe products, Asus has partnered with Adobe to create customisable Control Panels that put many functions and shortcuts on the screen to make on the go editing a breeze. Right now the Control Panel apps are limited but Asus is encouraging developers to contact them with ideas as to what they want to see on the system. I am not sure if they are opening the API to developers or will develop the functions and apps in house, but they are looking to add to the functionality.


Gaming, It Really is About the Gaming

If you have made it this far, congrats, you got to the real reason you clicked on this review. The TL:DR version is, if you want a gaming powerhouse this laptop is it. If you want details, here they are.

First up are the synthetic tests – Timespy Extreme gives us a very, very respectable score of 9 851 and a suggested Battlefield V setting of 1440p at Ultra which would give you an FPS “score” of 95 and above. Because the laptop is capable of raytracing with decent framerates, I finally had a chance to run Port Royale. Port Royale pushed out a score of 6 560. Pretty decent. 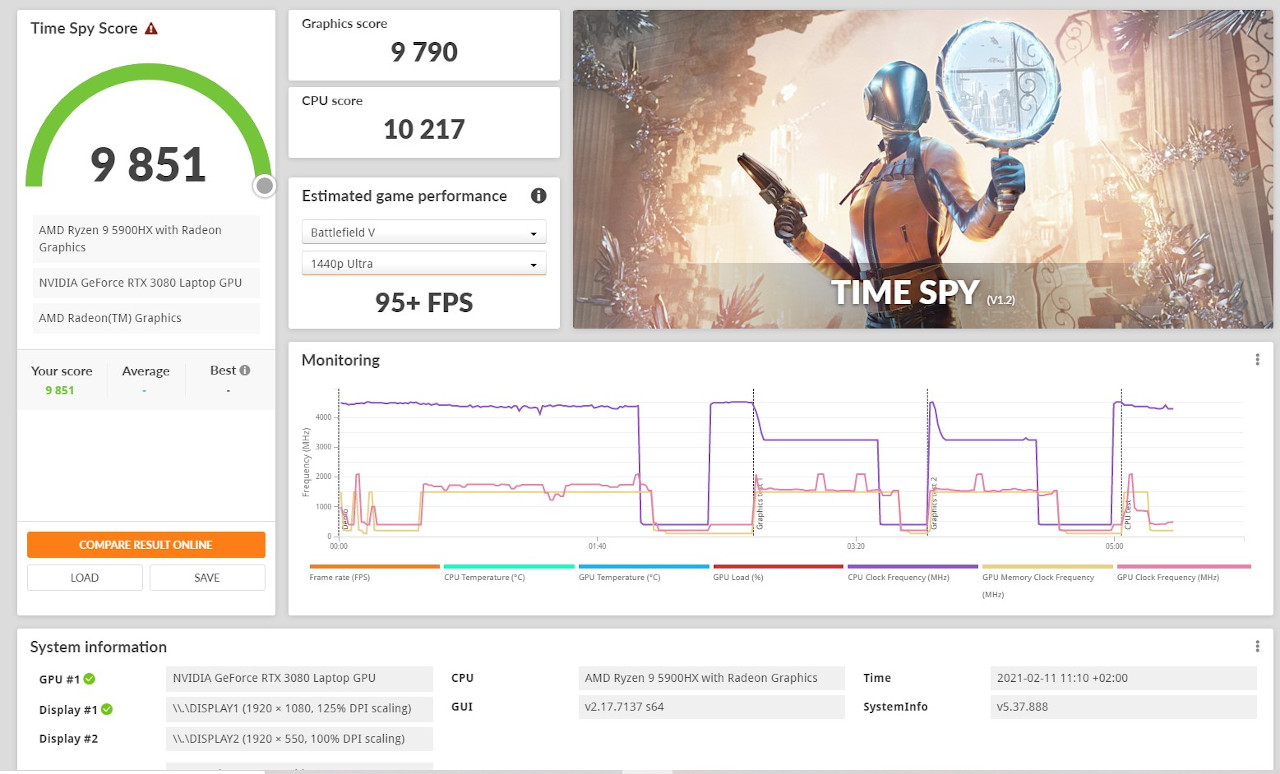 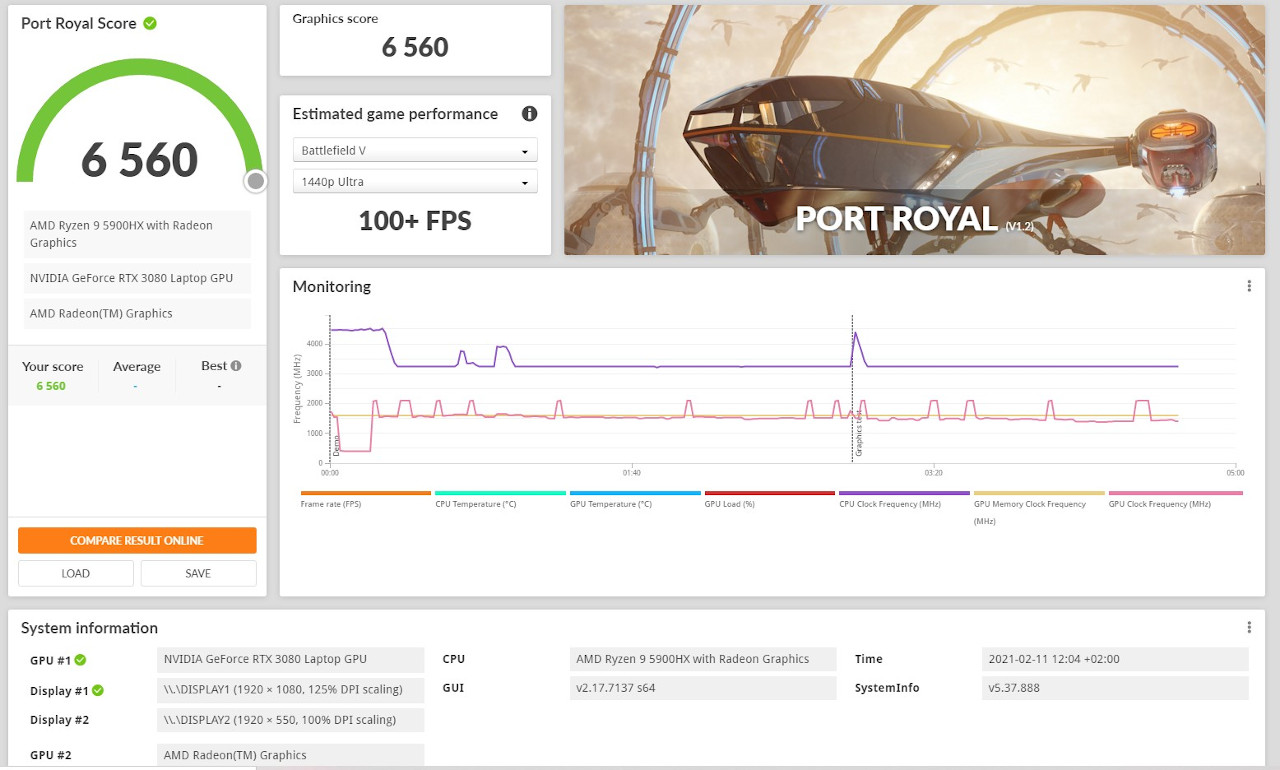 The TL:DR version is, if you want a gaming powerhouse this laptop is it.

Running Shadow of the Tomb Raider and The Division 2’s in-game benchmarks pushed the machine but impressively the average FPS was 110 and 116 FPS respectively. These are games that can really push hardware, especially The Division 2 so to get triple digit average FPS is truly impressive. 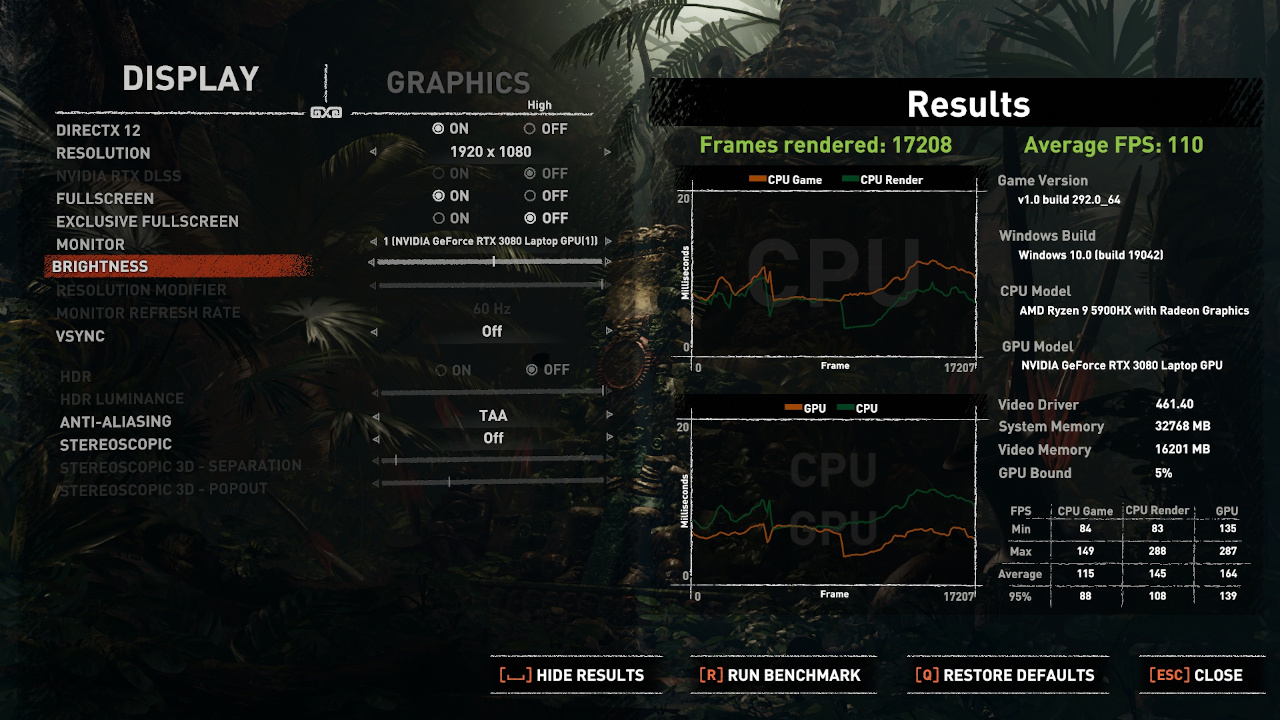 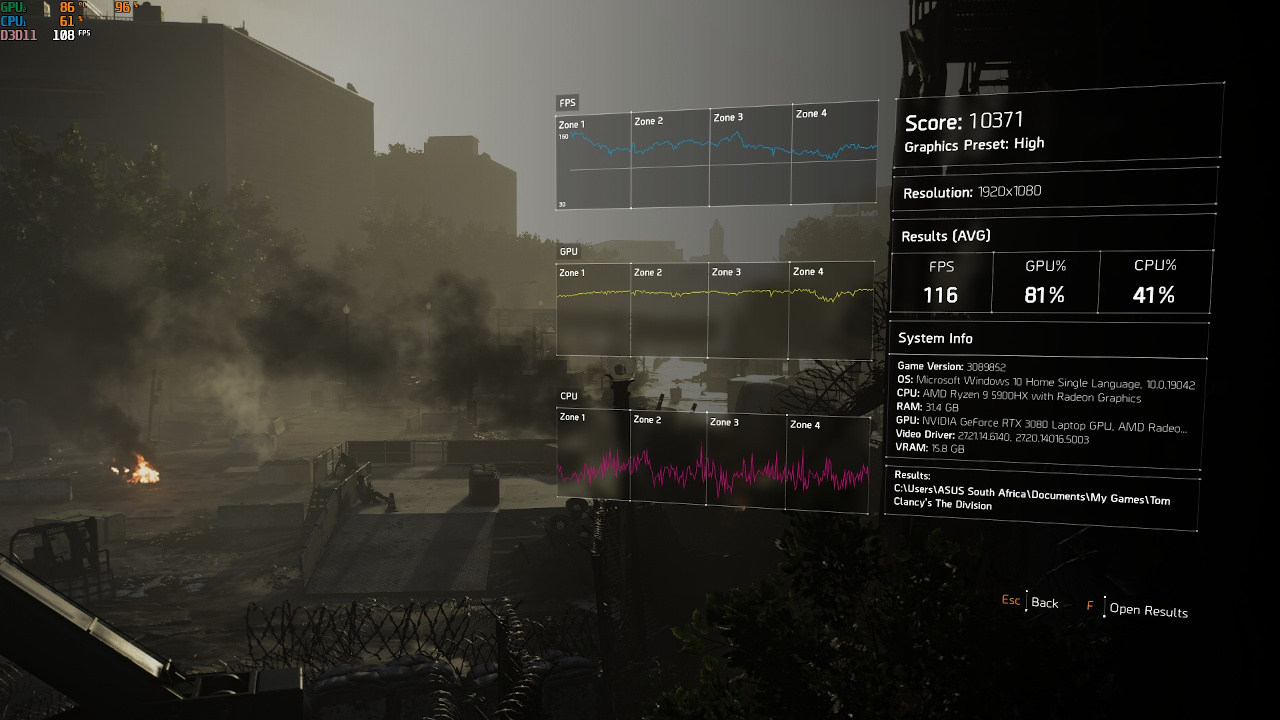 To thoroughly test the machine I played a fair amount of The Division 2 and Control. The former because framerates are important for peak player performance, and the latter to stress the laptop when trying the ray tracing capabilities. 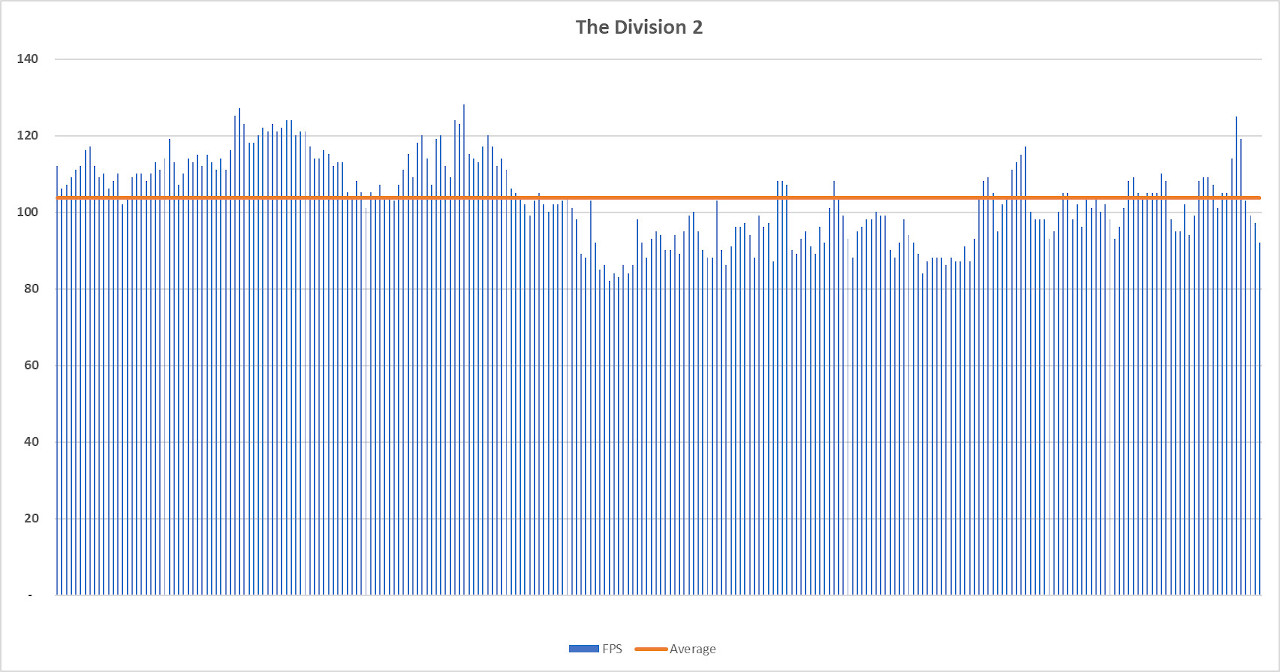 In The Division 2 at max settings the game averaged 104FPS with occasional dips to just below 100. This is impressive performance in a laptop. Control I ran first without RTX and DLSS on at max settings and again the laptop blew me away averaging 138FPS and only dipping twice to 98FPS overall. Same settings but with ray tracing set to max and DLSS on – no problem. The game averaged 93FPS with occasional dips to the mid-60s. What all this testing had in common was that the games did not stutter and degrading the gameplay experience. It was smooth gameplay all the way. 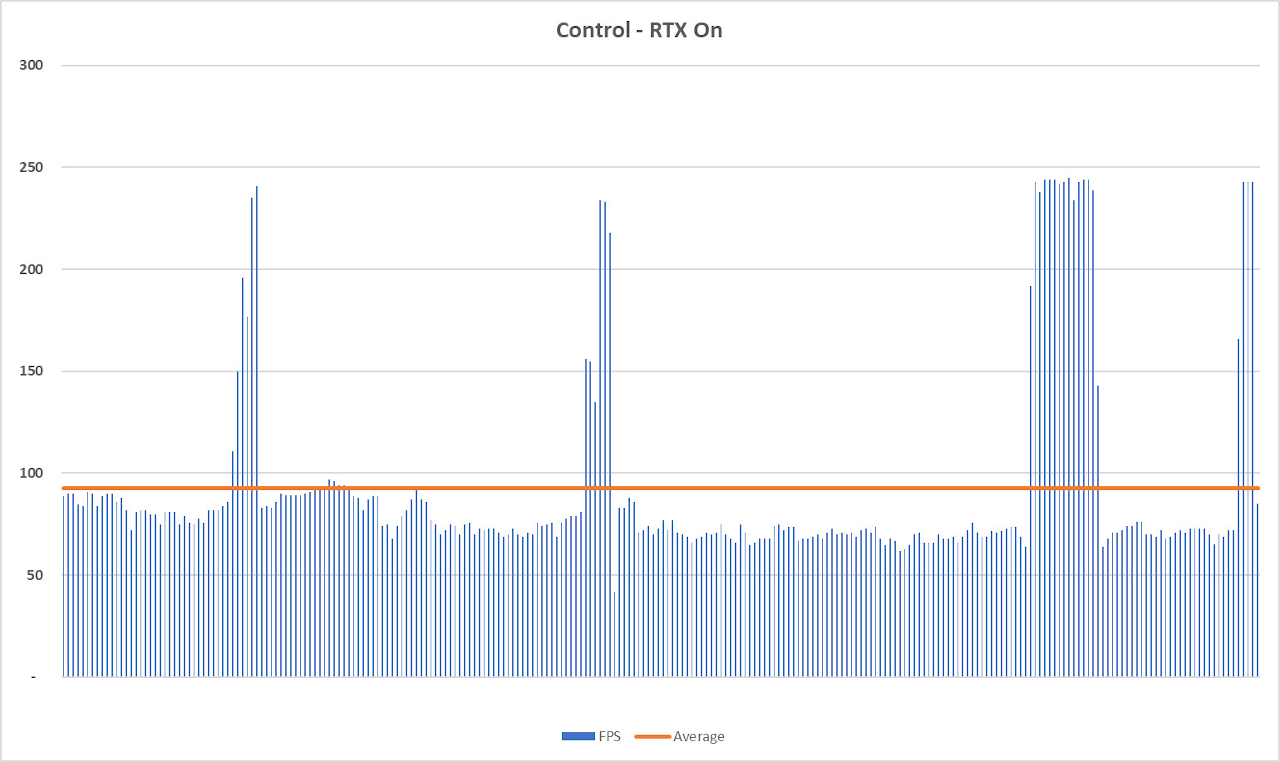 In terms of thermal performance and acoustics, the laptop fans, despite the redesign to be quieter, do get loud under load. Not distractingly so, but noticeable. In terms of thermals, that extra airflow provided by the raised second screen and the fans keeps everything within thermal limits. Looping Heaven for 30 minutes and the GPU and CPU hit the 80s well below their thermal throttle limits. Overheating and thermal throttling are not something to worry about.

The Asus Zephyrus Duo is an exceptional laptop. The industrial design does not cream “gamer” but is premium and attractive. Married to impeccable engineering for the hinges and second screen and thermal dissipation makes it a functional laptop that will exceed expectations. And that second screen is the cherry on the top adding functionality and a talking point to an already impressive package. If you are in the market for a gaming laptop that will be useful at work, the Zephyrus Duo is definitely one to consider.
9

The ScreenPad+ and Control Panel software

Powerhouse for gaming and processing