Execs will flip for this. 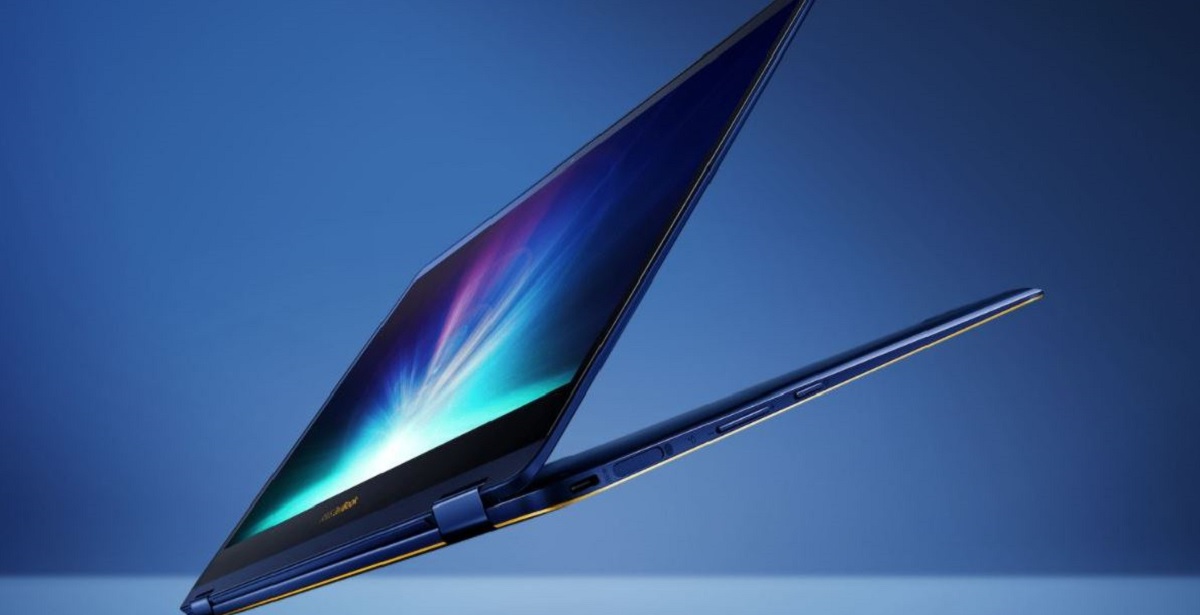 Ever since Apple announced the iPad, tech geeks and productivity “experts” have been falling over themselves imagining how it would revolutionize laptops and productivity. Apple themselves have half-heartedly tried to make the iPad a laptop replacement, but it is never quite worked and even Microsoft’s excellent Surface line of Windows tablets must be used with their keyboard covers to be truly effective as a laptop/tablet hybrid. The next best solution is to create a touchscreen laptop that folds in half and switches to a tablet mode.

The Asus Zenbook Flip S is just such a laptop but is not a simple black business box. Oh no, this is a premium laptop with care taken in almost every aspect of the industrial design. On the outside the lid is adorned with a simple Asus logo, but embossed in copper. Around the edges of the lid and the deck is a copper strip to accent the aluminium materials. The lid features a brushed pattern, but no ordinary pattern haphazardly placed on the lid. Instead, the pattern is a series of concentric circles like the rings of a tree and the Asus logo is placed dead centre in the pattern. This is exquisite attention to detail and makes it clear that the laptop is aimed at the executive who cares about appearance as much as function. 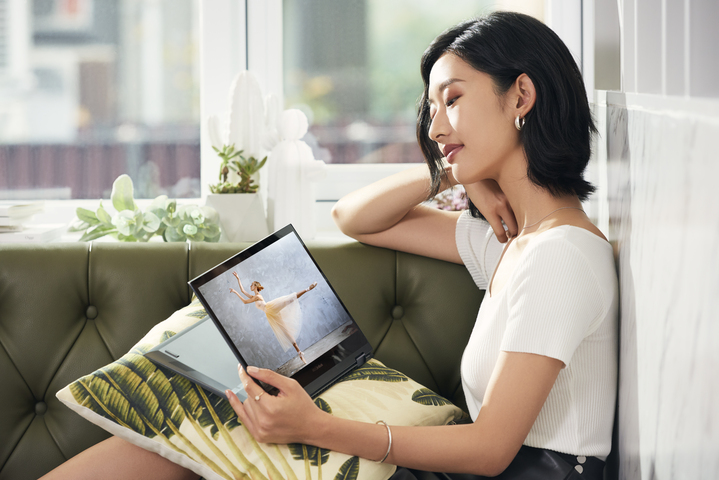 Unfortunately, the attention to detail and premium materials does not extent to the underside of the chassis which looks and feels like plain old plastic instead of a unibody aluminium or magnesium design. This is a curious oversight by the design team and was likely a cost saving measure, but this is a premium ultrabook and cost should not matter as much as form since any buyer is already paying a premium. The hinge design is suitably stiff, maybe too stiff out the box. For a thirteen-inch laptop I could not raise the lid one-handed. Maybe this will ease over time and use and because the lid flips back for tablet mode it needs to be as tight as it is.

...the laptop is aimed at the executive who cares about appearance as much as function.

Opening the ultrabook reveals a gorgeous OLED screen that is near borderless. The 13.3-inch touch screen boasts a 3840x2160 resolution. Yep, it's 4K on a laptop; especially with such a small screen, that’s overkill, but there is a compelling use case. The OLED screen is as you would expect gorgeous to look at, but the trade off in power consumption may not be something many are willing to give up. Luckily the USB Type C charging port and tiny power brick make it a cinch to charge on the go without adding too much bulk to your bag. As a touch screen it is easy and simple to move between touch and using keyboard and mouse as inputs. Steve Job’s fears of “Gorilla Arm” were overblown. 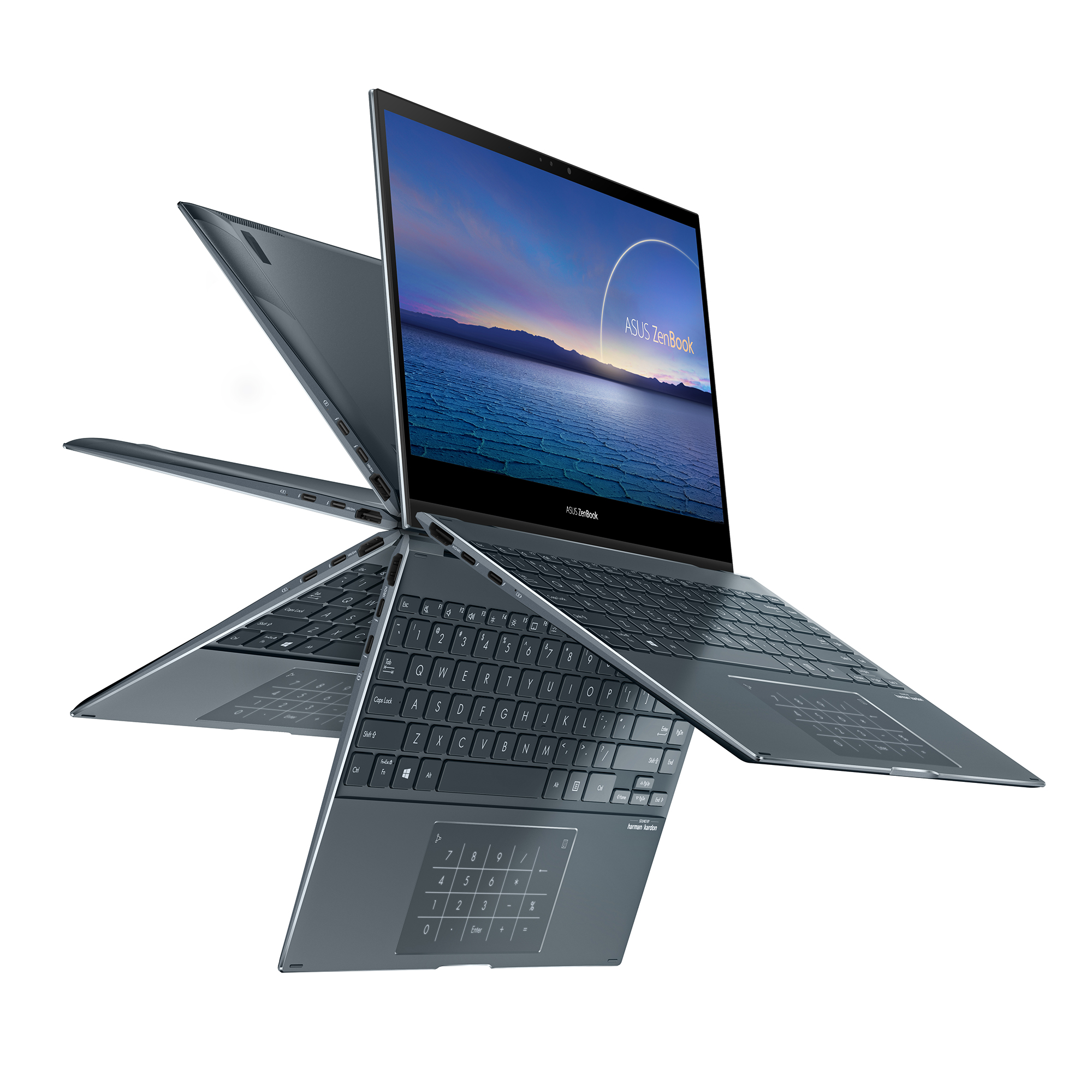 The keyboard is a lovely and chiclet style keyboard and even for this mechanical switch snob, a pleasure to type on. The short travel distance on the keys and decent size did not lead to many errors and after a few minutes I was used to using this keyboard. Sadly, for such a small keyboard there is no Num Pad. But there is. Looking carefully at the decent, but not spectacularly sized track pad you will see a white symbol printed on it. Press once and it lights up with a fully functional touch Num Pad that still operates as a touch pad in this mode. To be fair it is a nice feature, but lacks the tactile feedback of real keys, membrane though a laptop keyboard may be and so I found that you cannot use it as a touch type pad as many of us are used to.

In terms of build quality, the screen shows little flex, and the keyboard is impressively sturdy. The palm rest areas do not flex ensuring that there are no accidental left and right clicks on the touch pad. The touch pad is a responsive one with excellent multi-touch recognition, but it is on the small side. MS and Apple have shown the way with their large comfortable and frankly world beating track pads on the Surface Book and Mac Book lines, respectively. The other laptop manufacturers have to start catching up in this department.

The palm rest areas do not flex ensuring that there are no accidental left and right clicks on the touch pad.

As a smaller laptop the I/O is limited but not so much that you will be disappointed. It comes with 1 USB 3.2 Type A, TWO Thunderbolt 4 ports on either side of the laptop and both support charging and display output. Having one on each side means that you can choose whichever port is most convenient for your mouse hand and closest to a wall outlet when you need it. Included is 1 full size HDMI 1.4 port. Sadly there is no Ethernet jack so you will have to make do with the excellent Wi-Fi 6 or carry around a USB to Ethernet adapter. The system camera is fine for most remote calls but does feature Windows Hello support to make unlocking the system a breeze. 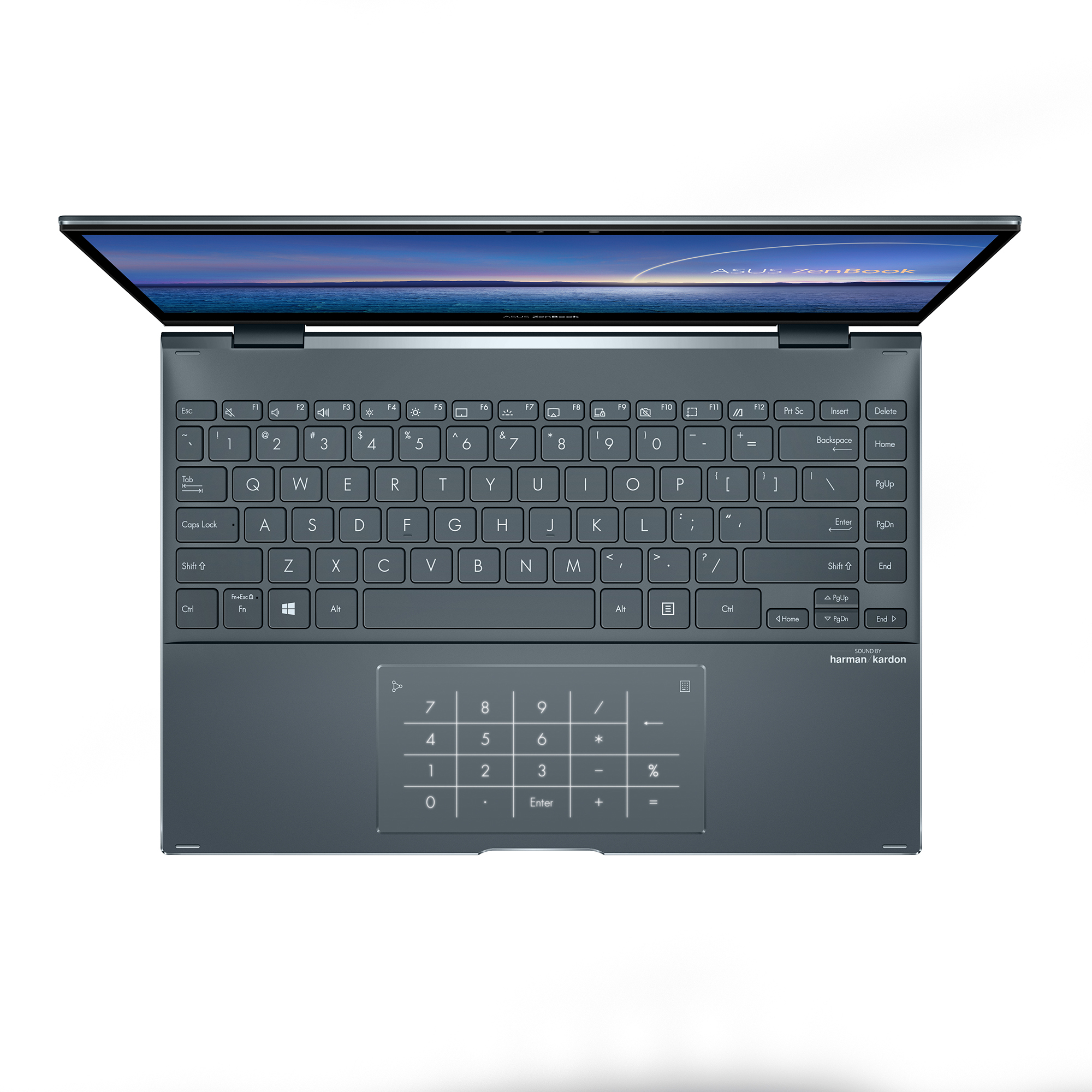 To test this machine, I had to forgo my usual battery of 3DMark and game tests since this is not a gaming laptop given that it relies on Intel’s integrated Xe graphics. That is not to say that you can’t game, you can do some light gaming with esports titles like Rocket League, CS:GO and maybe Fortnite at lower settings to achieve frame rate stability. Even with a capacity for up to 1TB in the form of an M.2 drive I doubt that the purchaser of this ultrabook is going to gaming on it that often.

Instead, this is a sleek productivity laptop and in daily use of Word, Excel and web browsing and emailing, it is brilliant with a brilliant battery life. That 4K screen is particularly useful for all those Power Point presentations that will be built on it and the clarity and colour accuracy of the screen make things “pop” more than ever before, enabling you to choose just the right colour for that graph to convey your triumphs. And this is where the OLED screen comes into play – anyone needing to do colour correction in videos and photos. If you are an editor and need to edit on the go, even simple edits just for preliminary pitch purposes, the extra cost of the OLED is worth it. And do not worry about processing power; the Flipbook S sports Intel's latest 11th Gen Core i5 or i7 (our review unit had the i7) so it's more than capable. Couple that with up to 16GB LPDDR4X memory and the ultrabook will do just fine. 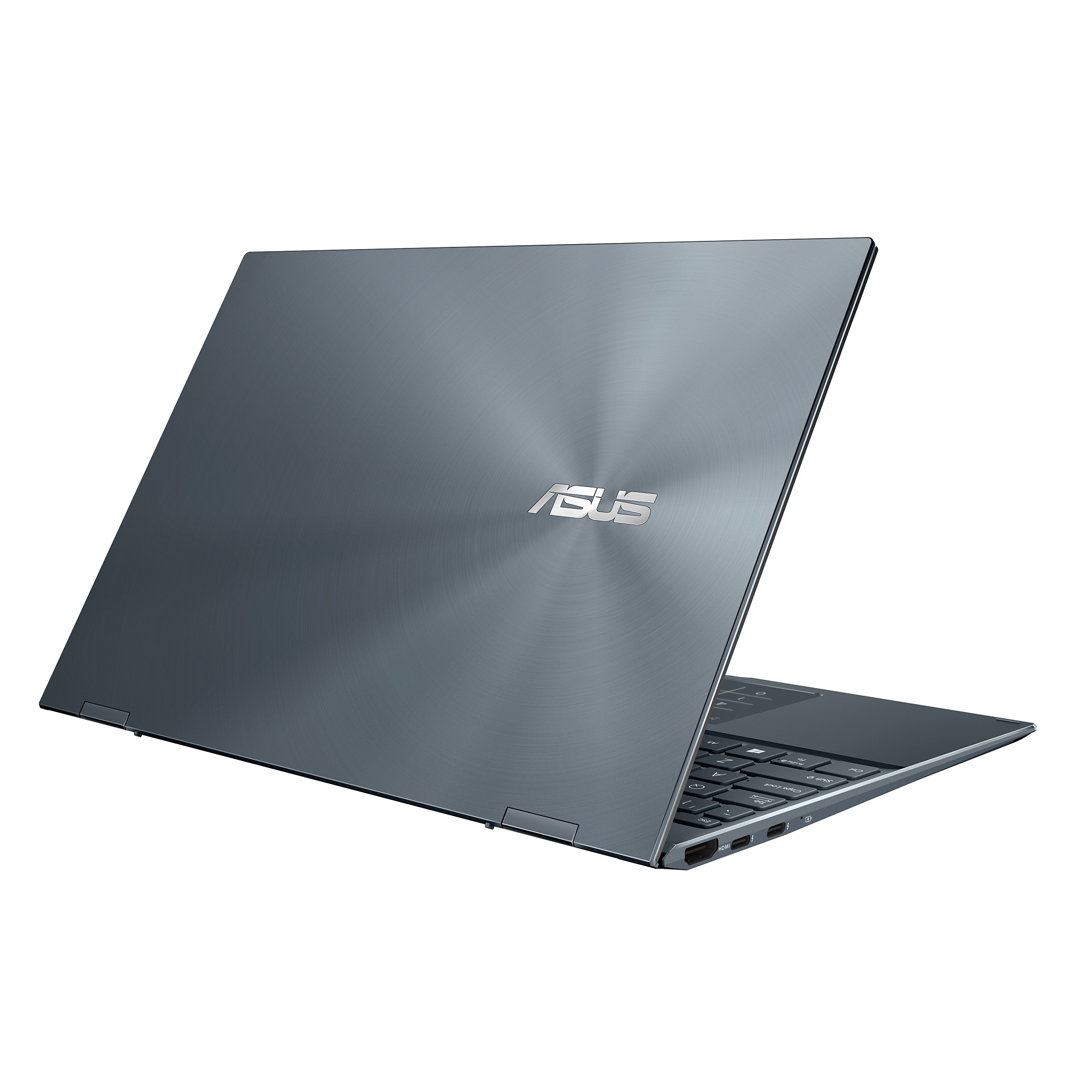 What makes the Flipbook a serious consideration for any space conscious executive is the tablet mode. Windows 10 is an excellent tablet OS and because it is Windows 10 when coupled with OneDrive it works seamlessly with your workflow without having to worry about compatibility issues. Using the optional stylus in photo editing was a revelation as being able to accurately use the airbrush tool made touch ups simple. It was also a great tool for adjusting sliders and just general editing. As a pen, the writing recognition was good if not always accurate and the screen palm rejection worked nearly flawlessly. There was not once where I had to lift my palm into an unnatural position to ensure all intended inputs were recognized. Being able to use the pen to annotate and sign PDFs is a gamechanger.

I tried using the tablet mode as a content consumption device, but found that the size and the weight of 1.2kgs was a bit too much for a comfortable reading experience. However if you use the laptop on tented orientation it’s a decent sized screen with great resolution for YouTube or shows over breakfast.

Being able to use the pen to annotate and sign PDFs is a gamechanger.

The ASUS Zenbook Flip S is a competitive and attractive alternative to Lenovo’s Carbon series of touch screen ultrabooks. The build quality needs some work in respect of the materials used, but it is a sturdy system. If you don’t do any colour accurate work, I would save cost and battery life and opt for the 1080p FHD screen over the OLED. The biggest criticism I have is minor but is potentially annoying as heck. The stylus is comfortable and feels like a pen, however it does not dock into the ultrabook like the Lenovo ones do and is not magnetic like the MS pens are so I can see many people at best ignoring it or losing it in the bags, making it nice to have but ultimately something that will get little use.
8.5

Touch Pad is a tad small

Pen is next to useless

Not that comfy on the couch as a tablet