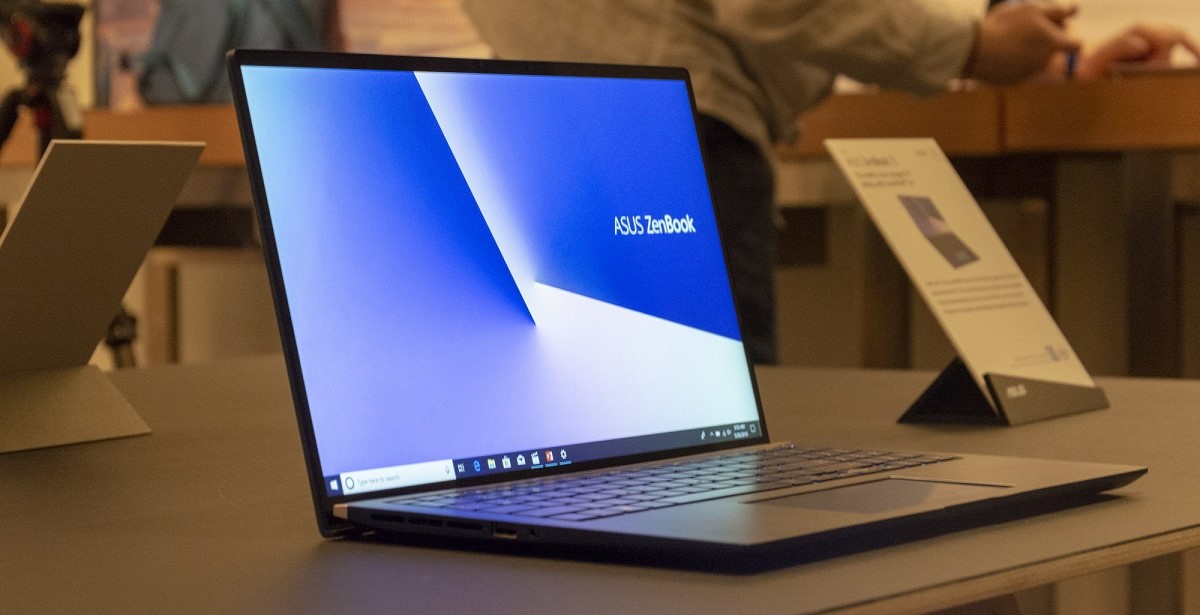 Asus recently unveiled their dual screen range of laptops this year, but many have focused on the Zenbook Pro, with its awe-inspiring 4K secondary screen. That is definitely for good reason, but I don’t think people should overlook the Zenbook 15.

This is an impressively compact laptop that packs more punch than you would think at first glance, thanks to the 8th-generation Intel i7 and Nvidia GTX 1650 Max-Q GPU. In fact, two weeks into testing and I still couldn’t believe just how much can be packed into something so small, and still be more than functional.

This is an impressively compact laptop that packs more punch than you would think at first glance, thanks to the 8th-generation Intel i7 and Nvidia GTX 1650 Max-Q GPU 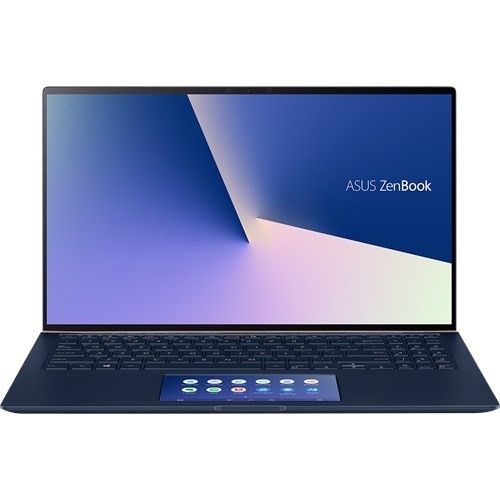 The Zenbook is as sleek and elegant as a modern ballroom dress, with subtle gradients in the colour that give off a more pristine finish. The Royal Blue paint job, sprinkled with gold accents make the Zenbook a fingerprint magnet, but it’s definitely worth the pain of giving the notebook a good wipe after each usage. It's simply gorgeous. That being said, the dainty colouring of the notebook is matched with a rather robust build. For something so lightweight, the notebook has little-to-no flex on the chasis and the Ergo-Lift hinge feels sturdy enough to not give you anxiety when opening the laptop in public. 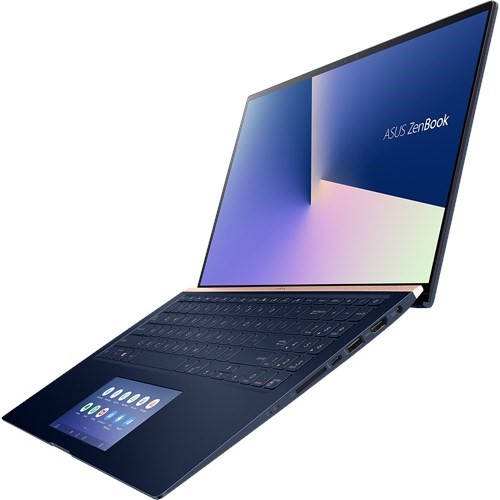 As for the form factor, there really isn’t much to complain about. The Asus Zenbook 15 is impeccably lightweight and just as thin. Carrying the notebook around won’t be a problem for those who travel often, as it takes almost no space and has a travel-sized power adapter.

The Zenbook is as sleek and elegant as a modern ballroom dress, with subtle gradients in the colour that give off a more pristine finish

To put it simply, this notebook is gorgeous and will definitely turn heads on looks alone. However, it’s not the only aspect of the notebook that will turn heads. The Zenbook 15 sports - among many other things - a secondary display. The secondary display also acts as a mousepad and boasts touchscreen functionality.

The idea of a rather small secondary display may sound like a gimmick, but I found that not to be the case during the testing period. The secondary screen is a FHD 1920x1080 display, so it’s not something to just forget about. I used the display to watch movies, browsing the web, and general productivity, but that was just to have more space on my primary screen. It never once felt like it was the lesser of the two screens, but the size did impact reading certain forms of text.

The secondary screen is a FHD 1920x1080 display, so it’s not something to just forget about

Thankfully, it does make multitasking a breeze. Within the first day of using the Zenbook 15, it really becomes hard to imagine a life without a secondary mousepad-sized screen. It’s just small enough for you to still have a full-sized chiclet-style keyboard, but big enough to make sure you’re not squinting your eyes every time you use it 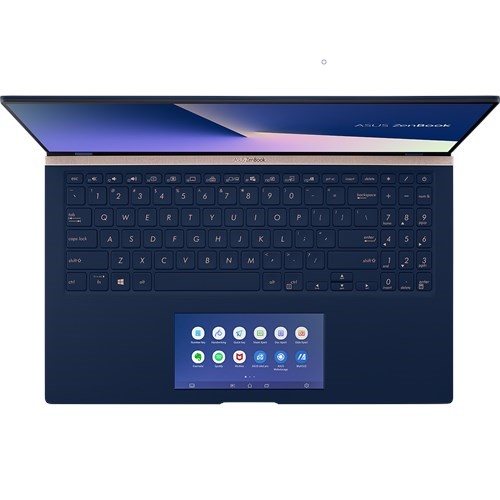 The screen serves as more than just a reason to up the price. Much like a garden tool is an extension of a gardener’s hand, the second screen is an extension of the Zenbook’s functionality. It opens up new forms of multitasking on the go, that was never even considered in the past, outside of physically carrying a second screen with you wherever you go. Sure, you could argue that the secondary screen isn’t necessary, but that’s not the point. The second screen marks an innovative turn for the future of notebooks. The quality of life improvements that come from having that secondary screen are just too grand to ignore. Only after being without the notebook for a few days, did I start to notice how much I missed the second screen it offered.

What’s the drawback, you ask? Well, there really aren’t any. The battery life is decent, with our testing getting between 4-8 hours of usage on a single charge. It was pretty heavy usage too. For those who fear how much battery the secondary screen will drain, you can always lock it into mousepad mode, or simply reduce the resolution and brightness. Then again, why wouldn’t you want to use the screen after spending so much on the notebook?

That being said, this isn’t exactly a gaming orientated laptop. The Zenbook 15 comes with a 1650 Max-Q, but it was made with productivity in mind. If you’re a creative on the go, definitely put the Zenbook 15 on your shortlist. The notebook will handle almost every productivity-based task you have with ease, and even handle some light gaming. Even while doing some CPU intensive tasks, the Zenbook 15 gave me the confidence to continue without wondering if I would run into any stutters or lag of any kind. 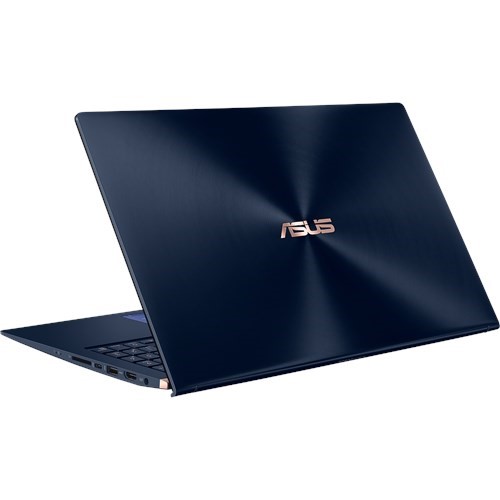 That being said, this isn’t exactly a gaming orientated laptop. The Zenbook 15 comes with a 1650 Max-Q, but it was made with productivity in mind. If you’re a creative on the go, definitely put the Zenbook 15 on your shortlist

Not once in my entire testing period did I feel like the Zenbook was missing something. The primary display is almost besselless and sports some clear imagery, boasting 100% sRGB color gamut. For such a small notebook, Asus managed to fit a lot of screen in the given space.

Alongside all of that, there’s a decent set of speakers somehow slotted in. It’s enough to fill up a small room with clear audio, and the bass provided by the included subwoofer does a decent job of hitting the right lows. It definitely doesn’t disappoint, but you’re probably going to use headphones for most audio-related activities. Thanks to the aforementioned audio jack, you can secretly watch movies on your secondary screen with ease. People may wonder why you’re staring at your mousepad with a blank expression on your face after a few minutes.

The amazing build quality, beautiful design, and fantastic secondary display are more than enough of a reason to fall in love with this notebook 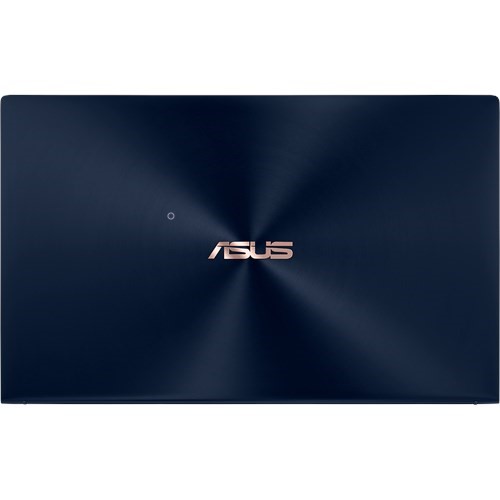 The Asus Zenbook 15 is a jack of all trades and master of some type of notebook. The amazing build quality, beautiful design, and fantastic secondary display are more than enough of a reason to fall in love with this notebook. While some may see the secondary screen as a gimmick, it takes productivity to the next level.