Not a TUF sell. 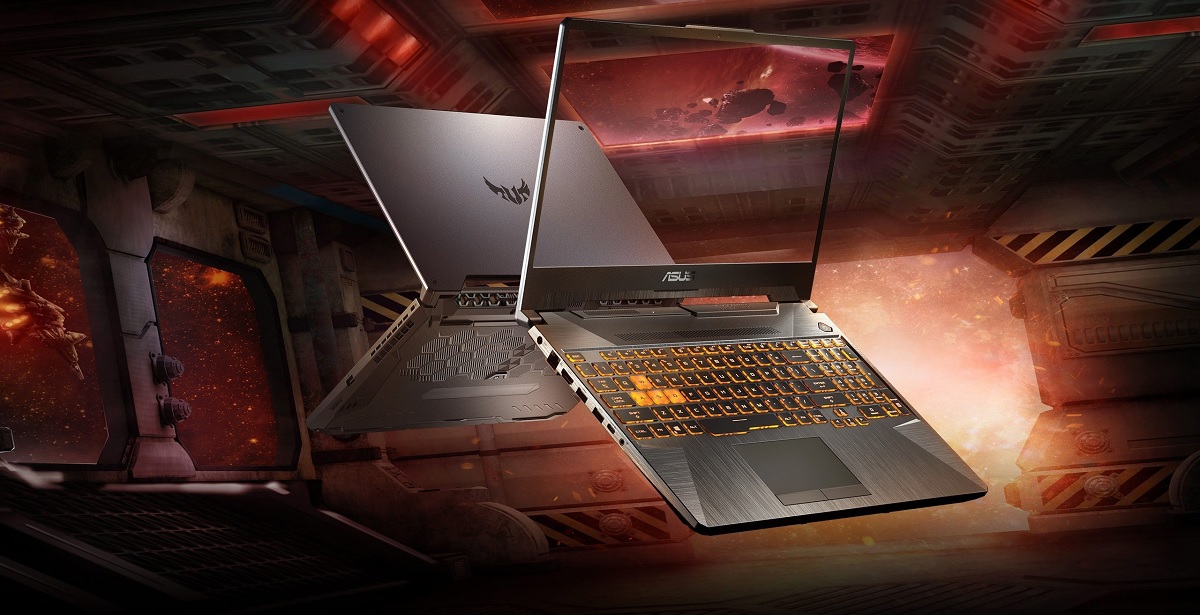 ASUS’ TUF line-up of gaming hardware is advertised as their rugged line, made from military grade components and designed to be durable in most conditions. In reality it appeals to the gamer who doesn’t necessarily love the sometimes over the top branding and RGB of the ROG line and for gamers who like to watch their budgets, it can be a slightly less expensive option. I say slightly less expensive because the TUF line is not a budget line, but one that saves costs by not being flashy.

The A15 is targeted at gamers on the go, the specs leave no room for argument there. But as has become standard for this line, the industrial design eschews that “GAMER!” aesthetic. The chassis is a simple aluminium with the lid sporting a stylised, yet understated design reminiscent of armour cases as it looks like there is a metal plate riveted to the lid. In fact, the plate is simply part of the lid and the rivets are just accent pieces. The TUF logo looks quasi-militaristic, like a unit patch from The Division. Again, eschewing publicity, the logo does not light up when the laptop is powered on. 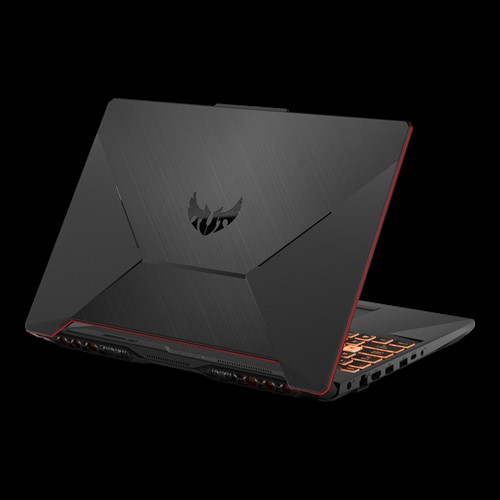 Once you lift the lid - one-handed lift by the way - you get a sense of the gamer target as the “WASD” keys are clear and every key is underlit by per key RGB. I hate RGB, I think that for most people there is no use case and that it is just another way for companies to justify their sometimes-ridiculous pricing. However, when it comes to keyboards I have come to appreciate the customisation as being able to change the colour of keys to suit their function for a specific program makes it easier to train yourself to use shortcuts or just to find that key when you forget which one does what. The keyboard itself is well built with very little deck flex when pressed and while I didn’t get used to the smaller keys, the short travel was appreciated and I would say that the keyboard is good, but not spectacular.
On that subject I do think that ASUS should consider dropping the number pad on the right as the laptop is a fifteen-inch laptop and to cram a number pad in means that the other keys are closer together. With long term use you will get used to the smaller and closer set keys, but initially I found myself making too many typos. 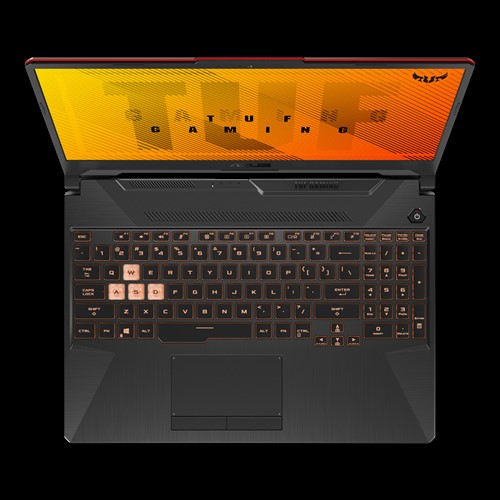 Below the keyboard is a good track pad. I did not experience any problems with palm rejection when typing or accidental clicks when pressing on the areas of the chassis around the pad, but it is a bit small. When Apple’s smaller Macbook and MS’ similar sized Surface laptops manage to give you generously large track pads, other manufacturers can too. The final mark of a quality build is the flex when lightly twisting the lid/screen. I am glad to report that the flex is not egregious and that the A15 lives up to the TUF model designation.

The model I was sent to review contained the following go faster bits:

All in all, the A15 packs some impressive hardware into a tiny package.

Impressive hardware when put together leads to some extremely impressive performance. First up were the synthetic tests. Running Unigine Heaven to test thermal performance led to an impressive average FPS on Ultra settings of around 120FPS. Not that all surprising given that this is a DX11 test and the GPU involved. However, the thermal performance of the GPU (as reported by HWINfo) after thirty minutes of a looping run was very impressive, peaking at 89 degrees centigrade. This speaks to the impressive thermal solution. I will however caveat that with the note that when the fans ramp up, you will know about it. At full load, this sucker is loud, but some tinkering with the fan curves will nicely balance thermal performance with noise. However, if you are gaming, even on the go, you are likely going to be using a headset, so the fans won’t bother you.

At full load, this sucker is loud, but some tinkering with the fan curves will nicely balance thermal performance with noise.

I did run 3D Mark’s Timespy, but because I run a custom benchmark by removing the initial cinematic run the application does not give you a score. I discovered this after sending the laptop back to ASUS (yes, we don’t get to keep these items) so I couldn’t rerun the benchmark. What I can report is that the laptop was impressive in the test and averaged close to 38FPS in the test with temps reaching about 90 degrees Celsius on the GPU and about 80 degrees Celsius on the CPU.

Running benchmarks in the following games threw up one odd result, but three impressive ones.

First up was Rise of the Tomb Raider, an old game, but one with a graphics engine that can be taxing on newer hardware. The laptop performed admirably giving an overall average FPS of 86.43FPS and on the mountain with the impressive hair simulator going full bore the benchmark showed an average of 101.91FPS. 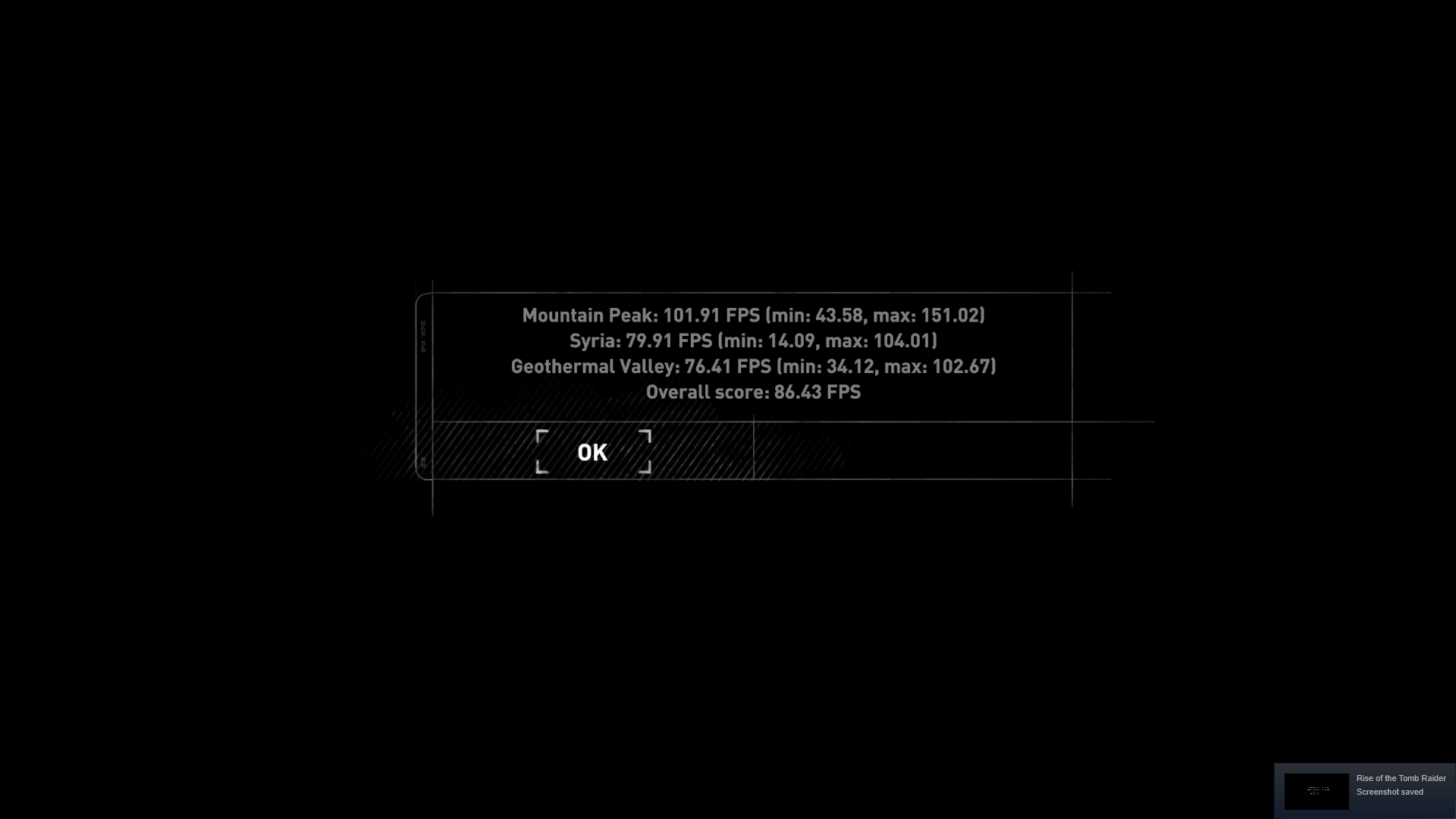 The second one I ran, which threw up a curious result, was the Decima Engine benchmark in Horizon Zero Dawn. If you look at the screen capture you will see that the game chose the integrated graphics on the Ryzen 4800H instead of the RTX2060. I tried forcing Windows to use the RTX2060 via the NVIDIA Control Panel but it just wouldn’t happen. However, what is exceptionally impressive is that using the IGP, a game as beautiful and demanding as this one still managed to hit an average of 61FPS with a max of 118. Looking at the graph you can see that the framerate was not consistent but did not dip below 30FPS. For an IGP to perform so well outside of e-sports titles such as CS:GO is mind boggling. If you are going to be playing on the go and forget your charger or there isn’t a power outlet, this shows that gaming on a lower power draw IGP is not only possible, but desirable. 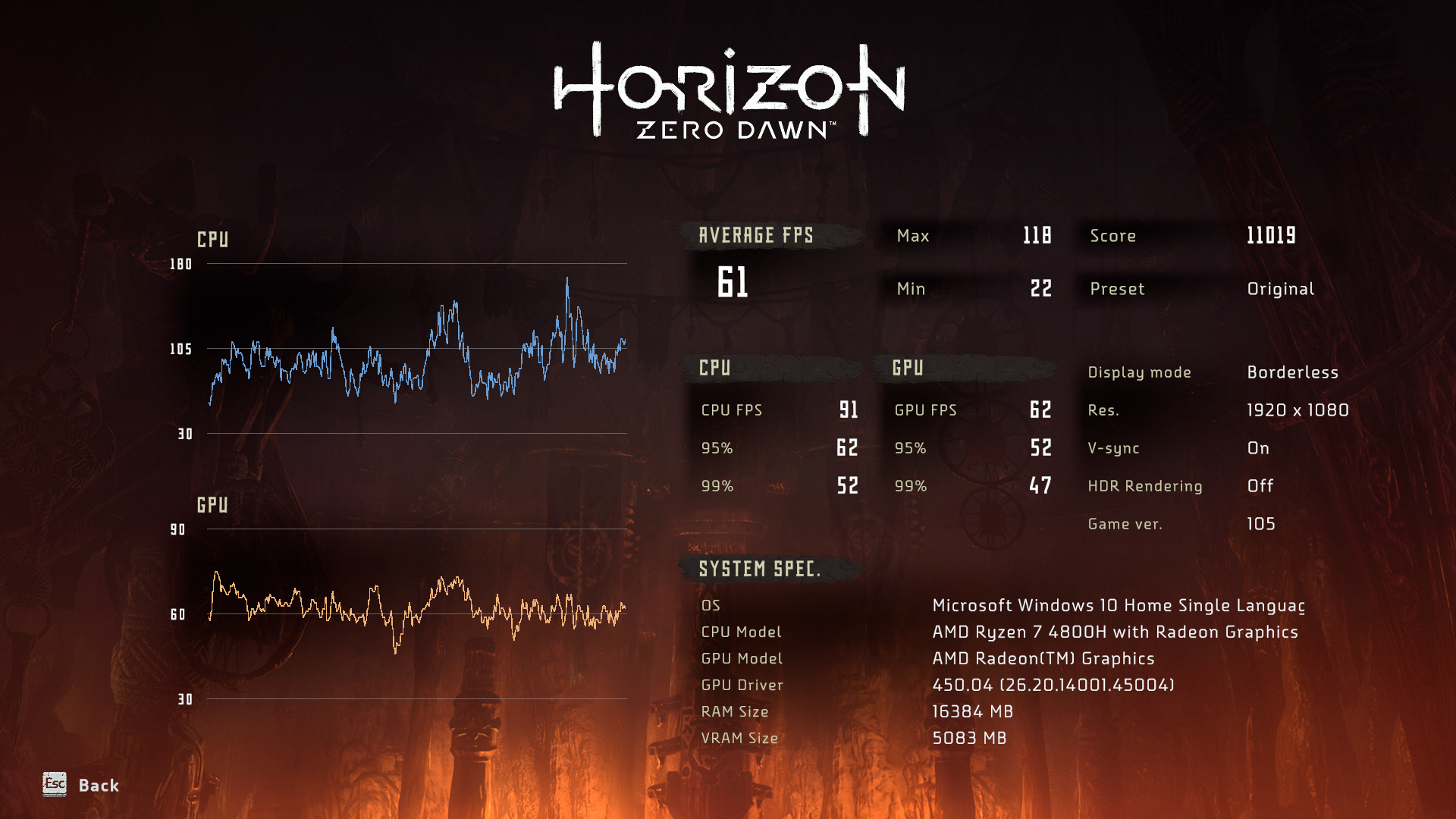 The final game benchmark I ran was The Division 2 as it is a great engine to test both the CPU and GPU. Once again, the laptop handled this brilliantly giving me an average of 74FPS. FPS across the four tests zones is not consistent, but within each zone it is very consistent. The benchmark does suggest setting the graphics settings to High and not Ultra, but with some tweaking I was able to get a stable 60FPS with Custom settings. This benchmark seemed to stress the CPU beyond thermal throttle limits of 105 degrees Celsius (it hit around 106), however given that nothing else hit that limit I had ASUS check and it was indeed a problem of the review unit going through too many hands and being manhandled and likely overstressed in different tests. I could not replicate the thermal throttle in any other game or software. 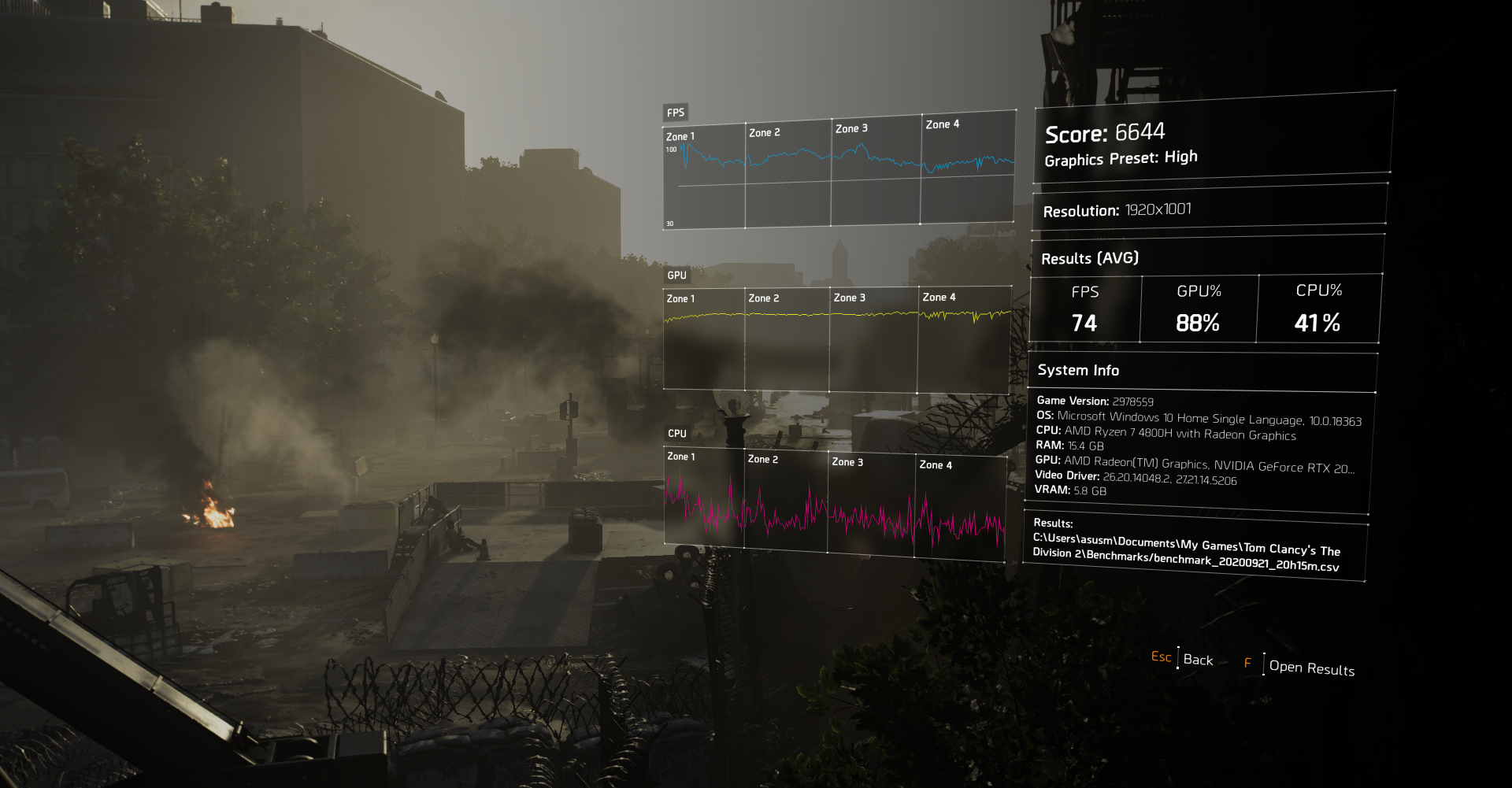 Benchmarks are all well and good but actual gameplay is where the rubber hits the road. For this I played between ten and fifteen minutes of DOOM (2016), The Division 2 and Total War: Warhammer 2. This range of games will test the CPU and GPU and show what real-world frame rates we can get.

Sadly, the software I use to capture framerates did not capture that of DOOM (2016) and The Division 2. But using MSI Afterburner (Sorry ASUS, this is the best software for onscreen stats) I was able to monitor temps and framerates. In-game I was easily averaging between 90 and 100FPS in both games and crucially I was not hitting any thermal limits (GPU or CPU) as I did during The Division 2 benchmark. This further reinforces my belief that the review unit was at fault. 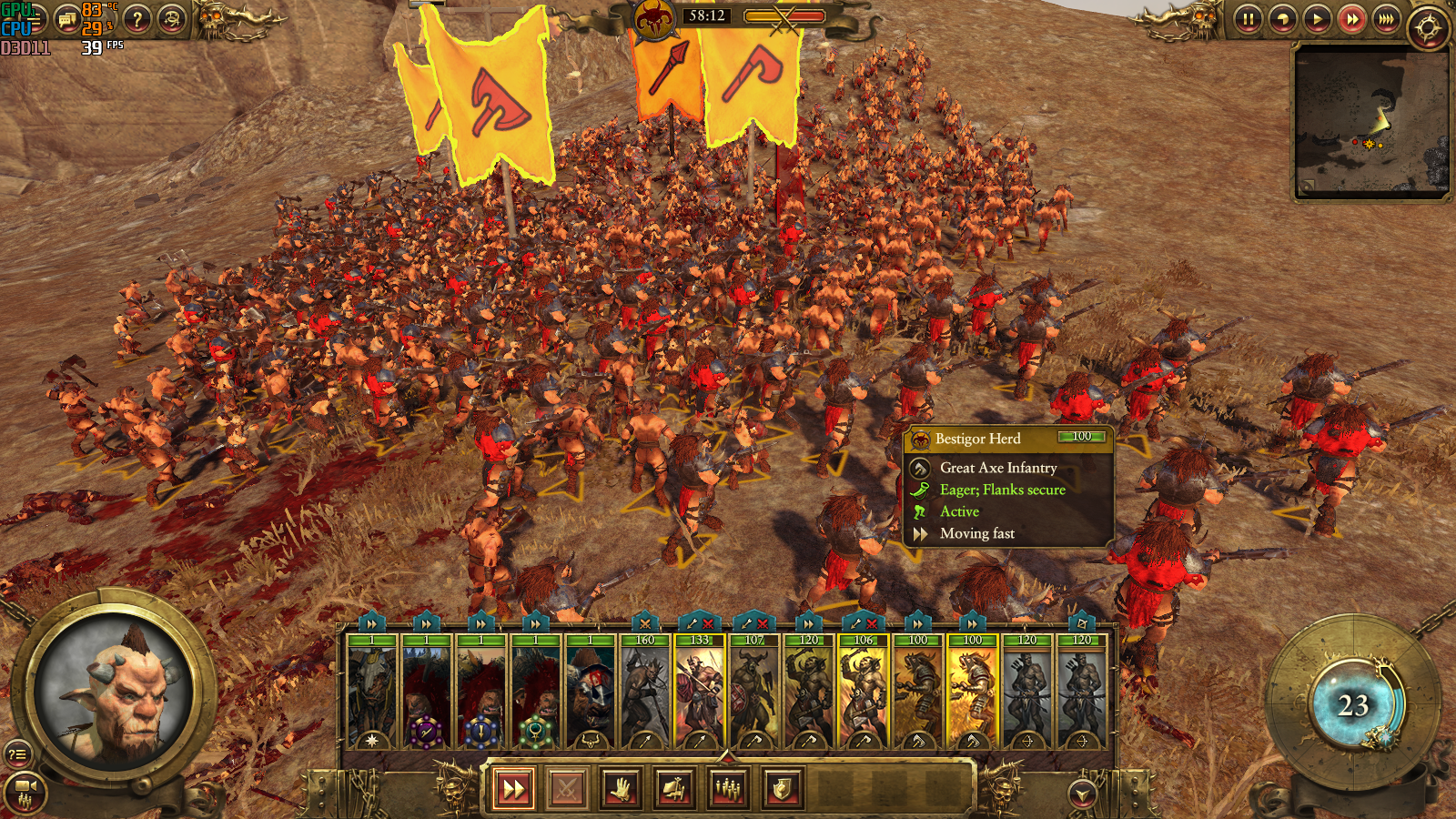 Total War: Warhammer 2 is a great game to run when you want to see how an insane number of character models affects performance. FPS is not as important in this game as it is in a shooter, but still frame rate drops can be annoying and pull you out of the game. I did experience a low of 36.64FPS, but with a high of 69.65FPS and an average of 59FPS the game ran smoothly with thousands of units being rendered on screen and each moving or attacking or running away.

On the gaming front, this laptop is a powerhouse. Add to all this a 144Hz screen with adaptive sync and you are golden for any LAN or any game that you want to play. The high refresh rate combined with the high framerates this laptop is capable of producing makes tracking targets in a shooter so much easier and your shooting much more accurate. You will be a better gamer with practice because the hardware will enable you to improve your game.

Yeah OK You Can Work on It

Okay, gaming is great, that is what we buy these laptops for, but for the most part most of us do have to do some work. Of course, normal web browsing, word processing and even most Excel work will present no problems.

I did do some light content work; a quick video edit and some terrible attempts at photo editing. I had zero issues in scrubbing through timelines in the video editor of a game captured at 1080p/60FPS. The photo editing too presented no problems. As I said this is some light content creation - do anything more complex and you will likely have a more powerful desktop to work off.

If you are in the market for a gaming laptop, then do not overlook the TUF laptops. The aesthetics may not be in your face and understated, but what counts is the performance and this laptop delivers on that.
8.5

Keyboard is too crowded

Fans are loud under full load