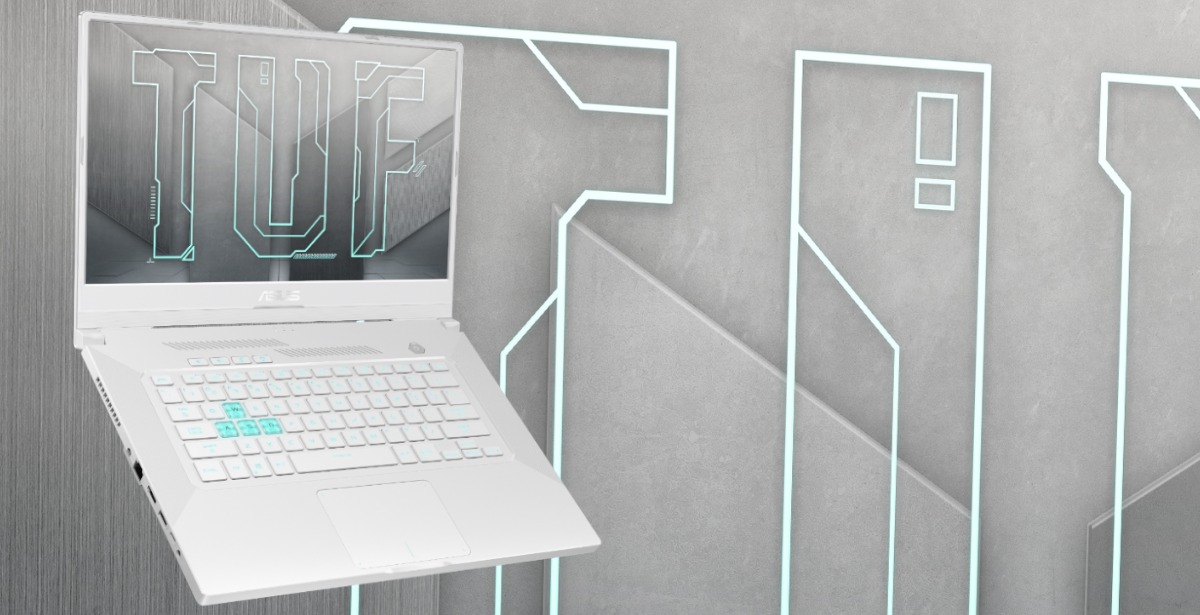 White quite literally is the new black, at least in gaming computer terms. Recently I reviewed Cooler Master’s SK622 Keyboard with its ever so stylish white key caps and if you have watched any recent build videos on YouTube you will know that all white builds are all the rage. Admittedly the white aesthetic makes a nice change from the usual black accented by insane RGB lighting schemes, but white is definitely not the scheme for everyone, especially if you don’t enjoy cleaning your equipment constantly. All this is to say is that the all-white version of the TUF Dash F15 is very, very attractive, but be prepared to treat it like one of your most precious possessions. 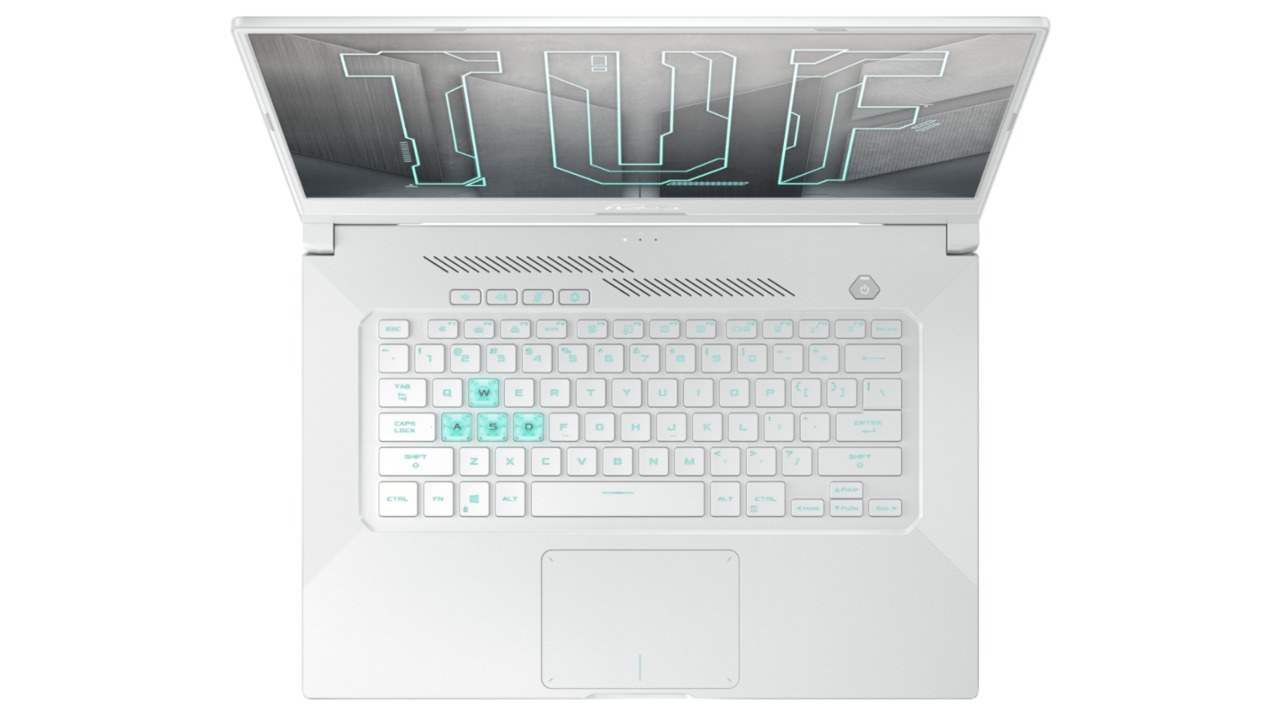 The TUF Dash F15 out of the box is striking in its stark white chassis. It literally jumps out at you simply because it is so unusual. We are used to black and gun metal grey chassis’ but take this into any coffee shop or office and it will immediately stand out. However the white aesthetic does not shout “GAMER!!!”. It is, dare I say it, classier than any gaming laptop could ever be.

Given that this is part of the TUF line you would expect it to be durable and it is that, of course.

While the white will draw your eye, the build quality is what makes it a robust laptop. Given that this is part of the TUF line you would expect it to be durable and it is that, of course. There is little deck flex to the keyboard area and pressing on the area around the touchpad does not register a touchpad input. As with all laptops there is some panel flex but you really have to apply force to get it to flex. 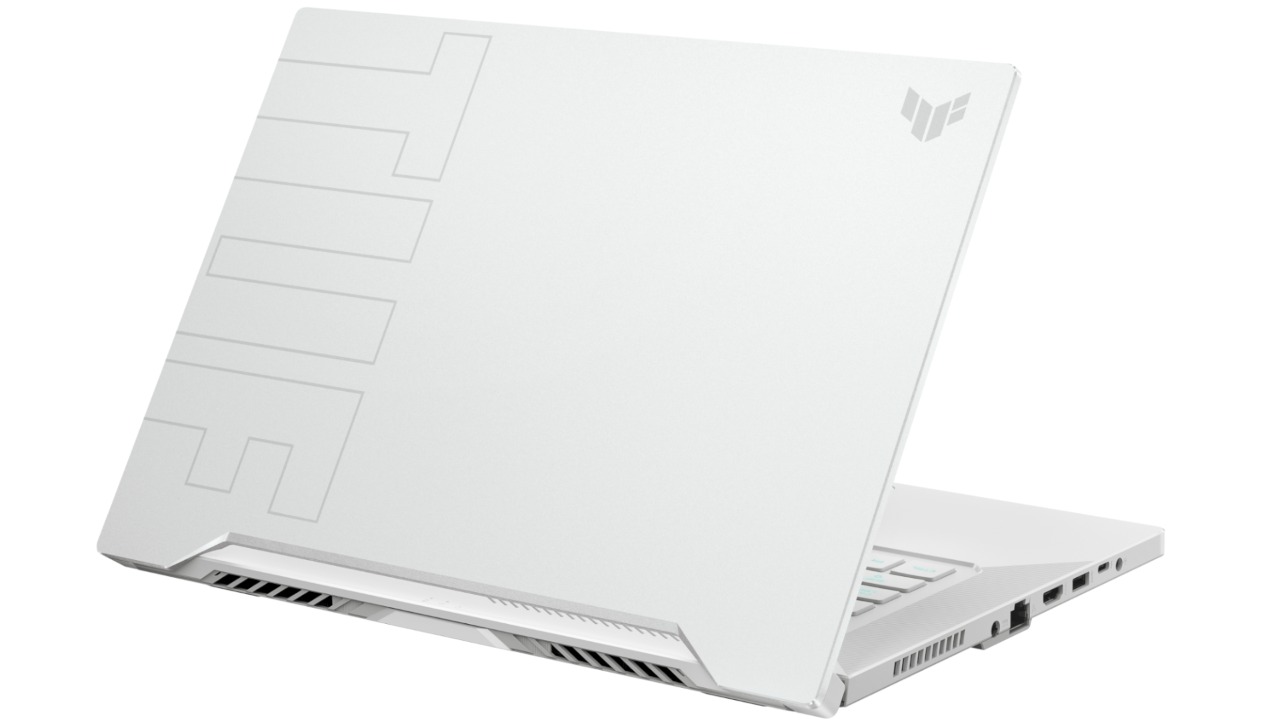 With the lid open you will be struck with how simple the keyboard design is. Helpfully WASD is set apart as they are a clear plastic key cap set, but what really struck me was the choice of default colour. Bear with me, but the Teal hue really sparks against the white chassis and keycaps. All of these design decisions leads to the thought that while this is a gaming laptop, made under the budget friendly gaming TUF brand, it really is aimed at creatives. This is a laptop that would not be out of place in an ad agency.

Asus may have taken the time to perfect the industrial design, but that does not mean that it neglected the horsepower – this laptop is so much more than a pretty face. Under the bonnet you will find:

Of course all this means that the laptop is a definite beast. As expected really. Starting with the synthetic benchmarks (Time Spy and Port Royale) we can see that if you are buying this for gaming with a side order of bragging rights, it is money well spent. The results of both show that in a game as demanding as Battlefield V, you can easily hit a minimum of FPS of 70FPS with all settings at Ultra and resolution set to 1440p. Now of course the laptop panel is not a 1440p panel, it is a great 1080p IPS panel, but you will likely have invested in at least a 1440p or even a 4K monitor. If you do play on the go you will find yourself playing on a 240Hz panel, a brilliant panel for high FPS gaming. 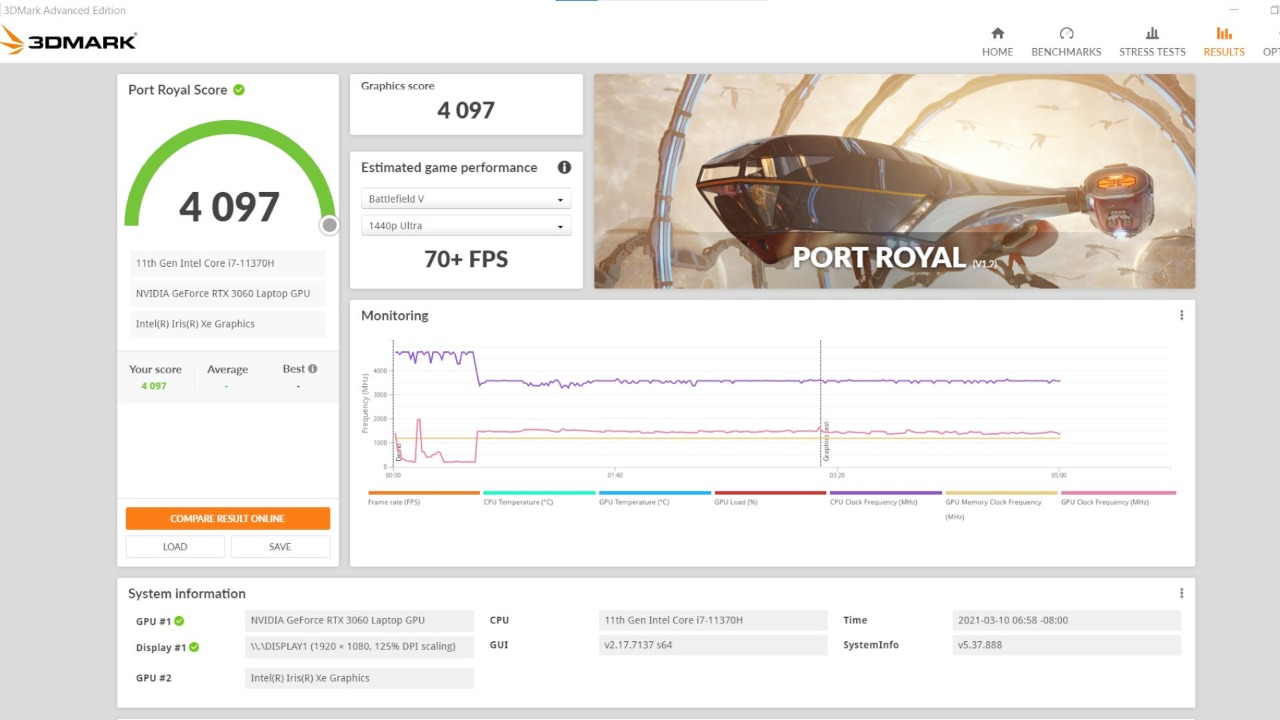 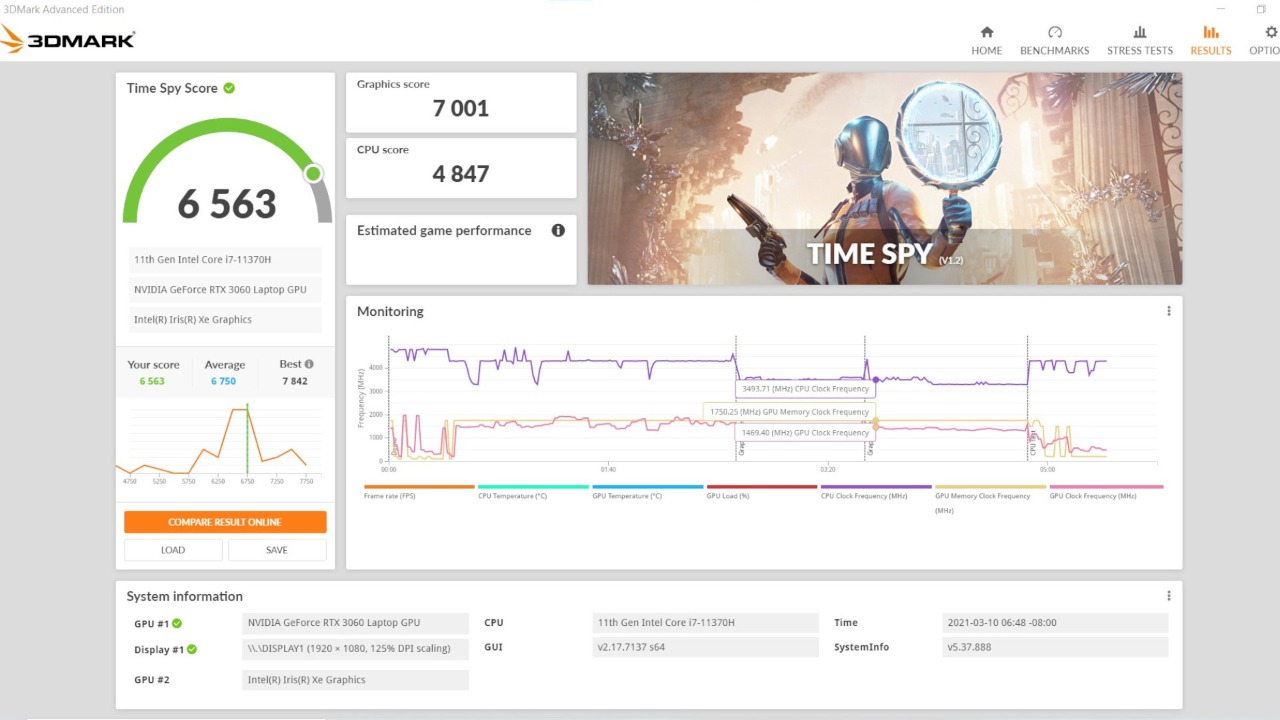 Testing gaming (real) performance is equally impressive. Rise of the Tomb Raider and The Division 2 benchmarks, demanding games themselves, prove that the laptop can easily handle these games, albeit at between 50 and 60FPS so you likely want to adjust the settings down from the Ultra settings that I used. 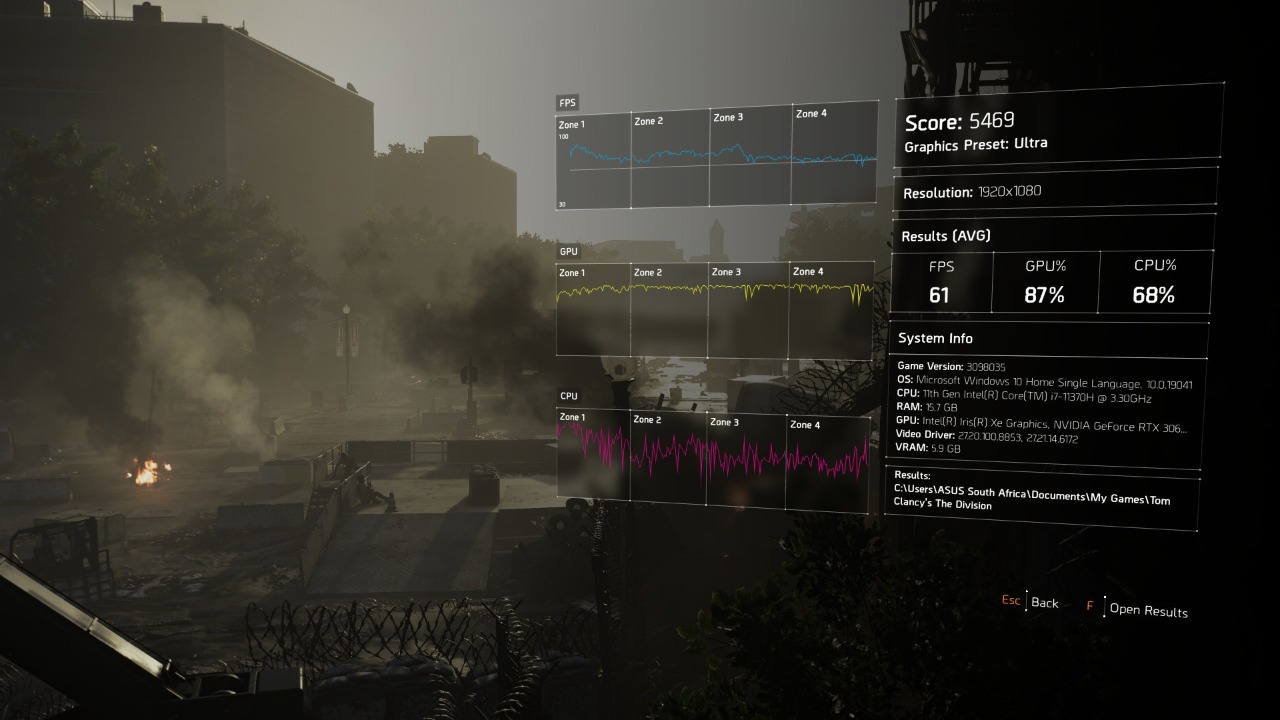 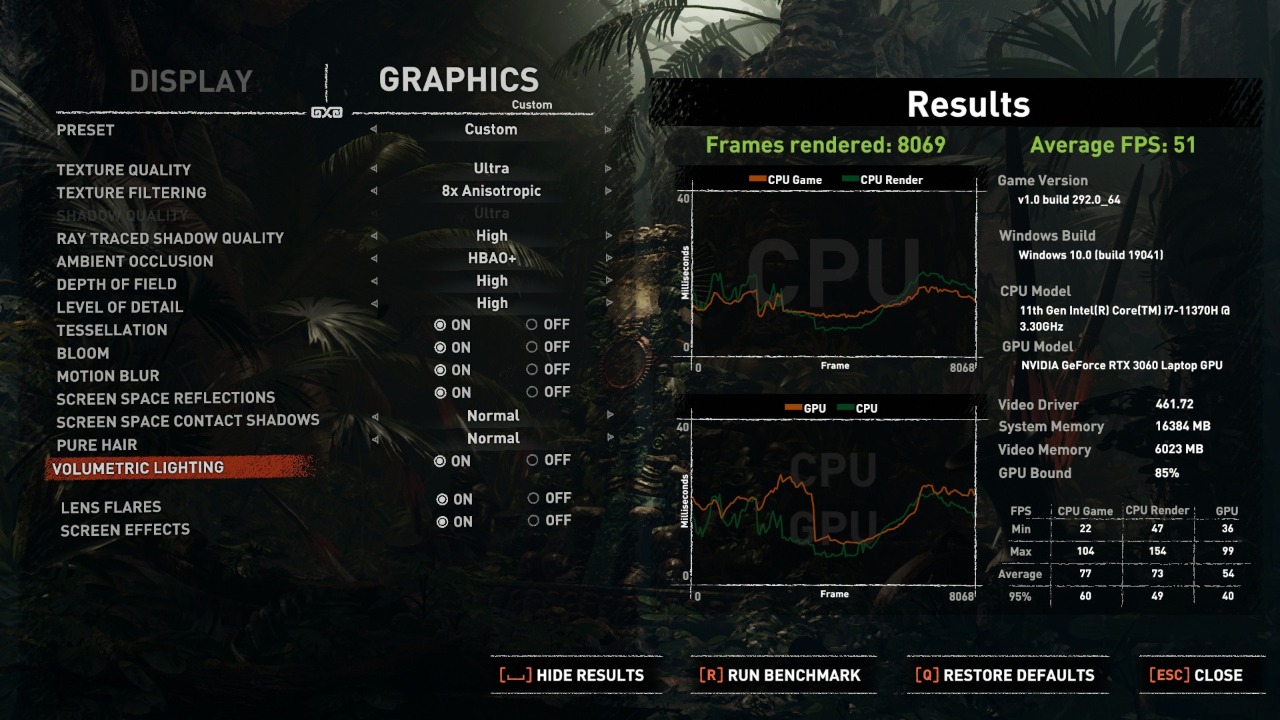 While these are game specific benchmarks, they still don’t adequately tell you how a game feels. So I took on the arduous task of playing some games on this laptop, specifically The Division 2 and Control. The former to test the responsiveness in a demanding shooter, and the latter for the ray tracing performance. 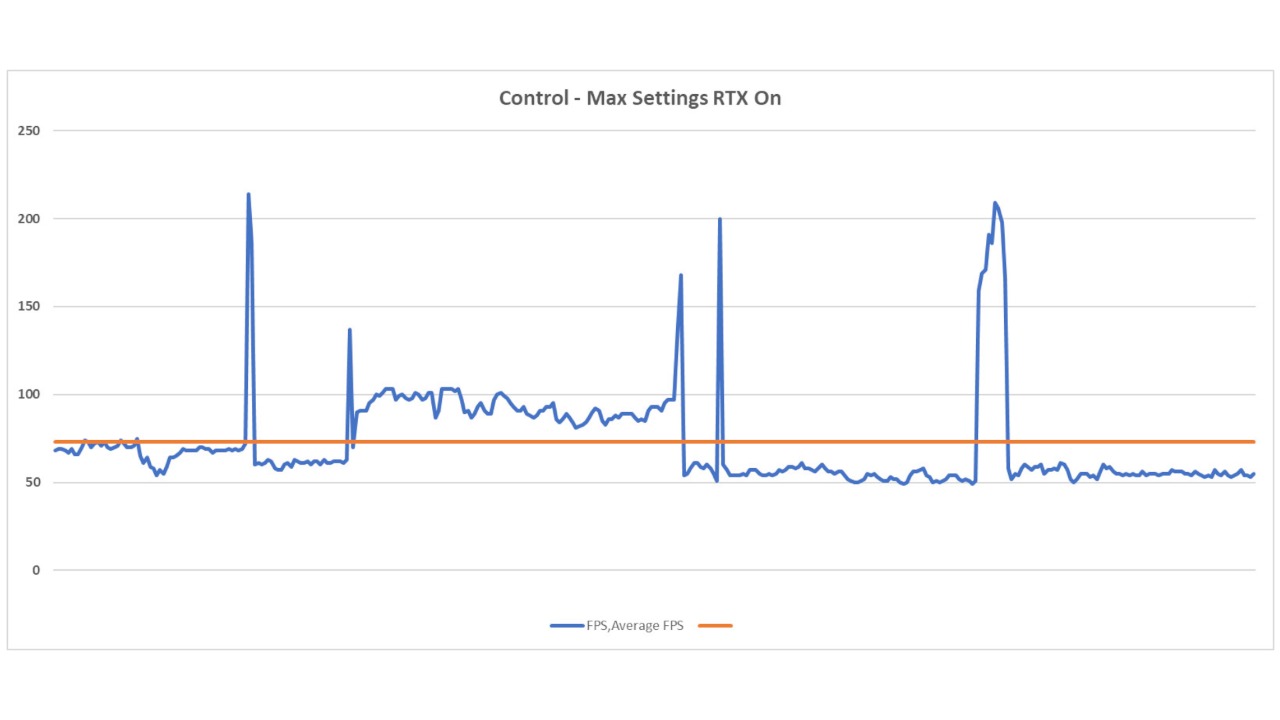 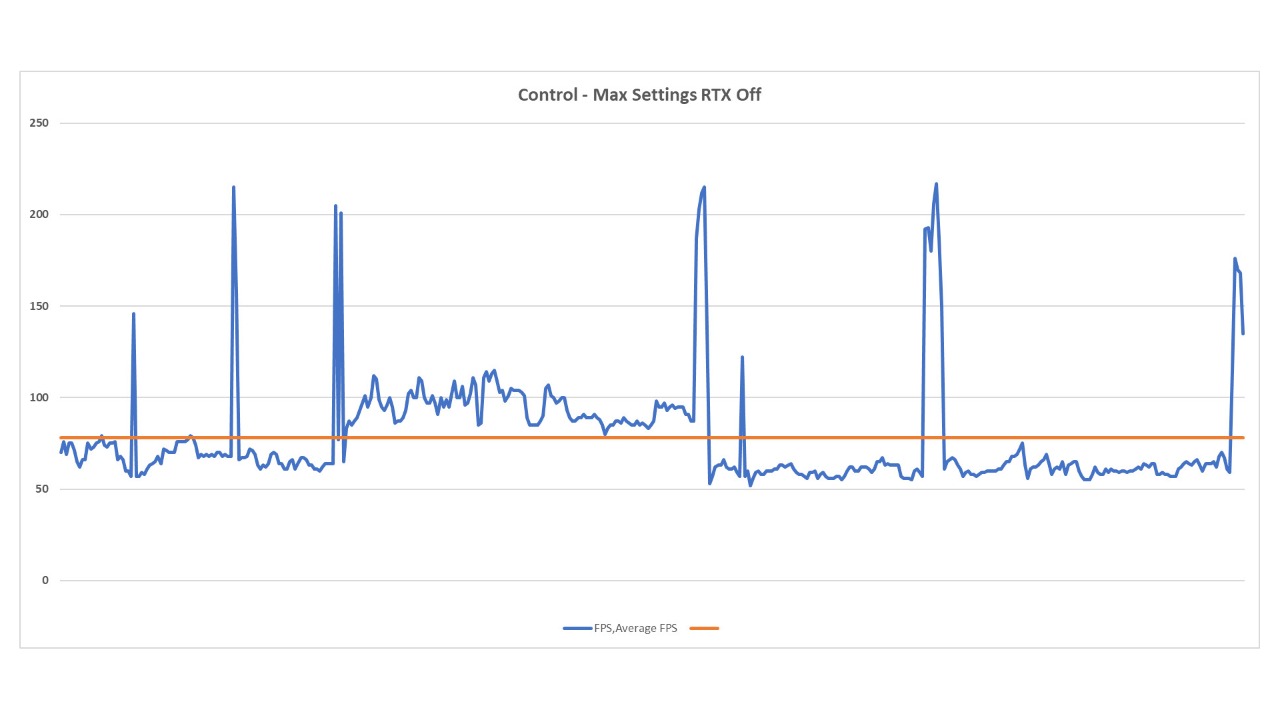 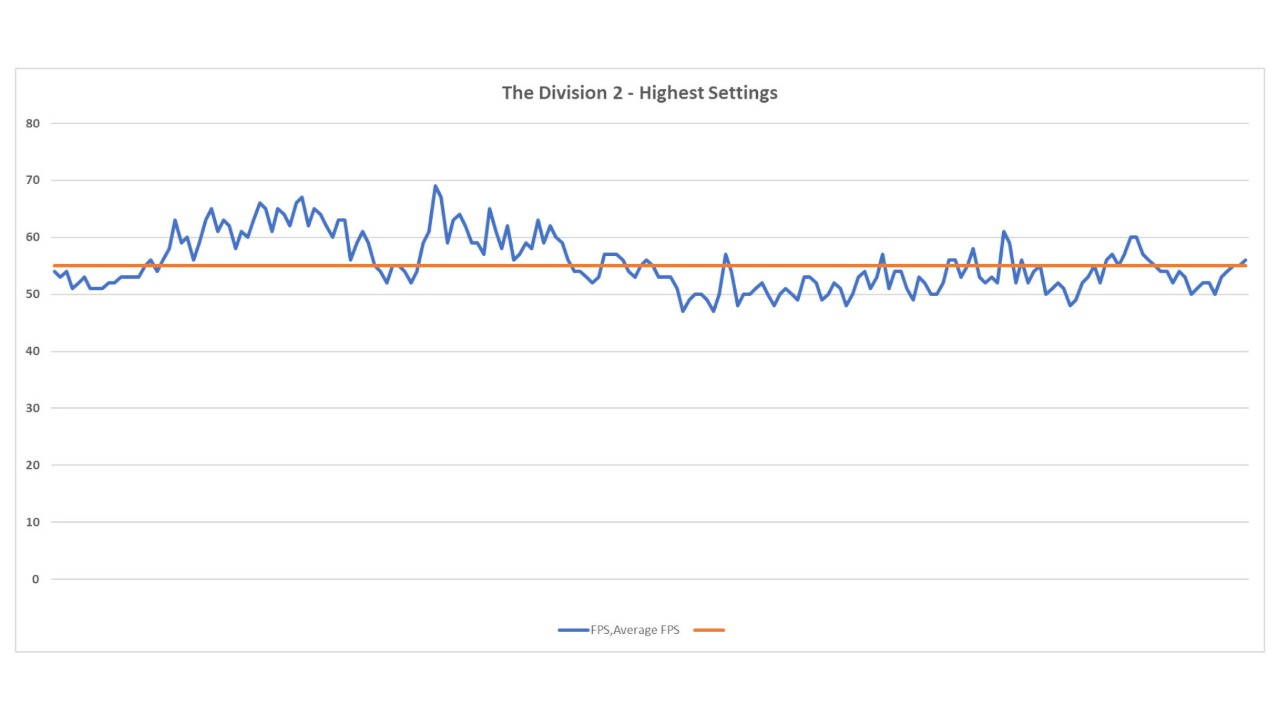 However all this impressive performance comes at a cost – a thermal cost. The CPU did hit its thermal throttle limit as reported in HWInfo, but the GPU maintained a stable and toasty 83 degrees Celsius. This translated into two concerns, the first being the loud fan noise despite the redesigned fans for this generation of Asus laptops meant to operate at lower noise levels as well as the chassis getting uncomfortably hot on either side of the keyboard. While this is an area you will not touch often during use you will touch it and it will not be comfortable to the touch, though it will not be dangerously hot.

However all this impressive performance comes at a cost – a thermal cost.

The area around the wrist rest area also got hot, though not as hot as the other areas and this will result in your palms sweating and transferring grime to the nice white chassis. So keep your cleaning materials handy.

Of course a laptop is meant for more than gaming and with this much horsepower you will be able to indulge your creative side on the go. Running PCMark 8’s Creative test gives the laptop pretty high marks, but the battery doesn’t get you much time. The 76Whr battery lasted just under two hours so you will need to carry around the power brick. Luckily, it is small and lightweight enough not to be a burden. 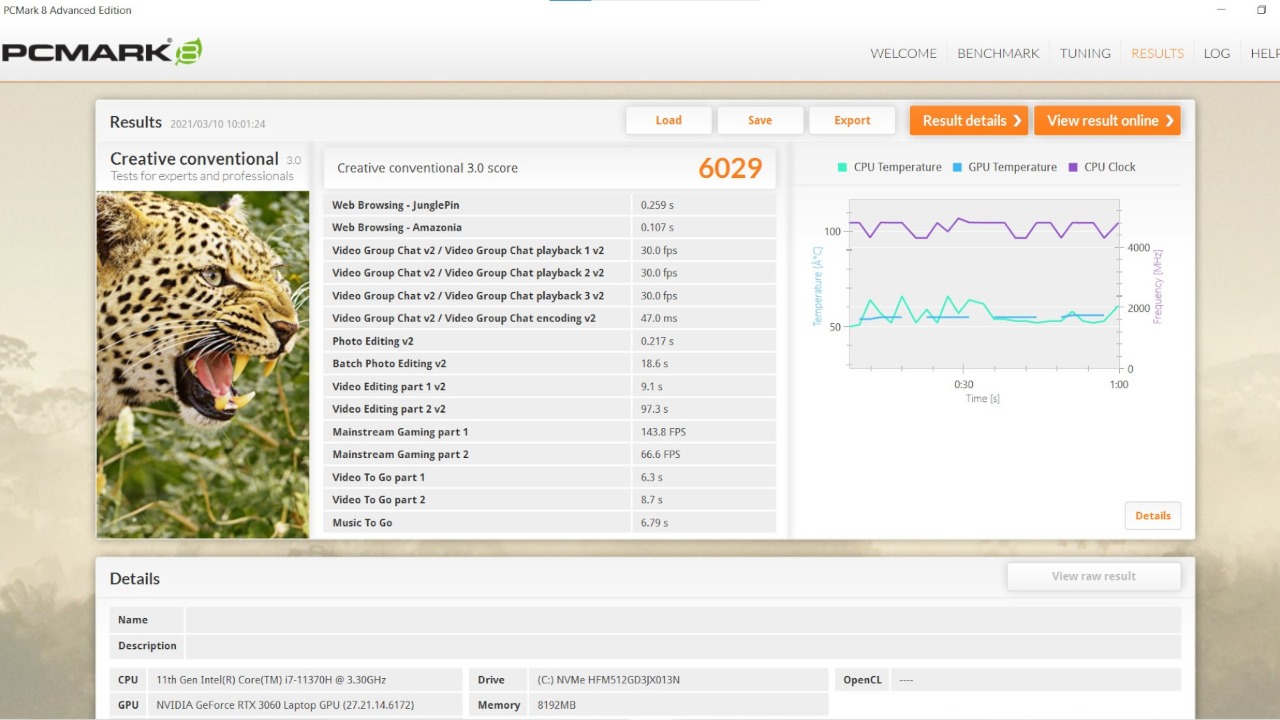 Speaking of productivity, for all of us still working from home, the noise of dogs barking and possibly kids being kids makes meetings a serious chore. Asus have helped solve part of that problem, at least for the people you are talking to. Featuring their own version of hardware noise cancelling, the laptop ensures that your colleagues will always be able to hear what you have to say on a call. This is like Nvidia’s RTX noise cancelling but is more efficient in that it uses the CPU processing power instead of the GPU to pull off this trick. For anyone used to working in coffee shops, this will be a boon when we are all able to work from coffee shops again.

The Asus TUF Dash F15 is a beautiful laptop with considerable processing power. This is a laptop for anyone who wants to game but wants to stand out from the typical gamer crowd. Despite the slight thermal concerns this is a laptop you have to consider if you want a light and powerful 15” laptop that will enable you to edit photos and videos while standing out amongst the crowd.
8

Battery life is not the greatest