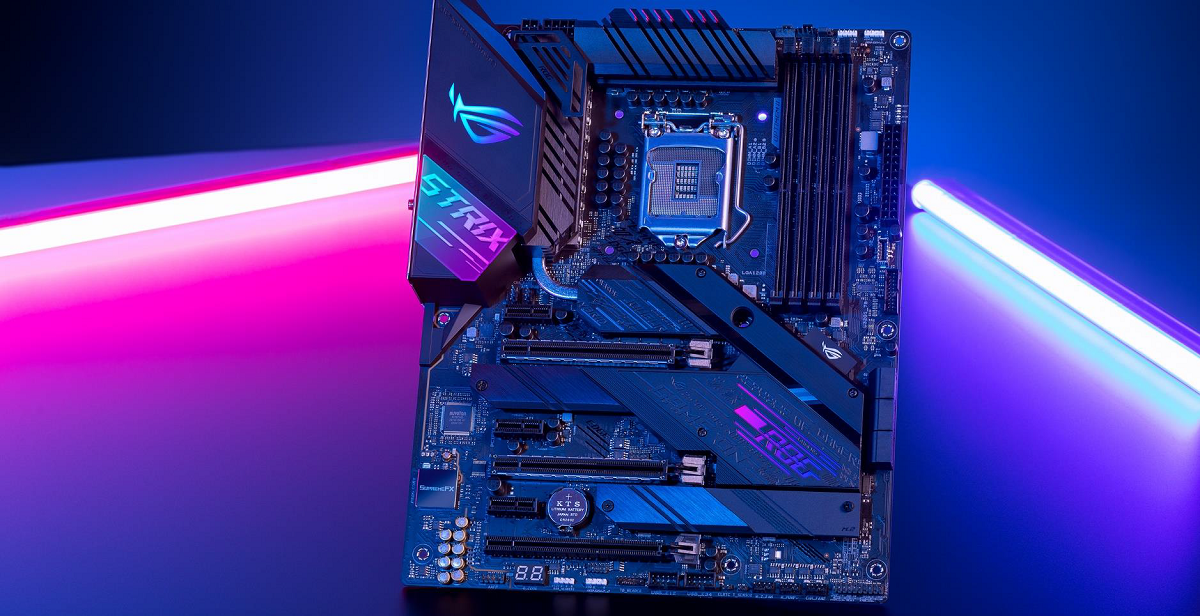 Intel’s new 400-series platform has kicked off with Z490 platform, promising next generation performance, especially when paired with 10th-Generation Intel CPUs. In this case we are looking at ASUS’ latest dive into the world of PC backbones, and the venerated motherboard manufacturer has really pulled a home run with the ROG Strix Z490-E Gaming. 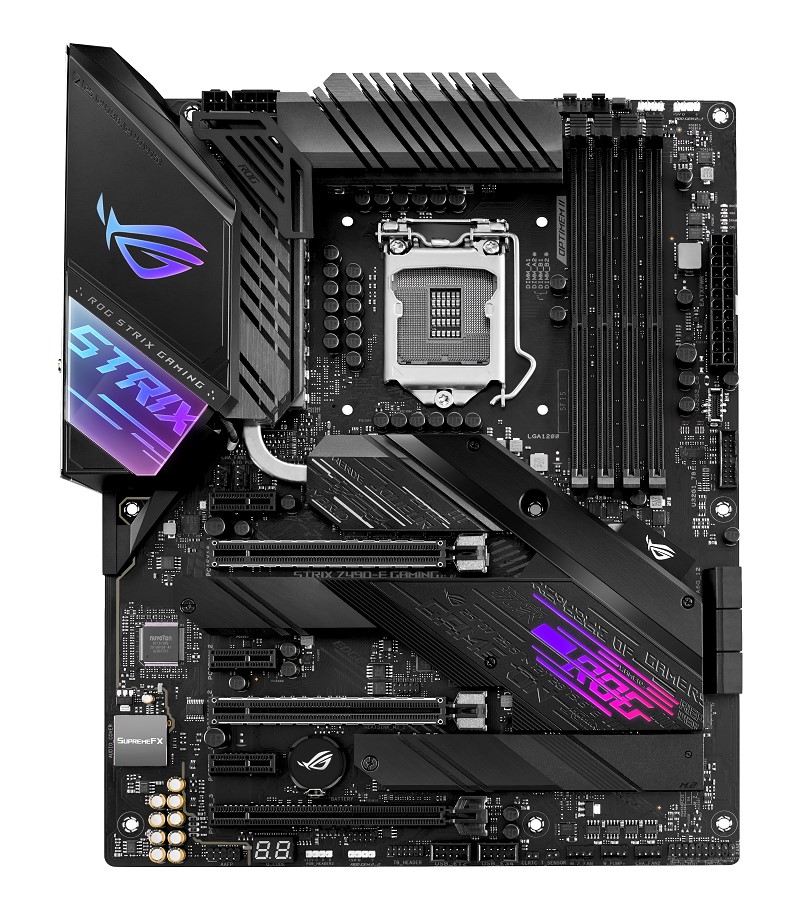 Off the board (hehe, puns), we can see that ASUS, or Republic of Gamers rather, has poured their company motif into their latest Intel rendition, focusing on the needs of the end user in both innovation and design. A quick look around the board, we can see beefed up VRM and CPU heatsinks, improved cooling for the two available M.2_2 slots, and along with the pre-installed I/O shield – which has become the norm (thank goodness) – we see a large focus has been placed on the aesthetics of the ROG Strix Z490-E Gaming motherboard.

The ROG Strix Z490-E Gaming supports Intel’s newest LGA 1200 socket type which has been optimized for 10th Gen Intel processors, and is already 11th Gen-Intel ready, but cannot support lower generations of Intel’s processors, unfortunately. Moving on from the CPU, the ROG Strix Z490-E Gaming offers four DIMM slots, supporting a maximum of 128GB DDR4 RAM at 4600Mhz max overclock. Underneath this, we have two PCIe 3.0 x16 slots, one PCIe 3.0 x16 slot, and three additional PCIe 3.0 x1 slots. Towards the rear, we have pre-installed I/O shield, with a BIOS FlashBack Button, and built-in Wi-Fi module. 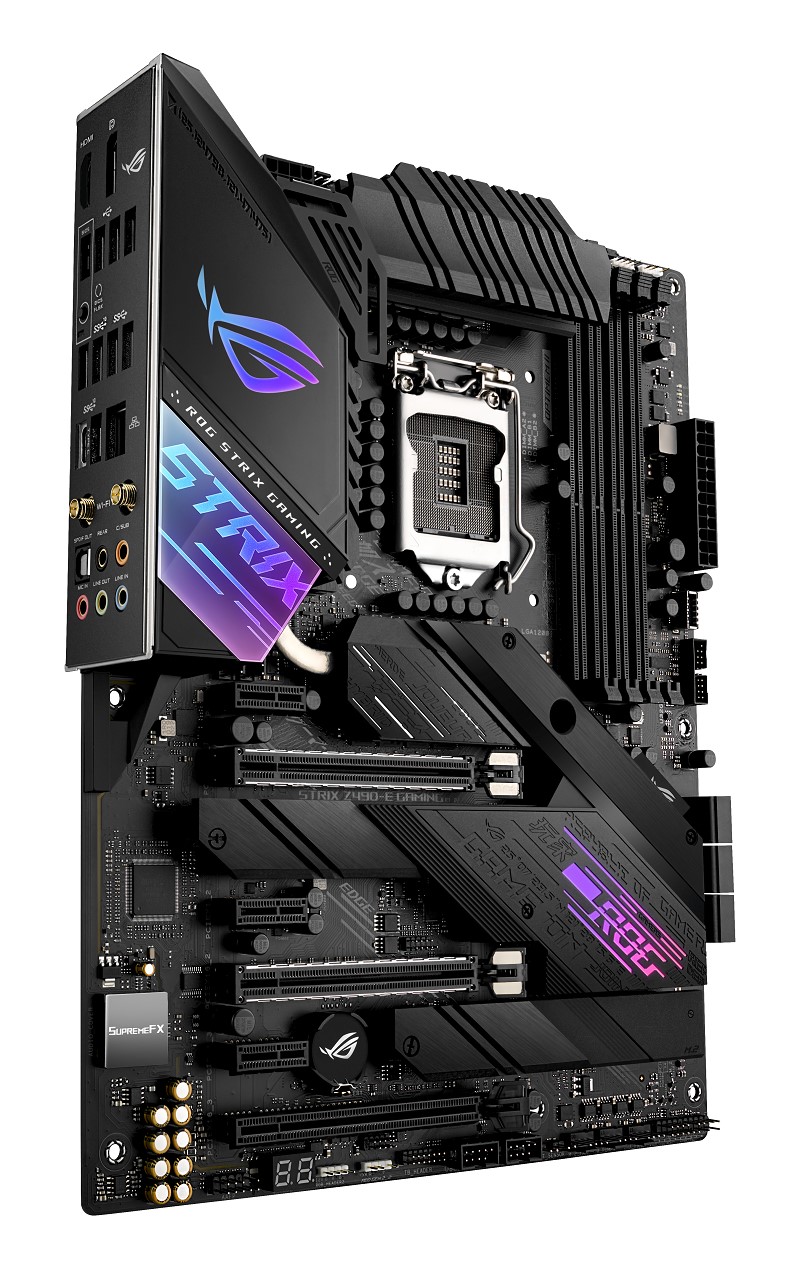 The ROG Strix Z490-E Gaming sports an edgy, Cyberpunk-ish, industrial look, showing off its performance capabilities while maintaining an essence of “I’m here to kick ass and look good doing it”. The perfect way to describe it would be to imagine Arnold in his youth as the Terminator, but with a few scratches to highlight the mechanical inner workings of the ultimate machine, and displayed in such a way that you don’t mind taking a grenade to the face, as long as it comes from him.

However, my favourite element of the board has to be the branding just right of the M.2_2 heatsinks...

As you open the box, we see the ROG eye staring at us from the I/O shield, with the words “ROG Strix Gaming” emblazoned underneath it. Just below that we have some more branding, akin to a digital billboard we see in sci-fi movies, with the “STRIX” design displayed, in a beautiful pink/blue/purple colour mashup. However, my favourite element of the board has to be the branding just right of the M.2_2 heatsinks, with an illuminating “ROG” logo in amongst their notorious “Republic of Gamers” branding, mixing industrial design with futuristic appeal. The diagonal rotation blends seamlessly into the background of the actual PCB, which extends further into the fins of the VRM heatsinks, and finally into the logo on the I/O shield. 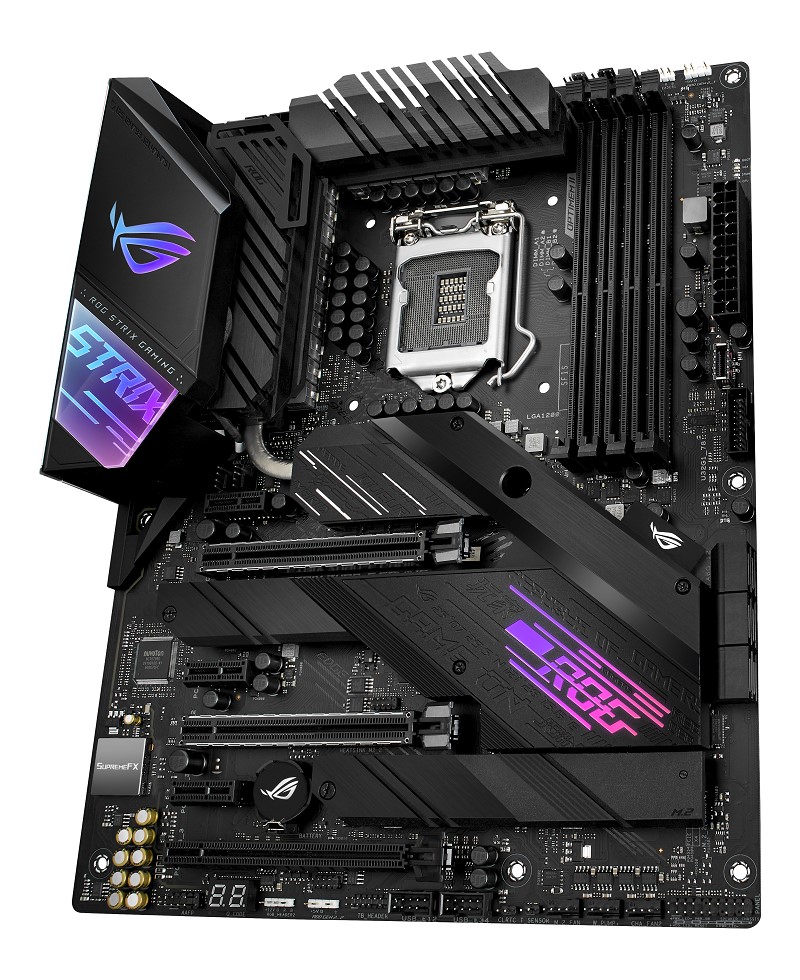 I will start off with the CPU, as the ROG Strix Z490-E Gaming boasts Intel’s newest LGA 1200 socket type for the new Comet Lake series CPUs, which sports an additional 49 pins to improve performance through better power delivery, as well as provide future I/O updates. For the most part, this is a modified version of the current LGA 1151 socket used in Intel’s mainstream gaming range, offering slightly better performance than its predecessor.
On the top end of the CPU range – the Intel 10th Gen i9 10900K – the socket boasts a small 125W power draw while the i3 10100T will draw only 35W, making the LGA 1200 socket versatile for performance and mainstream use. This will obviously be dependent on how far of an overclock you achieve, but we are promised 5.3Ghz on the chips out of the box.

Z490 is a high-performance platform, so we tested to see if it could handle any extreme overclocking, and while we weren’t able to push insane numbers – only due to cooling – we did push a 5.5Ghz single core OC with no stability issues. In fact, when we pushed the chip beyond this, the only thermal throttle came from the chip itself, since our cooler struggled to maintain a stable temperature.

Memory overclocking on the ROG Strix Z490-E Gaming yielded incredible results as well, taking my 16GB G.Skill Trident Z 3200Mhz RAM kit, and kept it stable at 3733Mhz, and was unfortunately limited by the RAM kit itself, so we were not able to test it at the 4600Mhz range. However, the ease of Intel’s XMP profiling, as well as the incredible support from the ROG Strix Z490-E Gaming, we still managed to achieve an increased 17% in memory performance, simply by clicking a button – something I hadn’t been able to achieve on other platforms. 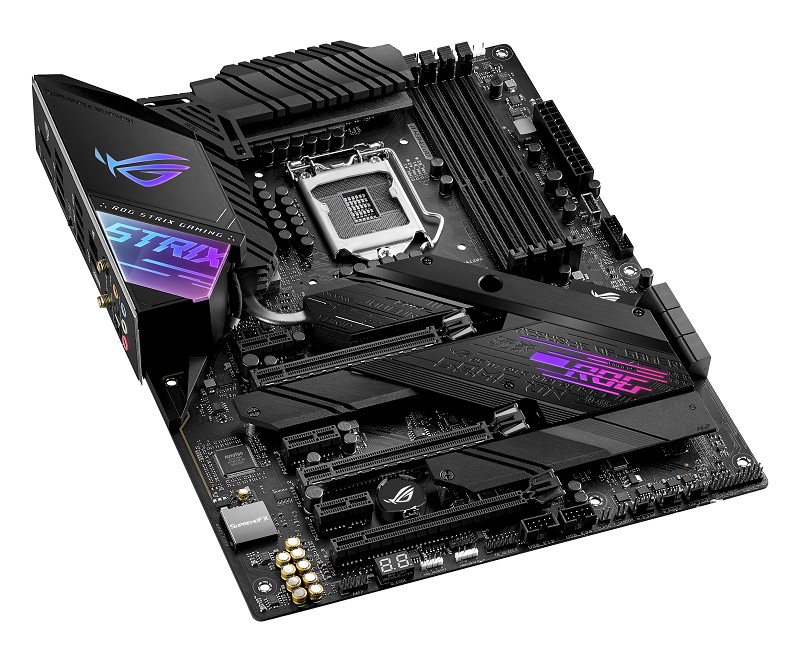 With two M.2_2 heatsinks available on the ROG Strix Z490-E Gaming, I was able to place both of my Seagate NVMe drives directly into the board, giving me 3TB of blistering speeds at all times. Not to mention, the two SSDs and two standard HDDs – I really like storage, okay, don’t judge me – I could plug into the four of six SATA 6Gb/s ports.

Coming around to the rear, we look at the I/O of the ROG Strix Z490-E Gaming. Not only do we have the multitude of USB connections, but we also see a built-in Intel Wi-Fi 6 connection, capable of handling Wi-Fi 6 connections as well as Bluetooth 5, and for those cable aficionados, there is still an Intel I225V-V Gigabit LAN port. Most excitingly, though, is the BIOS FlashBack button and LED that makes BIOS updating so much safer and easier than before.
Hardware focus aside, the AI suite of software built into the ROG Strix Z490-E Gaming is phenomenal. ROG GameFirst VI – which is an ROG exclusive – not only allows you to monitor your network traffic but actually prioritises your online gaming, setting streams and general browsing to the backburner. The best part about it is that it is AI controlled, so you don’t actually have to change a thing – simply launch on online gaming and your network traffic is automatically prioritized to your game! More than this, the AI software will still keep your streams running perfectly in the background, while ensuring that you are as lag-free as possible in online gaming.

Most excitingly, though, is the BIOS FlashBack button and LED that makes BIOS updating so much safer and easier than before.

The ROG Strix Z490-E Gaming also features AI Overclocking, which is a proprietary ROG algorithm that predicts the optimal OC settings for your system, depending on your system components and cooling – which it can automatically detect. This may take the fun of manual overclocking out of it but those who are not confident in overclocking can still get the best out of their system. Lastly, the AI Overclocking suite can make real-time adjustments, according to any scenario.

There are some slight issues I had while testing the ROG Strix Z490-E Gaming, and to be fair, these weren’t issues with the board itself, but more so with Intel. Firstly, is the lack of support for PCIe 4.0, which is not currently supported on any 10th Gen Intel, despite some claims from other manufacturers in the market. PCIe 4.0 has been fully supported by AMD for some time now, and while Intel does promise that the 11th Generation will support PCIe 4.0 connectivity, it is a shame that they have not opted for early adoption – or current adoption, rather – forcing end users to wait for 11th Gen Intel CPUs to reap the benefits of PCIe 4.0.

Secondly, is pricing, and this is an argument that gets made quite often when it comes to ROG products, but when you consider that the ROG Strix Z490-E Gaming offers better platform stability, better user functionality, and absolutely stunning design, it’s a premium worth every single cent, especially for the PC enthusiast in us all.

The ASUS ROG Strix Z490-E Gaming is an absolutely incredible motherboard, and echoes ASUS’s heritage as one of the world’s greatest motherboard veterans. The Z490-E Gaming boasts incredible performance with an unparalleled design, and more consumer-centric features than I can count. The lack of PCIe 4.0 support is slightly disappointing but this more on the fault of Intel than ASUS, and hopefully this will be redeemed in 11th Gen. There is the concern of pricing as well, but for the enhanced performance and stability, as well as the ASUS’s venerated motherboard heritage, it is well worth it.