What's cooler than being cool? 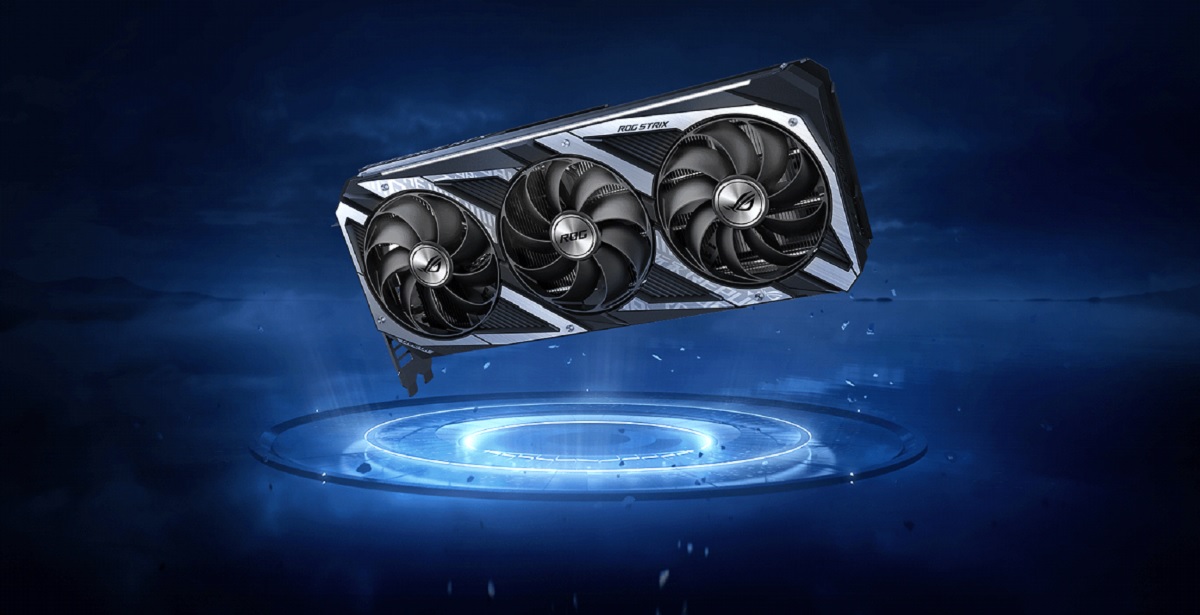 The ASUS ROG Strix GeForce RTX™ 3060 OC Edition 12GB GDDR6 is a gaming graphics card that isn’t shy about its “gamer”-ness. Just take a look at the design below and you’ll see what we mean. 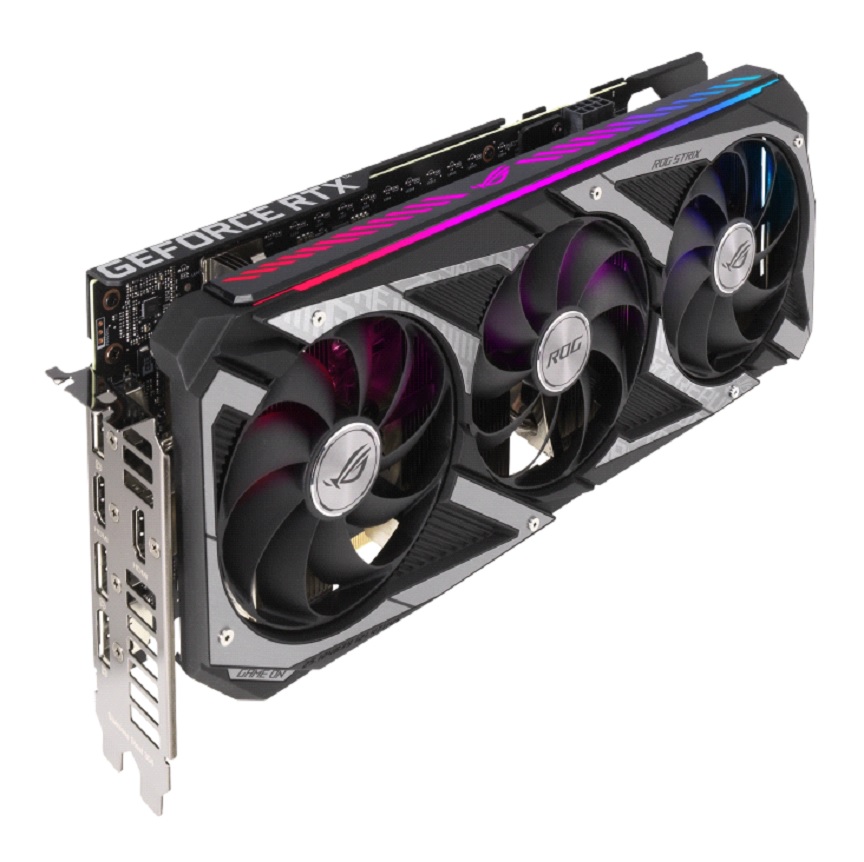 Those RGB lights and the diagonal metal plating surrounding the trio of fans accentuates the “GAMING!” aesthetic of the card. So if you’re into graphics cards which are all about the flashy looks, we’re pretty sure this one will check all those boxes. The RGB looks crisp and gorgeous on the card and seeing the ROG logo and LEDs light up for the first time will have you letting out an audible “Wow!”.

More importantly though, lets dive deeper into the technical specs:

Much like other RTX 3060 cards, the ASUS ROG Strix GeForce RTX™ 3060 OC Edition features a hefty 12GB of GDDR6 192-bit memory. This is done to “future-proof” the card somewhat and make it compete a lot better with the more powerful RTX 3070 series cards. The RTX 3070 cards feature less GDDR6 memory but at a higher memory bandwidth rate thanks to their vastly different memory bus (256-bit).

The performance you get with an RTX 3070 will obviously be much higher than with this card and as such, if it’s within your budget, gamers are advised to weigh up the pros and cons of picking an RTX 3060 over an RTX 3070 (or even an RTX 3060TI). This is especially important when considering what resolution you will be gaming at. The RTX 3060 series cards for example are being referred to as “Budget-friendly” or “Entry-level” and are aimed at 1080p gaming. However, these cards are not to be taken lightly. They are still incredibly powerful and can run pretty much every modern game at stable, high framerates with graphics settings cranked all the way up.

To test this, we of course had to run a series of benchmarks. First up, 3D Mark Timespy. You can check out the results obtained below: 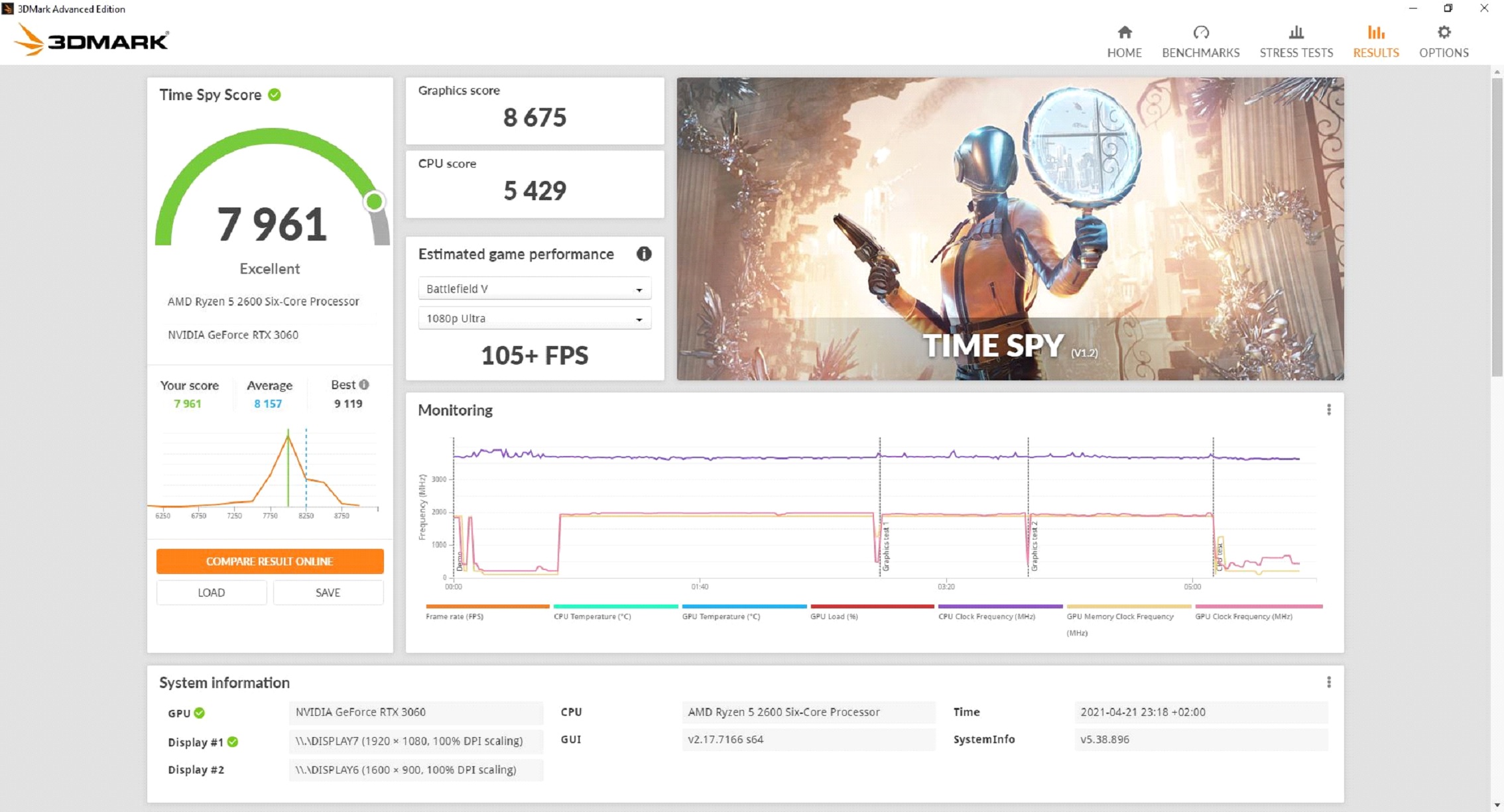 The score obtained isn’t bad at all and to further test this we also ran 3D Mark’s Port Royal benchmark test. The result obtained from this was as follows: 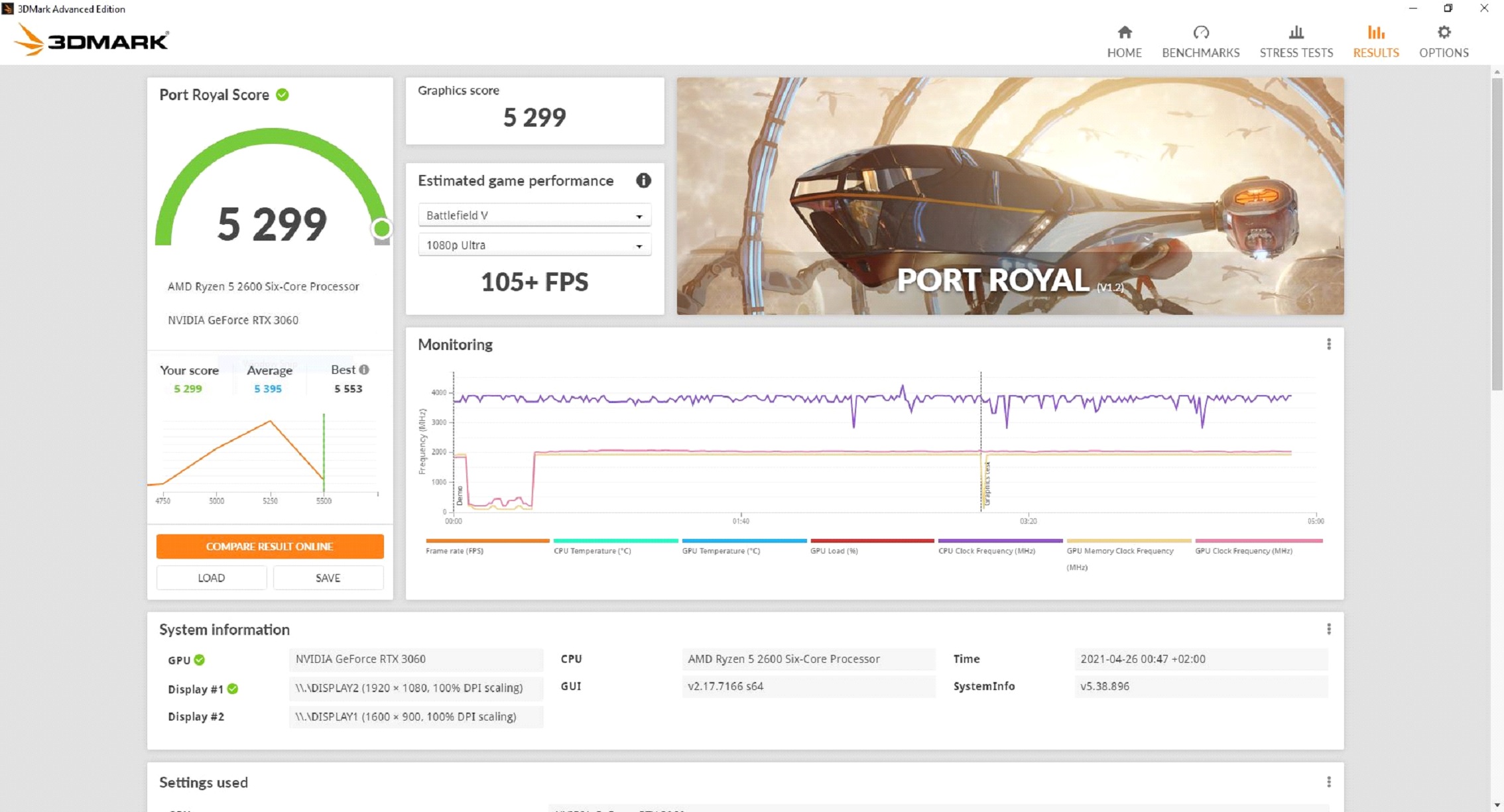 Yielding a high score of 5299, the card can clearly handle Ray-Tracing at 1080p without any problems. We also ran 3D Mark’s DLSS test set to “Performance” and at a higher output resolution of 2560 x 1440 which yielded the following score: 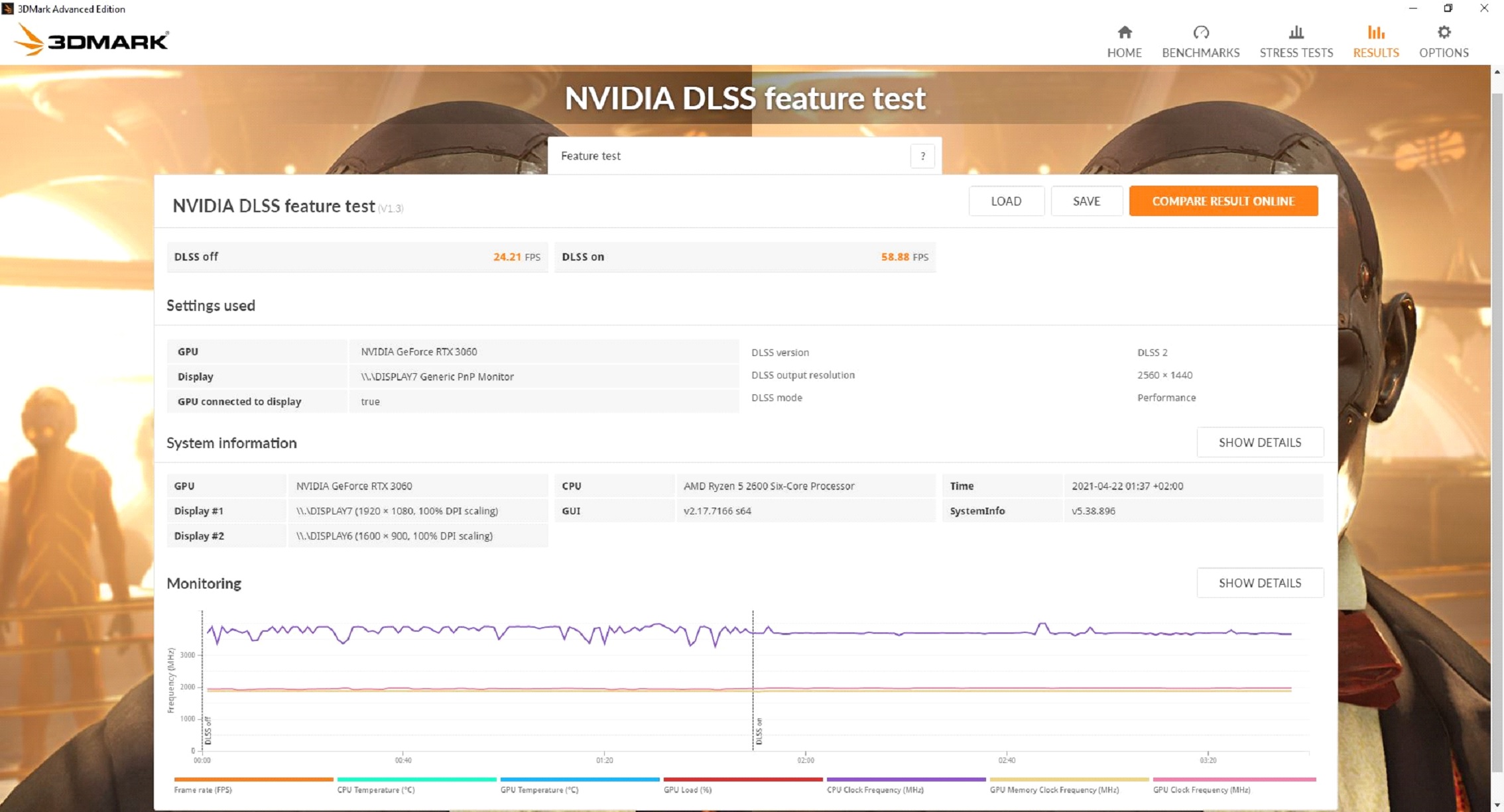 All three of the above tests mean that when gaming at 1080p and at 60Hz, the ASUS ROG Strix GeForce RTX™ 3060 OC Edition will easily handle almost every single modern game with no real issues. We loaded up our favourite, tried and trusted game for Ray-Tracing testing, Control, to confirm this and obtained some great FPS results in-game. Even with every single graphics setting maxed out, motion blur switched off, and Ray-Tracing set to highest, we got great framerates. We disabled vsync to see just how high our FPS would go and having 90 FPS in Control was flat out amazing. Re-enabling Vsync netted us a solid 60 FPS stable framerate, even in intense combat sections. 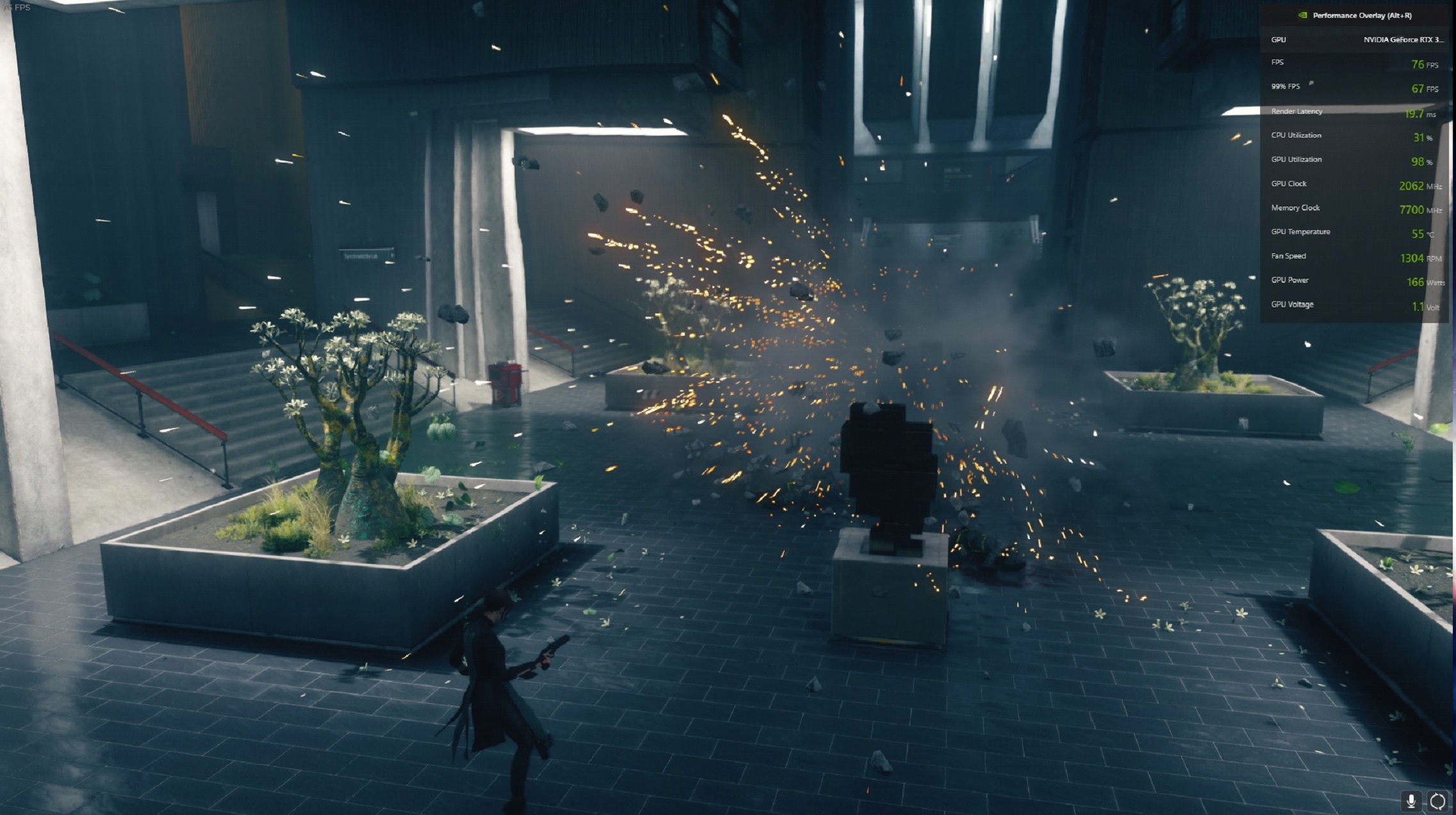 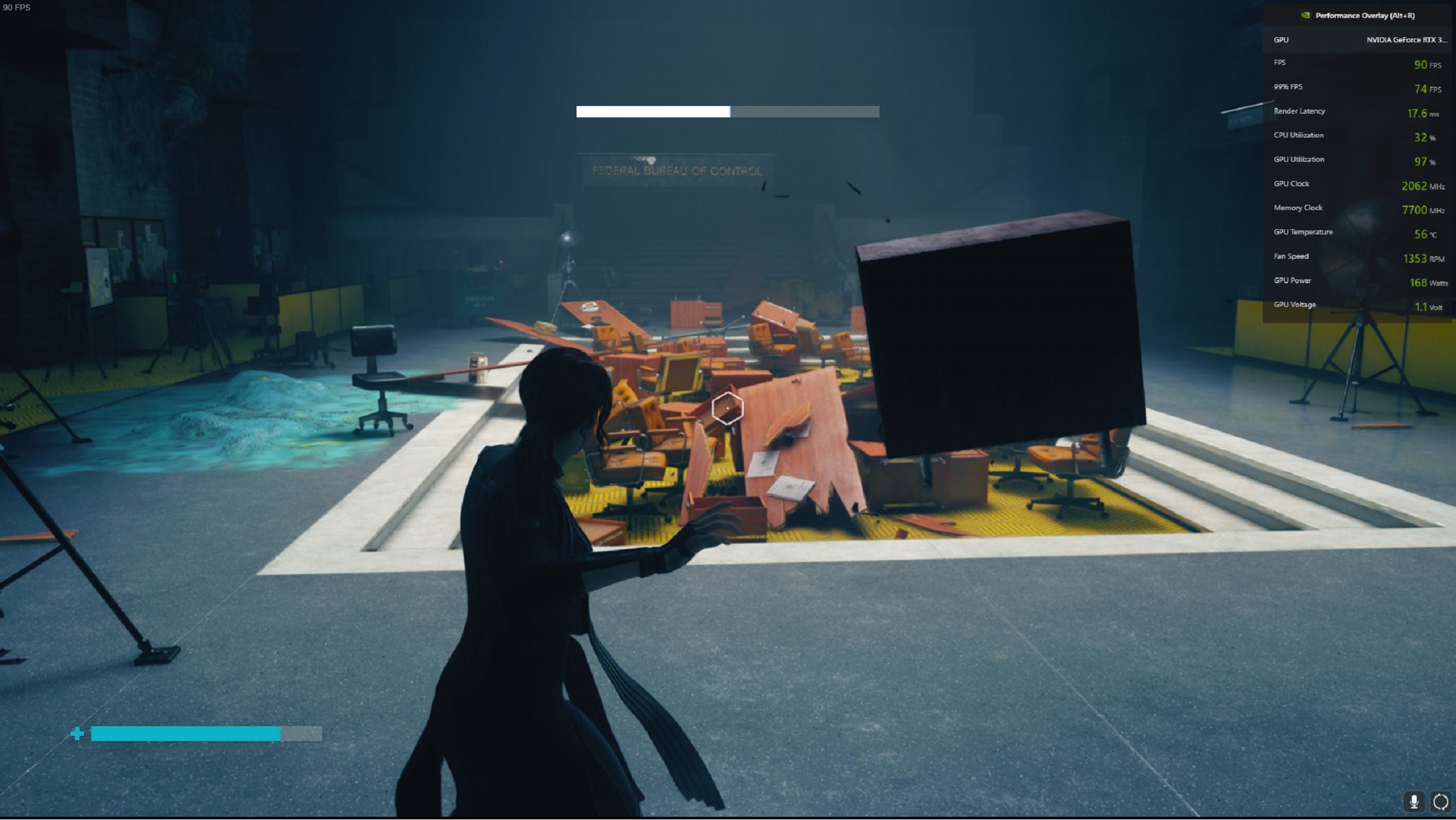 Running the Watch Dogs: Legion in-game benchmark to round off our testing of the card, we obtained good results too. You can check this out below and they speak for itself. 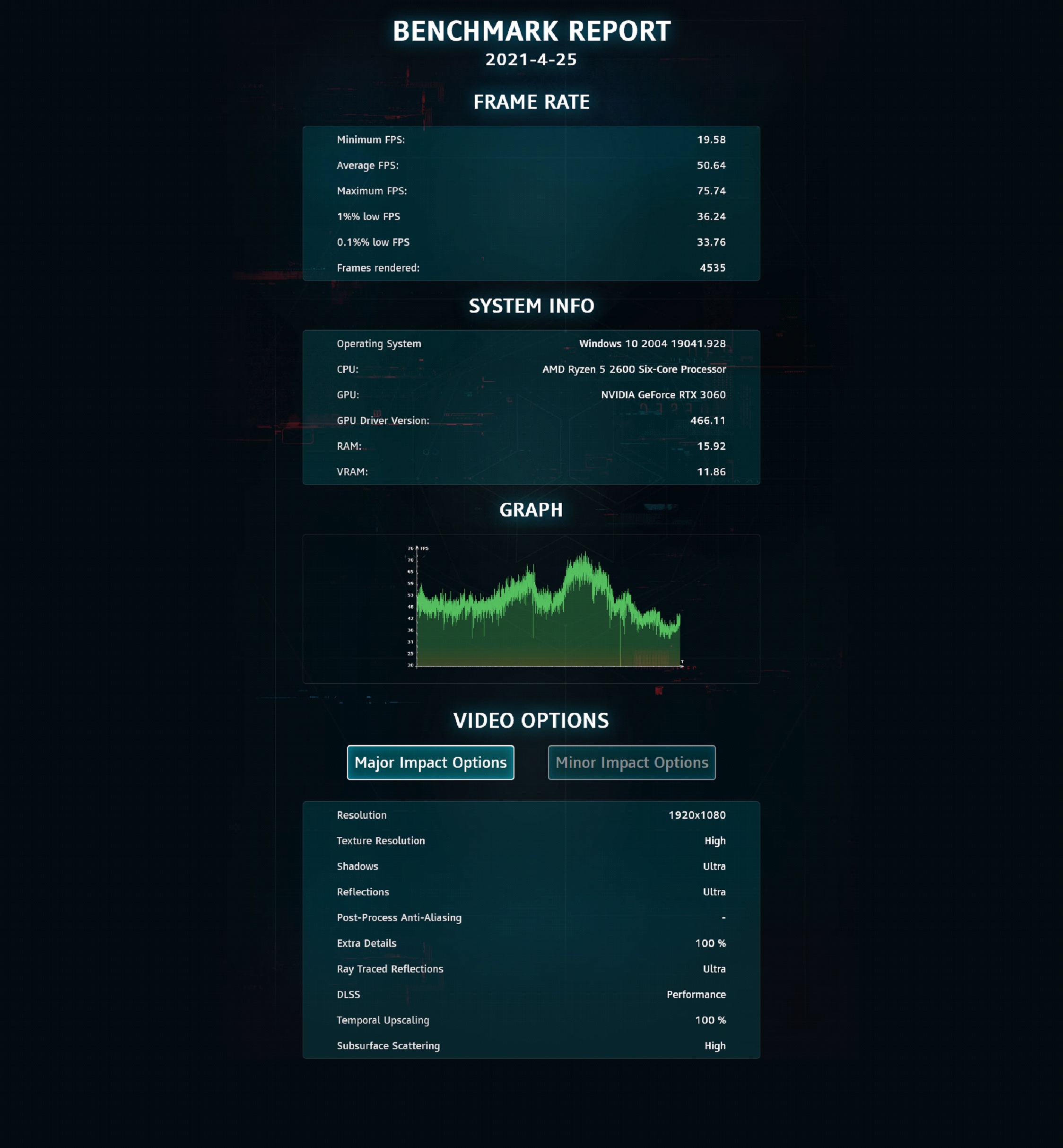 With every single setting maxed out and motion blur switched off, the card performed extremely well. If you want a stable 60 FPS in Watch Dogs: Legion, we suggest toning down either the shadows or the “Extra Details” option a tad and it’ll be easily obtained.

The ASUS ROG Strix GeForce RTX™ 3060 OC Edition is therefore a well-rounded card with good performance. There’s a rather useful physical BIOS switch on the card itself which swaps between two profiles (Quiet and Performance) without the need for software which is noteworthy. It features 3 DisplayPort 1.4a and 2 HDMI 2.1 ports and has support for up to 4 monitors. And the RGB lighting can be easily customized using ASUS Armour Crate software.

It should be noted though that ASUS state that a 750 watt power supply unit is required for this card however, depending on your CPU and GPU settings, a 550 watt PSU will suffice based on their own ROG website power calculator which can be found here. For our test desktop, a 650 watt PSU was recommended so be sure to check compatibility with your system beforehand. Thankfully, there is a handy red LED on the card itself which will light up if any power instability issues are detected by the card.

The RTX 30 series cards offer great performance but gamers and consumers need to remember that their CPUs are just as important in their PC builds. If you aren’t running a newer generation CPU (2nd Generation Ryzen or 8th Generation Intel or above), your performance gains in games might be severely bottlenecked depending on your CPU.

Lastly, the cooling system on the card needs to be talked about. During our testing in both 3D Mark and in games, the GPU never reached temperatures higher than 56 degrees Celsius. This is exceptionally good cooling at play here and ASUS deserve kudos for this. Much of this can be attributed to the card’s large size combined with the metal heatsinks and the trio of fans. The middle fan in the card has a reversed fan direction too which assists with controlling air turbulence within your PC chassis. This combination of increased surface area and adequate airflow means that the card stays rather cool when under load. With our test system idle and having only a web browser open, the GPU runs at an amazingly low 33 degrees Celsius. When the fans ramp up under load, the temperatures hover around 50 degrees Celsius.

Overall, Asus have done a great job with the ASUS ROG Strix GeForce RTX™ 3060 OC Edition. However, given the fact that the RTX 3060TI and RTX 3070 cards offer far better “Future-Proofing'' performance, and all three sets of cards are within a similar price region these days due to extreme price volatility, gamers are advised to weigh up their options. Before purchasing this card, or any RTX 30 series card for that matter, it’s advisable to consider your use-case scenario. If you want solid performance, with Ray-Tracing, at 1080p with almost every single modern game though, this card will easily deliver that while remaining quite cool too.

Price is extremely volatile and subject to change frequently