A 13” Inch laptop and desktop replacement. 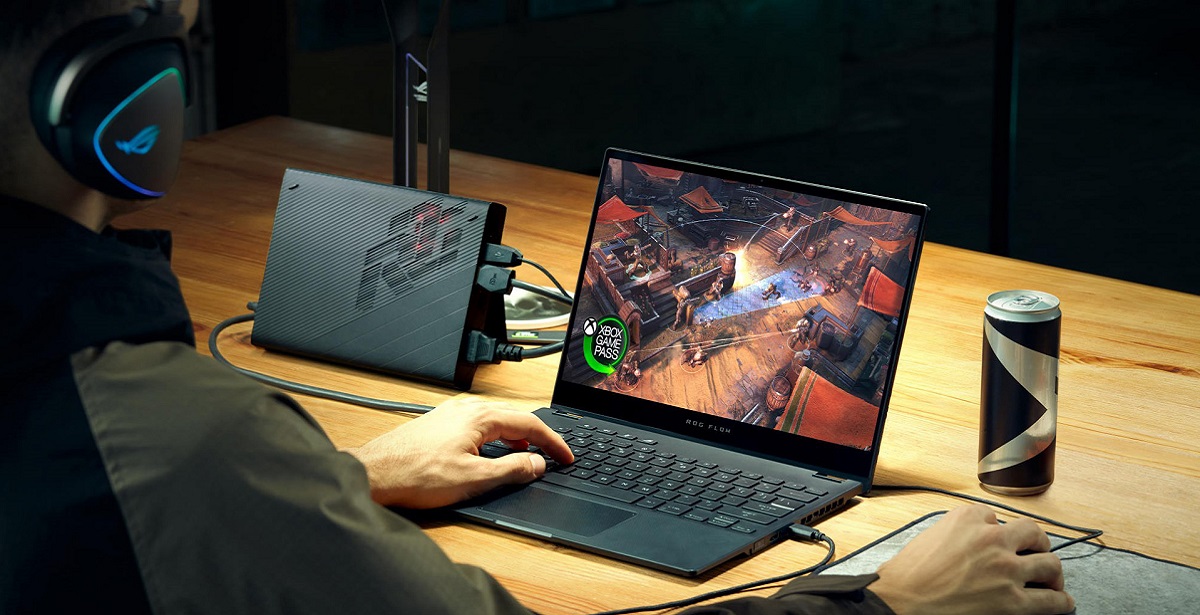 The worlds of gaming and work have been drawing closer to each other over the years and have crashed headlong into each other due to the pandemic with more and more people in lockdown and needing to find new ways to entertain themselves. This has led to a boom in gaming but with component shortages as well as limited space the need to find a two in one machine has just grown. With the Flow X13, Asus has created a potential solution that will outlast the lockdowns (we hope) and prove valuable when we can start moving around freely again and work in coffee shops.

Designed to Appeal to the Minimalist

The Flow X13 is a plain black, slim ultrabook that won’t draw much attention. This is meant to appeal to the professional and certainly does the job. The laptop lacks the usual gaming Unicorn vomit as the keyboard backlight is plain white and while you can set to Breathe or Pulse in the Armory Crate Software, the Aura Creator software used to create multicoloured lighting effects is useless on this laptop. 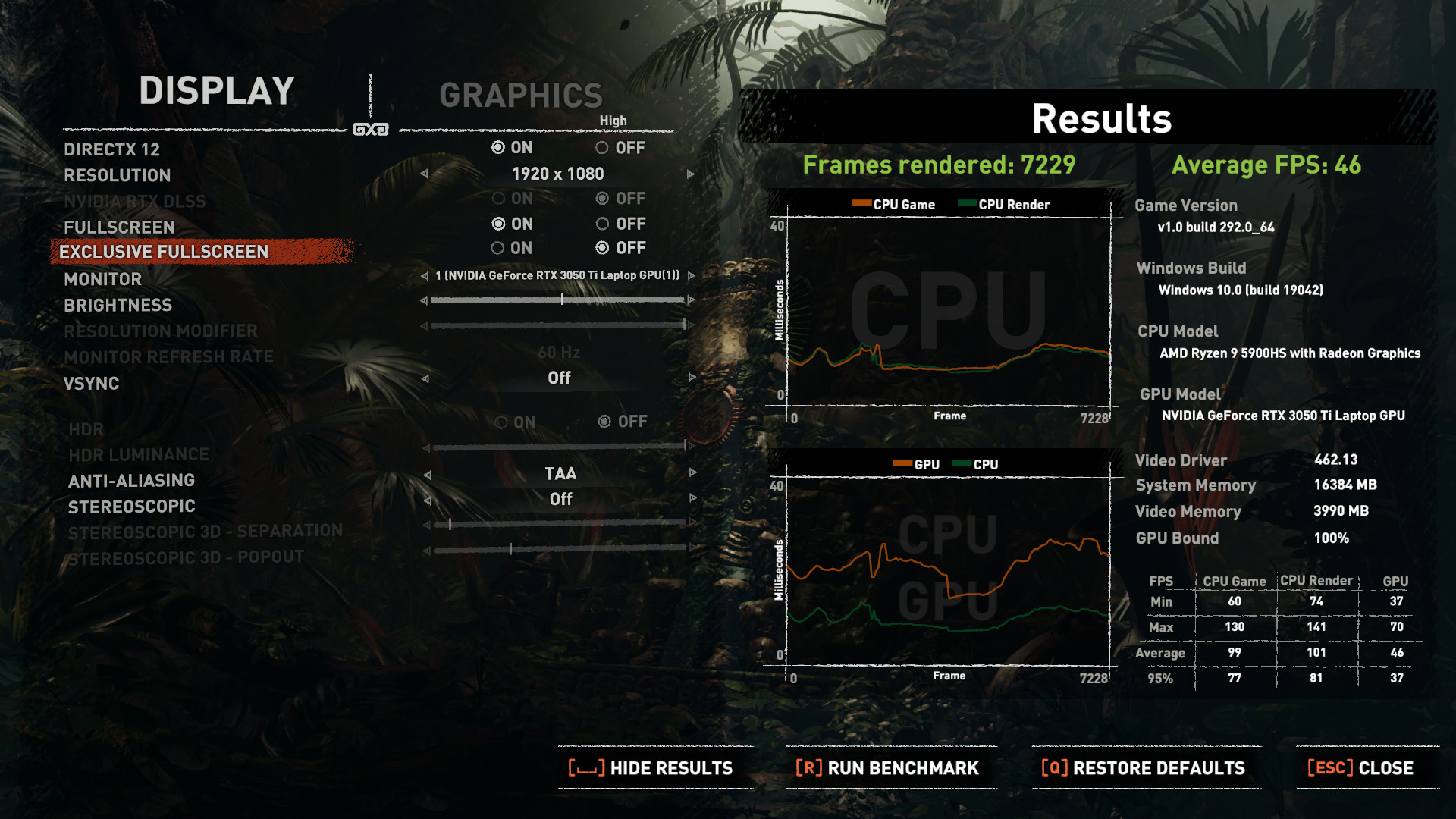 The only indication of the laptop's gaming pedigree is the nearly invisible tag on the lid as well as the ROG button at the top of the laptop that launches Armoury Crate.

The build quality is up to the usual Asus standard. Made from a combination of aluminium, magnesium and plastic the laptop exhibits next to zero flex. The same is evident in the keyboard and around the decently sized touchpad where presses around the touchpad don’t accidentally activate the touchpad buttons.

Specced to Impress, but That’s Half the Story

The review laptop provided is a high spec machine, as are all the SKUs with this being a “mid-tier” system, featuring the following:


In terms of I/O, the laptop is barebones, certainly open to criticism of being underspecced. On the right you have:

On the left is:

On its own, the specs are impressive except for the lack of a discrete GPU making the inclusion of a high-resolution screen a curious decision. Certainly, the Ryzen APU is a capable gaming APU for e-sports titles such as Rocket League, but anything more demanding and the laptop will struggle.

That’s where the unique dock cum external GPU comes in. The ROG XG Mobile Interface is the secret weapon of the laptop as this full-featured port allows the Flow X13 eGPU to take advantage of the full power of the up to RTX 3080 GPU in the separate dock. The review unit provided was “just” an RTX 3050, a still capable GPU. Unlike other eGPUs, the Flow X13 one is not limited by the throughput that even a USB Type C Gen 2 port is capable of. Instead, the Mobile interface allows the laptop to tap into the full potential of the GPU and using an eGPU allows the engineers to keep the laptop slim and light. 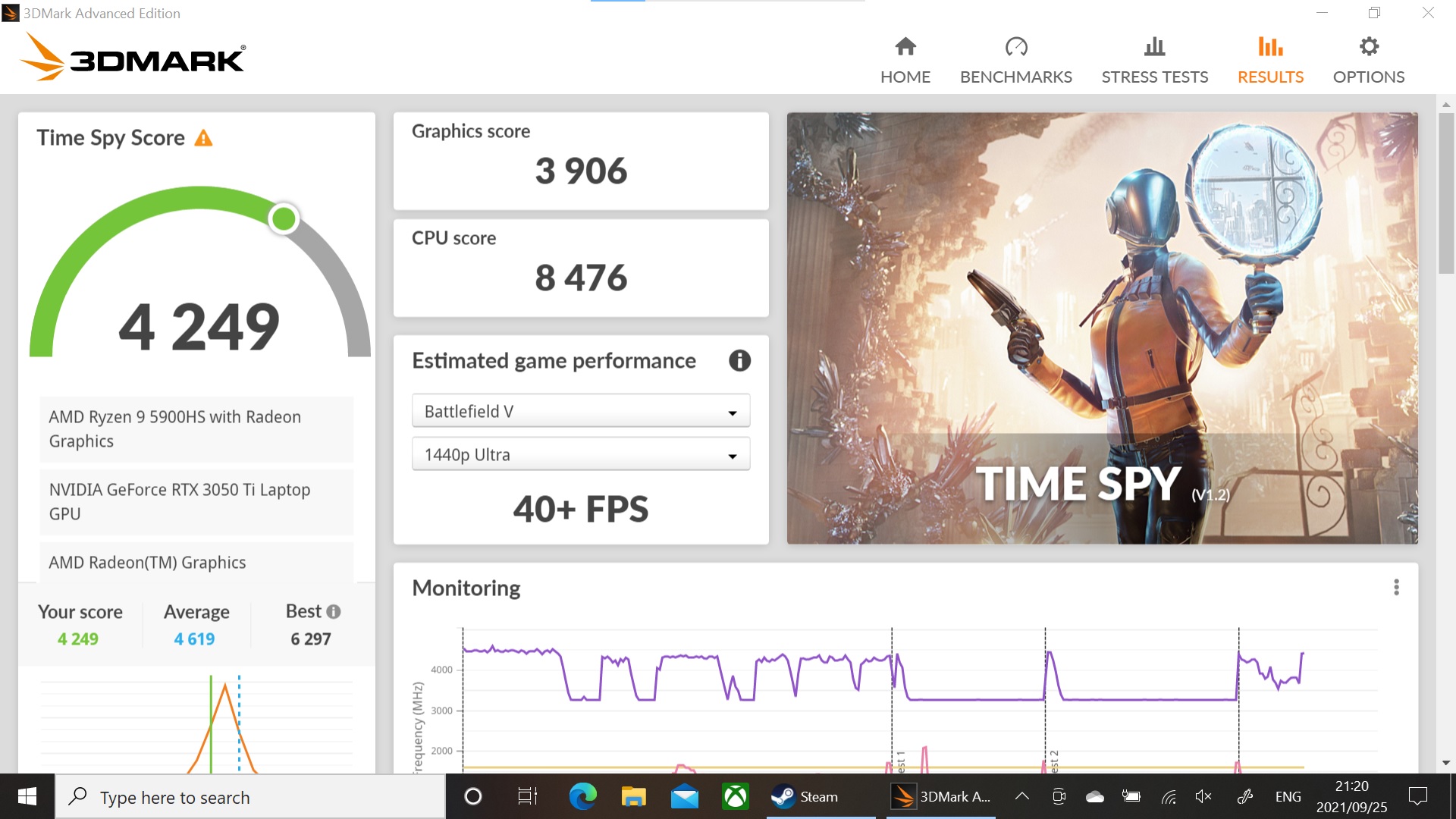 The dock I/O is where you will get the full set of ports that you want:

The dock is meant to sit on your desk and act as your desktop replacement for easy connect and disconnect. However, the dock is light enough and slim enough to fit in a backpack with your laptop so that if you need to take it with you it won’t break your back.

The dock also acts as the full-powered power brick for the laptop to both charge the laptop and power the eGPU. On the go, a 65W USB Type C charger is also included.

The proprietary connector, while powerful, is the one area for concern as if that connector or port is damaged you will have to send the system in for a repair, hopefully, or even replacement and that’s if the damage occurs during the warranty period. This is the problem with all proprietary connectors, if something happens to damage one, most repair shops and even the original manufacturer may not be capable of repairing it. If it happens out of warranty or years after the model you own has been discontinued, you may have no choice but to buy a new laptop even though the one you have is otherwise perfectly usable.

The pros and cons of this system are that it is modular meaning you can buy just the laptop should that be all you want, but if you want the whole package buying the dock can cost just as much as buying the laptop with the RTX3080 dock being the most expensive.

The screen is a touch screen, and the laptop can fold over to transform into a laptop. The switch is near-instantaneous, and the inclusion of a pen makes using the tablet easy to take notes or markup documents. The resolution on this 13.4” screen is 4K and while that may be good for colour accurate work, you need the eGPU for that to be practical and useful and if you are using the dock, you likely have a bigger 4K screen attached to the dock so the inclusion of such a high-res screen on the laptop serves only to impress anyone asking about the specs and to increase battery drain. A simple 1080p screen would’ve been more than adequate.

Performance On the Go and at the Desk

As a gaming laptop the system is impressive, even the 3050 specced one that was provided. Firstly undocked, the laptop and Ryzen APU is good enough for light gaming in Rocket League or CSGO. There are Flow X13 specced systems with a GTX1650 which will give the system a little more power allowing you to play some AAA games, albeit on lower settings due to the lower-powered CPU and the fact that power delivery through the USB Type C charger would not be the most efficient to power a full-powered game.

Once docked, though, the laptop transforms into its secret identity to its superhero persona. Powered by the Mobile Interface the laptop performs admirably and better than many desktops. 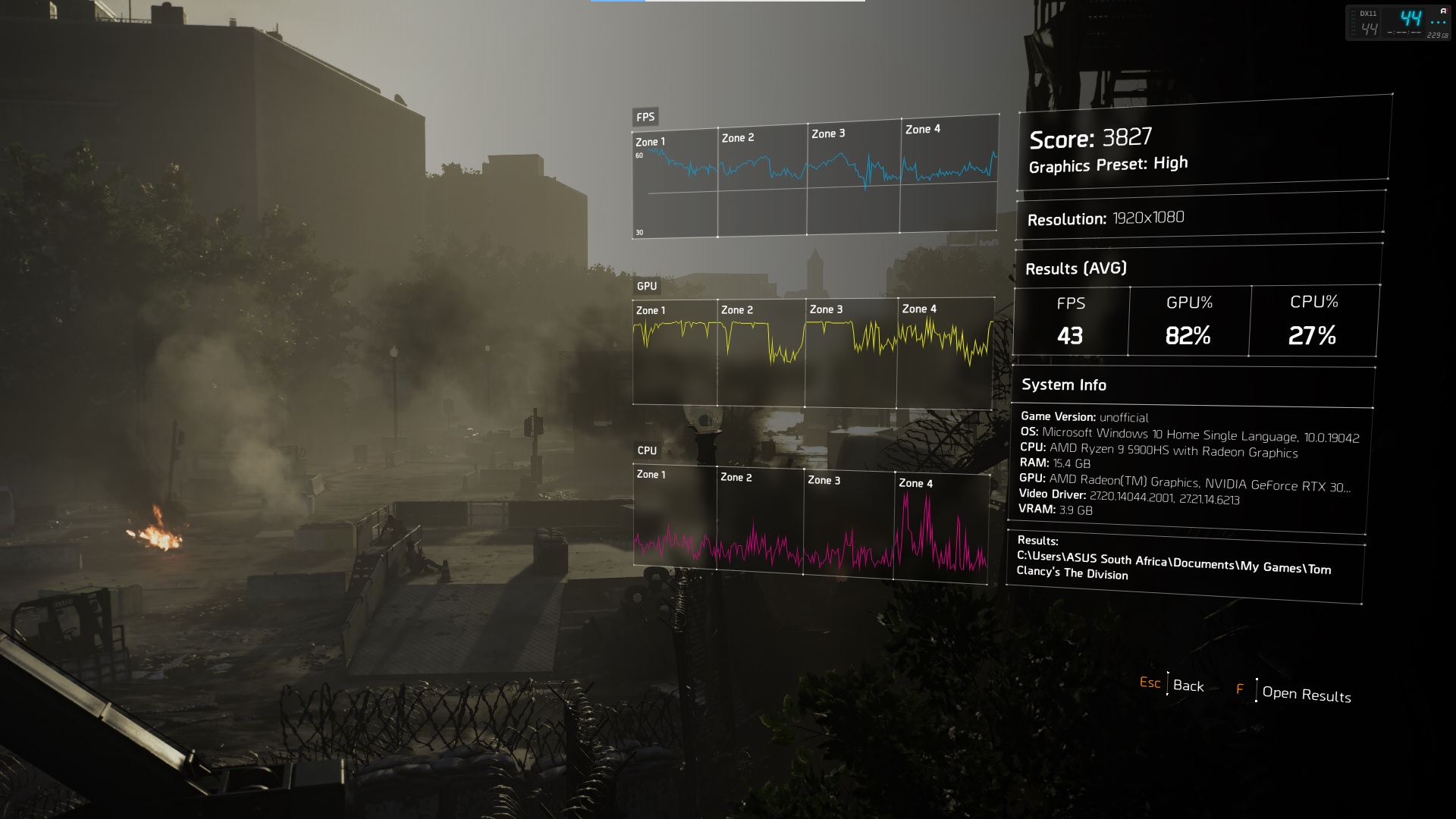 3D Mark as a synthetic test returned a pretty good score with the benchmark stating that Battlefield V could be run on High settings at 1440p to achieve a decent if not exceptional 45FPS. To hit that magical 60FPS mark I would recommend that you drop the settings a little as in a game like BFV a higher FPS is more valued than a pretty game.

Playing Control on Medium settings with DLSS on and raytracing set to medium, the game achieved an average FPS of just under 50FPS. I did try and push settings to high as well as the Raytracing settings to high with the resolution set to 1440p, but even with DLSS2.0 enabled the game could barely manage a stable 25FPS let alone the bare minimum of 30FPS.

Benchmarking the system in Shadow of the Tomb Raider as well as The Division 2 showed that the 3050 is slightly underpowered as the former returned a result of 45FPS at High Settings while the latter managed just under 60FPS. In gameplay testing, The Division 2 bore this result out. If you have the budget for this full system, I suggest rather opting to spend a little more on the 3070 eGPU instead of the 3050 just to get that little bit of a longer lifespan out of your considerable investment.

Thermally the laptop and eGPU performed flawlessly with zero thermal throttling of APU and GPU. The only fault I can find here is that the laptop even with the eGPU connected outputs a fair enough amount of heat and with the one exhaust on the right if you have little room, you will feel the full blast on your hand when you mouse past this area. The palm rest area on this review unit did get a little warm, though not uncomfortably so, but the real area that was a little too uncomfortable was the underside exhaust vents when using this laptop while on the couch. My legs got quite warm from the exhaust while just typing up this review.

The Flow X13 Is a Definite Work/Gaming Contender

The Flow X13 is a wonderfully compact laptop making it easy to recommend for anyone with limited room and who uses their laptop on the go. The dock while expensive is a must-have for creative work and gaming. The dock makes the case for this to be a desktop replacement PC, but just be careful with the Mobile Interface cable and port.

Modular expansion via dock makes this a real desktop replacement

Proprietary connector that if damaged could be difficult to repair

Some heat exhaust making use a little less comfortable than desirable