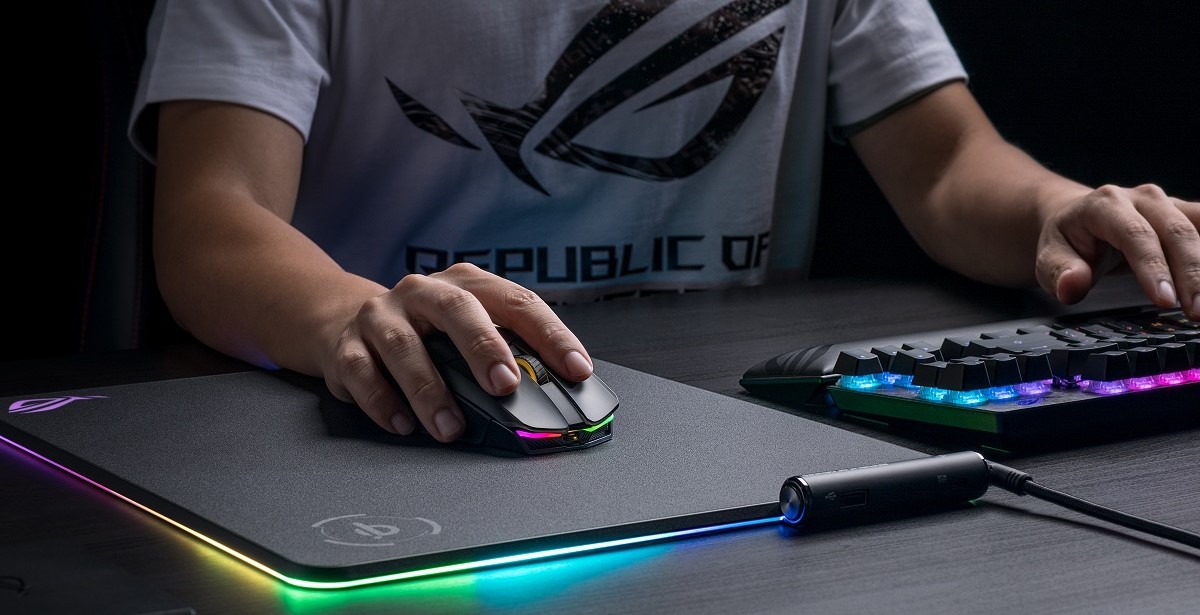 Gaming mice have followed a similar standard for the past couple of years; comfy thumb pad, dpi adjustments, and more mouse buttons than you know what to do with. Oh, and RGB. But what if someone came along and said, “you know what that mouse needs? A joystick”. Well, that is just what ASUS did, and boy, did we not realise how much we needed it before now.

Gaming mice have long been lauded for their ability to enhance a gamer’s experience, from the DPI adjustments, to its design, and most recently, its weight. Though, what gaming mice have never really tried to embrace is something that we never thought would actually add any value – a joystick. 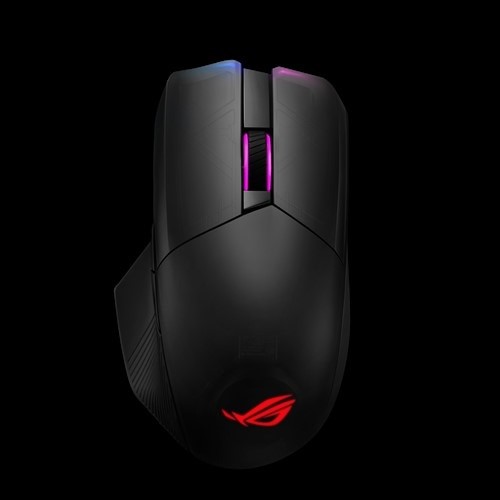 Yes, a joystick – the same thing you use on console’s gamepad. Something that usually replaces the function of WASD keys when jamming on a PC vs. a console, typically used for camera control and movement on console. So what could it possibly do on a PC, you might be wondering, and I wouldn’t blame you.

The ROG Chakram is not only defined by its use of a joystick, but by its all-around incredible use as a great wireless gaming mouse. Chakram uses a 2.4GHz network to connect to your PC, you can be assured of an instant and continuous connection, along with a PixArt 3335 sensor, to ensure every move you make is picked up, at a top dpi setting of 16,000.

The shape is comfortable for most hand sizes, and grips – I use a palm grip for the most part, but occasionally I find myself clawing – and the switch between the two is super fluid. The shortened, but taller, back-end and elongated mouse buttons makes a palm rest comfortable. However, since the switches are brought closer to the centre of the mouse, claw grip users will not suffer any false clicks. 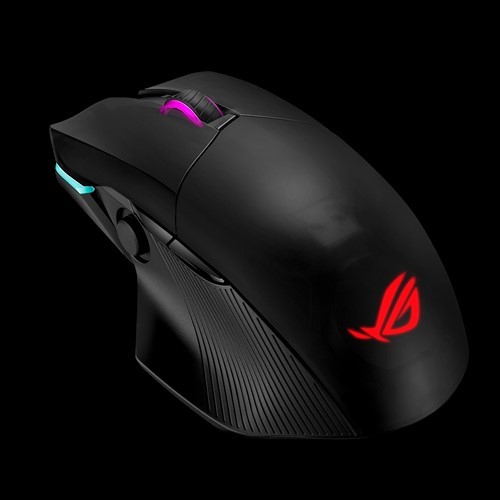 The ROG Chakram boasts a relatively clean design, with some slight grooves on each side of the mouse to improve grip texture. A front view of the mouse gives off a slightly “sports-car” aesthetic, giving it a premium, elegant, yet powerful aesthetic. The panels for both mouse click buttons, as well as the rear panel, are a smoked-out translucent colour, giving you an edgy look into the workings of the mouse, pushing a modern industrialist design.

The removable rear panel is where you can store your personalized badge – if you have a gaming logo, are part of a clan, or just want to add your own style, you can replace the ROG badge that comes with the ROG Chakram, which is illuminated by the RGB lighting underneath. This is also where the wireless USB dongle will sit when you are transporting your mouse, providing a safe and secure place for you to keep your dongle – always ready for use, without the worry of remembering where you kept it.

Analog mode offers a traditional 8-way joystick that you would find on a console gamepad, which can be excellent for movement in flight sims.

Coming back to the star of the show – the joystick. Situated where you would usually find the thumb button (often referred to as the “Sniper” Button), the joystick is a full 360-degree moving addition, offering two different modes; analog mode and digital mode. Analog mode offers a traditional 8-way joystick that you would find on a console gamepad, which can be excellent for movement in flight sims. Though, the digital mode – which offers a 4-way D-pad configuration – was more preferable, as I was able to configure the programmable joystick to be hotkeys for actions in competitive gaming. 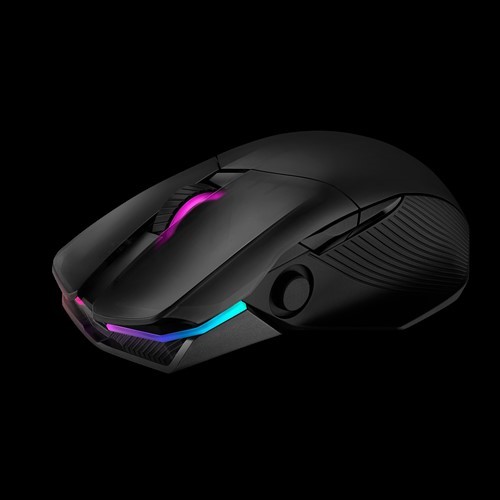 If you don’t want to use the joystick at any particular time, you can swap out the pre-installed medium-sized joystick for a flat disk, that elegantly conceals the joystick, giving the appearance of a standard gaming mouse, sans thumb button. There is also an added joystick button which is slightly larger and elongated, for those who struggle to get a good grip on the standard joystick configuration.

Outside of gaming, my web browsing and general productivity was made so much easier by the joystick, as moving between tabs, navigating excel spreadsheets, and general office tasks were made so much faster.

Without illumination, the ROG Chakram supports up to 79 hours (you read that right) of play time...

Battery life is also something to rave home about – something that is not always easily said about wireless mice. Without illumination, the ROG Chakram supports up to 79 hours (you read that right) of play time, but with lighting will depend purely on your synchronization with programmes. In my testing, I was never short of a 40 hour play time, though, with lighting on, so you can be rest assured that you will be getting a good amount of playtime off of a full charge. If you don’t have time for a full charge, though, just 15 minutes of charge with the included USB-C connection will net you 12 hours of playtime – though, my testing proved closer to 10 hours but that could be down to lighting. If you are able to get yourself a Qi compatible gaming pad, you won’t even need to worry about putting the ROG Chakram on charge, as it is Qi-charging compatible, so it charges as you play. 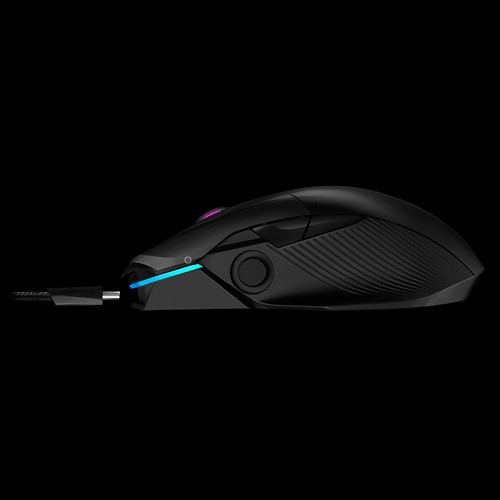 Customisation is a big part of the ROG Chakram. Using the Armoury Crate software, you can adjust three separate profiles, each with their own Dpi settings, lighting configurations, as well as macro assignments. These three profiles can be stored on the mouse itself, thanks to onboard storage, which you can change in the Armoury software, along with battery-saving settings such as Sleep Timer and lighting indicators if your battery is running low.

Overall, the ROG Chakram should be praised for being one of the most daring wireless gaming mice out there, with the inclusion of the joystick, providing the best of both worlds – a PC mouse with gamepad capabilities. The battery life has been the most impressive I have ever seen on a wireless mouse, being able to last a full week of gaming and some light office work on a single charge. Edgy gaming aesthetics are apparent, but the large focus has been placed on what matters most; comfort, performance, and longevity. Literally, the only fault I have with the ROG Chakram, is that it needs more of an “edgy gamer” aesthetic that we have become accustomed to with the ROG brand. Otherwise, it’s essentially a perfect wireless gaming mouse.