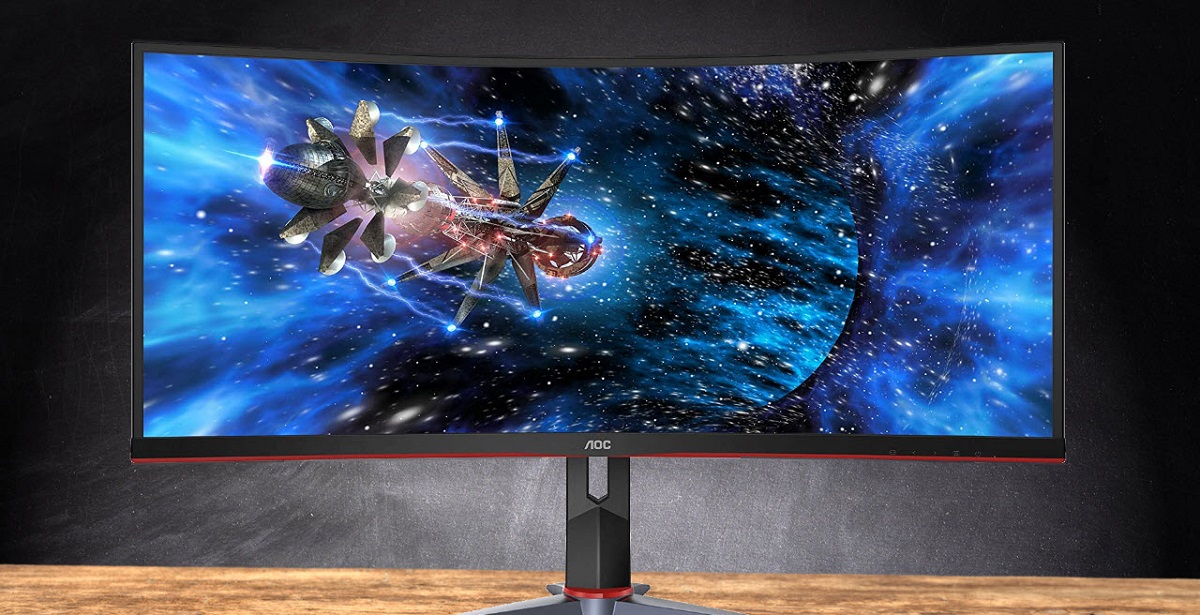 AOC have recently released the G2 range of gaming orientated monitors. Each of the new models have their own unique selling points that differentiate them from their rather tough competition in 2020. We recently looked at the AOC 24G2, which had immaculate colour reproduction, and now it’s time for its bigger brother to get the rundown. The AOC CU34G2X is a 34 inch UltraWide QHD curved gaming monitor and one that certainly looks impressive. Does it deliver in terms of performance though? I’ll get to that in a bit.

First up, the technical details:

With that all out the way, let’s get into the nitty gritty of the monitor itself. First and foremost, the monitor has quite a striking design. It looks absolutely gorgeous. From the moment you open up the rather large packaging, you’ll be quite excited about it. The monitor’s stand in particular, if you’ll excuse the pun, really stands out and perfectly fits in with the rest of the monitor’s design. From the front, the screen panel itself looks great with an almost non-existent bezel framing it. In fact, with the screen switched off, you wouldn’t be able to tell there’s a bezel at all and that’s great. With the screen switched on, you’ll notice a framing region but this hardly detracts from it. The bottom part of the panel has a chunkier bezel but this is to be expected since it houses the control buttons which you’ll need to play around with its settings. 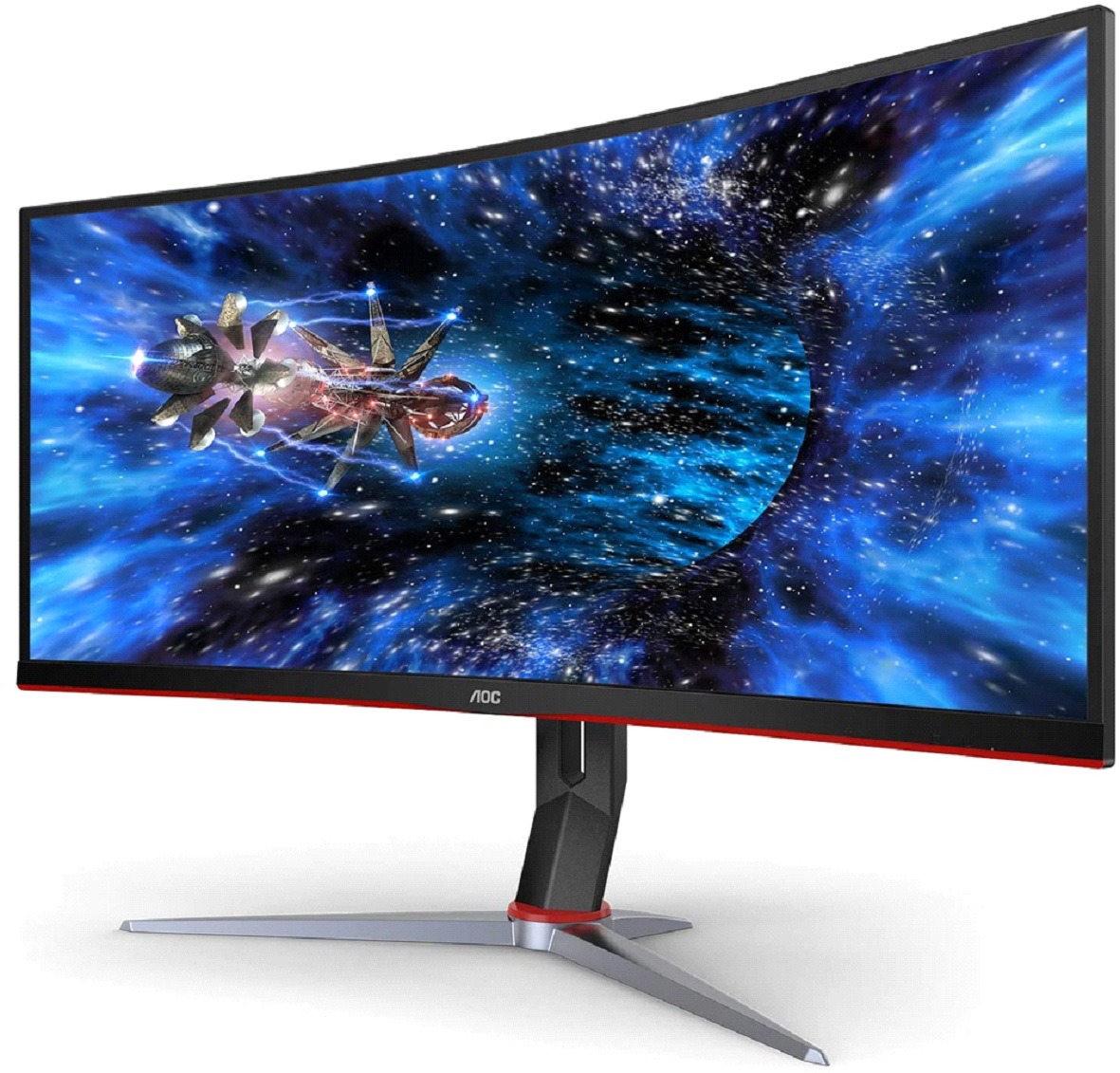 The back of the screen panel looks great and it’s a bit of a shame that it’ll probably be facing a wall in most user’s homes. On the back, you’ll find the slot that the monitor stand clips into. This also doubles as the perfect spot for a VESA mount should you choose to mount the screen instead of having it on its default stand. Once the stand is clipped into place, it feels sturdy and you’ll be able to adjust the monitor’s height quite easily by sliding it up or down for a maximum of 130mm. 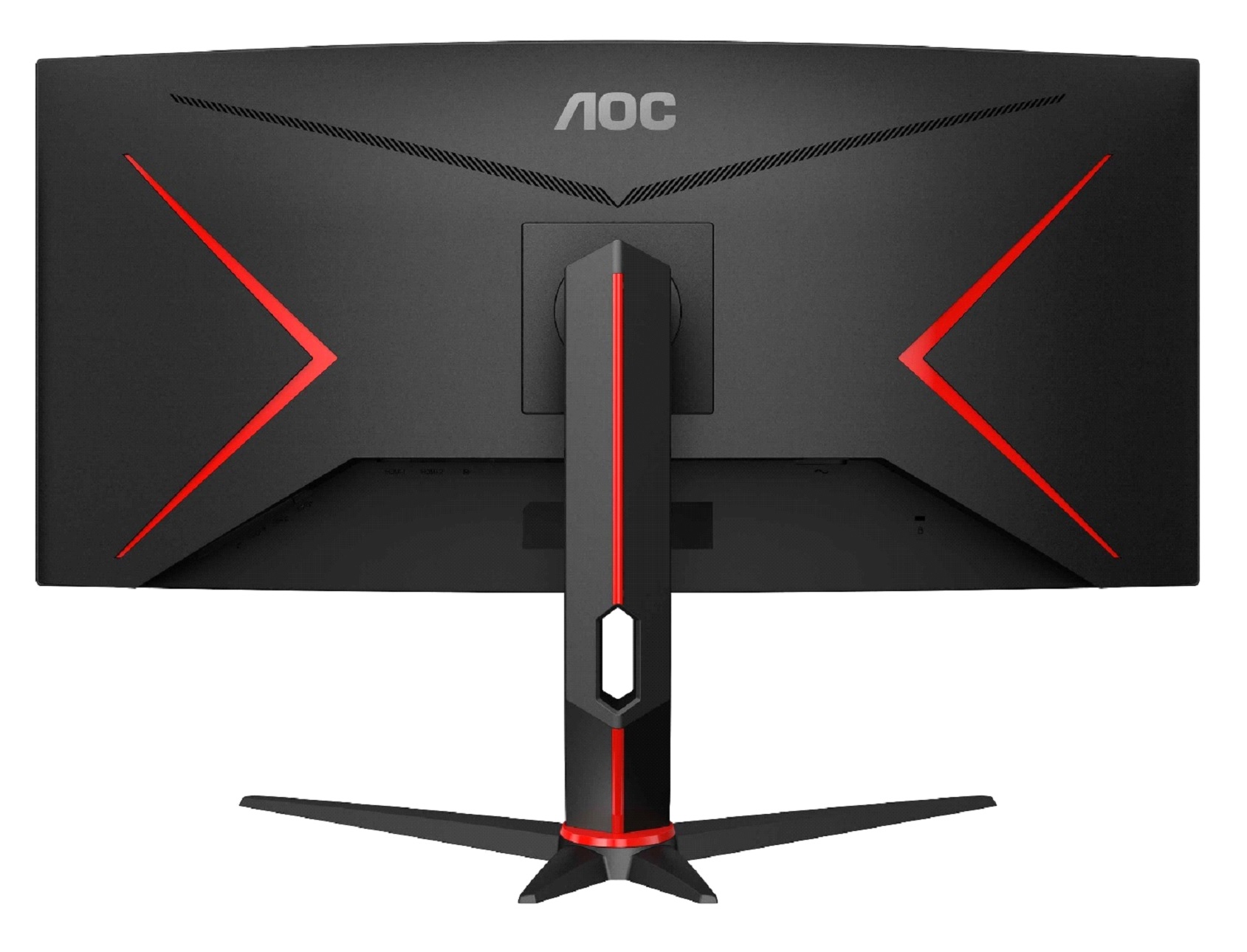 You can also swivel the monitor 30 degrees either left or right from its default position and can tilt it up 23 degrees or tilt it down 5 degrees. The monitor, when on its stand, looks great with its 1500R curvature and a maximum viewing angle of 178/178º for the screen itself. This is noteworthy especially considering that this isn’t an IPS screen. 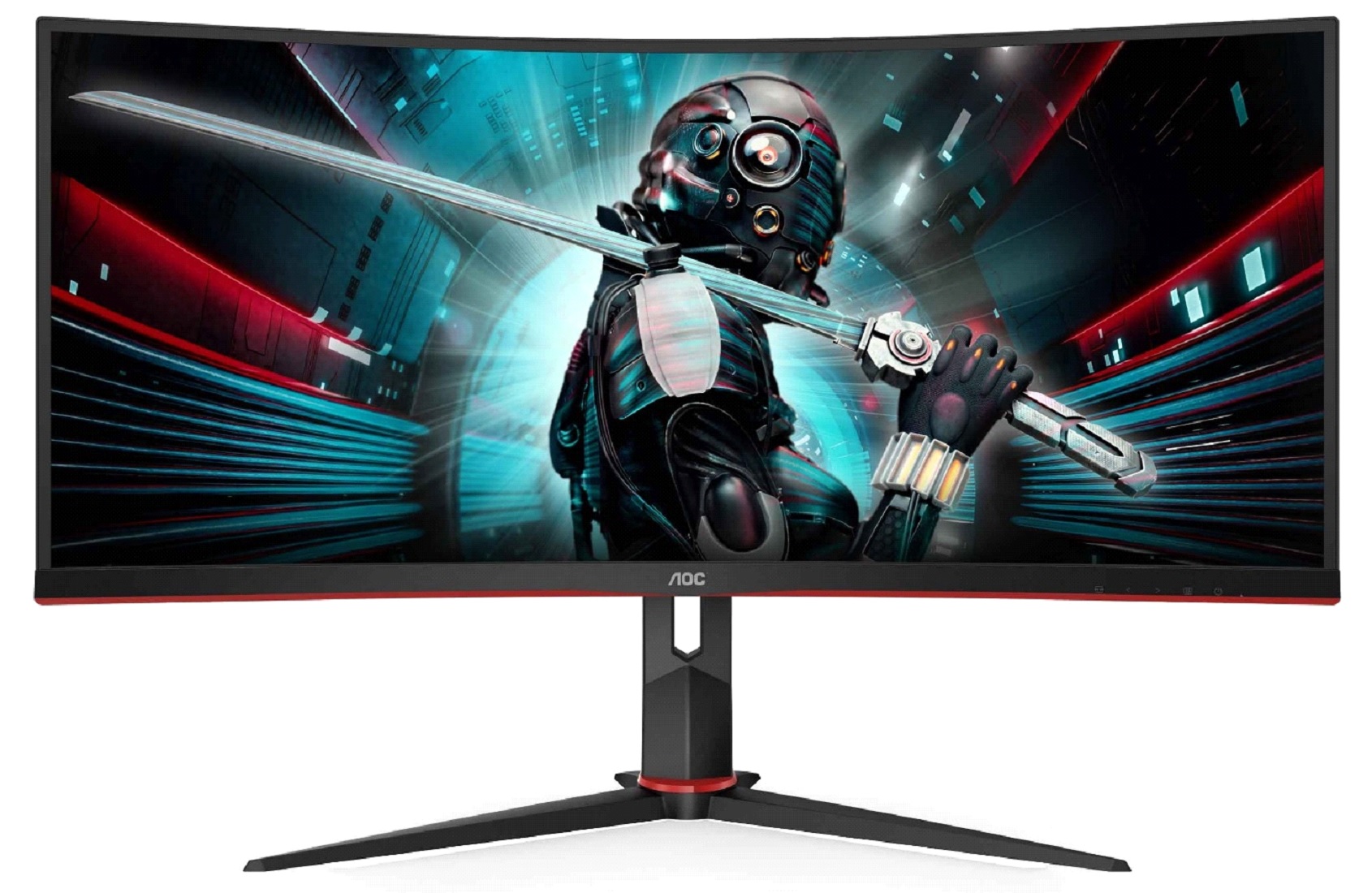 When switching on the monitor, you’ll want to immediately adjust its colour settings to suit your needs. Thankfully the built-in menus allow quite a lot of customization with regards to this and users should be able to find the right combination to suit their tastes. The monitor does have 100% sRGB coverage and while its AdobeRGB coverage is reportedly slightly lower at 84% the colours just seemed quite washed out compared to my Asus VZ239HE IPS panel. The AOC CU34G2X features a VA panel and seeing it side by side with my IPS screen drove home the fact that even though the colour reproduction scores are pretty high, it just doesn’t have that extra bit of oomph that IPS panels can deliver. Quite a bit of a let down here if I’m completely honest. 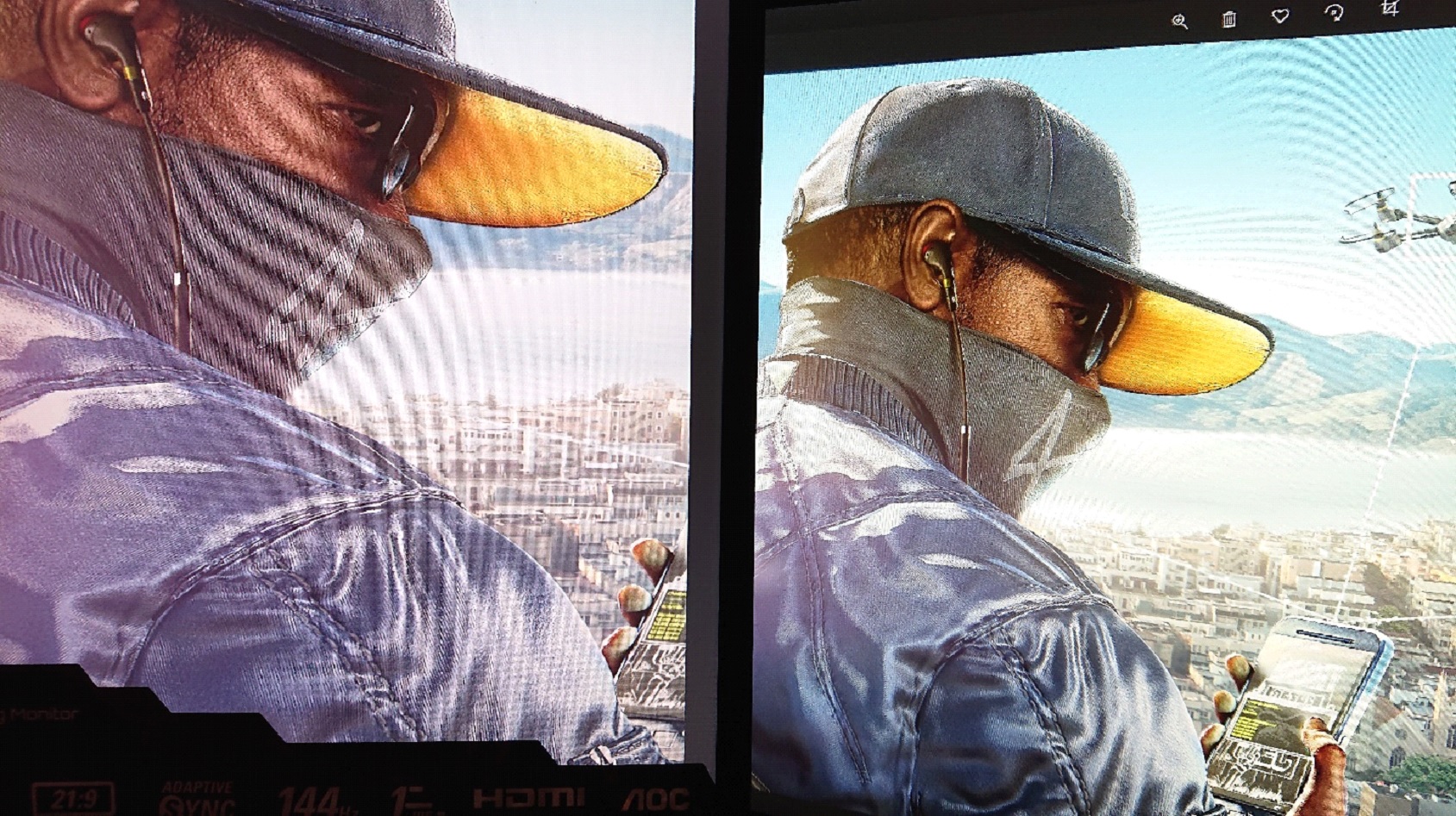 If you opt to use the included HDMI cable, you’ll be able to run the monitor at a maximum of 120hz at a lower resolution of 2560x1080. At any of the higher resolutions you’ll be dropped down to 100hz as the maximum refresh rate over HDMI. If you want to make use of the full 144Hz, you’ll have to use a Display Port 1.4 cable. Running the monitor with a Display Port cable will also allow you to output a maximum native recommended resolution of 3440x1440 with an optional upscaled 4K x 2K resolution at a lower refresh rate depending on your display settings.

The AOC CU34G2X supports Freesync and this worked perfectly with my AMD RX590. The true test of the monitor’s mettle however obviously lies in actually using it for gaming and I’m happy to report that at 144Hz, playing a game like Counter Strike: Global Offensive was terrific. Mouse movement and gameplay just felt so smooth throughout and quite a step up over the default 60Hz I’ve become accustomed to. The monitor’s large size also allows for more peripheral vision in games which depending on your tastes, is something that may appeal to you. If you plan to use the AOC CU34G2X for work purposes as well as gaming, you’ll find the extra screen real estate quite welcome. Oh and it even has a headphone jack which is quite a useful add on for a screen to have. 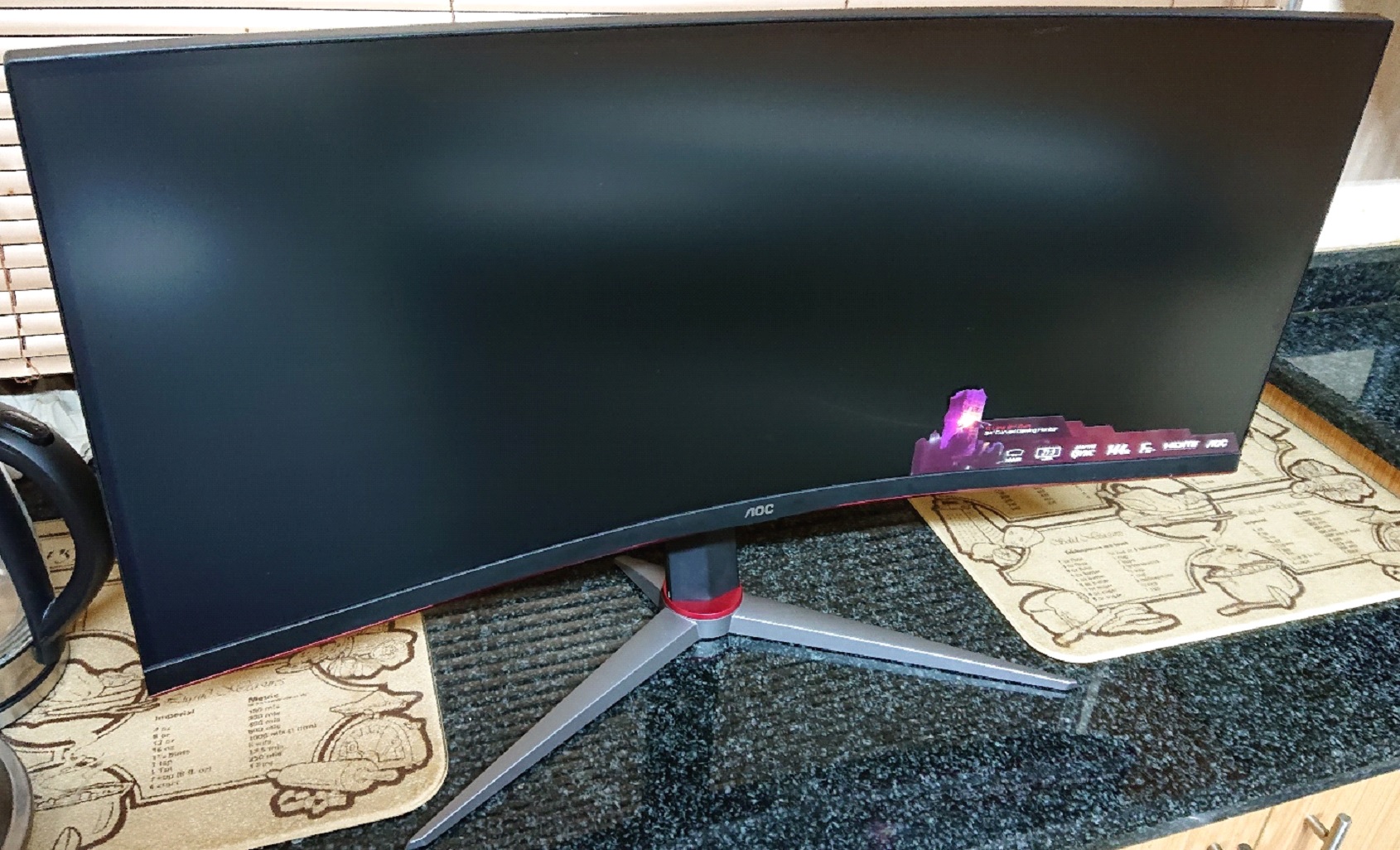 At 300 nits brightness, the AOC CU34G2X is not exactly blinding but thankfully it does feature a dimming mode to help save your eyes some strain. There also seems to be some HDR support with the monitor sporting an HDR Game mode that truly makes the image quality pop. Playing Resident Evil 2 with this enabled was quite a cinematic endeavour. It may not be HDR10 certified but the basic HDR support it has certainly does make a significant difference.

Since most gamers these days play on more than just PC, I attempted to use the monitor for standard PS4 gaming and that was less than stellar. Playing a game like Sekiro: Shadows Die Twice was rather disappointing with the video being somewhat stretched at 1080p being displayed at 60hz. If you have a PS4 Pro, your results may differ but alas, I could not try this out. 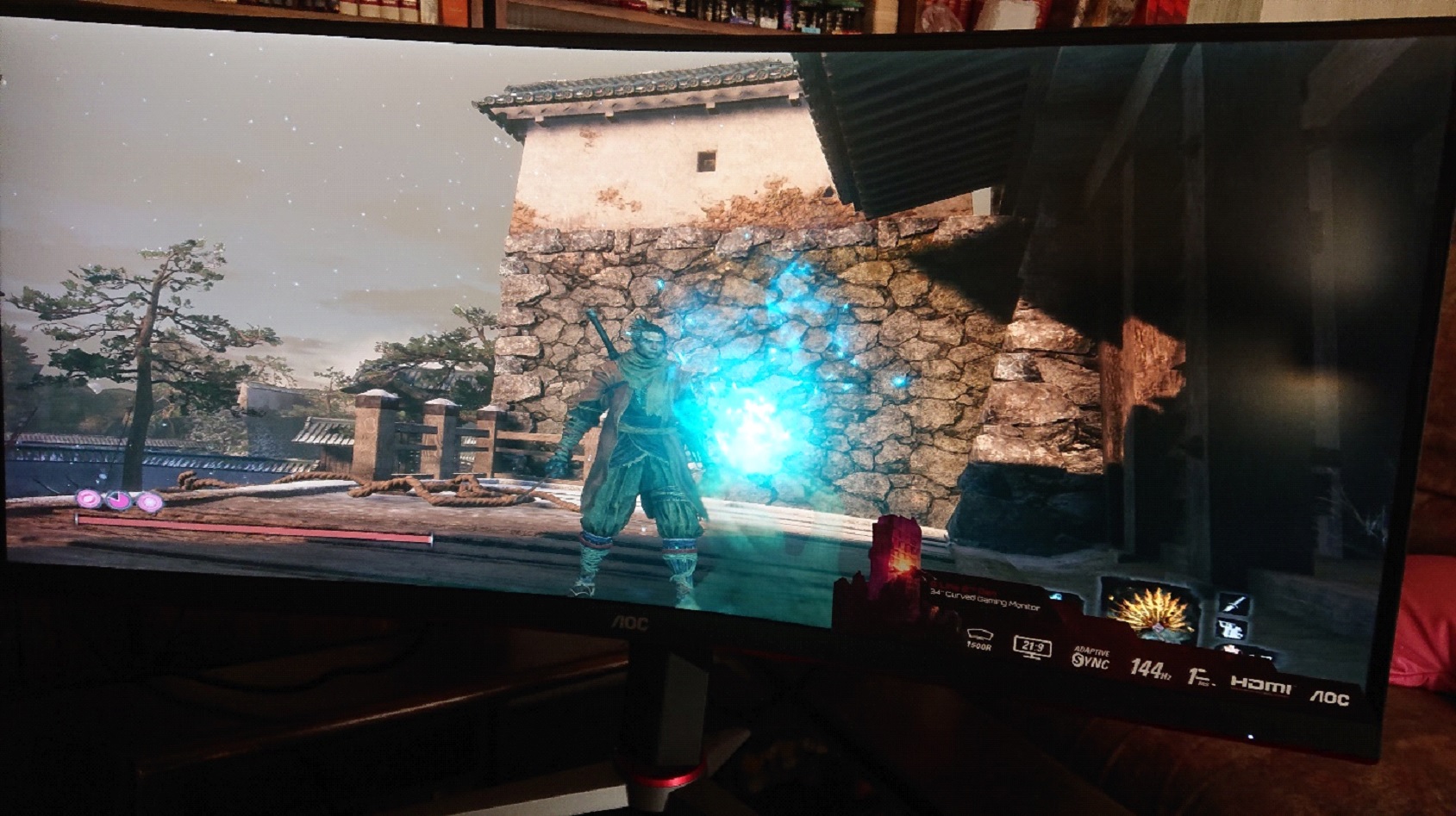 Overall, the AOC CU34G2X is a great 21:9 ultrawide panel that is ultimately bogged down by a couple of mediocre things. The fact that it’s not an IPS panel in 2020, can only display 144hz over display port and has less than stellar colour reproduction compared to a monitor that’s a fraction of its price, kneecaps it heavily. There’s also the fact that for some absolutely insane reason, the monitor is severely overpriced in South Africa coming in at a retail price of R14799. The screen should be $599 and at that price, it would be a great budget ultrawide display that gamers could consider if they don’t want a dual or tri-screen setup on their desks. However, with the local pricing being so exorbitantly high, I would rather suggest picking up the AOC 24G2 instead since you’ll be getting a far better product and far more value for your money.

Not an IPS panel

Not that many games actually support ultrawide screen resolutions

144Hz only over Display Port