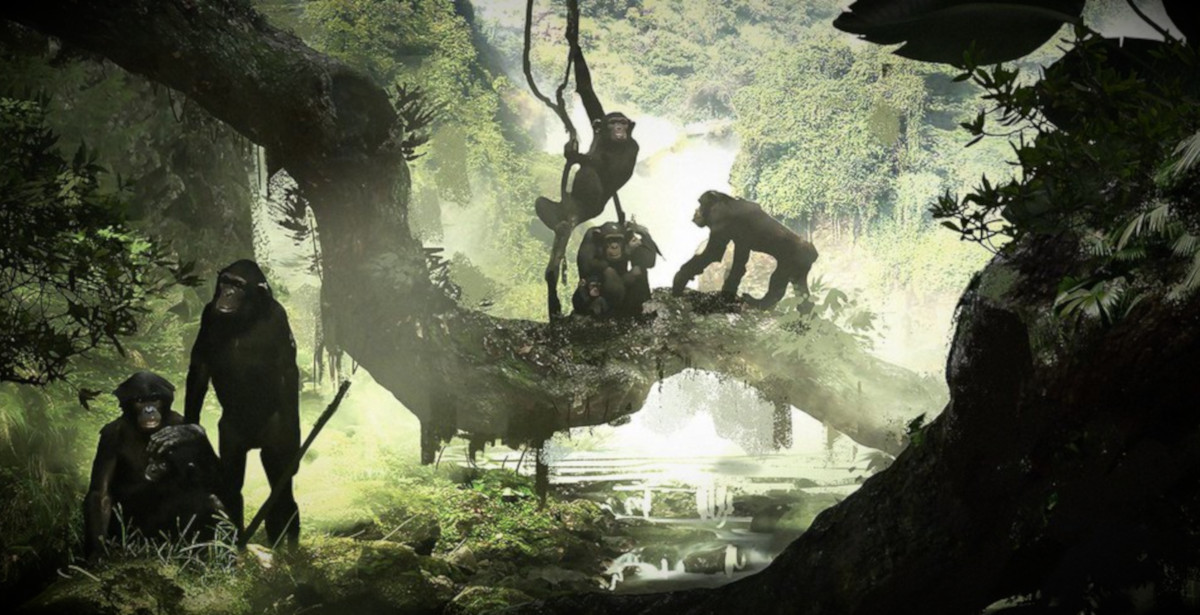 Ancestors: The Humankind Odyssey is complex survival-game with a distinctly human-twist. Rather than the common post-apocalyptic setting, you take control of a clan of hominids, starting out in (presumably) East Africa circa. 10,000,000 BC, tasked with surviving and evolving over the next 8 million years. The game was designed by Patrice Désilets, creator of the Assassin’s Creed series, and it has several similarities to the 2007 original - it’s a fantastic proof-of-concept with some ambitious ideas, but is often let down by finicky controls and some inherent limitations of open-world games that I’ve talked about before.

After a brief opening cinematic that highlights the hostile world your clan inhabits, your first goal is to get to grips with the controls and scramble back to your settlement as an infant, dealing with a heightened state of fear that obscures your vision and distorts your hearing (get used to this now!). Complete this brief tutorial, and you’ll find yourself in control of an adult. It sets the tone, the gloves come off, and you’re introduced to one of the first hurdles in Ancestors: The Humankind Odyssey – getting started. The first time I paused the game, the text “hint” simply suggested I interact with the world as if I were teaching these early hominids to be modern Homo sapiens; something easier said than done. 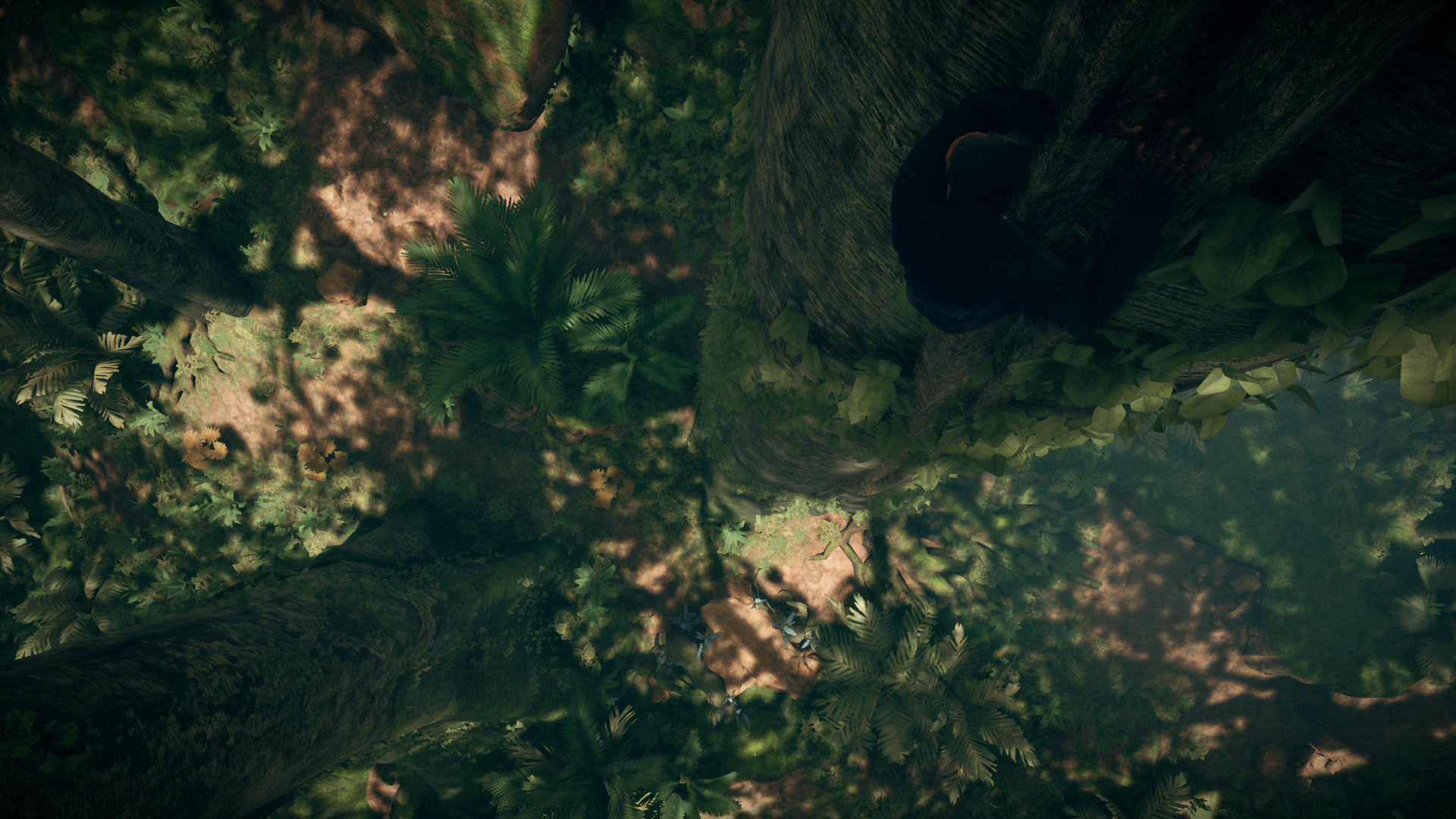 Ancestors: The Humankind Odyssey absolutely nails our predecessors reliance on living in the trees to avoid predation.

The first time you play Ancestors: The Humankind Odyssey, you’ll want to ensure pop-up tutorials are enabled, all HUD elements are displayed, and contextual-action prompts are always visible. Take note of these seemingly mundane tutorials (which’ll say something profound like: “you can move an object between hands using left bumper”), and spend some time switching between your different senses (intelligence, smell, and hearing) to examine your surroundings for resources and threats. Playing around with these systems – preferably within the safety of your sheltered starting camp – will quickly reveal the sheer multitude of interactions available.

Traversal is, for the most part, simple. Your early hominids are masters of climbing and will spend most of their time in the tress until later stages of evolution. Thick trunks and cliffs are grabbed and scaled automatically, and you can swing through dense branches in the canopy to avoid the ground (though, far too often, I’d misjudge what was navigable, plummet to the ground, and break bones). Grabbing, examining, and altering objects (often using other objects) is core gameplay mechanic that’ll lead to most of your important discoveries – like making pointy sticks for fishing and defence, or stripping plant leaves to create fibre needed to patch bleeding wounds. More active actions - like grooming fellow clan members, dodging predators, or counterattacking (everything, other than your own clan members, hates you) – rely on a simple hold-and-release mechanic that is confusing at first - until you master the audio prompt timing. 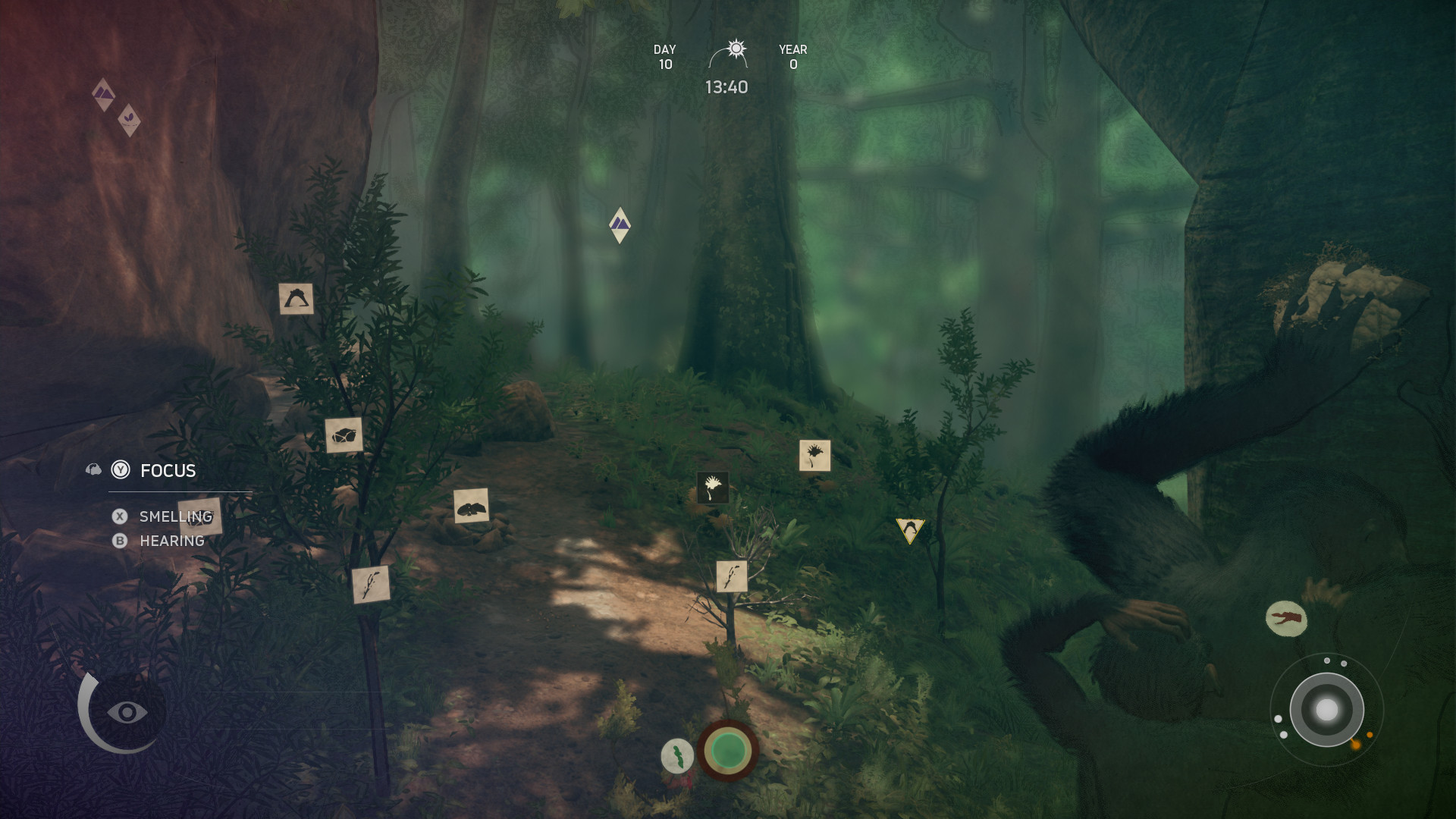 Here’s another way Ancestors: The Humankind Odyssey reminds me of Assassin’s Creed! No wonder the infant looks so confused.

Despite the concerns I raised in the opening paragraph, make no mistake, Ancestors: The Humankind Odyssey still offers more interactivity with the world and its inhabitants than any open-world game to date. In addition to the aforementioned mechanics, you can:


However, despite the ambitious premise, these interactions are still limited by what the developers have programmed, and discovering these combinations involves a lot of repetitive trial-and-error. Ancestors: The Humankind Odyssey is still a video game, and this means the evolution of your clan is ultimately limited by your ability to understand and game the underlying systems. For every action – and especially new actions – you’ll trigger the growth of neuronal pathways and unlock evolutionary feats along one of four branches: Motricity (think item manipulation and traversal skills), Kinesics (expanded clan interaction), Perception (improved use of your senses), and Memory (the ease of identifying environmental resources or threats). 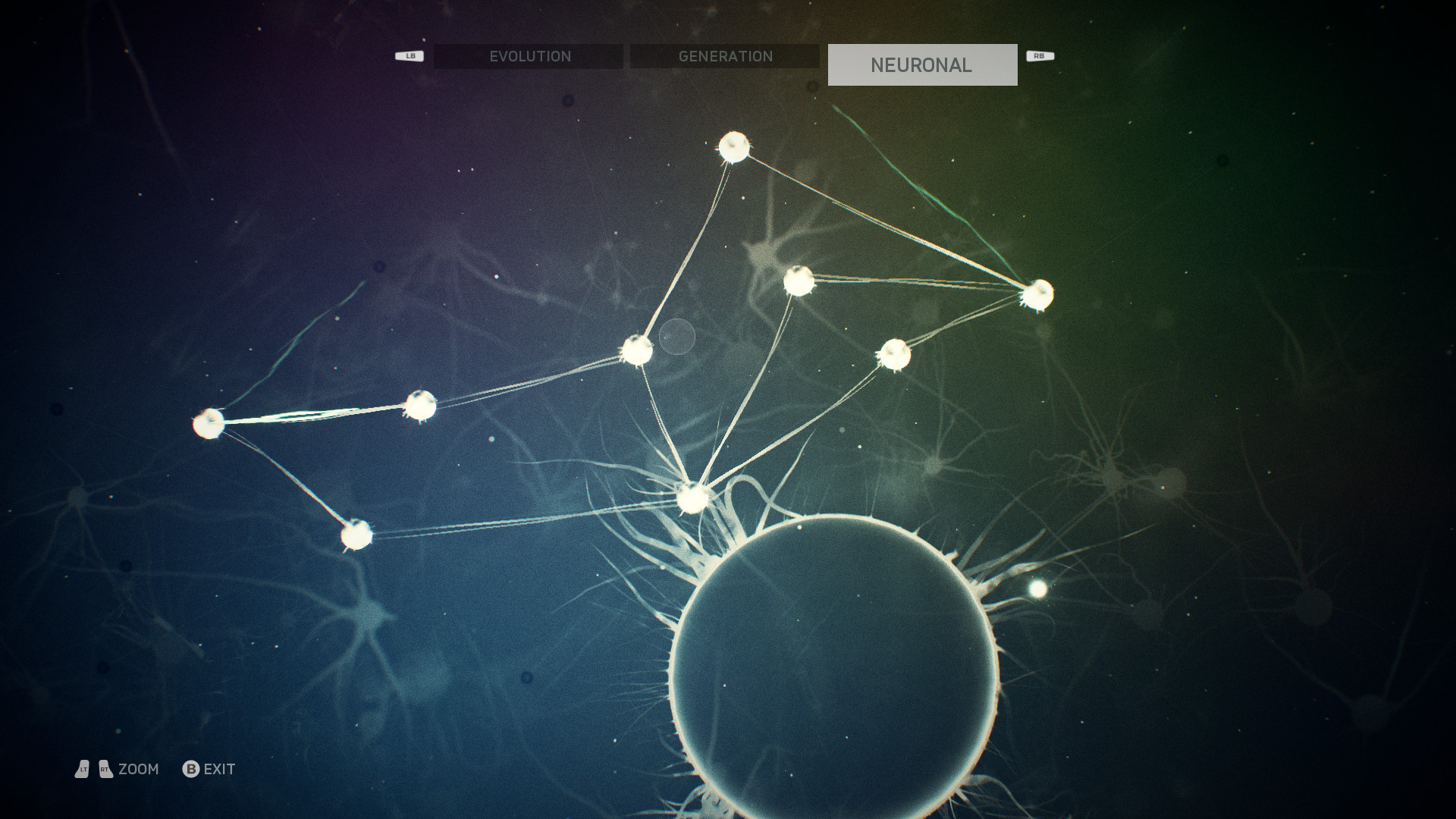 Unlocking new neuronal links is the equivalent of levelling up a skill-tree in other games. If I could learn at half the rate my digital hominids did, I’d have taken over the world by now.

New skills provide permanent boosts for current and future generations, imitating a conventional skill-tree. Some of these "upgrades" feel rather mundane, but they ultimately increase your ability to interact with the world and speed up the rate of learning. Once you’ve achieved several evolutionary feats, you’ll evolve as a species, jumping forward several hundred thousand years (seemingly dependant on the number/type of advancements), and beginning the process anew. In an attempt to keep you moving forward, Ancestors: The Humankind Odyssey includes a few unique events, such as an early meteor strike that gives you your first opportunity to engage with fire.

...between these moments of discovery, progression can begin to feel rote.

When everything comes together, like the first time I created sharpened sticks and discovered I could collect honey from hives and spear crayfish in my local water source, it was thrilling. You drastically improve your species chance of survival and feel ready to push out further. However, between these moments of discovery, progression can begin to feel rote. You spend far too much time scanning the environment to highlight resources (and “rationalise” it); you need to run furiously towards orbs of light to overcome your fear of the unknown (?) every time you move further away from your settlement; having absolutely every other living thing try kill you gets infuriating; and the injuries you accrue leave you with a crippled stamina meter, dragging down the pace. 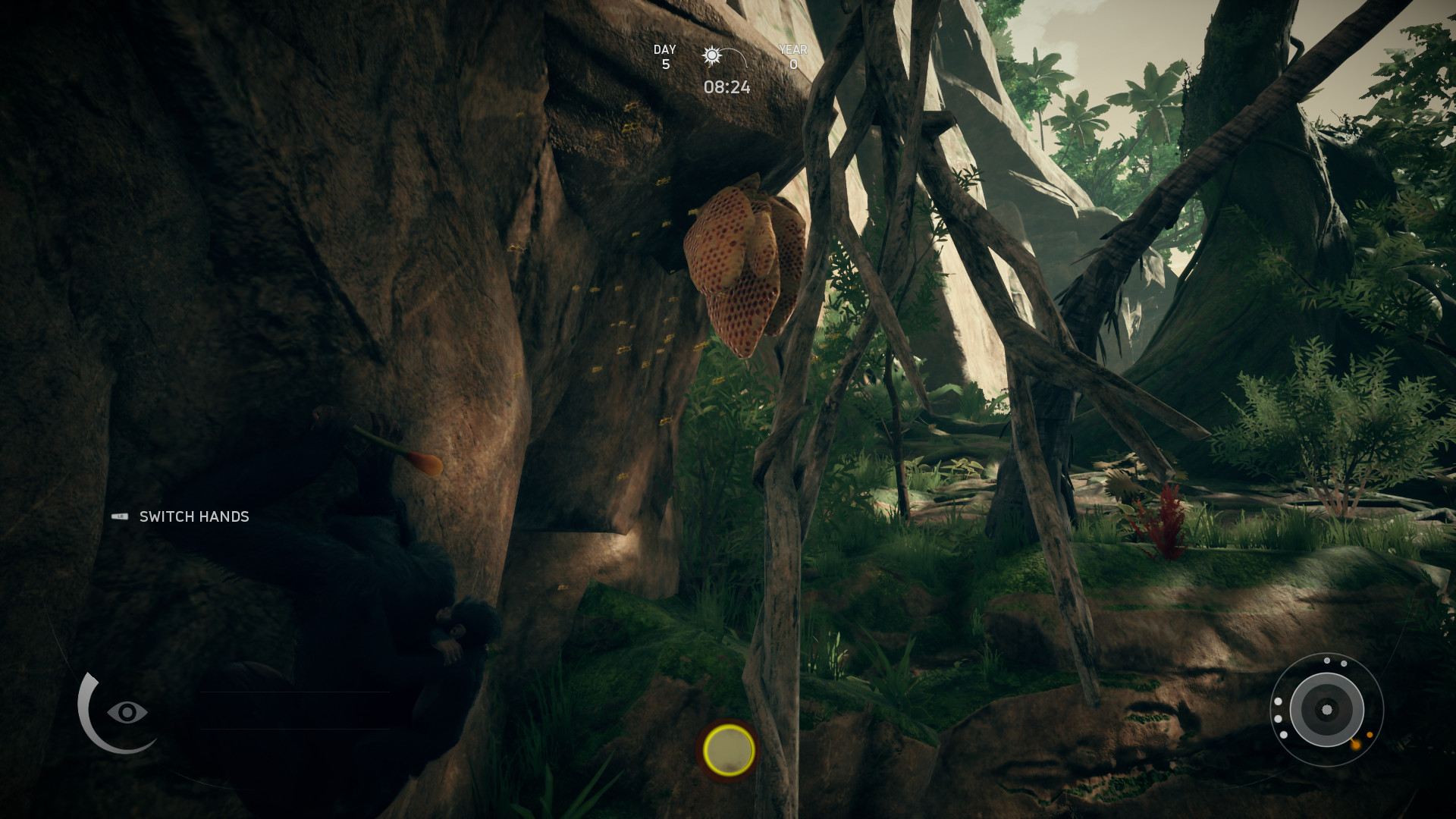 Embarrassingly, it took me several hours to realise there was a bee hive directly above the starting settlement. Figuring out how to harvest honey was a great moment, especially after numerous failed attempts at throwing rocks.

The last point to touch on is the presentation. For what is effectively an indie title, the visuals and animations are solid, capturing both the look and feel of unspoilt wilderness (especially during dawn and dusk), with only a few animations bugging out when targeting certain objects. The visual elements are backed up by exceptional audio, ambient sounds, and a beautiful soundtrack that makes the entire experience feel far more serene than it is.

Despite several flaws, I enjoyed my time with Ancestors: The Humankind Odyssey and would recommend it as an experimental title (especially at the $30 price point), but only in short bursts. Spending two or so hours exploring, advancing, and relocating my clan was satisfying, but sometimes I set out only to end up poisoned, cold, bleeding, and crippled, hobbling back to my settlement an hour later with nothing gained, just wanting to turn off the game in frustration. There’s plenty of content here and I can't deny the ambition on display, but there's no doubt it'll bring up the old debate of realism vs. gameplay considerations (even the repetitive gameplay makes contextual sense).

Note: Ancestors: The Humankind Odyssey is scheduled for release on the Xbox One and PlayStation 4 this December.
7

A multitude of ways to interact with the world

Hundreds of tools to craft

The thrill of gamified evolution...

...but this involves a lot of repetition

Tea
Great review! I love the premise of the game. Ultra excited for the console release in December