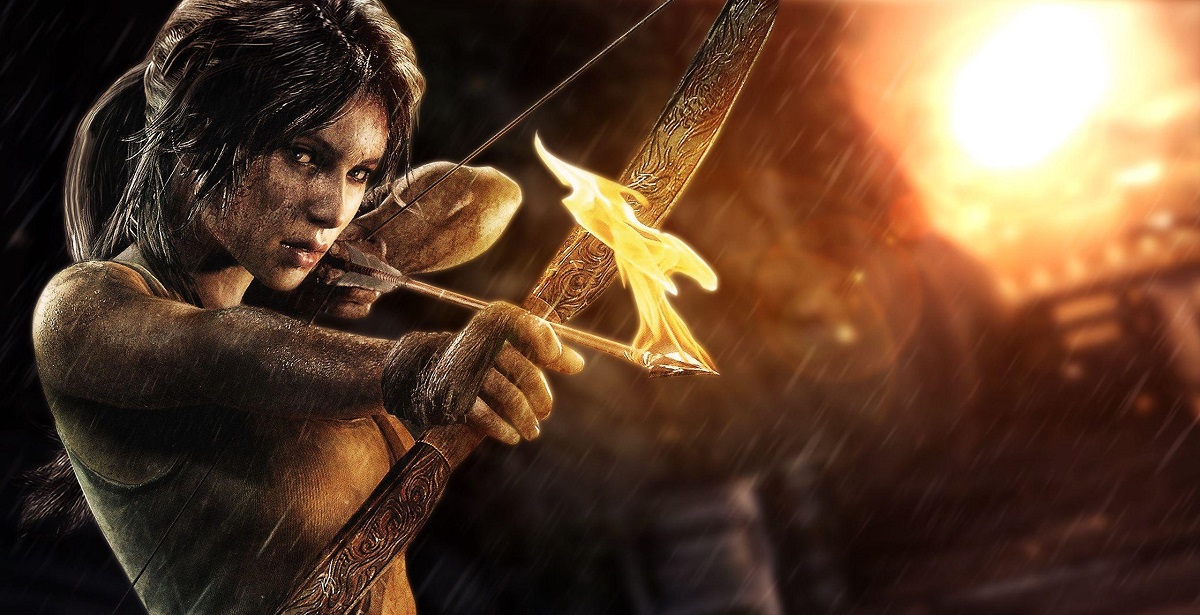 As someone who played and loved the Core-developed Tomb Raider games, from 1996’s Tomb Raider through to 2003’s The Angel of Darkness (it honestly wasn’t that bad!), I was still psyched to see what Crystal Dynamics could do with the IP. I was an equally massive fan of their Legacy of Kain and Soul Reaver games and figured they could do little wrong given the similar genre.

Their 2006-2008 trilogy did an admirable job of reviving the IP. Lara was stylishly-reimagined for the action-packed and set-piece heavy Tomb Raider: Legend, which kicked off a new overarching narrative. Next up was the thoughtfully-remade Anniversary, which struck a near-perfect balance between original and tweaked locations (while still working events into the new trilogy). Finally, Underworld wrapped up the narrative arc, while massively expanding the scale and complexity of the environments (albeit not without messing up several other elements and feeling unpolished at launch).

After Underworld, it felt like the Tomb Raider IP took a back seat for the rest of the generation, giving Naughty Dog’s Uncharted trilogy free reign to set a new standard for cinematic action-adventures. Then, at the tail-end of the 7th console generation, two years after Uncharted 3: Drake's Deception released, Crystal Dynamics rebooted the series, promising a new origins story for Lara in the simply named Tomb Raider (2013). It looked great in trailers and previews, but the suggestion of a change to open environments and an XP-driven progression system made me nervous. It was a period when every big-budget “AAA” publisher pushed to make their games “open-world”, often sacrificing pacing and finer details for sheer quantity and scale. Thankfully, my fears were mostly unfounded. 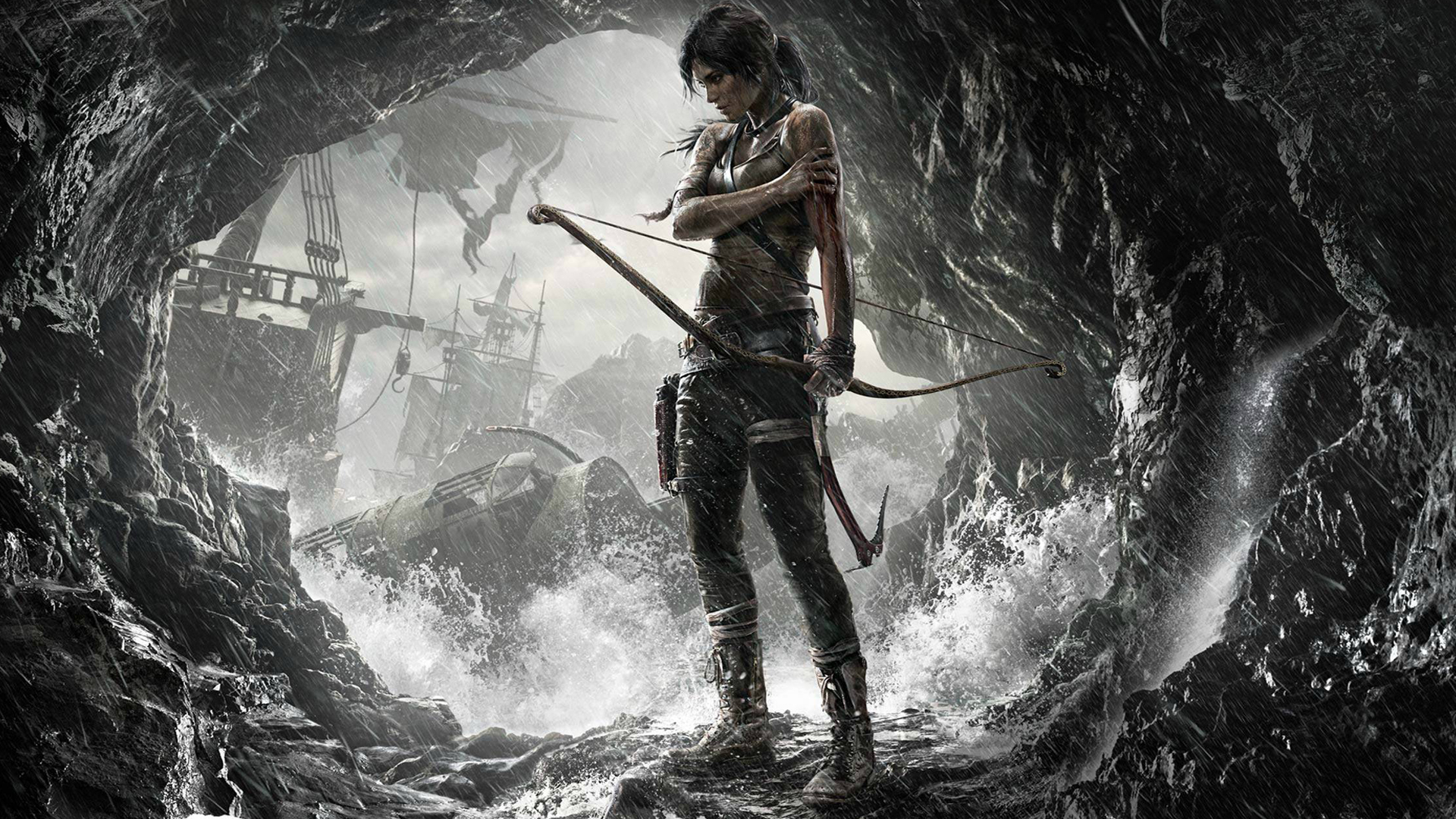 There was a time I’d have considered Tomb Raider (2013) the best of the 2013-2018 trilogy, probably right after completing a 100% run in the sequel back when I had more time and less sense. The tight focus, brisk pace, and relatively short run-time were all positives. However, returning to the sequels recently, I was reminded just how much time is spent slogging through man-made (or man-modified) locations, with mythical temples and supernatural elements reduced to action-packed set-pieces you blow through in minutes. To its credit, it was still a solid action-adventure reboot that brought the IP back into the limelight, redefined Lara’s origins, and laid the foundations for the much-improved sequels.

Lara was reimagined as a young archaeology student on an expedition to find the ancient kingdom of Yamatai and evidence of its supposedly immortal queen, Himiko. After suggesting the team sail east into the “Dragon’s Triangle” – think constant storms and missing ships – their vessel runs aground leaving Lara separated from her team. This kicked off a 12-15-hour adventure that took the player across and below the island, forcing them to deal with the world’s most aggressive wolves, a woman-sacrificing cult of stranded sailors, their painfully-cliched evil leader – the first of several elements you’ll see repeated throughout this trilogy – and, briefly, undead warriors. Along the way, Lara would meet up with her mentor, lose several members of her crew, get teary-eyed, and then get back to murdering. If you were a compulsive hunter of collectibles, you could discover two coded messages that referred to an organisation called “Trinity”.

The narrative was clearly designed to demonstrate Lara’s progression from a young and overwhelmed student to an extremely-capable and hardened explorer. It was a good idea, but the execution was questionable. Lara goes from scrambling through bushes terrified of wolves and cultists (for about an hour), before killing her would-be rapist/murderer, and then moving on to kill several hundred cultists and undead warriors over the next dozen hours. It didn’t feel deserved, but from a gameplay perspective, it was the right choice. That opening hour is painfully slow and heavy on tutorials (another recurrent design) and part of the reason I always struggle through the opening sequences of these games. 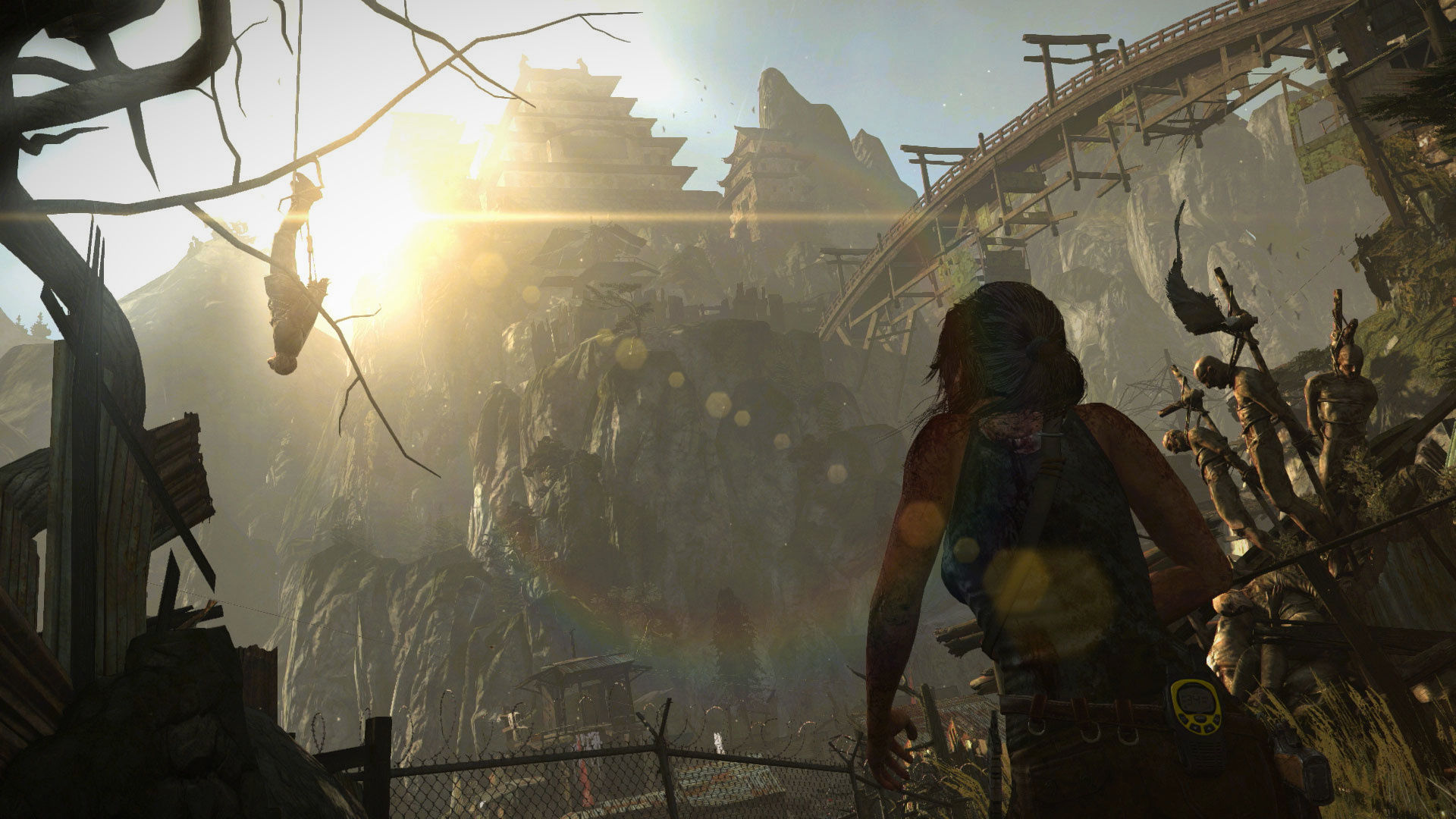 Tomb Raider (2013) has some sprawling and beautiful environments, but far too much time is spent in areas stuffed with man-made structures and the “tombs” are insultingly small.

Thankfully, Tomb Raider (2013)’s new gameplay loop more than made up for the inconsistently-paced plot and fast-tracked character development. Several mechanics and themes from Crystal Dynamics’ first trilogy return intact (the simplified traversal and the hunt for artefacts that grant immortality) but they clearly took a few cues from Uncharted, such as blatant environmental signposting, absurd set-pieces, and frequent checkpoints that ensured the action flowed, even if that often meant you were just pushing forward on an analog stick and occasionally tapping the jump button.

What I enjoyed the most was the level structure that was not “open-world” in the traditional sense. There were several large hub-areas connected to linear paths – which felt more like classic Tomb Raider levels – and inevitably looped back to the hub (yet another recurrent design). With several distinct landmarks visible from most locations, the island still felt like a cohesive landmass, maintaining an impressive sense of scale despite being broken down into playable zones.

That said, Tomb Raider (2013) still copied some elements of open-world design, packing in an insane number of collectibles and challenges, ranging from interesting journal entries to bland find-X-number-of-Y tasks. They weren’t mandatory but they offered XP that tied into the new progression system. Almost every in-game action would reward XP, with bonus XP given for more complex tasks (like stealth-stabbing someone rather than simply gunning them down). Every level gained would earn you a skill point, which could be invested into one of three skills trees that focussed on survivability, combat, and crafting. Hell, there were skills that existed to help you find collectibles that unlocked more XP, for more skills. Crafting was its own time-waster, as you harvested man-made scrap and natural resources to upgrade your gear. For better and worse, you were never short of something to do in Tomb Raider (2013) and, on more than one occasion, I found myself questioning my values as I butchered another hapless animal for a few XP or some hide to craft a new holster. 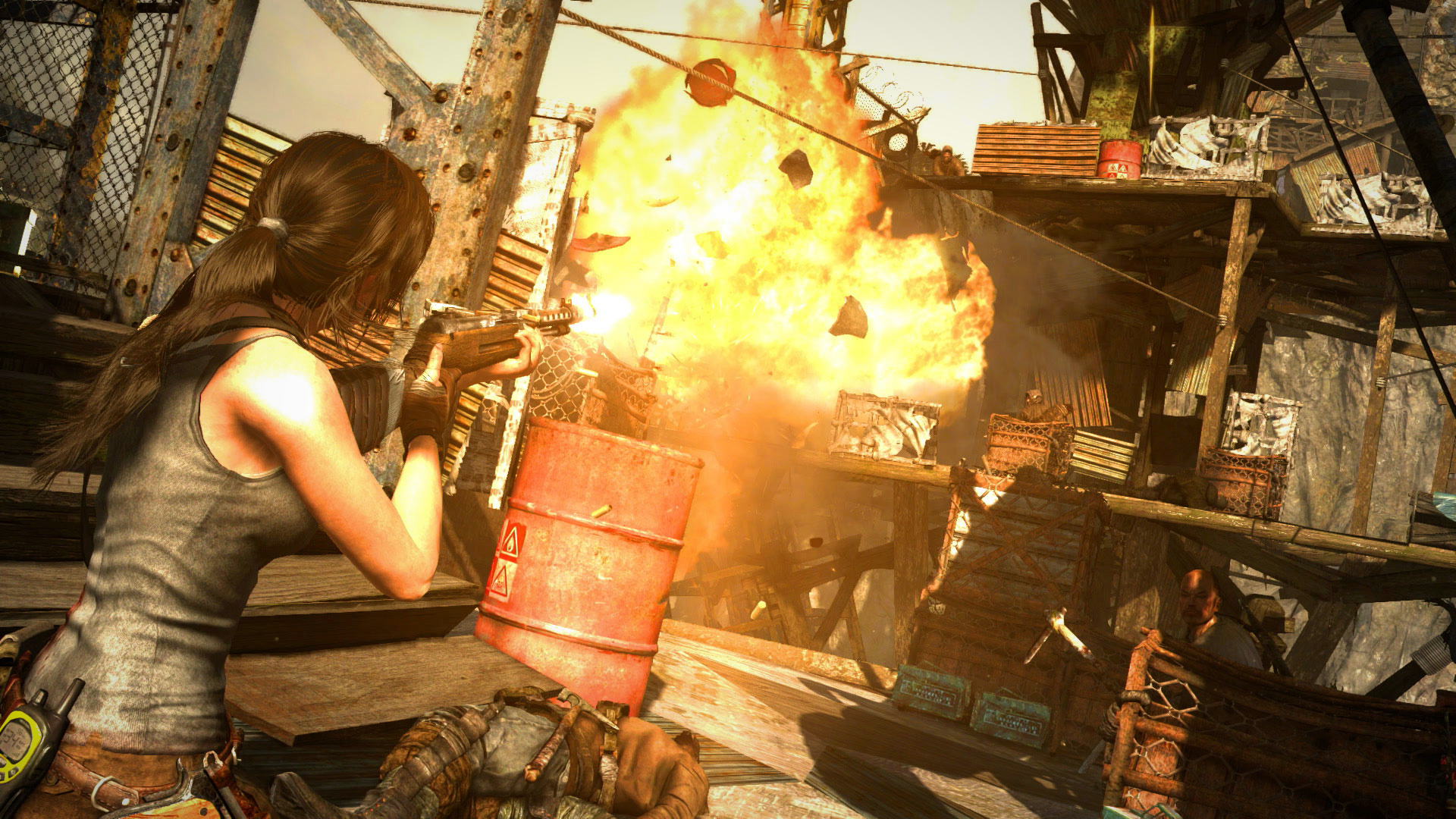 Prior Tomb Rader games featured combat against humans and endangered wildlife, but Tomb Raider (2013) pushed this to the forefront of the experience and everything else felt secondary.

Despite their being far too much combat relative to the simple physics- and fire-based puzzles – especially if you consider the insultingly simple “challenge tombs” – it fit the themes of the game by feeling scrappy and impactful. Lara ducked and scrambled between cover, threw decoys and makeshift explosives, then emerged to gun down or inexpertly-bludgeon hapless survivors. For stealthy players, bow headshots and surprise climbing-axe-to-skull-from-bush moments satisfied (especially as the enemies possessed no peripheral vision and were happily distracted by thrown objects, repeatedly). Unfortunately – and yet another recurrent element of the 2013-2018 trilogy – Tomb Raider (2013) was fond of dropping Lara into combat arenas and throwing waves of enemies at the player, creating frustrating difficulty spikes in comparison to the free-form combat encounters that made up 90% of the experience.

Despite my criticism of the man-made environments, I’ll admit the winding cliffside paths, dark forests, WWII bunkers, sprawling shanty towns, and ancient temples all looked incredible, especially when you threw in some atmospheric lighting and weather effects. The “Definitive Edition”, which was released a year later for the 8th generation consoles, upped the resolution, visual effect quality, and framerate further. The writing – though cringe-worthy in a way only video games can be when it comes to desperately conveying themes the audience is apparently too stupid to understand – was backed up by great voice work and animation. In fact, the visceral quality of animations highlighted one of Tomb Raider (2013)’s most bizarre features: an apparent fixation on the many, many, many ways Lara can die. 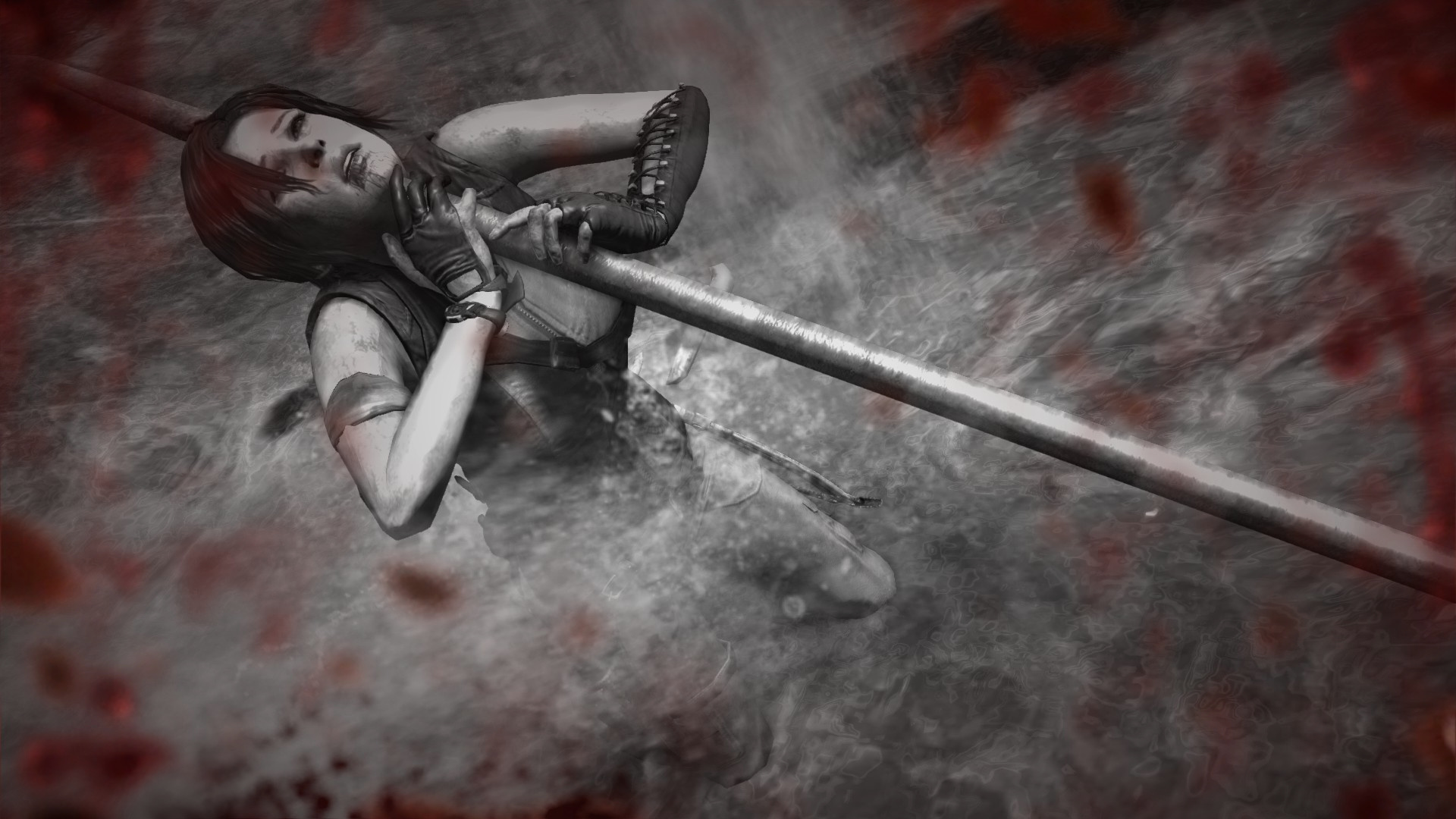 It took less than a minute to find the death animation I remember most on Google.

From the opening moments of the game, during which Lara can be gruesomely crushed by rocks, to the visually chaotic ending sequence that had the player scaling a massive temple in the midst of a storm, with numerous opportunities to plunge to her doom, Tomb Raider (2013) offers a near-endless string of shocking death animations. An early section, permanently etched into my memory, involved steering Lara left and right as she plunged down a turbulent river. Failure would trigger the same graphic scene of Lara impaling herself through the neck on a metal rebar, desperately choking while trying to push herself off. I’m not sure who approved these animations, but they were scaled back in the sequels, typically reserved for unique encounters, and far less gratuitous.

Overall, Tomb Raider (2013) ultimately achieved exactly what Crystal Dynamics needed it to; establish a reimagined Lara, hardened by a series of successive and implausible trials, opening her eyes to the possibility of unexplained mysteries and supernatural elements. It also laid the technical and gameplay foundations for the sequels. It is a game I still recommend you go back and play… it depends on how much time you have on your hands. If you’re short on time, the Tomb Raider (2013): Definitive Edition will give you a feel for the basic framework that defined the trilogy, is narratively self-contained, and often massively-discounted. However, if you’ve got the time to tackle the lengthy sequels, you can safely skip it and rather move onto the two-part battle Lara has with the mysterious organisation called “Trinity”, that leads her to discover what happened to her mother and father in the process.

Tea
@Death - I didnt hate Angel of Darkness as much as the general hate out there... still have fond memories of
exploring in that game

Tea
This is one of those game releases I have to force my self to not replay annually! (guilty of that with the uncharted series...) and as Teb mentions - definitely a favorite in the TR series.

Lurch
@Deathgigas - possibly the vast gap in time between now and the last time I played it! For what it's worth, it was the first Tomb Raider to have a soundtrack composed by a real orchestra and the title theme is amazing,

DEATHGIGAS
No Andrew, Angel of Darkness really was a giant pile. It's just your Stockholm Syndrome talking.

Tebulot
First one was definitely my favorite. While the game swung wildly between teenage Lara and Apex predator Lara, there was enough emotion and vulnerability to the character to keep things going. Subsequent sequels tried to hard to keep her naive/vulnerable/relateable(?).