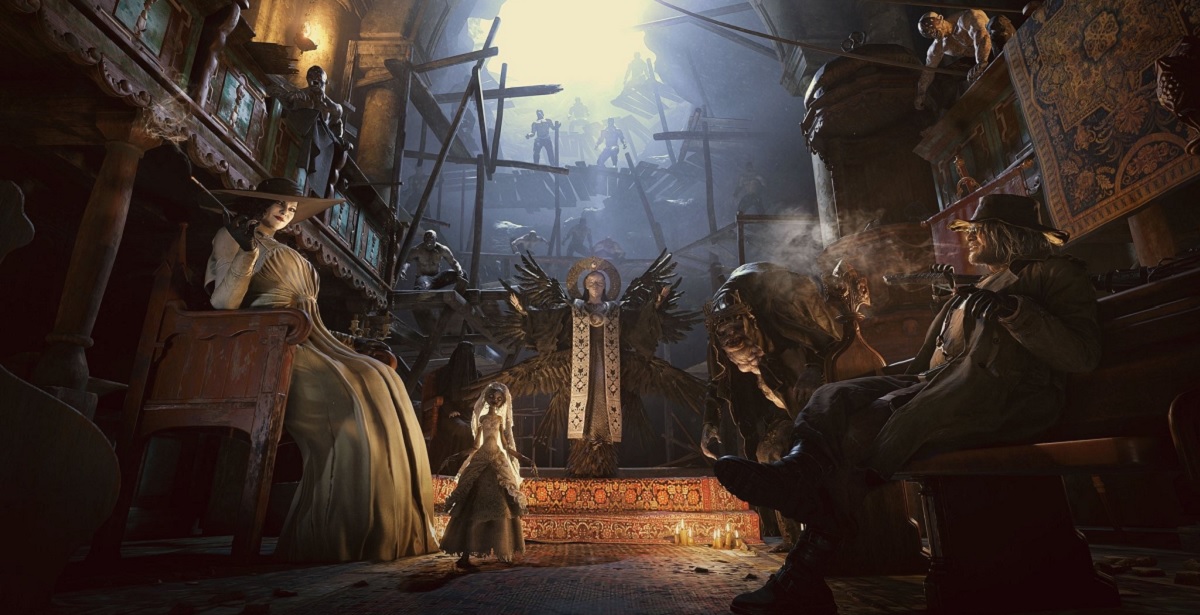 WARNING: Massive spoilers incoming. Turn away if you don't want to be spoiled of the game's main boss battles.

Resident Evil Village is a game containing many boss encounters in the form of Mother Miranda's Four Lords, comprising of Alcina Dimitrescu, Donna Beneviento, Salvatore Moreau, and Karl Heisenberg - in addition to Mother Miranda herself, who serves as the final encounter of the game. They pose the greatest challenges of the experience, and some are quite tricky to figure out if you aren't well-prepared. Luckily, we have just the guide for you to defeating all of the main bosses in Resident Evil Village. 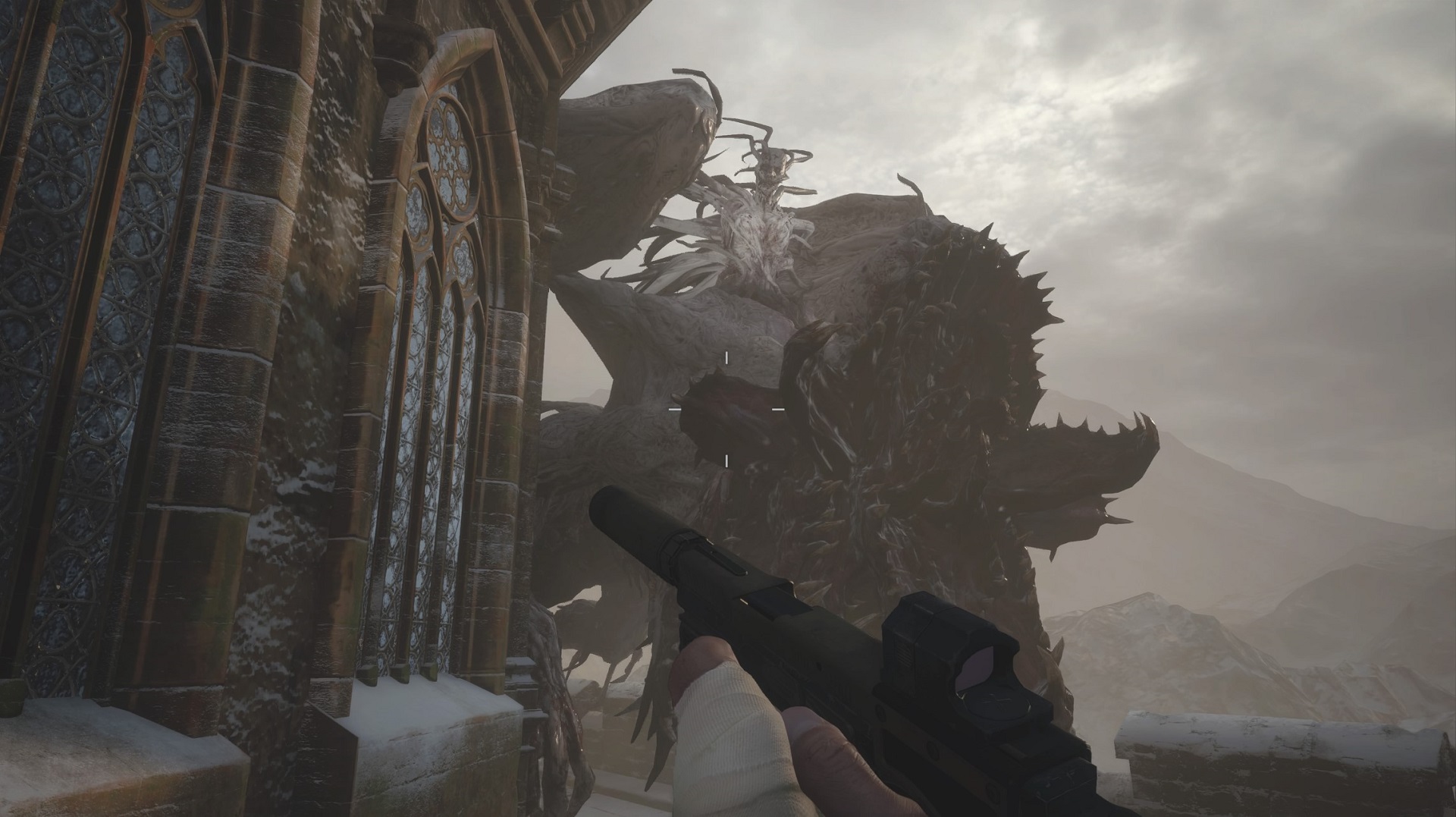 Lady Alcina Dimitrescu is the mistress of the massive Castle Dimitrescu, and is your first real encounter with a Lord in Resident Evil Village. She's present as a pursuer-type for most of your time in the castle, but once you deal with her crazy daughters, you're forced to confront her more "authentic" monstrous form, which takes the shape of a large dragon-like creature.

There's a few phases to this fight that takes place on a tower. Understanding her attack patterns is crucial, first and foremost. She often lunges at Ethan, forcing her to land on the rather large platforms. She'll frequently smash down the walls to create bigger spaces. You have more space to move around, but she also has more space to attack you. She can also send out a flurry of insects to slowly chip away at your health, but they're relatively easy to just run away from.

The focus of all your attacks should go into her body - not the dragon body, but her protruding torso and head from above the dragon. This is where she'll take the greatest amount of damage with well-timed sniper or handgun shots (the sniper for when she's flying). Enough ammo should be scattered around the environment should you need. Once you stun her, she'll rest on the platform. If you got your shotgun, you'll be able to deal a significant amount of damage to her torso/head area, which is fully exposed. The platforms become smaller as you progress up the tower, but as long as you remain aware of your space and aim for her weak areas, you'll take her out in no time. 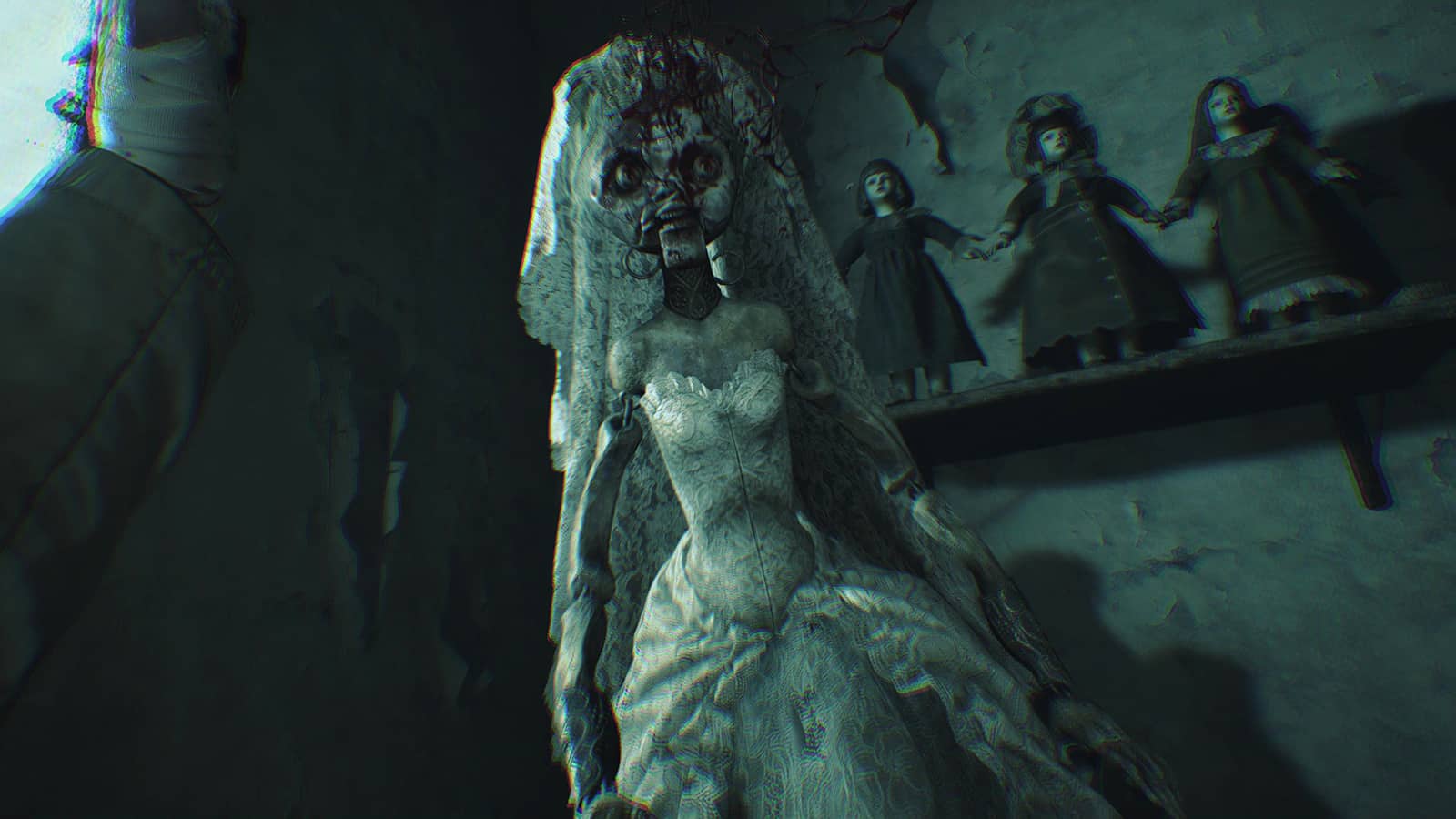 This is certainly one of the most unique boss fights in the entire Resident Evil series. Instead of dealing with Donna Beneviento directly, you have to play a game of hide-and-seek with her possessed doll, Angie. You only have a set amount of time to find Angie amidst a sea of possessed dolls, but her path is rather easy to read and her unique design will make her easier to spot.

Once you begin the game, immediately head upstairs to the bedroom. She'll be sitting right next to the bed. Once you grab her, she'll disappear again. This time, head back downstairs to the main room where you started. Angie will either be hiding in the wall next to the door, or on the far left side of the room. She'll disappear one last time. This last phase is almost random, as she'll appear anywhere in the house. At this stage, you should have enough time to properly scope her out. Stabbing her will kill Donna Beneviento in turn. It's not a particularly tough "boss fight", but it will test your patience if you aren't very good at hide-and-seek. 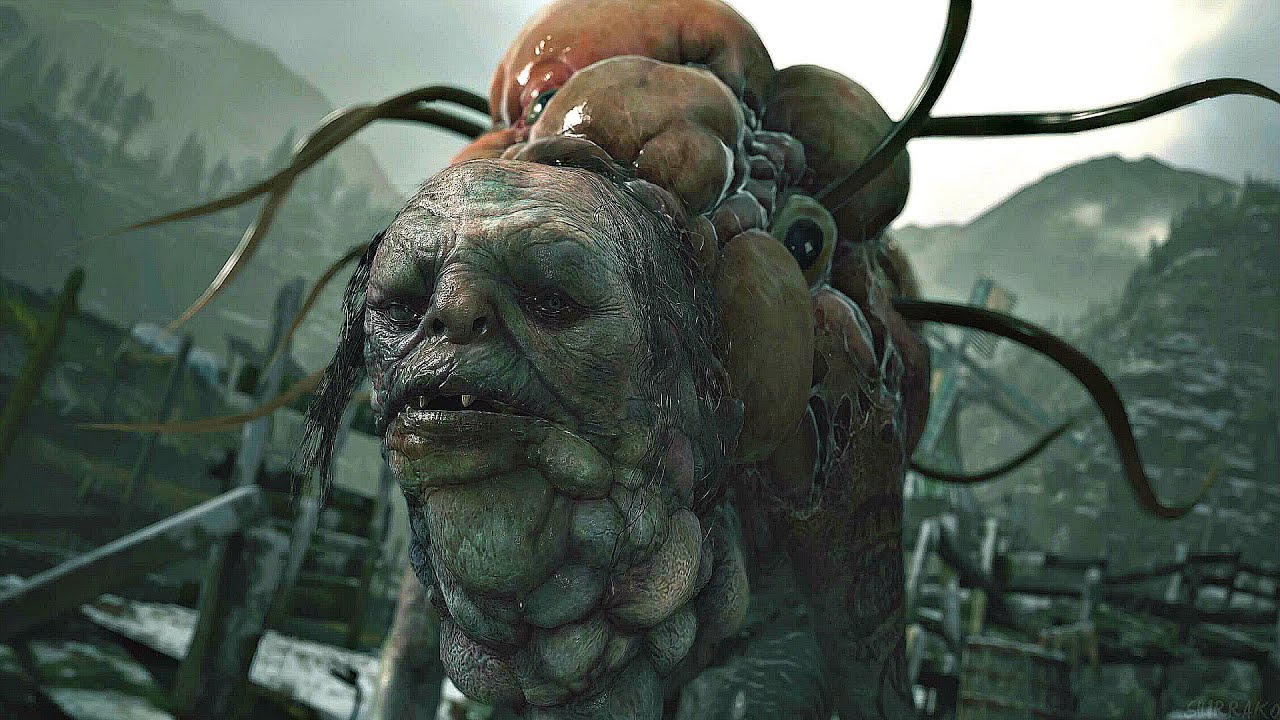 Salvatore Moreau's encounter falls more in line with previous Resident Evil games. After a platforming section avoiding his large whale-monster form, you're thrown into the fishing village's maze. Here, Moreau will attempt to pursue you relentlessly. However, the environment is your biggest ally. There are plenty of explosive barrels littered around, so you simply need to lead the monster to those areas and ignite the explosions with one shot. Doing this enough times will cause him to stagger, leaving his weak area, his body in the monster's mouth, fully exposed. Your shotgun and explosive rounds will deal the greatest amount of damage here.

You need to constantly be on the move in this fight. His large body mass can very quickly catch up to you and deal plenty of melee damage, but there's another more dangerous attack to avoid. If Moreau retreats to one of the building's rooftops, find shelter immediately. He will spew acidic rain over the whole fishing village that will quickly deteriorate Ethan's health, leading to death.

Thankfully, there's enough ammo around the area to keep you well-equipped. As long as you're constantly on the move finding exploding barrels and ammo, you'll have enough firepower to kill him in a few cycles. Just remember to avoid getting too close, keep your distance, and exploit his weak area in his mouth as much as possible. 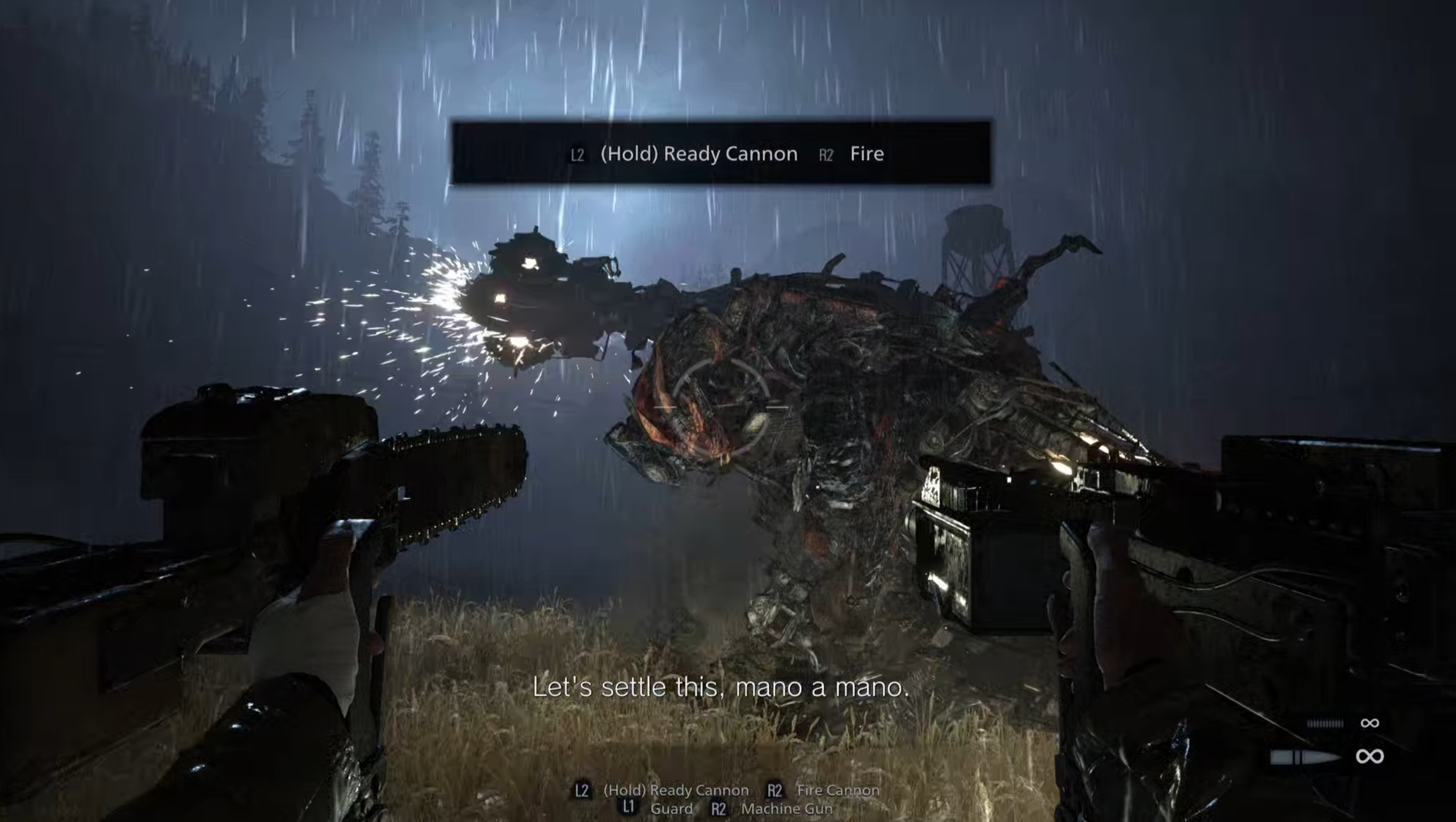 Karl Heisenberg is the last Lord to take out - and boy, is this one insane fight. Before the fight begins, you'll run into Chris Redfield who will give you a mech-tank (yes, you read that correctly) equipped with a giant chainsaw and gattling gun for arms. Your opponent's form? A large, hellish bio-mechanical nightmare that looks like Resident Evil's take on Transformers.

Your chainsaw arm can be used to block most of his oncoming attacks where he quickly charges at you. The gattling gun is your primary weapon in this fight. Like Moreau, try and keep your distance and let the bullets fly - you have infinite ammo. You can also hold down L2/LT to fire a charged shot, which is critical to beating Heisenberg. It deals the greatest amount of damage, and requires about three or four successful shots to initiate the next phase.

Once Heisenberg whips you up in a tornado, you'll fall out of your mech-tank and have to complete the fight on foot. Seems a bit unfair? Luckily, you can use the terrain as shields if you hide behind shattered crates. His weak spots are highlighted by red lights on his body. If you have a sniper rifle, it will make the fight a lot easier by keeping your distance. You can also run up to him when he's briefly stunned to dish out explosive rounds or shotgun blasts. The fight will end when he whips up his tornado again, but this time, Ethan puts on his action-hero pants and uses the floating mech-tank to fire off the last charged shot, killing him instantly. 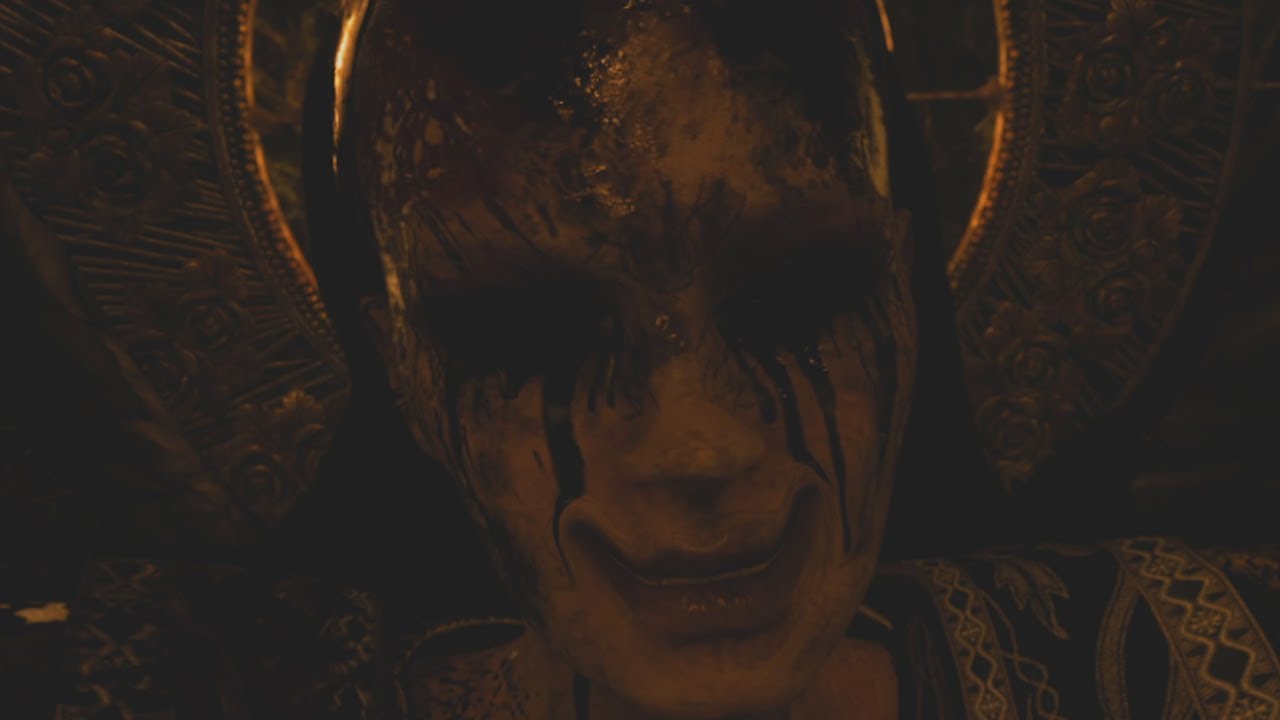 The difficulty of this last fight against Mother Miranda will largely depend on if you managed to reserve enough ammo from your previous time playing as Ethan (as this is where the game broke away to a segment of you playing as Chris). Before the fight begins, go all-out at The Duke. Spend as much Lei on ammo, weapons, and healing items, and craft a lot of ammo too before you enter the arena. If you still have magnum bullets saved from Wolfsbane, it'll be a big help.

Mother Miranda has three forms she can take throughout the fight. The arena you fight her in is quite small, so it's essential to always be on the move. Her first form is her regular humanoid-ish body, her second form is a giant spider, and her third form has her flying in the air.

For her first form, feel free to dish out as much damage as possible. She frequently charges at Ethan, and has a telegraphed AoE attack that can easily be blocked by hiding behind one of her tentacle walls she throws up. If she destroys the tentacle walls, some ammo will drop. In her second spider form, she's a lot faster and takes up more space in the arena. She'll frequently jump and try to land on Ethan, but this is avoidable if you weave or zig-zag away. Her third form is a little trickier, as she's further away in the air, making your shotgun kind of useless. Instead, you'll want to shoot the three balls she forms around her. If these glow and charge at you, they can almost instantly kill you. Shoot them before they're charged to avoid death.

Her ultimate attacks involves her taking to the air and charging up a much larger ball that will annihilate the entire arena with nowhere to hide. You'll need to pump this "spirit bomb" attack with as much bullets to destroy it, causing her to fall back down to the ground stunned. Her attacks, while devastatingly powerful, are fairly easily to telegraph if you pay attention to the wind-ups.

That's it for the main bosses in Resident Evil Village! Which one was your favourite?