Remember When: Videogames Understood The Joy Of Exploration 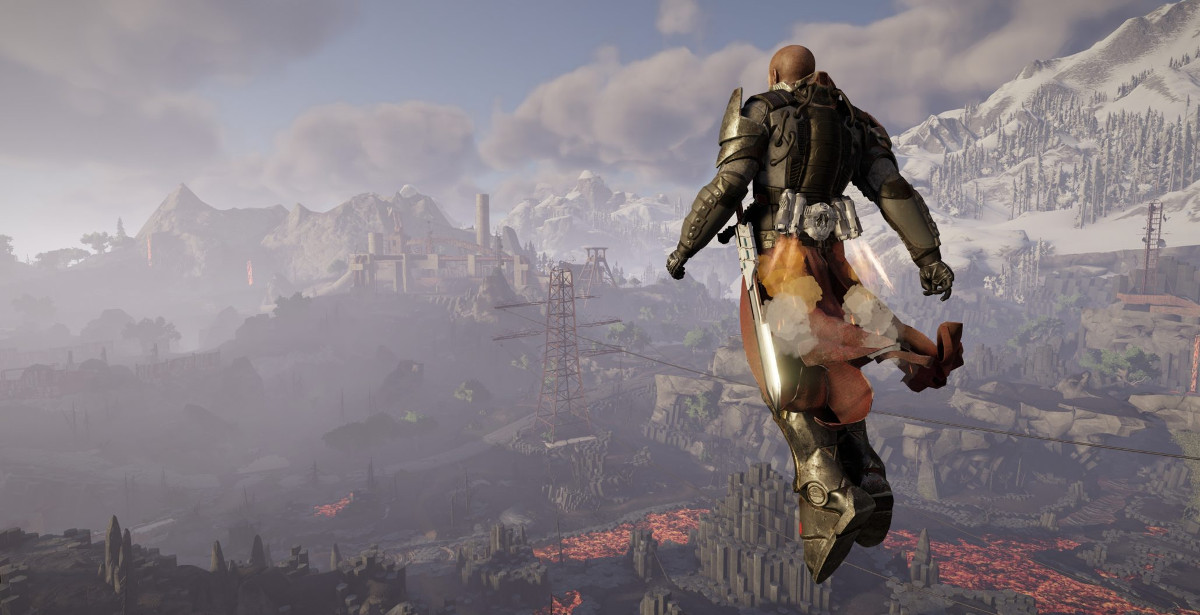 Why would you go explore a distant hillside, a glistening expanse of beach, or a shaded forest path? Because you’ve been given a checklist and a map indicating exactly where you’ll find something of interest? Would you keep going if you knew that by the third stop you’d sampled every activity available?

A huge number of AAA games from the big publishers this year feature open worlds. Massive environments in which it is logistically impossible to code enough diverse activities to meaningfully fill that space. With most games featuring only a few core activities - if you guessed some form of killing, you’ve got a 99% chance of being right - best demonstrated during core missions or quests that have received the most development time. These mechanics are simply repeated ad nauseam for side activities, often with little to no context and simplistic structure (think: kill X many of Y). This repetitive design is annoying enough as is, but developers still go one step further to undermine the experience.

Analogy time – Imagine you’re a photographer exploring a forest full of interesting bird species. At the end of the day, you’re going to spend the entire day engaged in the same activity – photography. Others may have come before you to document these species but you set out knowing there’ll be paths others may not have tread. When and where you’ll intersect a bird gives you the potential to capture a unique interaction never documented before. Your own skill in framing shots and knowledge of photography techniques gives you the opportunity to create a one-of-a-kind image.

Now imagine this scenario but instead you’ve been given a map showing the exact paths to travel and the location of every potential, unchanging encounter with the birdlife (because they’re in cages?). This is the exact same map that has been given to every other photographer that has entered this forest before you. You’ve also been given a camera locked to fixed settings. Now you’re simply following a predefined path with predictable outcomes; any sense of exploration, anticipation and wonder is gone. In addition, the repetitive nature of your activity is more apparent, as too many variables are fixed. 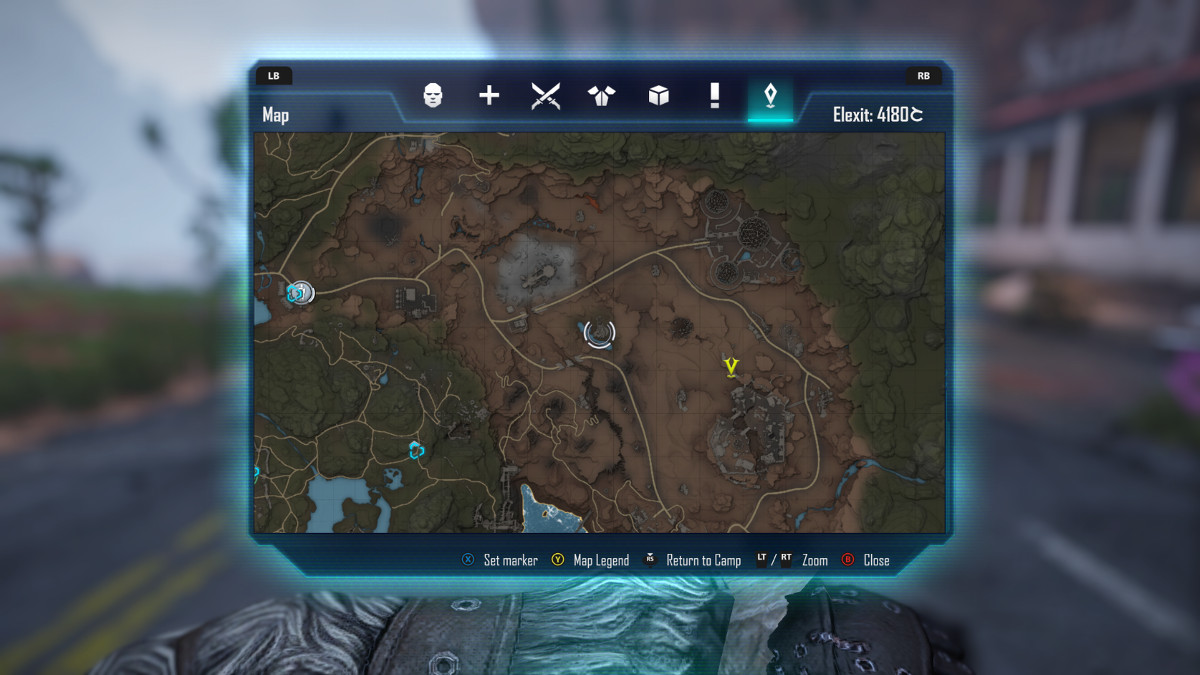 The map in Elex, the game that inspired this piece. I can see my character, my destination and a few fast-travel markers. What lies between me and my destination? Probably just dozens of lootable ruins and deadly mutants but maybe there’ll also be a new settlement, some quest-givers, or traders with legendary gear. Not knowing makes the trip more exciting.

Unfortunately, this is the approach most developers have taken with modern open world games. I appreciate it is impossible to code the complexity you’d expect in a real life adventure (and this is an argument for another time) but surely you can make intelligent choices on how you present your limited range of activities? Developers create a geographically and visually diverse space but rather than allow players to explore it with a sense of mystery and curiosity, they clutter maps with hundreds of guiding icons. It simply highlights the weaknesses and limitations of player interactivity.

There’s no way you can wander off the beaten path anymore as every square inch of the map is crammed with highlighted activities. If developers are so hell-bent on guiding players to content and want everyone to have exactly the same experience, why not just mark out fewer well-structured activities that show off the best the game has to offer, rather than simple repetitive activities that only dull the impact of the mechanics in the core missions?

Note: Yes, I realise many games let you strip away map markers but this should be the damn default setting. Some games don't even give you that choice! 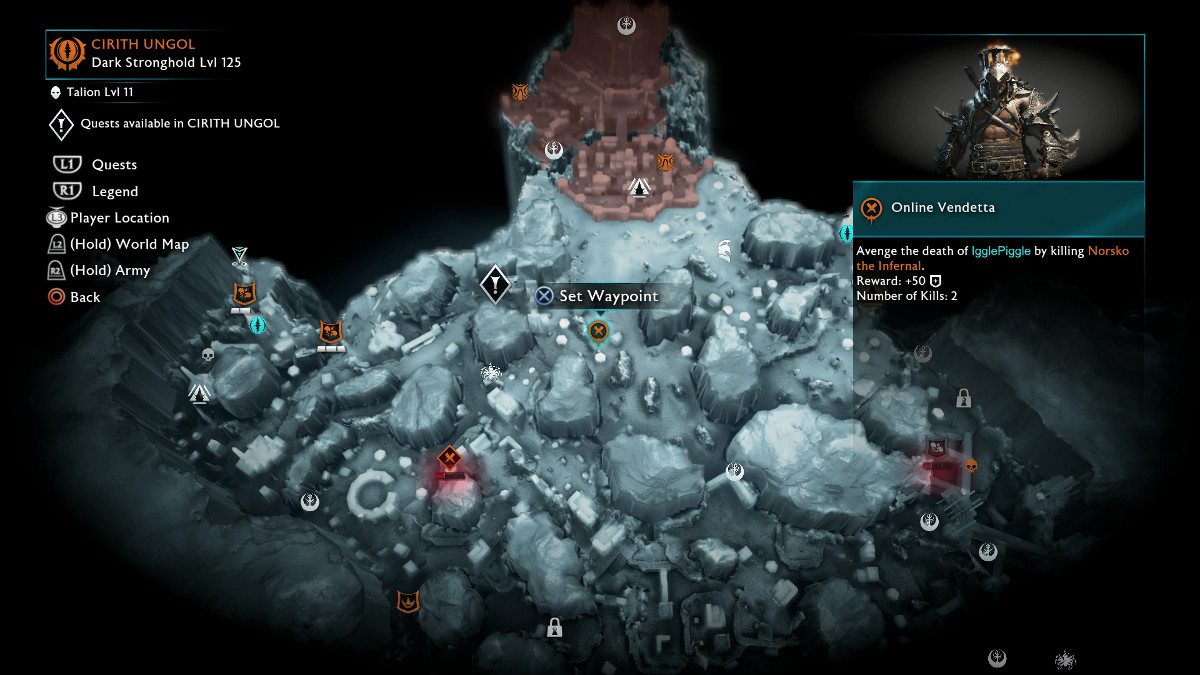 The map for Middle-earth: Shadow of War. I wonder what I’ll encounter on the way to the fortress of Cirith Ungol? A half dozen lost artifacts, several ithildin, two war chief events and one vendetta missions. Not much of an unexpected journey.

If I’m traversing a huge map on the way to their next core mission, stumbling across something unmarked is a source of joy; the sensation of discovering something unexpected and possibly unique. Sure, with several million people playing most of the major releases that’s not going to hold true for long but, for a short time, it feels that way.

This sense of individual discovery and the urge to share it is one of the reasons that older videogames, going back to early JRPGs on the NES, have the most incredible wiki-pages, supported by dozens of contributors who have tried to document every encounter and oddity they found in the game world, often looking for meaning in details far beyond what the developers even considered themselves. Developers and publishers never shut up about the need for shared or social experiences in their games and yet they’ve successfully stunted one of the most enjoyable resources in the gaming community.

Given how few people finish the games they purchase (or see even a fraction of the content on offer - another topic worth covering), why not reward those that invest more time in your game with undocumented secrets and activities that they can feel a sense of reward in finding, while still ensuring those who have limited time experience your core missions without the constant reminder there’s dozens or hundreds of trivial tasks baying for their attention en route? As an added bonus, you even get to mask your own content limitations.

Blaze
Great article. My fondest memories of exploring were FFXV, Skyrim, and The Witcher 3. Not many open world games can captivate me quite like those. They were special in their own rights, even though FFXV was arguably the least densely populated, there was still a charm about it that brought me back to exploring it.

Scottie
Just Cause and GTA always had awesome easter eggs hidden in their worlds. The exact place on the map though always available on internet 1-2 weeks after game release though.

Lurch
@HybridPanda - I've been mulling over a Switch for ages now and Breath of the Wild would be a system seller for me.

@TempestXtreme - Bethesda do a great job with the open world games and this piece had me considering a Skyrim Special Edition and Fallout 4 replay this holiday break. My one issue though, the repeatable quests in SKyrim and Fallout 4 that will repopulate and drag you back to previous locations. Wish there was a way to disable that.

SerialHappiness
Just one thing to say, The Legend of Zelda: Breath of the Wild.

TempestXtreme
FFXV allows for exploring of a very big world, but most of the exploring is done in monster and resource hunting. Skyrim had amazing exploring, all those dungeons and caves and tombs. I miss games with lots of exploring and big world maps.

vortex6671
Great piece, Andrew.
The last game (in recent memory) that I truly went out of my way to explore everything was The Witcher 3. Even games like Shadow of War, Horizon : Zero Dawn and AC;Origins can't hold my attention long enough to encourage proper exploration.