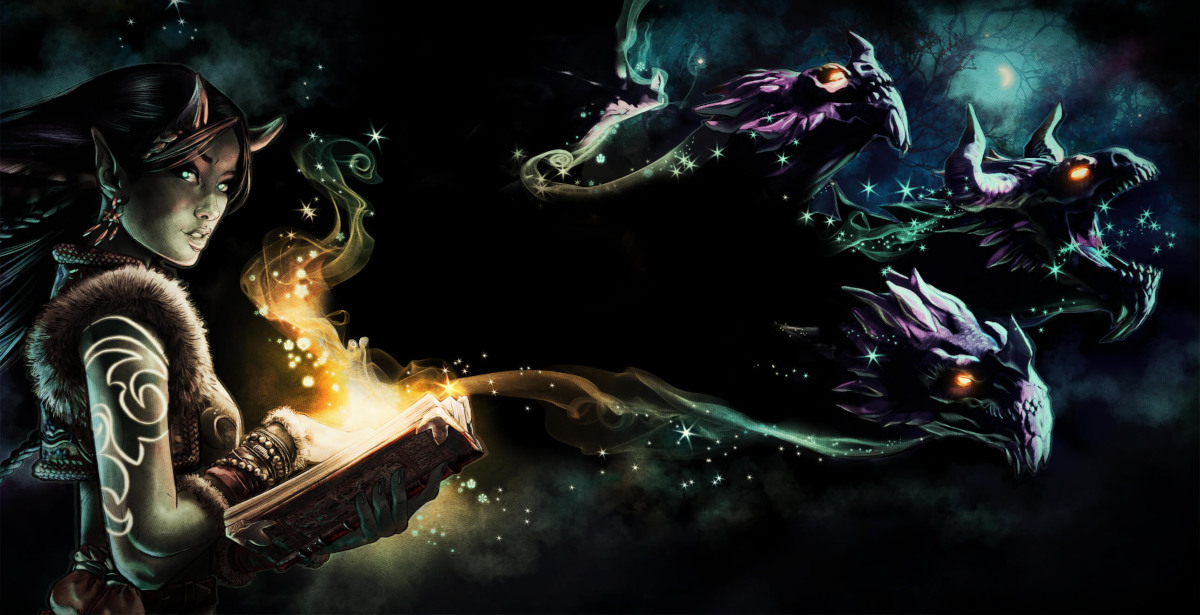 If I hadn’t been randomly assigned to review a few licensed pinball tables, I’d probably have no idea who Zen Studios are. I also subsequently assumed that pinball was all the small Hungarian developer did. As such, I was more than a little surprised to discover they’ve spent the last two years on a passion project of their own – an excellent dungeon-crawler, Operencia: The Stolen Sun.

From the get-go, it’s clear Zen Studios were heavily inspired by the classics, such as Might & Magic and The Bard’s Tale, but also by more modern games in the genre, such as Legend of Grimrock and Vaporum. Your lightly-customisable adventurer, either male or female and fully-voiced, is guided to an ancient castle after a prophetic dream, swiftly discovering and befriending several companions, all of whom are directly (or indirectly) working to save the captured Sun King, Napkirály, and save the "Middle World" from invasion by a dragon of "The Underworld". 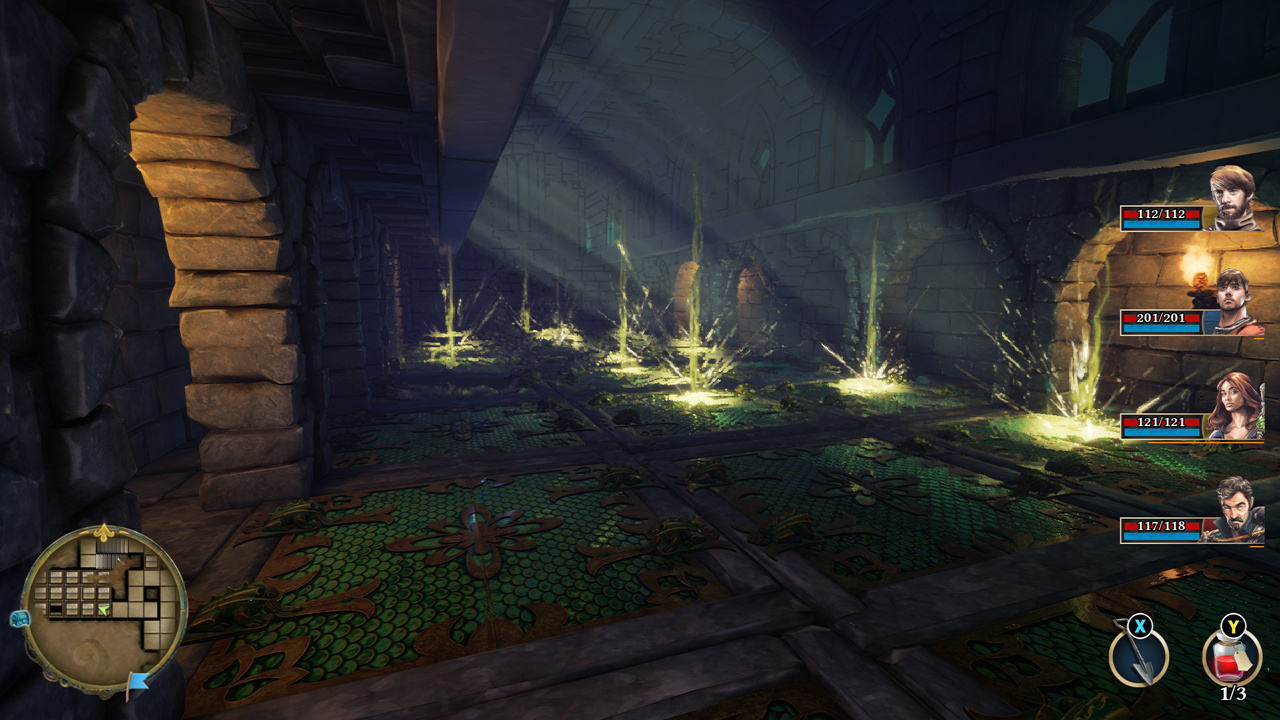 Operencia: The Stolen Sun is at its best when it most closely emulates the classic dungeon-crawlers that inspired it.

The plot is full of common fairy tale tropes and quirky companions you’ve seen before in many incarnations, however, it’s well-told by way of mission cutscenes, entertaining party banter, and snarky journal entries by your companion Jóska. Although many locations you explore are under the influence of curses - often as a result of dark or tragic circumstances - your protagonist and companions are consistently upbeat and, I’m loathe to use the word, delightful. I remember, at most, two or three conversations in which characters chastised one another for their actions but, not long after, everyone was back to being friends, shouting words of encouragement and sharing bad jokes. Just don’t consider that a criticism - I’m thoroughly sick of the grimdark tone that permeates most other major releases and found Operencia: The Stolen Sun a refreshing change.

As recent dungeon-crawler games have all been indie titles with limited reach, I’d not be surprised if many modern gamers have never experienced the genre.

As in the classic games, you’ll traverse grid-based environments from a first-person perspective, hunting for keys, solving puzzles, and defeating monsters in turn-based battles to progress. As recent dungeon-crawler games have all been indie titles with limited reach, I’d not be surprised if many modern gamers have never experienced the genre. You stomp around block by block – something that frequently ties into puzzles – able to freely swivel your view to change direction and hunt for nearby items (though you can snap your view around in 90° intervals like the classics), all the while avoiding or engaging enemies that patrol the world. 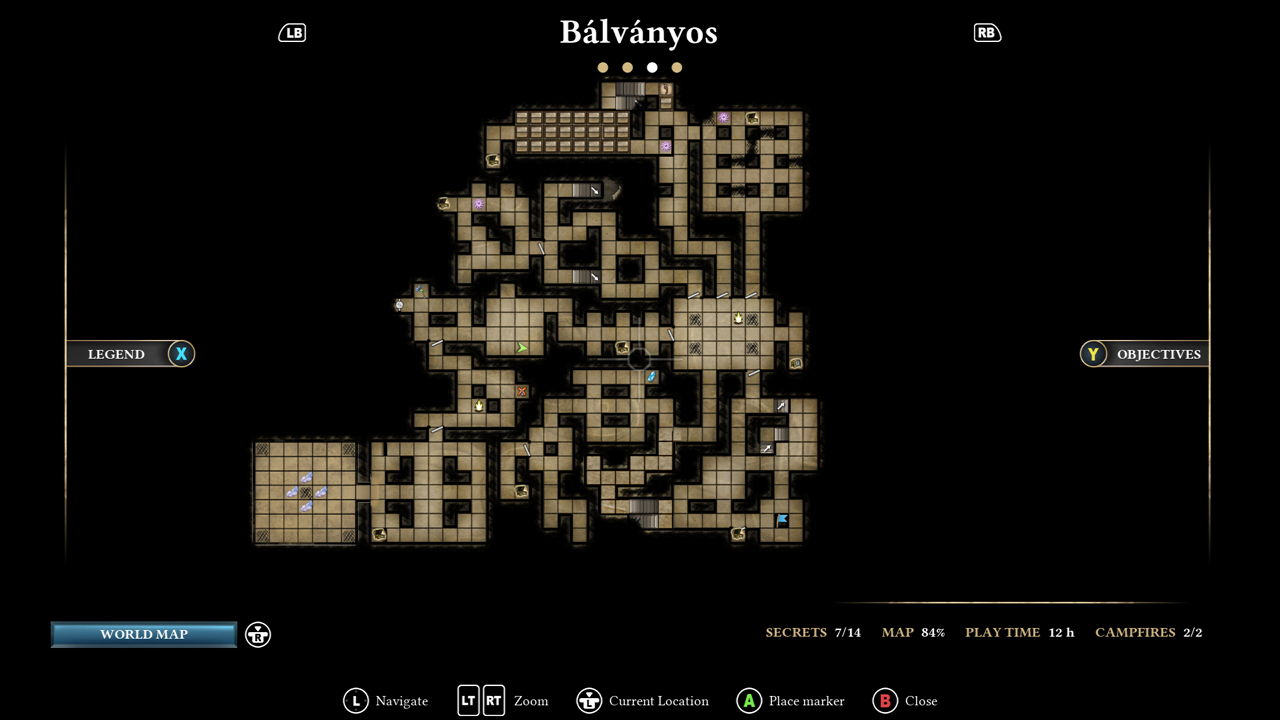 The world exists as an elaborate grid, with puzzle rooms interconnected by numerous paths and plenty of secrets to find along the way.

This genre has always focused small, yet densely packed and interconnected environments; full of secret switches, hidden paths, and powerful gear to find. Each area is small enough that backtracking is not tedious - at least once you’ve cleared out any remaining foes – but they’re designed to be examined in fine detail, as you hunt for clues, secrets, or just the way forward. Operencia: The Stolen Sun is never as dense as its peers and makes several concessions – such as highlighting small once you get close enough and relying on far fewer switches hidden in wall textures. However, but it still makes great use of its limited real estate, object-manipulating artefacts you'll unlock as you progress, and a myriad of puzzles that are usually simpler than you think. Before tackling the final dungeon, I was horrified to discover I had explored more than 97% of the early maps, yet had unlocked only a third of their secrets.

Operencia: The Stolen Sun is never as dense as its peers and makes several concessions – such as highlighting small objects once you get close enough and relying on far fewer switches hidden in wall textures.

Key items that allow you to progress are also integral to unlocking secrets in prior areas, which expand your inventory with new and powerful weapons, armour, and trinkets; an activity well worth your while as Operencia: The Stolen Sun has an uneven difficulty curve. Going hand-in-hand with the gear system are several basic stats to boost with each level, and three skill-trees per character (with at least one unique to that companion). You level up at a brisk rate, though the jump in difficulty every time you enter a new area make these stat boosts, new skills, and new gear feel less impactful than I’d have hoped. 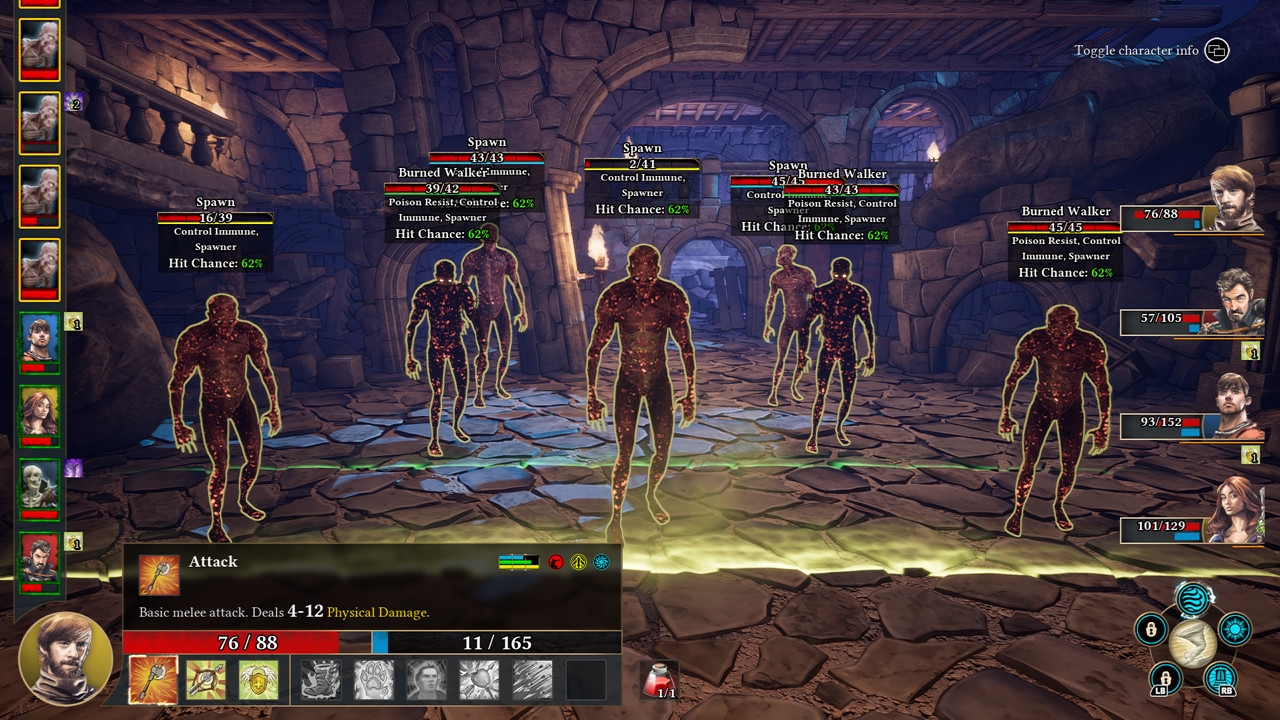 I was struggling against large mobs when I first entered the Deva Fortress. Online forums suggested I target the "spawners" first. Spot the problem...

Combat in Operencia: The Stolen Sun is turn-based, circumventing the controller issues that real-time dungeon-crawlers present (though that means you’ll not get to experience the grid-based combat box-dance that is far more awesome than it sounds). There are several factors to consider: enemy row position - near, middle, or far - which affects basic and special skill damage, the initiative stat which dictates the turn order, physical and magical resistances, managing your energy bar (which limits special skill use), and numerous buffs and debuffs. It can be slow going at first but, after a few levels, you’ll be able to mix and match companions and their special skills to create an effective team.

All that said, I never once found myself in a position I could tear through enemies with ease. With no respawning foes and the bulk of experience doled out by completing quests, finding secrets, and crafting potions (itself a fun riddle-based challenge), I only just managed to keep ahead of the curve - and that was without several optional difficulty modifiers engaged. Rather than the high-risk, high-damage dynamic of many turn-based games, battles take much longer in Operencia: The Stolen Sun, often resulting in back-and-forth battles of attrition, rather than quick and divisive skirmishes that punish bad decision. 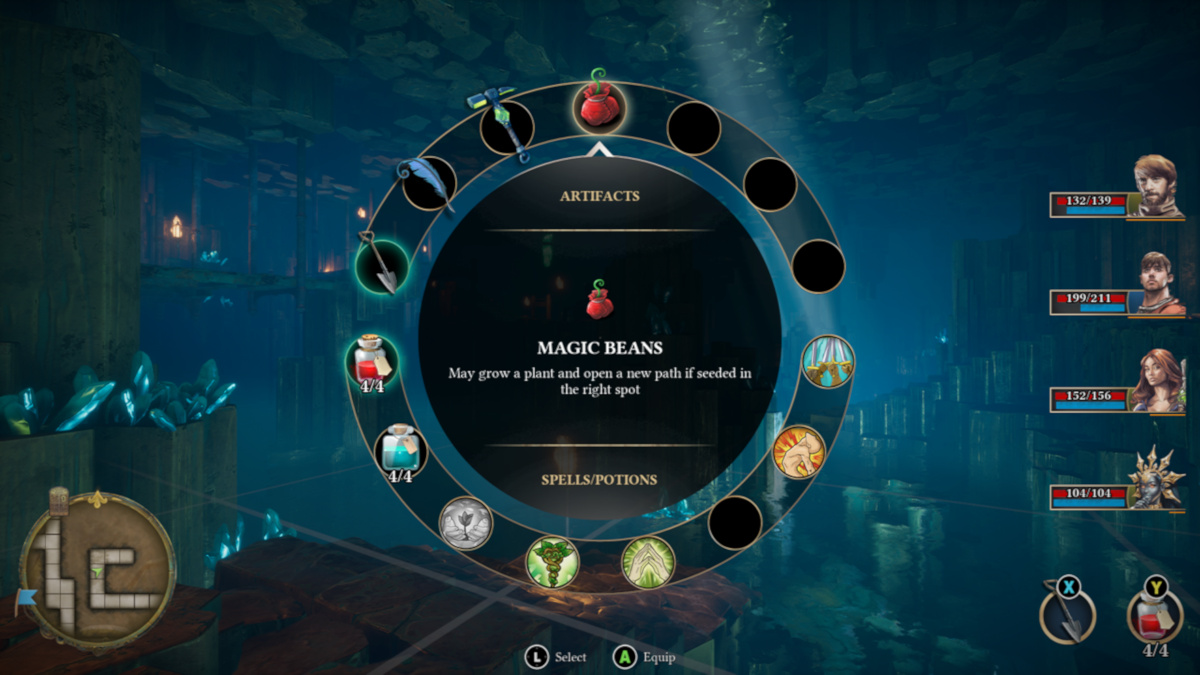 You'll unlock a myriad of magical artifacts that you'll use to solve puzzles to progress - but they also allow you to return to prior areas and hunt down more secrets.

However, that's not always the case thanks to some odd design choices. For example, you can ambush an enemy by walking into them from behind but, after your initial turn, enemies effectively take two turns in a row, plenty of time to mercilessly gank your spell casters before you can react. The row-based enemy positioning is not a feature afforded to your own party, so there's no way to place your fighters on the front lines and glass cannons behind. As a consequence, I found it all but vital to keep the knight with his taunt ability in my party. Thankfully, I rarely lost much progress after falling in battle as the game autosaves frequently and there are numerous campfires that allow you to manually save and rest up your party. Operencia: The Stolen Sun is tough but it’s rarely punishing, always giving you the ability to backtrack and reconfigure your party composition or their gear.

Given the amount of time you’ll spend staring at walls, ceilings, and floors, Operencia: The Stolen Sun boasts excellent stylised visuals on both the Xbox One and PC. It almost looks cell-shaded in places, relying on vibrant, garish colours and interesting designs, rather than high-resolution textures and complex geometry. The visuals are complimented by ambient audio and one of my favourite video game soundtracks that uses a myriad of string instruments to great effect and defines the atmosphere of each locations. The voice acting is solid, aside from the old merchant that accompanies you on your quest (serving as a mobile store for offloading old gear and picking up a few unique items). Interior locations are the highlight – like the flooded castle you first visit, the crystalline caves in the Copper Forest, and the Glass Palace – but even the less detailed outdoor environments still look suitably fantastical. Unfortunately, the framerate can tank in places on the base Xbox One, but this rarely affects gameplay. 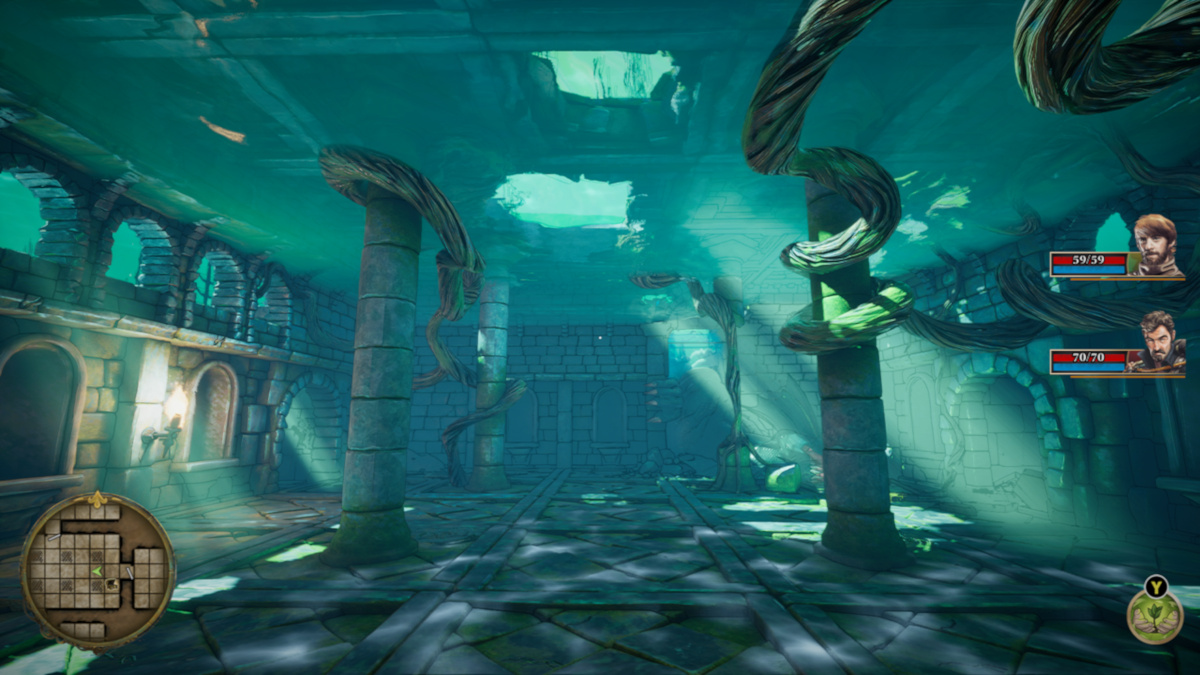 From the outset to the final dungeon, the visuals never ceased to impress.

It's taken me the better part of three weeks and 25 hours to complete Operencia: The Stolen Sun, making it a substantial adventure and one that I enjoyed every minute of - especially once I stopped being lazy and spent more time refining my characters gear choices rather than using the "optimise" function! Operencia: The Stolen Sun offers console players and opportunity to experience a genre we very rarely see and it's an impressive first attempt by Zen Studios. The environment begs to be explored, puzzles are challenging at first but the clues are always nearby, combat is tough but tactical, and it all looks and sounds great. Minor issues can frustrate in places but not enough to ruin the experience.

You can pick up Operencia on the Epic Games Store, as a "Play Anywhere" title on the Windows 10 or Xbox Store, and it's currently on the Xbox Game Pass.

Tons of puzzles and secrets