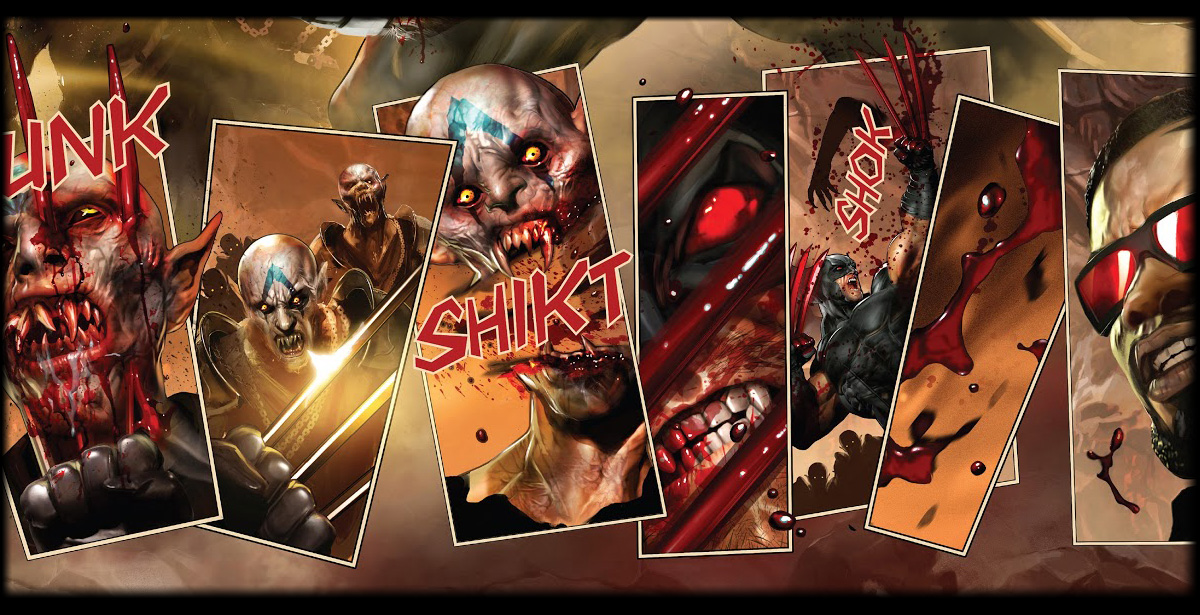 This week in New Comic Book Day we get a blast from the past with Tank Girl, and a recent cross over that actually works, in Wolverine Vs. Blade. 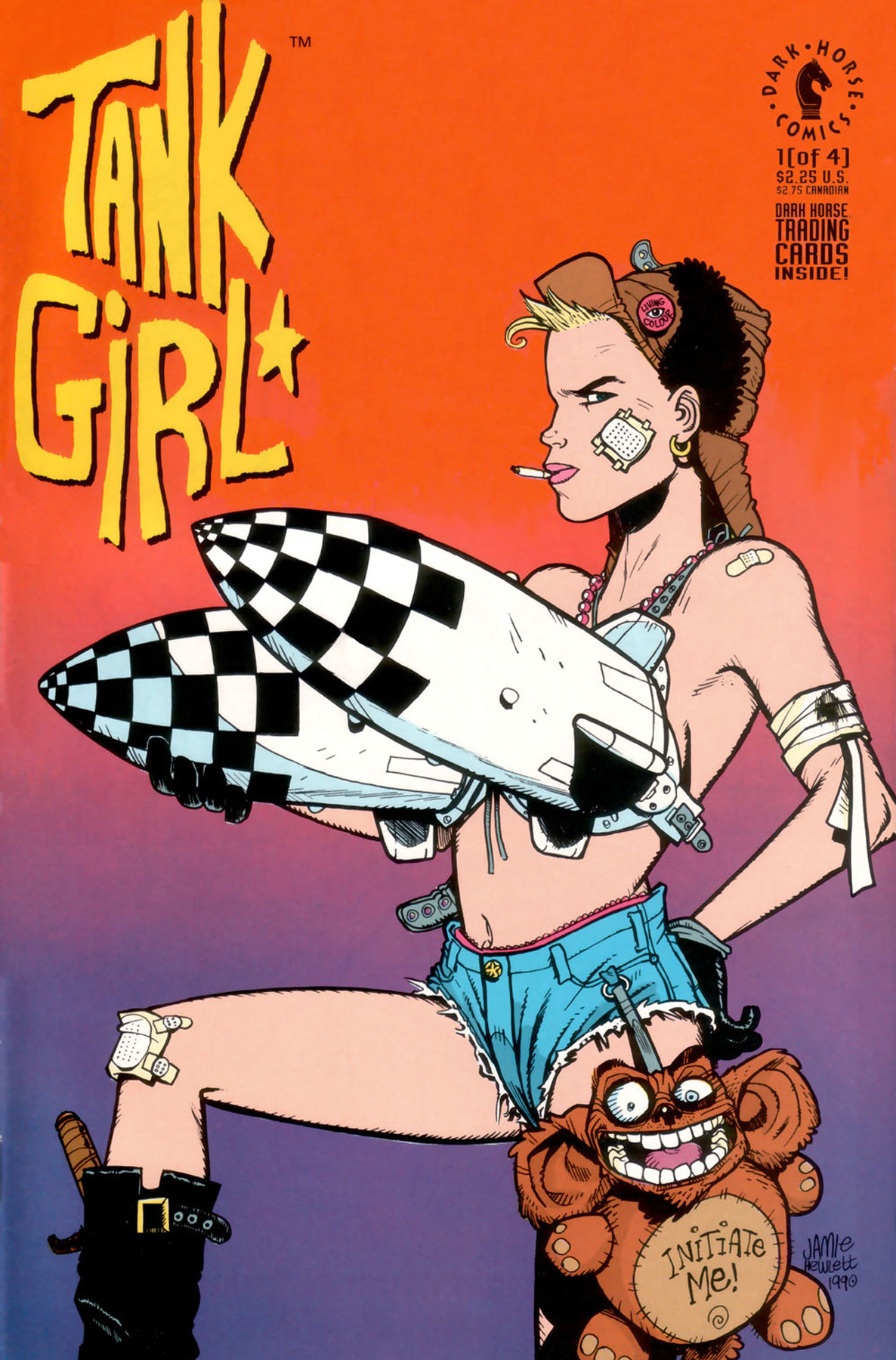 Tank Girl has had numerous writers and artists tackle the character and plots over the years, as well as a brilliant movie (one of the best comic to movie productions I've seen, in my opinion), even though said movie was never very successful and even the creators of the comic didn't think too much of it. But when it first came out, the Tank Girl comic was very disorganized, rough and aggressive, with some very 'in your face' commentary on things like politics, sexism, racism and censorship, but all slapped together in a nasty (but a good kind of nasty) and chaotic ride of sharp wit, over the top violence, flirtatious imagery and naughty jokes.

Jamie Hewlett's artwork is really something to behold in those first few issues. It's like the Michelangelo of brainstorming doodles. There is a remarkable amount of detail in the illustrations, each containing little jokes and laughs themselves, like one would see in the pages of MAD Magazine, while still telling the story in that very brutal and raw style, similar to what we saw in some of the other British comics from around then, like Judge Dredd, or Strontium Dog. It's such a stark contrast to what was being done in American comics, and although not as crisp and clean, it really feels like more honest artwork. The illustrations of a multi-talented artist struggling to unleash the cacophony of ideas and thoughts swirling around inside his head. 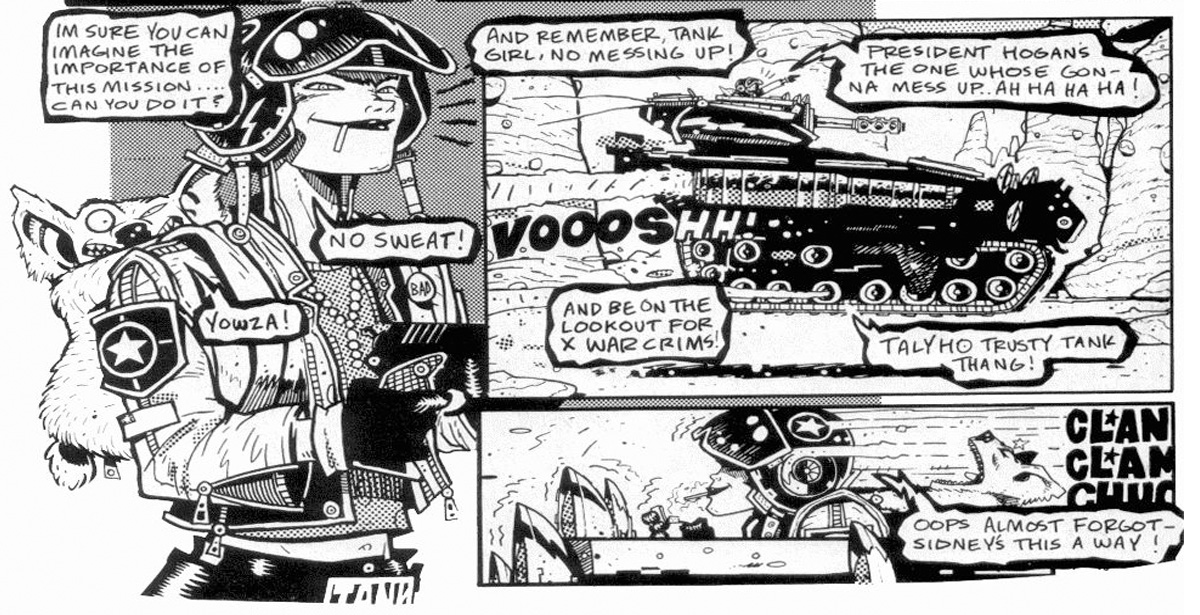 The writing style in the British comics like Tank Girl was also very raw and often rude, as opposed to what many other countries were doing. But that organic and unrefined approach really made Tank Girl spring to life from the pages and capture the imagination and thrill the readers in a way that was more real and easier to identify with than what a lot of bigger publishers or self publishers who were trying to get picked up by bigger publishers, were putting out.

Tank Girl had the attitude of the character and comic reflected in its creators (although not as blatantly, with [censored] flopping out and guns firing all over the place, but they definitely were cut from the same cloth), that they were foul-mouthed hooligans and so bloody what. Anarchy! Punk's not Dead! Kick 'em in the nuts! And the Tank Girl character embodies this whole punk generation, with every comment, in every action. Chaos and mayhem, horny kangaroos and chauvinistic male machismo, poking fun at war and bloodshed and sex and everything else that came to mind. It isn't really a wonder, when reading through the first few pages of Tank Girl taking on a bounty and ending out slaughtering criminals and innocents alike in a very by the way act of well meaning insanity, or having voodoo plastic surgery to try to escape capture, or defeating a time traveller by flashing her [censored] at him, that writer and artist and co-creator of Tank Girl, Jamie Hewlett, later went on to form the band Gorillaz with Damon Albarn from Blur, to continue unleashing his creative lunacy / genius into the music world as he had done to the comics world. 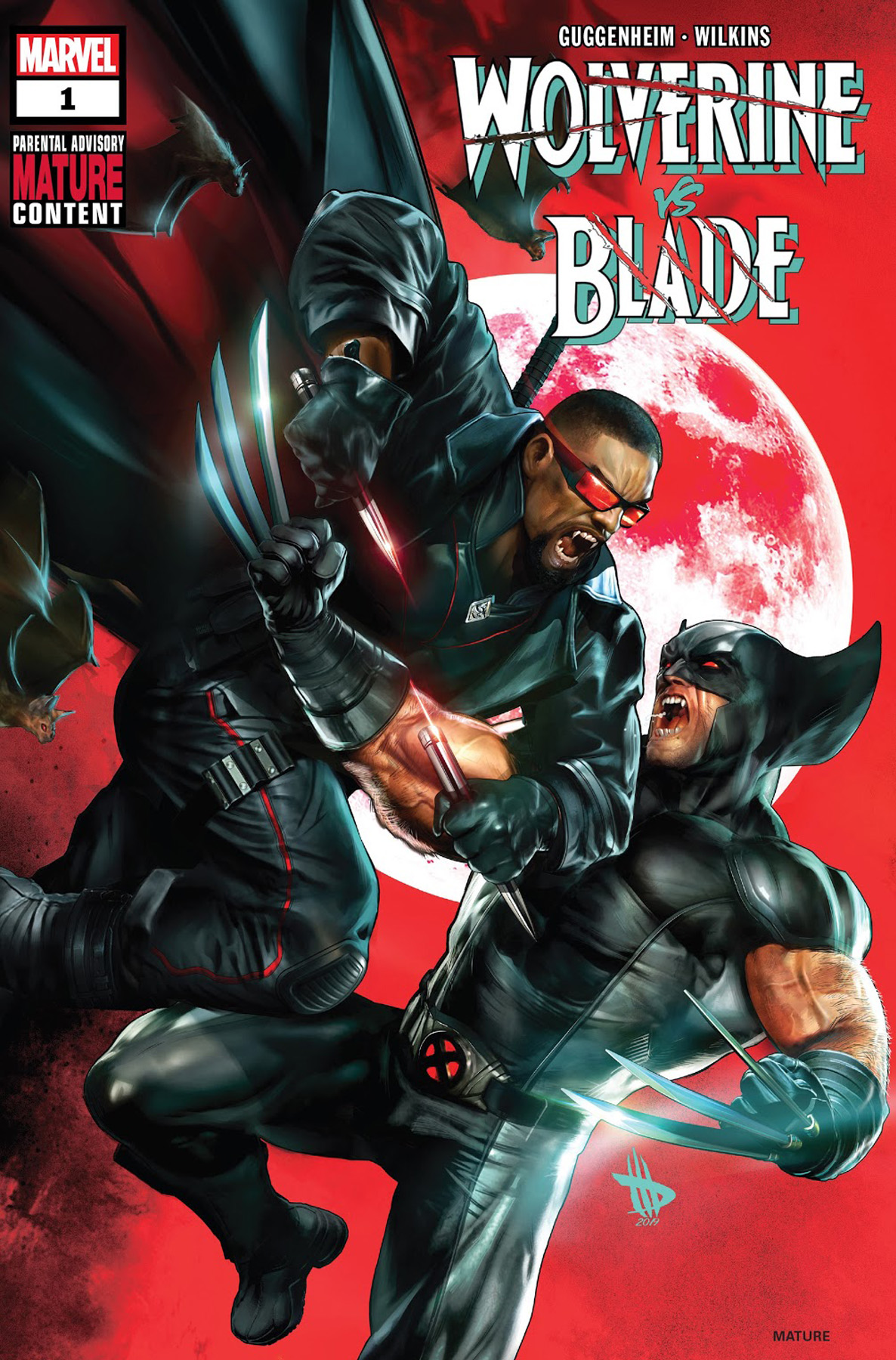 Seeing that there was a Wolverine Vs. Blade comic out got me pretty excited. Seeing the two very bad ass characters having a proper face off would be awesome. But as is the case most of the time in comics when two main hero characters are set to square off against each other, it's either just an outright lie and there is no fight, or it's just a little skirmish before they all work together all buddy-buddy like and live happily ever after. While this comic does lie in the later, they do actually fight but for most of the comic they're on the same side, it is redeemed by the fact that the story is actually quite nicely put together (for a cross over), and when these two titans clash, even though it is pretty brief, it is an incredibly epic set of pages.

The comic sees Blade and Wolverine bumping into each other while they're each on their own mission to take out the same vampire temple filled with crazed vamp cultists. We see some pretty great fight scenes almost immediately as the two characters work together, giving us a bit of a back story of who they are, in case the reader has been living under a rock somewhere, and what they're doing out at the temple. After that clash the heroes go their separate ways, only to discover that this vampire cult has been tuning mutants into vampires, a cause which neither of our heroes like much, in order to set forth and unleash some prophecy foretold mutant vampire messiah. Unfortunately for them, both Blade and Wolverine's independent investigations lead them to believe that the other is actually this vampire messiah and needs to be stopped. Queue the battle between these two skilled and ferocious warriors. 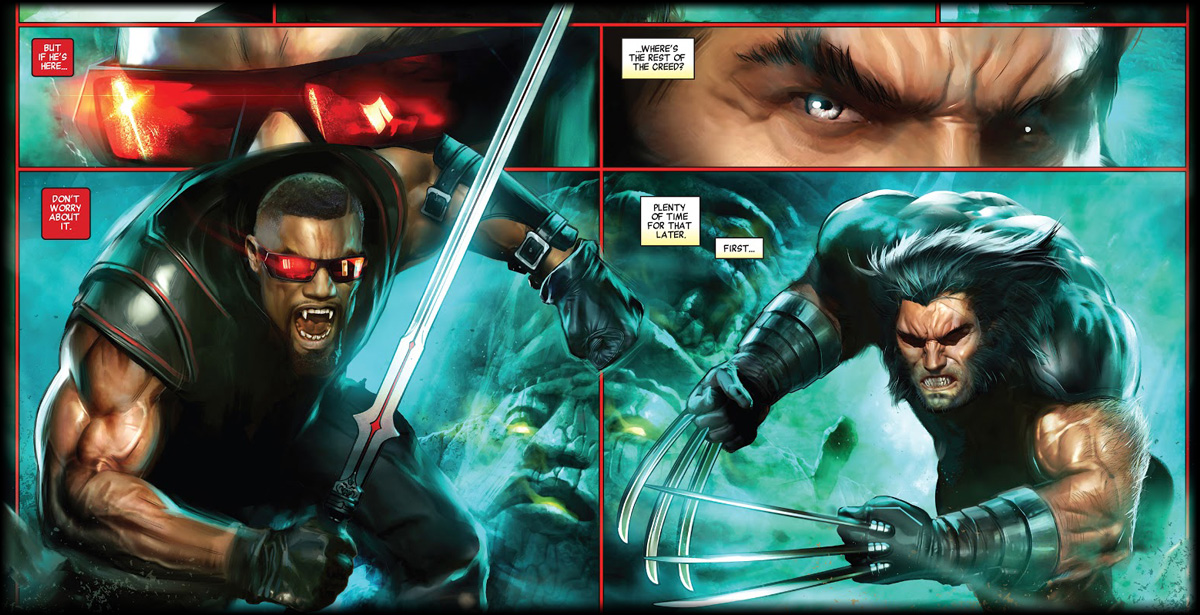 They soon figure out, however, that neither of them are in fact this evil vampire master, and that their actual foe is something far more sinister. Which brings them to another battle of epic proportions, and ultimately, victory for the united forces of good.

Although put like that, the story does sound a little cheesy, and while it does have a few plot twists, it is kind of predictable, but it is still very well written and quite enjoyable. Where the comic really shines however, is in its art. This comic is masterfully presented, with vivid colouring, detailed expression, fast paced action, grizzly battles, and enough of an eerie atmosphere to give it the justified horror spin on the action title.

The amazing look of the book makes it reminiscent of many other Wolverine and X-Force comics which use a similar style of fantastically visual and appealing panels, which truly sells the argument that comics are another form of visual media in the same vein as movies or television productions. All in all, Wolverine Vs. Blade is a really enjoyable comic special, and as a 1-shot issue, while leaving you wanting to see more of that great artwork, doesn't need to get you caught up in an ongoing or long-winded saga to tell its story well.