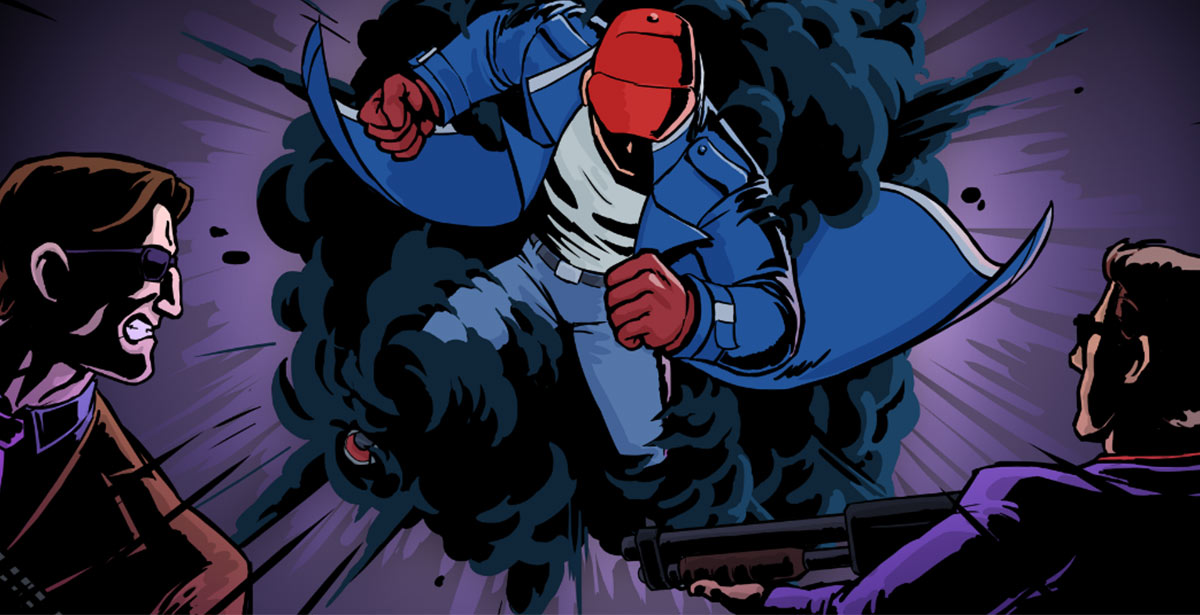 Mr. Shifty often feels like a low-violence, puzzle-oriented, super-powered version of Hotline Miami. At its very best, it captures the stop-start flow of the original Hotline Miami — observe, plan, and then engage in a glorious display of speed, skill, and violence. At its worst, it makes the same mistakes as Hotline Miami 2 — overlong zones, spawning enemies, and too many encounters that’ll leave you thanking luck, rather than celebrating skill.

The game picks up with the titular Mr. Shifty infiltrating an evil corporation’s skyscraper in pursuit of a “mega-plutonium” core that’ll be used for nefarious purposes. With no voice of his own, your smart-talking, (awful) pun-cracking companion Nyx guides you over the radio; providing exposition, tutorial messages, advice, and general banter. The only other character with a voice is Chairman Stone (or should I say written dialogue — there’s no voice acting). He is a caricature of a villain, with numerous angry rants and casual disregard for his minions. The dialogue does a great job of being just dumb enough to remain funny. The nefarious Chairman Stone and hordes of disposable goons.

Narrative is not a huge part the experience, with the last third of the game happy to drag you through numerous levels thanks to contrived events. What starts out as a hunt for the mega-plutonium core becomes a hunt for Stone, who eventually gets his hands on the secret behind your character’s “shifting” powers, and becomes an even greater menace. These events provide sufficient motivation for your character to push through the skyscraper — going up, down, and then up again — towards the final battle against a super-powered Stone. However, after experiencing the confusing, disjointed, yet ultimately enthralling narrative in both Hotline Miami games, Mr. Shifty’s plot feels underwhelming, closer to that of a simple superhero comic.

But what a great superhero game Mr. Shifty would have made with the right licensing — the movement and combat is exactly what you would want in a dedicated Nightcrawler X-Men game. Short bursts of teleportation paired with a flurry of punches that sends goons flying through the air and trashing the environment. Where Hotline Miami demands careful placement and a quick trigger finger, Mr. Shifty is all about mobility. Both games allow you to scope out the rooms ahead, formulate a route, and wreak havoc, but with the lack of permanent ranged combat options, your character is the weapon and this means getting up close while making sure you’re never hit. The bulk of the game is spent taking down mobs but hazardous traps add some variety.

On a perfect run, you would dash through a wall and beat down a gun-wielding enemy before dashing back to cover. As his companions storm the room, you smash the door into the advancing mob before dashing towards the rear to take down one or two more. Then you would grab a wooden stick from shattered furniture and dash back into the room to finish off the mob with a few wide swings that send them hurtling through the air, smashing through glass windows, and crumpling against walls. When a plan comes together, you’ll be impressed with your own skill and it looks spectacular in action.

Of course, there are gameplay concessions that ensure you’re not instantly gunned down when tackling a gun-wielding mob. Enemies telegraph their actions and are reasonably slow to turn, aim, fire and reload — at least in the beginning. You can dash to the back of a group, beat down a goon, then dash to the front and repeat the cycle so long as you don’t deplete your dash “energy”. You can perform five quick dashes in a row before triggering a cool down, or take it slow and steady, allowing a semi-depleted pool of energy to recharge quickly. Managing this ability ties into the puzzle-oriented sections that see you dodging streams of flame or deadly laser beams (and, of course, using them against your foes). Some zones also possess generators that supress your abilities and require more thoughtful planning. You can try lead enemies into melee range, or sneak through the level to destroy the generator before clearing the zone. Building up your combo meter is vital in later levels and the “bullet time” mode saved my hide many times.

While fists are your primary source of damage; tables, doors, boxes, statues, and vending machines all disintegrate under impact, spewing out a variety of objects that can be thrown or used to bludgeon opponents. Throwing objects is the equivalent of ranged combat and essential to surviving later encounters. While you can’t directly use firearms, enemies can gun each other down with reckless abandon and dashing through mobs to draw fire is another essential skill that can trivialise tough encounters.

Regardless of how you dispatch your foes, you slowly build up a combo meter if they fall in quick succession. Once filled, this provides a safety barrier by automatically triggering “bullet time” when a projectile comes close to your character. For a short space of time, the screen goes a shade of blue, enemy movement slows dramatically, and your punches deal extra damage. Although short lived, it often allows you to quickly clear a room of gun-wielding foes or simply dash to relative safety. Unfortunately, fast-moving melee enemies and heat-seeking rockets do not trigger this ability, so you’ll have no safety net in later levels. Unless you’re supremely skilled, you can expect to die a lot. Especially to turrets with heat-seeking rockets that move faster than you can run and make tight turns in narrow spaces.

With the constant spray of bullets, tough melee enemies, deadly lasers, trip mines, exploding barrels, and infuriating heat-seeking turrets, you’ll die a lot. Thankfully, the game resets you to the beginning of the zone in an instant, allowing you to get back into the action quickly and encouraging a fast, aggressive approach to many zones. Unfortunately, later levels present an issue for two reasons, both of which also plagued Hotline Miami 2.

Firstly, each zone becomes larger as the game progresses, often with a ridiculous number of enemies and traps, with every mistake costing you a considerable amount of playtime. This shifts your approach from aggressive to cautious, disrupting the pace of the game. Secondly, for plot-specific reasons, enemies begin spawning into zones, removing the ability to observe and plan. While this will keep you on your toes, later zones feel chaotic and random chance feels more important than skill. The second half of the game introduces spawning enemies that, while keeping you on your toes, removes the ability to observe, plan and execute stylish assaults. Instead, it becomes a matter of perseverance as you kite enemies around the levelling, whittling down their numbers.

While Mr. Shifty lacks the psychedelic visual style, extreme violence, and amazing licensed soundtrack of Hotline Miami, the clear visuals and destructible environments are a perfect fit for the gameplay. Even in the most chaotic battles, you will always be able to distinguish your character, enemies, and projectiles. As you fight through the level, bullets, explosions, and the impact of airborne enemies will shatter glass, splinter objects, and crumble walls, leaving the environment littered with fallen foes and debris. Few games have left me so satisfied with the aftermath of prolonged and stressful battle. I just wish the music was more varied and memorable.

There have been far too few Hotline Miami-style games since the original launched to critical acclaim in 2012, and Mr. Shifty does a fantastic job of providing a familiar experience but with its own unique and empowering gameplay mechanic. The final hour or two can be frustratingly hard thanks to some dubious design choices, but overall, Mr. Shifty should provide hours of fun and prove the perfect game for impressive speed runs and displays of skill. An easy game to recommend to fans of the genre.

Drawn out near the end