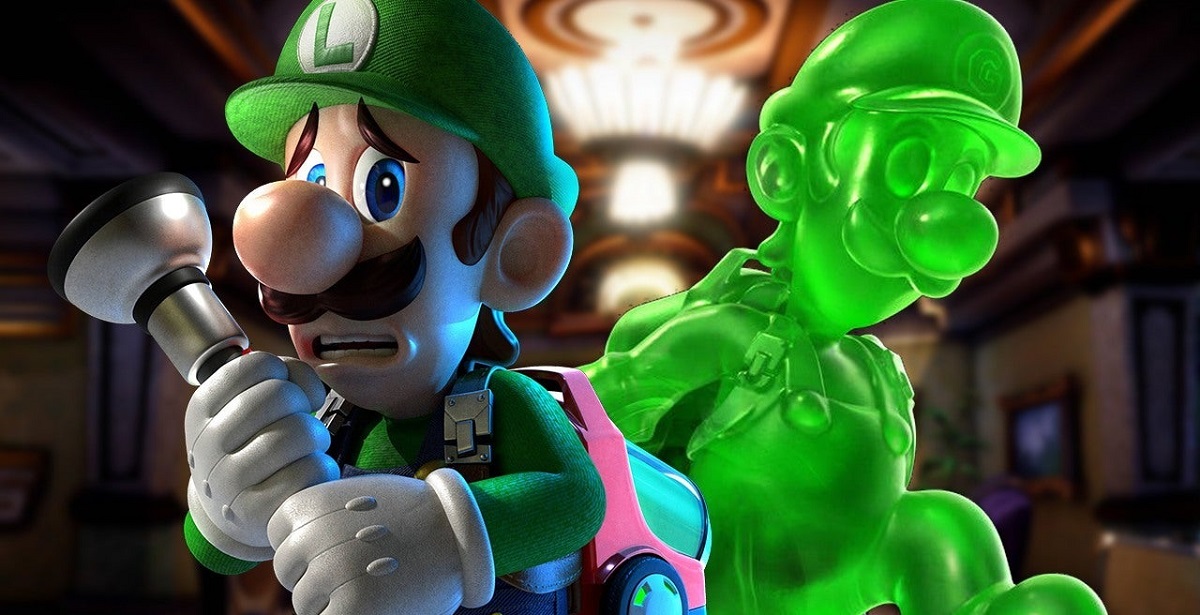 Luigi’s Mansion 3 is almost upon us. In fact, it’s arriving just in time for Halloween. The better of the two jumping brothers is up for his third game in the series and it looks like Luigi’s Mansion 3 is just proof that it keeps getting better with every sequel. I had the luxury of getting hands-on with the game at Comic Con Africa, thanks to Nintendo having a playable demo available at their booth. 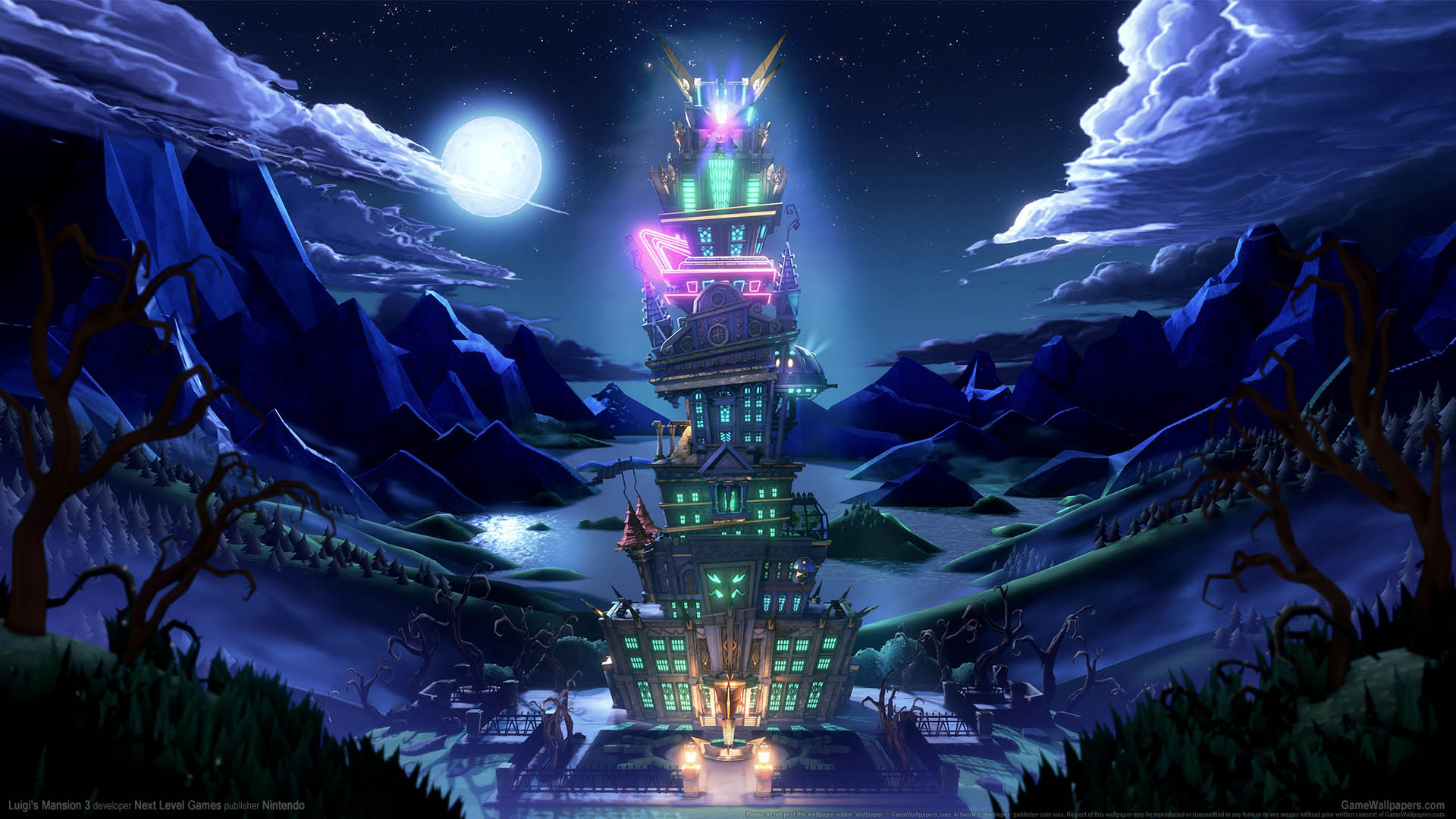 Luigi returns for the third time, being deposited into yet another haunted region with nothing more than his trusty flashlight and poltergeist-sucking vacuum cleaner. In the demo, I got to explore a castle-like area that had a myriad of dungeons to work your way around. The game’s demo starts off by using an innocent ghost dog to teach you how to use the vacuum cleaner and flashlight to be the scourge of supernatural beings everywhere. The dog doesn’t die (that put my conscious at ease), so you can sit there and practise your moves until you’re comfortable with the game. I mean, if you’re a horrible human being who likes to beat up harmless ghost dogs.

Immediately after that, the demo wasted no time in taking you into the action. You’re met with a nefarious spirit that chuckles as it came in to lay the final blow. Sadly, it was met with a brief flash of light and the sound of a vacuum humming. You’re then prompted to smash the “A” button which slams the ghosts on the floor until they eventually can’t fight back anymore. Fans of the previous games will be very familiar with this gameplay and will probably have very little trouble with the enemies. Thankfully, the demo threw various enemy types my way.

The enemies themselves feel like mini-puzzles that one has to solve.

Ghosts with shields required Luigi to shoot a plunger at them, in order to suck the shield off of their arms with the vacuum. This adds a very nice touch to how the combat gameplay worked. It isn’t as simple as just pressing the flashlight when you have the shield spirits mixed in with the normal enemy types. The enemies themselves feel like mini-puzzles that one has to solve. However, it isn’t too intense that the gameplay is hindered. Rather, it elevates the gameplay, making encounters feel a lot more pleasant. 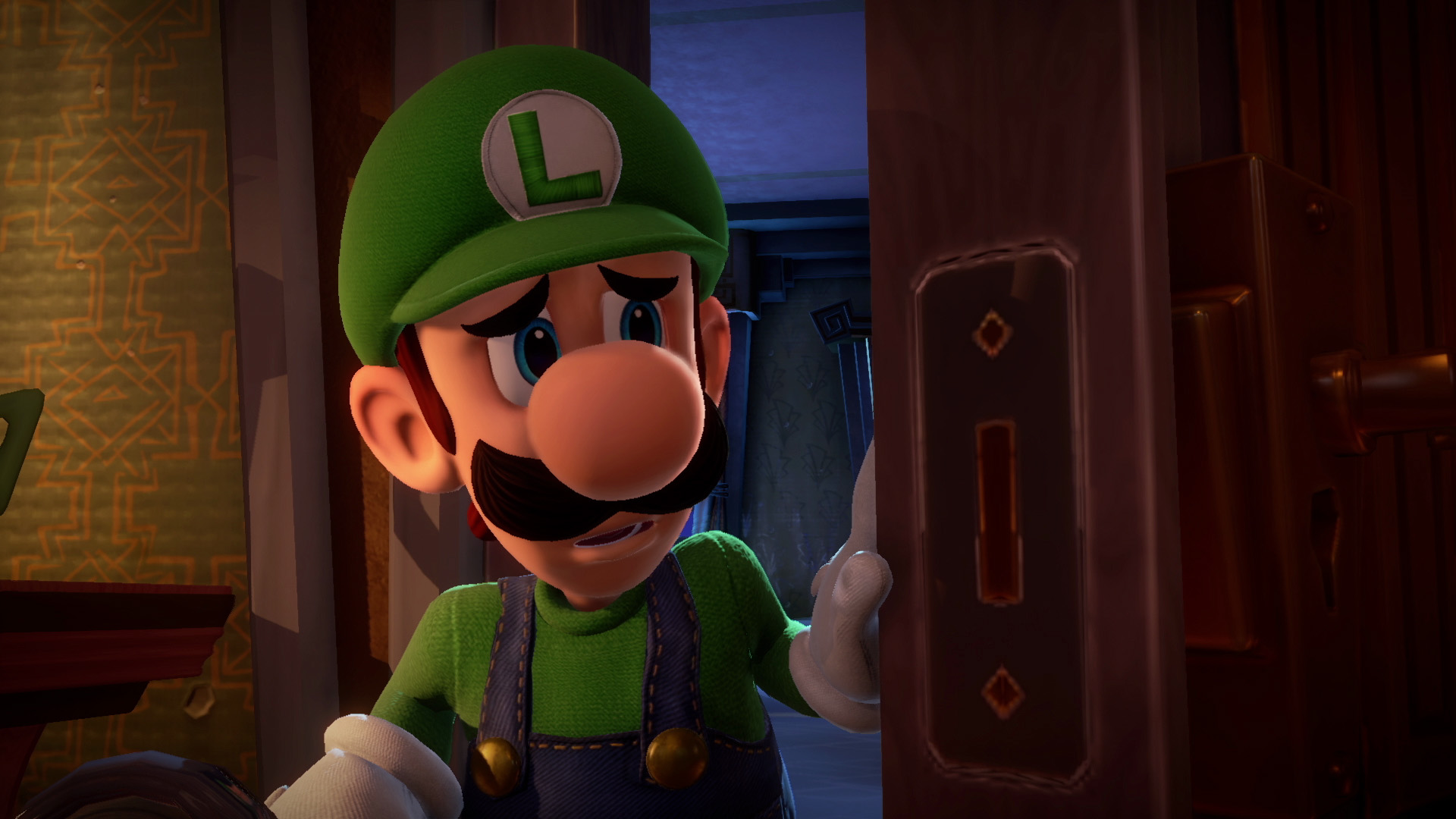 After you’re done fighting off any ghosts, Luigi is left with the actual puzzles that you have to solve. The puzzles are very fun and intuitive, especially with the addition of Gooigi. Gooigi is basically a second Luigi (made out of slime) that can walk through areas that would otherwise kill our ghostbusting plumber. Your ectoplasm partner will help you navigate your way through puzzles as well as open up secret areas throughout the map. I wasn’t able to find all the secret areas in my limited time, but the Nintendo representative gladly gave me a walkthrough of all the undiscovered parts of the dungeon. Not only did I feel inadequate for missing that many secret areas, but I felt like the game immediately had a replayability factor to it. I wanted to go back and explore the hidden areas even more, but sadly, other people also needed to have a turn at the game.

This may have only been a demo, but it felt very polished. The map design looked impeccable with the spooky atmosphere contrasting heavily with Luigi’s whimpers. It doesn’t make the game feel scary, instead, offering a charismatic way of portraying the supernatural world. At the end of the castle map, I had to fight a deceased, orange king, who clearly had more pride than brains (and may have cheated a little in his time alive). The boss arena was pretty par for the course, with there being enough room to study what I had to do in order to defeat what lay before me.

I wouldn’t say that the game is immensely difficult, but it’s definitely not easy.

If you’re not paying attention, things can be very challenging. There really isn’t much of a tutorial, unless you’re taking too long. If that happens, the aforementioned dog with appear and give you a quick hint. This didn’t help too much against the boss I was fighting, as my timing was horribly off. I wouldn’t say that the game is immensely difficult, but it’s definitely not easy. For example, the king would charge at you, and you would have to time your flashlight perfectly. All of this was happening while his minions shot arrows at me from doors that could open up at any time. 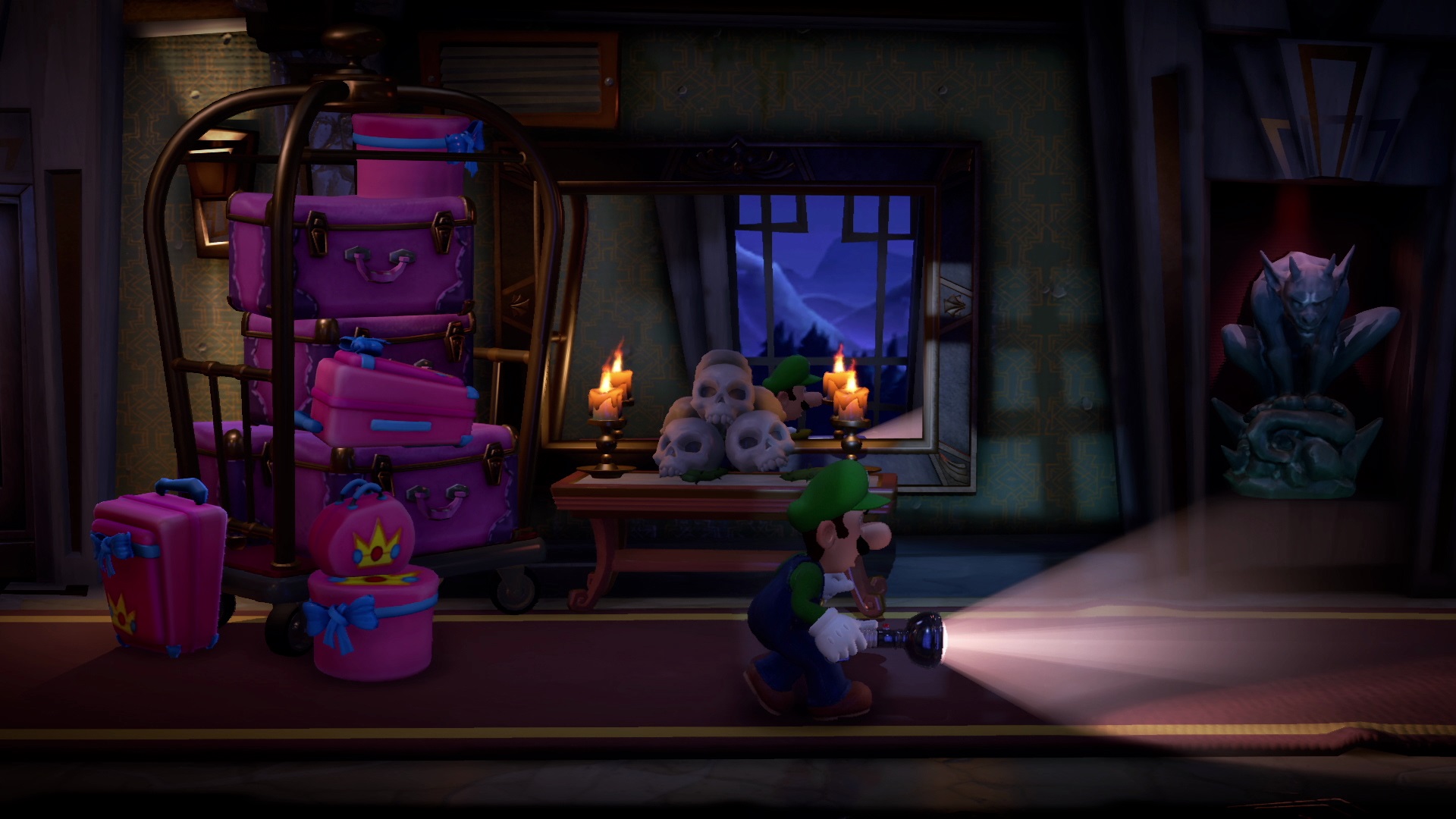 When it comes to boss fights, you’re still stuck to the traditional mechanics. Solve the puzzle, hit the boss three times, and you’re onto the next one. This is in no way a bad thing. Fans of Nintendo know this mechanic all too well. It’s a simple formula, but one that rewards players. However, the most important aspect is that it’s just so much fun to play. I found myself chuckling on many occasions as Luigi cried out in fear or a ghost going from malevolent stare, to running in fear. It felt like I was playing an episode of the Looney Tunes and I didn’t want to stop. The game is designed purely for the fun factor.

...I couldn’t help but laugh at how some of the characters expressed themselves.

Everything in the game feels like a living (or dead) caricature. The impressive detailing on how everything expresses itself is something that left me in awe, and I couldn’t help but laugh at how some of the characters expressed themselves. Not in a bad way, but rather, in a way that let me enjoy what I was seeing on screen. In the time that I had with the game, I felt like a little kid playing games in front of his parents and laughing with them as the characters went about their day.

There are so many things going right for Luigi’s Mansion 3, but we will have to wait for the full review to see how everything holds up. For now, Nintendo seems to know what they’re doing. From what I’ve played, you just needed to know your controls and have a keen eye for your surroundings to move onto the next level. The game felt linear, but the secret areas and locations to discover make it feel a lot bigger than it is. 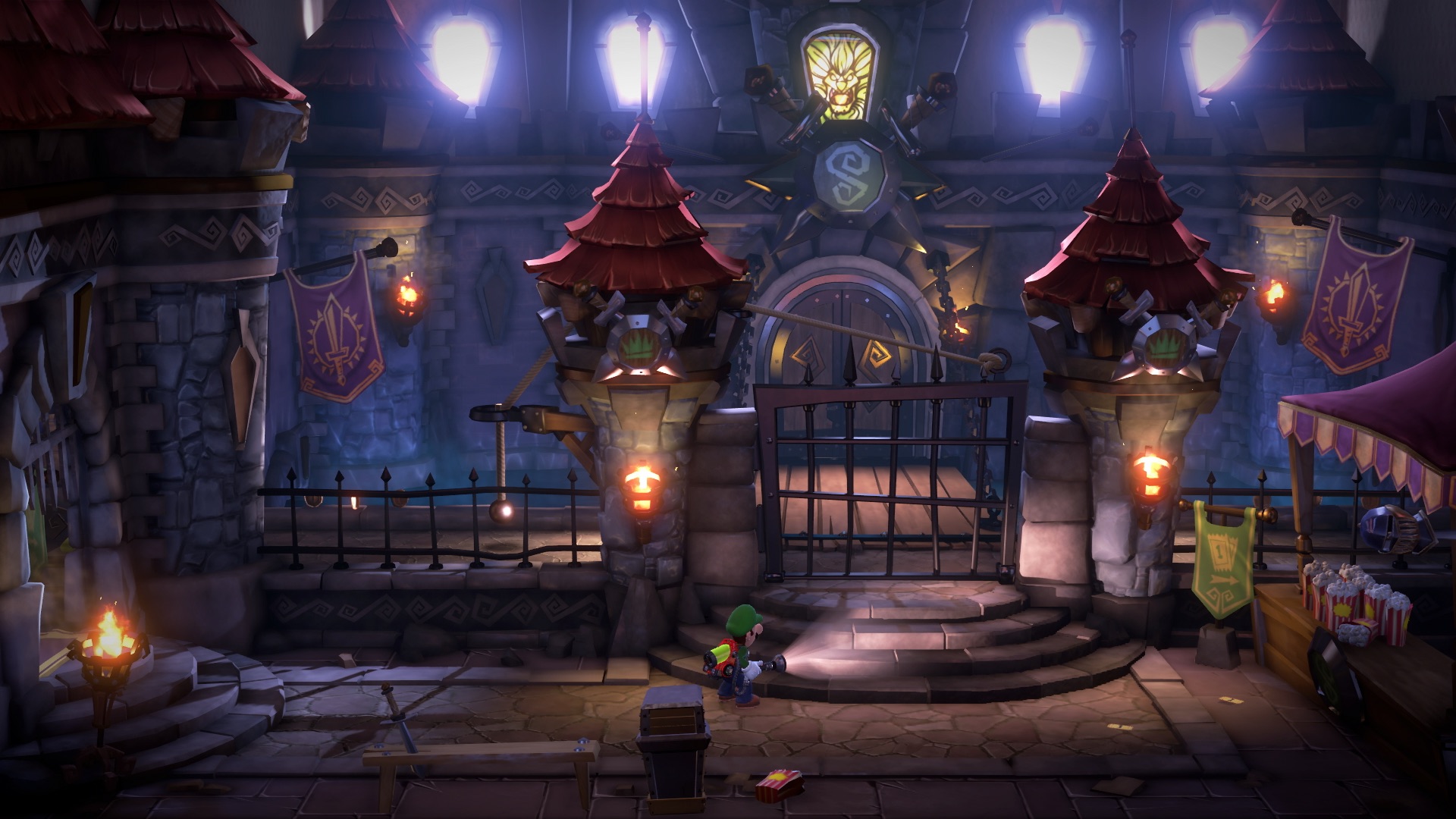 In the limited time I got with Luigi’s Mansion 3, I was open to a world filled to the brim with mindless fun, intuitive puzzle-solving, charisma, and a myriad of pathways to explore. While the game is still a while away from launch, this demo gives me confidence that the full game will bring yet another hit from the ongoing series. Take that Mario!