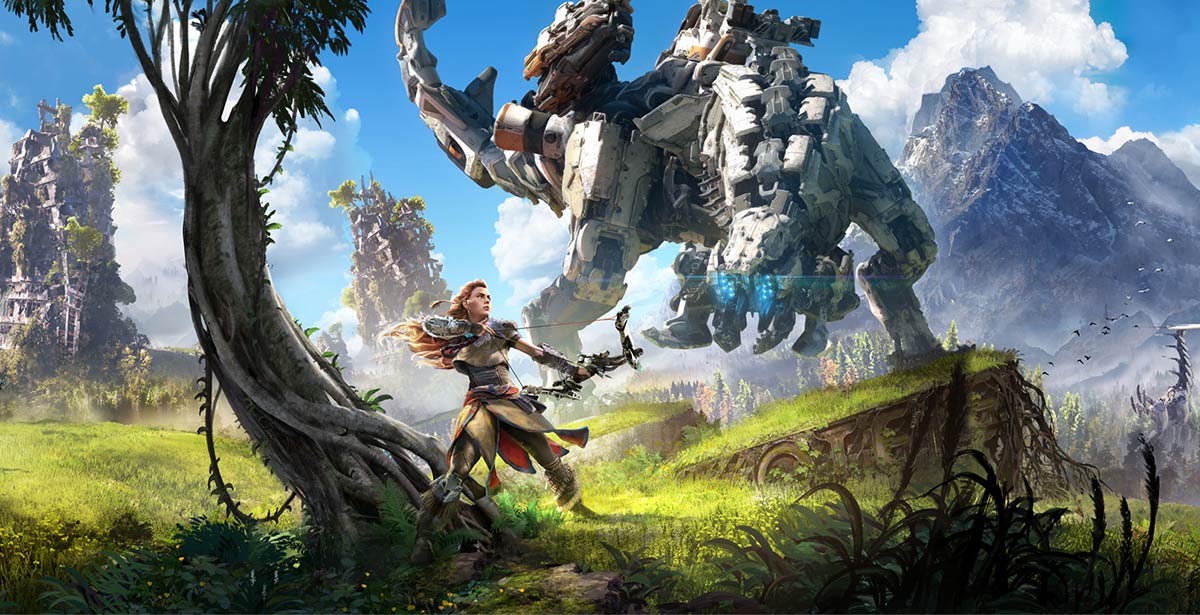 NB: This game was reviewed on a standard, launch-model PlayStation 4.

In a world obsessed with post-apocalyptic stories, what could possibly set Horizon Zero Dawn apart? It’s simple: robot dinosaurs. Also, if you want to get technical, it’s post-post-apocalyptic. That’s already quite an intriguing mix. Throw in a bushy-browed ginger protagonist, and many people were sold (well, I was). With Sony throwing their full weight behind this title, has it lived up to the hype, or is it yet another miss for Sony in less than a year?

Developed by Guerrilla Games (originally of Killzone fame), Horizon Zero Dawn is a first-time open-world action-RPG for the studio. It’s an RPG in the way the Witcher III was, mixed with a simpler upgrade system, more akin to Shadow of Mordor than any Bioware title. 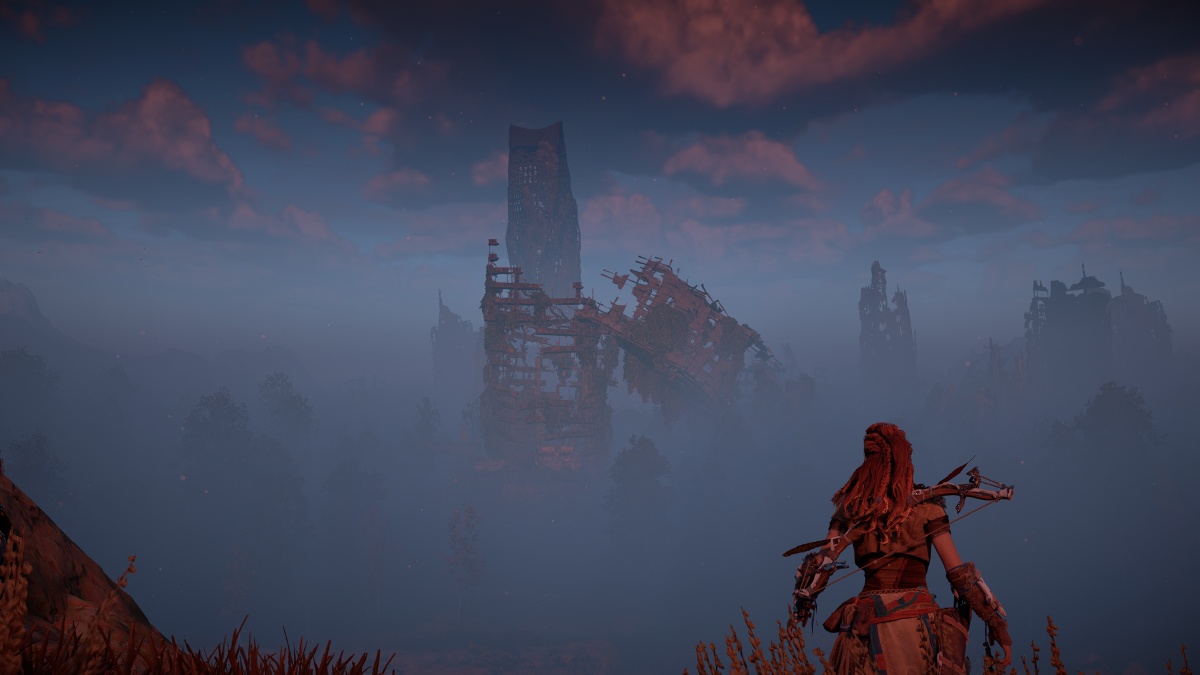 Horizon Zero Dawn delivers on the two most important fronts for any action RPG: story and gameplay. The story and the setting provide a level of intrigue beyond anything I’ve played in recent years. What immediately hooked me about the setting was the resemblance to the far future described in HG Wells’ The Time Machine, but obviously without the Morlocks or Eloi. There is absolutely no indication given as to how far in the future this takes place. All you have as your initial clues are the ruins of the “Old Ones” and the animal-like machines that dominate the land.

Aloy (our ginger protagonist) is an interesting character. She is initially of the Nora tribe, a matriarchal society who worship the mountain they live on called “All Mother”. Raised by an outcast as an outcast, Aloy seeks to find out more about her heritage and why her tribe have shunned her from birth. What follows is an intriguing and engaging story. It’s not revolutionary, but it’s a nuanced commentary on the human condition that pervades, even after regression to a Stone Age-like society.

In a world where everyone has an agenda of some sort, it’s refreshing to have a strong female protagonist who isn’t sexualised or who always points out that she’s a girl. It’s the kind of subtlety that draws attention to the story and the great character that she is. Aloy has a charismatic and enjoyable personality, and she displays great wit and humour in dialogue options, even when speaking to herself. How her character develops over the story is almost as intriguing as the main mystery itself. Guerrilla might have succeeded in their goal to create a new PlayStation icon. 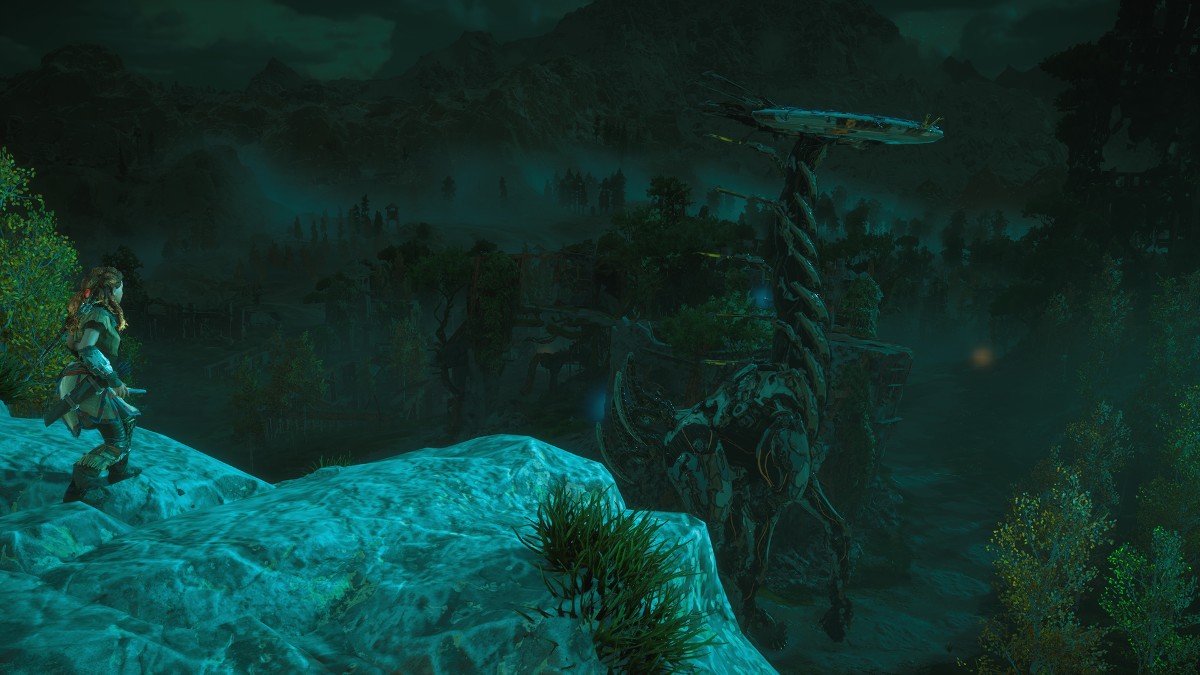 Dialogue options don’t affect the storyline, but rather Aloy’s demeanour and attitude to others. There are three options: a fist, a brain, and a heart. The fist and heart are both emotional responses, one being fiery and defiant, the other empathetic and sentimental. The brain usually takes the logical and reasonable route through dialogue, providing a more “balanced” view. It’s not a deep mechanic for an RPG, but for a story that is linear it helps to mix up your character’s dialogue choices ever so slightly.

As an open-world RPG, Horizon Zero Dawn hasn’t arrived with the intention of revolutionising the genre. The developers have taken several well-established elements of open-world RPGs and stuck to them. However, none of them come across as boring and bland. For example, the map is shrouded in a fog that you either clear by visiting locations or by climbing and overriding a “Tall-neck” (that long-necked robo-dino with the Starship Enterprise head). Each one you encounter is in a different environment with individual obstacles to overcome, providing variety.

The open-world itself isn’t massive for the sake of being so. In fact, it feels distinctly smaller than some modern titles. The entire area is probably comparable to Velen and Novigrad from The Witcher III or either Far Cry 4 or Primal’s maps. Make no mistake, the play area is large, but at no point does it feel like there’s just endless space filled with needless fluff to occupy the player. Each area comes with its own hook to explore and the opportunity to learn more about the context you find yourself in, with significant gameplay and narrative rewards for doing so. Also, the in-game map itself is one of the coolest I’ve ever seen, with a top-down topographical style that fits the game’s excellent design language. 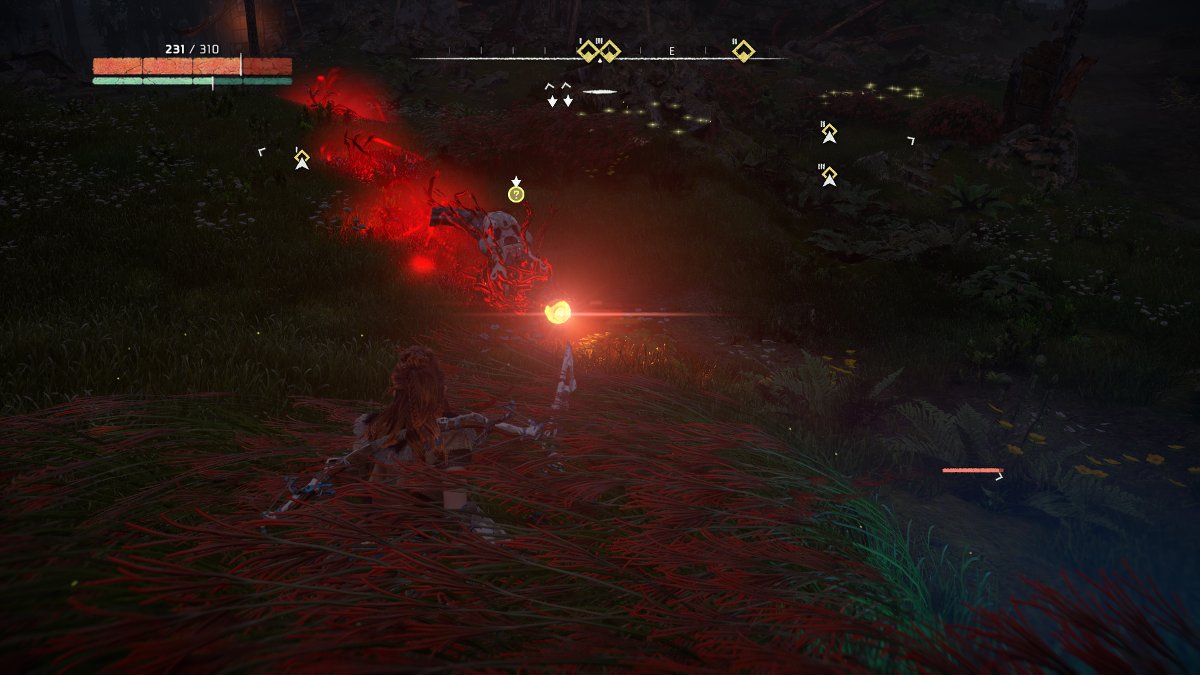 There is a large array of hostile machines you will encounter, along with several ways to deal with them. Aloy’s main weapons you start out with are her spear and her bow. You can buy and equip a variety of bows, each with their own strengths. There are four slots on the weapon wheel, and you can equip whichever weapons you want to any of the slots, in any combination. Your spear is always equipped and acts as your melee attack for stealth kills and close encounters. Also available is a variety of traps and other projectile weapons that expand your tactical options.

The game has a strong emphasis on stealth, while maintaining an accessible approach to it. The AI can be utter idiots, like when you call a guy over to a bush you’re hiding in while his friends’ corpses are piled in front of him as a warning not to approach. Stealth veterans will find this aspect of the game to be too simple.

Combat with machines hinges on how prepared you are. You need to know the machine’s weaknesses (or strengths) and have the right ammunition to deal with it. Often, you’ll encounter several lethal robots at a time, and it will become an exercise in managing your position and those of your enemies. Dodges and rolls are vital to survival, especially when facing the terrifyingly large machines. The game rewards preparedness, using stealth, setting traps, and hitting enemies from a distance with your arsenal of bows and various arrow types. A considered approach ensures surviving encounters. 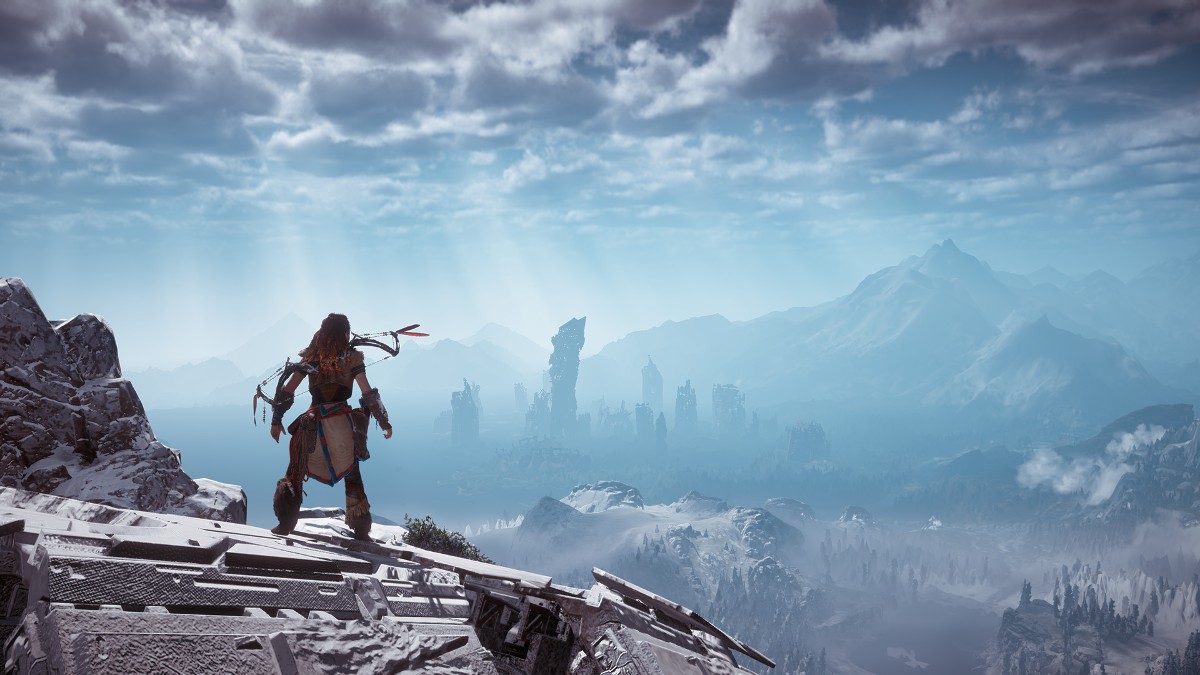 Visually, the game is phenomenal. The aesthetic is breath-taking at times, aided by excellent dynamic and volumetric lighting. While textures can pop in occasionally, this is a reasonable payoff of a lack of loading screens (except when dying or fast-travelling of course). The draw distance is astounding. When I entered the largest area of the map, I was able to scope out machines strutting or flying around their patrol areas from across the play area. All this without any major performance issues. Framerate remained stable, even at the most demanding of times. Being a reasonably large open-world, there were one or two notable hiccoughs, but they were rare and overshadowed by the exceptionally good and consistent quality overall. The game is both visually and technically a marvel.

The one area of the game that deserves a bit of criticism is the lip-syncing. On character models as richly detailed as these, in environments as gorgeous as this, having poor lip-syncing is in stark contrast to the overall quality on display. Hopefully a patch will sort it out at a later stage.

As if aesthetic acuity wasn’t enough, sublime sounds supplement superb sights. The music and general sound design are great, with a varied score always setting the mood tastefully. The voice acting is satisfying, for the most part, often delivered at a measured pace rendering subtitles irrelevant for most. The roar and grind of machinery grates on your nerves as you try to sneak past a colossal heard of behemoths. The sounds of nature and flesh-and-blood creatures sooths you in times of calm. 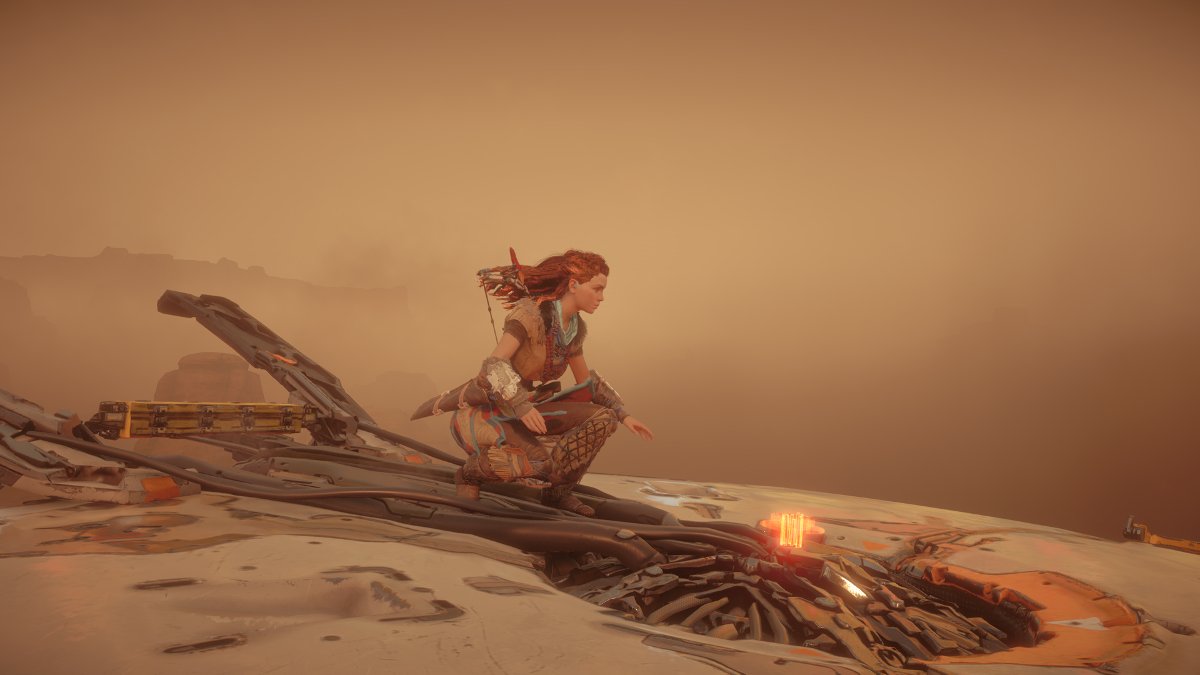 Horizon Zero Dawn is a perfect mixture of great gameplay and excellent story. It has introduced PlayStation’s next big franchise and its next iconic figure in Aloy. The dissonance of Stone Age people living together with futuristic animal-like machines is a mystery steeped in intrigue, set in an open-world with rich rewards for exploration. It is rare that a game fulfils the hype, and this game has exceeded it. Without needing to revolutionise anything, Horizon Zero Dawn has stepped onto the scene and announced its presence with a shout and a bang.

Mr Hat Thing
You'll have to play it to see. It's difficult to avoid giving a lot away here, but the overall story is coherent, internally consistent.

Scottie
Does it have a proper explanation for the existence of seemingly pointless mechanical beasts? 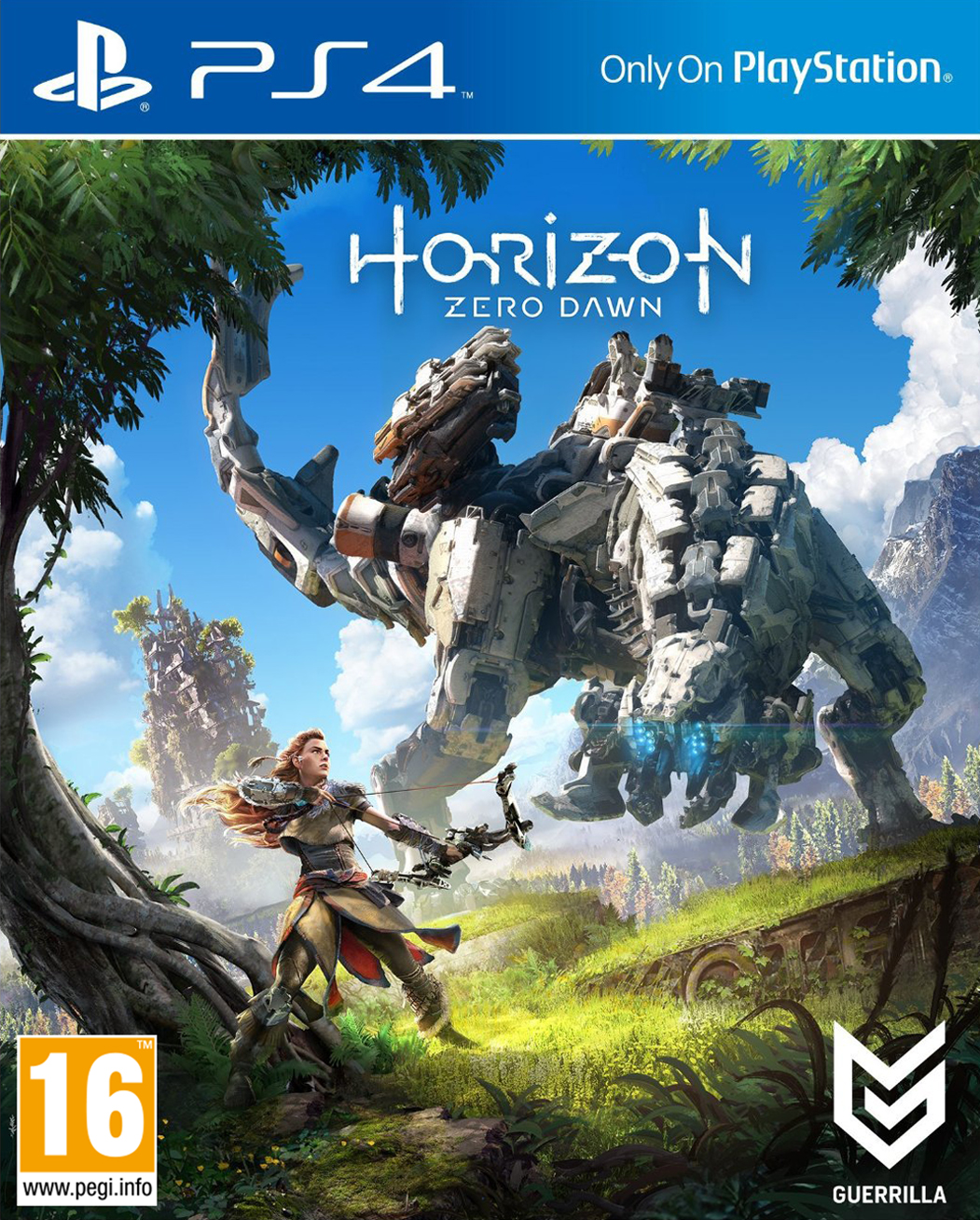