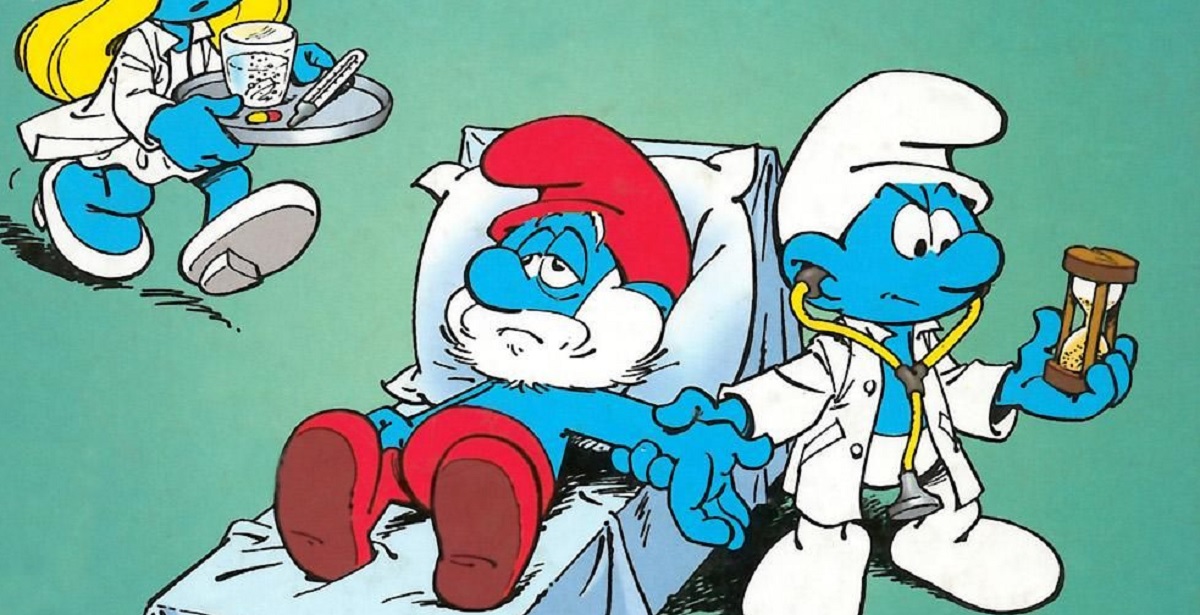 It’s hard to smurf smurfs that are still smurf and smurfable for smurfs, have a story and a point and even a smurf, and are well smurfed and smurfable to smurf.

Let’s try that again. It’s hard to find books that are still fun and enjoyable for kids, have a story and a point and even a lesson, and are well told and enjoyable to read. Well the Smurfs always managed to be great stories, for all ages, and these reprinted collections of the classic strips by Peyo, from Papercutz publishers, have really done an amazing smurf of it! I mean, "An amazing job of it"! Doctor Smurf is the 20th volume in Papercutz reprinted Smurfs graphic novels, which cover some awesome and timeless smurf tales, like The Purples Smurfs (which was probably the original zombie plot!), The Smurfette, and Smurf Vs. Smurf, to name but a few. 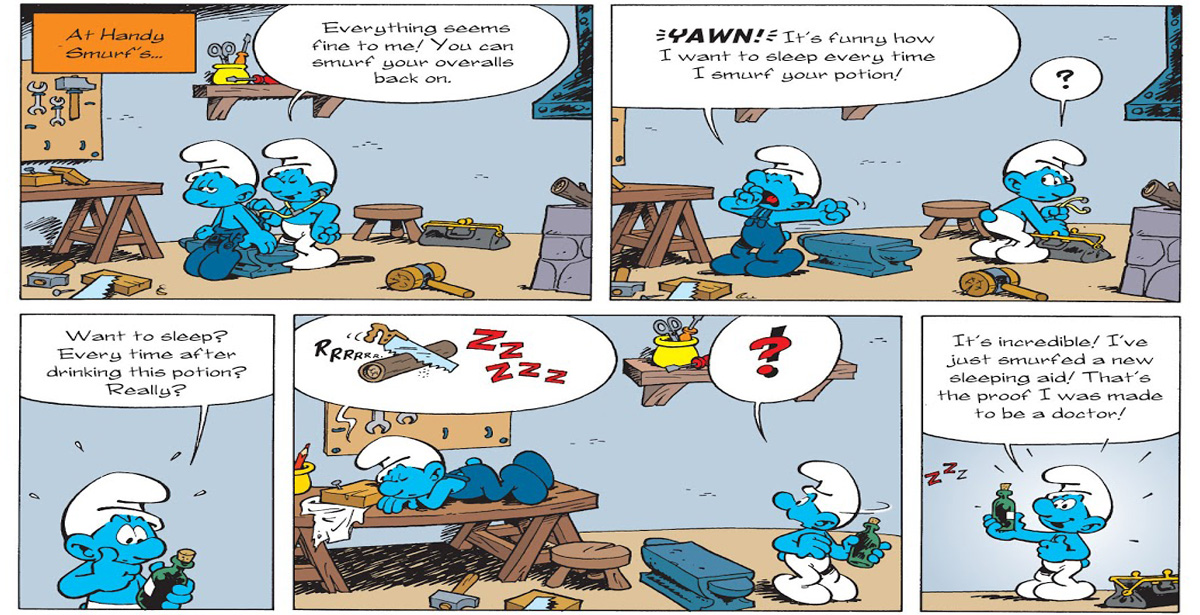 In the graphic novel “Doctor Smurf”, one innovative, if misguided smurf, decides to take it upon himself to try to treat sick smurfs when Papa Smurf is very busy and doesn’t want to be disturbed. Unfortunately, the well meaning smurf doesn’t really have any medical knowledge and is just guessing at what to do, and concocting random potions to try to cure the sickly smurfs, many of whom are not sick at all but have only been made to think they are by all the hype that is going around with having a new doctor and with all these new “cures”.

Soon Doctor Smurf has convinced a few of the other smurfs that they are really ill, and that they need his treatment to get better. Handy Smurf now believes he is suffering from anxiety and Greedy Smurf is told he is an ounce overweight and needs to go on a diet. Handy Smurf’s workshop is turned into a hospital as more and more smurfs seek out Doctor Smurf to aid in their troubles or to help them get out of work, and they even get an ambulance service running for emergencies. 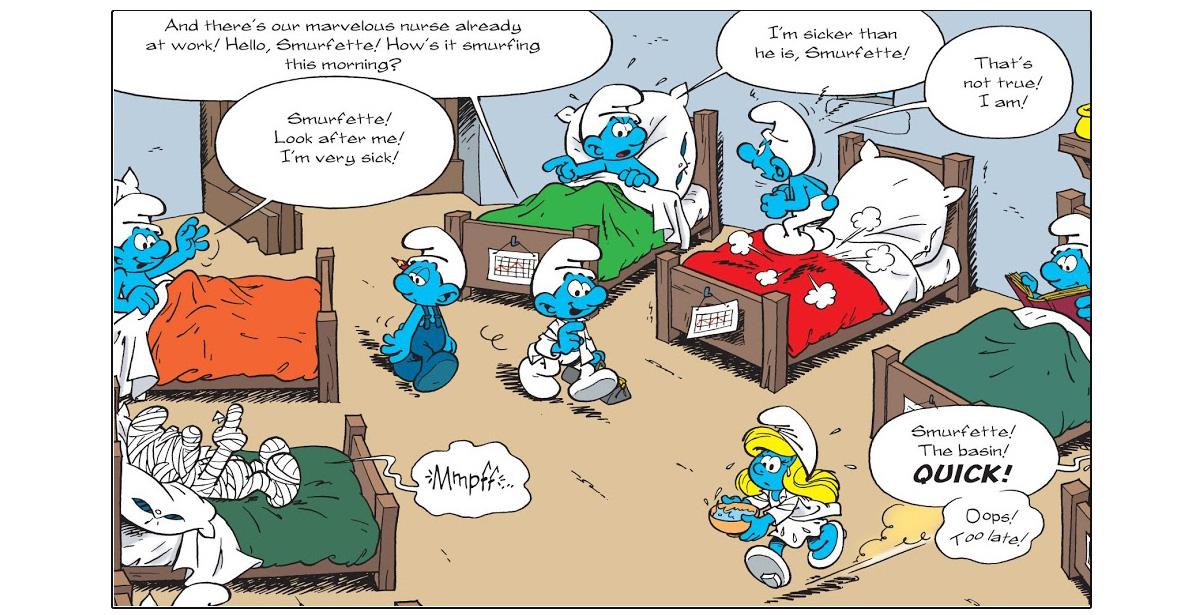 As other smurfs also start to try their hand at different medical professions, like acupuncsmurf and psychosmurfy, regrettably also with no knowledge or experience in their chosen fields, it, in turn, leads to even more disastrous results. The smurf villagers are now torn between three completely different approaches to all their medical problems, which each of these new doctor smurfs are convincing them that they have. With all the smurfs now believing they’re sick and in need of treatments, the village starts to fall into a state of disrepair as none of them do any work or maintenance. Then when Papa Smurf, and later Smurfette, actually become sick, for real, chaos ensues as these fake medical professionals pretending at their jobs are incapable of helping two of the most important smurfs in the village.

The Smurfs graphic novels are light hearted, easy to read, with cute and humorous illustrations, original but not overly convoluted narrative, and 100 percent, completely and utterly, SMURFY. 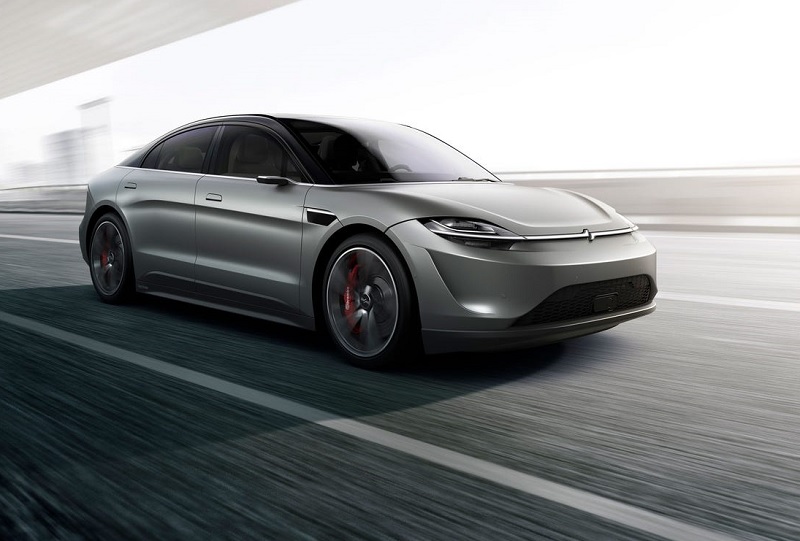