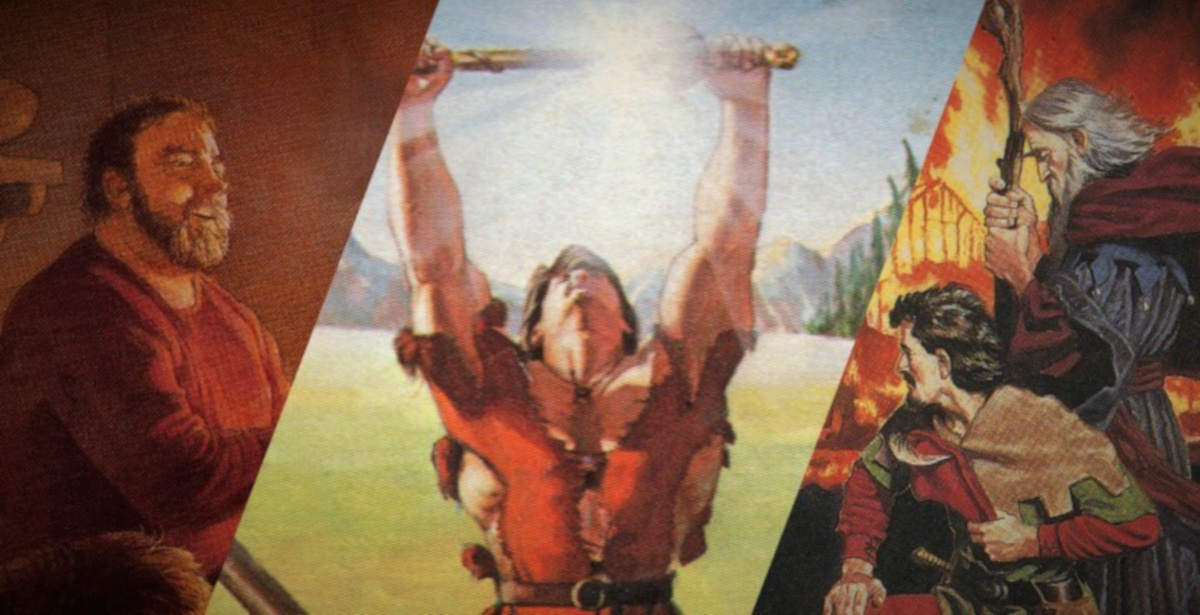 Games are progressing at one hell of a rate - the complexity of gameplay mechanics and the audio-visual experience improves with every generation. We also have more games coming out than ever before, so just keeping up with current releases is a challenge. However, it’s still worth remembering the games that served as the foundation for many modern IPs, prequels that set the scene for future narratives, or unique games that have never been surpassed. Taking the former name of GOG – who have become instrumental in preserving many classic titles – the "Good Old Games" feature aims to highlight some of the most influential, interesting, or unique titles that you can still play today.

Normally when looking to promote a “good old game”, I’ll pick something I feel has (relatively) timeless gameplay. Gameplay in The Bard’s Tale Trilogy is both good and timeless, however, despite sporting remastered visuals, a new control scheme, faster levelling, and unified gameplay mechanics across the trilogy, there’s no getting over how old it all feels in action. That said, the first game in the trilogy, Tales of the Unknown, came out in the year of my birth, so maybe I should be less critical.

I figured with The Bard's Tale IV: Director's Cut finally arriving on consoles this month, it was time to tackle the remastered classic trilogy and see what the fuss was/is about. Irrespective of where you start, each game in The Bard’s Tale Trilogy was built on the same engine, utilising the same underlying traversal, combat, and progression mechanics. The sequels spruced things up with greater environment and enemy diversity, some expanded combat and puzzle mechanics, and even rudimentary cutscenes for the second game, The Destiny Knight (before going back to walls of text the third game, Thief of Fate). 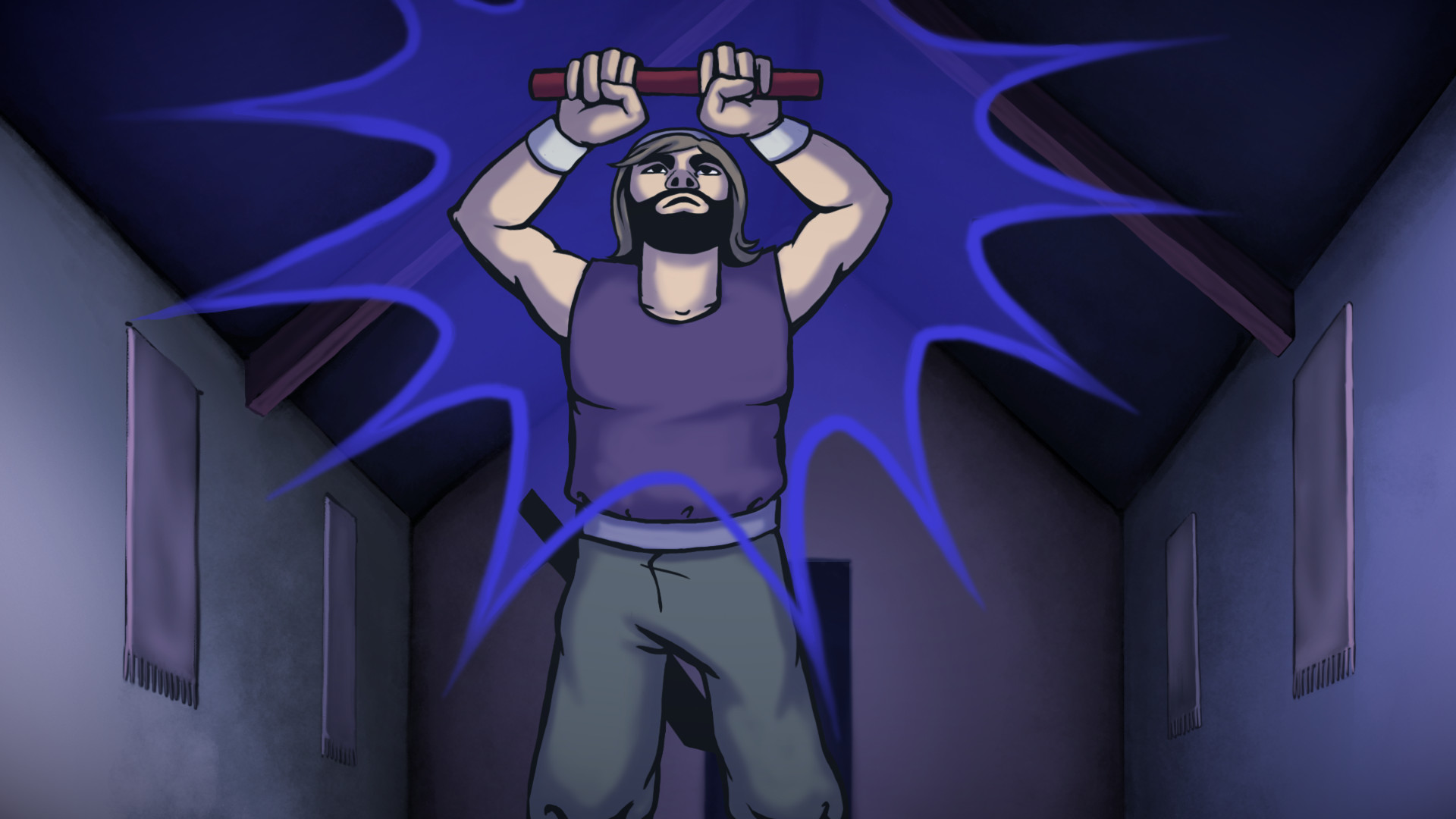 Behold - 1986 RPG cutscenes! If modern developers and publishers spent less time and money on flashy marketing material, and more time on engaging RPG gameplay, maybe we’d be debating our favourite quest outcomes, rather than the impact of loot-boxes on gameplay.

Events across the trilogy form a continuous story arc but there’s not all that much depth to the narrative - outside of a lengthy introductory and closing scrawl to each chapter. Rather, it’s the so-bad-its-good bardic poetry, entertaining character descriptions and flavour text, and the barely-animated yet expressive portraits that’ll sell the experience. If you’re looking for a narrative-driven RPG, turn back now. The Bard’s Tale Trilogy is a gameplay-focused, dungeon-crawler of yore; your primary motivation is going to be developing your party into a diverse, high-level, well-equipped, monster-slaying force.

The overall goal in every game is straight forward – save the world from some menace by collecting important items in dungeons. Tales of the Unknown has you explore and clear five dungeons in the town of Skara Brae to defeat the evil mage Mangar, and free the citizens from the spell of Eternal Winter. Next up, The Destiny Knight has you explore a wilderness with six mini-cities, collecting seven pieces of the Destiny Wand before facing off against an evil archmage. The final chapter, Thief of Fate, is the best of the bunch, deviating from the “fetch X number of items” formula, or at least doing a better job of hiding it. You’ll explore the ruins of Skara Brae and the surrounding region, attempting to thwart the plans of the Mad God. Multiple quest givers will send you to different regions, and even different realms, gearing you up for the final confrontation. 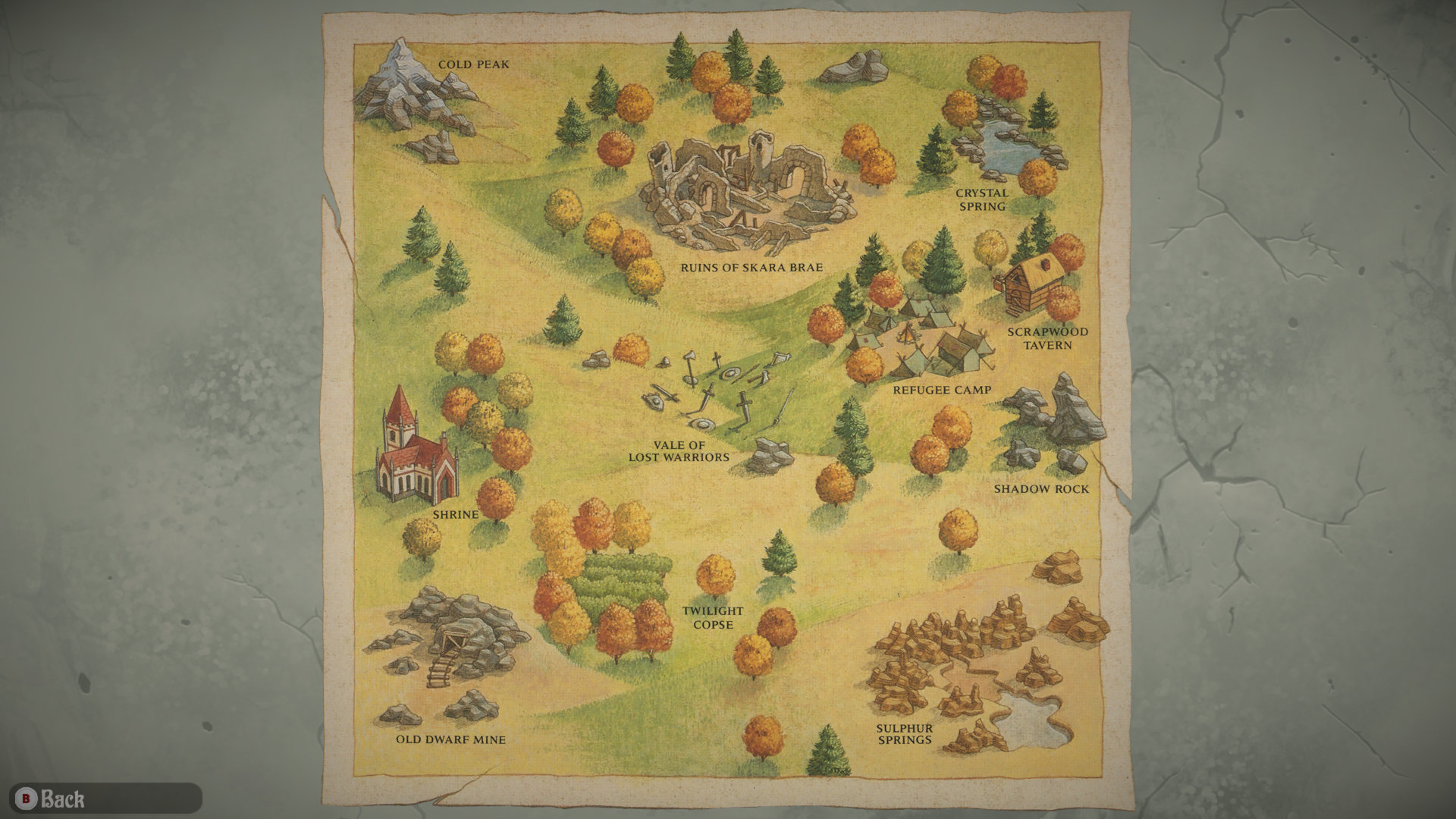 While the original game has you trudging through a samey looking city between dungeon-delves, the sequels take you to far more diverse and interesting places (or at least as diverse as they can make it with limited assets).

However, as I stated before, these are mechanics-driven games. You’ll often be given a quest and sent into a lengthy dungeon, unlikely to see anything that resembles narrative for hours. Starting off at the Adventurer’s Guild (or camp in the third game), you can either select a default party of six (with a spare slot for your own creation), or roll your own party of Warriors, Hunters, Rogues, Monks, Conjurers, Magicians, Sorcerers, Wizards, and – especially important – bards. You can, of course, mix-and-match races, genders, and character portraits to your hearts content, and the sequels introduce three more magic-oriented options. Take note that when I say “roll”, I’m not talking modern D&D “roll for total skill points and redistribute them based on your class”; I’m talking every stat, including health and mana, relies on the luck of the dice. Sure, you’ll eventually balance out and maximise most stats during an average run but expect to spend some time on the party creation screen. Once you’re done, you set out into the town/wilderness, come to grips with the party view on the left of your screen and stats on the right, then trudge along, grid-by-grid, to the nearest store and gear up your frontline fighters – the first four in your party list – to help them survive some savage odds.

The Bards Tale Trilogy is not one for holding your hand in the opening hours (or most of game for that matter), so you can run into lowly mobs to cull just as easily as you stumble into a devastating mix of high-level melee, ranged, and magic users. Attempting to flee is almost always a good call until you feel properly equipped to grind out some battles. When battle is unavoidable, don’t expect some visually spectacular clash. Each turn, you’ll task each party member with an action – only able to target groups of foes rather than quickly dropping individuals – then watch both your party and the enemy slug it out (with attack orders dependant on your stats). Sure, you’ll some slashing or sparkly effects over the portraits, but your only real feedback is the wall of text scrolling down the right-hand side of the screen. 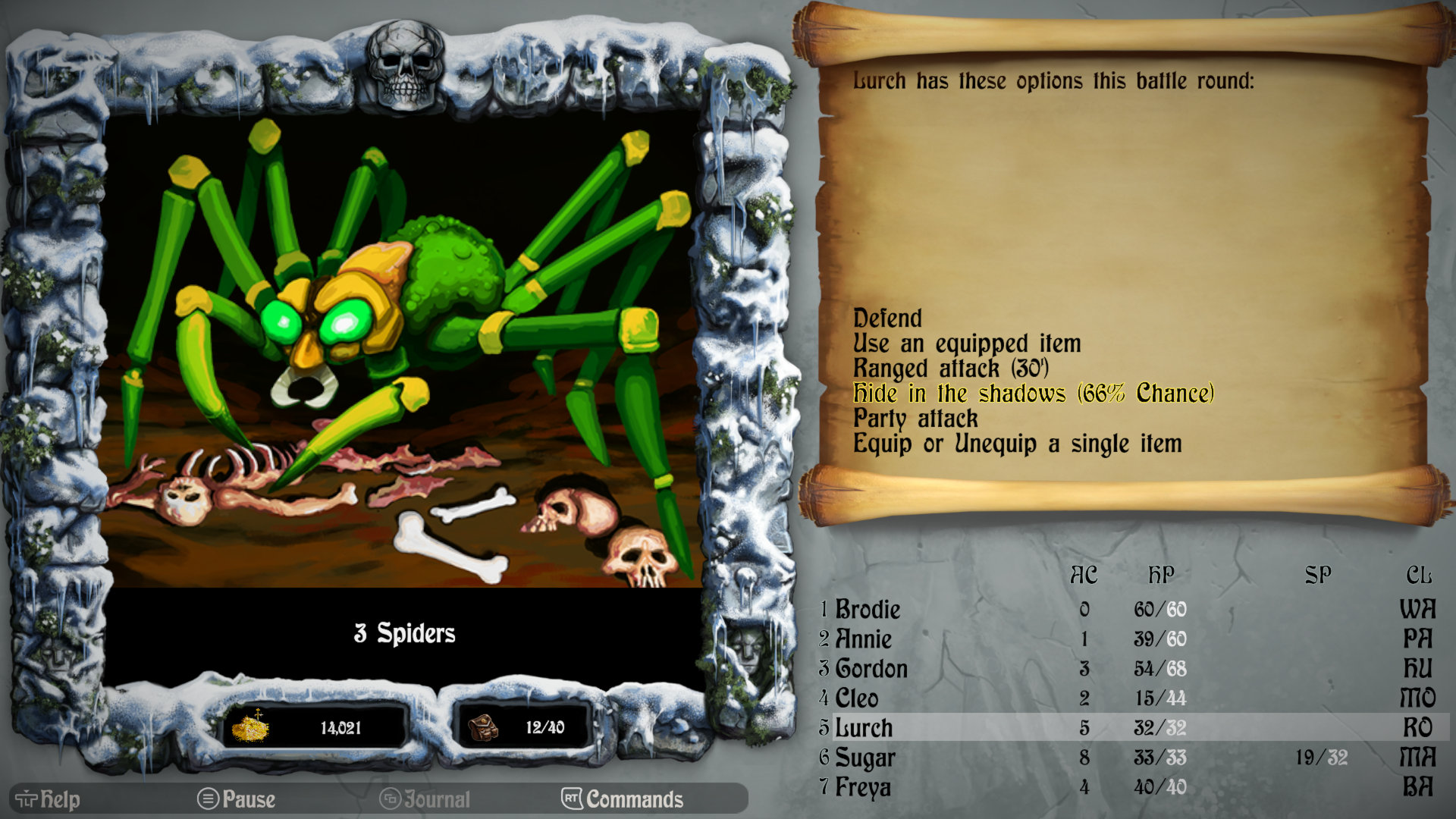 Marvel at the visual splendour of combat. It looks bland but, honestly, you get used to the simple interface and combat is brisk enough that you’re more interested in seeing a text notification informing you one of your characters has reached a new level.

Despite the somewhat bland visual experience, there’s real joy to be had in watching turns play out rapidly, especially when flinging spells around as magic-wielders (who you’d do well to target first every time), and everything moves at a brisk pace. Learning how best to optimise your party, considering placement, skills, and gear, is essential. Warriors can become walking tanks, soaking up damage. Hunters can eventually land critical-hits with almost every strike. Monks can gain insane armour bonusses and damage when fighting in light armour and with bare hands. Magicians can learn spells that’ll shield or heal your entire party, while destroying your foes. Bards – who require regular stops at a tavern to refresh their voice – provide passive boosts with their songs in and out of battle, and provide a pleasant background track while exploring.

Thanks to an increased levelling rate, your party will grow in strength quickly, but success in The Bards Take Trilogy is all about attrition, not single battles. Dungeons are convoluted, multi-level, trap-filled, maze-like abominations, often hiding essential clues or objects, while returning to town is often by way of one-way portals and gates - forcing you to backtrack through repopulated dungeons if you bug out early. At least the remaster offers an automatically-generated area map that allows you to optimise your route back, and you can toggle an on-screen mini-map. On top of that, throw in some puzzles that require obscure logic, note-taking, and hidden puzzle items, along with bosses that wield spells that can wipe your party in the right circumstances. Dungeon-crawling was a hellish slog back in the day and this is a game I’d happily recommend you play with a guide on standby. 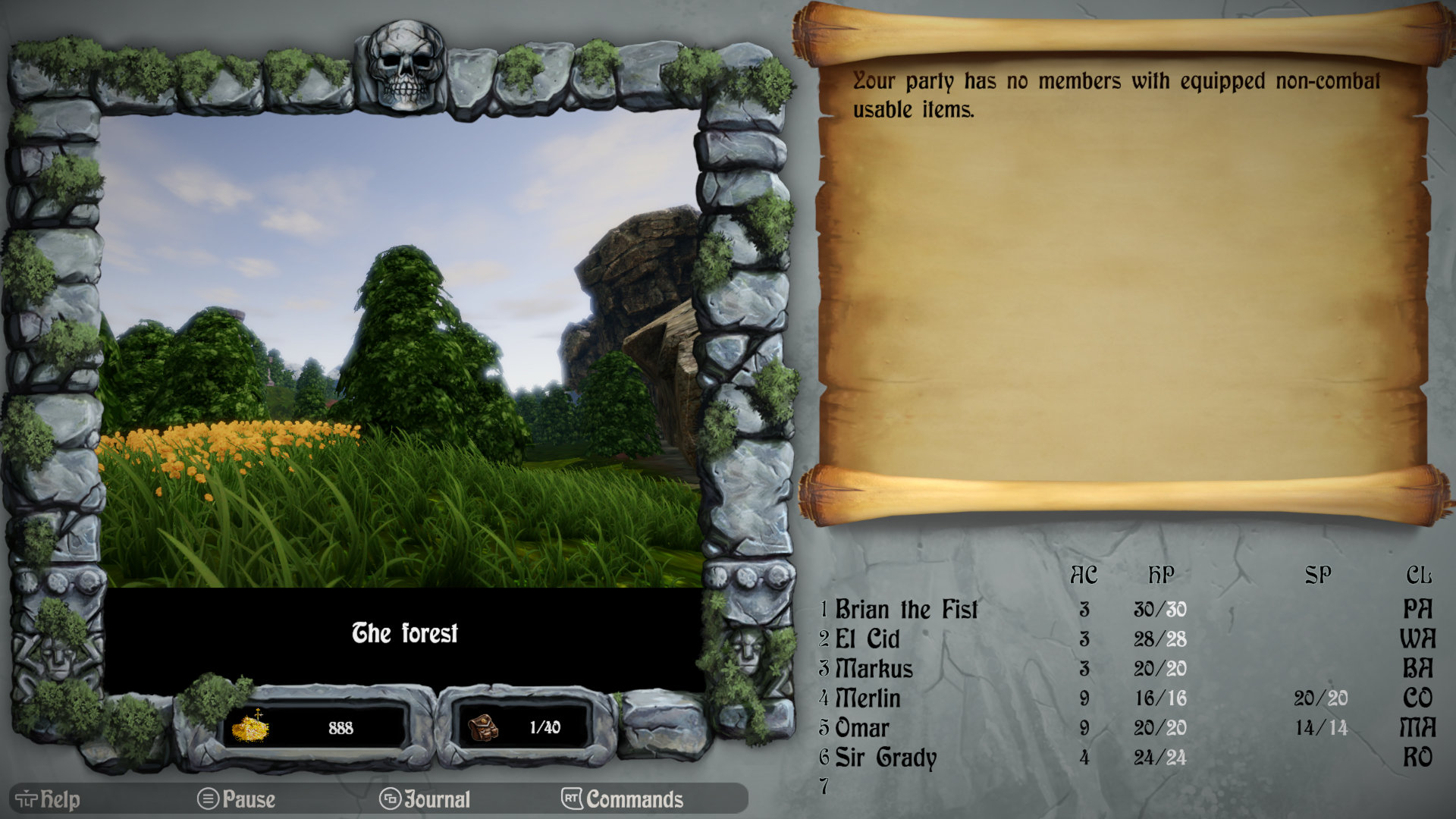 How best to describe the remastered visuals? Quaint? Your world view is limited but everything runs smoothly, colours are vibrant, portraits animated, and the flavour text brings locations to life.

Despite several dated elements, there is still something addictive and satisfying about plunging into a dungeon or exploring the wilderness for an hour or two, gaining enough experience for several levels (which requires finding the nearest “Review Board”) or finding a new magical weapon or hefty piece of armour. The visuals are huge step up from the originals (go Google it) and moving around the overworld or dungeons is silky smooth. The new gamepad controls are a great fit, especially seeing as gameplay is simple and menu-driven - playing on the couch is recommended. Last but not least, you can give The bard’s Tale Trilogy a go with minimal risk; it costs on R105 on PC and Xbox One locally, and it’s available on Xbox Game Pass for both those platforms if you’re subscribed.

You can follow this link to find more titles we consider "Good Old Games".