Perfection, thy name is. 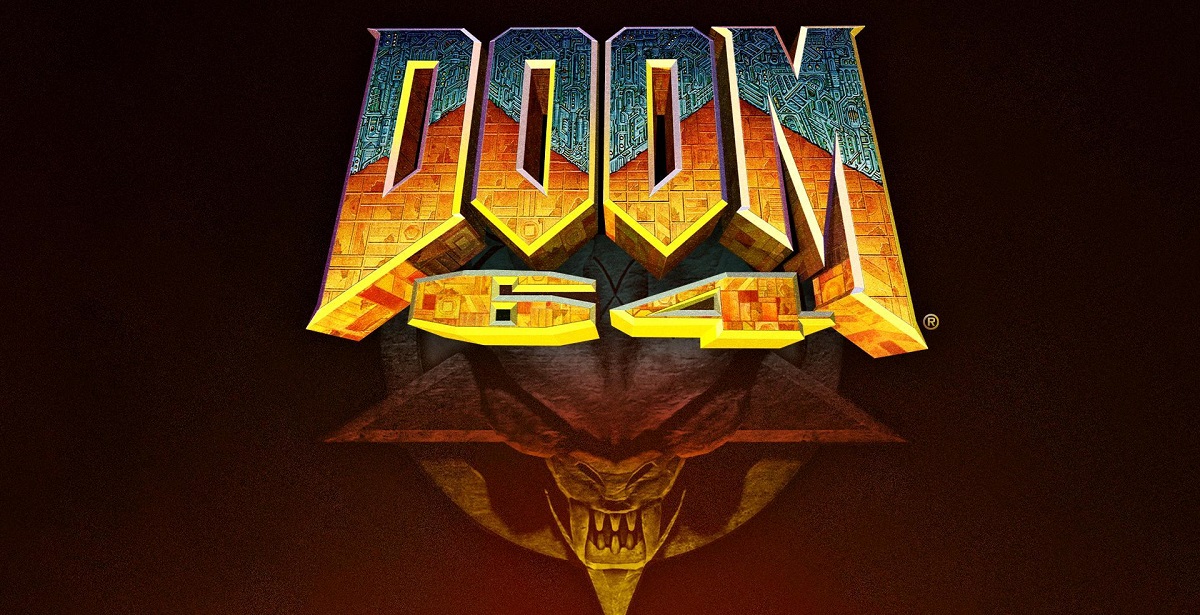 While DOOM 1 and 2 were been ported to practically every conceivable device under the sun between 1993 and 1997, Midway Games were tasked with bringing DOOM to the N64. Under iD’s supervision, the company went on to create DOOM 64. Originally called DOOM: The Absolution, DOOM 64 – as it was later dubbed for brand recognition – was actually the official DOOM 3 and largely went unnoticed thanks to its N64 exclusivity.

Built entirely from the ground up on a new polygon engine, DOOM 64 rightly had an entirely new campaign whose story – which you would have missed had you not read the manual – took place right after DOOM 2. The game contained all new maps, enemy sprites, weapon designs and sound effects. 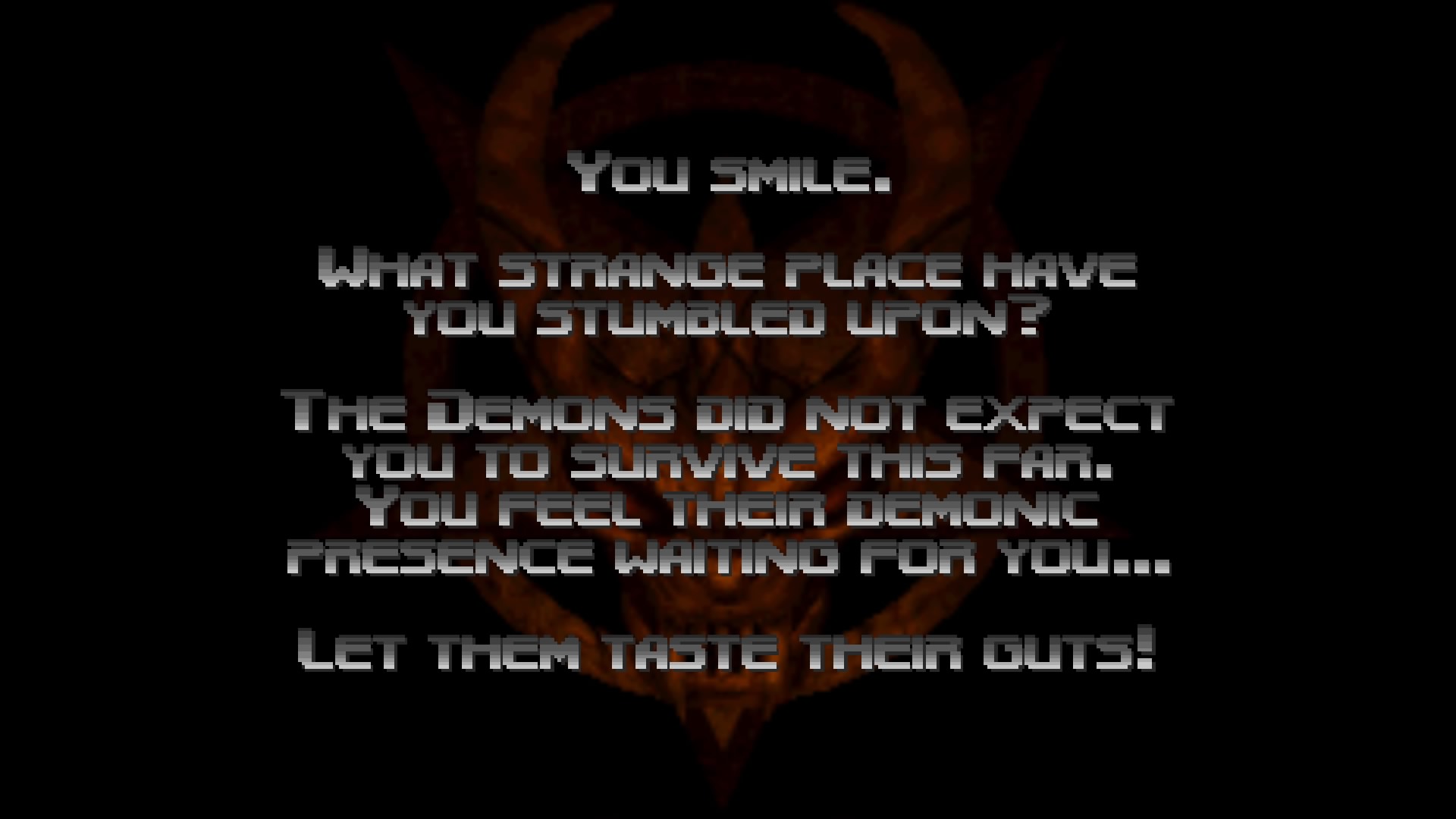 Using that spanky new 3D engine, Midway went on to create levels which, though not as large as anything in the original games, were fiendish, multi-level puzzles that usually looped back upon itself and, more often than not, were out to kill you just as much as the demons themselves. Crushing, burning, shot by arrows or stuck in lava-filled pits characterized much of DOOM 64’s brilliant level design.

DOOM’s iconic monsters got wonderful sprite makeovers as well, rendered in much higher resolution with more animation frames and detail and were just as deadly as ever. New enemies were introduced along with redesigns of old favourites. Midway also proved that they understood the core appeal of DOOM’s intense, high-velocity combat by providing some of the best FPS gunplay I’ve ever had the pleasure of guns akimbo-ing. 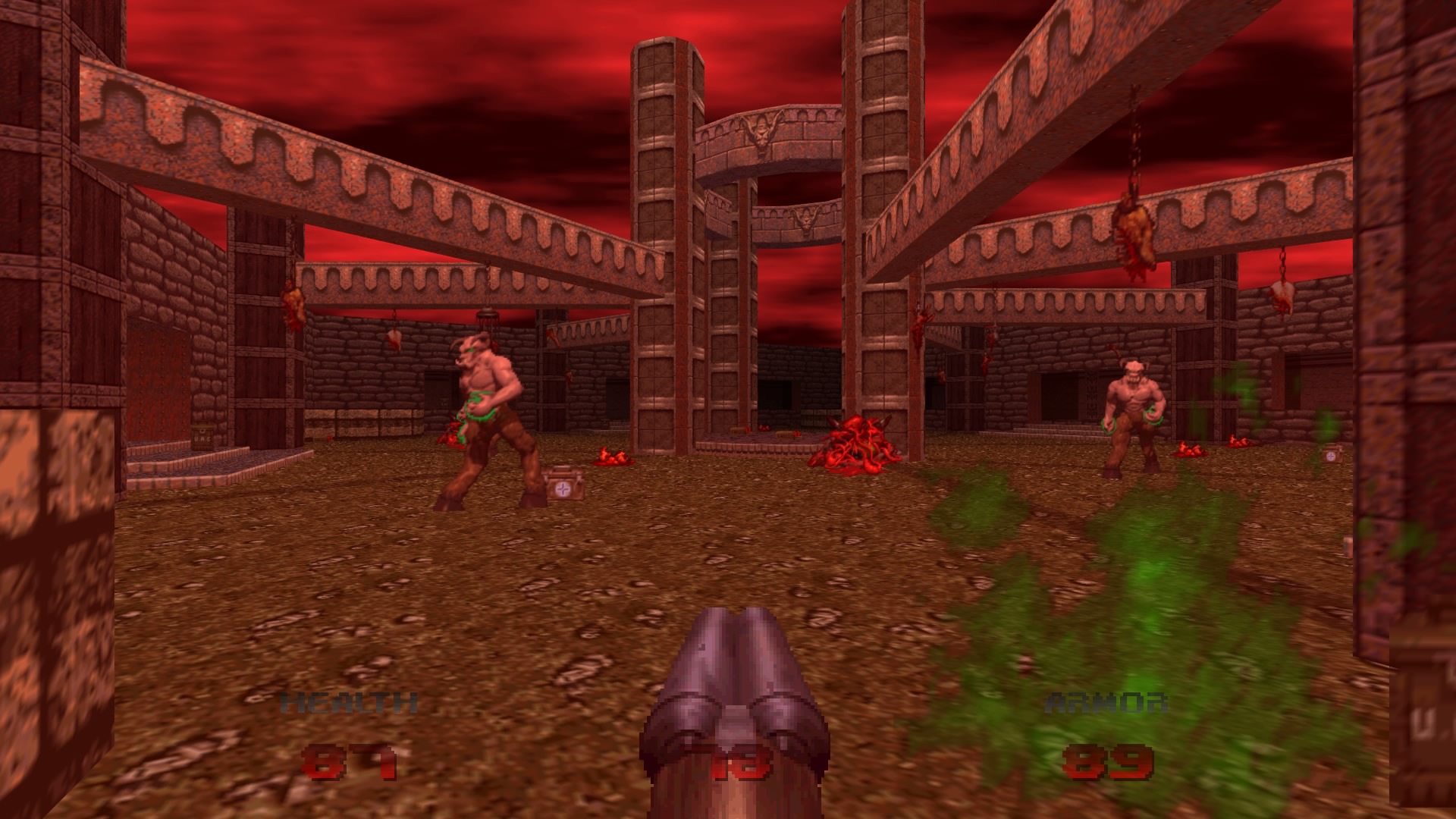 DOOM 64’s combat is blazingly fast, and that’s before you even put our favourite nameless marine's autorun on – it’s turned off by default. Once you do that, DOOM 64 moves at super smooth speeds, giving you more than enough velocity during a fight between Imps, Mancubi and Hell Knights to adeptly slip and slide between their projectiles, deliver a lethal dose of double-barrel death to their ugly mugs before slipping away again with nary a scratch taken. It’s an incredibly cathartic and empowering experience.

DOOM 64 is no pushover either, even on the easiest setting.

But don’t let that fool you, DOOM 64 is pretty challenging too. Now while it won’t make long time DOOM fans sweat too much, DOOM 64 is no pushover either, even on the easiest setting. The game ramps the difficulty up significantly as you go through its 32 levels. A nice aspect of many games from this era, playing it on different difficulty settings doesn’t just change up the enemies health and damage dealing stats, but also changes up the monsters in the games different locations while adding more to pump full of holes. Where there were two Imps on easy, for instance, you may find two Hell Knights or a Baron on harder settings. Thankfully, DOOM 64 also makes the Cyberdemon a force to be feared again. 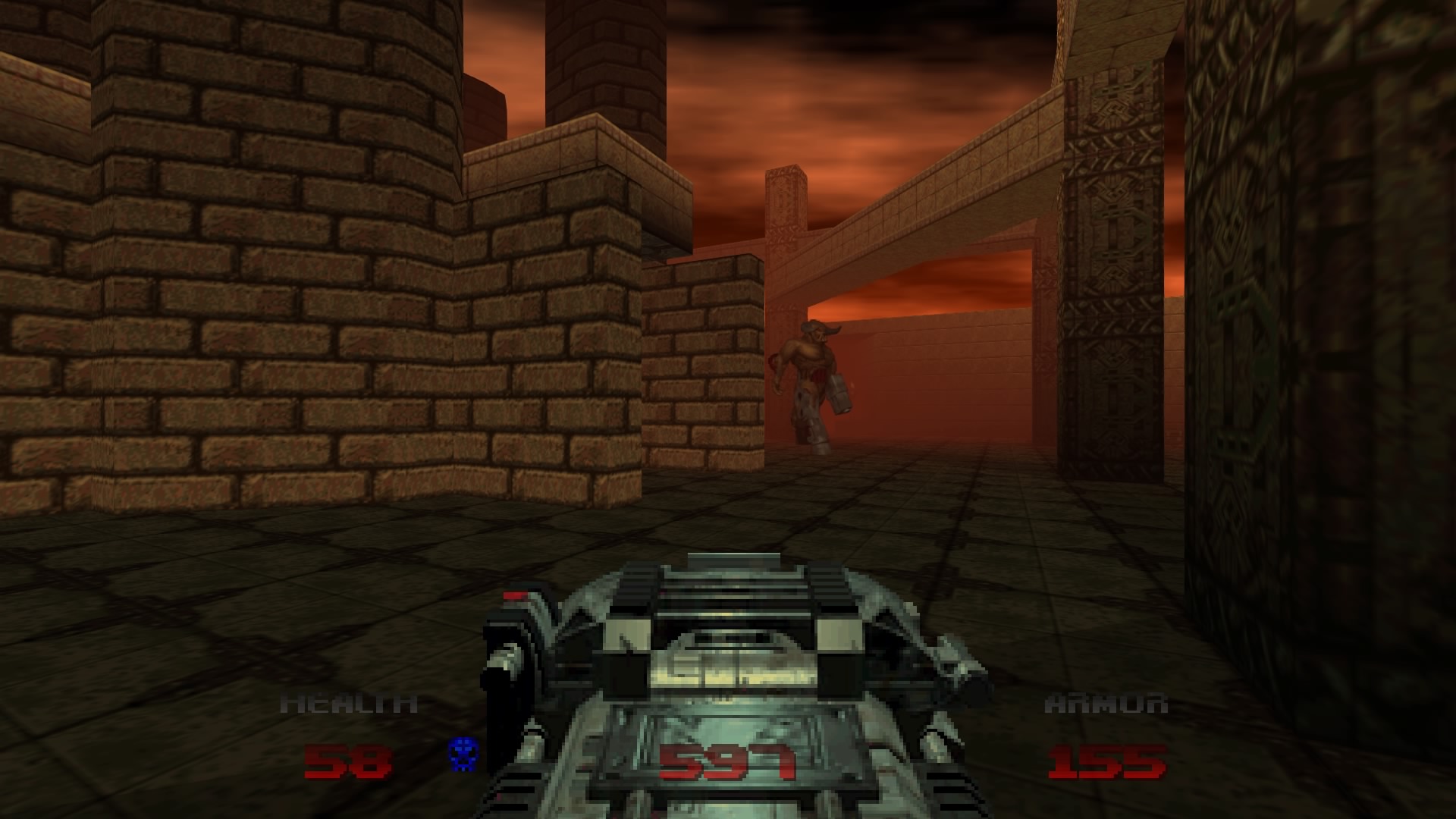 Unlike most of the DOOM games, DOOM 64 chose to forego a rock or metal soundtrack, instead opting to rely on ambient sounds to create the game's atmosphere. The few levels that do have music in them are of the doom-laden type, melancholic and oppressive which adds to the game's overall sense of desolation and despair. DOOM 64 is one moody, creepy game, an aesthetic that DOOM 3 later adopted to, initially, great effect.

Since its initial release, DOOM 64 has become a cult classic and the best DOOM game you’ve probably never played. 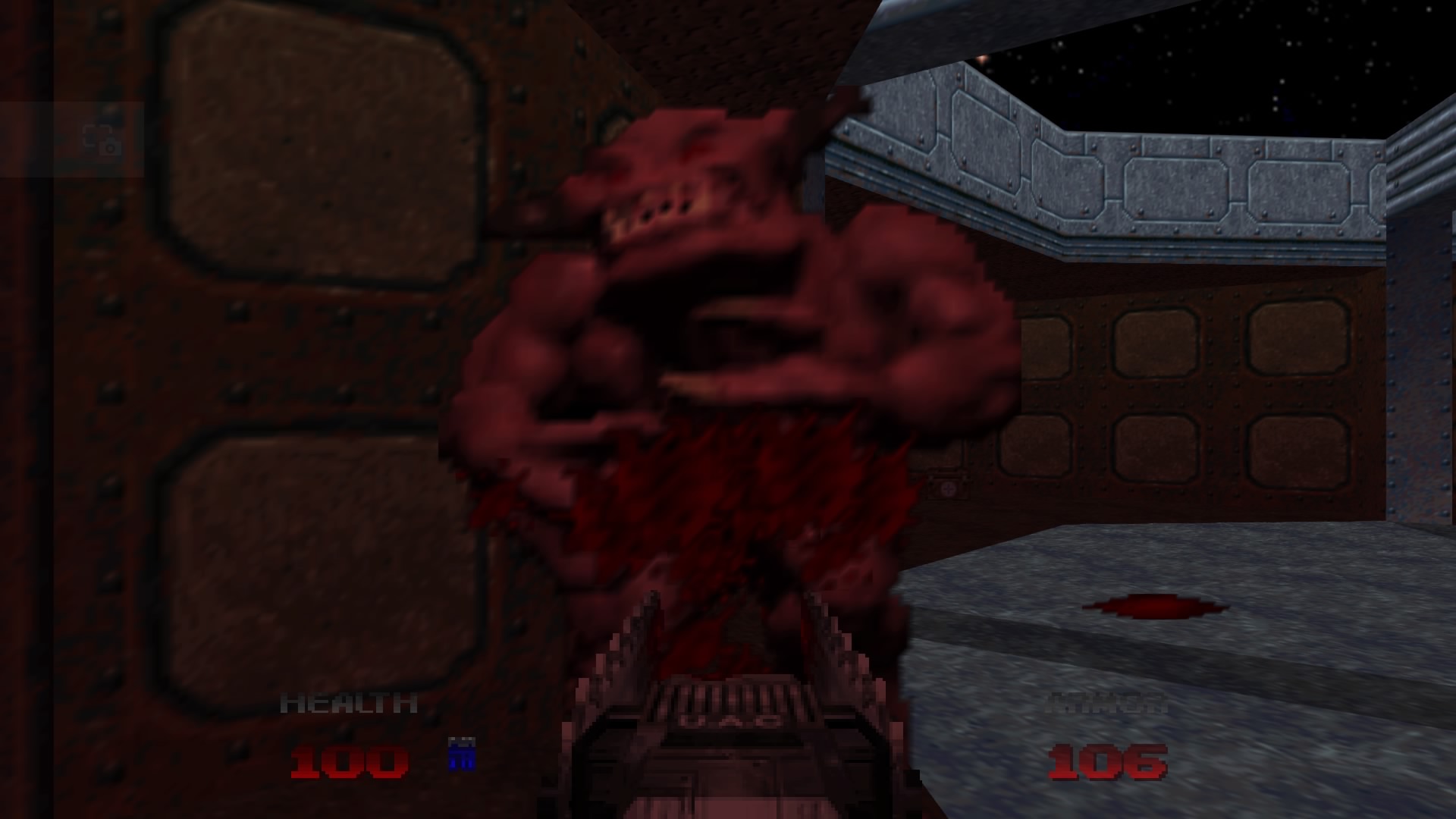 Which is all the more reason I’m thankful for Nightdive Studios for remastering this timeless beauty for modern gamers on PS4, Xbox One, PC and Nintendo Switch.

Nightdive’s work on this title has to be commended, especially as N64 games have a reputation for been hard to port or emulate. The game displays in wonderful fullscreen, unlike the recent re-releases of DOOM 1 and 2 which are letterboxed, and looks absolutely gorgeous. Along with the usual quality of life improvements, such as a quick save, Nightdive have implemented FullScreen Anti-aliasing options, though to be honest, I couldn’t really tell the difference between having the three different types of anti-aliasing on or not. Nightdive has also opted to include the original game's password systems, which existed for those that didn’t have a memory card on the N64 and its hidden features menu which includes level selection and cheats. The game's simple, hidden “fun” levels – and by “fun” I mean designed by a sadist – can only be accessed through here.

The game runs incredibly smoothly and the only real major change from the N64 version seems to be that the game is brighter. The original release was quite dark. 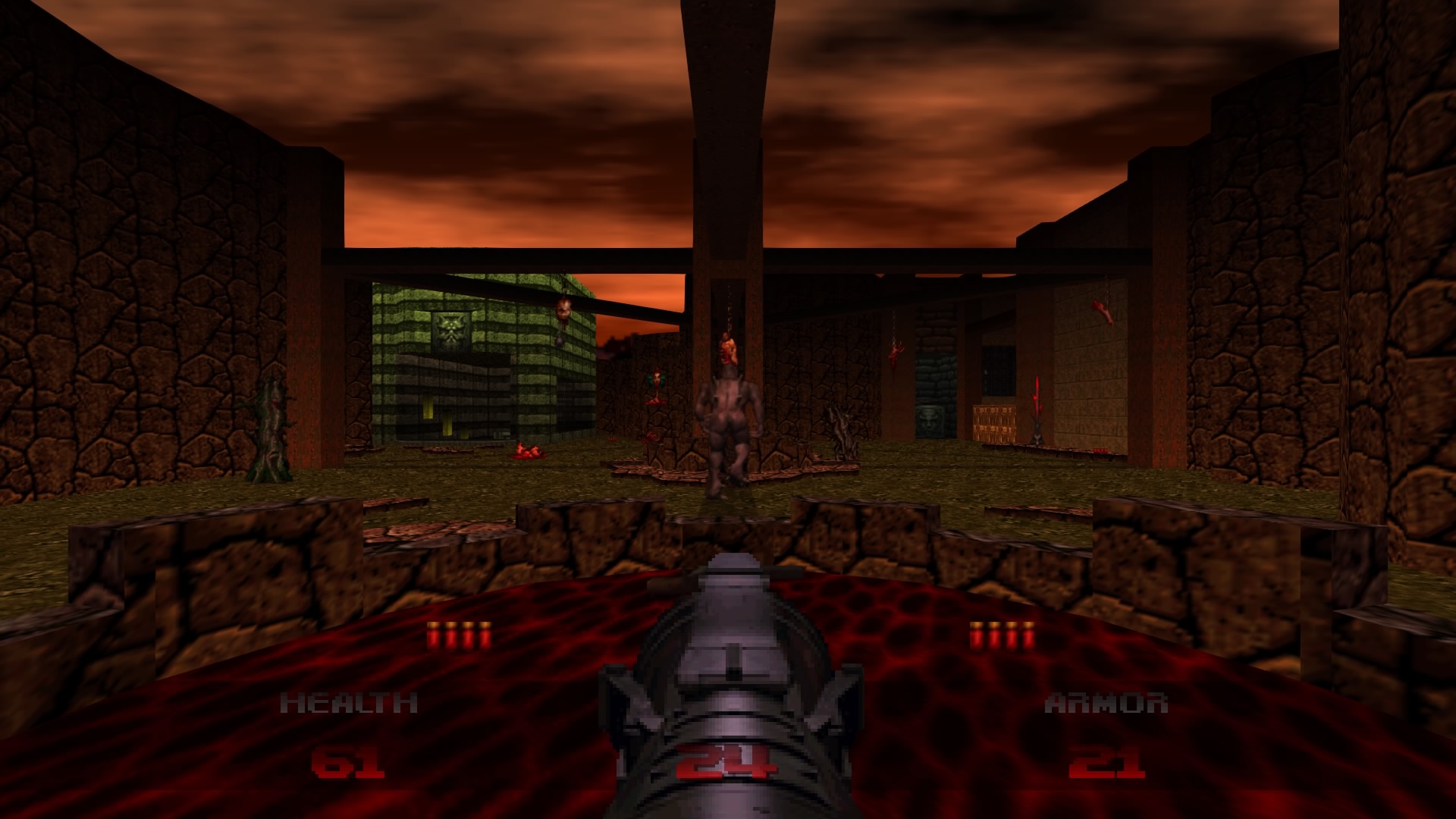 Nightdive have also proven with this remaster that they understand exactly what it is that makes DOOM 64 so great with the addition of a brand new episode, Lost Levels. The Lost Levels campaign is designed to link the classic DOOM games into DOOM (2016) and DOOM: Eternal, thus creating a cohesive mythology for the series. Lost Levels fits in perfectly with the main DOOM 64 game, feeling exactly as though they were designed at the same time as the original release.

As I stated earlier, DOOM 64 is the best DOOM game you’ve never played – and certainly my favourite in the series – that you now can. Do yourself the favour of picking this up and experiencing the cathartic joy of showing demons the error of their ways via the shooty end of the beauty that is the double-barreled shotgun. As an added bonus, with the re-releases of DOOM 1 to 3, now you can have the entire collection on one platform. What better way is there to celebrate 27 years of DOOM?

Errm, we only had to wait 23 years for everyone to be able to play it?

Lurch
If not for that subdued soundtrack, this would take top spot for me with ease. Level design and gunplay is great compared to the originals but they need to give us the option to mod in a custom soundtrack. 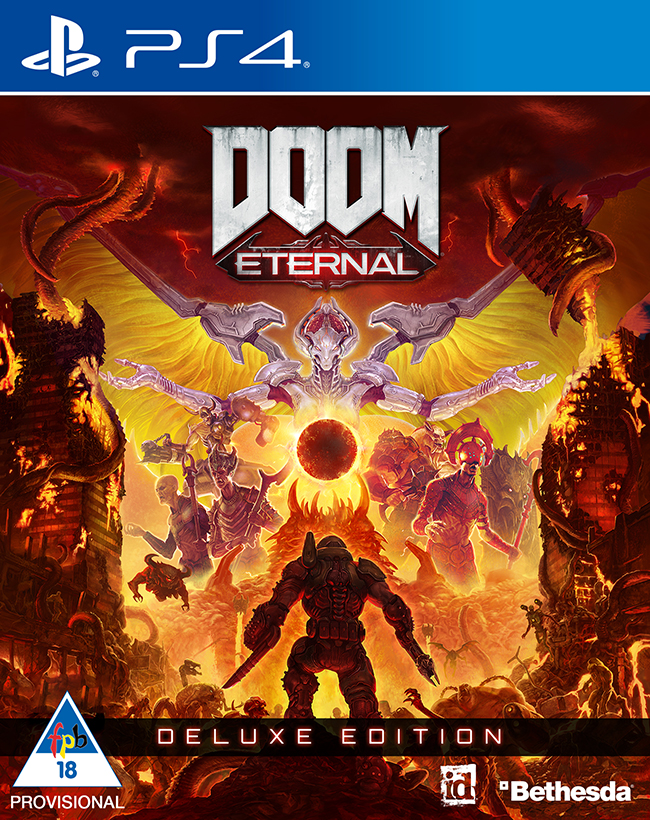