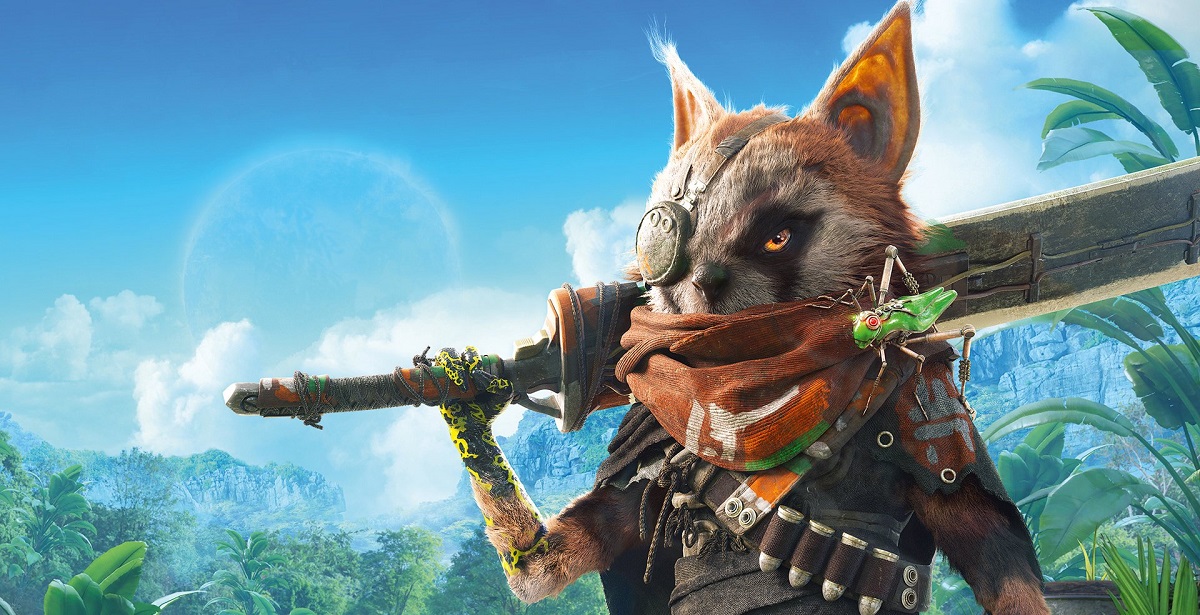 The more I play of Biomutant, the more I find myself invested in its world, characters, and the crafting-focussed gameplay loop. However, the best description for my dozen hours so far is probably “inconsistent”. Basic traversal, the combat mechanics, the storytelling, and the visuals, almost every element is a mix of good with a little bad. It’s better than the sum of its parts but also feels like the developers would have been better off polishing each element first, rather than expanding their scope.

Set in a seemingly lush and vibrant post-apocalyptic future, Biomutant plays out like a fable, with the backstory, key events, and even dialogue recounted by a single narrator. It’s a tale of environmental destruction, the end of humanity, and the species that rose in their wake. With parts of the world still scarred by pollution, and the world tree in peril, the new tribes are split between those wanting to cleanse the world by seeing it fall, or those that want to unite the tribes in an attempt to save it. Depending on your approach, the narrator and characters within the world will remain hopeful and encouraging, or become increasingly cynical and despondent. 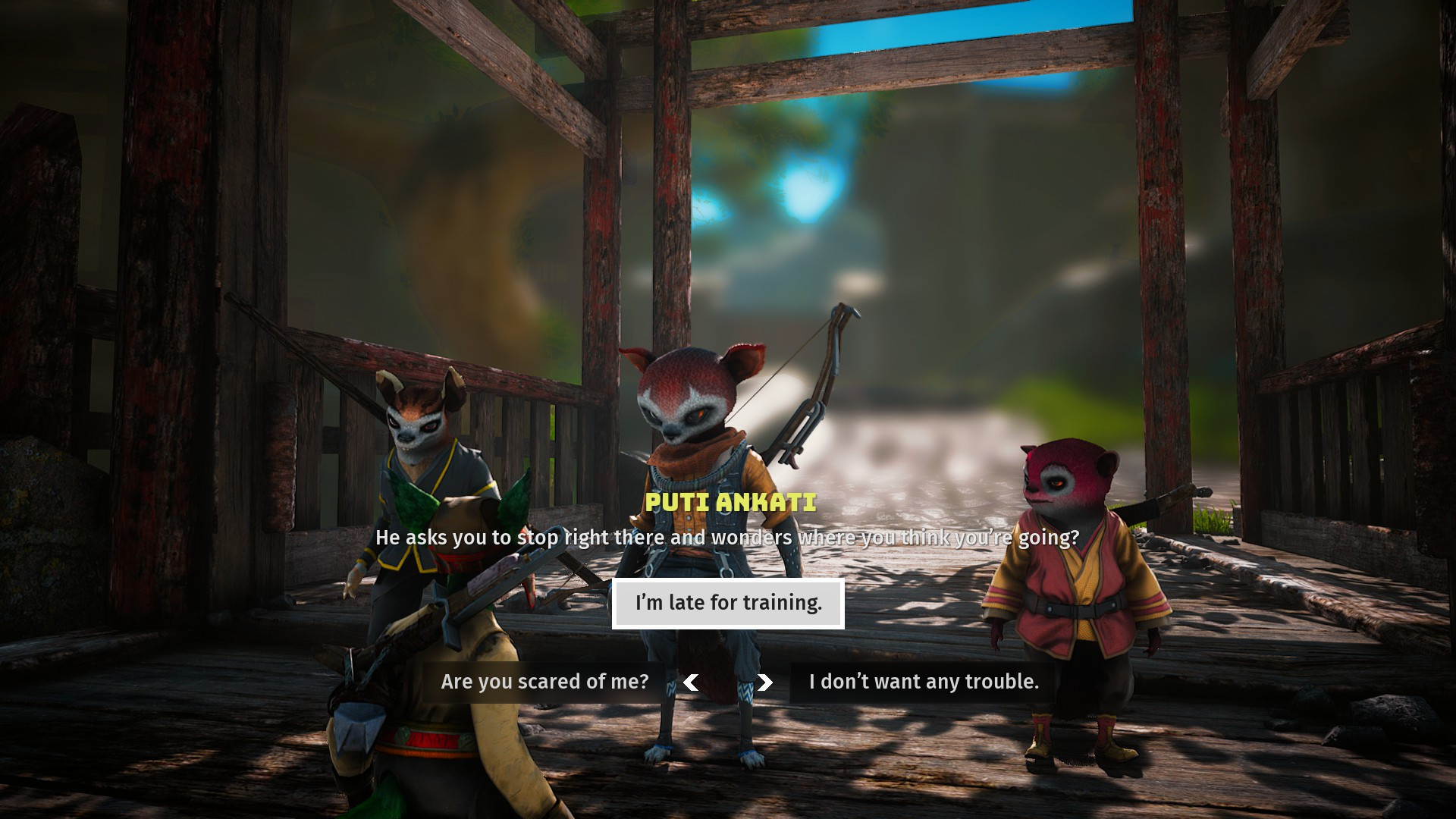 Despite a few mistakes, I was always impressed by the interactions between the dialogue and aura system, past and present.

Your heavily customisable protagonist – which will still look like a small, furry, bipedal mammal regardless – starts off having to tackle a visually bland, checklist-style tutorial. Thankfully, you soon emerge into the open-world world proper, and events pick up. The story effectively covers three time periods. There’s the distant past that you learn about through the narrator while exploring ruins. There are playable sequences from your protagonist’s youth, in which they first learned the tenets of “Wung-Fu” before a tragic attack on their village drove them away. Then there’s the bulk of the game played in the present, with the protagonist having returned to play a role in saving or cleansing the world.

Questing in Biomutant a mix of exploration, traversal, light puzzling, and combat. Most primary missions involve a unique area and mix of puzzles and boss fights. Unfortunately, too much of the open-world content boils down to bland missions that task you with rescuing prisoners, killing bandits, and liberating outposts. At least the Wung-Fu combat is an impressive free-flowing blend of acrobatics, melee, and ranged combat. There’s also a conventional RPG foundation that allows you to level attributes, choose perks, and unlock new Wung-Fu moves. Finally, there’s the extensive gear and crafting system, which felt like the most novel and fleshed-out mechanic. 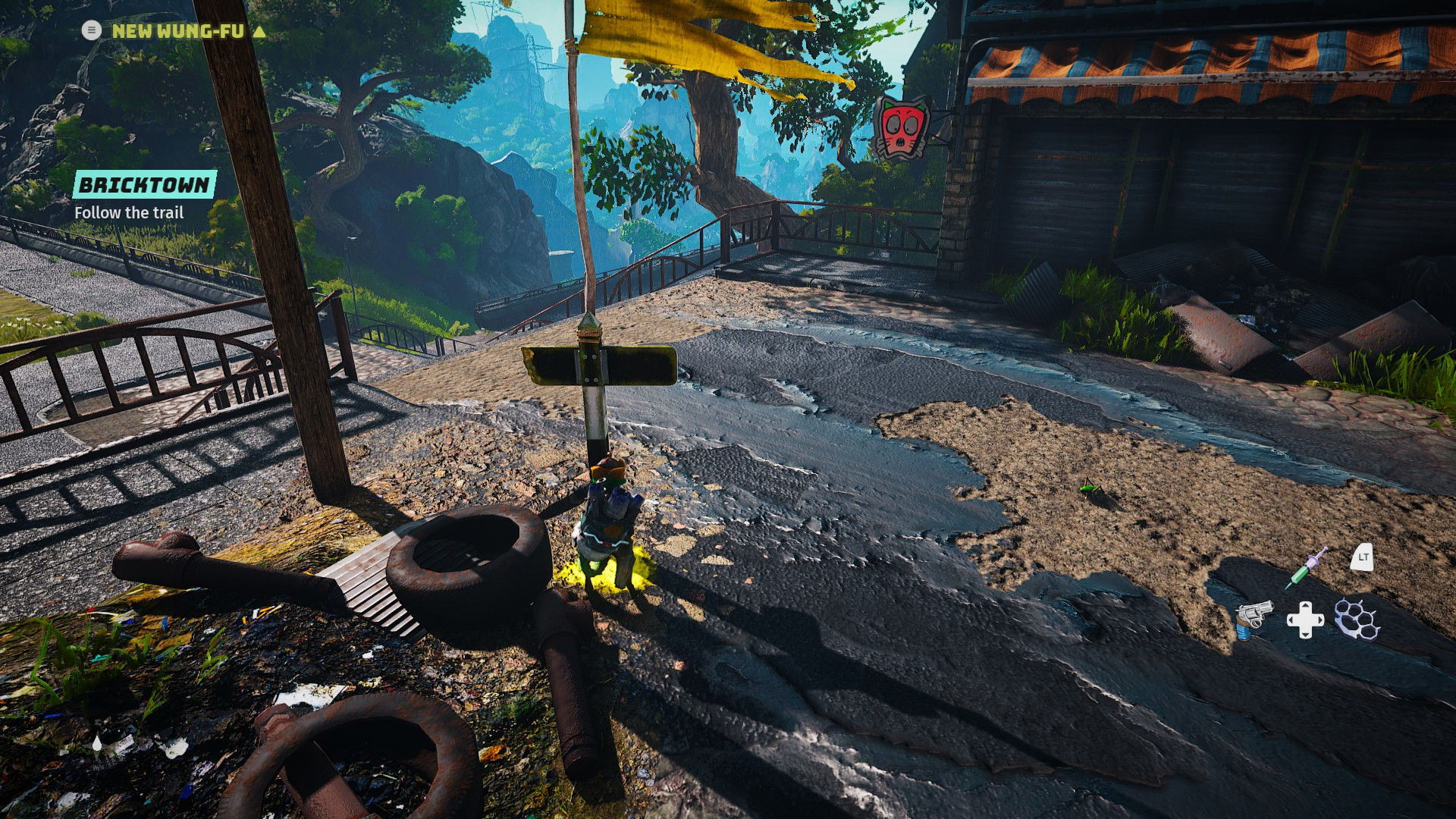 Peeing on signposts to open fast-travel options was entertaining at first. Later, it simply reminded me of how tired I was of the open-world structure.


Character interactions offer basic dialogue choices, and several decisions can affect mission outcomes and your aura – represented by competing light and dark spirits appealing to your nature. You can side with a clan that wants to save the world tree or side with those that want to destroy it. You can save or exploit fellow creatures in need that you rescue along the way.

These actions result in a surprisingly detailed conversation system, including references to conflicts between your past and present self, but it’s also a system that can go awry. Despite siding with a “light” clan and possessing a slightly light aura in both the past and present, I spent the first few hours being told by key characters that I was different as a child and they still see hope in me despite my actions.

Non-combat activities, like traversal and platforming feel fluid albeit floaty. Your character never feels truly grounded and is capable of some impressively jerky movement mid-sprint, in the air, or on a mount. Thankfully, there are only a few spots that require precision movement, and traversing the world – especially on a mount or boat – looks impressive. Some locations simply require the right tools to open, while devices are often activated through simple rotation and switch puzzles that rely on a move limit to add challenge. 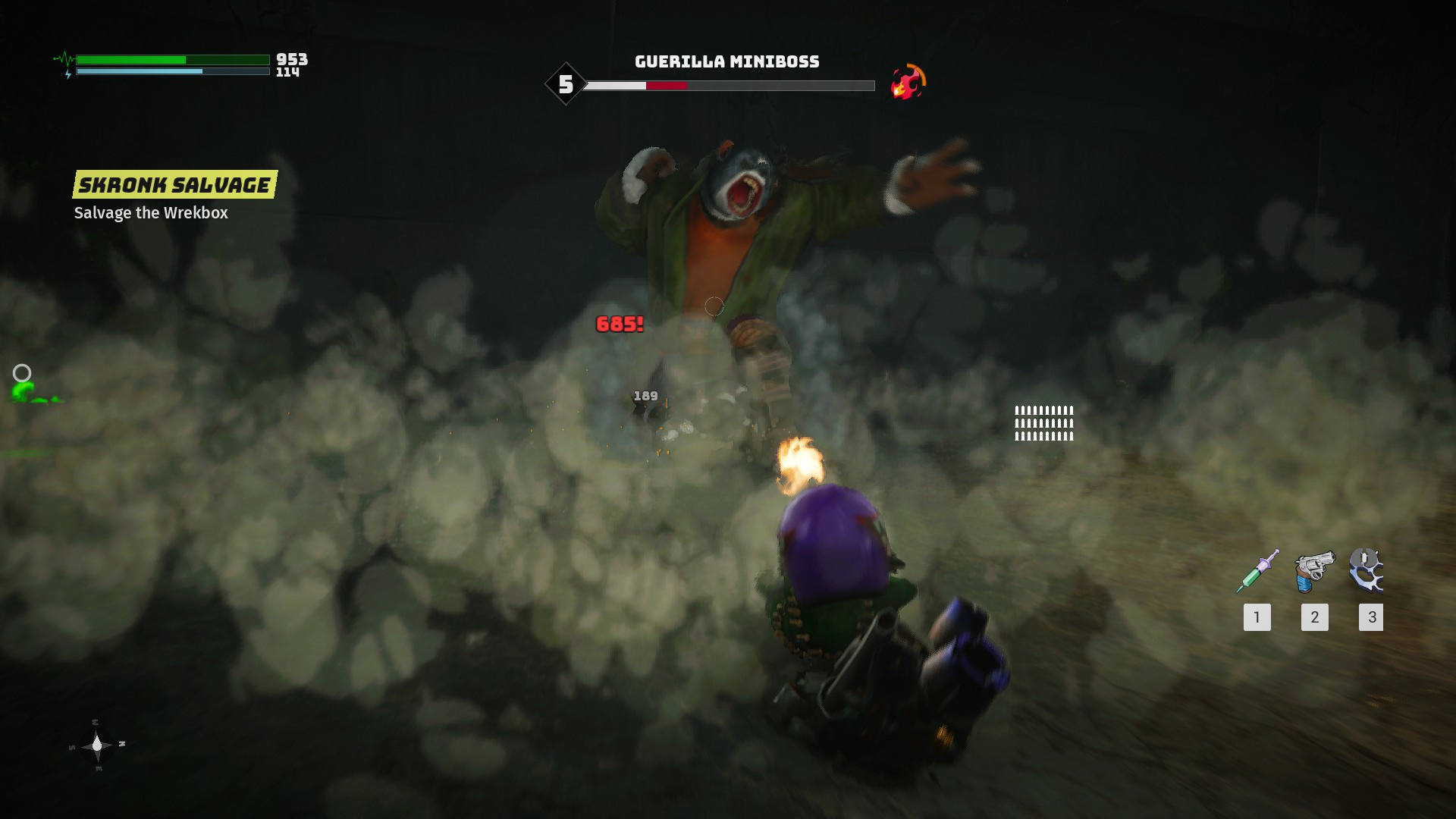 Battles certainly look stylish, with particle effects, moments of dramatic slow-down, and comic-style descriptive text. However, dodging attacks and pulling off a stylish combo, only to realise you’ve inflicted a sliver of damage, is unsatisfying.

Combat, one of the most marketed aspects of the game, gets better over time but still has several flaws. No matter your starting attributes, the protagonist is a nimble creature and group combat revolves around dashing in and out of attack range, ideally finding space to trigger a combo attack. The fluidity of this system – which seamlessly blends melee strikes, dashes, backflips, ground slams, sliding firearm attacks, and everything between – is a sight to behold (though a dedicated lock-on function wouldn’t go amiss).

It’s just unfortunate that Biomutant demands several hours of levelling, gear drops, and crafting before you begin to feel remotely powerful. Even then, the combat rarely feels impactful, no matter how many comic-style visual flourishes the game throws in. Once you begin to master the basic combinations rather than messy button mashing, combat both looks more skillful and enemies fall quicker. However, at the 12-hour mark, having selected the normal difficulty for review, it still often feels like I’m peppering enemies with a pea-shooter and bludgeoning them with a feather. 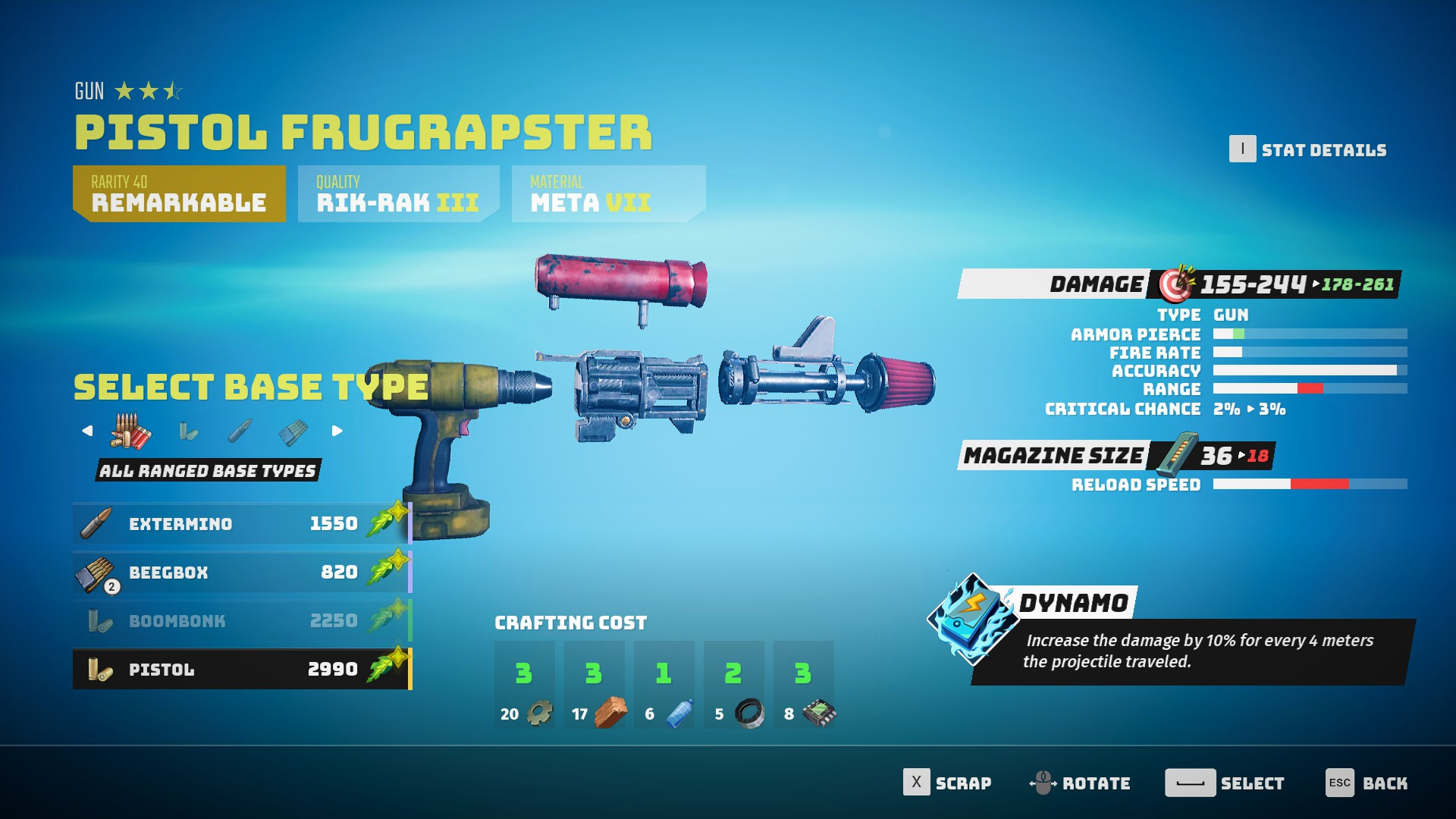 Finding high-level gear is exciting but crafting your own is far more satisfying.

What has remained engaging from the get-go is the character level-up and crafting systems. Every level – and a few in-game actions – rewards you with a stat boost and points to spend on perks, elemental resistances, and psi-powers (which are restricted based on your alignment). Given the world still has several hazardous areas, high elemental resistance and protective gear are essential to progress at times. Thankfully, Biomutant throws gear at you regularly, seemingly irrespective of player level, so my inventory is full of items ranging from level-1 through 25, always giving me something new to equip when gaining a level.

Now, while there is pleasure in equipping a snazzy new blade or hat, it’s far more interesting to break down these items into components and use salvaged materials to craft even snazzier versions. Every weapon can be modified around a basic frame, while each piece of armour supports several mods. Components of varying rarity and a myriad of additional effects will keep invested in optimising your loadout. With the ability to save several outfits, you can craft armour resistant to specific elements or mix up your weapon pairing based on the type of creatures you’re battling. 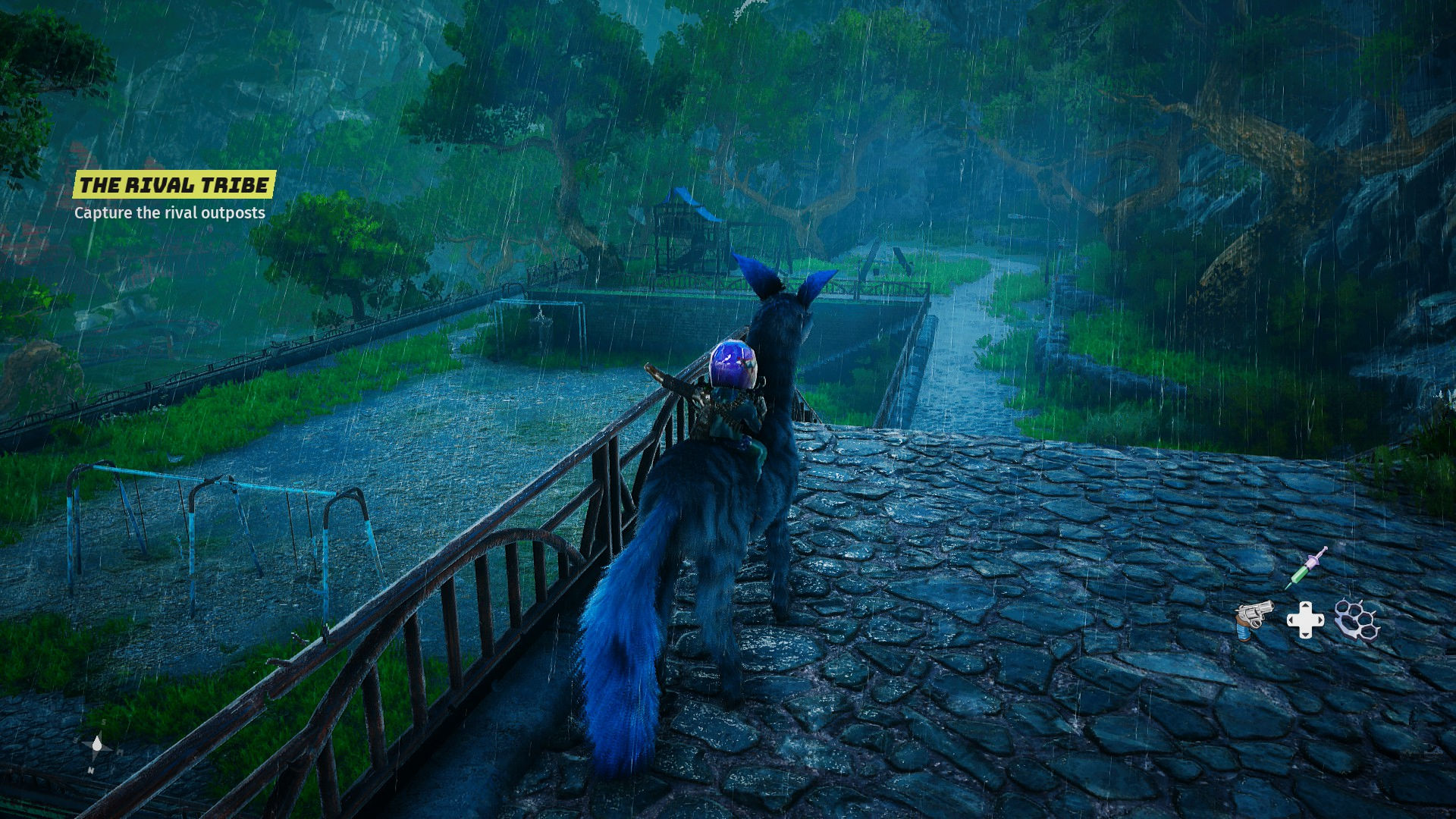 There are times the visuals and audio really come together to generate a strangely serene atmosphere.

The last thing to touch on is the presentation, and this too is a mixed bag. The PC options are extensive, giving you a range of visual settings, including dynamic-resolution and framerate targets, that can provide an Xbox One-esque experience up to a 4K/60 presentation that’ll surpass the Xbox Series X and PlayStation 5.

The world can look beautiful and calm during exploration, with a relatively serene soundtrack and the limited number of combat encounters reinforcing this sensation. However, once you look past the detailed character models, fur shaders, dynamic foliage, and lighting, you’ll find an environment built with low-geometry models and low-resolution textures. That said, the visuals hold up more often than not, it's just that some areas look notably rougher than others.

Overall, my first impressions are mixed but positive. Biomutant is a mid-tier game from a fresh development team, and while it lacks the cohesiveness and polish of a “AAA” title, it still makes for a fun experience - most of the time. Some of the flaws are structural, others can be rectified in patches, but it does more right than wrong. It’s just a shame the open-world busywork that dominates the experience ends dilutes other gameplay elements (though fans of that world structure can take it as a positive).