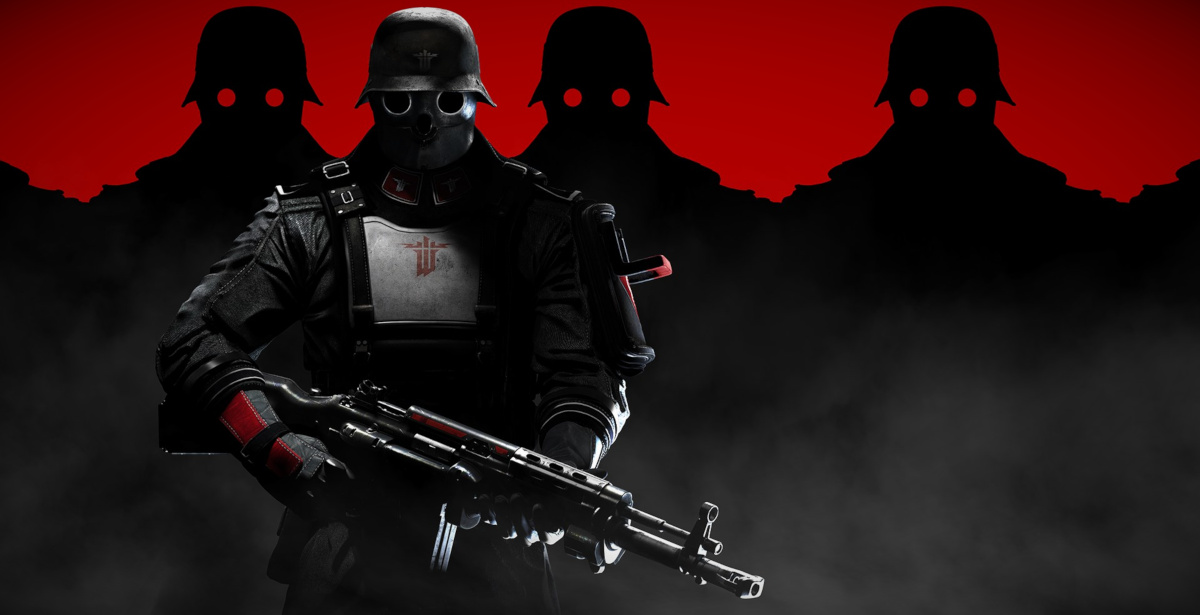 Beating the Backlog is the feature we've dedicated to highlighting the games we've had lingering in our libraries for ages, and never got around to reviewing timeously or discussing at launch. It's a great opportunity to highlight an IP that's about to get sequel, discuss the origins of an upcoming remake/remaster, or simply praise a game we regret ignoring for so long.

With MachineGames’ coop-focused Wolfenstein: Youngblood spin-off arriving to mixed reviews a month ago, I thought it was a good time to go back and cover the first games in their pseudo-reboots - which released before the Nexus got off the ground, and deserve way more recognition.

Wolfenstein: The New Order was an unexpected surprise in 2014, arriving five years after the well-received, underperforming, and often forgotten Wolfenstein 2009. Developed by a brand-new team, MachineGames reimagined BJ Blazkowicz as a far more complex character than his prior incarnations; developed some extensive lore for their new Wolfenstein universe (while keeping the events of past games pseudo-canon or deliberately vague); used an early game event to turn the world on its head; introduced a heavy narrative component, with likeable and sympathetic companions; yet still managed to keep the fast-paced gunplay and bloody Nazi-killing the series was renowned for. 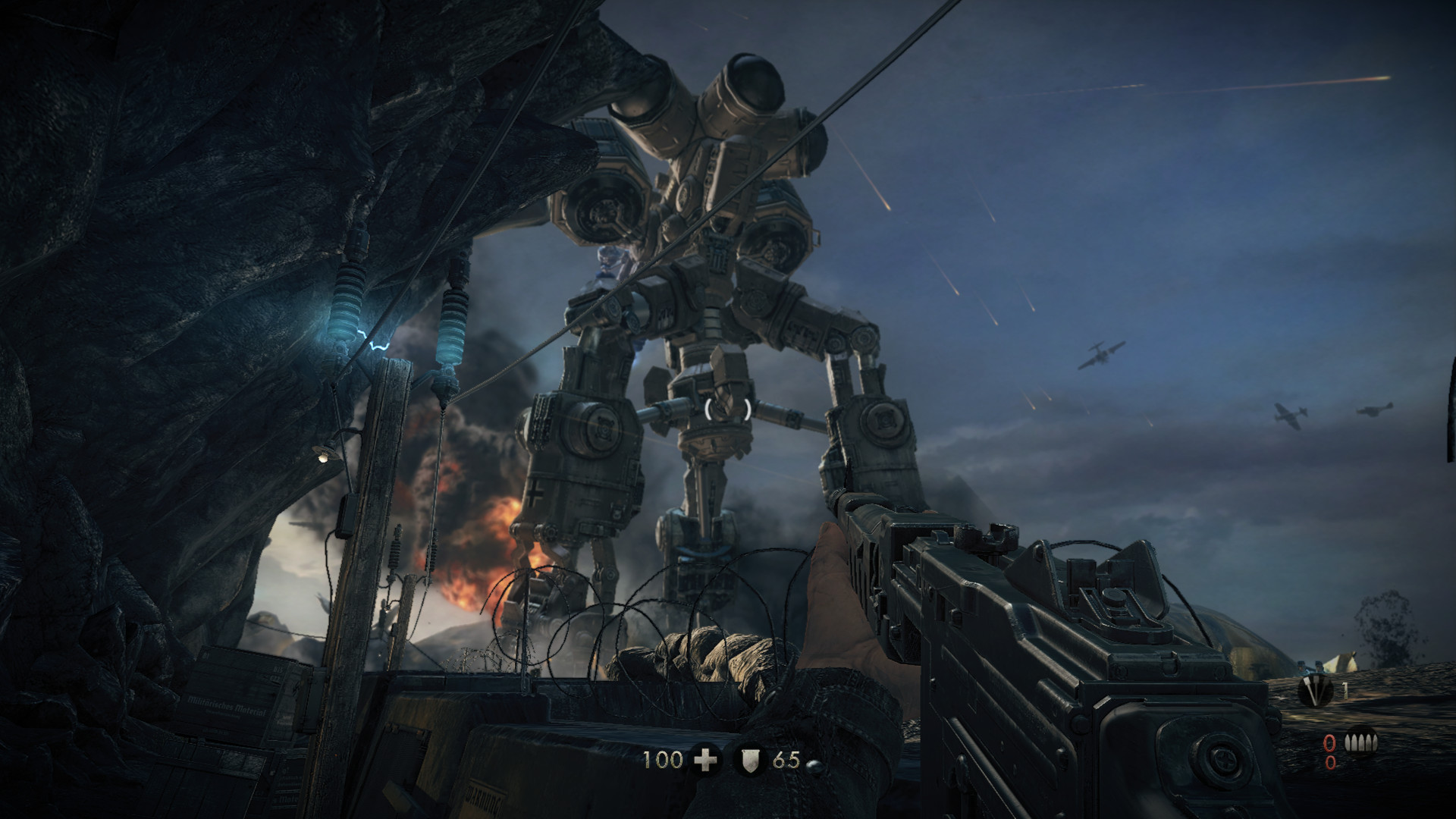 The New Order's take on a beach landing doesn't pan out well for the Allies.

After a lengthy tutorial that is framed as a disastrous Allied assault on the General Deathhead’s compound, used for exposition and characterisation, BJ gets to make a big choice (though, in reality, it only slightly alters the game going forward), then takes some shrapnel to the skull and spends the next 14 years out of the fight. In the interim, the Nazis go on to use their inexplicably advanced technology to dominate most of the world. Gaining back his motor functions, just as the Nazis begin to purge the asylum that has kept him safe and healthy for years, BJ kicks back into action by jamming a scalpel into a Nazis neck. It's satisfying, bloody, and makes no damn sense. How has he maintained any degree of muscle tone after 14 years?!

Dubious video game logic aside, you swiftly find yourself stealth-stabbing and gunning down hordes of Nazis and their annoying, reinforcement-summoning commanders, with a selection of new retro-futuristic weapons. You meet your future love interest, travel to Berlin, free resistance members from a prison, rescue a scientist who explains away all the Nazis technological advancements, before setting in motion a plan that’ll get you back to Deathhead’s compound to end the war. Along the way, you’ll raid a Nazi Submarine, destroy a bridge spanning the Strait of Gibraltar, rampage through a Nazi moon base, and partake in several boss battles. 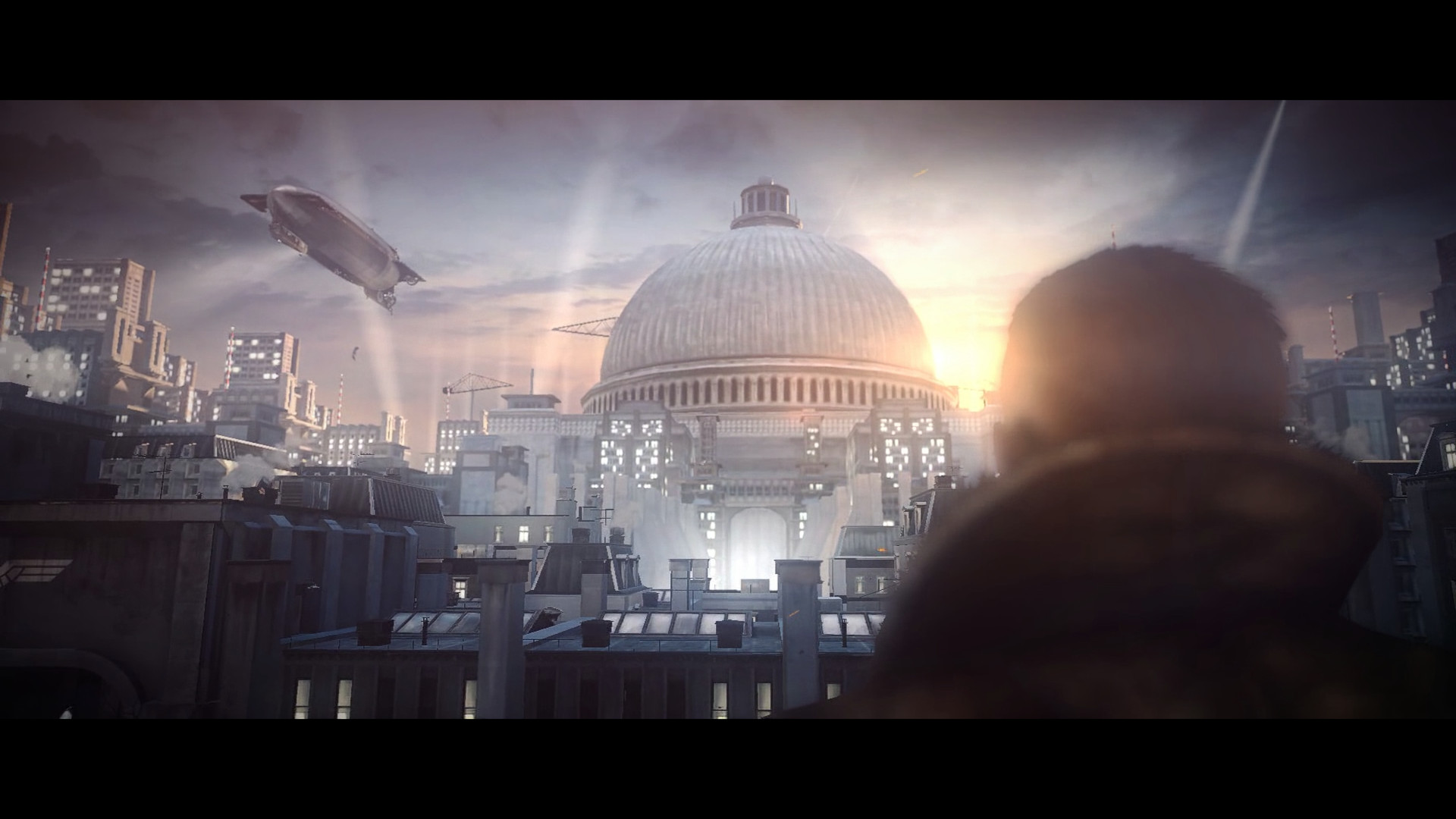 The Nazi's reliance on massive concrete structures doesn't make for the most exciting architecture but The New Order still has some fantastic, atmospheric locations and well-directed cutscenes.


Although often totally-inconsistent, Wolfenstein The New Order always keeps you engaged, either through plot and character development, or new gameplay scenarios. One moment, you’re smuggling yourself into a labour camp (i.e. concentration camp) and watching the brutal treatment of prisoners; 30 minutes later, you’re tearing through the same camp on the back or a rocket- and machine gun-toting mech. One moment, you’re doing a violent James Bond impression, infiltrating a moon base; the next, you’re watching the death of a repentant Nazi in front of his distressed surrogate child. But these inconsistencies are often used to great effect, with BJ celebrating the power of American nationalism, before being reminded that white Americans looked a hell of a lot like the Nazis to ethnic minorities before the war. The story always feels well-told, whether in sad or empowering moments, and its clear MachineGames put a lot of effort into the writing and performances (and they’ve never touted that “our game isn’t political” [censored]).

Of course, if you’re only here for the Nazi-killing, you won’t leave disappointed. Wolfenstein: The New Order often shakes up the run-and-gun gameplay formula with some mandatory stealth segments and light traversal puzzles (typically using the LazerKraftWerk for cutting through barriers as well as Nazi limbs), but the bulk of the action takes place in well-crafted combat arenas, full of weapons, health and armour pickups, designed to keep you moving as you cull increasing numbers (and variants) of Nazi soldiers, supersoldaten, and other mechanised foes. Player movement allows you to sprint, jump, and slide about - never letting go of the trigger. There’s a cover system in place I often forgot about, but it’s useful for stealth and dealing with heavily armoured foes on higher difficulties. 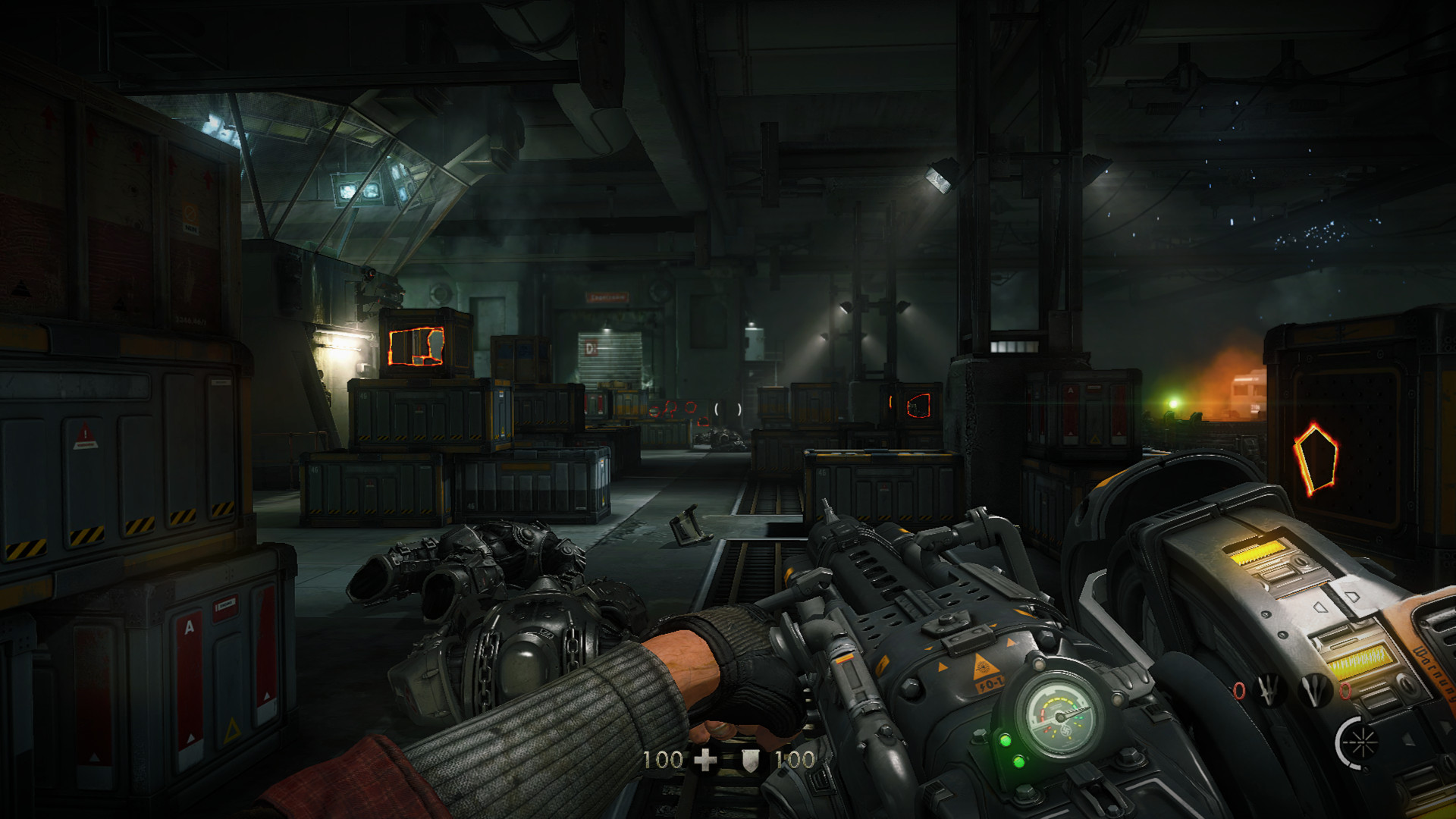 The New Order excels at providing fast, fluid, and violent skirmishes. Every location is littered with dead Nazis, viscera, and bullet holes by the time BJ is done.

Dual-wielding is strongly encouraged (dual-shotguns, with ricochet rounds, in tight quarters = win) and creative Nazi-killing ties directly into the perk system; a skill-tree that offers up mini challenges that, upon completion, reward the player with a new skill or passive buffs. Stealth kill commanders to reveal map secrets, get kills from cover to increase magazine sizes, rack up dual-wield kills and reload both guns faster - the progression system rewards skill and creativity (and are tied to achievements/trophies if that is your thing).

Unfortunately, there is one aspect of Wolfenstein: The New Order that is not perfect. The smooth 60fps shooting, classic level design, enemy encounters, and well-developed narrative all get top marks, however, the difficulty curve is uneven. Given that you have the option to approach battles using stealth, first wiping unit commanders to avoid reinforcements, and then the option to keep mobile, ducking into cover to scavenge health, armour, and ammunition, the difficulty tiers feel fair 90% of the time... right up until the point you’re confined to a small arena with a boss. The bulk of these encounters limit you to trading blows while simultaneously trying to grab every pick up in the immediate area, hoping you’ve hoarded enough powerful ammunition to cheese to encounter. Some require precision shooting and pattern recognition, but others - most notably the final boss - are painfully designed, and on higher difficulties, stopping to grab pick-ups mid-battle is more dangerous than just slugging it out. 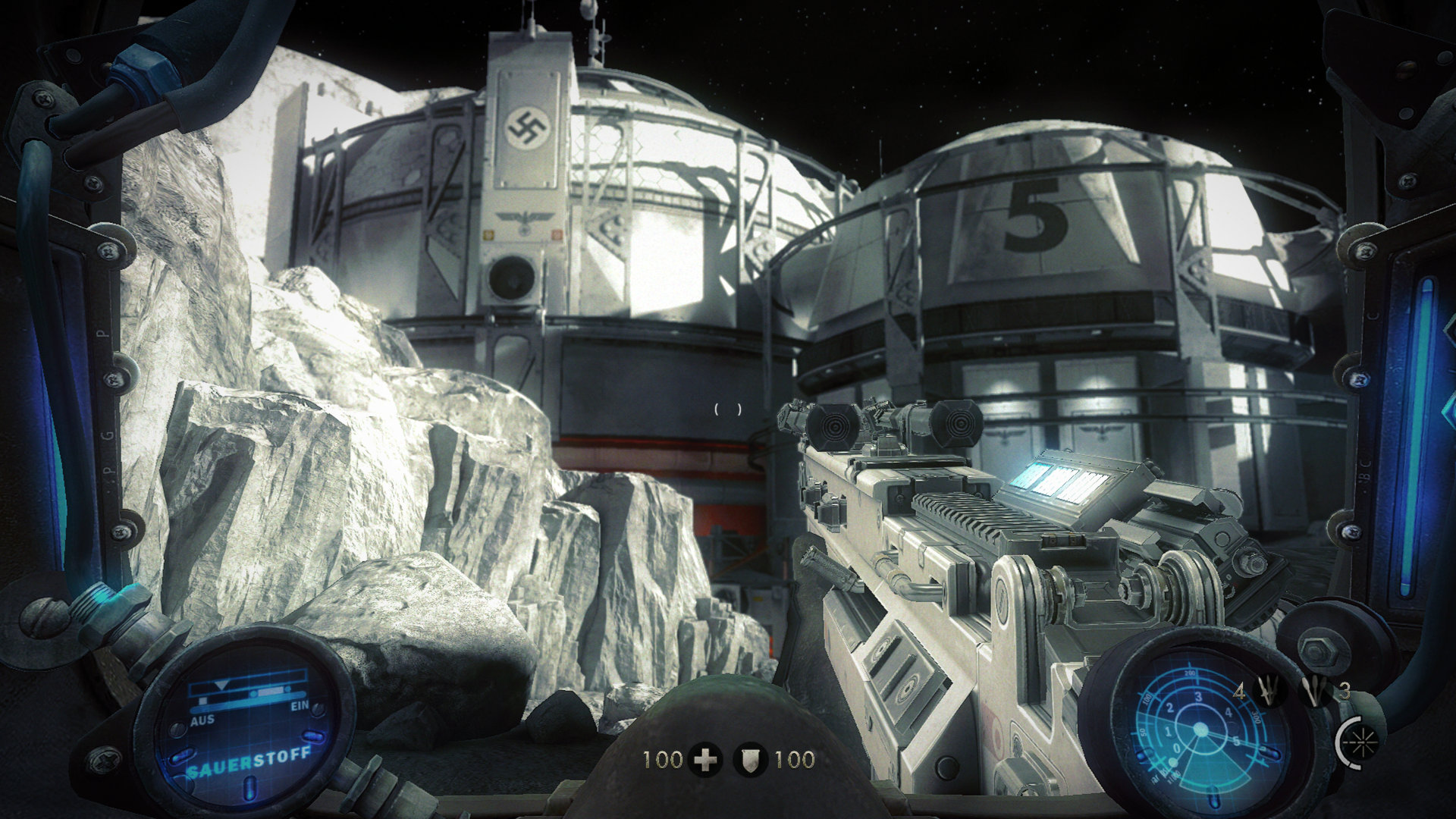 There are few things more satisfying than blasting Nazis with laser weapons on the mother-[censored] moon!

If you’re going back to Wolfenstein: The New Order in 2019, the visuals still hold up well, thanks primarily to the excellent environment and enemy design, more so than technical prowess. The id Tech 5 engine never ended up being used for many titles, but it still runs at a near-perfect 1080p/60 on the current-gen consoles, sporting some great looking scenes that rely on a mix of dynamic and “pre-baked” lighting. As a result, certain areas can appear “flat”, for a lack of a better word, but the excellent sound effects, music (including some Nazi-fied classics from the 60s), voice acting, and cinematics impress throughout. It doesn’t quite hold up against The New Colossus and Wolfenstein: Youngblood when it comes to flashy post-processing effects, but it still looks sharp and plays great.

Overall, Wolfenstein: The New Order gets an easy recommendation for FPS fans (even more so if you like older titles) and is a must-play for those who love narrative-driven campaigns. It’s loud, violent, and loads of fun, but also manages to make you stop and think at times; a far cry from the chest-thumping, shoot-first-think-never [censored] that dominated other military shooter campaigns for the last decade.

You can follow the link to find more games we finally got around to playing and discussing - slowly but surely "Beating the Backlog".