Going Back to Move Forward 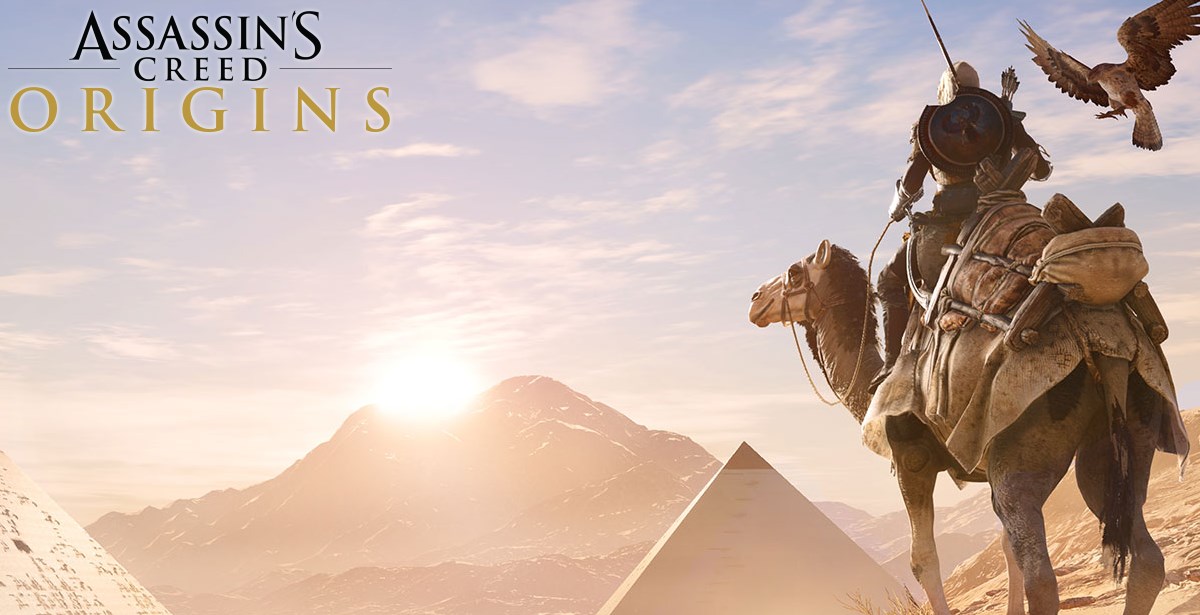 Assassin’s Creed as a series has seen its fair share of hits and misses. The first is seen as a good start, with hints of the potential that fans have come to expect. The pinnacle of the series, for many fans, is Assassin’s Creed II and Brotherhood. Ezio is the most likable and beloved of the series' protagonists and has yet to be matched.

After the backlash that Unity received, and despite the general good reception to Syndicate, Ubisoft decided to take two years off from the annual release cycle grind and “reboot” the series. This has definitely benefited the game, as technically it shows what the current-gen can accomplish, though there is the feeling that more would be possible still.

Graphically Assassin's Creed Origins is the most beautiful of any AC game I have ever played. Desert sands shift beneath your feet as you run, while the sand billows as your mount races from checkpoint to checkpoint. Bayek’s robes flow convincingly and often billow as the wind changes direction. These little details show that the Ubisoft Montreal team have spent time convincingly modelling some of the smallest aspects of the game. The only slight criticism is that there are still clipping issues in the game. Much like Horizon Zero Dawn when Bayek moves through low lying vegetation the fronds do not move to accommodate him, rather he just phases through them. I even saw a couple of instances when trying to mount my horse where Bayek basically just disappeared for a split second instead of moving aside. The clipping is minor and does not result in any exploits that I could take advantage of so is not game breaking, just jarring. 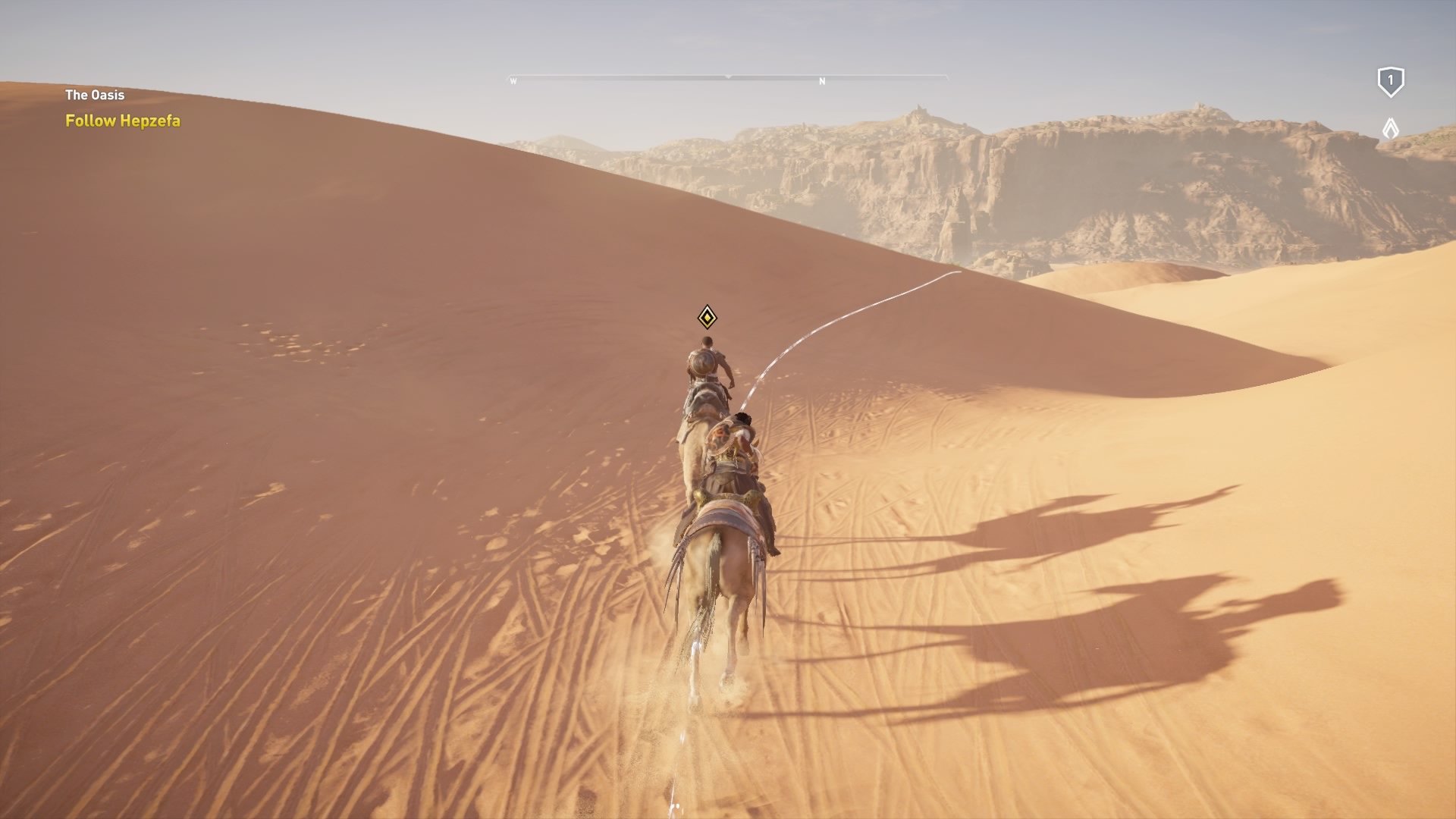 Bayek is, as is customary, exceptionally agile. He glides through crowds, sometimes knocking people over, with ease and climbing even the tallest cliff faces without issue. The parkour is, thankfully, greatly improved as for most of the time Bayek moved where I wanted him to instead of aimlessly leaping off buildings to his doom. Incidentally, it appears as though the parkour mechanic that was introduced in Unity seems to have been simplified to just a simple press of the circle button as Bayek automatically finds the handholds required. While easier, it takes away some of the thrill and control of leaping around that you had in the last two games.

The biggest and most welcome improvement is combat. While obviously aiming for a Dark Souls-esque block, circle, roll and strike mechanic, it is more akin to the Witcher 3’s combat. It isn’t difficult as opponents telegraph their actions giving you time to react. The only criticism is that when you are facing off against a group of enemies, battle can devolve into a frantic mess. Combat can still end up being a mash right bumper or trigger fest against low level enemies or grunts. Use that against a Captain or higher level enemy or a boss and you will die. Despite these minor issues, combat is greatly improved and much more entertaining, so much so that my usual tactic of using poison and berserk skills to thin the numbers has fallen by the wayside, I WANT to get into a fight now. 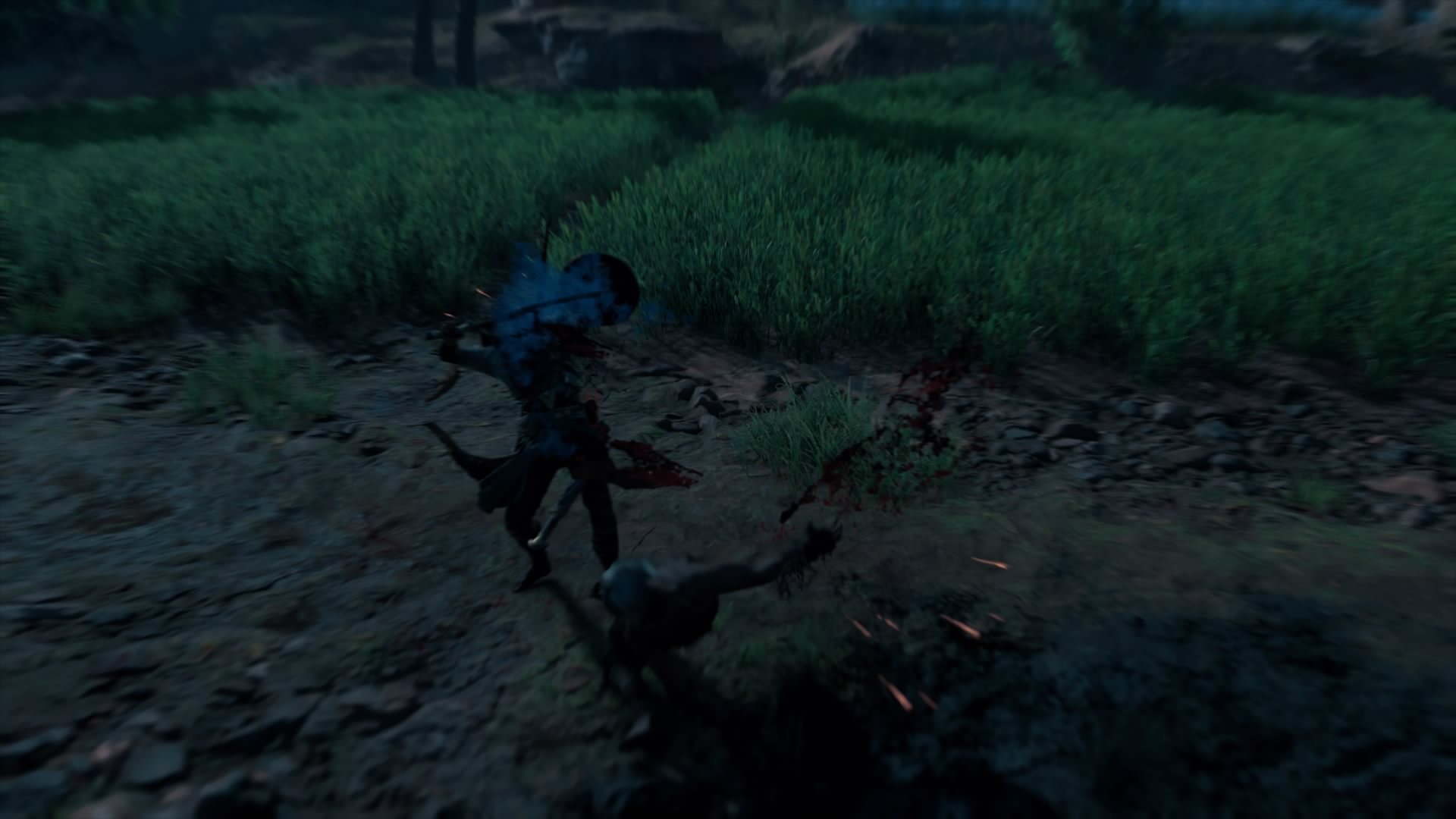 The game does not eschew stealth, as I still found great satisfaction in sneaking into an enemy base and slowly picking off the guards to finally get to my target. This is after all an assassination game, where Rambo-ing through just doesn’t fit. To do this effectively, your eagle Senu is crucial. Like the drone in Ghost Recon: Wildlands, Senu will mark targets for you - especially as you don’t have Eagle Vision from the previous games. As an added bonus, upgrading the Harass Skill allows Senu to assist in combat to give you a breather or to distract a guard so you can sneak past.

The Witcher comparison is seemingly apt, as Ubisoft was clearly inspired by CDProjekt Red’s magnum opus. When riding your mount hold X to have it auto-navigate along the roads. In addition the game is now effectively an action RPG. There are multiple side quests for you to do to raise your level to gain XP and skill points. Use these to buy skills along a fairly simple, yet intricate skill tree. Skills range from passive skills like faster health regeneration to more active ones like being able to kill two opponents using stealth. The tree setup is just right in that it keeps you progressing, for example to buy that particular skill you have to infiltrate a mansion and I found myself debating the merits of one over the other given what I knew was immediately ahead of me. 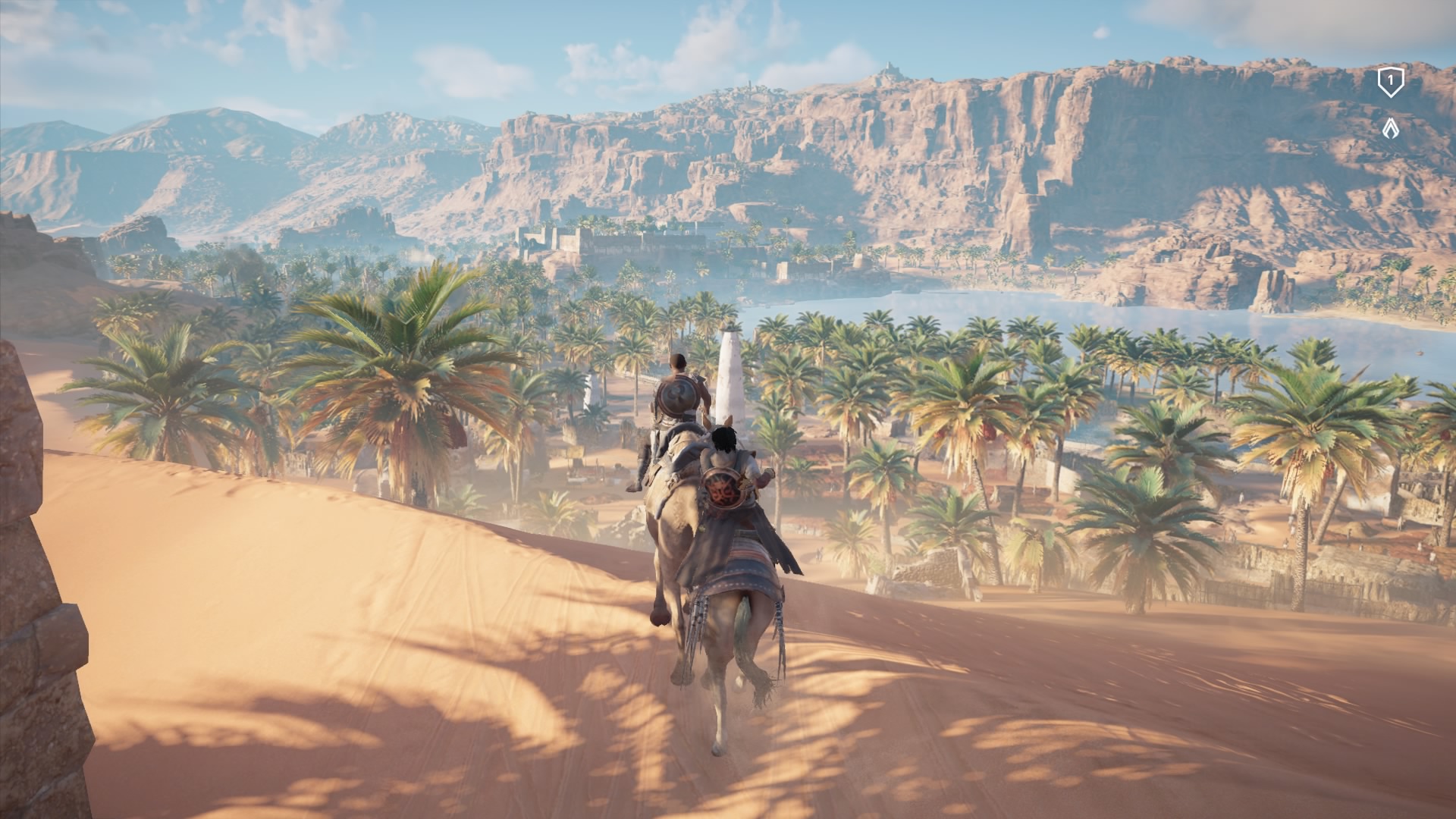 The side quests are important too, but only to pick up XP. The quests range from interesting such as rescuing a poet under a death sentence to FedEx type quests of finding some or other item that was stolen. None have the moral ambiguity and late game consequences of The Witcher’s side quests.

Side quests are just one of the insane number of things to do that will sidetrack you. There are tombs to raid. Each more complex than the next with puzzles to solve. There are Stone Circles to find that have a simple astrological puzzle attached to it. Solve all of these, raid all the tombs and collect enough materials and you can be rewarded with… a fancy outfit. I haven’t completed this yet as it takes a long time, but all it is, is a skin that adds nothing to the game or your character.

Taking inspiration from Shadow of Mordor you can avenge your fellow players' deaths by accepting vengeance missions. When someone dies (online), you can find their killers and take them out. It’s a nice and quick way to earn some XP, but without that wonderful Nemesis system, the missions aren’t that interesting. 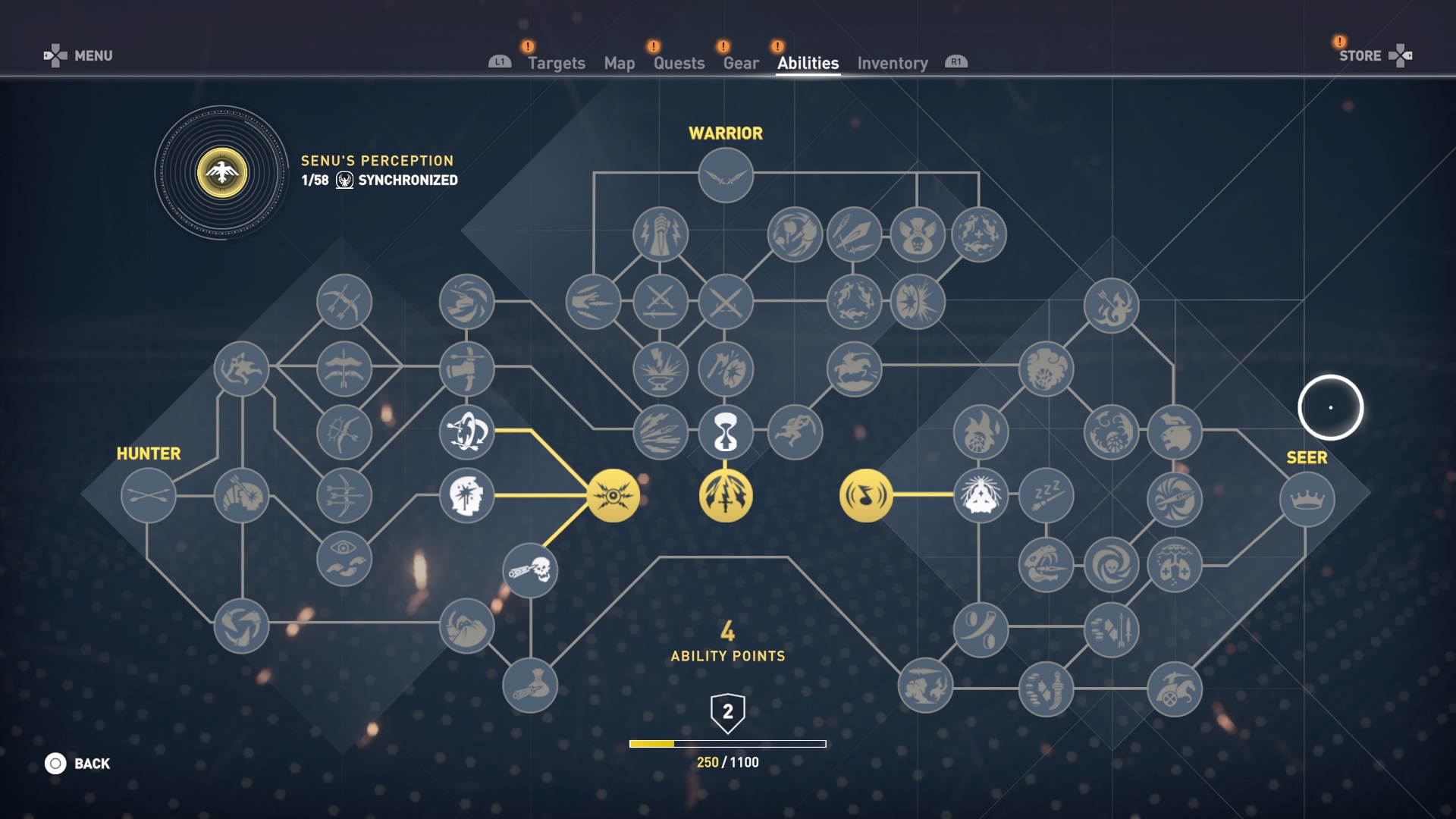 The whole point of these side activities is to gain XP and loot. AC: Origins is, like many recent games, a loot based game. Every mission you complete will reward you with Common, Rare or Legendary items. This changes things up nicely as you don’t just collect the usual weapons as per the prior games. However this loot system ensures that you never care about anything you pick up and you have no incentive to buy anything as you will always get something better in a few minutes. Legendary items drop at your current level, so as you level up you have to find better Legendaries or spend a stupid amount of money, gained from selling Rare’s and looting everything in sight.

AC: Origins' story details the very start of the Assassin's Creed Brotherhood. Unfortunately it does so via an extremely clichéd story. Once again your character is set on the path of vengeance as a loved one is murdered. Bayek is basically an ancient Egyptian policeman so why not have him investigate a series of unconnected crimes that leads him to the deeper conspiracy? Ubisoft had a wonderful opportunity, afforded by the setting and the time they took, to craft something new and I cannot help but feel that they missed that opportunity.

While the story is clichéd, as is Bayek’s motivation, we do get a charismatic lead. He almost approaches Ezio levels in my ranking of AC characters. He is funny, noble, honourable and cares deeply for his wife, and his people. Aya is a fierce woman, as capable as Bayek. When you first meet her, she is in hiding as she killed a powerful man tied to the conspiracy. Unlike Ezio’s mother and sister, she will take up arms, but she is also the scholar of the two, working at the Great Library of Alexandria to uncover more information. The side characters are similarly well rounded, everyone has an agenda, be they foe or ally. 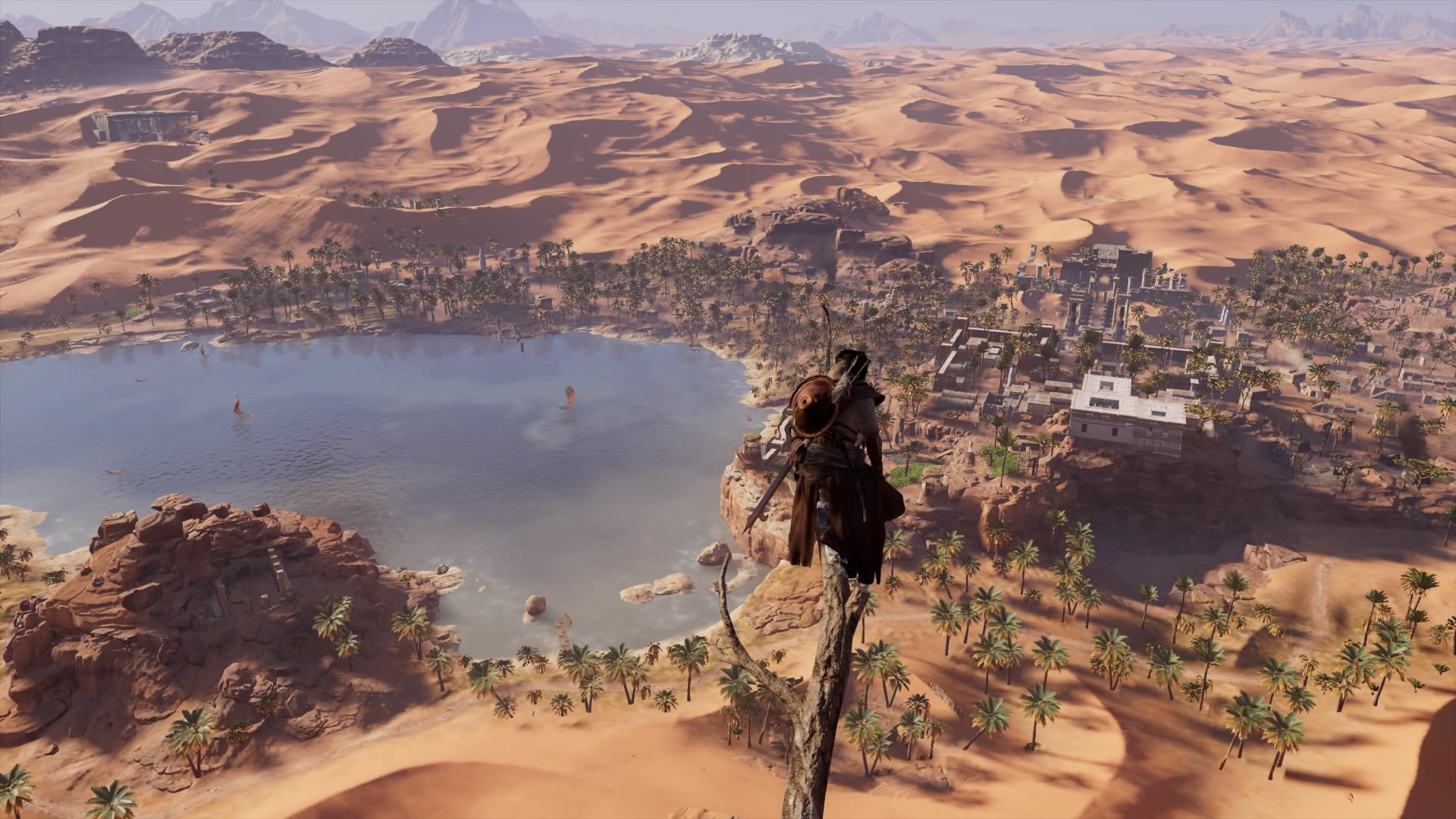 While in Syndicate both Evie and Jacob had a similar number of main missions to complete and you could choose to wander the world the rest of the time as either - Aya is only playable for certain missions, thus making this game about Bayek and his vengeance. While the team have admirably crafted a world full of and playable characters of colour, they have done a disservice by limiting your play time as Aya.

At the end of the day, AC:Origins is an intriguing game. The extra time has allowed the developers to sort out some technical issues that have plagued the series while also adding in improvements. The story, however, is nothing new or fresh, and the structure has not evolved beyond the now familiar Ubisoft open-world recipe. Hopefully the success of this game does not stall any further introspection and development as there is still some fat that an expertly wielded scalpel can cut away.

Ancient Egypt is an interesting setting

Bayek is a great lead

Aya only playable for certian missions

Lurch
Ha, I like Ezio as a protagonist in AC2 or Revelations if considered in isolation. My issue is his erratic personality between AC2, Brotherhood and Revelations - specifically his angsty whining in Brotherhood.

Scottie
"Ezio is the most likable and beloved of the series' protagonists and has yet to be matched." not according to the Nexus contrarian whose name shall remain unspoken. 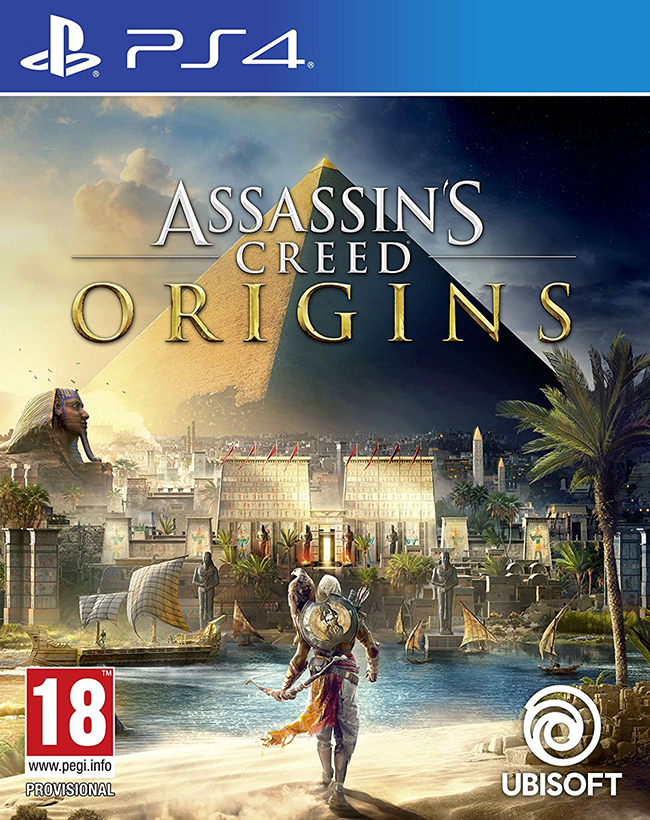