The colours are so bright I've gotta wear shades. 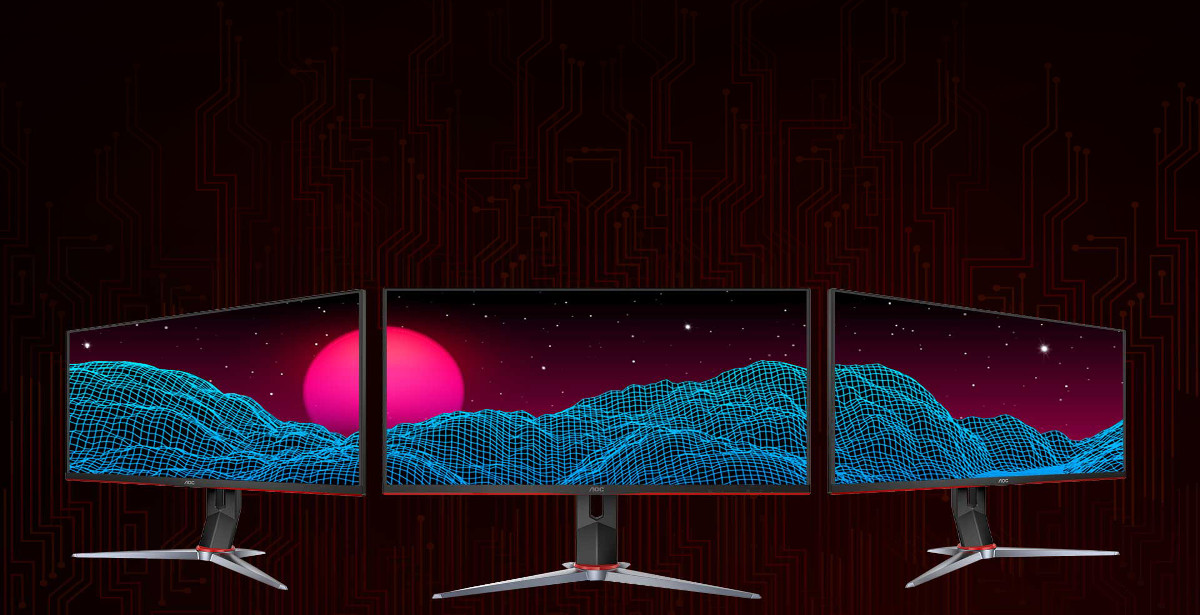 AOC have been in the monitor game for a few years now and have steadily climbed up everyone’s list of manufacturers to consider as they refine and tune their products. A couple of years ago, I managed to pick up a 27” G-Sync model that changed my world when I realised that refresh rates, particularly high ones, do actually make a visual and gameplay difference, and I have been on the lookout for a second monitor from AOC for some time. This model, despite the small panel size, just might be it.

So, what does that all mean really? Well, the first thing you'll notice is that the monitor is truly bezel-less, at least around the top and sides. It is glorious to see a monitor that is frame to frame panel. If you are looking for a multi-monitor setup, with images to scale across monitors, then this device has you covered. The only place where you may be disappointed, and if you are you nit-picking, is the large “chin” at the bottom, but that makes sense since it houses the controls. 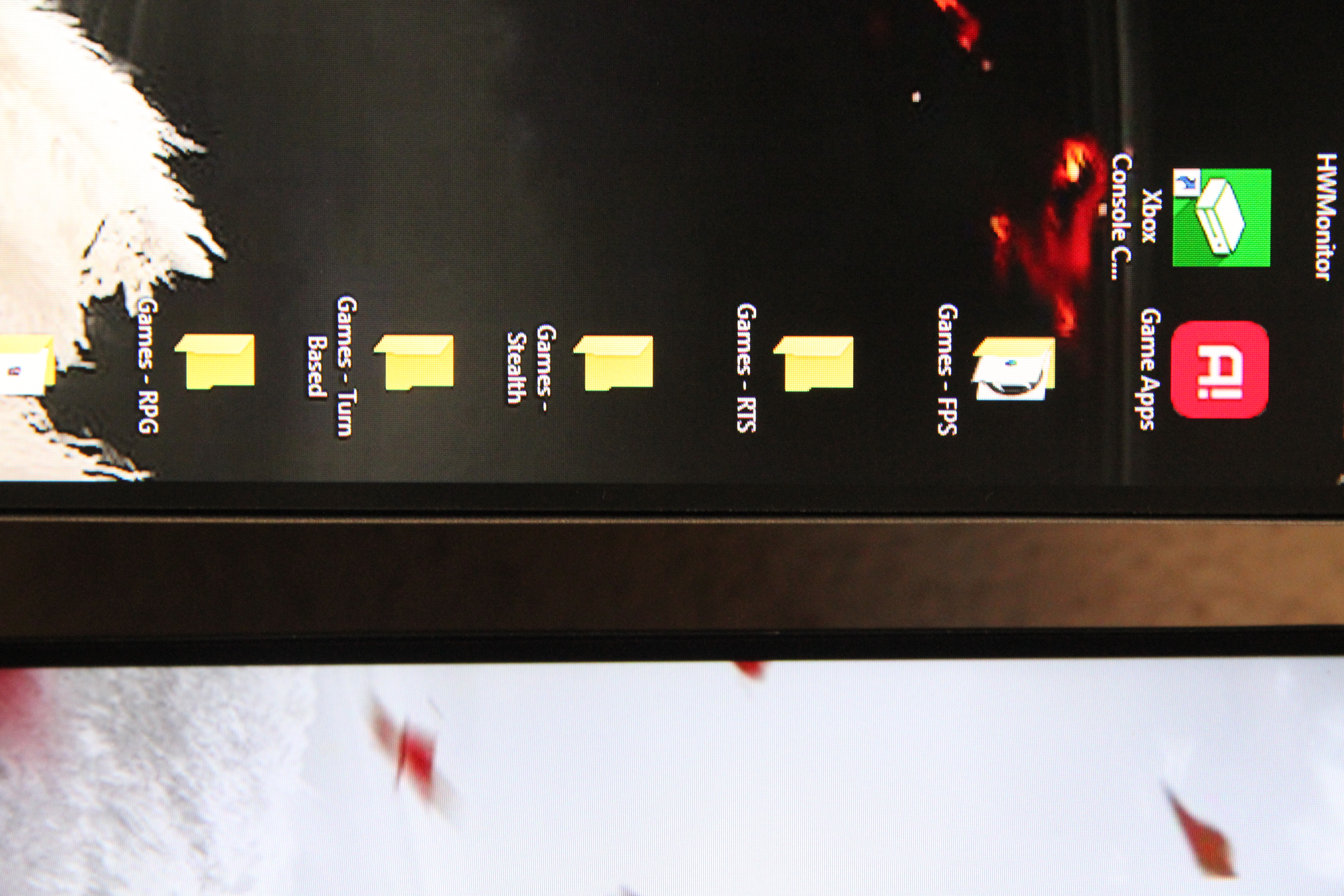 The next thing I always consider is the I/O options, and this AOC monitor is a huge step up from my existing one , which only sports a single DisplayPort, three USB 3.0 ports, and one USB 2.0 port. I would rather have additional HDMI inputs, simply because I see no need for the additional USB hub on a monitor (especially in the rear as that is difficult to get to). I run two PCs on my desk and not having to invest in a pricey KVM switch to use the same monitor on two systems is a must for me. The ability to plug a laptop into the monitor as a third option these days with work from home setups is also a must.

On the back you will find a standard-sized VESA mount should you want to mount this to the wall, but the good thing here is that the mechanism to attach the monitor to the included stand is a simply an insert-and-click mechanism that doesn’t require you to screw the monitor to the stand (as with is with my older AOC). This is becoming the standard across monitor manufacturers and makes the assembly and breakdown of monitors toolless, quick, and easy.

Once you switch on the monitor, you'll have to go into your OS settings to manually lock the framerate to 144Hz. This is where I ran into a slight problem as my laptop only has an HDMI port (does any laptop sport a DisplayPort?). The box - there is no manual - states that 144HJz is supported across HDMI 1.4. Either my laptop does not support HDMI 1.4, or the provided cable does not support it, as the max refresh rate capped out at 120Hz. Unfortunately, I did not have another cable that I knew supported HDMI 1.4 to test if it was the card or the cable.

However, switching to my desktop and the DisplayPort cable allowed me toggle 144Hz and, with the panel overclock on, I could boost that to 180Hz. Now 144Hz is relatively entry-level these days, with most higher-end panels supporting 240Hz and 180Hz slowly becoming the average for mid- to high-tier gaming rigs. However, 144Hz is perfect for most of us and, yes, high refresh rates matter as demonstrated in a couple of videos by Linus Tech Tips I'd recommend you look up.

The monitor settings menu is extremely detailed and granular, allowing you to finetune three user defined settings to your heart’s content. If you cannot be bothered to do that, and just want to get into the action, the panel does include presets for popular game genres, such as FPS, RTS, and Racing. I found these presets to be perfectly adequate and I doubt many gamers will want to mess with the granular settings. I will get into the effect these settings had a little later but, suffice to say, this monitor blew me away when I used the presets.

The panel supports AMDs Freesync standard, making it much cheaper than a G-Sync monitor as it does not require the expensive G-Sync hardware module. However, nVidia has been certifying Freesync panels as G-Sync compatible with quite a bit of success. Sadly, this monitor has yet to be certified and nVidia’s control panel will tell you that. However, you can enable G-Sync and I experienced no issues whatsoever across titles such as HALO: The Master Chief Collection, Doom (2016), and The Division 2. 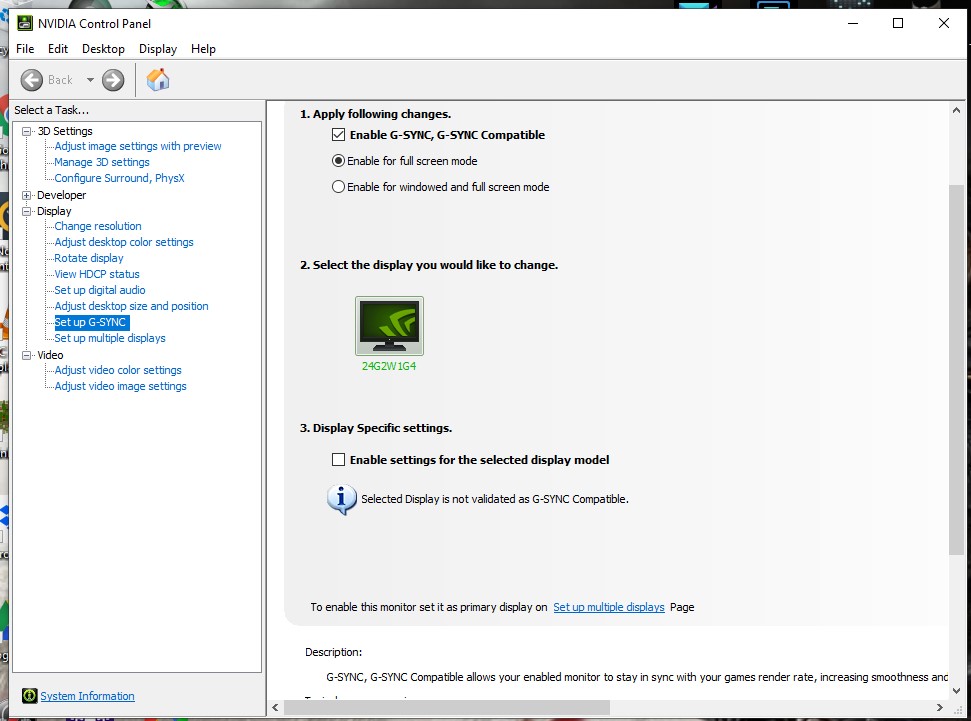 Not G-Sync certified, but it worked just fine

Finally, on the tech spec side, we have the question of HDR support. Now this is a bit confusing as I could find no definitive answer in online forums or in the PDF manual I downloaded, so I must assume that the monitor does not support True HDR as certified by VESA. However, there is an “HDR Effect” setting in the menu and when that is turned on, oh my word does this panel come to life. Words cannot do this justice so please have a look at the picture below. On the right is the AOC 24G2 24 and the right is a Dell UH27 monitor. The Dell was used by a graphic designer for his work and when he upgraded it, I bought it for a song.

With the HDR Game effect setting on the wallpaper (Sony’s Ghost of Tshushima) looks so much brighter and is more eye-catching. The red autumn leaves are so bright, as is the bloom from the setting sun. Up close, sadly not pictured, the details in the character’s face and armour are so much sharper and defined than on the Dell. With the HDR effect off, the wallpaper is as dull, relatively speaking, as the on the Dell. This simple setting, even if not "true" HDR, makes you appreciate the effect that HDR has on games and other media.

The leaves are so red!

All jokes aside - the sub-heading *is* a joke - this display is an enormous upgrade on my current setup. Playing HALO: MCC on this brought Reach and Combat Evolved (yes, I am a bit behind) to life as colours and lighting effects popped like never before. In The Division 2, the lush greens of flora and smoke grenades stood out more than ever before, while the orange flow from your watch just stood out against the night sky so much more than before. Even the character model skin tones looked more realistic than before. The real draw of this monitor is the colour reproduction. It is just so vivid and bright that games truly become that clichéd "feast for the eyes".

As stated earlier, the G-Sync compatibility of Freesync was not a problem, I had no screen tearing or any other issues with this panel. The same goes for refresh rates, the panel held up well and I never once thought that the refresh rate dipped leading to screen tearing. I will say though, and this may be my ancient eyes, but on menus and especially the Windows taskbar, text sometimes looked too sharp, almost to the point where I had to lean in to read it. I am not sure why it felt that way, but it was not too distracting.
As for resolution, yes, it is “only” a 1080p panel, but a 1440p or 4K panel would be far more expensive. At the current retail price of around R5,000 that does seem a bit expensive, however given the expansive I/O and performance, I think that the price is very good especially when you see the prices of competing monitors from MSI & Asus et al.

In addition, my current setup of a GTX 1070 and GTX 1080, in my laptop and desktop respectively, would sacrifice that high framerate rendering at higher resolutions. The framerate is not locked near 4K, so for stability I would have to settle for 1440p/60FPS to get closer to 100FPS near maximum settings, and depending on the game, over 100FPS at 1080p. Having experienced high refresh rate gaming with my other monitor, I would rather prioritise framerate over resolution. However, if you have a 20-series card or are going to sell a kidney for the upcoming 30-series cards, then you may want to see what AOC has in the 1440p and 4K range - but be prepared to spend a lot more money.

The AOC 24G2 is a great monitor for any gamer who values smooth framerates and image quality. The colour reproduction, along with the Freesync capabilities, make it a no brainer for anyone with the cash to buy a new monitor now. My small criticisms of this panel relate to the price - R5 000 is a lot of money to spend especially these days - and the size. A 24” panel is a decent size for desktops, but 27” has really been the standard for a fewy years now. AOC does sell the 27G2 and it's “only” R1 500 more than the 24G2. I do think that the extra R500/inch is worth it, but R6 500 is a lot of money if you are on a strict budget. So, if you are on a budget and want a responsive monitor that has fantastic colour reproduction, this is a monitor you cannot go wrong with.
9

G-Sync capable even though not certified

Coffeboy
Thanks man , looking forward to it

Magius
Sorry not HDR support but that HDR Effect because I couldn't confirm if that was True HDR or not. Whatever it is, it is bloody fantastic.

Having said that wait a few days, another what I think is going to be fantastic monitor review is coming up and that may sway you.

Magius
With HDR support and if you play at a desk or sitting pretty close to the monitor then yeah I would. The HDR Effect is fantastic. However, if you primarily play on the couch I would look around for a 4K TV that supports HDR, sadly my 4K panel does not as I have seen some 50" panels for around R7k-R8k and that will "future proof" you to an extent for next gen.

Coffeboy
would you suggest it for a Ps4 1st gen? 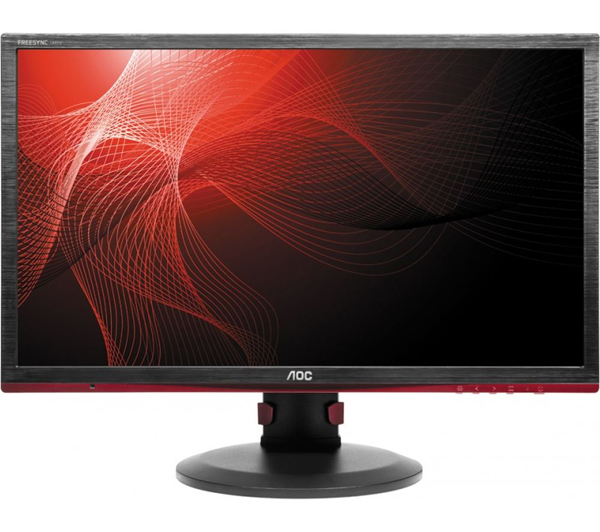