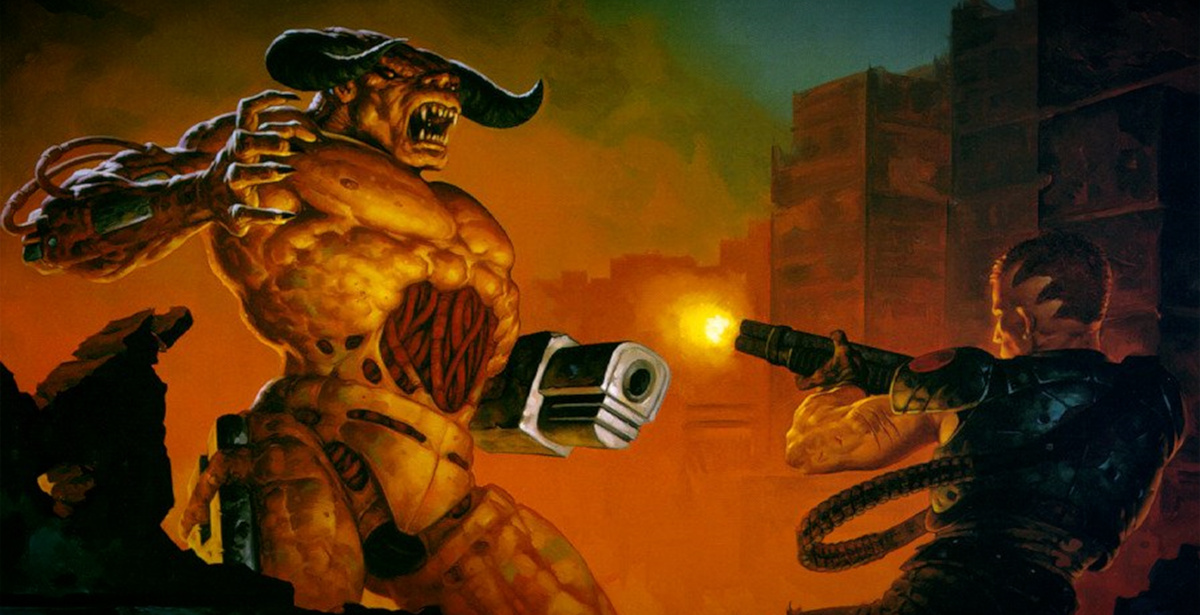 Last week saw the launch of the critically-acclaimed DOOM Eternal, with iD Software managing to expand upon the foundations of the already excellent part-sequel/part-reboot DOOM 2016, in the same way they did with DOOM 2 back in 1994. They represent a return to the days of unabashedly fun arena-shooters, which ditch any pretense of realism and authenticity for pure, mechanically-satisfying fun backed up by stylish visuals and an amazing soundtrack. Despite EA and Activision continuing to churn out by-the-numbers military shooters (which remain inexplicably popular); the new DOOM games – along like MachineGames’ Wolfenstein: The New Order and Wolfenstein II: The New Colossus (and even Wolfenstein: Youngblood to an extent), Respawn Entertainment’s Titanfall 2, and even the less successful Rage 2 (id Software/Avalanche Studios) – remain the most memorable first-person shooter experiences of this generation.

With that in mind – and upon realising the original DOOM is now 27-years-old – I figured it would fun to reinstall them, give them bash, and reminisce. For the first part, I’ll cover what could probably be considered as the “classic-style” DOOM games (in their vanilla forms at least).

I’m going cheat and lump these three together as despite a few fantastic enhancements introduced with the release of DOOM II (more complex levels, more challenging demon variants, and the super shotgun), the core gameplay and technology powering them is near-identical and, if you’re coming into this series for the first time in 2020, you’d think they were just cheap expansion packs for the base game. Despite having experienced Wolfenstein 3D a year before, DOOM (1993) was a technical marvel.

Perspective-correct sprites gave the illusion of a 3D environment. Textures were sharp and gruesomely-detailed for the time (just ignore the rubbish skyboxes). Performance was a steady 35fps, exactly half the 70Hz refresh rate of most CRT monitors at the time. Monster sprites were detailed and fluidly-animated. The weapons both looked and sounded incredible when fired (and I’m sure the shotgun pumping animation led to the modern fixation on stylish reload animations). Enemies would collapse into bloodied, dismembered corpses once you’d riddled them with enough bullets (or explode into a theatrical shower of gore). The MIDI-style music tracks remain catchy and iconic, always given them player something to bob their head along to whether exploring or in the midst of a firefight (to this day I find myself randomly humming “The Imps Song” from E1M2). It was as close as we’d come to gaming nirvana. 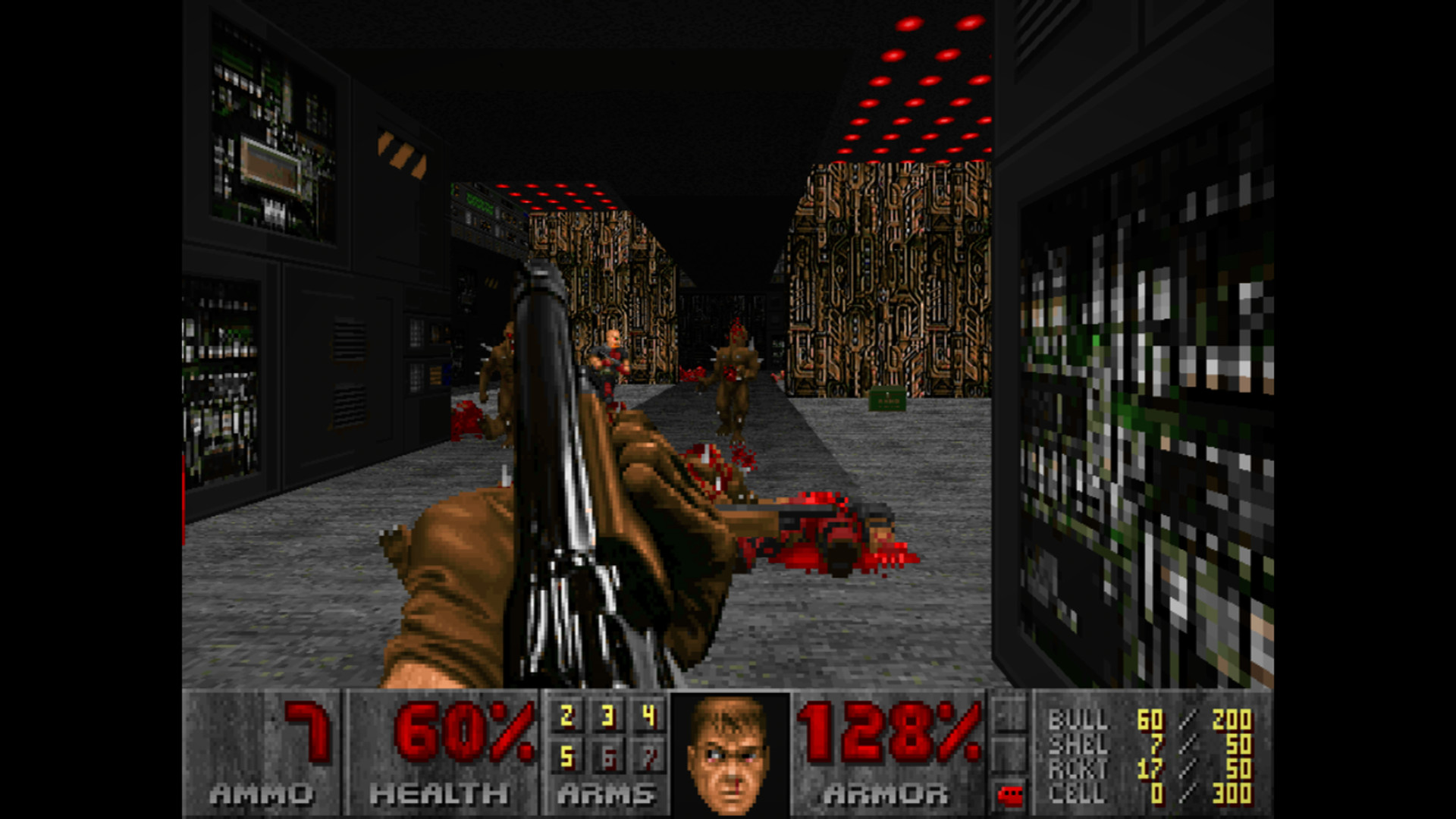 I could happily replay several classic DOOM levels all day, just for the carthartic shooting and excellent music loops. Also that shotgun pump animation... so good.

Played today, it’s still easy to recognise how the simplistic first-person shooter controls and core gameplay loop served as the foundation of almost every subsequent FPS (with no need to aim up/down owing to the pseudo-3D environments, it plays great with a gamepad). Gameplay is blisteringly fast, with increasingly large and diverse hordes of demons impeding your progress, requiring the player identify and dispatch priority targets with the optimal gun. You move through acts that consist of visually- or thematically-similar levels strung together, narrative is just the occasional wall of text (in short: demons have invaded from hell, you’re the only survivor, kill them all), and progression is both simplistic and repetitive – boiling down to coloured keycard hunts and finding obscure switches or portal. 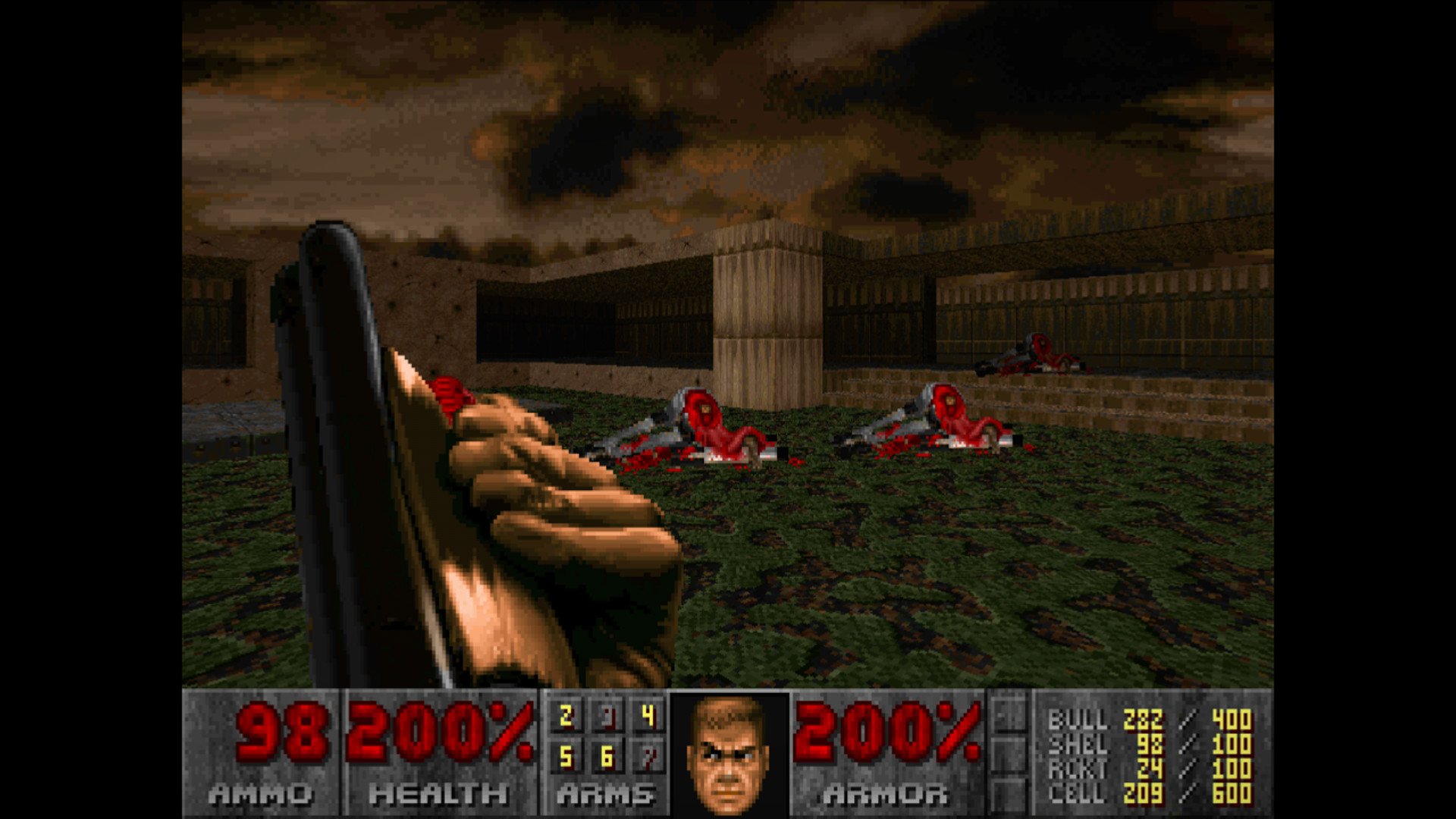 The Super Shotgun is easily the most iconic weapon to come from the DOOM IP.


However, these elements only existed to provide a little context to those that wanted it, and quiet exploration served as a breather from the relentless pace of combat. Despite the focus on combat, creepy ambient sounds, darkened areas, the distant groans of your foes, and the chance of finding the odd solitary demon hidden around a corner could make it a tense experience between firefights. Although you were unlikely to notice it, DOOM’s audio technology included a rudimentary sound-detection mechanic for the AI, which allowed them to register the player and move between rooms if the doors were open. 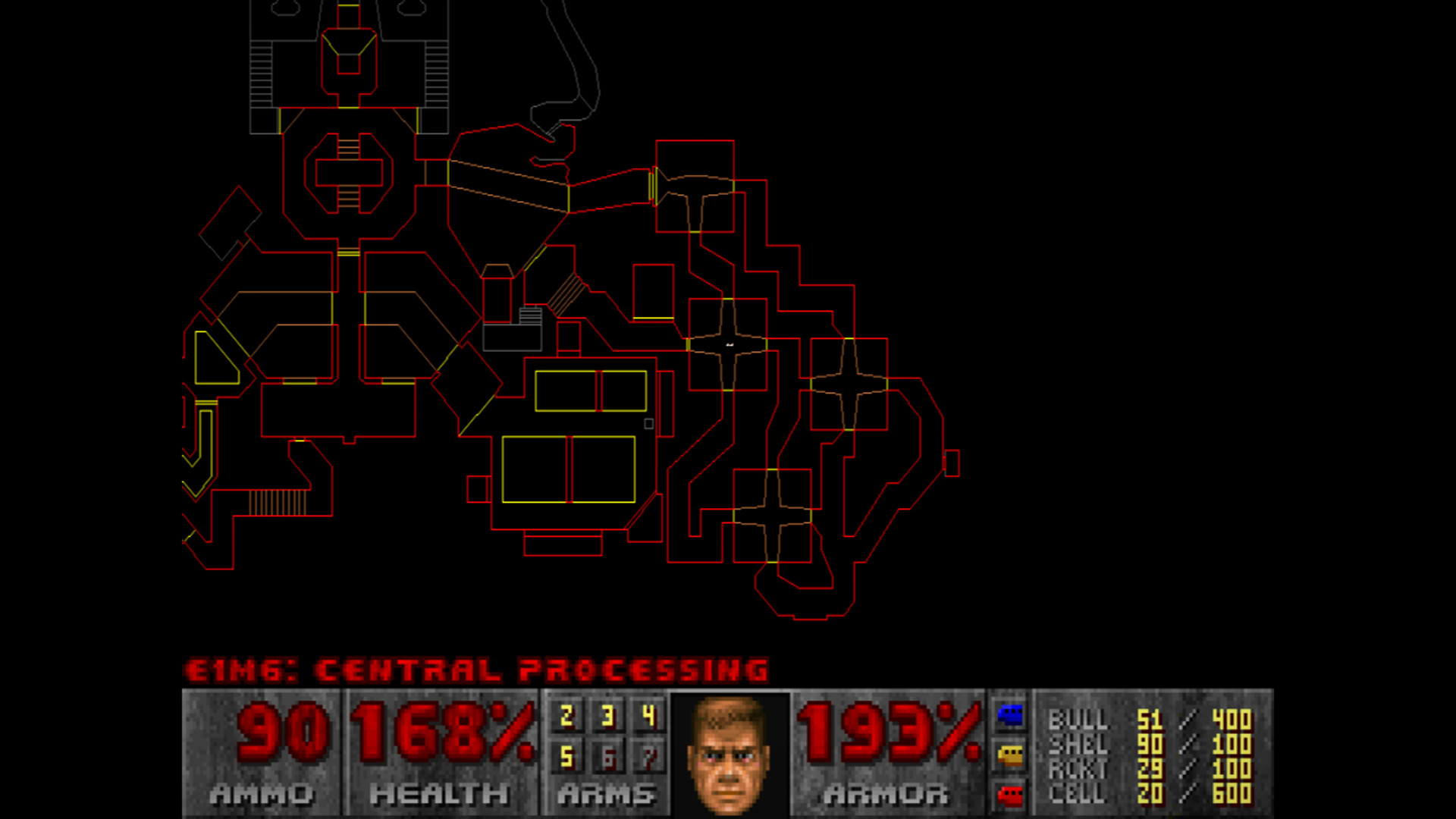 Where the hell am I going? The levels in the classic DOOM games often feel as if they were designed in isolation, and then strung together into acts later. Some are truly memorable but far too many are labyrinthine nightmares.


As far as negatives go – and I think these held true at the time of release – the level design is often labyrinthine, the auto-map is awful to navigate when you’re looking to find a damn door that matches your freshly-acquired keycard, and the secrets are of the click-on-every-wall variety. These secret rooms are full of bonus health or armour, powerful weapons you normally find later in the game, or monster ambushes but if you start hunting for each and every one, they ultimately detract from the pacing (a recurrent pattern in hindsight). That said, the classic DOOM games still shine as they provide the player a real sense of achievement as they learn what to target, and with what weapon, to rapidly clear out rooms of demons while taking minimal damage.

It’s no joke to say DOOM (1993), DOOM II: Hell on Earth (1994), and Final DOOM (or the map-packs it contained) can be picked up on almost every platform that’s existed since 1993, from the MS-DOS versions on GOG, to the recent ports on Xbox One and PlayStation 4. I’m not even going to touch on modding in this article as that deserves several thousand words alone and someone with far more experience than I have. If you quickly grow bored of the vanilla experience, there are hundreds of MegaWAD map-packs and dozens of complete overhauls available for free (some of which might come to the current-gen ports as SIGIL and the Final DOOM map packs have).

Initially released exclusively for the Nintendo 64 in 1997, DOOM 64 completely passed me by until the remaster from Nightdive Studio’s released simultaneously with DOOM Eternal. Despite keeping several sprite-based elements – the enemies, weapons, and several environmental props – DOOM 64 was the first game in the series that sported truly 3D polygonal environments. This is used to great effect with levels full of moving parts, deadly traps, simple terrain deformation, and simply higher geometric complexity everywhere you look. A combination of semi-transparent polygons is used to represent light shafts, along with baked-in shadows that do a great job of emulating increased lighting complexity. 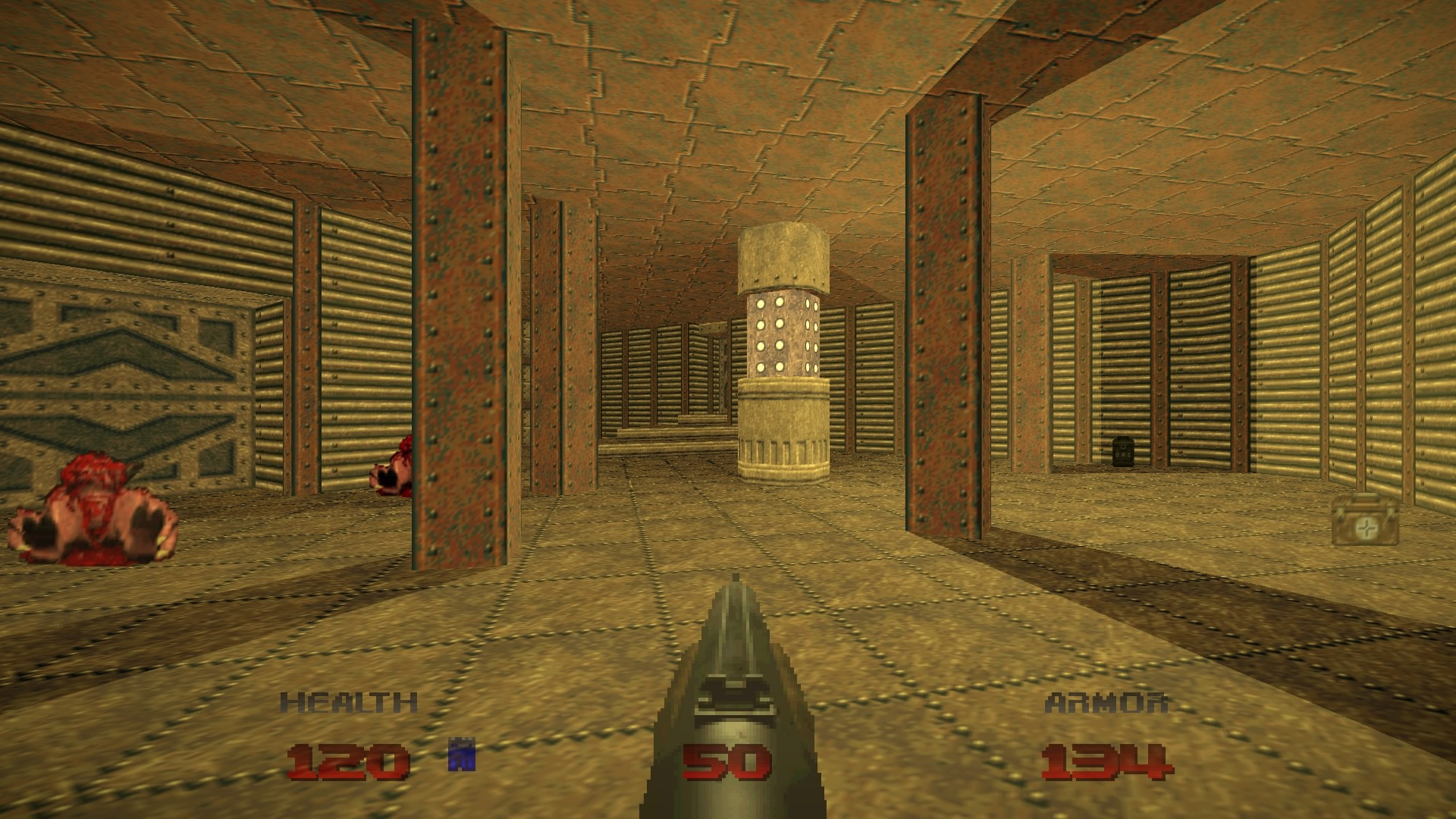 The opening levels do a great job of showing off the new 3D environments and lighting effects (looking more than a bit like Quake now that I think of it).

Despite mostly having the same arsenal and bestiary as DOOM II (there is one insane new super weapon and a unique boss), the aforementioned sprites are of much higher resolution than the previous, packed with more details and more animation frames. Of all the classic DOOM games, there’s no doubt DOOM 64 is the most visually impressive, especially when it first released. Combat, however, sticks true to the orignal formula and remains as fast and frentic as ever. It just looks so much better as your intricately-detailed weapons shred gruesomely-detailed demons. 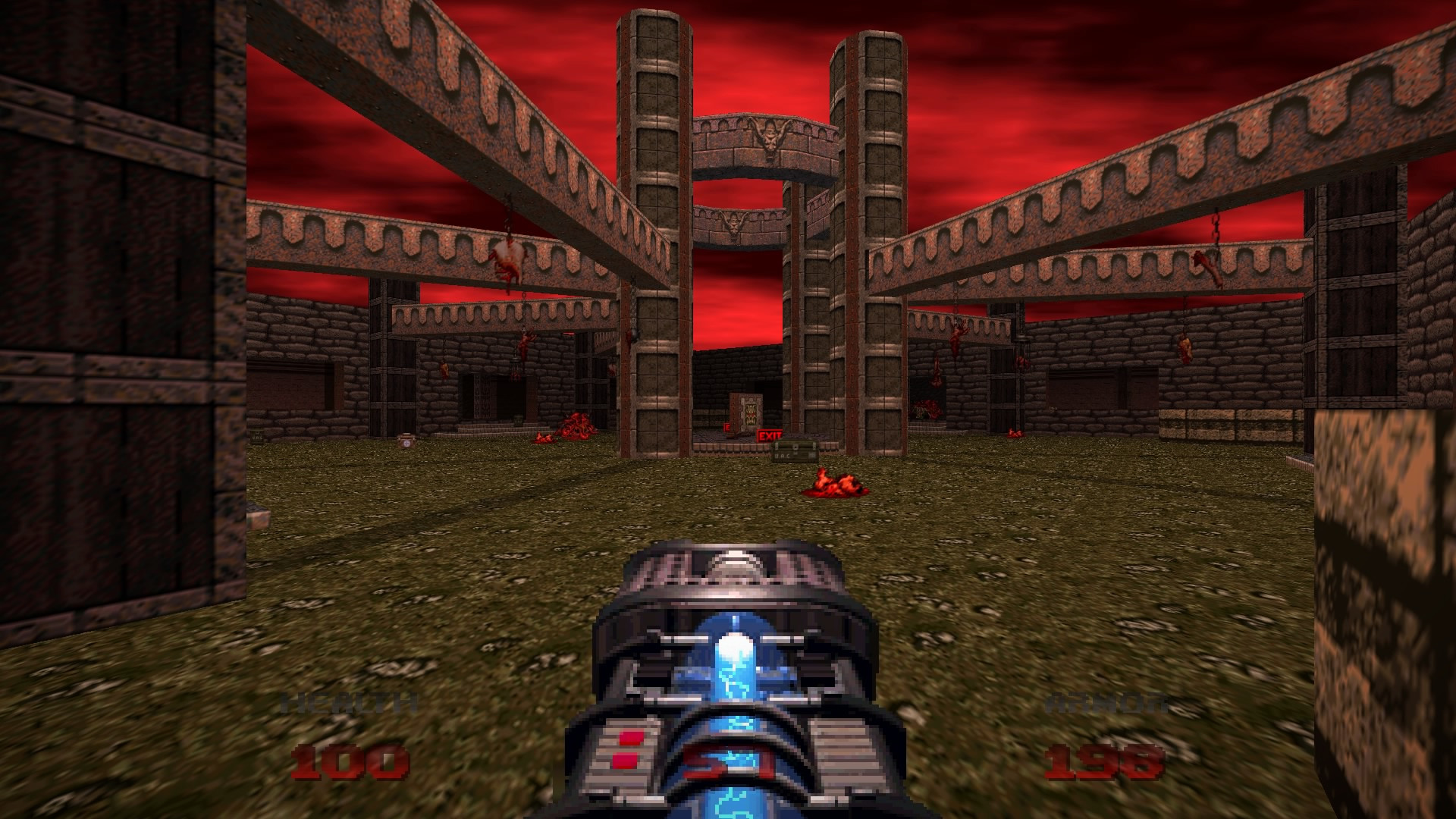 Hell looks a lot prettier this time around (minus those skyboxes), while the weapon sprites see a massive boost in detail.

However, as a classic DOOM experience, you’re still looking at the same core gameplay loop backed up by a simple narrative, repetitive key or switch hunting, and click-everywhere secrets (though the new act released in the remaster reinforces the link to the DOOM 2016 lore). From my experience playing for the first time in 2020, the greater complexity of each level (rooms can actually exist on top of one another thanks to the true 3D engine) coupled with an equally unhelpful automap, make key and switch hunts even more infuriating. 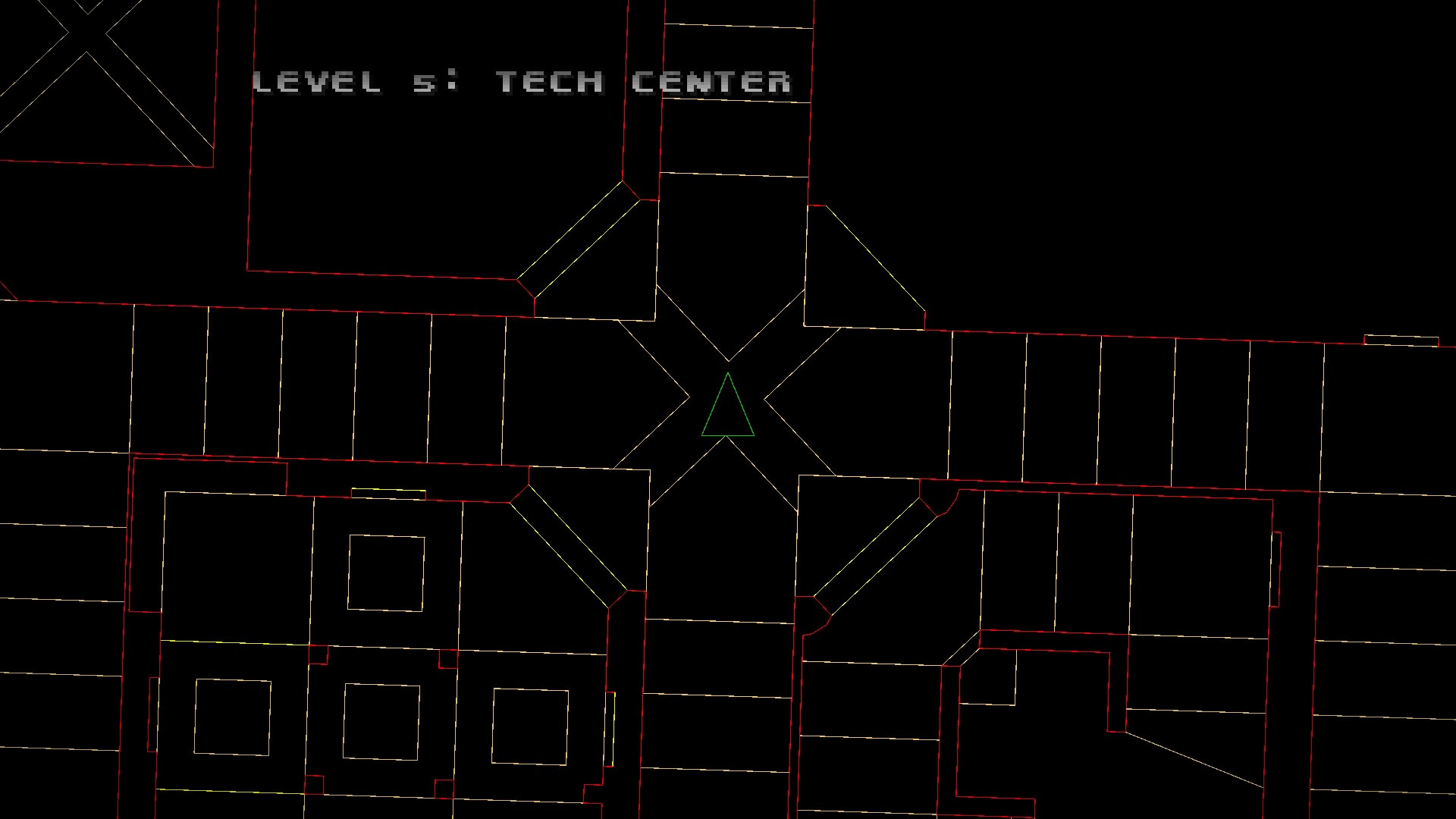 ... and I still have no damn idea where I'm going.

Later levels would often see me going off on a lengthy trek to flick a switch, before I’d spend several minutes looping back past every door or portal I could remember to see what opened. Personal gripes aside, one objectively weaker aspect is the lack of an electronic or industrial rock soundtrack, replaced instead with creepy ambient tracks that enhance the horror elements and atmosphere when exploring but fail to enhance firefights.

The good news is you no longer have to hunt for an original N64 copy or ROM to emulate and can pick up the DOOM 64 remaster cheaply on Steam, Xbox One, and PlayStation 4. All the classic DOOM games are great in their own right but I'd pick DOOM 64 if you're only gonna play one. 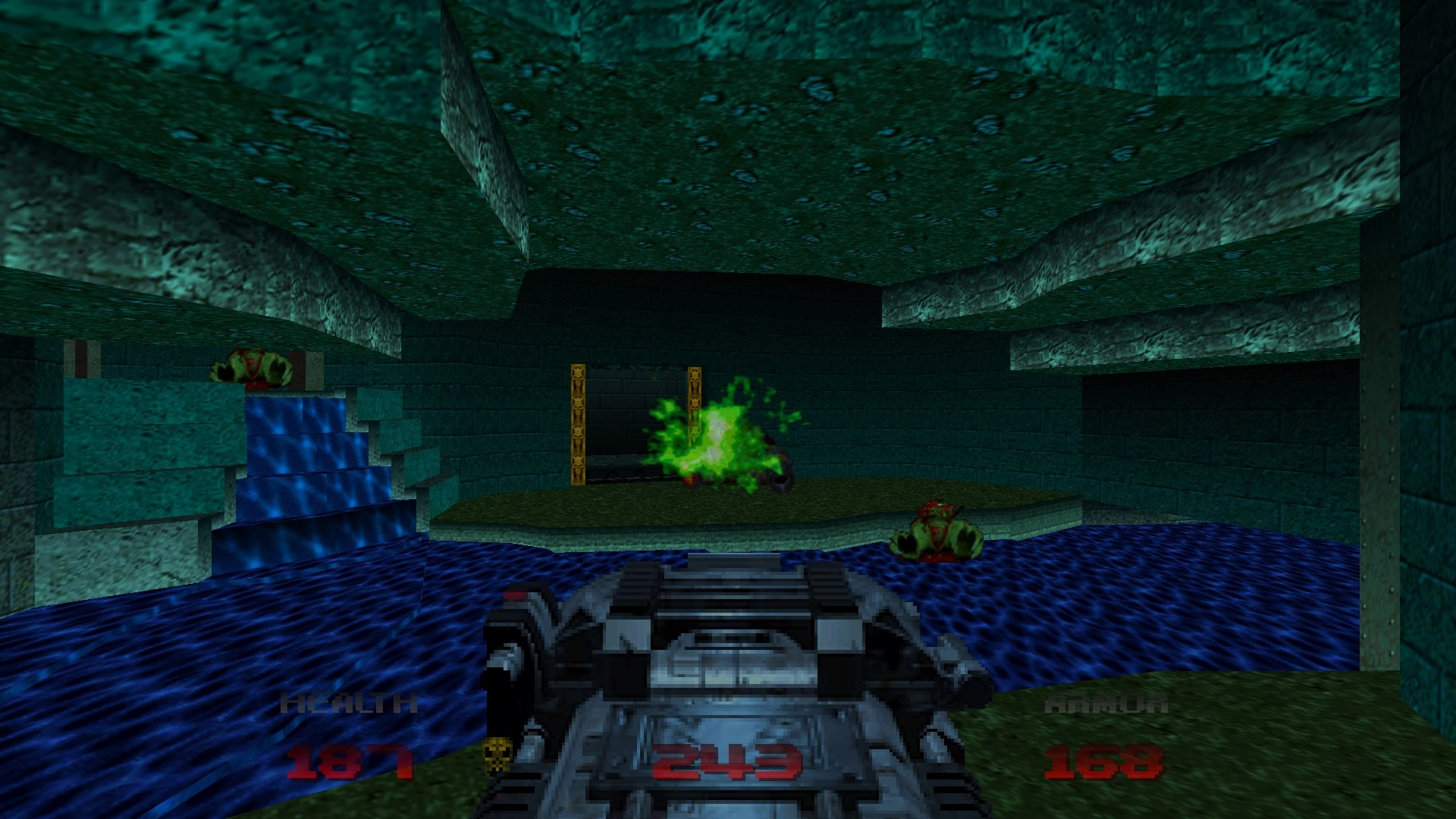 It's hard to remain annoyed with DOOM 64's dated design when it gives you the BFG in the second of four acts.

In Part 2, we’ll take a look at the dramatic shift in direction the subsequent DOOM games took, with lengthy gaps between sequels that kept fans waiting for decades.

Lurch
@Blaze - Duke Nukem and the Build Engine probably deserve as much recognition for all the great games that emerged afterwards (Shadow Warrior and Blood especially) but id Software beat them to it by 2 years.

Blaze
My first brush with Doom was Doom II way back on my grandfather's dusty PC. Back then, I think I gravitated more towards Duke Nukem at the time but I've grown a stronger appreciation for Doom over the years. That and Duke Nukem Forever sucked while Doom 2016 kicked a**