176
February 18 2019, 10:21am
Russian Doll on Netfix: brilliant series , a breath of fresh air to be honest . NY at its best and short and sweet and highly entertaining. a must watch !
Snow

10006
February 18 2019, 10:23am
I caught a few mins of Umbrella Academy when DP was watching it and I think I might jump in too. I heard They Might Be Giants on the soundtrack and it upped the coolness factor by over 9000.
Scottie

Umbrella Academy - skipped through the last few episodes, show got very boring and felt too dragged out, should have been 5-6 eps long not 10.
DEATHGIGAS

2999
February 28 2019, 9:19am
Done with Umbrella Academy…what a series and that last episode was insane, no matter what they did, they just could not stop it…

Wonder how old they will be for the next session … 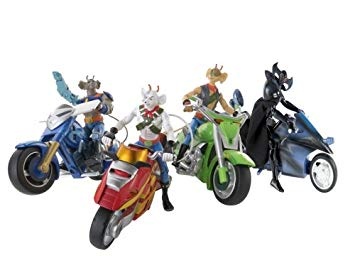 12146
March 8 2019, 8:36am
Fell behind with the Marvel Netflix shows. So started from the beginning again, & watched all of them back to back these last few months.
From best to not so good.
DD
LC
JJ
Punisher
Iron Fist
DD is the best of the lot, no argument there.
Punisher should have been much higher up. But the first season was VERY disappointing. Season 2 was WAY better at least.
Iron Fist second season was better, but still not great. & what the hell was up with that ending?

The Defenders was a bit of a let down.
Now just the wait for the final JJ season 3, & last of the Marvel Netflix shows

7324
March 12 2019, 9:00am
Hollywood Weapons: Fact of Fiction S1&2 - fairly interesting look at whether scenes mirror true life. Fun fact: Deadpool could deflect a bullet with a katana with the ricochet killing someone. Inane host though.

12146
March 13 2019, 9:05am
Scream Queens season 2
Pretty much the same plot as the first season. But still a lot of fun to watch, surprised it got canceled.
Best line in the season...
For Halloween guy dresses as an accident victim.
"Who are you supposed to be?"
"The Batman vs Superman script."
"But you look like a bloody mess?"
"Exactly."
BURN!!!!